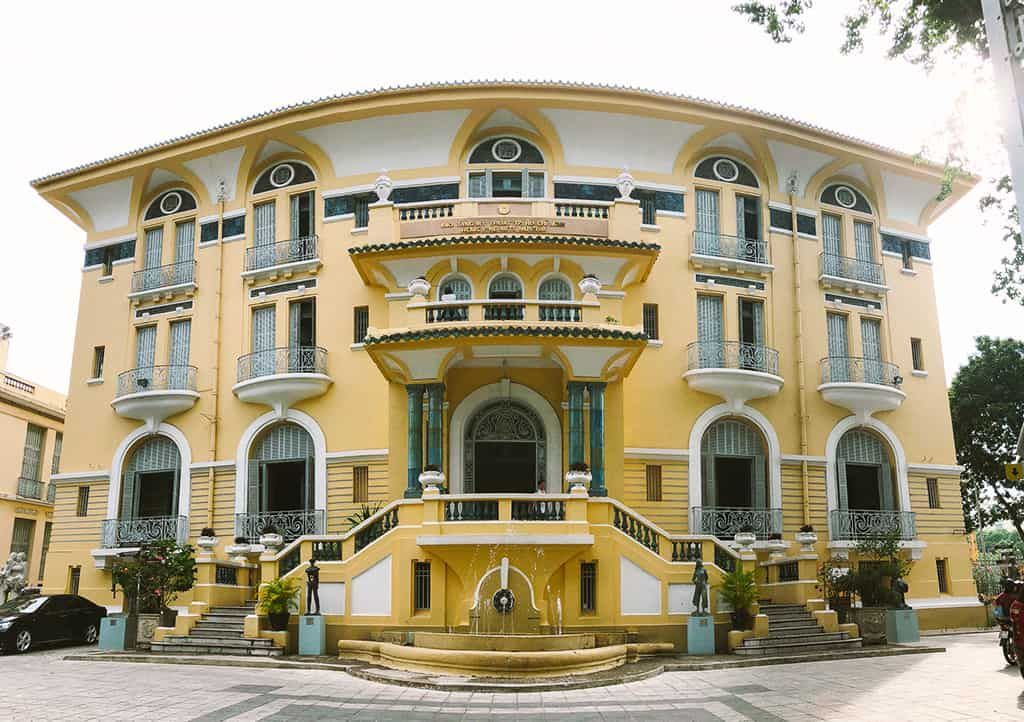 While Hanoi attracts tourists by the values of "thousand years of civilisation", Ho Chi Minh City makes people impressed by its vibrant, modern and "colourful" life. Nevertheless, there are still places featuring historical values that create a very unique attraction there.

Ho Chi Minh City has two distinct types of weather: rainy and dry seasons. The rainy season is from May to the end of November with sudden rains, so visitors should bring umbrellas and raincoats when traveling to this city during this time. The dry season starts from December to April with hot weather (ranging from 25-35 degrees Celsius), but there is not a big temperature difference between the two seasons. 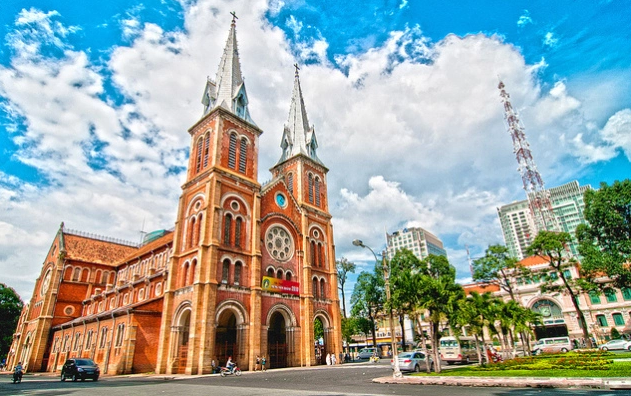 Considered as a symbol of Ho Chi Minh City, Ben Thanh Market is a destination attracting both domestic and international tourists. The market is located among the streets of Phan Boi Chau - Phan Chu Trinh - Le Thanh Ton - Le Loi in Ben Thanh Ward, District 1. The place is vibrant and busy both day and night with a multitude of food and souvenirs for visitors. 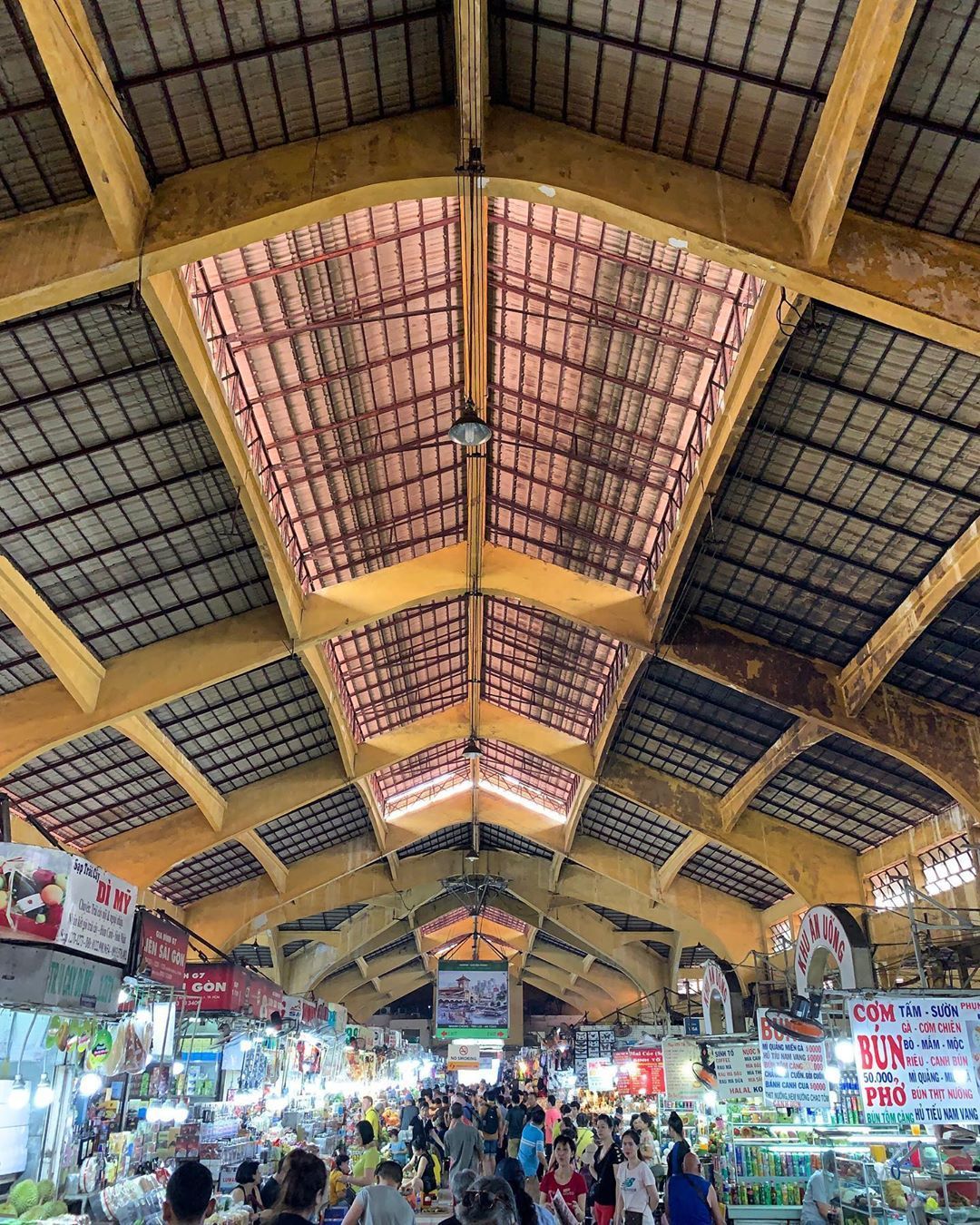 Ben Thanh Market has been relocated twice, so people often call it “Old Market” and “New Market” to differentiate them. Old Market was built in 1790, based on an old market in Saigon, located on the banks of Ben Nghe River, next to Gia Dinh citadel. Later on, the market was burned down during an attack on Gia Dinh citadel in February 1859. In 1860, the French rebuilt Ben Thanh market on the foundation of the Old Market. By 1911, Old Market was badly degraded and the market was cleared to build a French treasury. The new Ben Thanh Market was built in 1912 in the current position and maintained to this day. On the sides of the market, there are reliefs symbolizing the typical products of the South such as a stingray with bananas (West gate), a duck with bananas (North gate), and a cow and a pig (East gate), cow head with carp (South gate). 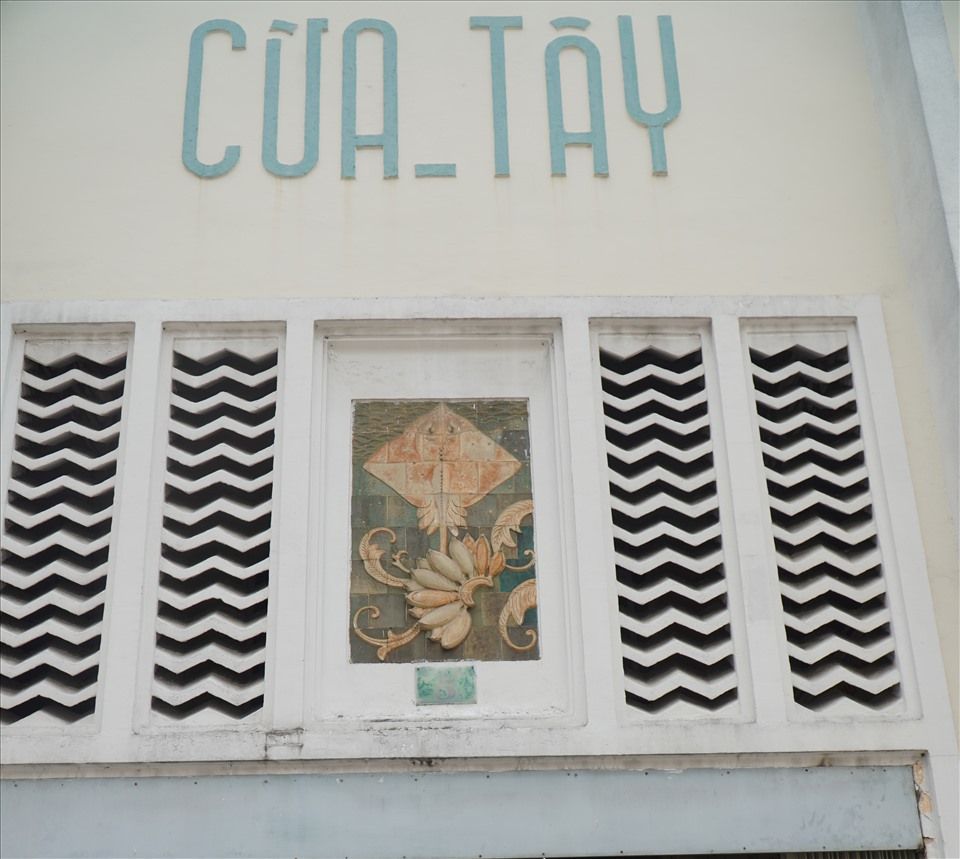 The relief of a stingray with bananas (West gate) of Ben Thanh market. Photo: laodong 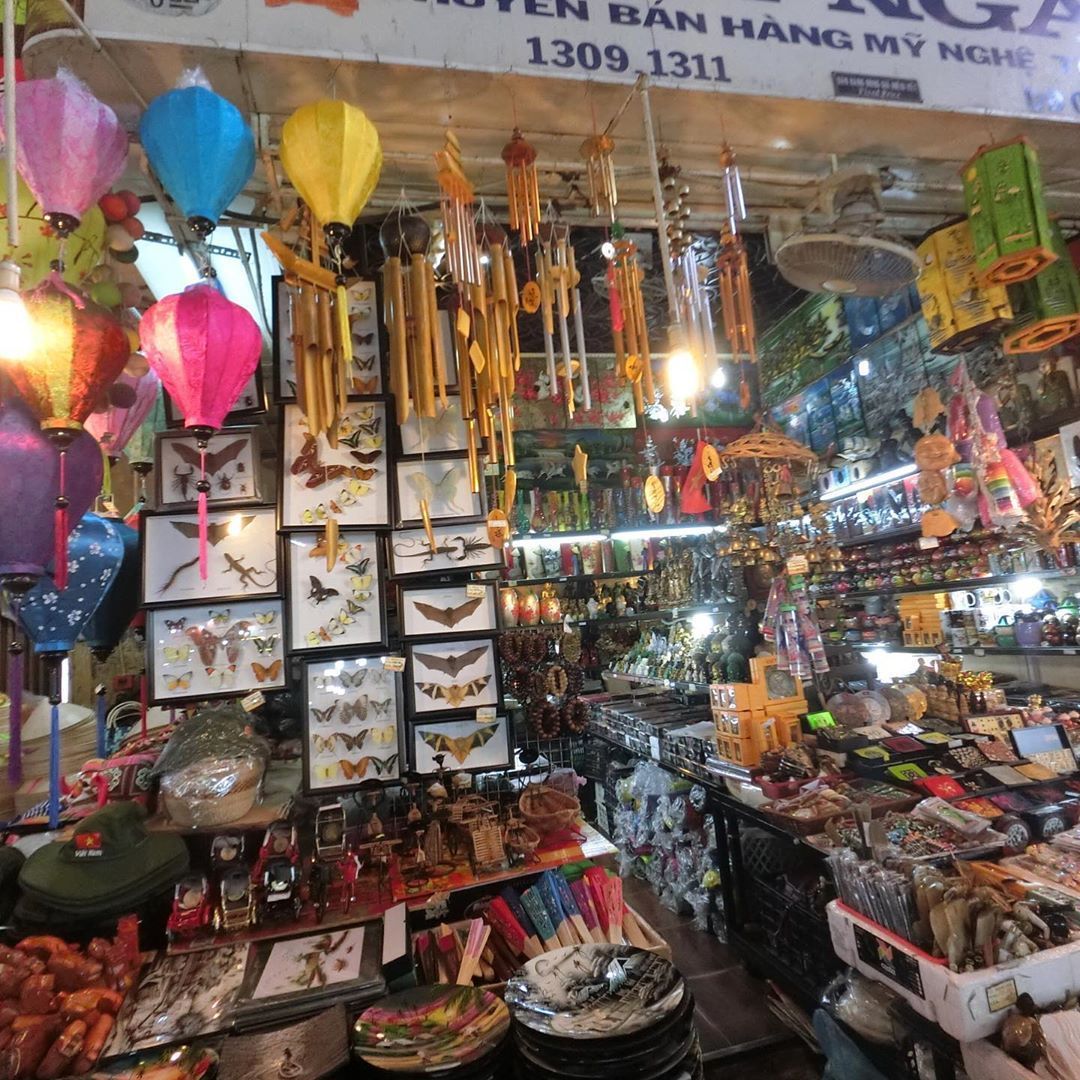 Small businesses start trading activities from around 4am, but the appropriate time to visit the market is around 7am when all stalls are open. The market closes at 7pm and then the shops outside the market will be opened.

There are about 1,500 stalls with a variety of items from popular to high-end, and from domestic to imported goods. The market is divided into separate stalls such as souvenir shops selling gifts such as necklaces, earrings, wallets, embroidered towels and keychains; fashion stalls selling various designs from traditional to present ones; jam stalls offering dried products such as ginger jam, orange jam, coconut jam, squash jam, crispy persimmon, dried chicken, dried fish; and food stalls offering typical dishes of the South such as mixed rice paper, Hue bloating fern-shaped cake, snail dishes and so on. 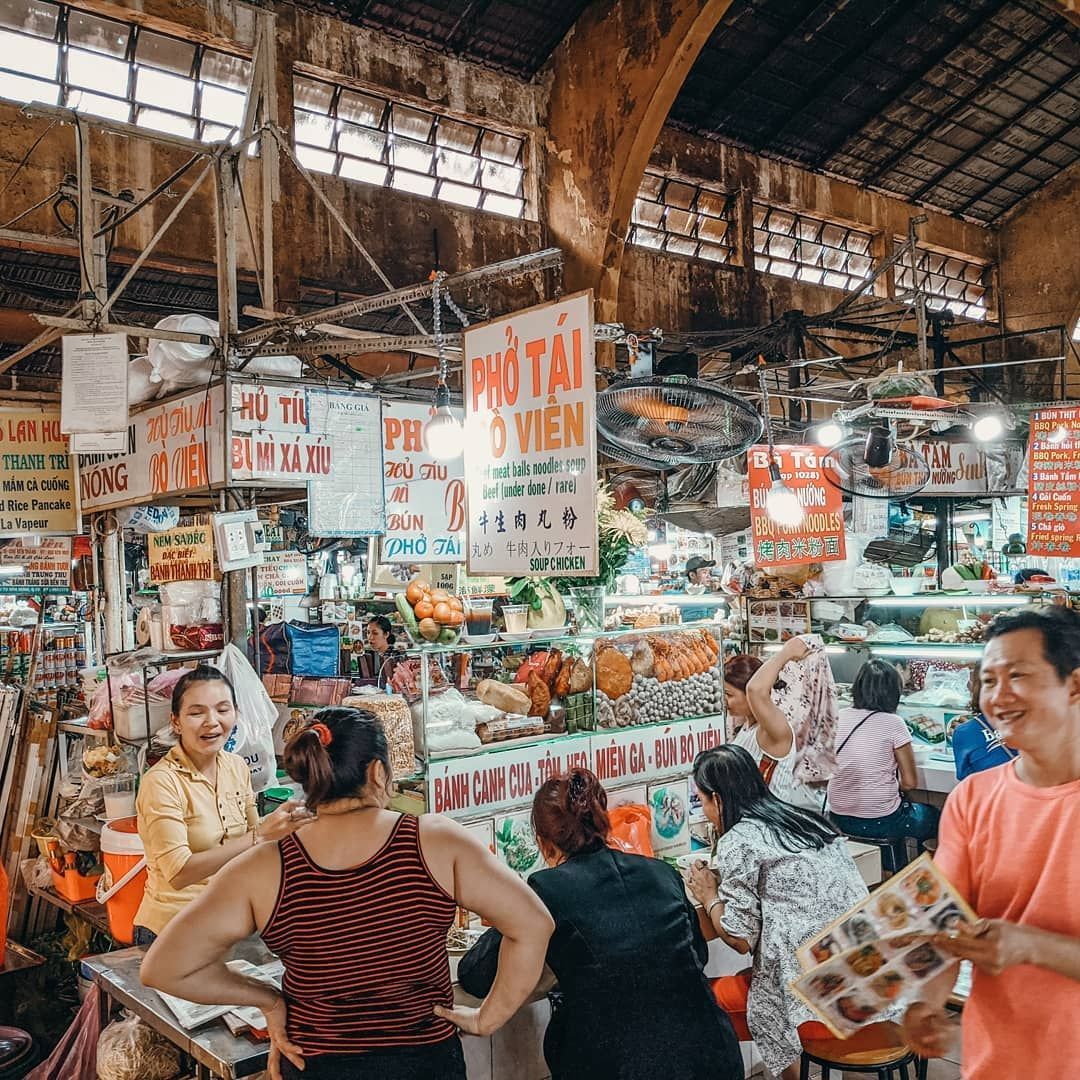 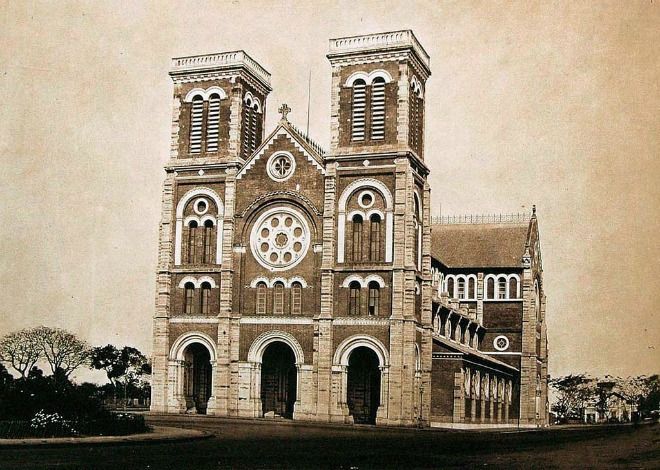 Notre Dame Cathedral in 1822 without the bell tower. Photo: 2saigon

After taking Saigon, the French colonialists set up a church to celebrate Mass for Catholics. The first church was established on No. 5 street (now Ngo Duc Ke street) in 1863 by wood. In August 1876, the Governor of South Vietnam Duperré held a contest to design the new church and the work of architect J. Bourard was selected. After that, the church was rebuilt at No.1 Paris Commune, Ben Nghe Ward, District 1, Ho Chi Minh City. Materials used in the construction, such as cement, steel and screw, were brought from France. Notably, the exterior of the church was built by bricks from France, which still retain a bright pink color now without being painted. 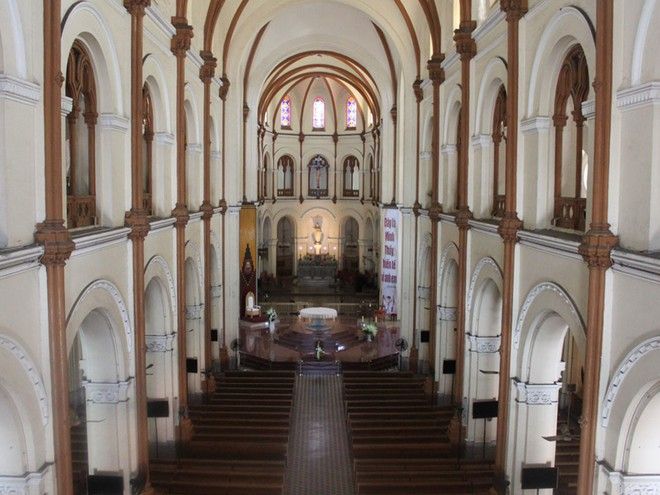 The space inside the church. Photo: thanhnien

The architecture of the church is the combination of modified Roman with Gothic styles. The building is symmetrical with the decreasing height to the back. The highest building is the bell tower in the front, leading to the main hall, the harem of the choir and chapels, and the prayer room. The architecture and decorative details are based on the dignified and elegant Roman and Gothic styles. The foundation of the cathedral can withstand 10 times the load of a church's architecture. The cathedral inside is 133m long and 35m wide with a capacity of up to 1,200 people. The altar of the Holy is made of monolithic marble with the picture of six angels carved into the stone to support the altar surface. The pedestal is divided into three cells, each of which is a sculpture describing different events. On the wall, there are 56  colorful glass windows with descriptions of characters and events in the Bible, but interspersed with many attractive oriental motifs and images. This creates great lighting effects for the place, creating a solemn ambience. 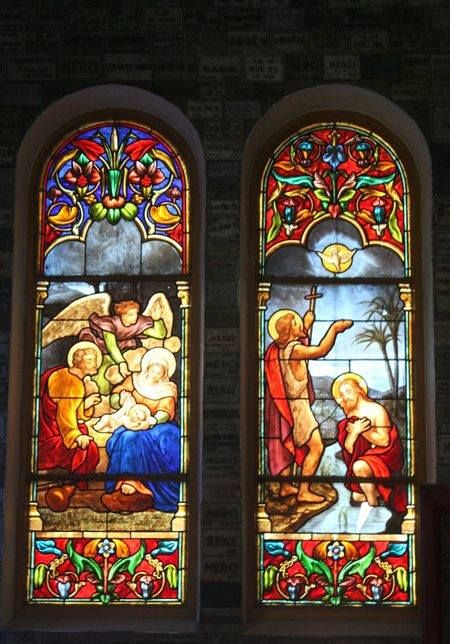 With its impressive architecture, Notre Dame Cathedral Saigon was voted as 1 of the 19 most beautiful churches in the world by Business Insider (USA) by 2020. 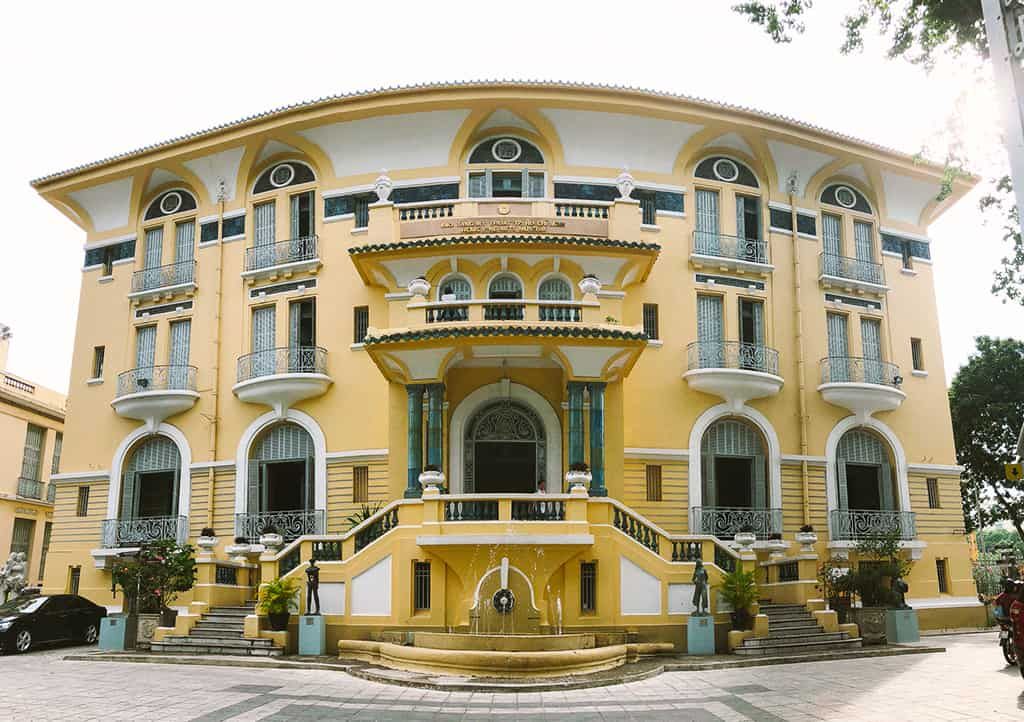 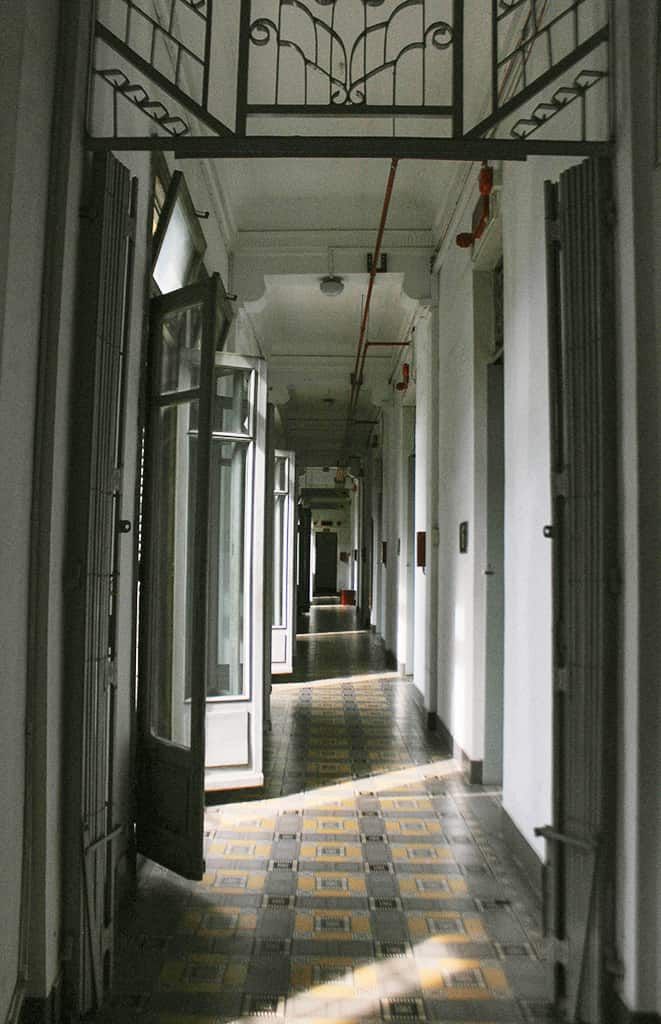 The floor is tiled with diverse designs and patterns. Photo: blog.traveloka

Ho Chi Minh City Museum of Fine Arts has a harmonious combination of Asian and European styles with an area of 3,514m2. The roof is constructed with red yin and yang tiles, and glazed tiles with a green border in an East Asian style, while the windows are tiled with colorful glass with European art style. The floor is tiled with many different designs and patterns, especially the stairs are made from luxury marbles. This is also the first project in Saigon to be put into use with an elevator. At that time, the elevator was made of wood and decorated and carved as an ancient palanquin in China.

The artifacts inside the museum. Photo: blog.traveloka.com

The highlight of the building's architecture is the main door on the first floor with high foyer, large roof pillars and stairs on both sides. The main door is arched, attached with an iron pattern with the letter H.B.H stylized after Mr. Hua Bon Hoa's name. At the back gate of the museum is a stele engraved with the names of the owners of this building, mostly members of the family of Hua Bon Hoa.

Ho Chi Minh City not only attracts tourists thanks to its cultural and historical destinations, but it also has delicious dishes that create its typical culinary features.