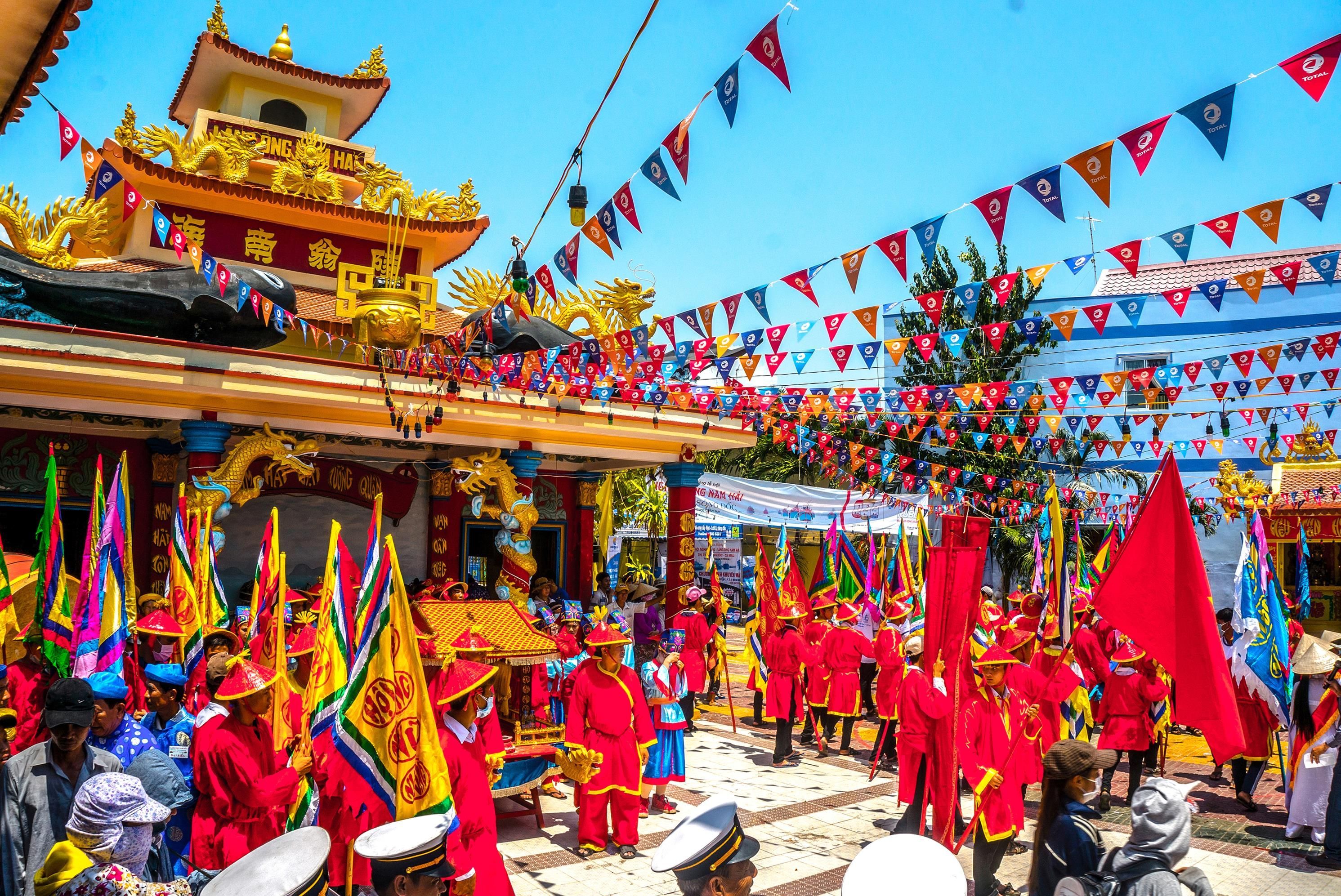 Four unique festivals featuring regional cultures in Can Tho

Besides the rustic natural beauty, cultural festivals in Can Tho are factors making this land unique as compared to other areas. The following four festivals have attracted a large number of visitors coming to this province

Nghinh Ong is one of the biggest festivals of fishermen in the southwestern region in order to pray for a year of nice weather, safe trips to the sea, and an abundant harvest of fish and shrimp. In these areas, people have a custom of worshiping Ong fish (Whale), or "Nam Hai General”, so they established many famous temples such as Ong Nam Hai (in Lai Son commune, Kien Hai district, Kien Giang), and Lang Ong (in Dong Thi Hoi, Long Hung, O Mon, Can Tho). 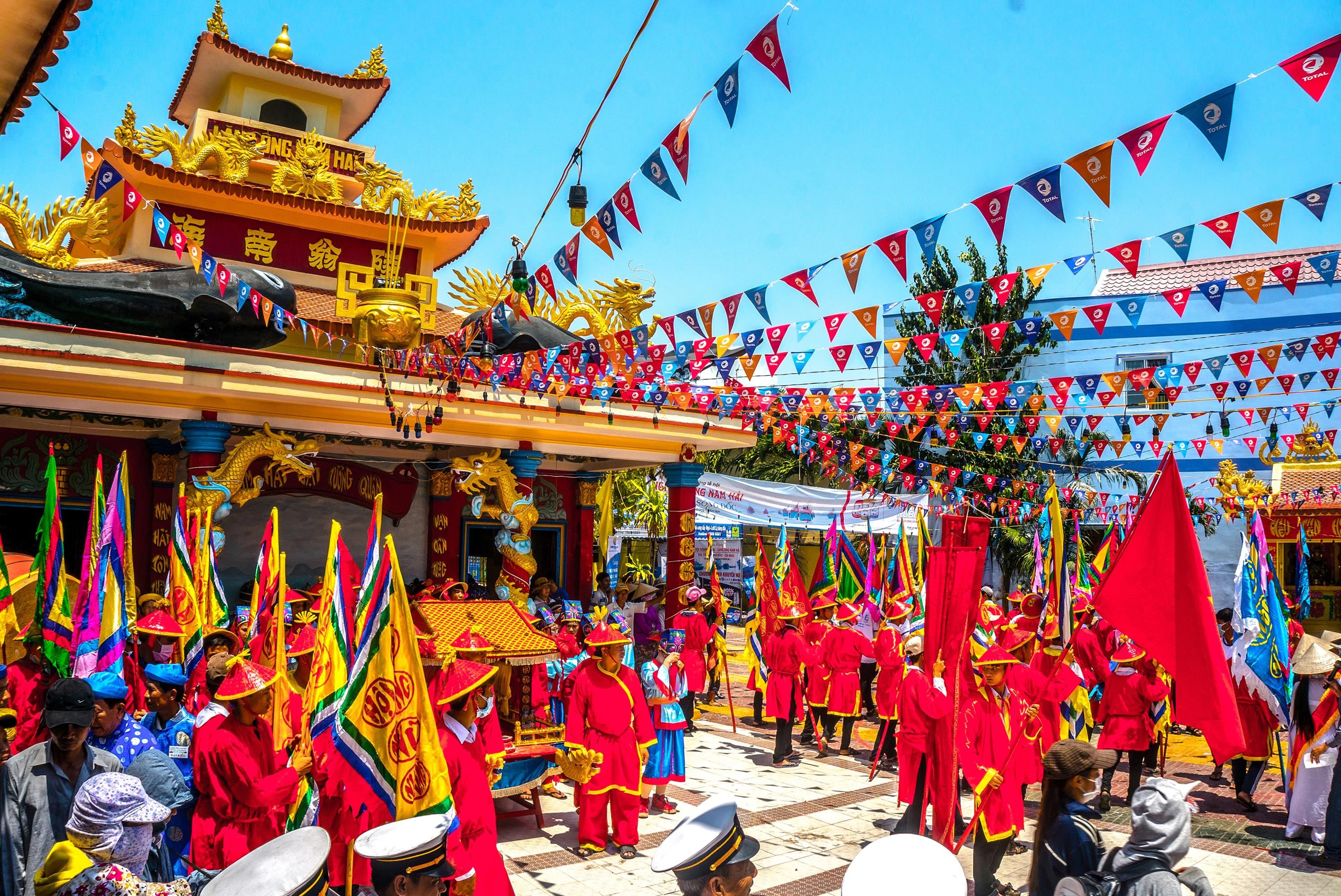 In each place, there will be a different day of the Ong fish festival, depending on the custom or the time when the fish is first seen by the locals. There is normally an altar of Ong Nam Hai at the main hall of each Ong fish temple, while whale bones covered with red cloth are put on the two sides. There are also Right Altar, Left Altar, and temples worshiping Tien Hien, Hau Hien, Ngu Hanh, and Lang Lai General (Otter).

The Nghinh Ong Festival starts early in the morning. The offerings (including chickens, ducks, fruits, cakes, roasted pigs, incense and oil lamps) will be put on the altar in front of Ong temple. At the time of the ceremony, the incense will be burnt and then rites will be performed. Next, the incensory will be carried onto a prepared ship. Taking the lead is the ship of the Organizing Committee, followed by hundreds of fishing boats of all sizes and capacities of fishermen, which are lavishly decorated. When they come to the seaport, many other ships continue to join in, creating a lively and bustling scene of the sea. On the way to the predetermined location, if you see an Ong fish spraying water, the group of ships will immediately return home; otherwise they will have to continue their journey to the destination. At this time, the celebrant will perform rites until late night to pray for a year of fruitful harvest, peace, and good weather.

Many ships of all sizes participate in the ceremony. Photo: zing.vn

- Time: Nghinh Ong Festival is usually held around mid-November of the solar calendar (October 15 and October 16 of the lunar calendar) annually. Therefore, if you plan to travel to Can Tho, you should do so at this time to be able to fully explore the beauty of the festival here. 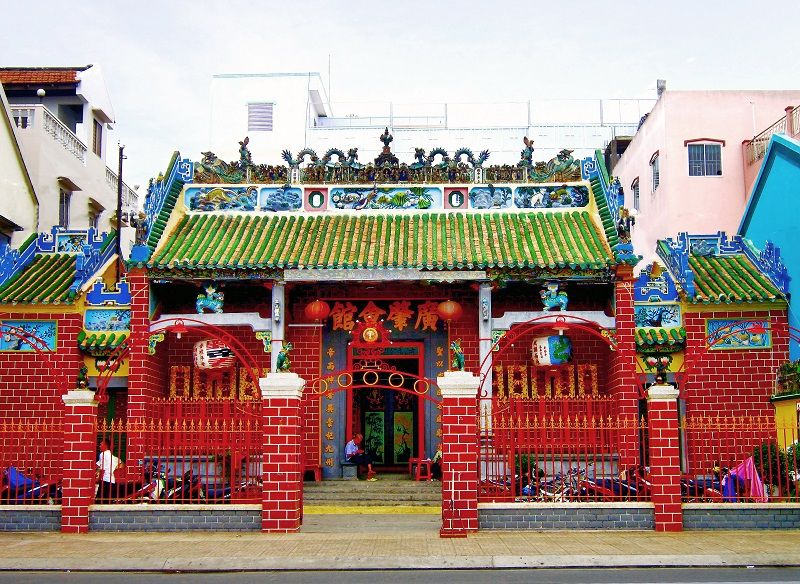 Ong Pagoda is the place where the “Dau Den” festival  takes place in Can Tho. Photo: wiki.youvivu

“Dau Den” means “Lantern Auction” - a unique cultural festival that originated from China and was then introduced to Can Tho. The special thing is that this festival does not have a fixed date of celebration: once every few years, once a year, or even on anniversary days of the country. At Ong Pagoda (Can Tho), the “Lantern Auction” festival is usually held every year on the 15th of January (lunar calendar). This festival is held to promote the festive atmosphere, strengthen solidarity in the community, and also raise money for charitable activities as all the money gained is used for building schools, helping orphans and building cemeteries. 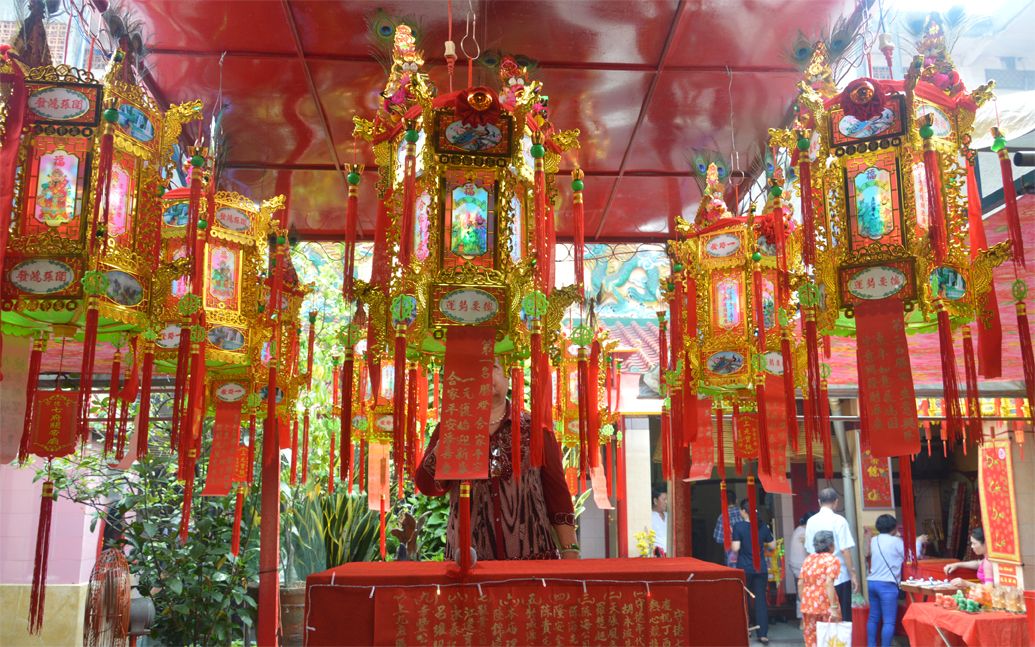 Lanterns are hung up in preparation for the auction. Photo: Bandantoc

The Hoa people can make sophisticated and beautiful lanterns, each of which has its own name such as Quan Thanh De Lantern, Phuoc Duc Chinh Than Lantern and Thien Hau Thanh Mau Lantern. The height of the lantern is about 60cm with a circumference of about 40cm. The cylindrical lamp has 6 sides, each of which is a piece of glass with pictures of landscapes, mountains, rivers, apricot blossoms, birds, bamboo, lotus, etc., which are accompanied by blessings in Chinese characters. The six corners of the lantern have the shape of 6 dragons, hanging pieces of blue jade and red bows. There is a yellow card underneath with the name of each lamp in red. For the Hoa people, getting a lantern in this festival means they can get honor and luck to themselves, their families and the whole village.

During the lantern auction, people gather in groups of large numbers at a hall to observe all the lanterns hanging from the ceiling according to the order of gradually increasing prices. The participants are usually collectives representing a province, commune or ward. Depending on the god of each region, the price of the lantern named after that god will be higher. At the same time, the price is also based on the buyers’ preference. Generally, the lanterns with the name “Quan Thanh De Quan” are more preferred, leading to its highest price. The winner will be invited to come to the stage to get the lantern in a solemn scene with cheers and applause. The ceremony goes on until the last lantern is auctioned off. 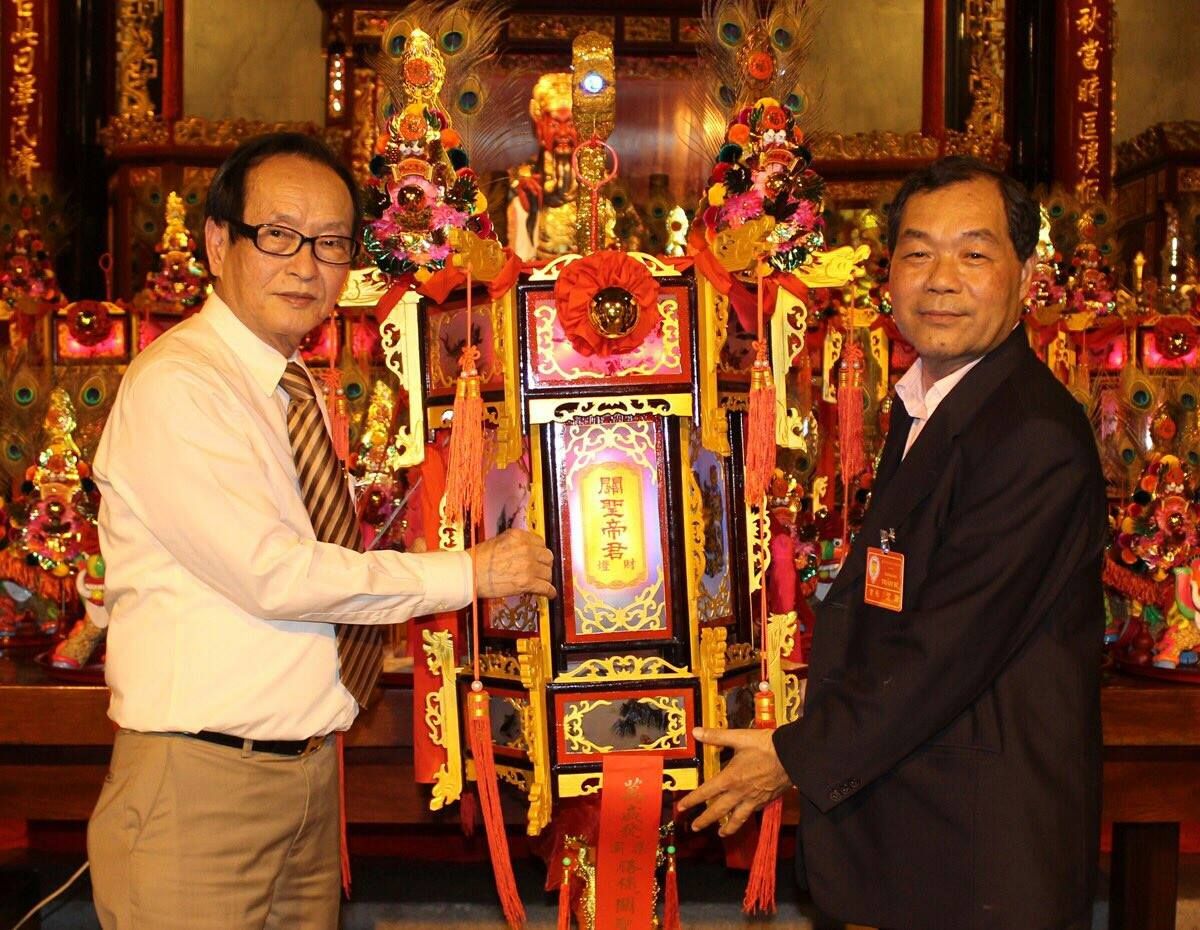 Lanterns are given to the winners. Photo: ndh

- Time: around July of the solar calendar

“Praying for Peace” festival - for a year of favorable things

The “Praying for Peace” festival in Can Tho is an opportunity for people to remember the merits of Lady Thien Hau - the god who governs rivers. That is why people hold this festival to pray for her to help them do business and eliminate dangers, so that they can have a prosperous and peaceful year.

A fairly large raft made of banana trees and decorated with confetti is placed right in front of the main door of Ba Temple. Photo: place.vn

The “Praying for Peace” festival can be held in many different places, but shrines are the most popular venue. During the festival, in front of each house, an altar is prepared to perform the custom of “taking the unlucky ship into the big river”. The offerings include charcoal, firewood, salt, cast iron pots with fruits, cakes and fresh flowers. People will burn incense and pray to send evil spirits away and remove bad luck for their family. 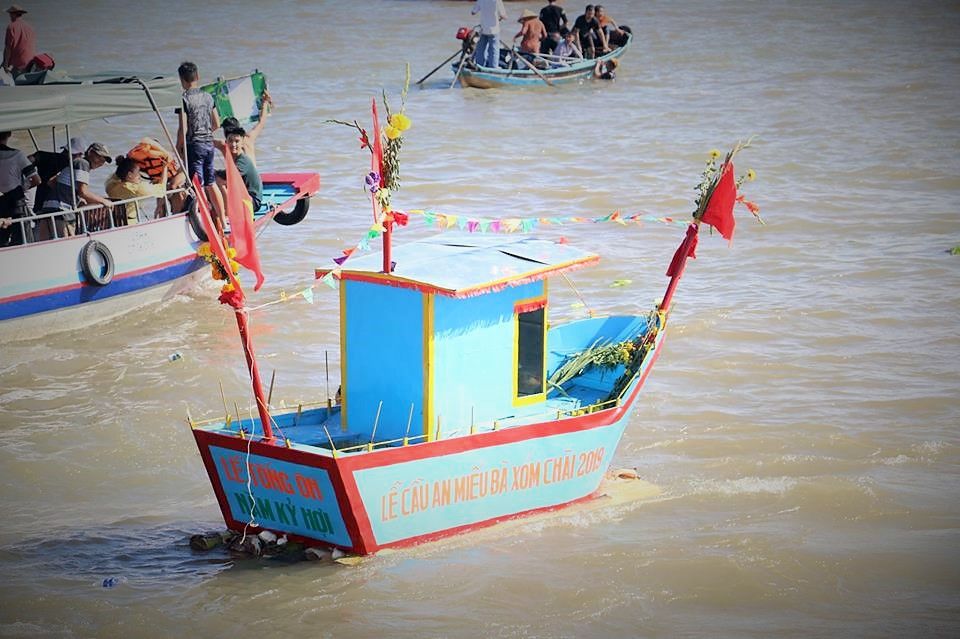 Rafts are on the river. Photo: baocantho

At the main worshiping area, there are also many special activities such as lion dance, classical drama and Southern amateur music to send bad luck out of the family.

- Time: around February of the solar calendar (from January 12 to 14 of the lunar calendar)

- Location: Can Tho City

Coming to Can Tho without going to the Ok om bok festival is a pity as you will not be able to fully experience the beauty of traditional culture here. As one of the biggest and most jubilant festivals of the year of the Khmer ethnic group, Ok om bok is also known as the Moon Worshiping Ceremony and is compared to the “Lunar New Year” because of its grandeur. At the end of the harvest, people hold this festival in the presence of the elders and the moon god to wish for a fruitful harvest and good things. 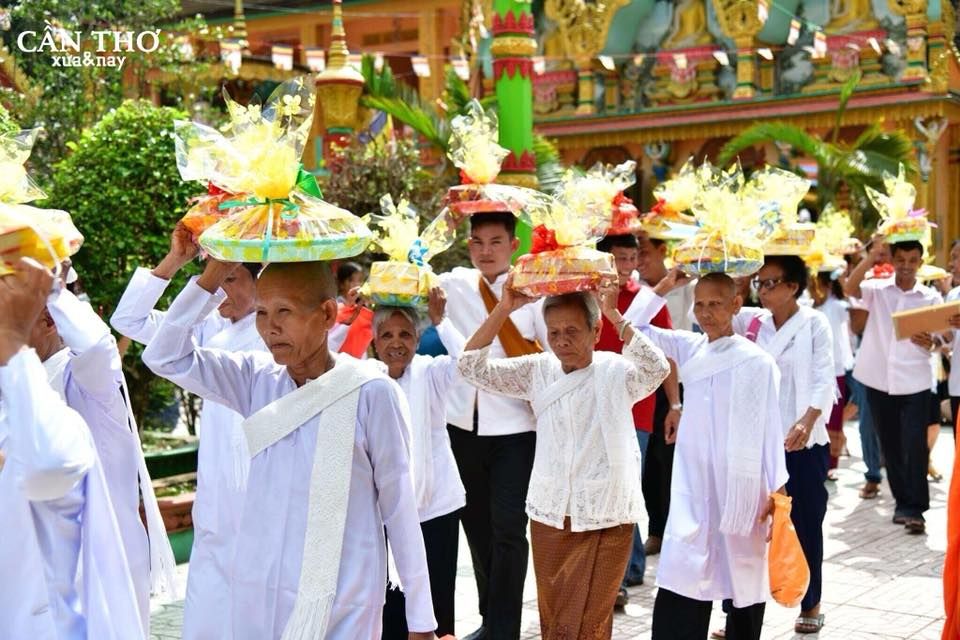 People bring offerings to worship at the Ok om bok festival at the temple. Photo: Canthoxuavanay

The Ceremonial tray used to worship the moon has agricultural products including: Chek (banana), dam-loon (potato), don (coconut), ta-rau (taro), among which “green rice” are displayed in the middle of this tray. There are also boat races in the festival, and the atmosphere of traditional folk singing and dancing is very bustling. Coming here, visitors can enjoy delicious traditional cakes and learn about costumes, daily life items, and cultural values of Khmer people.

- Location: Can Tho town, Can Tho province

Coming to Can Tho, not only can visitors admire the nature of this land, but they can also learn about the rich cultural life of the indigenous people with long-standing unique festivals.