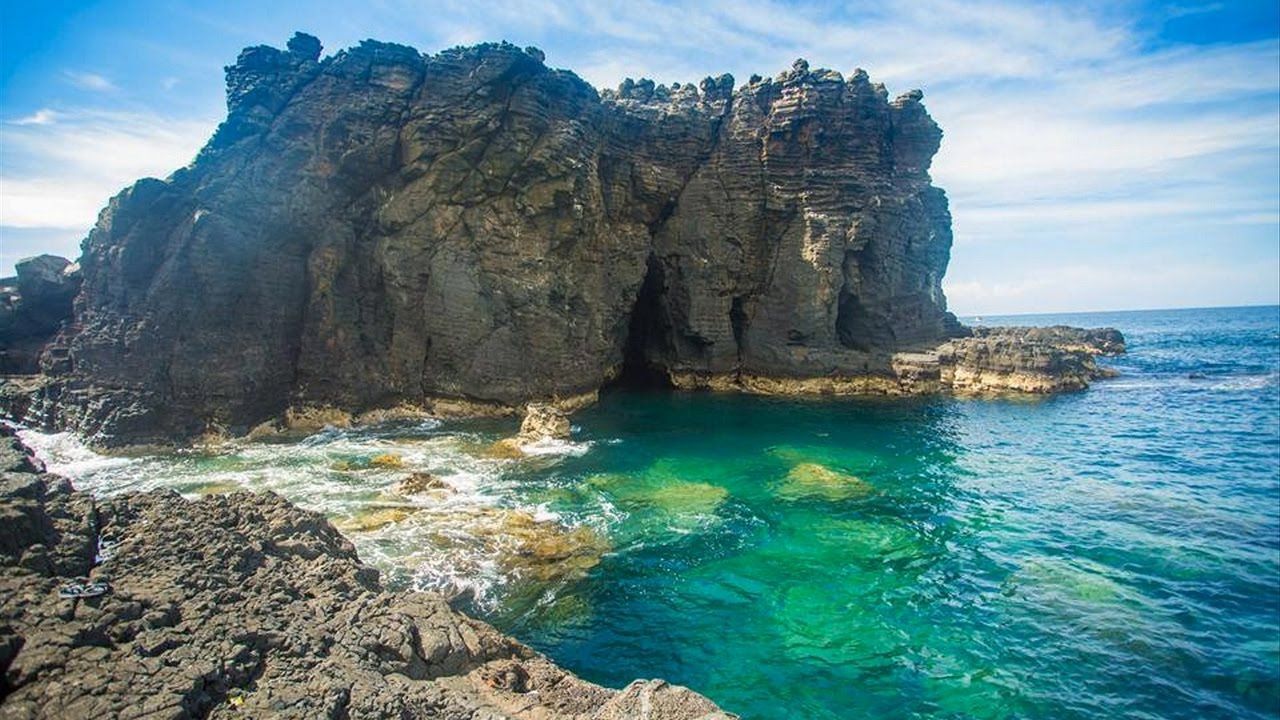 Together with Vu Thi Dong Ha travel to the peaceful, beautiful and dreamy Phu Quy island with low cost in 2 days and 1 night.

Vu Thi Dong Ha (23 years old, Vinh Phuc) is a travel addict. Despite her busy schedule, she tries to arrange time to fulfil her passion for discovering and conquering new lands. Among her past destinations, Dong Ha was extremely impressed with the trip to Phu Quy island, which is a small island district in Binh Thuan province, about 120km from Phan Thiet city with an area of only 16km square. The island also has a number of other names, such as Co Long, Thuan Tinh, Cu Lao Khoai Xu, Cu Lao Thu and so on. 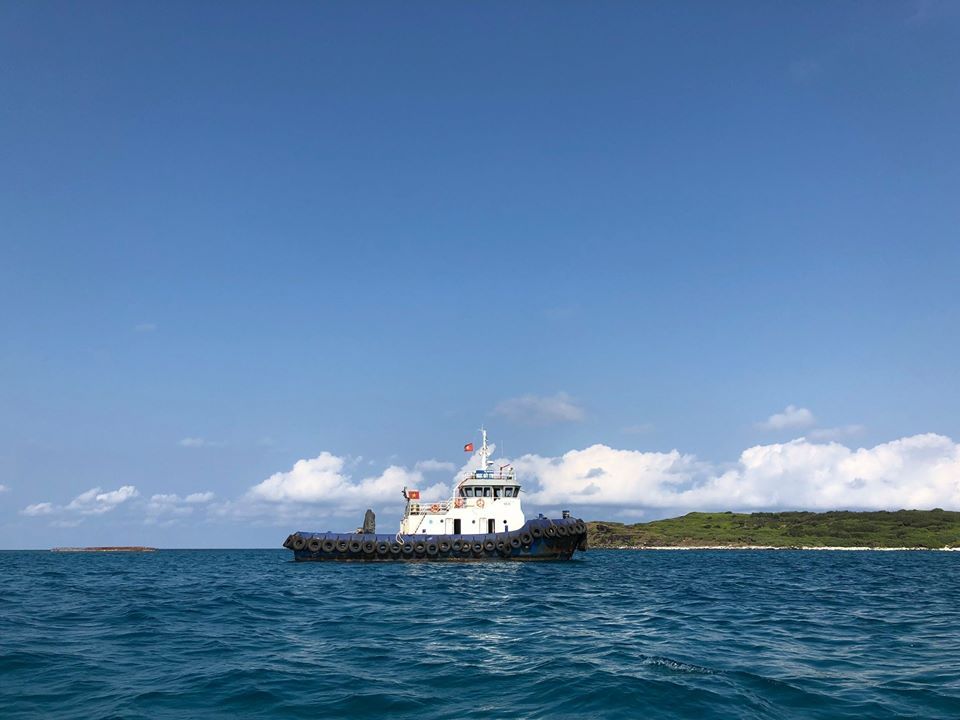 Sharing with Nem-vn.net, she said: “Phu Quy is a very ‘wild’ island. There is no tourism service, and the people on the island are very hospitable, so I strongly recommend those who love nature and the wild sea that hasn't been affected by tourists should travel to this place”.

Dong Ha was impressed with both the island’s abundant natural resources and scenic spots, especially the wild scenery without the influences of professional tourism services on Phu Quy island.

The best time to go to Phu Quy island 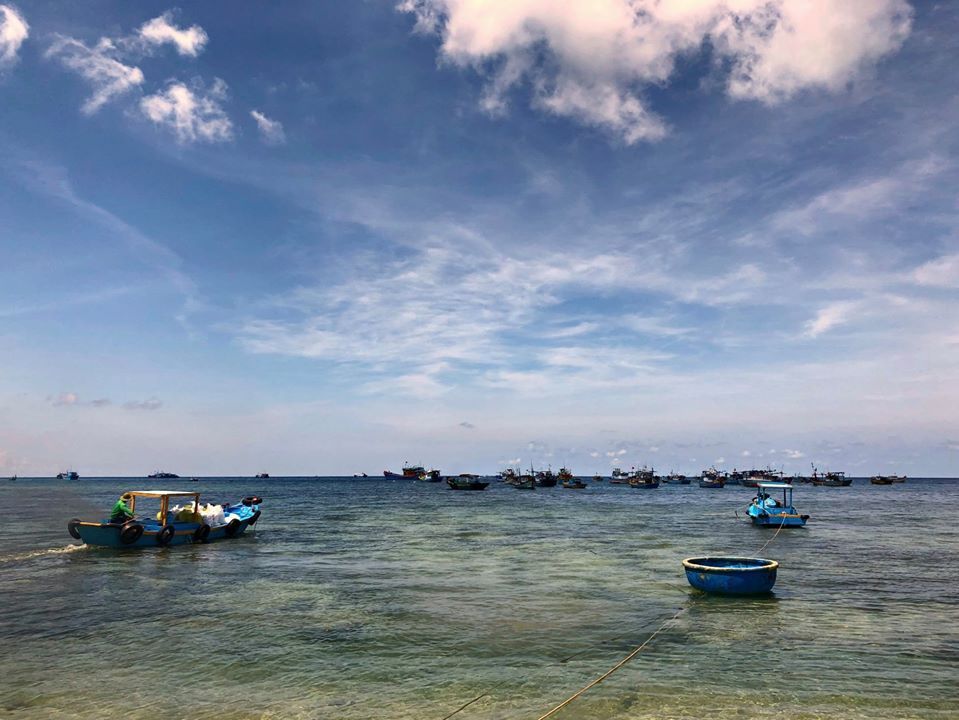 According to Dong Ha's findings, the best time to come to Phu Quy island is from December to June, when the sea is quite calm and clear, suitable for travelling on boat and sightseeing.

How to travel to Phu Quy island 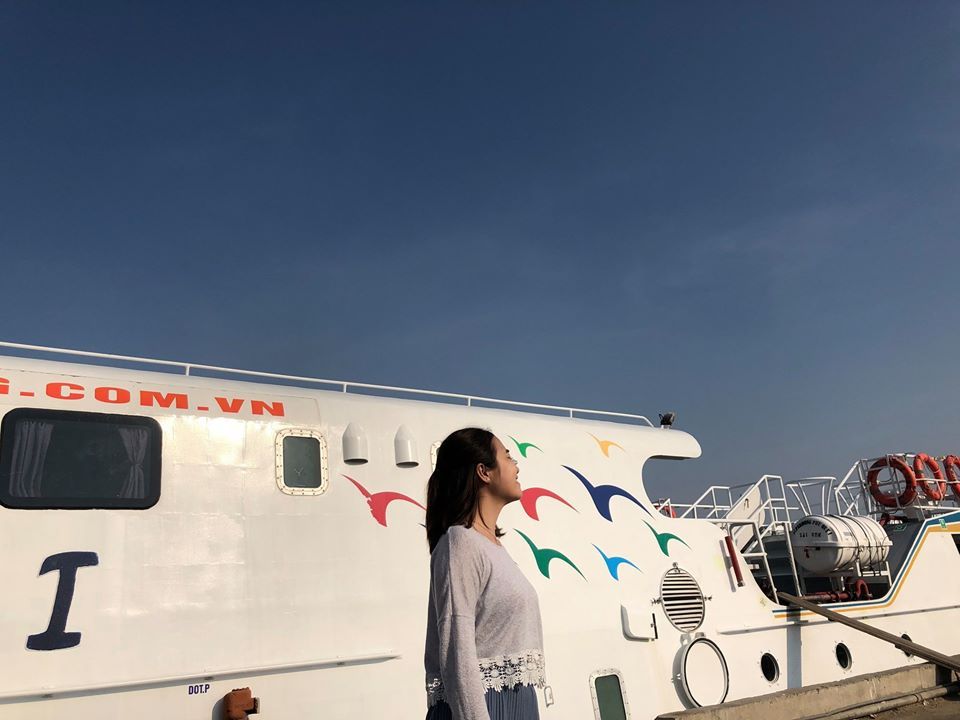 To travel to Phu Quy island, you must go to Phan Thiet city first, then take the Superdong ship to the island. Dong Ha shared that the schedule would be updated on the website of Binh Thuan Department of Transportation. Any changes would be made based on the weather condition; the price ticket for high-speed ship would be VND 350,000/person/turn in around 2-2.5 hours. There are only two trips in a day, so you must be on time. 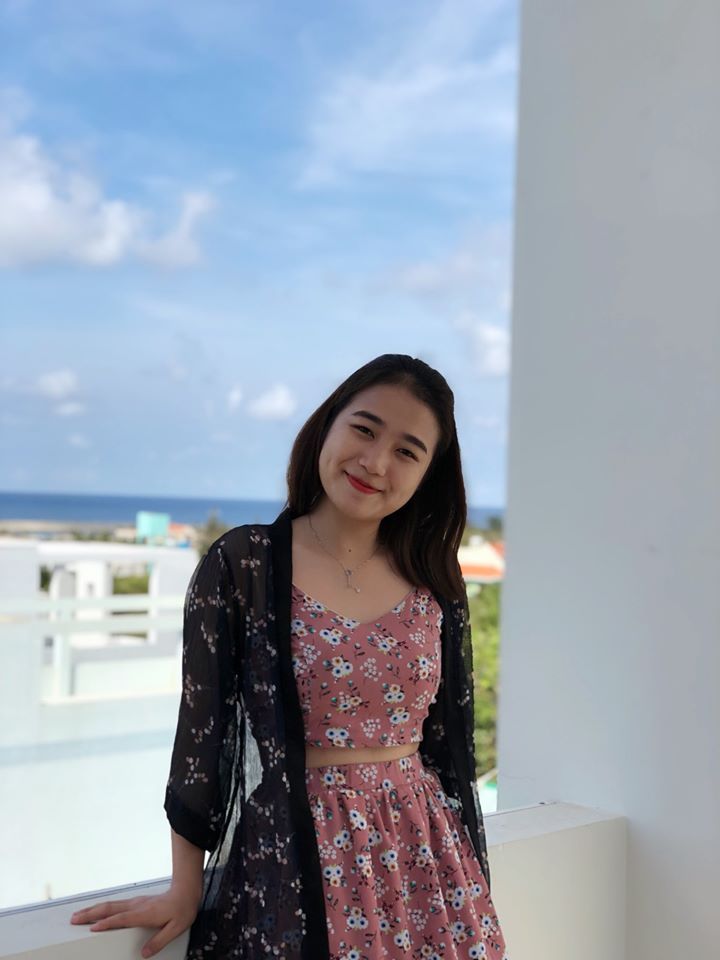 Despite being a small island, Phu Quy basically has accommodation services for visitors from motels, inns to homestays. Depending on your needs and budget, you can choose the suitable type of accommodation. Dong Ha chose to stay in a large motel on the island with a beautiful view overlooking the sea. If you travel in the peak season, you should book a room in advance to avoid the situation of running out of room or rooms with high rates.

Phu Quy is quite small, so Dong Ha chose to rent a motorbike to explore the whole island  with the rental ranging from VND 100,000 to 120,000 per day. On the island, there are many interesting destinations that you can stop by. 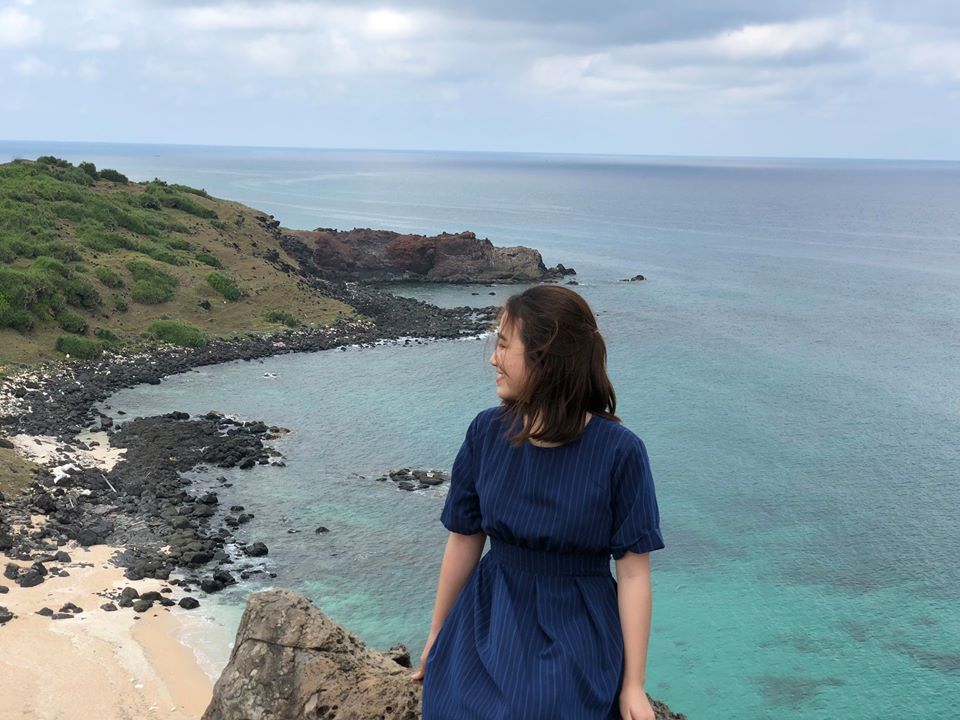 She said the site was located on the foot of a hill about 10 minutes away by motorbike from the center of the district. Bai Nho - Ganh Hang is an interesting attraction with crescent-shaped sand stretch surrounded by black rocks. The sand beach is small but very airy and quiet. The sea water here is clear with fresh air; there are few boats anchoring in this area.

Ganh Hang is a large cliff next to the sea. Everyday, the waves crash strongly against the big rocks, creating a very majestic sight. This place is very suitable to see the vast sea with the vibrancy of the waves offshore. Watching the sunrise or sunset right here is also a great choice to enjoy the romantic beauty of Ganh Hang. 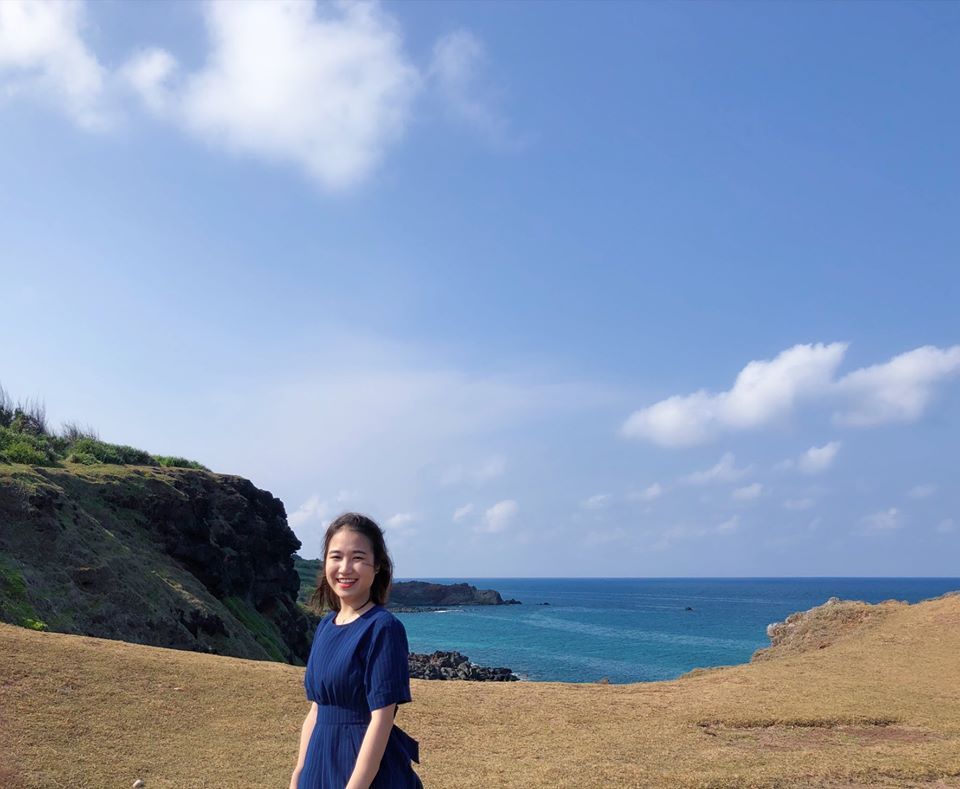 It is said that couples would come here to express their love before going fishing on the sea before the Full Moon day of each month. The place is also wild and windy, which is very suitable for you to admire the sea scene and inhale the fresh air with a typical “salty taste”. 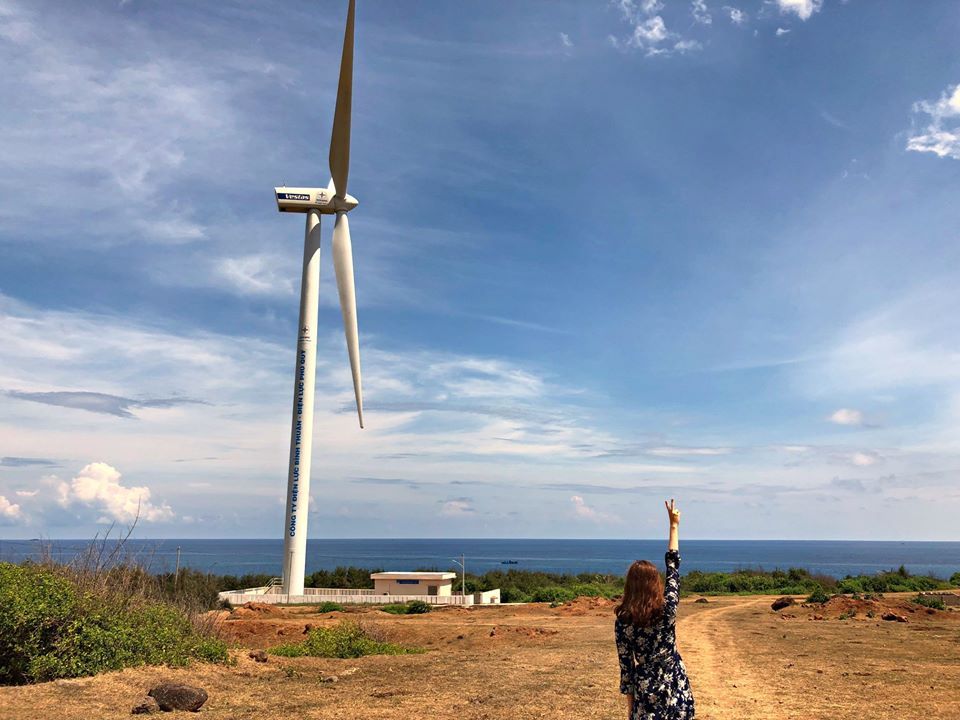 The wind turbine is a “fan” built to create electricity for the people on the island. Phu Quy island currently has 3 wind turbines with a height of 60m and the length of the propeller of 37m, which can be seen from a distance. The way leading to the wind turbines is also very beautiful: one side is the sea while the other is lines of poplar trees, creating a very romantic natural scenery. 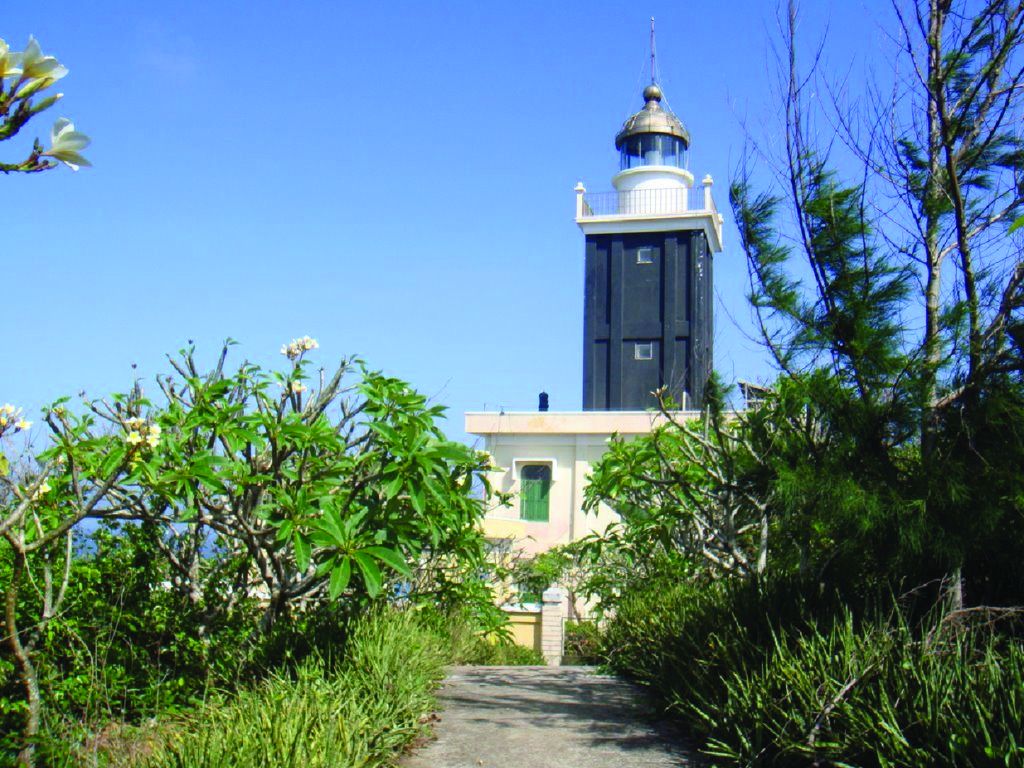 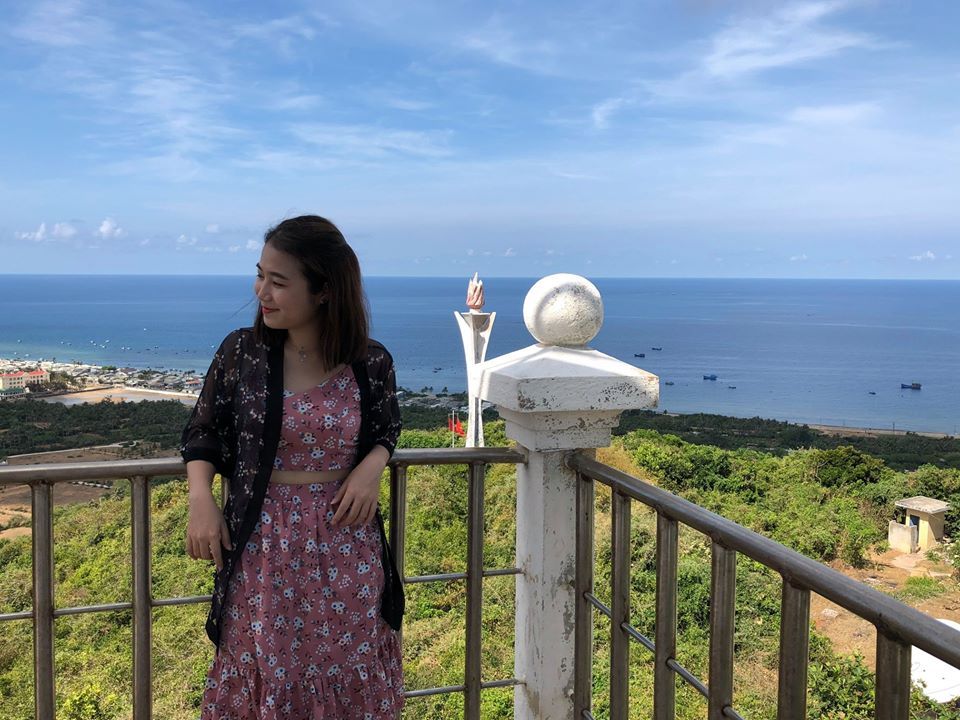 The lighthouse on Phu Quy island is located 3km west of the port in Ngu Phung commune with a height of 126m and an average width of 4m. The lighthouse is designed in a box shape, and on the foot is a yellow-painted two-story building. It is noted that this is considered the largest lighthouse in Vietnam. Phu Quy lighthouse is known as the "international eye of the sea". Although the lighthouse has been in operation for about 25 years, it still plays an important role in navigating ships and asserting Vietnam's sovereignty over the sea and islands. 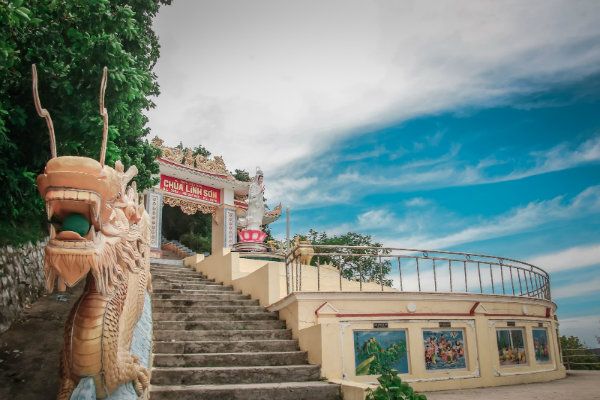 Linh Son Pagoda is located in Ngu Phung commune, Phu Quy district, Binh Thuan province - on Cao Cat mountain with a height of more than 80m above sea level. It is said that this pagoda was constructed more than 100 years ago, which is a unique architectural work of natural and man-made features.

Visiting Linh Son Pagoda, visitors will be impressed with the vast forests surrounding the spacious architectures. The highlight of the pagoda is the statue of Quan The Am, which is solemnly placed on top of Cao Cat mountain, giving a sense of holiness. Coming to this place, you can also admire the whole scenery of the sea and island. From Cao Cat mountain, the entire Phu Quy island will appear in front of your eyes. 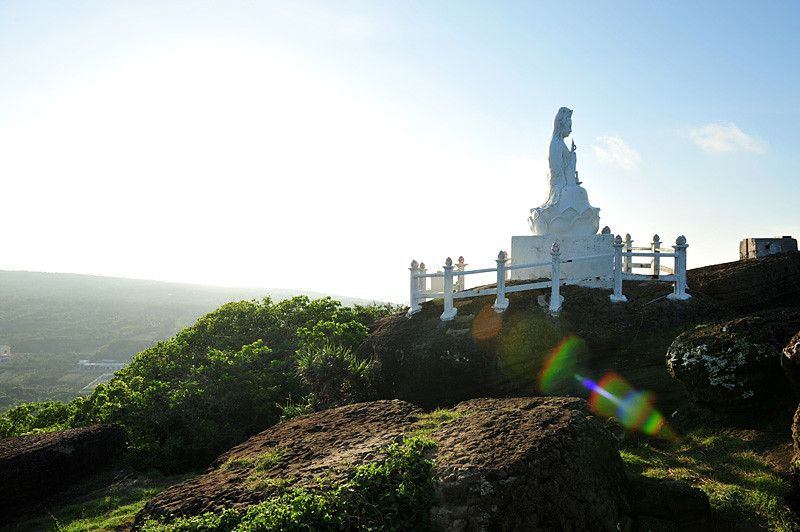 The highlight of the pagoda is the statue of Quan The Am, which is solemnly placed on top of Cao Cat mountain. Photo: vietnamarchitecture-nguyentienquang

Another special feature of Linh Son Pagoda is that this place does not have any monk, so Buddhists on the island take turns performing rituals and welcoming visitors with their sincerity and hospitality. 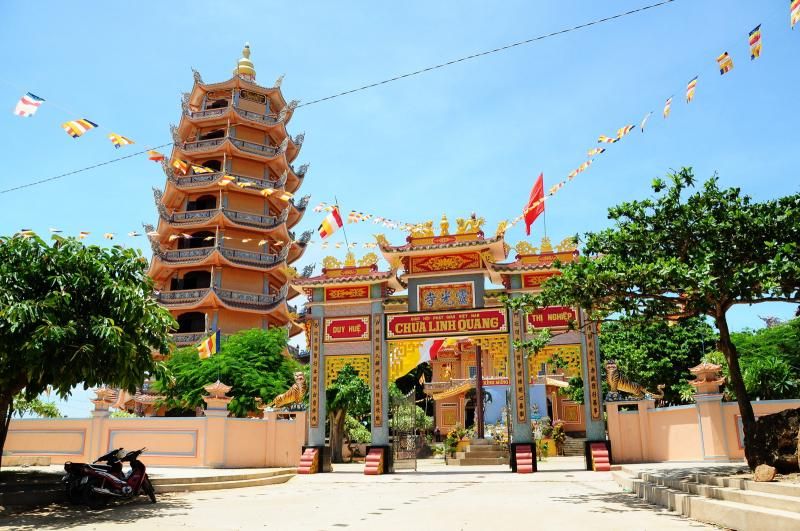 Linh Son Pagoda is located on the sacred Cao Cat mountain, from which you can see the whole island. The pagoda is famous for its sacredness with a majestic statue of the Buddha, where people often come to send their beliefs and wishes in life.

Temple of the Princess Ban Tranh or Ba Chua Xu temple is located in Long Hai commune, about 3km from the People's Committee of Phu Quy district to the northwest. The temple was named after the princess of the kingdom of Champa - Ban Tranh. After her death, people on the island built this temple to worship her. She is credited with bringing seeds and food to the island to reclaim land, garden and build villages. It is said that Princess Ban Tranh did not obey the king's orders, so she was exiled to the island with a maid. Since then, she began to cultivate and stabilize here.

The Festival of Princess Ban Tranh Temple takes place on the third day of the first lunar month (around February of solar calendar), and almost everyone on the island will participate. According to the custom, the ordination, watchfulness and worship of Princess Ban Tranh are rotated through each village annually and usually takes place on the 4th day of the 4th lunar month (around May of solar calendar). At this point, visitors can understand more about the cross cultural features of Vietnamese and Cham people in a remote island. 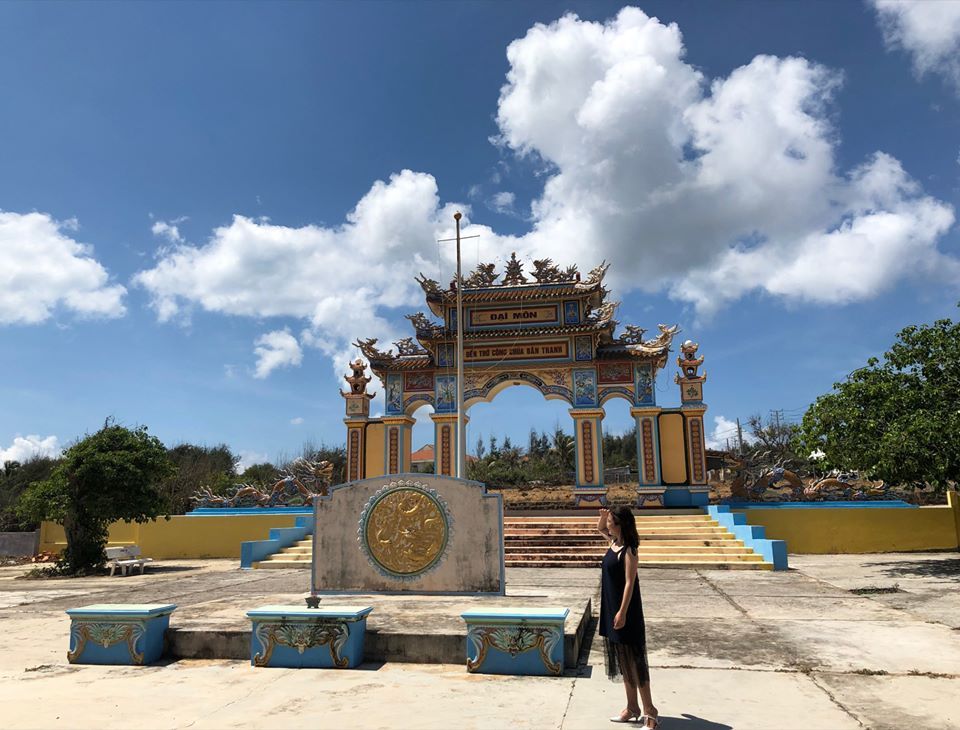 Temple of the Princess Ban Tranh on Phu Quy island.

Hon Tranh is also a place recommended by Dong Ha if you come to Phu Quy island. The place was named after a kind of grass (called Tranh) local people often used to make roofs. Hon Tranh has an area of 2.7 km2 and was once chosen by King Gia Long as a refuge when pursued by Tay Son troops.

Hon Tranh is surrounded by high mountains, so the coast is very quiet and clear all year round. Just immerse yourself in the cool water of the sea, breathe the fresh air, enjoy the peaceful space and you will feel extremely relaxed. With the clear sea water, this place is very suitable for diving to explore the diverse ocean world. Hon Tranh has brilliant coral reefs that leave anyone surprised. 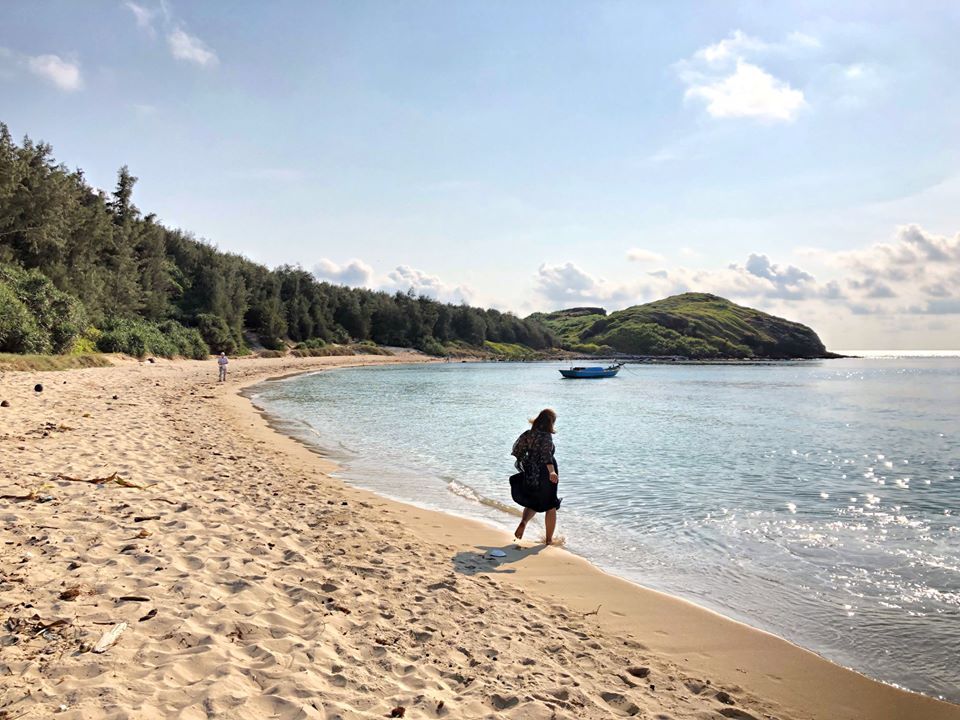 The special thing is that Hon Tranh used to have 77 Ca Ong (a fisherman's respectful name for whales) coming here, so there is a temple to worship Nam Hai (another name for Ca Ong). This place is very sacred, showing a part of the fishermen's beliefs.

Besides the above attractions, Dong Ha was also extremely excited to watch the sunrise and sunset on this beautiful island. She said that she could walk to the beach, go camping or sing with friends at night. 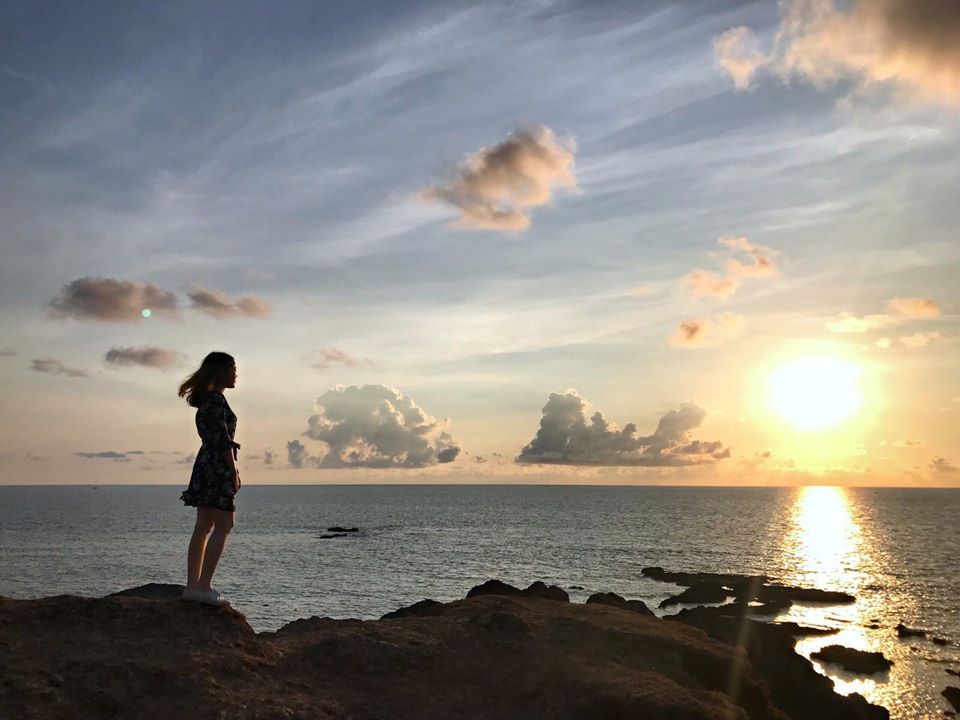 Watching sunset and sunrise is a must when coming here. 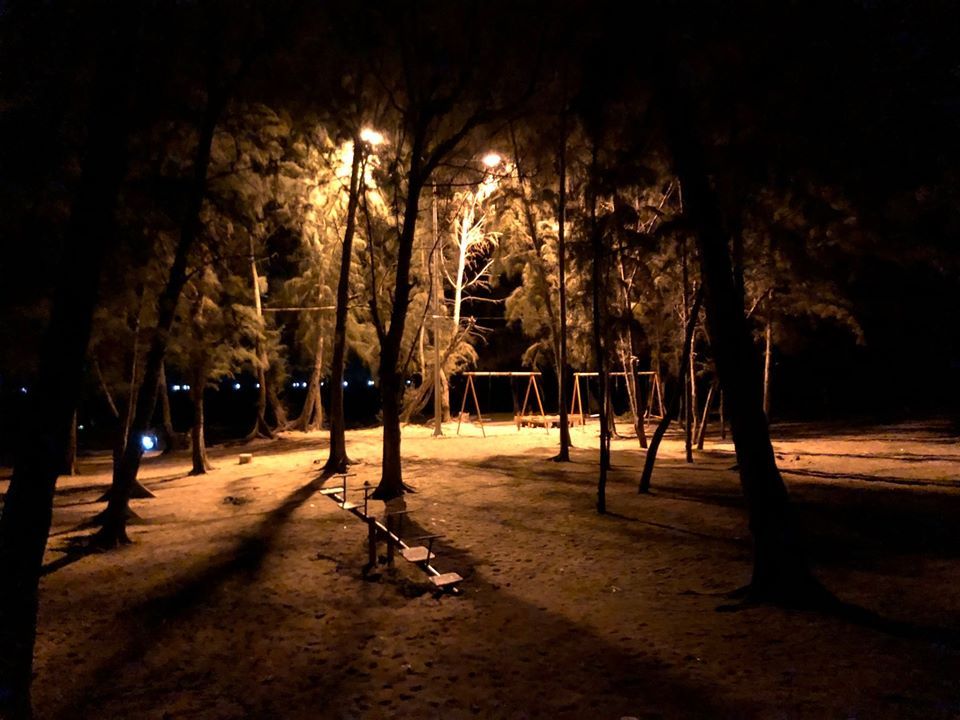 The quiet and wild Phu Quy Island at night.

What to eat when coming to Phu Quy island?

Based on Dong Ha’s experience, Phu Quy island has a variety of fresh and delicious seafood that you must try, especially the famous moon crab. This type of crab has very fragrant meat, especially at the moonrise period. Crabs can be steamed, grilled and dipped with lime pepper salt, so you can enjoy the freshness.

Besides, you can eat some other seafood such as king crab, grouper and snail salad. 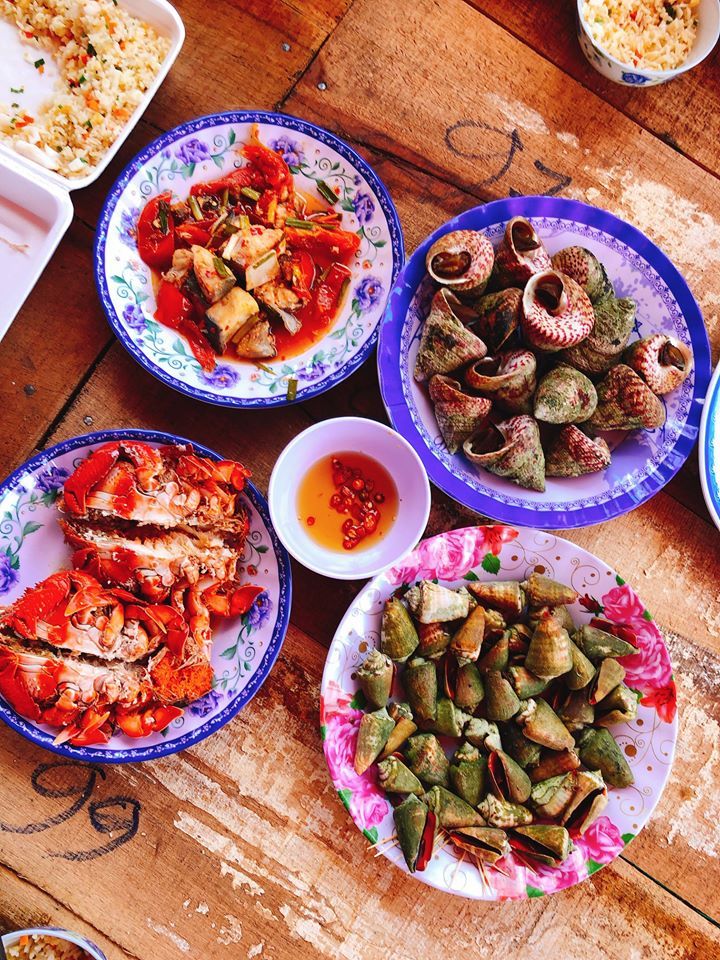 The cost for Dong Ha's trip is about VND 2.5 million/person. She confided to Nem-vn.net that the journey to Phu Quy island was very suitable for weekends to "breathe new life", helping you temporarily escape from the noise and bustle of the city. Especially for those who love nature and want to immerse themselves in the wild scenery, Phu Quy Island is a must-go place in their life.