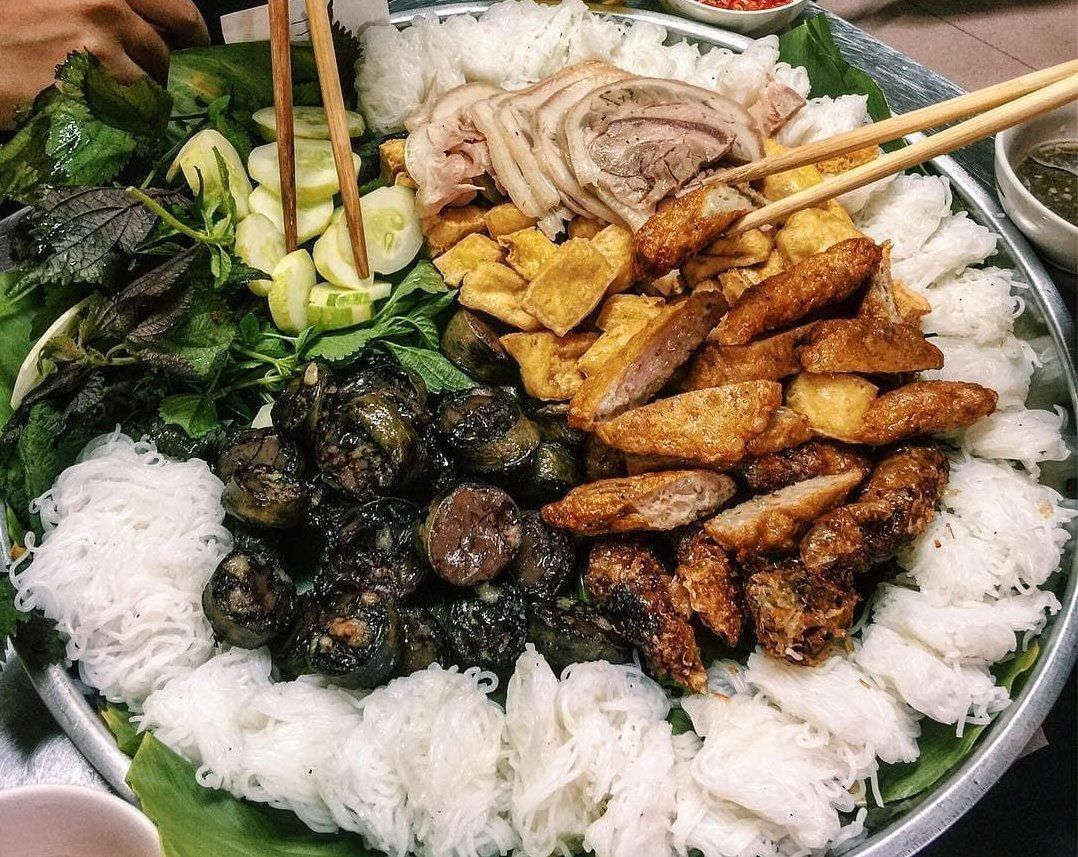 Five tasty noodle dishes of Hanoi that can easily “captivate” you

In addition to Pho, noodles are a typical feature of Hanoi, and here are five tasty noodle dishes of the capital that you should try once.

Bun Cha is one of the typical noodle dishes of Hanoi, so it is not difficult to find a Bun Cha restaurant on any street in this capital of Vietnam. Although this dish is very popular in this country, perhaps only in Hanoi can you enjoy the “authentic” Bun Cha. 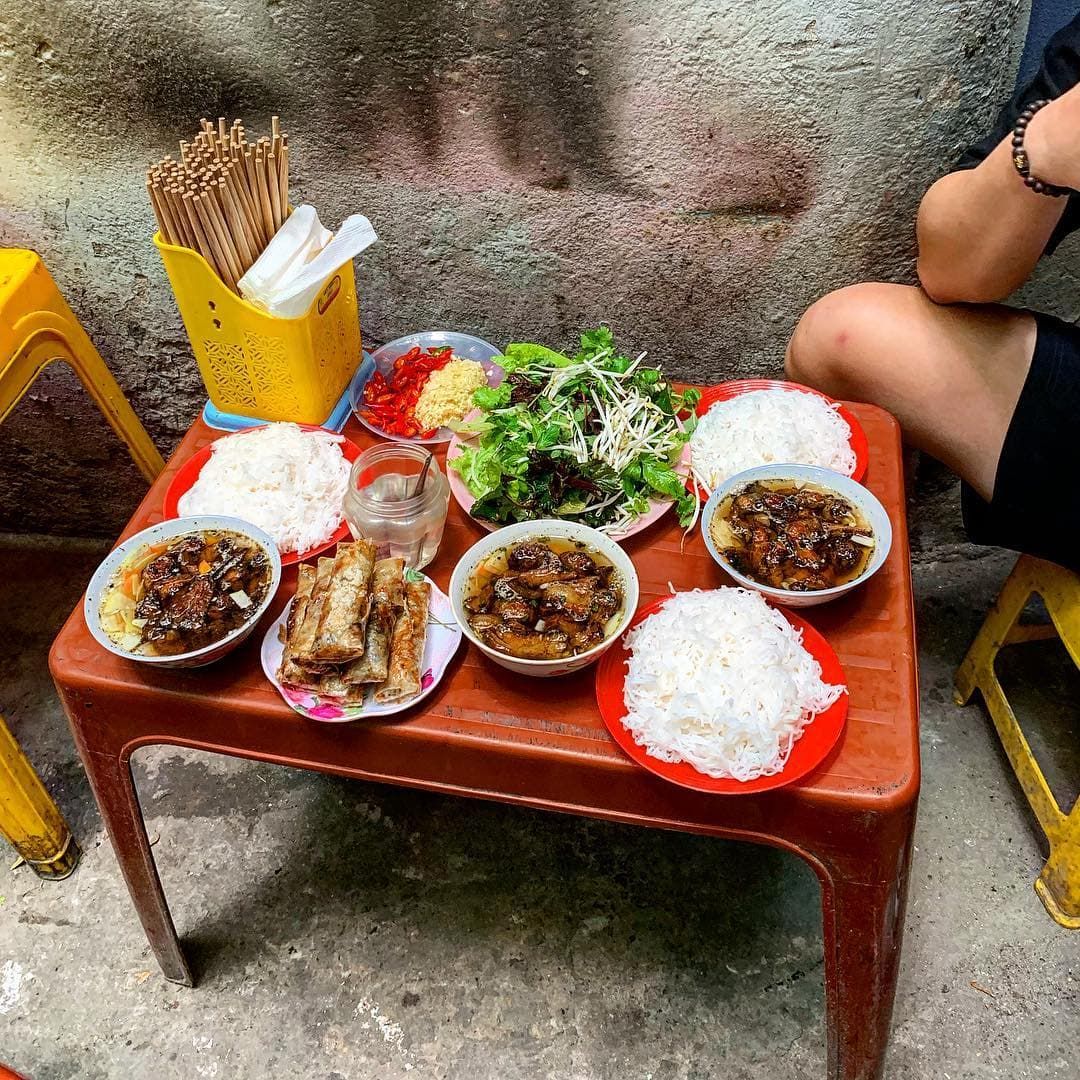 Bun Cha - a typical Hanoi noodle dish that you must try. Photo: Hanoipho.vn

In terms of appearance, Hanoi Bun Cha is quite similar to “vermicelli noodles with grilled pork” in Central and Southern Vietnam, however, the feature that makes “Hanoi's brand” lies in the dipping sauce which is less sweet and has a mild taste. In a serving of Bun Cha, there are usually two types of grilled meat, namely the pork patties and pork pieces. Depending on your preferences, you can choose either or both of them to enjoy.

The patties are usually made from lean pork shoulder. After being minced, it is marinated with spices such as pepper, shallot, garlic, sugar and some cooking oil to soften the meat. After that, small meatballs are made and flattened into bite-sized patties. The grilled pork pieces are made from bacon, which are marinated as with patties, and then are put on the grill. Both types are grilled on charcoal, this is the feature that creates the taste for the dish. The meat will be grilled until it has a golden brown colour and an attractive aroma, it is normal for the meat to be somewhat burnt. 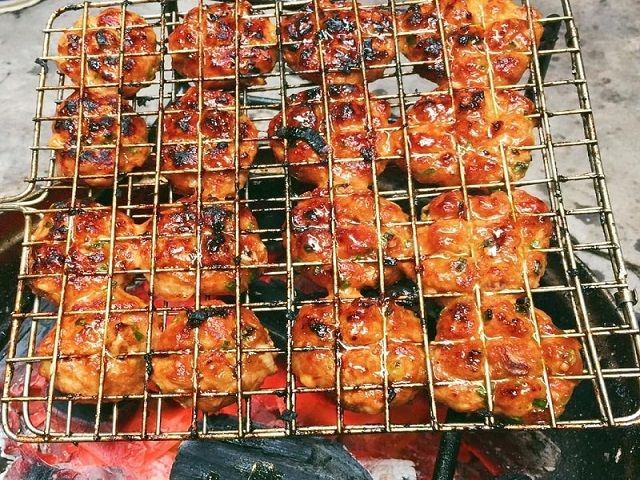 Grill the meat on a charcoal stove. Photo: vietreview

The dipping sauce of this Hanoi noodle dish consists of fish sauce, garlic, chili, lemon, and sugar with an appropriate ratio to create a pleasant sour, salty and sweet taste. You should enjoy Bun Cha with some salad made from cucumbers, papaya, carrots and some raw vegetables. Notably, the dish will taste better when the meat has just been grilled and the dipping sauce is still warm. Just pick up some noodles, dip it into a bowl of fish sauce and enjoy - you will feel the rich taste right at the tip of your tongue thanks to the combination of flavours from the dipping sauce, grilled meat and noodles. The dish is served with herbs, raw vegetables and salad to balance its greasy taste. 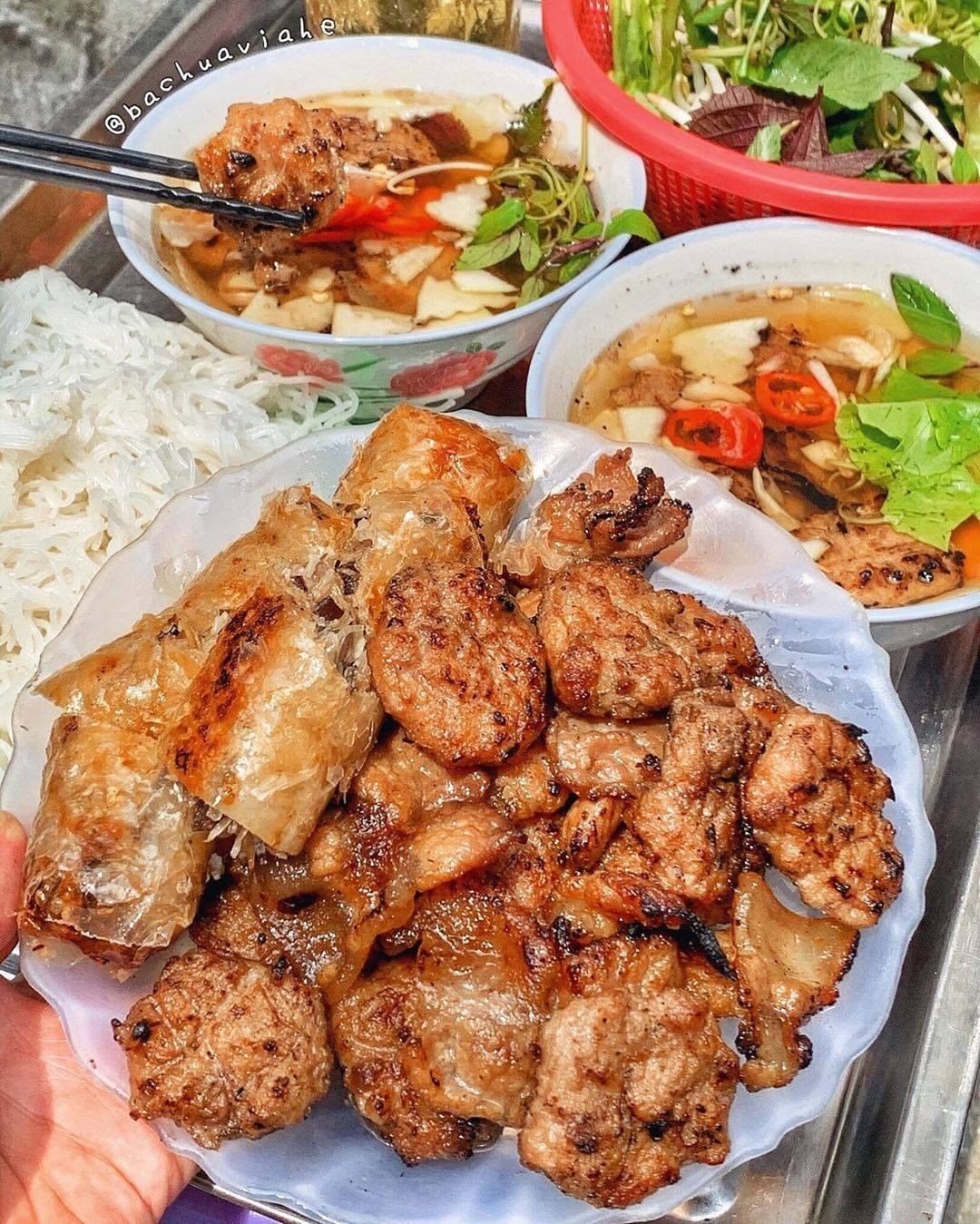 One of the must-try dishes when you come to Hanoi is Bun Thang. For the strange name of the dish, it is explained that the word "thang" refers to “many ingredients combined in the dish” like a combo of traditional oriental medicine, while others indicate that the word "thang"  means "soup" in Chinese and “Bun Thang” means “noodle soup”.

This dish used to be cooked by Hanoians during the Lunar New Year holiday, when there were a lot of leftovers after parties, especially chicken and lean pork paste. Meaning, they would just need to add some other ingredients and a tasty bowl of Bun Thang would be ready. Over time, this Hanoi noodle dish has become not only a popular dish after Tet, but also a specialty of the capital itself - a dish everyone wants to try when coming here. 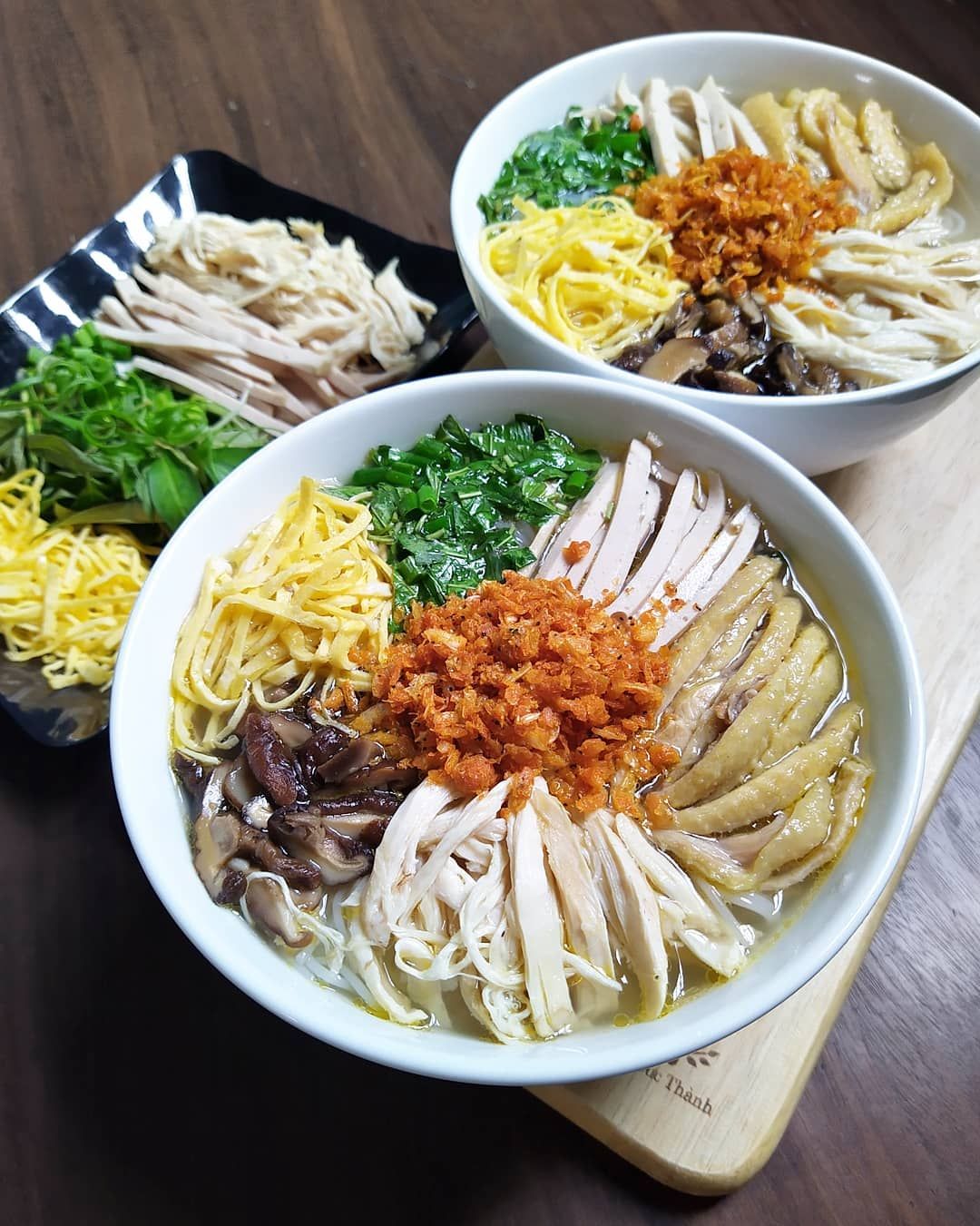 This noodle dish seems to be simple, but it actually requires a lot of meticulousness by the cook due to the composition of a variety of ingredients, such as shredded fried eggs, lean pork paste, chicken and shrimp. It is noted that, depending on the restaurant, the cook will change the ingredients in the dish to make it more diverse. The broth is stewed from chicken bones and shrimp, and when enjoying the dish, you can add spring onions, shiitake mushrooms and the indispensable herb - Vietnamese coriander. You will be able to feel the perfect blend of flavours from the light sweet broth, chicken, eggs, crispy lean pork paste, as well as the freshness from mushrooms and spring onion. Meanwhile, Vietnamese coriander creates a unique aroma for the dish that can leave you with a strong impression right from the first taste. 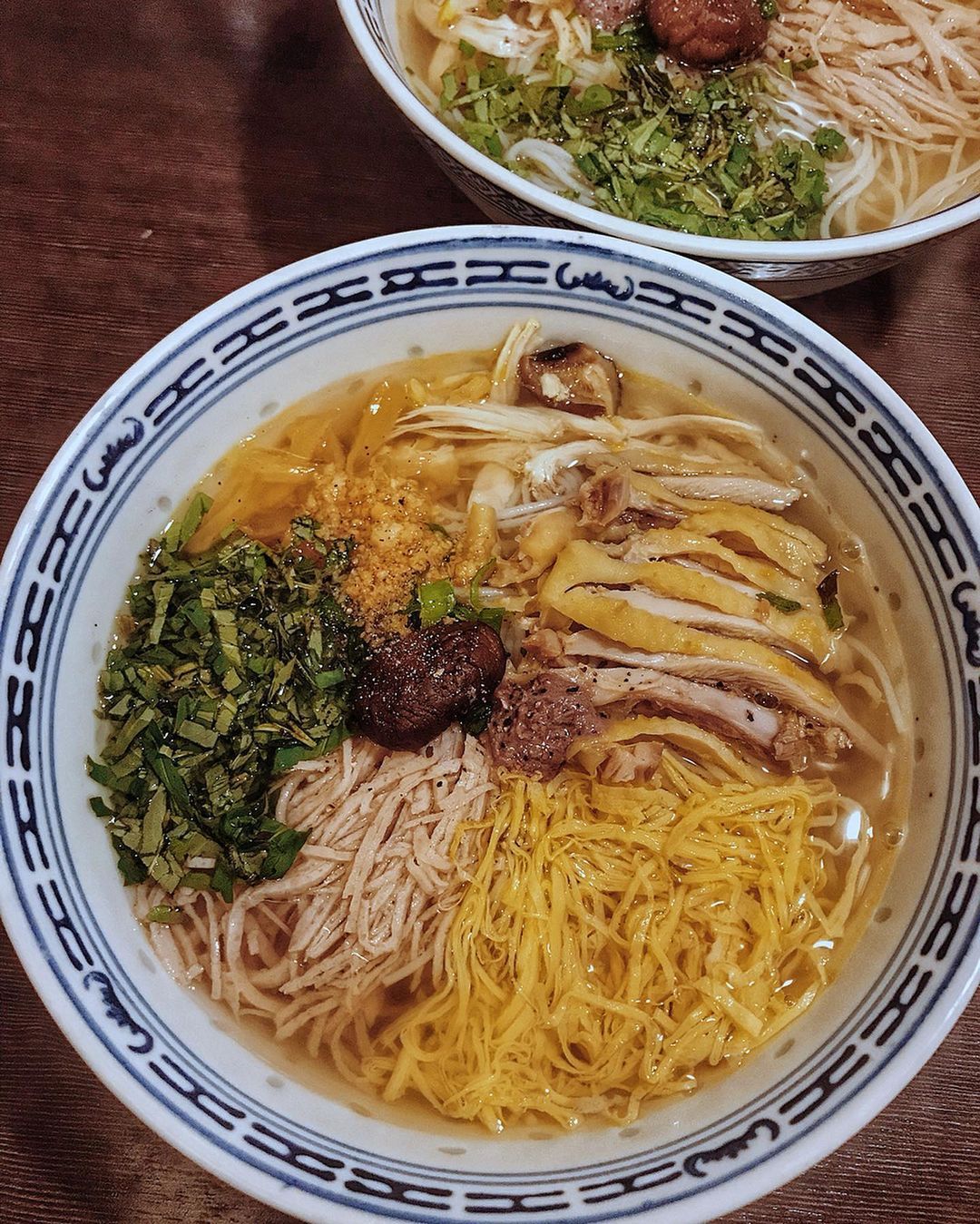 The ingredients for Bun Thang can be changed depending on your preferences. Photo: @cooked_by_chi

Bun Dau is a rustic noodle dish, often served as a snack for the Hanoian, and it has also gradually become a typical feature of Hanoi cuisine. It is said that only in Hanoi can you taste the authentic flavour of Bun Dau. 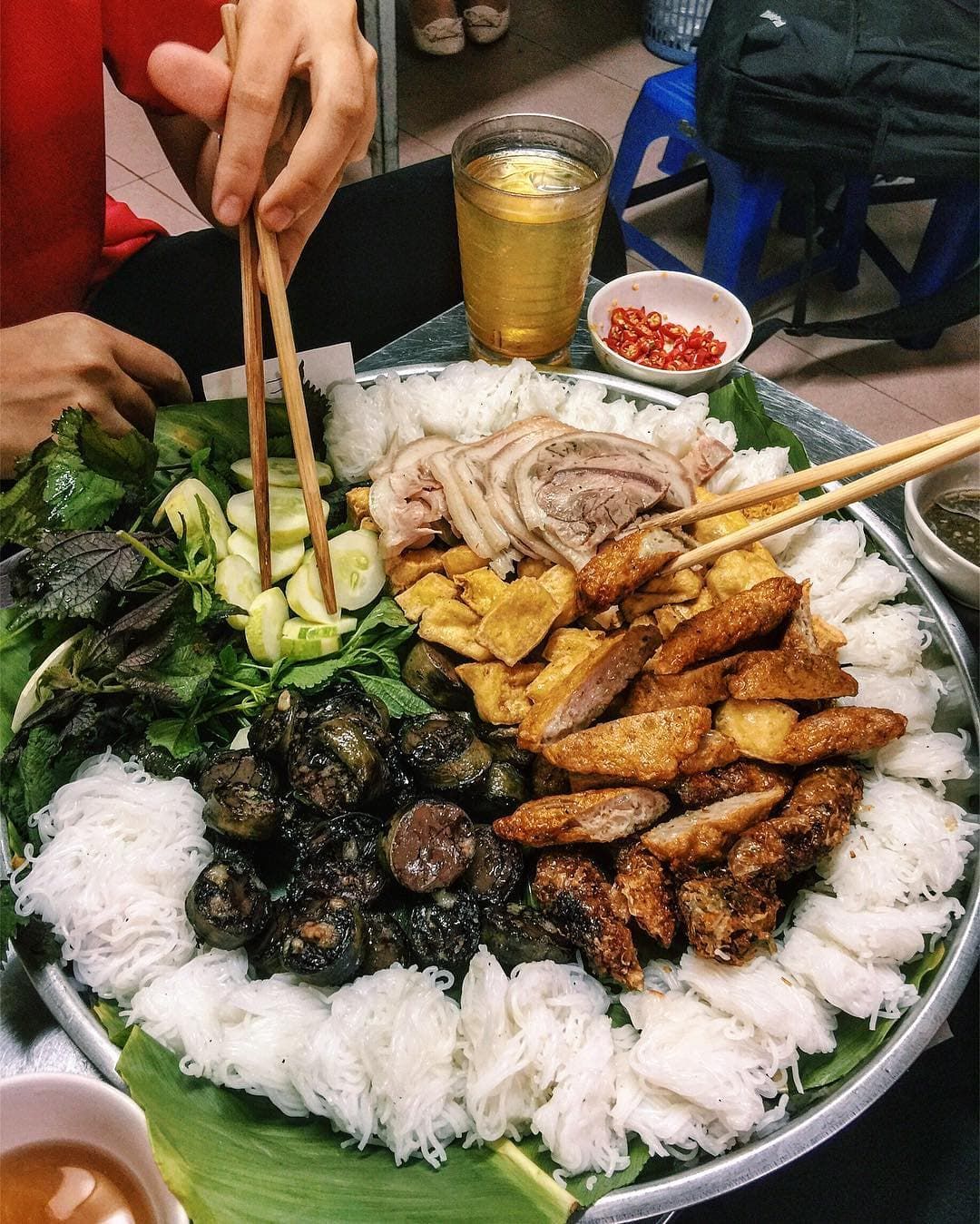 The main ingredients of the dish include noodles, fried tofu, grilled pork paste with young rice, boiled pork and shrimp paste. Tofu is often deep-fried as a whole, then is cut into bite-sized pieces. The pork used for the dish is bacon, which is boiled until well-cooked and then thinly sliced. While noodles are cut into bite-sized pieces, the pork paste with young rice is grilled until it has a golden brown colour. It is noted that some restaurants can offer pork offal.

The highlight of this Hanoi noodle dish lies in the shrimp paste and this is also the feature for diners to evaluate whether the restaurant is good or not. Shrimp paste is mixed meticulously with lard, sugar, kumquat and hot chilli, then is whisked until foamy. A standard shrimp paste is neither too salty nor too sweet, but has a typical smell, so each restaurant has its own recipe for making the paste. It is noted that you can enjoy the dish with fish sauce mixed with garlic and hot chilli. 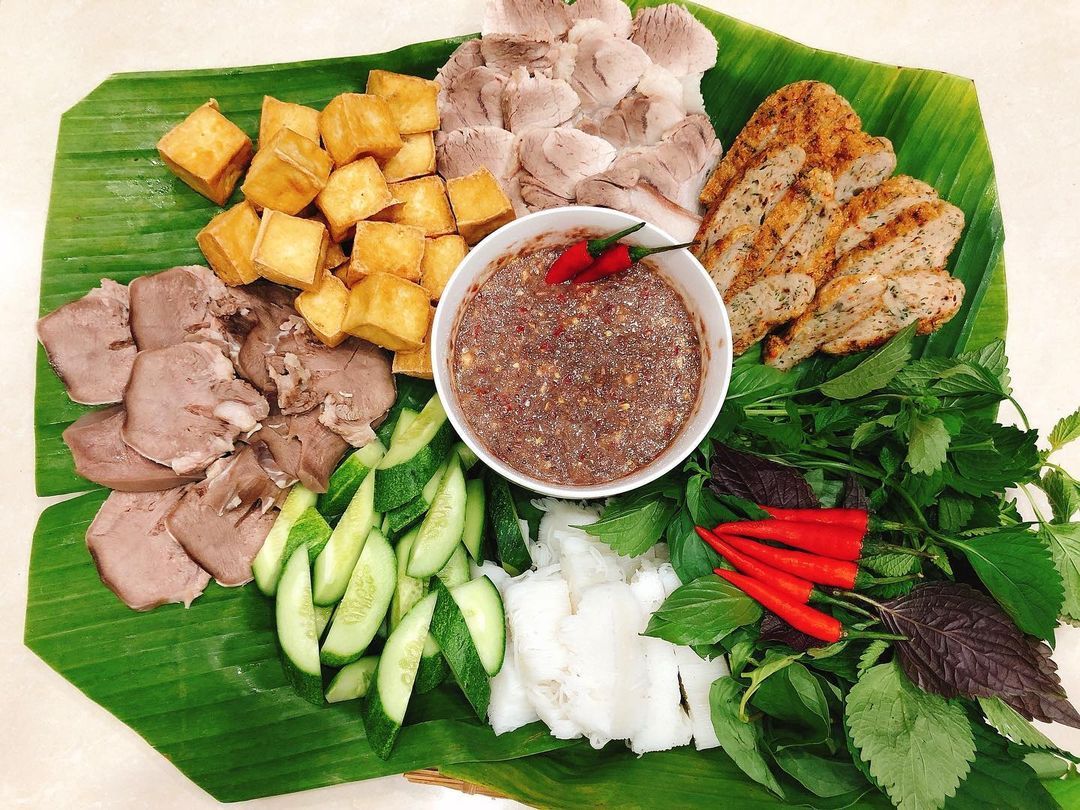 When eating, you will be able to feel the rich flavour of the shrimp paste, the greasy taste of the pork, grilled pork paste with young rice, pork offal and noodles. Notably, some perilla, marjoram and cucumber can promote the tasty flavour and freshness of the dish, so it is recommended that you should include these with your meal as well. 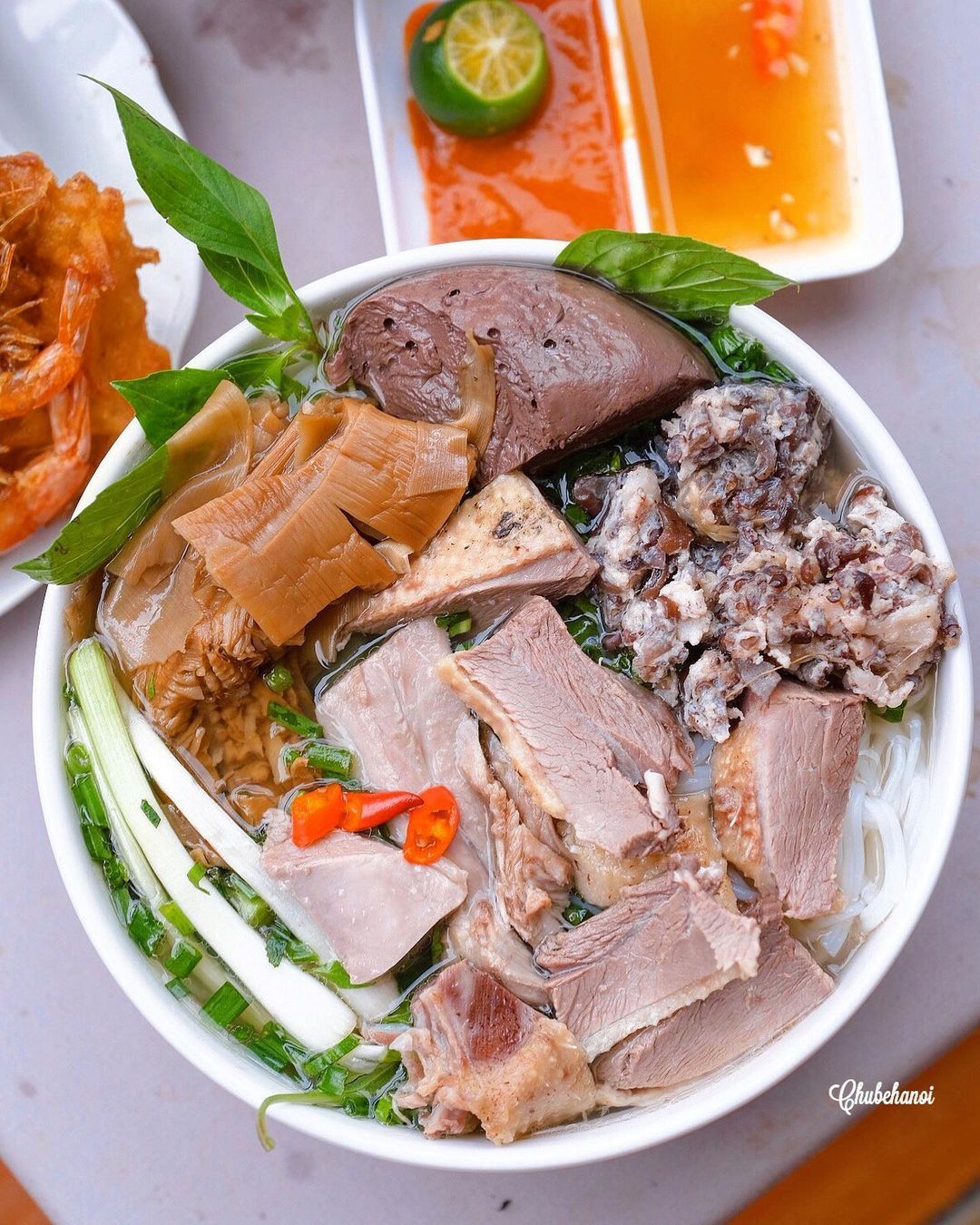 Bun Ngan is best enjoyed in winter - in the cold weather of Hanoi. Photo: @chubehanoi

Bun Ngan is also one of the popular dishes in many provinces of Vietnam, but Hanoi is still the most famous place for having the authentic flavour of the dish. Bun Ngan is probably best enjoyed in winter - in the cold weather of Hanoi.

The most important thing in the bowl of Bun Ngan is the siamese duck meat. To have sweet meat, they often choose the slightly old siamese ducks, and during the boiling process, the cook often adds some spices, especially grilled shallots, to raise the aroma. Next, the duck’s breast is thinly sliced; other parts of the body are cut into bite-sized pieces, while the neck, legs, and wings are stewed to make broth. Notably, they often add some dried mushrooms to make the broth more fragrant and sweet. 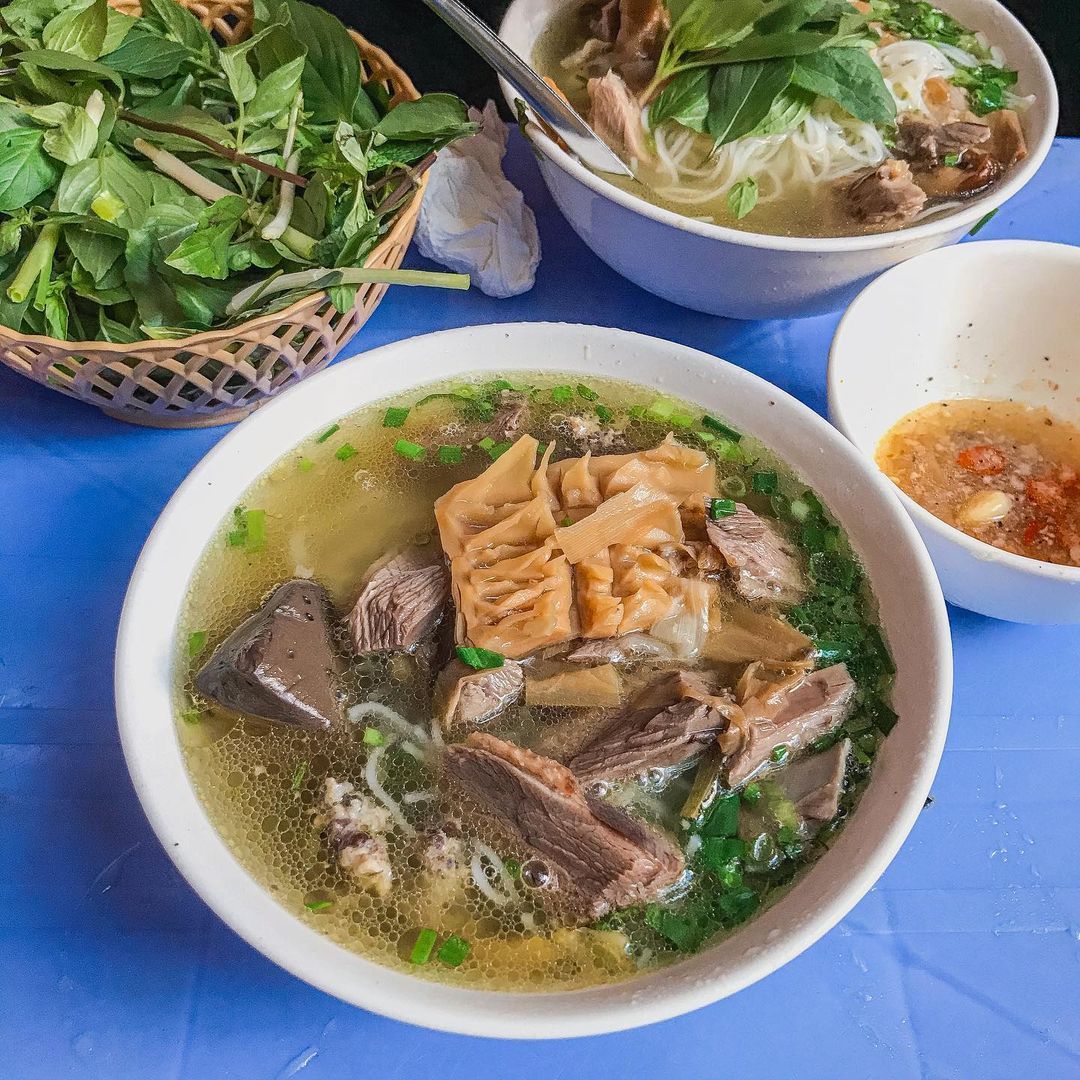 Bun Ngan is often served with dried or fresh bamboo shoots, but the former is preferred. Photo: @nhsfoodgram

Bun Ngan is often served with dried or fresh bamboo shoots, but the former is preferred. Bamboo shoots are washed, soaked and boiled several times, then rinsed under cold water. Next, they are torn into bite-sized pieces and stir-fried with spices and some fat in the pot of broth to enhance the flavour. Finally, put the stir-fried bamboo shoots into the pot of broth and boil for about 30 minutes to make them soft, then turn off the gas stove.

A bowl of Bun Ngan has noodles (the type with small fibers), a few pieces of siamese duck meat on top and the broth. The highlight of this dish is a bowl of fish sauce or soy sauce with garlic and hot chilli to dip with duck meat. When enjoying, you will feel the perfect combination of flavours from noodles, light sweet broth, fatty siamese duck meat, crispy bamboo shoots and herbs like basil and rice paddy herb to enhance the aroma. Some places will offer pig blood curd and meatballs to make the toppings more diverse and attractive. 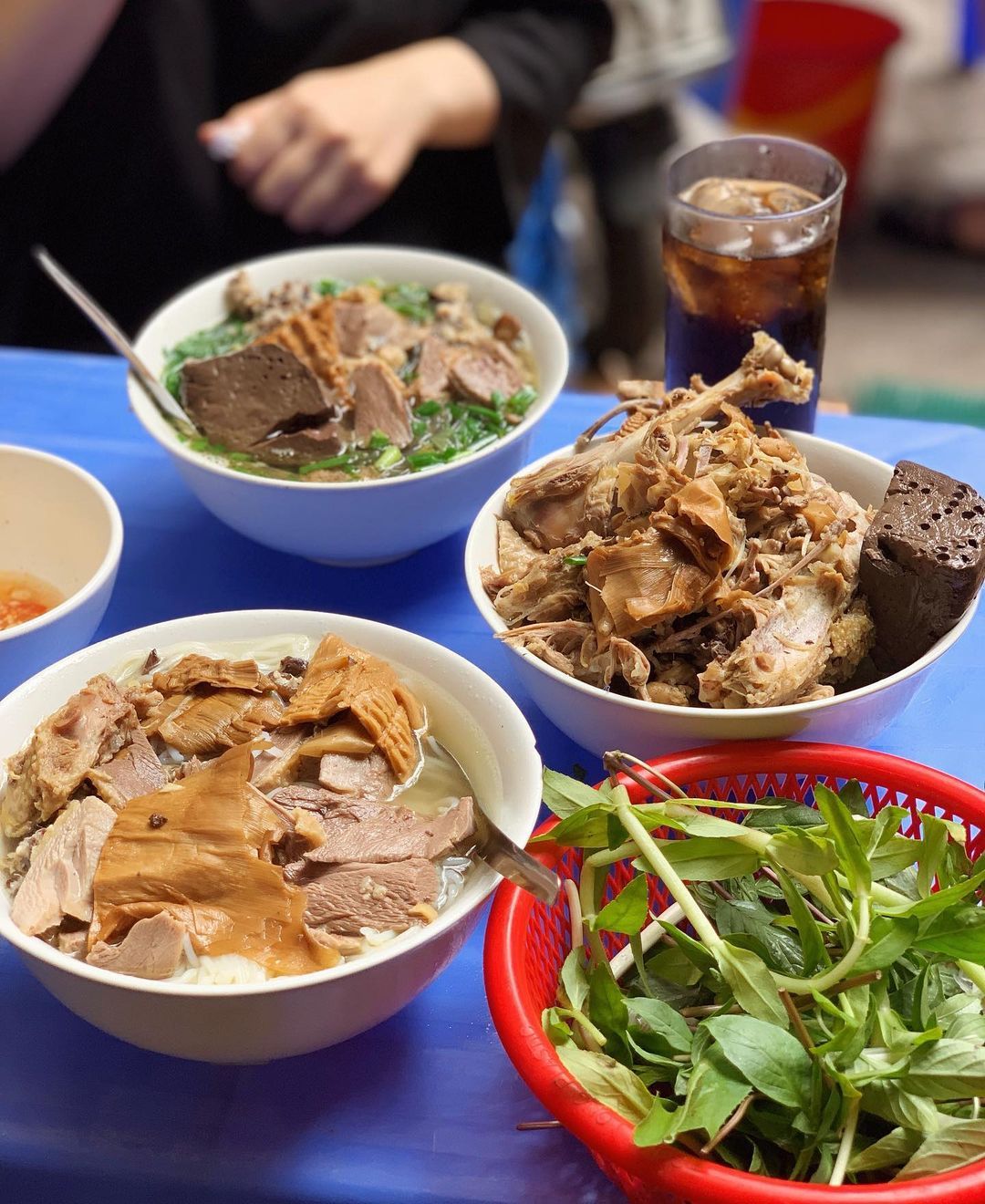 Another dish that makes up the “Hanoi noodle brand” is Bun Oc - no matter where you come from, you must try a bowl of Bun Oc once to feel the authentic “flavour of the capital”. A special feature of the dish that differs from other types of noodle soups is that the broth has a sour taste from thickened vinegar (dấm bỗng). The pot of broth must be kept hot with red tomatoes on top, while the snails in the bowl of noodles (the type of “ốc vặn” in Vietnamese) are steamed, separated from the meat and put into a bowl. Bun Oc should be eaten with hot chilli paste, chopped raw vegetables and spring onions. 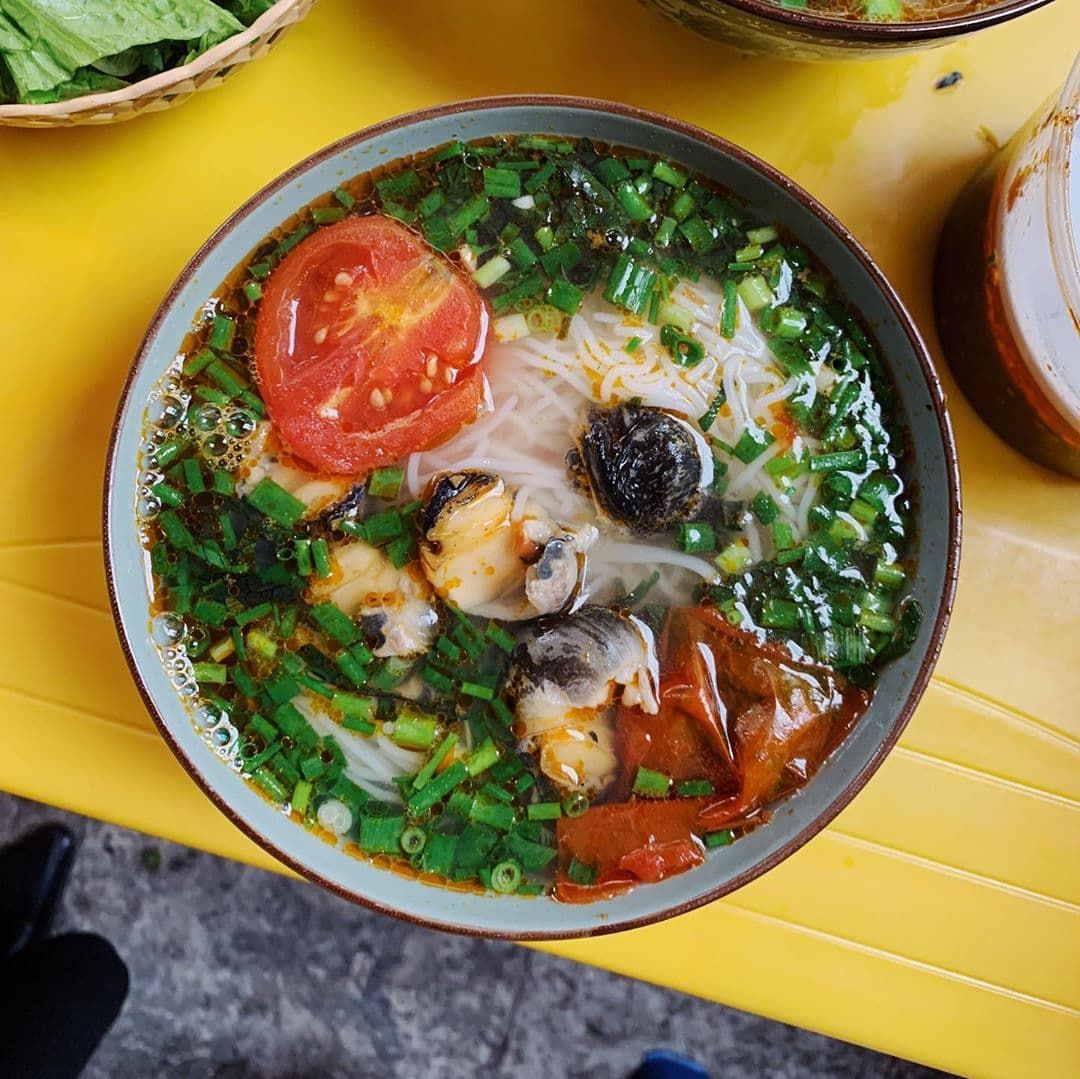 A bowl of Bun Oc becomes fragrant and fresh thanks to the thickened vinegary. Photo: feedy

In addition to the Bun Oc served hot, the cold version of Bun Oc is also a typical Hanoi noodle dish which is especially preferred on hot summer days. As all ingredients in the dish are cold - cold vermicelli, cold snails and cold sauce - it is called the “cold Bun Oc”. Try the cold snail noodle soup once and you will definitely fall in love with this very strange noodle dish of Hanoi. 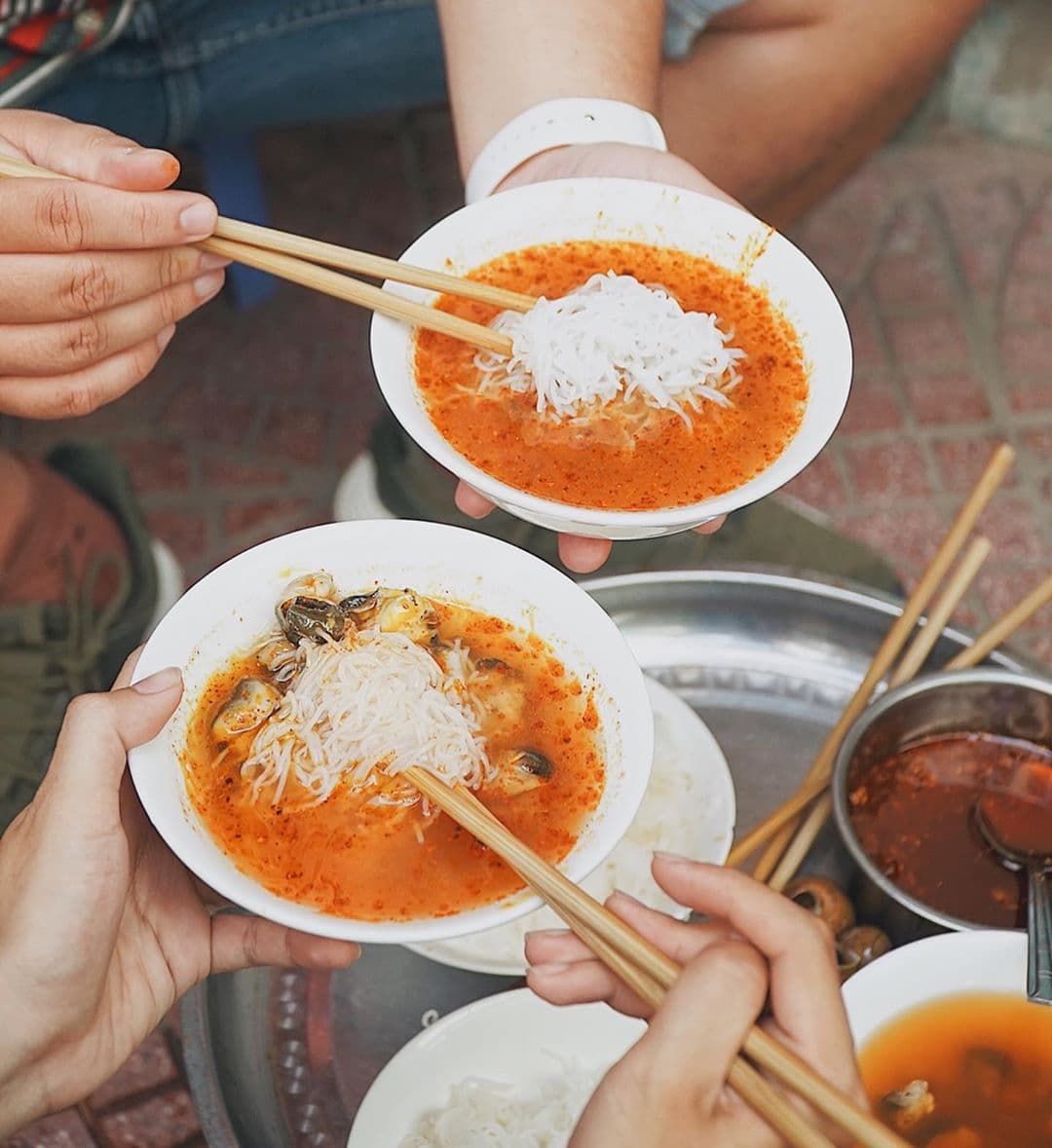 A bowl of cold Bun Oc for a hot summer day. Photo: ivivu

If you plan to come to Hanoi, do not forget to enjoy the above-mentioned noodle dishes, each of which has its own flavour and characteristics, but they all represent the diverse cuisine of “the land of thousands of years of civilization”.