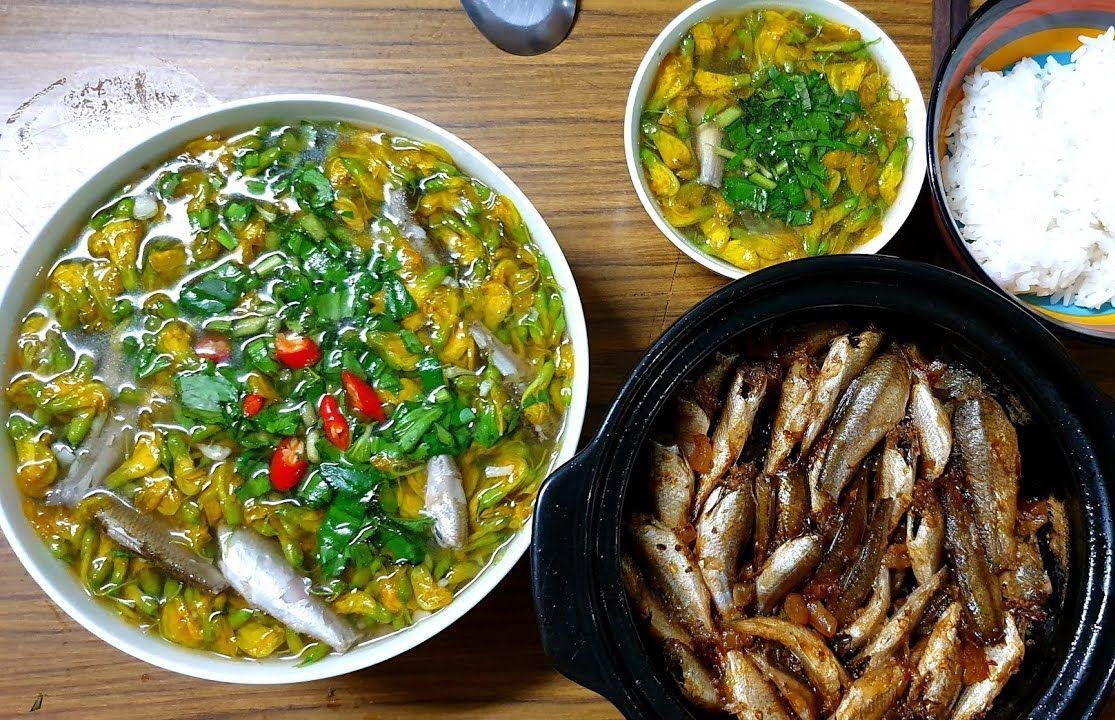 Only in the floating season of Southwest Vietnam can you enjoy these rustic yet unique dishes.

Linh fish soup with sesbania flowers is a famous dish of Southwest, especially in the floating season. “Linh fish” is a small white fish that often appears in fields, canals or rivers from late September to early October. Linh fish is the most delicious in late September (the beginning of the fish season) as it is small in size, with sweet meat and soft bones. At the same time, sesbania flowers begin to bloom, and the locals will “combine” them with Linh fish to make a tasty soup. 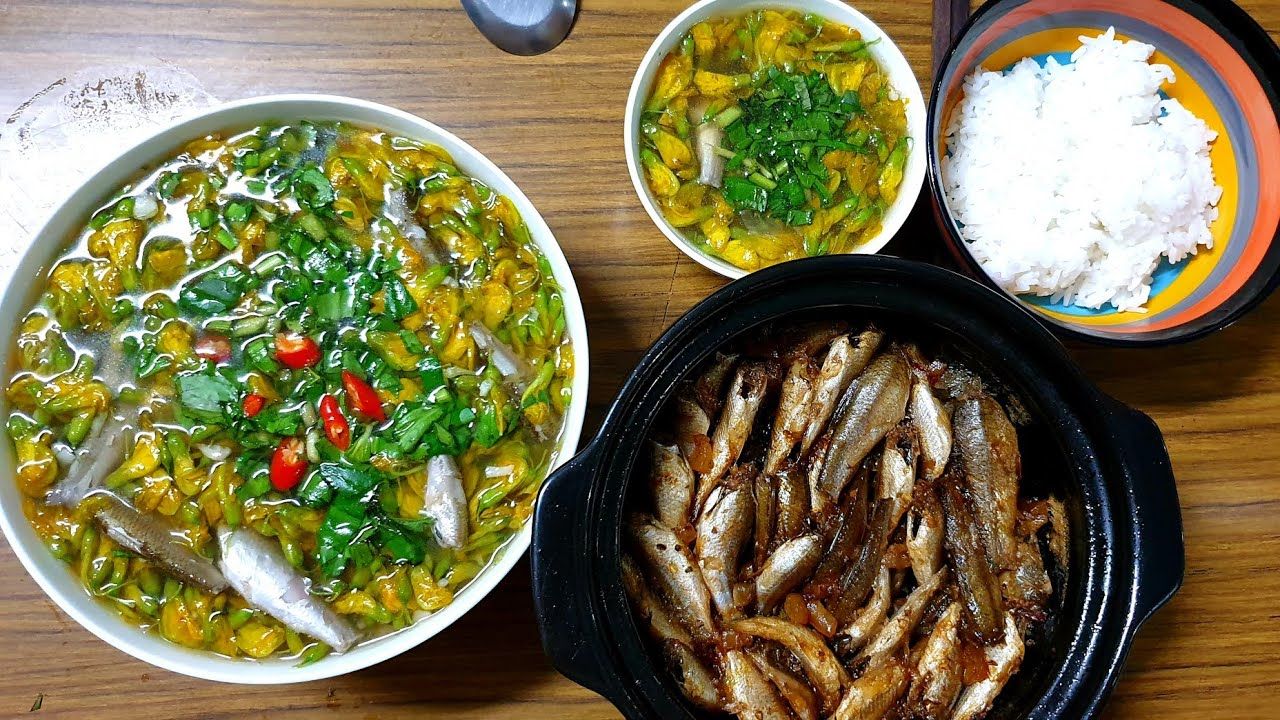 To make this dish, people will wash the ingredients and drain the water. Next, boil some water with young tamarind, then take out the tamarind juice and put it in the pot of broth. When the broth is boiling, add the Linh fish, salt, fish sauce, broth mix, and sugar to taste. Next, add fried shallots, garlic and sesbania flowers and cook until the dish is well-done, then you can add some coriander, chopped basil, hot chilli and turn off the stove.

Sesbania flowers with a bright yellow colour and crispy texture, when combined with the sweetness of Linh fish and typical sweet and sour soup, will create a harmonious taste. It is noted that the soup can be served with rice or noodles.

Water lilies often grow in the Mekong Delta, especially in Dong Thap province. This kind of flower usually blooms in the floating season of Southwest Vietnam. The water lily is not only a kind of flower that embellishes the natural “picture” here, but it also is used as an ingredient in the dish “water lily  with stewed fish sauce” (Bong sung mam kho). 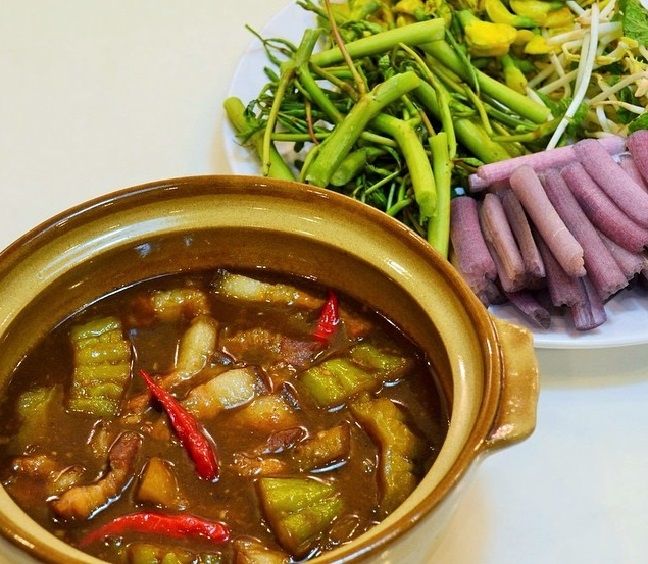 Water lilies are carefully picked and washed, but only the stalks are used to cut into small pieces to dip with the stewed fish sauce later. The fish sauce used to stew is also carefully selected, but the common types are the ones made from Linh fish or Snakeskin gourami. Next, filter the fish sauce, add fresh coconut water, boil it and remove the residue if necessary. After that, add minced lemongrass and chilli and season to taste. Next, add bite-sized ​​pork belly, shrimp or pangasius krempfi to add sweetness and wait until the ingredients are well-cooked.

The dish will not be complete without a plate of raw vegetables, including water lily, sesbania flowers, chopped water spinach and shredded ​​banana flowers. Notably, this dish can be enjoyed with rice and noodles. The harmony between the richness of the fish sauce, the greasiness of the bacon, shrimp and fish, combined with the freshness of the water lily creates a special taste that can captivate you from the first bite.

Bun Nuoc Leo is a special dish of the Khmer people and very popular in the provinces of the Mekong Delta. As compared to other types of noodle soups, Bun Nuoc Leo has additional ingredients, which are fish sauces made from snakeskin gourami and Linh fish to create a unique flavour.

The ingredients to cook Bun Nuoc Leo include snakehead fish, shrimp, roasted pork and the above-mentioned fish sauces. Firstly, boil the snakehead fish, remove the bones, and cut the meat in large pieces. Next, boil the shrimp and remove the shell; at the same time, cut the roasted pork into bite-sized pieces. It is noted that fish and shrimp are both boiled in a pot, but you can add fresh coconut water there to create the sweetness. The fish sauces of snakeskin gourami and Linh fish are boiled and filtered in another pot, then you can pour it into the pot of broth, season to taste and the dish will be ready. 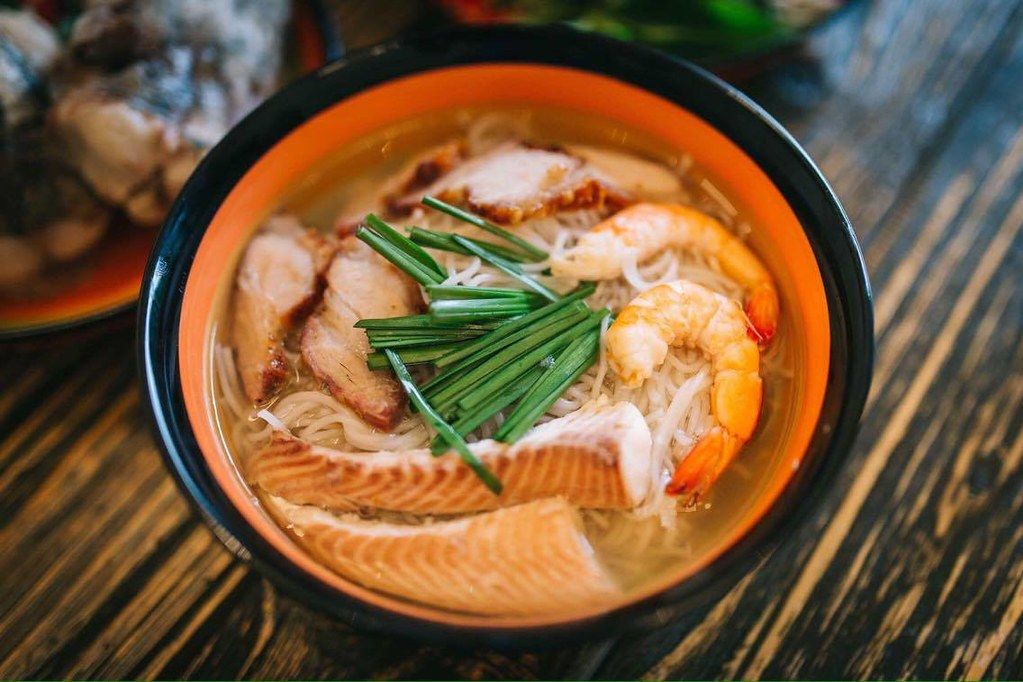 Bun Nuoc Leo is a traditional dish of the Khmer people. Photo: feedy.vn

A standard bowl of Bun Nuoc Leo will have fragrant white noodles underneath and toppings composed of a few pieces of snakehead fish, shrimp, roasted pork, some chopped chives and the broth. When enjoying, you will be able to feel the taste of rich broth with the typical smell of fish sauce, chewy rice noodles, the greasy taste of bacon and shrimp and of course the special mild onion flavour of chives.

In the floating season, not only do sesbania flowers bloom yellow all over the place, but there are also a lot of tiny shrimps (called “tep rong” in Vietnamese) that are both fresh and tender. These two ingredients are combined to create a very special salad that is nowhere to be found, except for Southwest Vietnam. In addition to these two main ingredients, this dish also has water lilies, Vietnamese coriander and basil.

To make the salad, you need to first wash sesbania flowers and drain the water. For water lilies, take the stalks, remove the covering and cut into bite-sized pieces, while the tiny shrimps are cleaned and deep-fried until they have a golden brown colour. Next, mix shrimps, sesbania flowers, water lilies, chopped herbs and sweet and sour fish sauce well until the ingredients absorb the species, then the dish will be ready. This salad has the rich taste of tiny shrimps and bitterness of sesbania flowers, but it does give you a characteristic sweet aftertaste. Notably, the freshness and crisp texture of water lily make the dish more tasty. 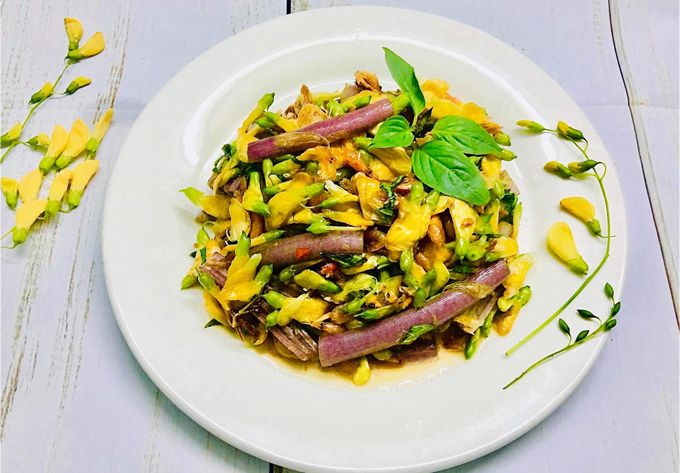 Sesbania flowers and tiny shrimps salad is a unique dish that is only available in Southwest Vietnam during the floating season. Photo: ngoisao.net

Southwest Vietnam not only attracts tourists to the charming scenery of rivers, but also the simple yet unique dishes such as the Linh fish soup with sesbania flowers, Nuoc Leo Noodle Soup, water lily with stewed fish sauce, and sesbania flowers and tiny shrimps salad.