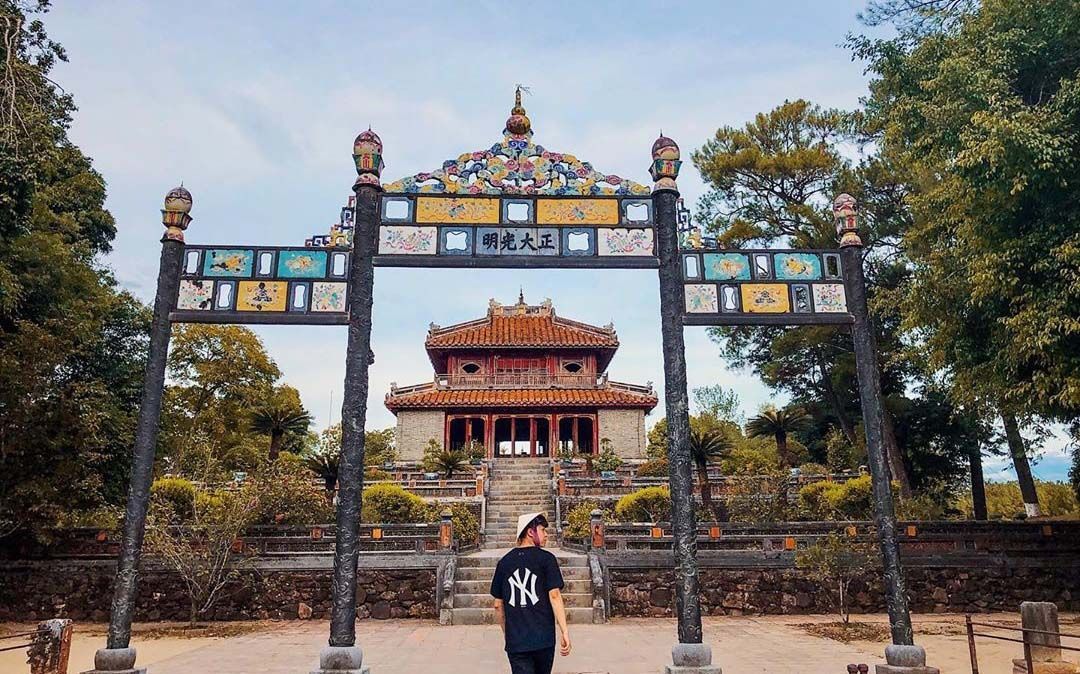 While the tomb of King Khai Dinh is a combination of Eastern and Western architecture, the Tomb of King Minh Mang features a traditional Confucian beauty, which will definitely impress you from your first sighting.

When was Minh Mang’s Tomb constructed?

The real name of King Minh Mang (1791 - 1841) is Nguyen Phuc Dam, who was the fourth son of King Gia Long - the second king of the Nguyen Dynasty. The king reigned from 1820 until his death and was honoured with the title of Nguyen Thanh To.

Since he was a child, King Minh Mang was a clever, intelligent, willful and disciplined person, who was a very erudite man in the field of Confucianism due to being a devout Confucianist. As Ming Mang did not like the Western culture, his thinking and constructions were heavily influenced by Confucianism.

After ascending the throne, King Minh Mang made great contributions to the country's reform and changed the country's name from Vietnam to Dai Nam. In addition, he expanded the territory of the country by defeating Siam, protected Chan Lap, occupied Nam Vang area (Phnom Penh today) and renamed it “Tran Tay Thanh”. Therefore, at that time, Dai Nam country had a larger territory than it has now. 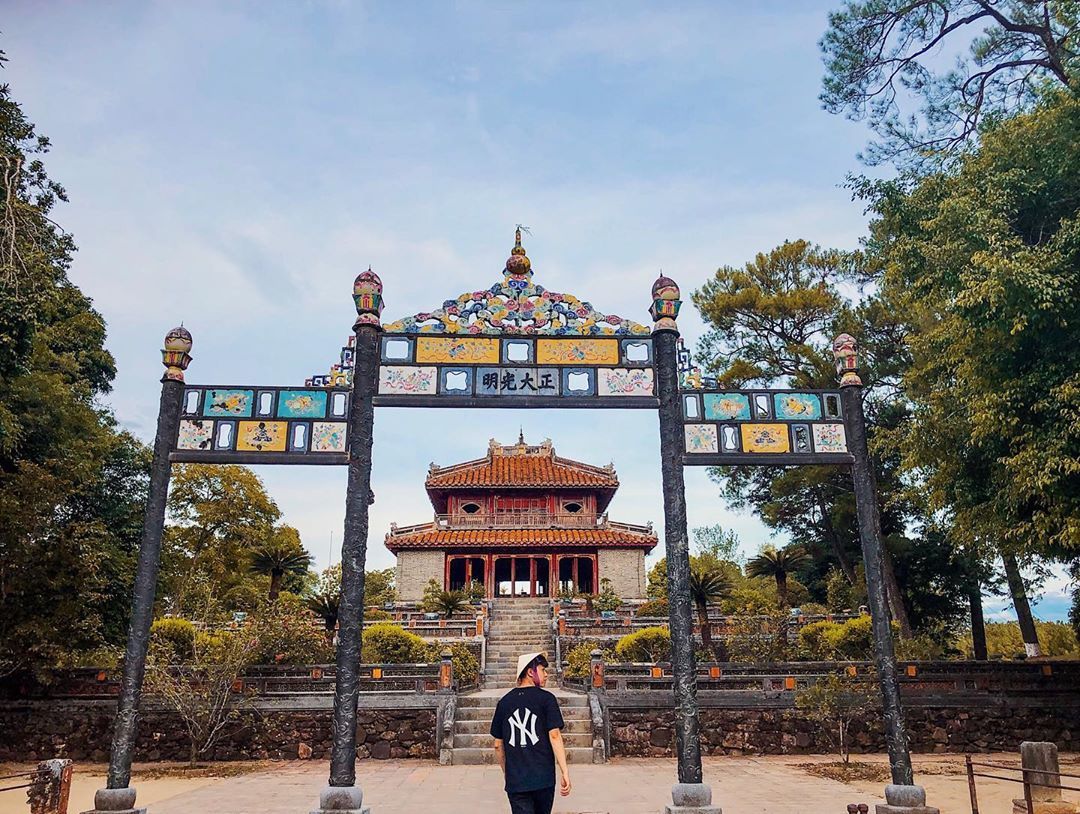 King Minh Mang's Tomb is called “Hieu Lang”, which is located on Cam Khe mountain, Huong Tho commune, Huong Tra district, Thua Thien Hue province. The work was built upon the request of King Minh Mang in April 1840. The king put a lot of effort into this tomb - from the location to the design - so he focused on each stage of building the tomb. For example, every design of the tomb had to be approved by the king himself. 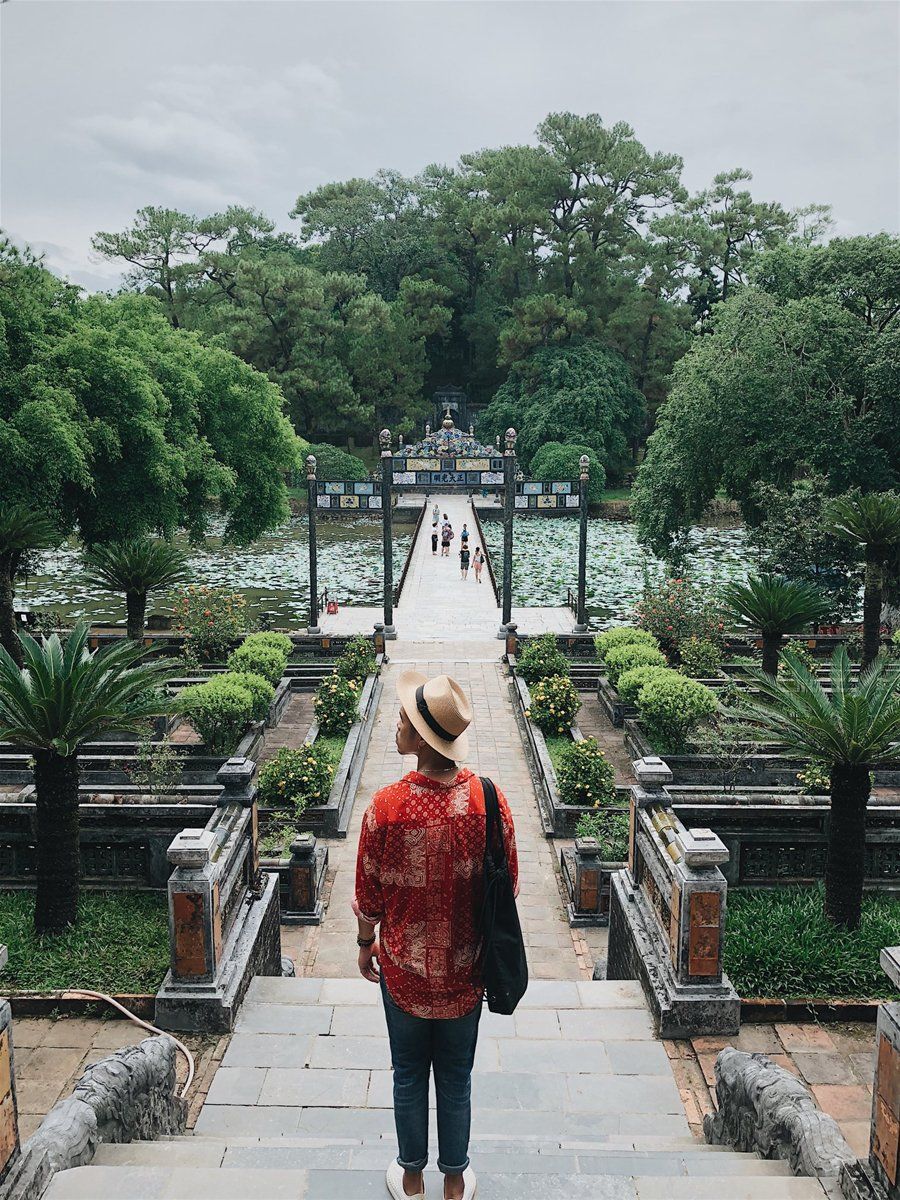 The designs of the mausoleum must be approved by the king himself. Photo: kenh14.vn

In 1841 when the tomb was still being constructed, the king fell seriously ill and died. According to the will of his father, his son (King Thieu Tri) continued to build the work and buried the remains of King Minh Mang in Buu Thanh in the same year. Two years later (1843), the Minh Mang Tomb was officially completed.

The scale and structure of Minh Mang's Tomb

Minh Mang’s Tomb has a symmetrically balanced architecture around an axis which is the Shinto road and goes through works such as: the main gate, courtyard, stelae house, sacrificial yard, Hien Duc Gate, Sung An palace, Trung Minh, Minh Lau, Tan Nguyet Lake, Quang Minh Chinh Truc Three-door Gate, Trung Dao bridge and Buu Thanh (the tomb of King Minh Mang). The area has about 40 works of all sizes, covering an area of ​​18ha and surrounded by La Thanh (a rampart). 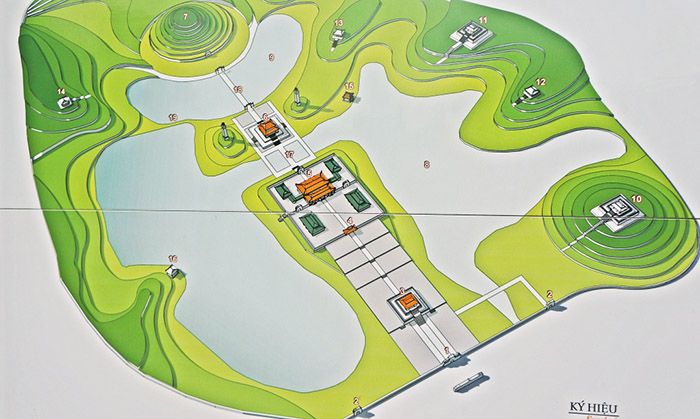 Minh Mang’s Tomb is considered the mausoleum with the most majestic and standard design in the Nguyen Dynasty's architecture. Viewed from above, King Minh Mang's Tomb resembles a figure with his head resting on Kim Phung mountain, his legs stretching out at the confluence of rivers in front of him, and the two halves of Trung Minh lake looking like naturally hanging hands. Perhaps this was the intention of King Minh Mang to build his final resting place like this. From the outside to the inside of the tomb, the works are distributed on three parallel axes, taking Shinto as the central axis with a length of 700m. The works start from Dai Hong Gate to La Thanh, which is behind the king's tomb. Interspersed between the works are the hills covered with green pine trees and lotus lakes as beautiful as a painting. 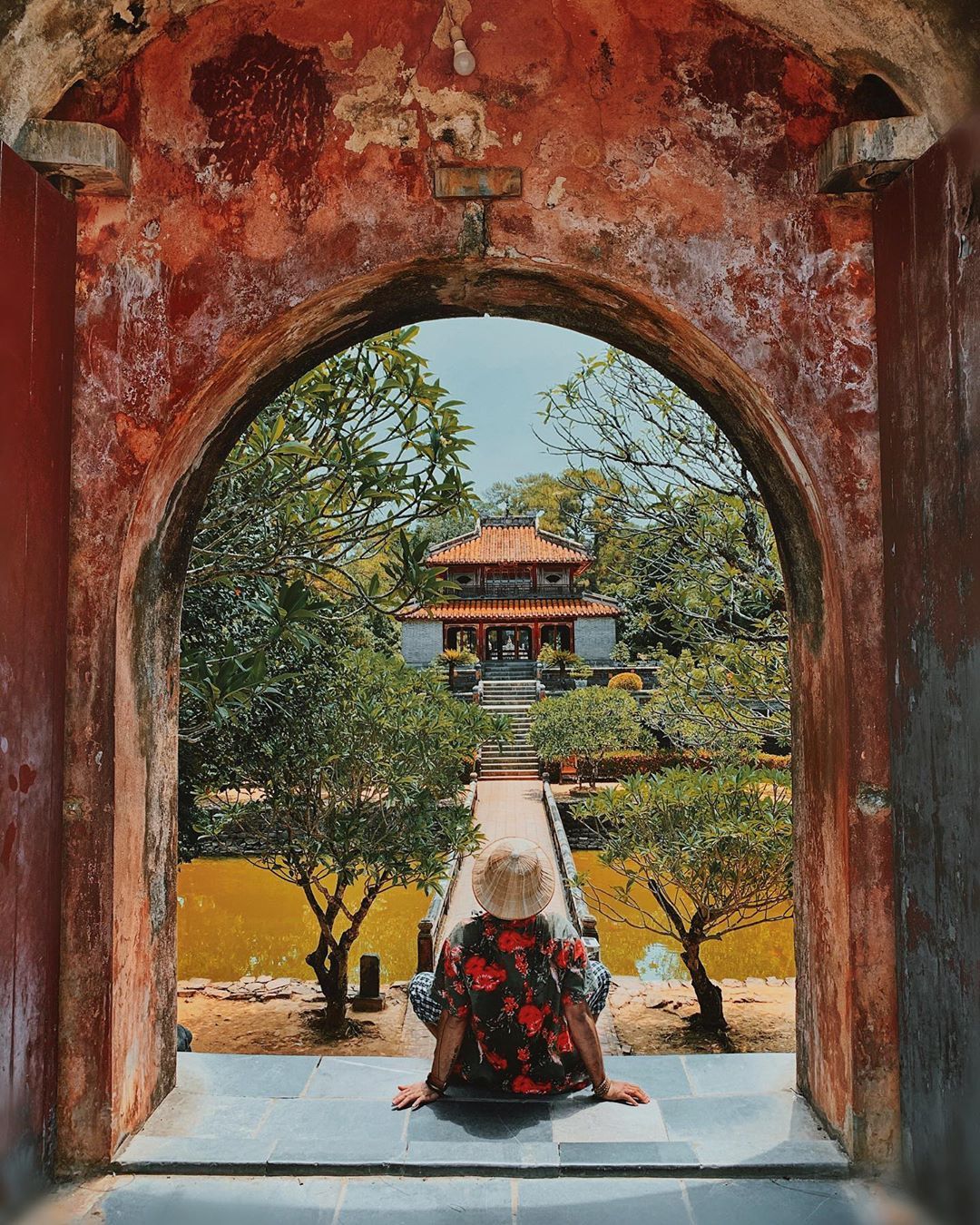 The ancient look of the mausoleum in a green space. Photo: @cuongkhii

This is the main gate of the mausoleum with a height of 9m, a width of 12m with a design characterised by the architecture of the Nguyen Dynasty. The gate has three doors with 24 roofs decorated with unique and delicate motifs. Notably, the main door (among the three doors) was only opened once when the coffin of King Minh Mang was brought into the mausoleum. Those who want to enter the mausoleum have to go through two side gates, namely Ta Hong Gate and Huu Hong Gate. 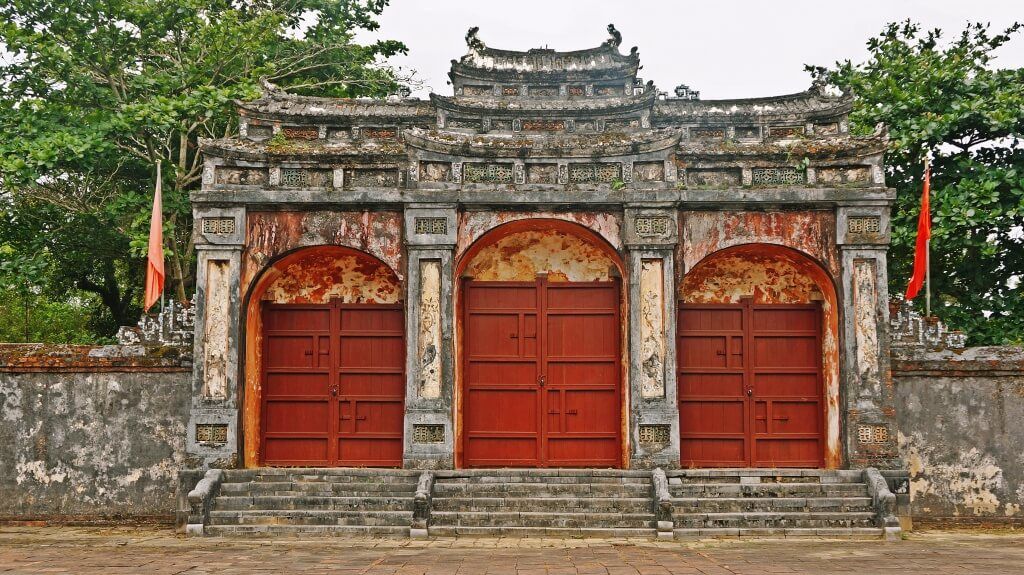 From Dai Hong Gate, you will come to a large yard with two rows of statues of mandarins, elephants and horses, which is called “Bai Dinh”. Behind this work is “Bi Dinh” with a stele called "Thanh Duc Than Cong" carved with the writing of King Thieu Tri about the biography and merits of his father - King Minh Mang. 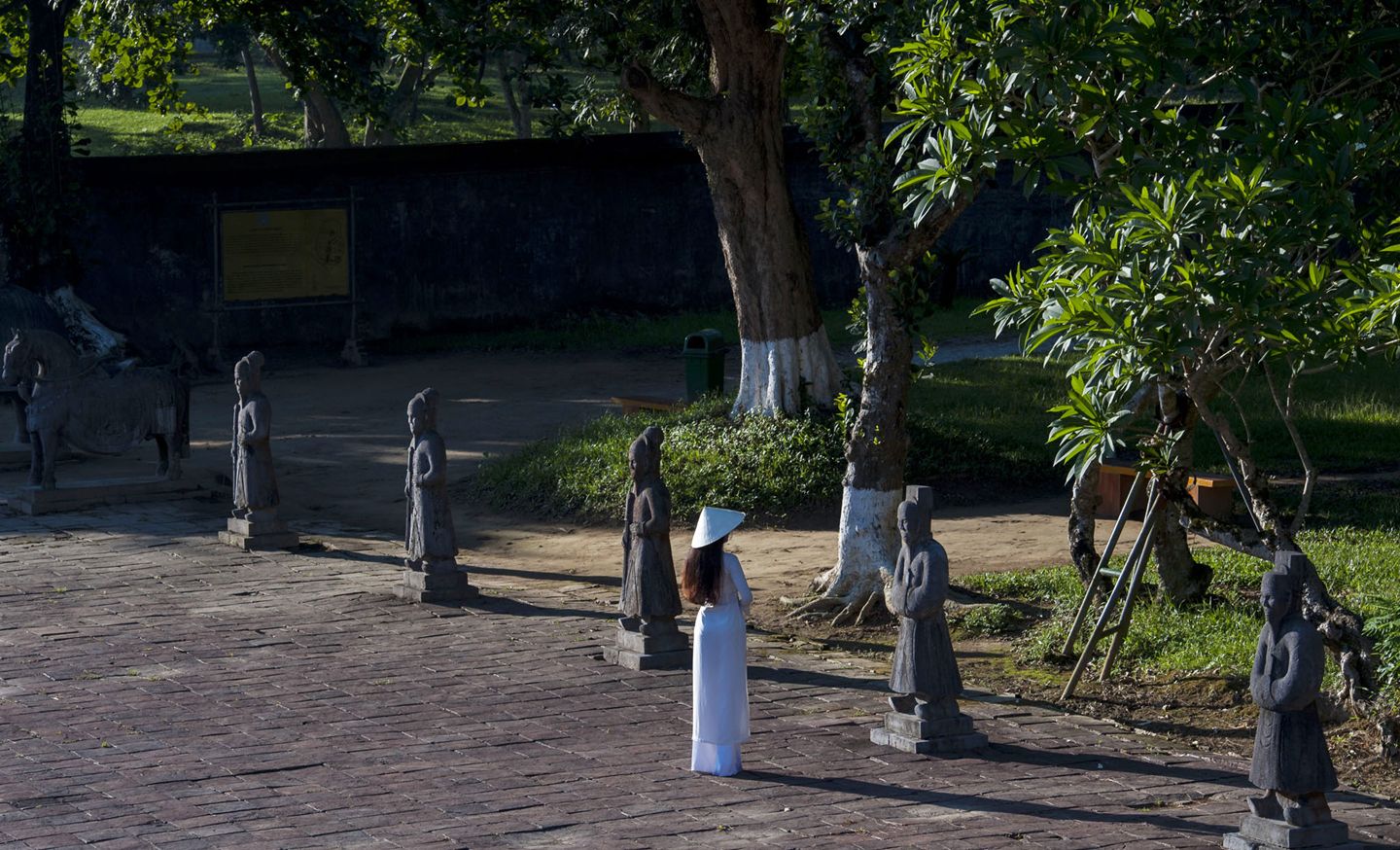 Bai Dinh is a place with statues of mandarins. Photo: thanhnien.vn 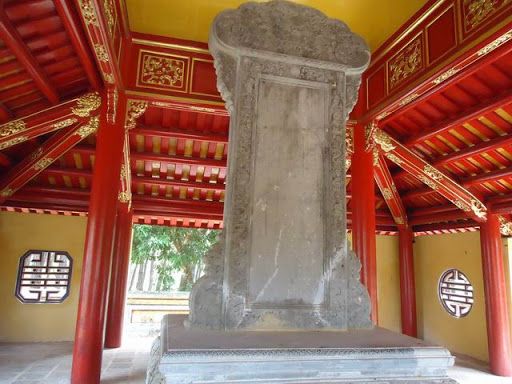 The stele in Bai Dinh records the history and merits of King Minh Mang. Photo: tienphong.vn 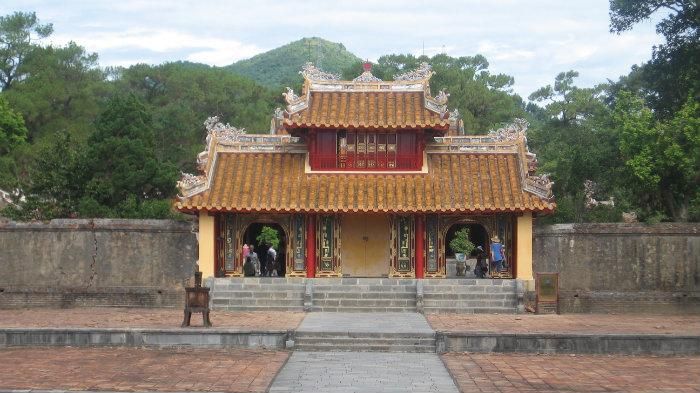 Tam Dien is a place of worship for the king, which was built on a square piece of land symbolising “the god of the earth”. The main gate leading to this area is called Hien Duc Gate, and the central area of this work is Sung An Palace, where the spirit tablets of the King and Queen are put. The building is designed with the red-brown colour to create a sense of majesty. At the end of this area is Hoang Trach Gate with the gentle scent of wild flowers. 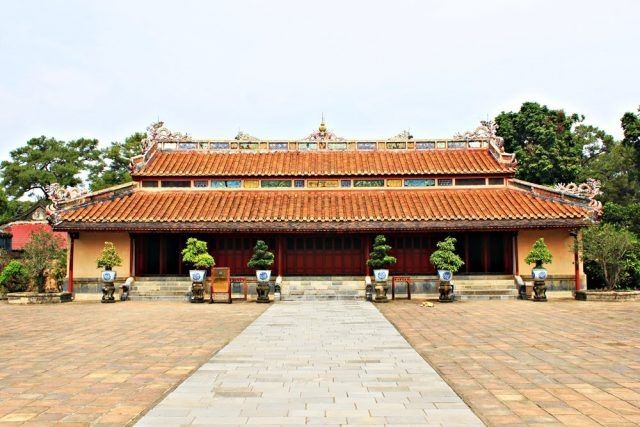 Sung An Palace is the central work of Tam Dien. Photo: dulich.petrotime 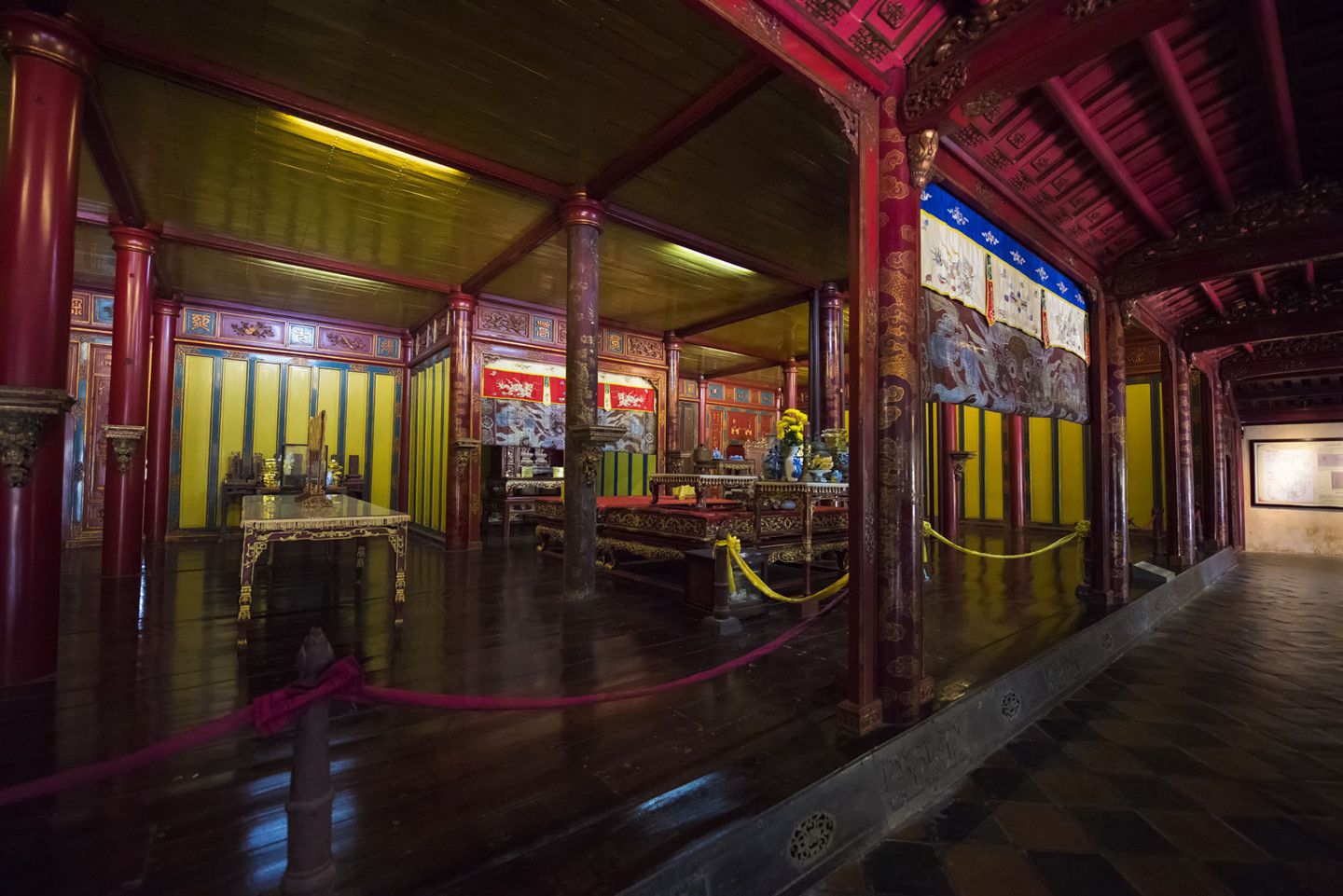 Inside the shrine, there are spirit tablets of the King and Queen. Photo: ivivu.vn 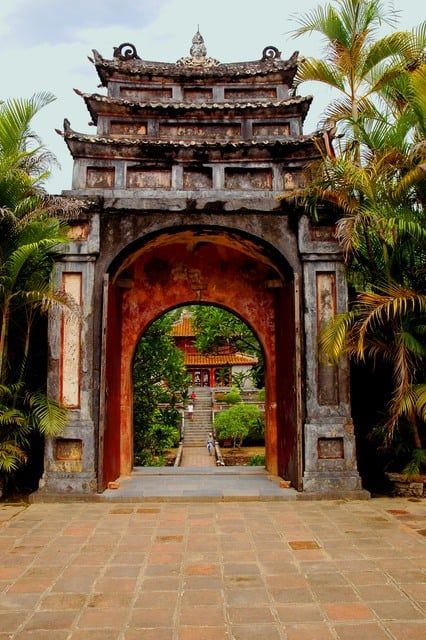 Hoang Trach Gate at the end of the area. Photo: dulichhue

While Tam Dien is majestic and quiet, you just need to pass through the next 17 stone steps and you will see a completely different space - a vast green colour as a fairyland - with lush green trees, large lakes with lotus scent, and the sounds of birds and wind.

There are three bridges here, namely Trung Dao, Ta Phu, and Huu Bat, spanning Truong Minh Lake and leading to Minh Lau Pavilion which means “the bright pavilion” in Vietnamese. This area was the king's resting place after his time at the court and is also where the king enjoyed the moon at night. The pavilion features typical Vietnamese ancient architecture with a square shape, two floors and eight roofs. 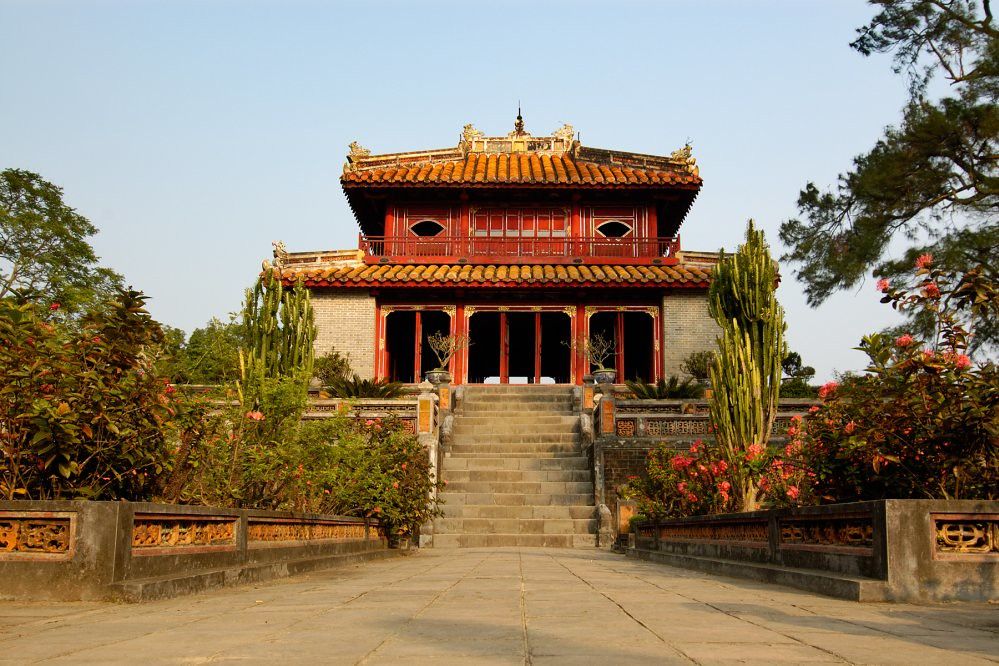 The lake is considered a symbol of the moon embracing Buu Thanh. Pass through 33 more stone steps and you will come to the king's burial area located in the middle of the hill. 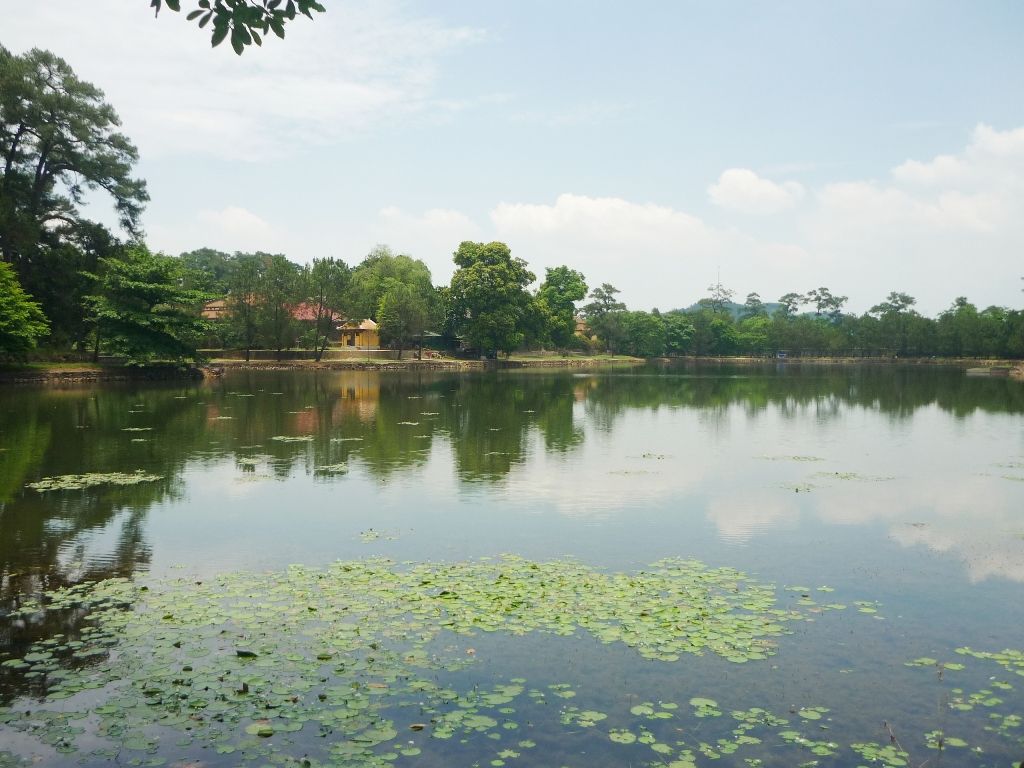 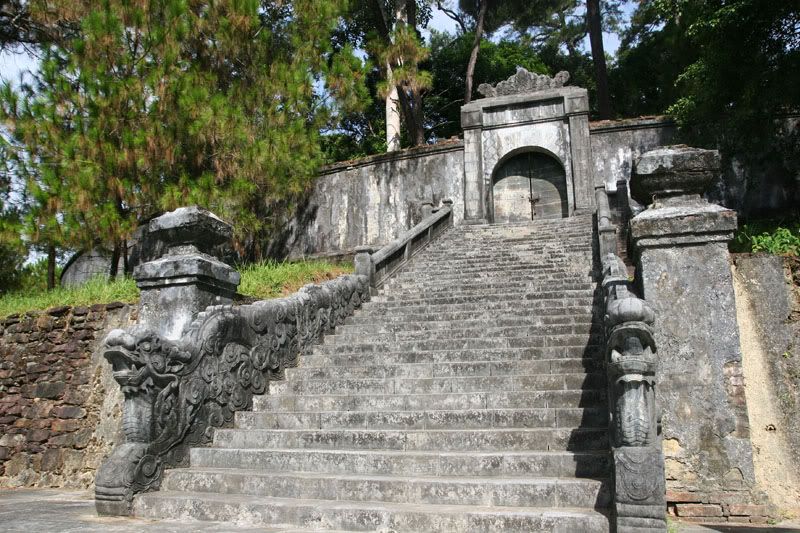 Behind the gate is the burial place of the king. Photo: wiki

Another option is that you can buy a 1-day tour at a cost of only about VND 250,000/person. With this tour, you will be able to fully visit the famous mausoleums as well as other unique attractions in Hue. 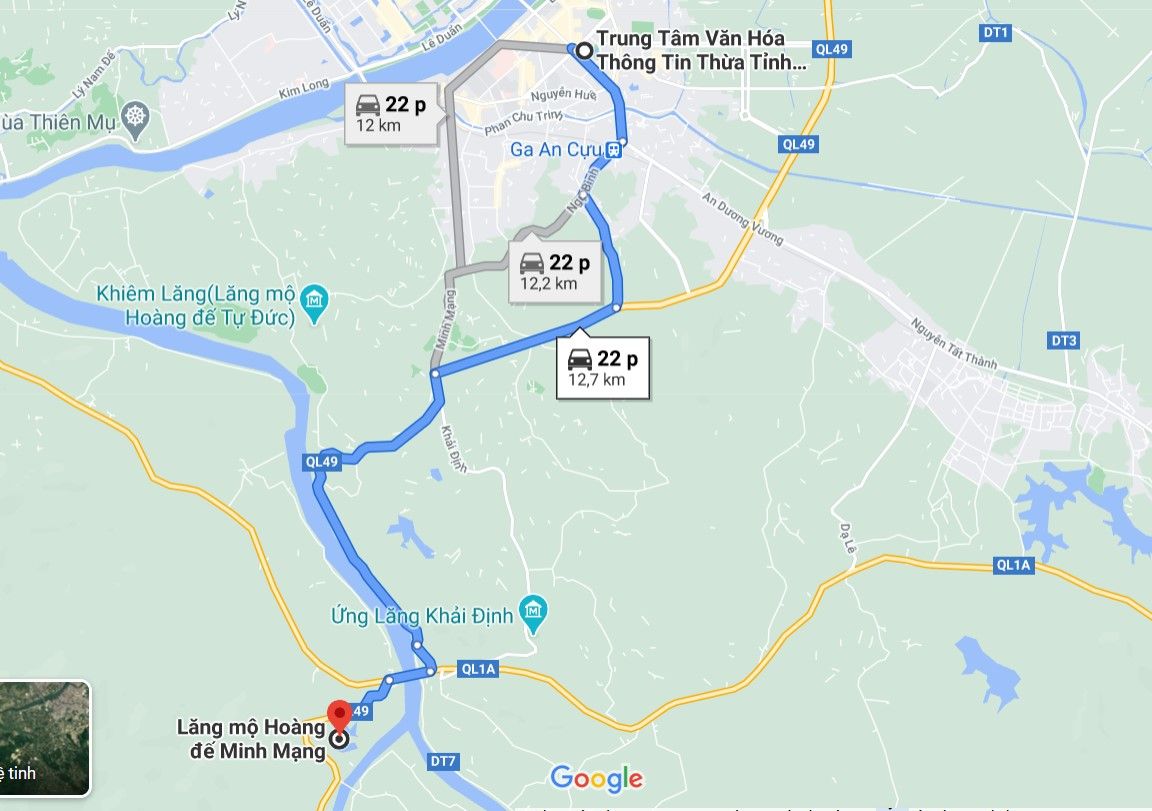 Minh Mang’s Tomb is one of the destinations with historical values that you should not ignore when coming to Hue - to immerse in a space that is solemn yet romantic, idyllic yet charming.