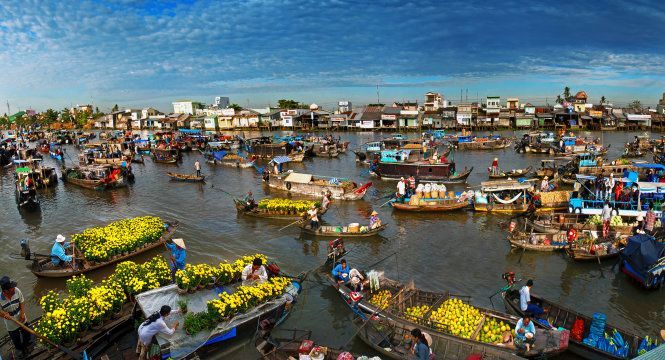 Four destinations featuring the “Southwest beauty of Vietnam” in Can Tho

Despite being quite a big city of Vietnam, Can Tho has a typically peaceful beauty of Southwest Vietnam. Here are the four must-visit places in this region. 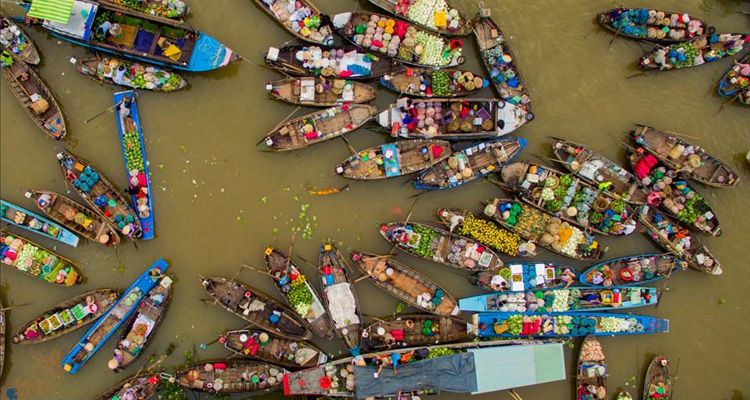 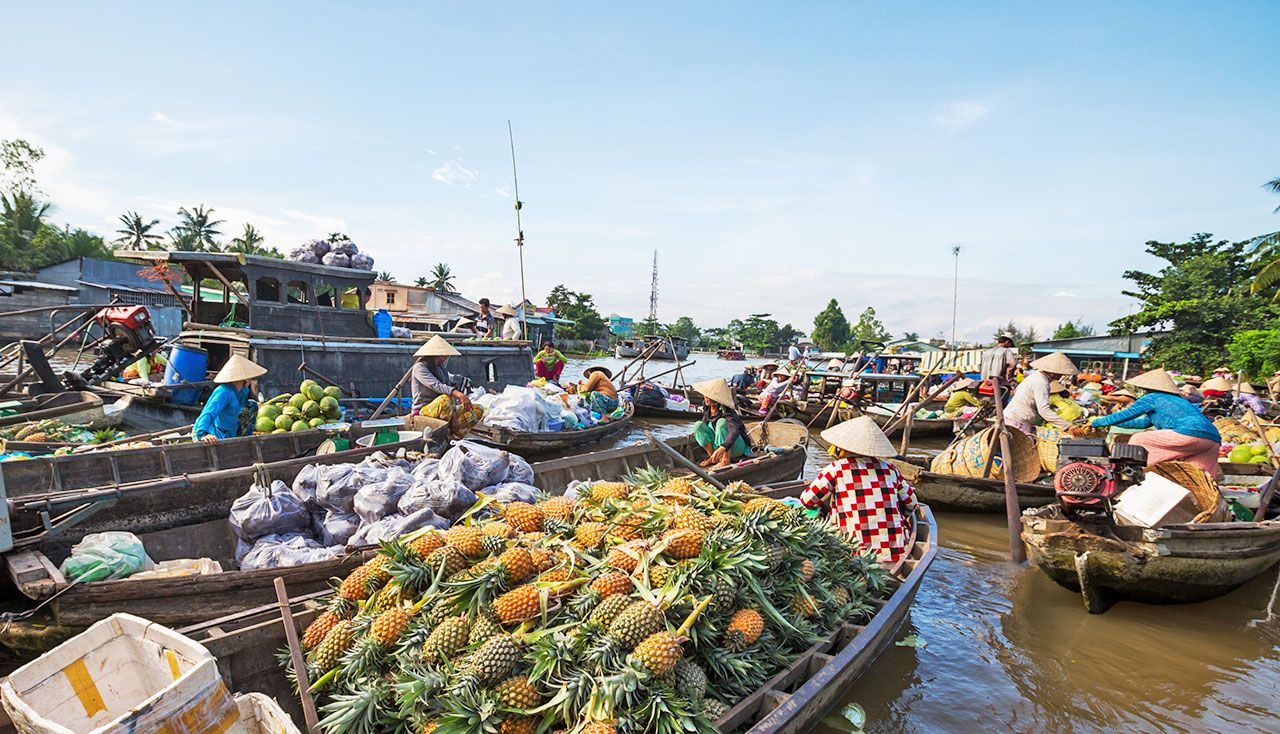 You can enjoy fruits right on the boat. Photo: Thanh Nien Newspaper

According to some documents, the Cai Rang floating market was formed in the early years of the 20th century. There are some interesting explanations about the origin of the name "Cai Rang" (The Teeth). Legend has it that the name was derived from the time this land was reclaimed. At that time, a large crocodile came here and its teeth stuck in this land, leading to the current name. Another explanation in the book "The Voice of the South" by the author Vuong Hong Sen indicates that: the name “Cai Rang” originated from the Khmer word "karan", which means “stove”. In the past, the people living in Xa Ton pagoda (Tri Ton district) specialized in making clay pots and "karan". They brought a huge number of those products on large boats to sell in the Cai Rang floating market today. Over time, people have mispronounced the word “karan” as “Cai Rang”. 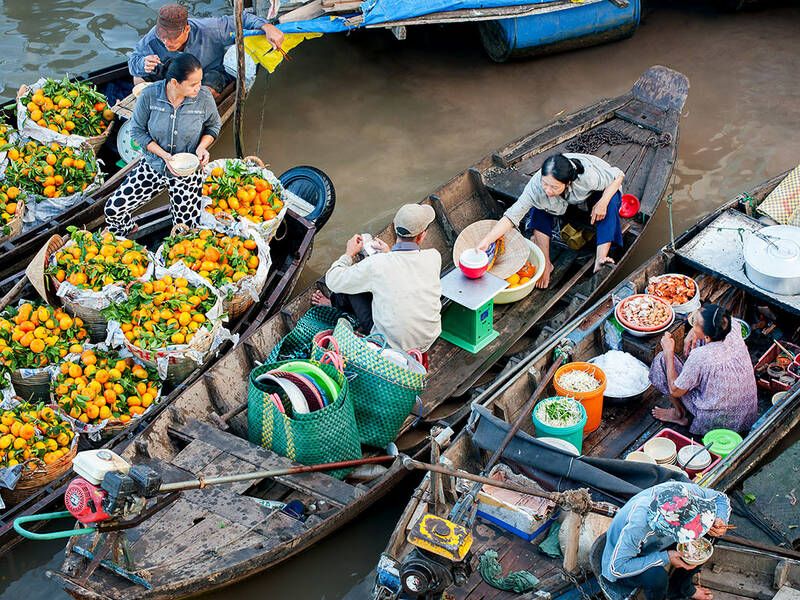 The floating market in the morning. Photo: vietravel.com.vn 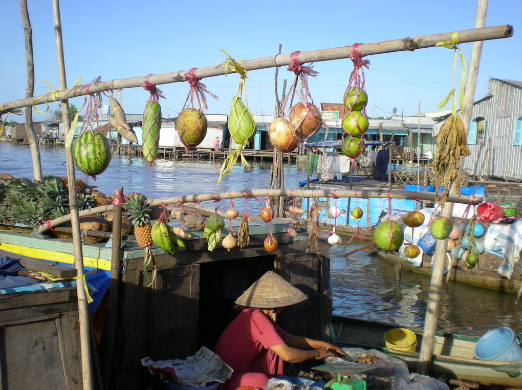 The items are hung on a pole as a form of advertising. Photo: vntrip

Cai Rang floating market usually opens early in the morning with the busiest time being between 6-7am, while at around 8-9am, the market quietens down as there are less customers around this time. Products sold at the market are very diverse, which are mainly agricultural products, fruits, breakfast foods, clothes, daily household goods, etc. The form of advertising products at this floating market is also very unique, as the sellers often utilize a pole and hang their items on it. For example, onions, garlic, and mangos are hung onto a pole on the boat, which is very eye-catching. When coming here, not only can you have an opportunity to admire the colourful space with a bustling atmosphere, but you can also enjoy the specialties of Southwest Vietnam such as: noodle soup, salty plain rice flan, grilled bananas wrapped in sticky rice flour, crab paste vermicelli soup and so on. You will be able to enjoy the food right on the boats floating on the river, which can give you a sense of excitement. 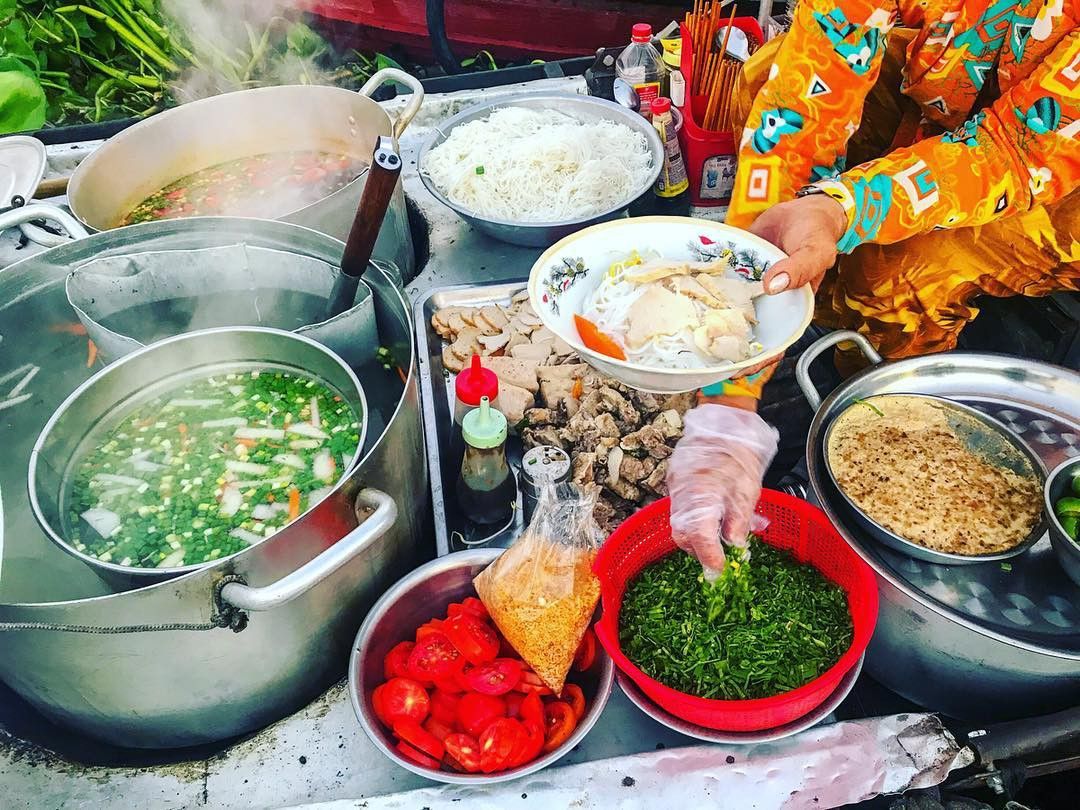 Local people often get to the floating market by canoe, boat or even motorboat. Rowers are “artists” who steer boats among hundreds of other boats without any collision. The people in  Southwest Vietnam are genuine and friendly, so they always help each other to sell products. It is also a cultural feature of the Cai Rang floating market. 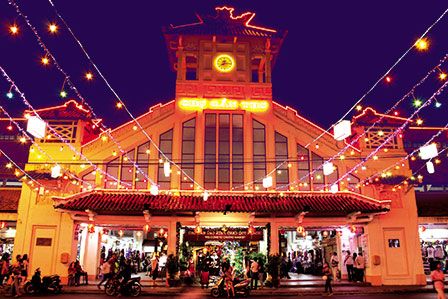 The facade of Tay Do night market. Photo: havicotour

+ Address: 1km from Ninh Kieu wharf, to the west of Hau river

Tay Do Night Market is located in the Can Tho International Expo area. In addition to the name “Tay Do” night market, this place is also known as Can Tho night market, ancient market, Luc Tinh market, or Ham Duong market. In 1915, the market was called “Luc Tinh market”. At this time, it was a bustling trading place of six provinces of Cochinchina during the French colonial period. Later, the market no longer attracted small traders from other provinces, so its scale was narrowed down and then it was called “Ham Duong”. In 2005, as the market deteriorated, it was rebuilt and renamed “Can Tho market”. The local people are still used to calling it “Can Tho ancient market” as it has existed for a long time. As Can Tho is the land of Tay Do, the market is also called “Tay Do night market”. 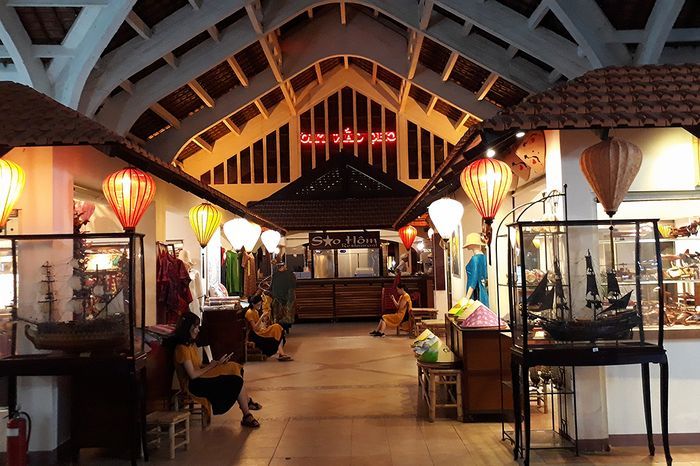 The ceiling is built in the style of herringbone curve. Photo: bazantravel

In terms of architecture, the market is a harmonious combination of ancient and modern features. Ancient features are reflected in the yin-yang roof tiles, while the modern architecture in the ceiling is shown by the style of herringbone curves. The night market often starts at around 4pm and is usually not too crowded due to being very spacious. The stalls are well-arranged to bring the best shopping experience for buyers. There are a wide range of products at Tay Do night market, in which there are hundreds of specialty fruits such as oranges, mangoes, fresh vegetables, etc. At the same time, many typical cakes of Vietnam are sold here, such as cylindrical glutinous rice cake, coconut leaf cake, pancakes, grilled bananas wrapped in sticky rice flour and so on. 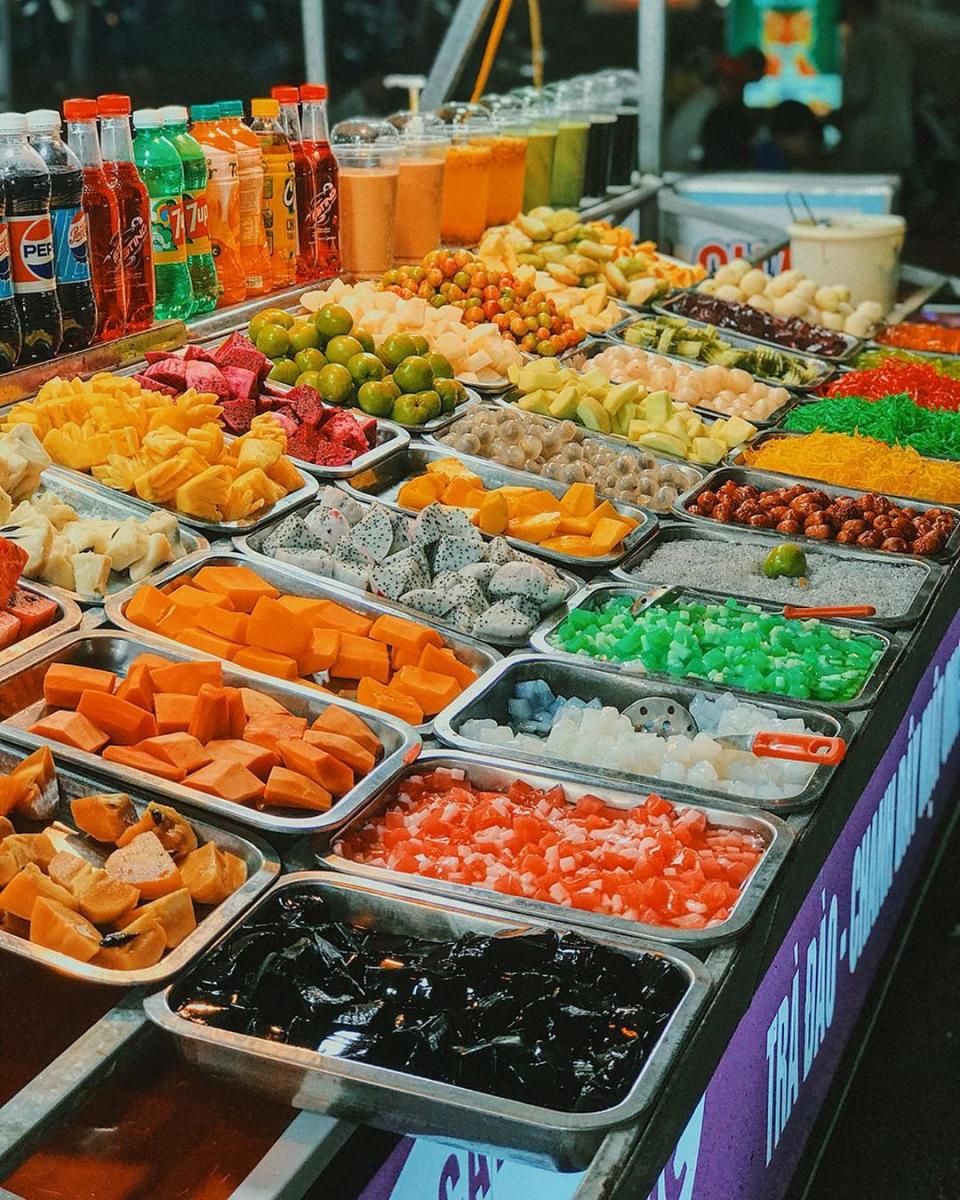 A stall selling fruits in the night market. Photo: ximgo 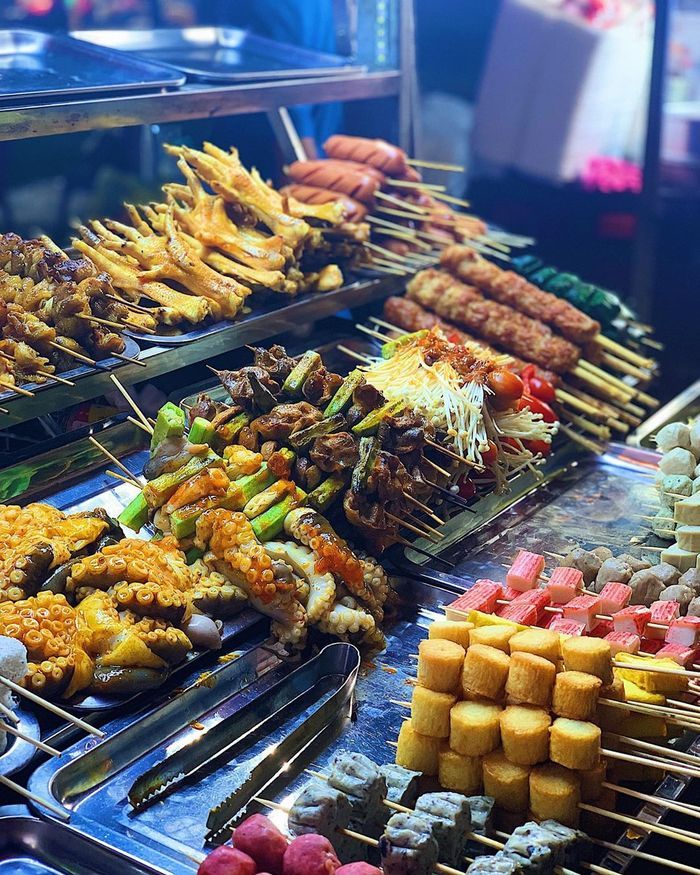 A snack stall with many attractive dishes. Photo: ximgo 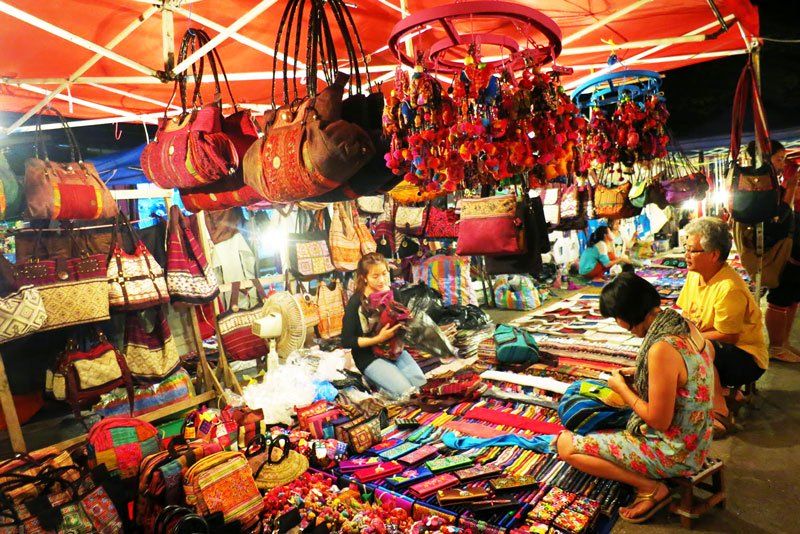 The highlight for the bustling night market is flowers, ranging from marigolds, roses, lilies, to lotuses. In addition to trading purposes, Tay Do night market also has a number of other entertainment activities and games for you to relax. 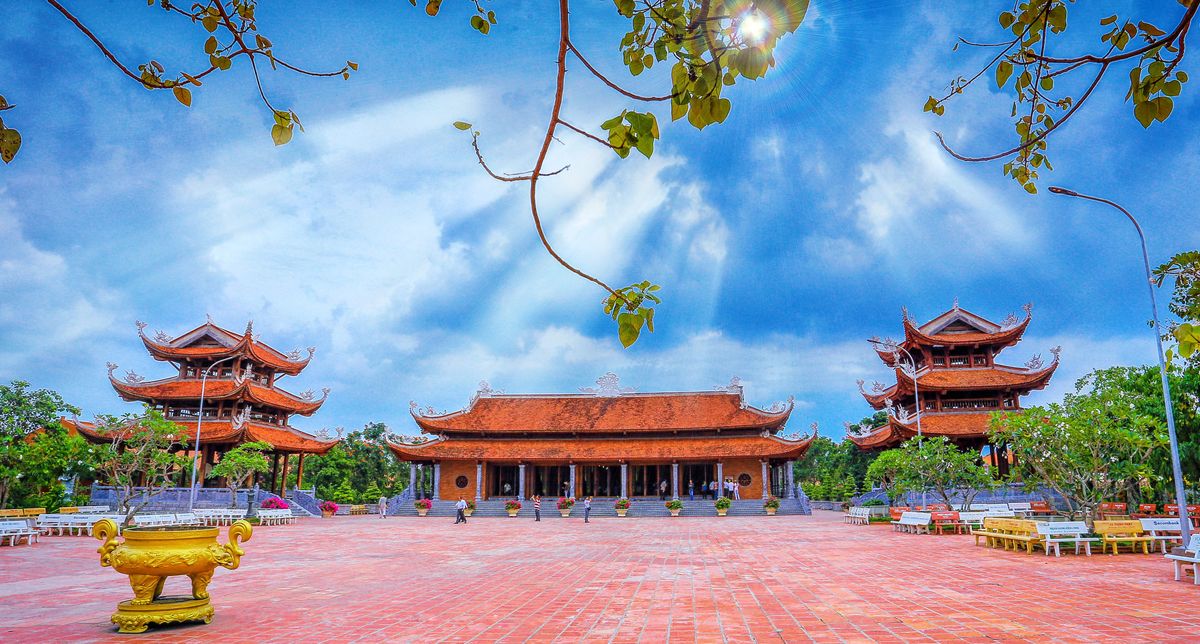 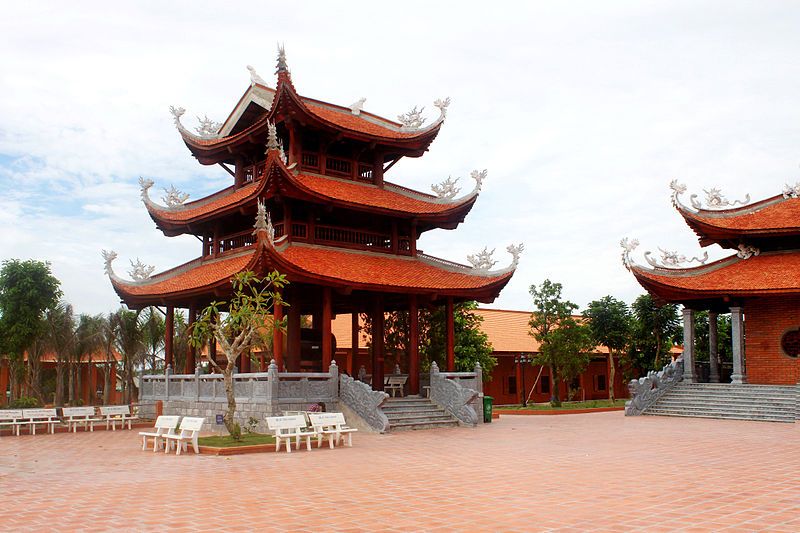 Truc Lam Phuong Nam Zen Monastery is one of the largest Buddhist works in the Southwest region with a total area of up to 38,016 m2. The monastery was built on July 16, 2013 and then completed on May 17, 2014. As it follows the Truc Lam Yen Tu sect, most of the items here are imbued with pure Vietnamese architecture of the Ly - Tran dynasties. This is also a common feature of the architecture of Zen Monasteries in Vietnam. 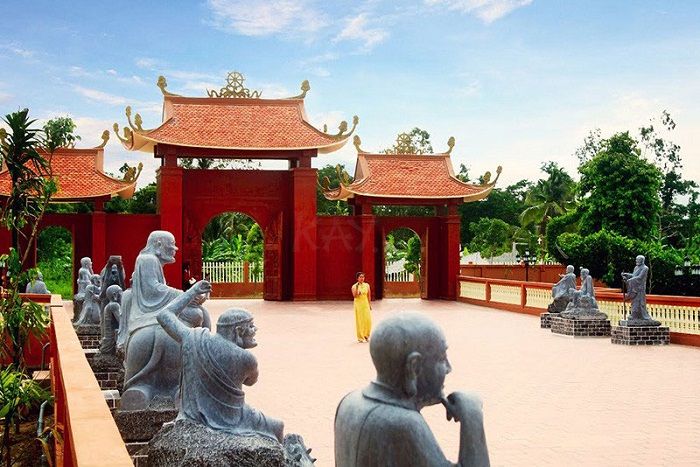 From the Tam Quan Gate to the monastery, there are two rows of statues. Photo: tour.dulichvietnam.com.vn 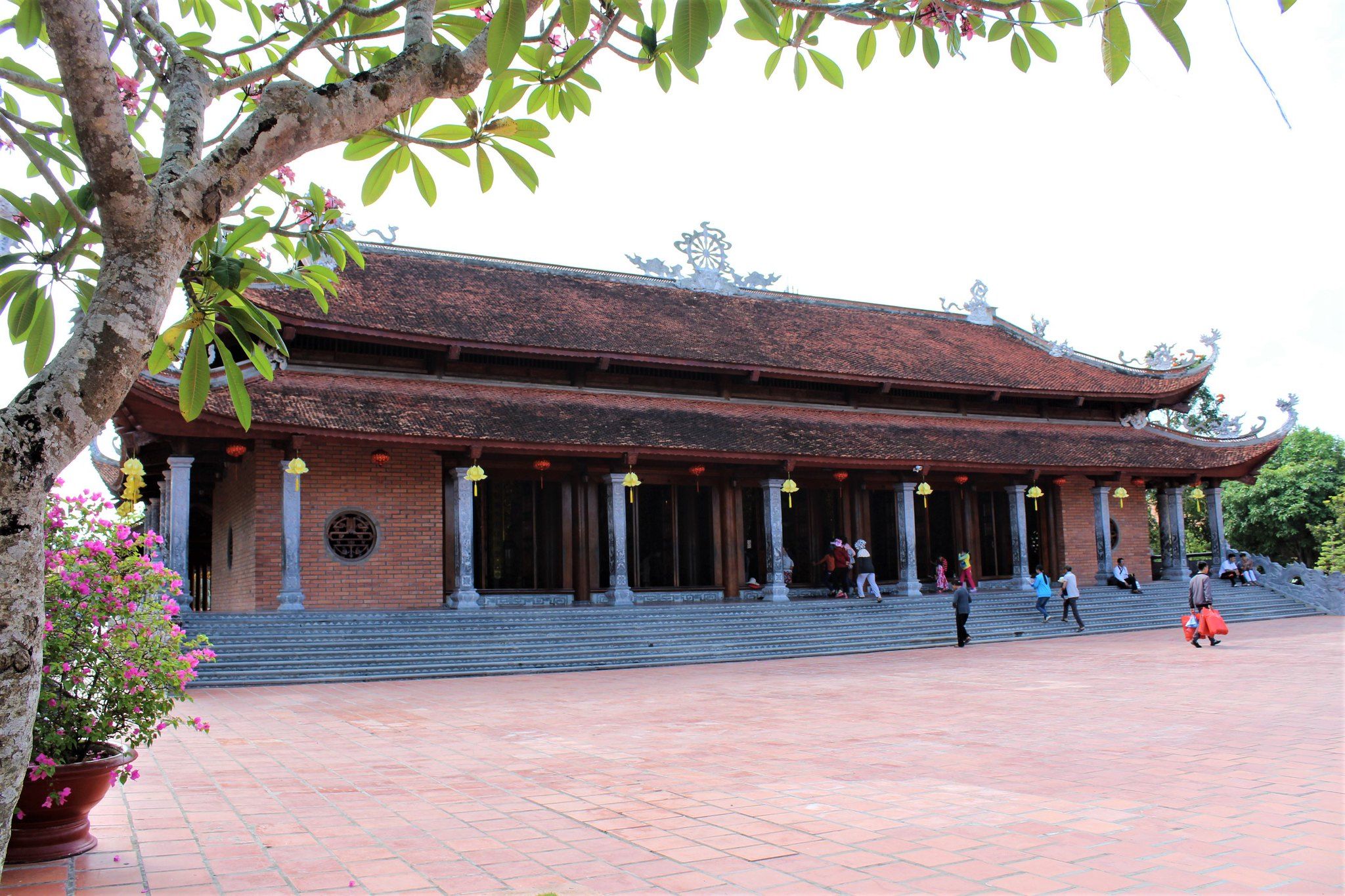 The main hall of the monastery. Photo: thamhiemmekong 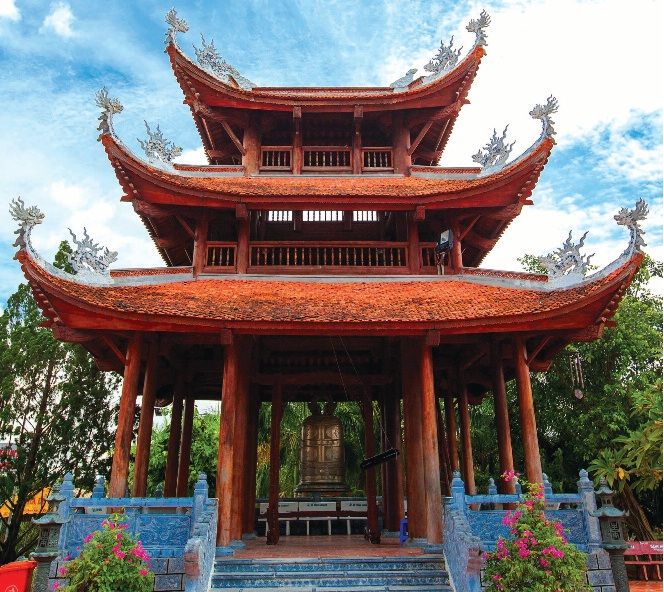 The bell tower of the monastery has a bronze bell weighing 1.5 ton. Photo: thamhiemmekong

Truc Lam Phuong Nam Zen Monastery features red-brown tiles and large wooden pillars. The monastery has large works such as the Tam Quan gate, the main hall, the bell tower, the drum tower, and the back hall. The main hall was roofed with eight-part tiles in the style of the Tran Dynasty, while other works utilized the four-part tiles in the style of the Ly Dynasty. It is noteworthy that they are all made of ironwood imported from South Africa (about 1,000 blocks). 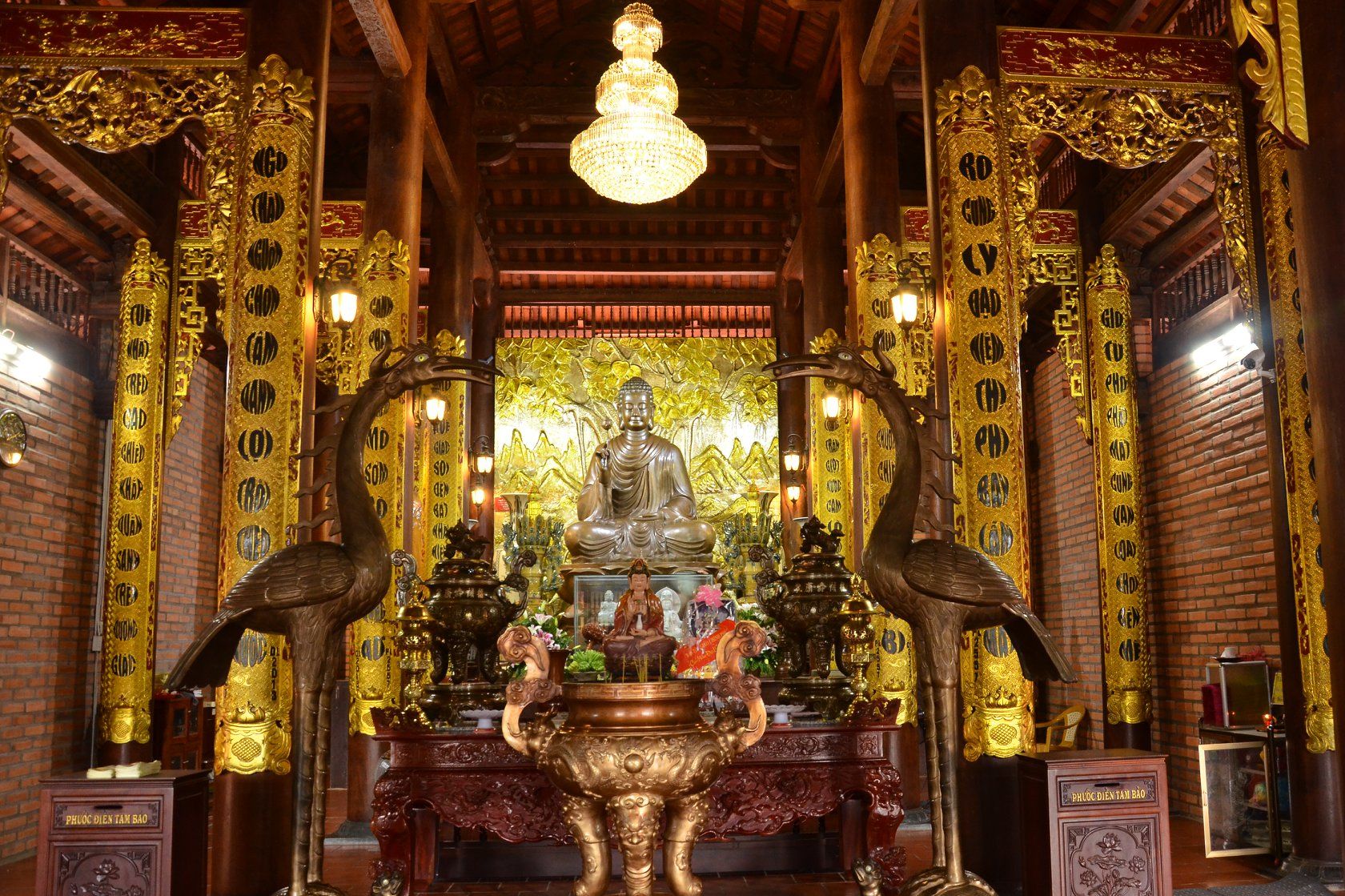 Inside the main hall. Photo: thamhiemmekong

Inside the main hall, there is a 3.5 ton statue in a sitting position and holding a flower branch in his hand. On both sides are statues of Samantabhadra Bodhisattva and Manjushri Bodhisattva. The wooden pillars inside are placed on gray stone planks which are carved with clouds and lotus patterns - typical features of Vietnamese culture. Many horizontal lacquered boards and parallels are meticulously carved to show the talent of wood carvers in Southern Vietnam. 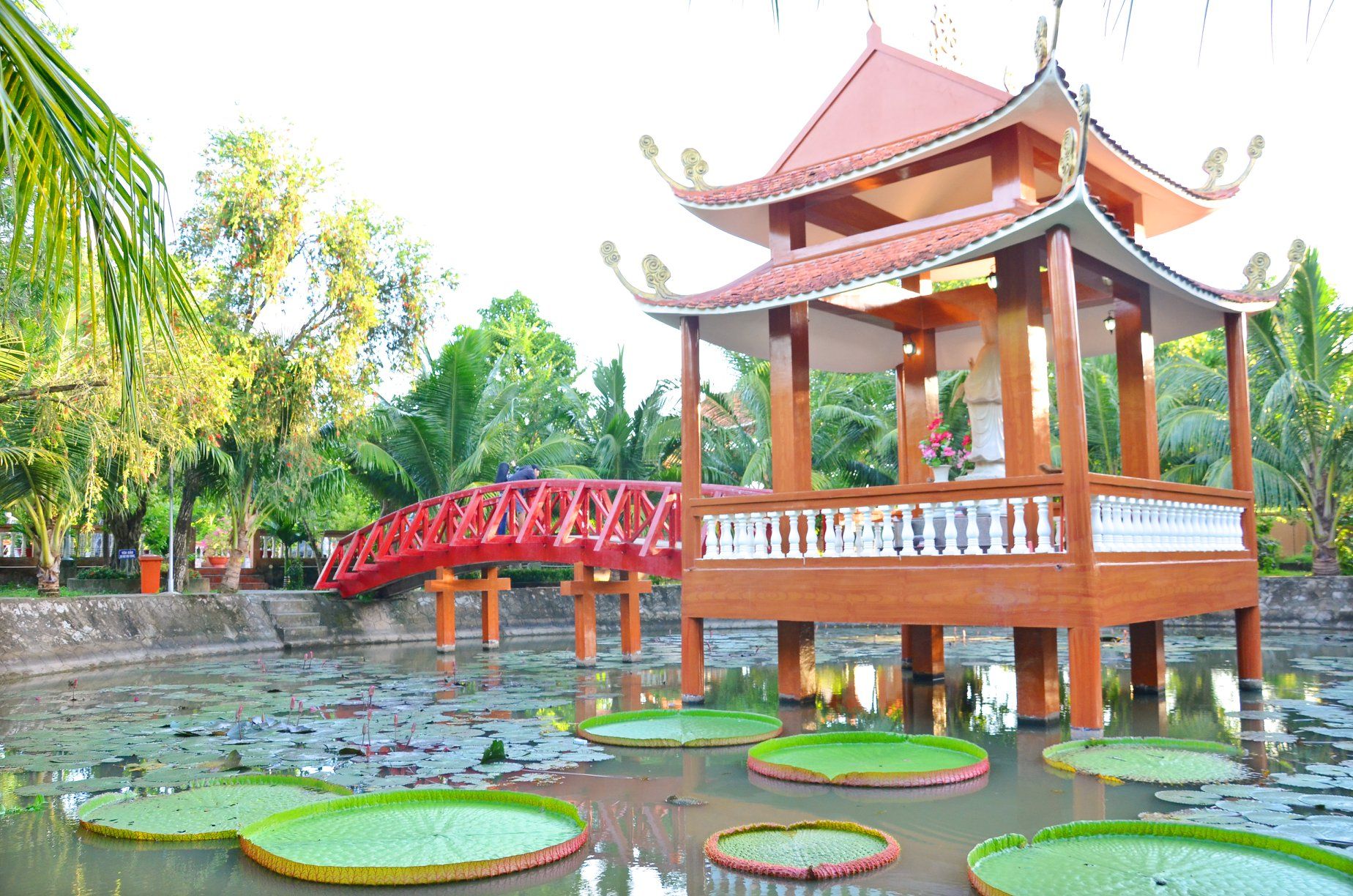 Guanyin Temple was built in the middle of a lake with a wooden bridge simulating The Huc Bridge in Hanoi. Photo: thamhiemmekong

The campus of the monastery also has a number of works such as Guanyin Temple, Maitreya Palace (Thuy Ta), One Pillar Pagoda, lecture hall, guest hall, dining hall, library, and oriental medicine room. These works are well-arranged with green trees to create a peaceful scenery for Buddhists and tourists. 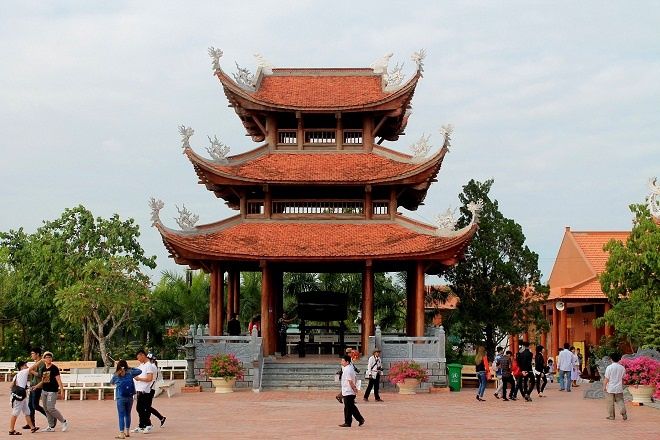 The works in the monastery are well-arranged. Photo: Zings new

+ Address: Thuan An ward, Thot Not district, Can Tho city 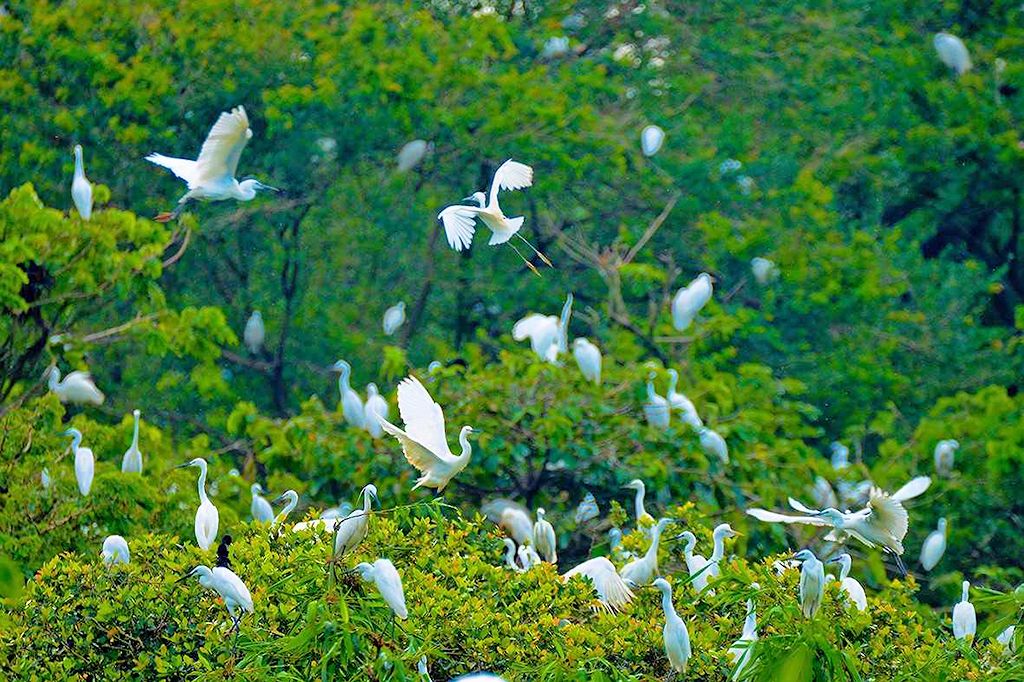 Bang Lang Stork Garden is home to the most birds in Southwest Vietnam. Photo: dulichvietnam

The image of the stork is considered a symbol of the rustic characters of the people in Southwest Vietnam. You can see groups of white storks in many places, but perhaps only in Bang Lang Stork Garden can you admire many different species. Perhaps this is the place with the largest number of birds in Southwest Vietnam with more than 100,000 storks. From August to January, it has up to 300,000 multi-species storks coming to nest, creating a “surprisingly” beautiful picture of nature. Thanks to this ecological diversity, Bang Lang Stork Garden always attracts many visitors. 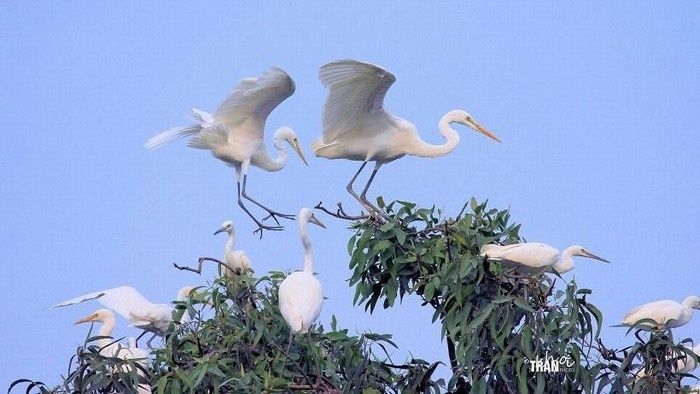 The stork garden is most beautiful at dawn when the sky is slightly foggy. At sunset, when the red sun shines on the garden, the scenery is also gorgeous. At this time, flocks of storks will be flying in the sky like soft strips of silk, which is both romantic and poetic amidst the peace of the countryside. 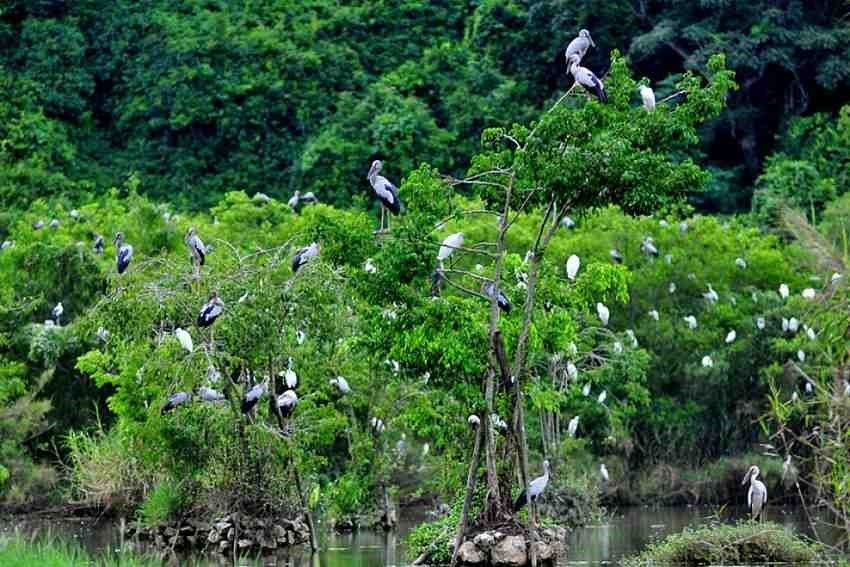 The picturesque scenery of the stork garden. Photo: ohay.tv 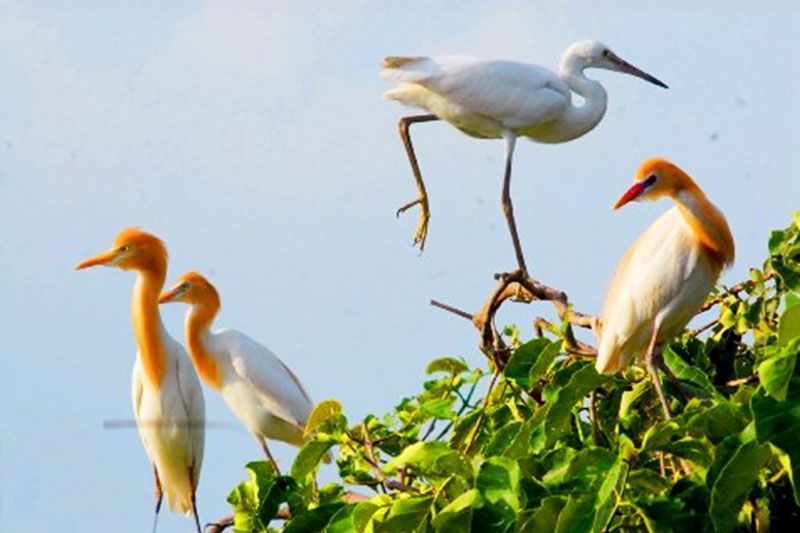 There are up to 300,000 individuals of storks in the nesting season. Photo: dulichdongque.com

Can Tho, in addition to the idyllic beauty of the rivers with the bustling Cai Rang floating market, can also impress you with the works featuring the local cultural characteristics. When visiting this land, you will definitely have unforgettable experiences about the peaceful countryside.