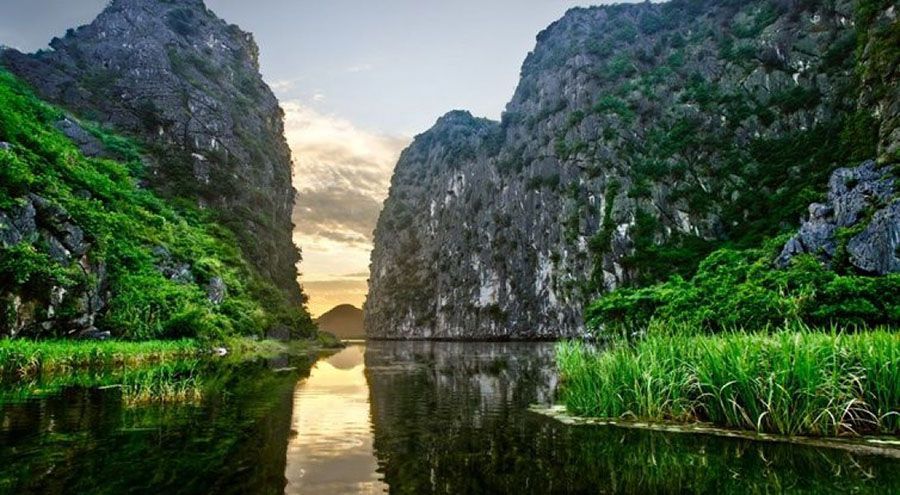 Not only having a long-standing wet rice cultivation and diverse folklore, Ha Nam is also famous for many historical sites and beautiful landscapes. Despite not being as well-known as other tourist destinations in other provinces, Ha Nam still possesses unique places that are nowhere to be found.

Ba Danh pagoda is located in Ngoc mountain, Danh Xa village, Ngoc Son commune, Kim Bang district, which is about 10km from Phu Ly city and on the right bank of the Day River. This place is also known as Bao Son Tu, which worships Lady Danh. Regarding the name of the pagoda, according to the locals, it worships the sacred goddess who takes control of the weather, prevents floods and brings good harvests, so they often call it “Duc Ba pagoda in Danh village” - Ba Danh pagoda for short as it is today. 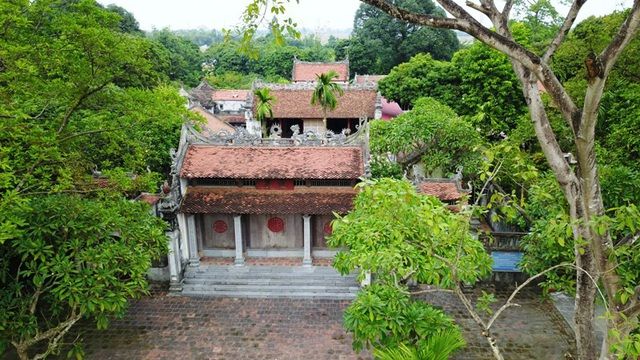 Ba Danh pagoda is in the middle of lush trees. Photo: dantri

The pagoda is in the middle of lush trees, where few people pass by. People who come here in the evening have to light torches and beat gongs/drums to scare away wild animals, that's why there is a folk saying "As empty as Ba Danh pagoda".

Regarding the origin of formation, it is said that in the beginning, the pagoda was just a small temple built of bamboo and leaves on a small mountain with three sides bordering the Day River - whose two banks were dense forests. At that time, it worshiped four gods, namely Phap Van, Phap Vu, Phap Loi, Phap Dien (the goddesses representing clouds, rain, thunder and lightning in Vietnamese beliefs). In the reign of King Le Huy Tong (1675 - 1750), it was rebuilt with a larger scale to be more beautiful. After that, the pagoda was restored many times in the 19th century and has the same architecture as it is today. 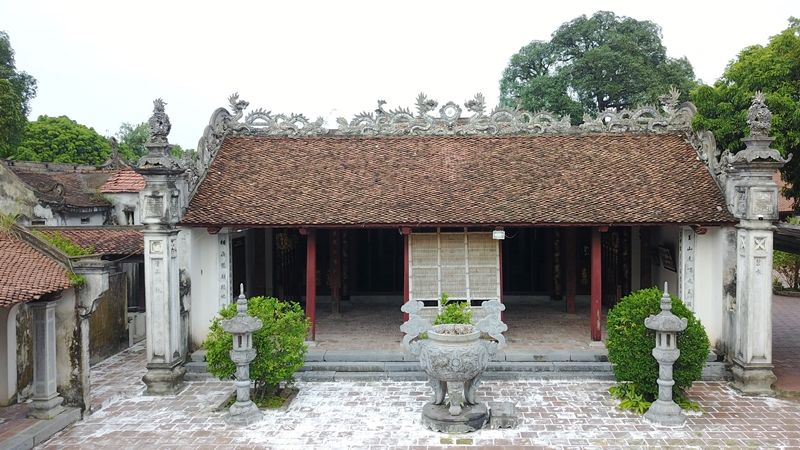 Ba Danh is one of the most beautiful and ancient pagodas in Northern Vietnam in general and in Ha Nam in particular. With an area of about 10 hectares, the pagoda consists of many works with nearly 40 compartments. The layout, architecture, and the carvings of the pagoda are imbued with the traditional construction style of Vietnam. The Tam Quan Gate (Three-door Gate), the corridor, the house of worship and the main hall are all built symmetrically along a main axis in the middle of the pagoda, while the height is gradually raised from the outside to the inside with the last place being the main hall. 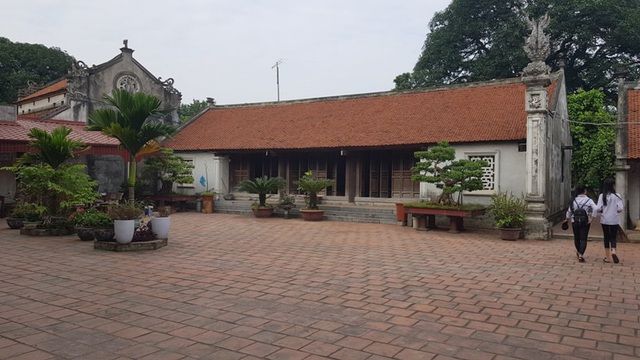 The pagoda consists of many works with nearly 40 compartments. Photo: dantri

The pagoda is surrounded by the charming scenery, and when coming to the temple, you will be able to have a feeling of peace and relaxation. In addition to the ancient look, Ba Danh pagoda is famous for being very sacred. Every year, this place attracts a large number of tourists coming to worship Buddha and sightsee. 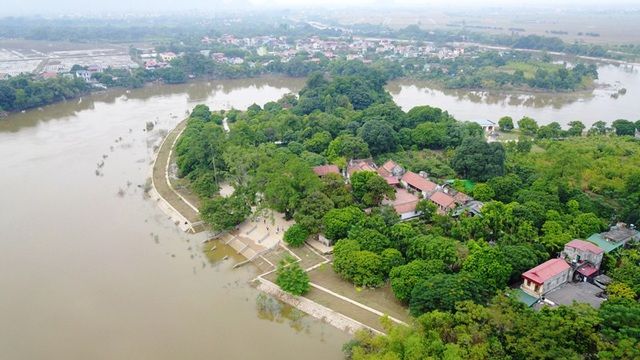 The pagoda is surrounded by charming mountains and rivers. Photo: dantri

The complex of Truc temple - Ngu Dong Thi Son is located in Quyen Son village, Thi Son commune, Kim Bang district, 8km from Phu Ly city - on the banks of the Day River and at the foot of Thi Son Mountain. This scenic area is famous for its charming natural scenery, ranges of mountains and unique cave system. 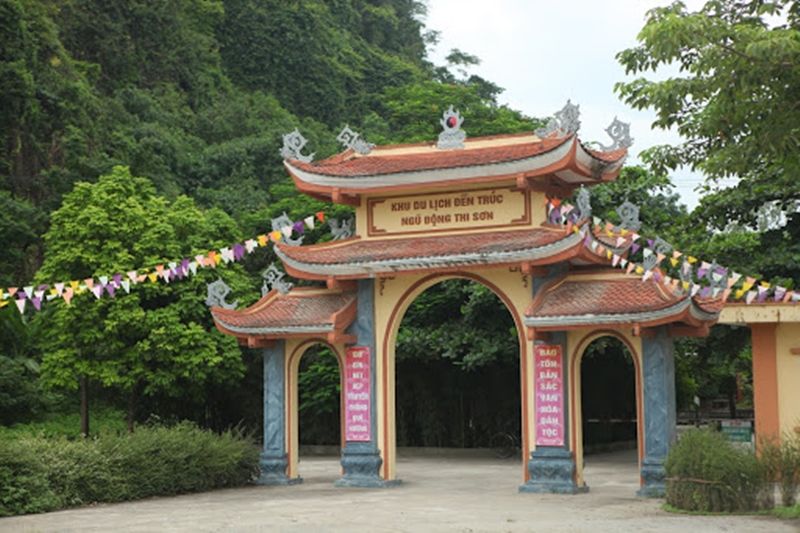 Legend has it that in 1089, Ly Thuong Kiet's fleet on the way to conquer the Southern region, when passing through Quyen Son village, broke its mast. The general stopped the boat and went ashore to carry out a ritual at a nearby temple. That time, Ly Thuong Kiet gained a great victory, then he asked the king to ordain this temple and celebrate this victory with the soldiers and villagers. Ly Thuong Kiet also taught people to grow mulberries, raise silkworms and weave cloth to improve the people's lives. To commemorate his merits, the locals set up a shrine where he celebrated his victory and named it Truc (Bamboo) Temple . The reason for this name is because the temple was built in the middle of a bamboo forest of dozens of acres. Notably, this temple has 32 titles of feudal dynasties. 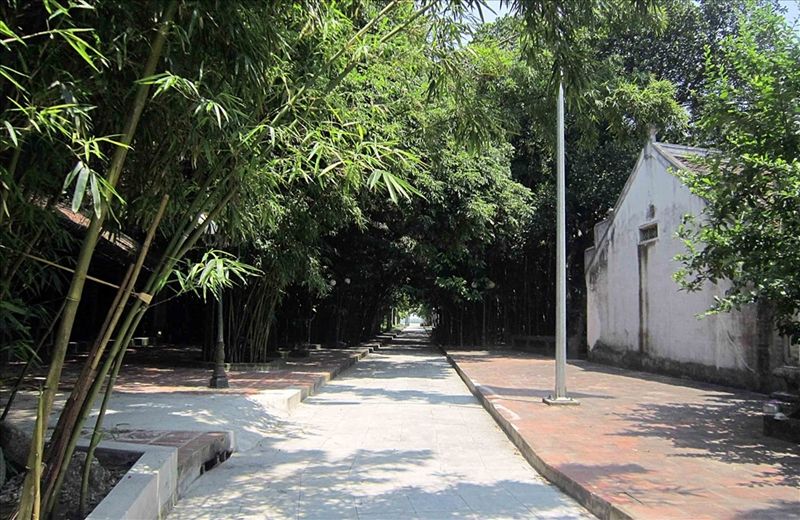 Due to being built in the middle of a bamboo forest, it is called Truc Temple. Photo: mytour.vn

The temple is made of ironwood in the shape of the “Dinh” letter, including the gate, the front hall and the harem. The temple gate consists of four pillars: two main ones are in the middle, while two smaller ones are on either side. Passing through a brick yard with a width of over 10m, you will get to the front hall with a truss system like a copper gong stand, which was popular in the late 19th century. Truc Temple's harem stands out with patterns carved according to the themes of the Four Symbols, the Four Seasons, the shape of a flipped leaf and the radiating clouds, which feature artistic values. The temple is surrounded by a lush bamboo forest in harmony with the ancient tiled roof and mossy walls. 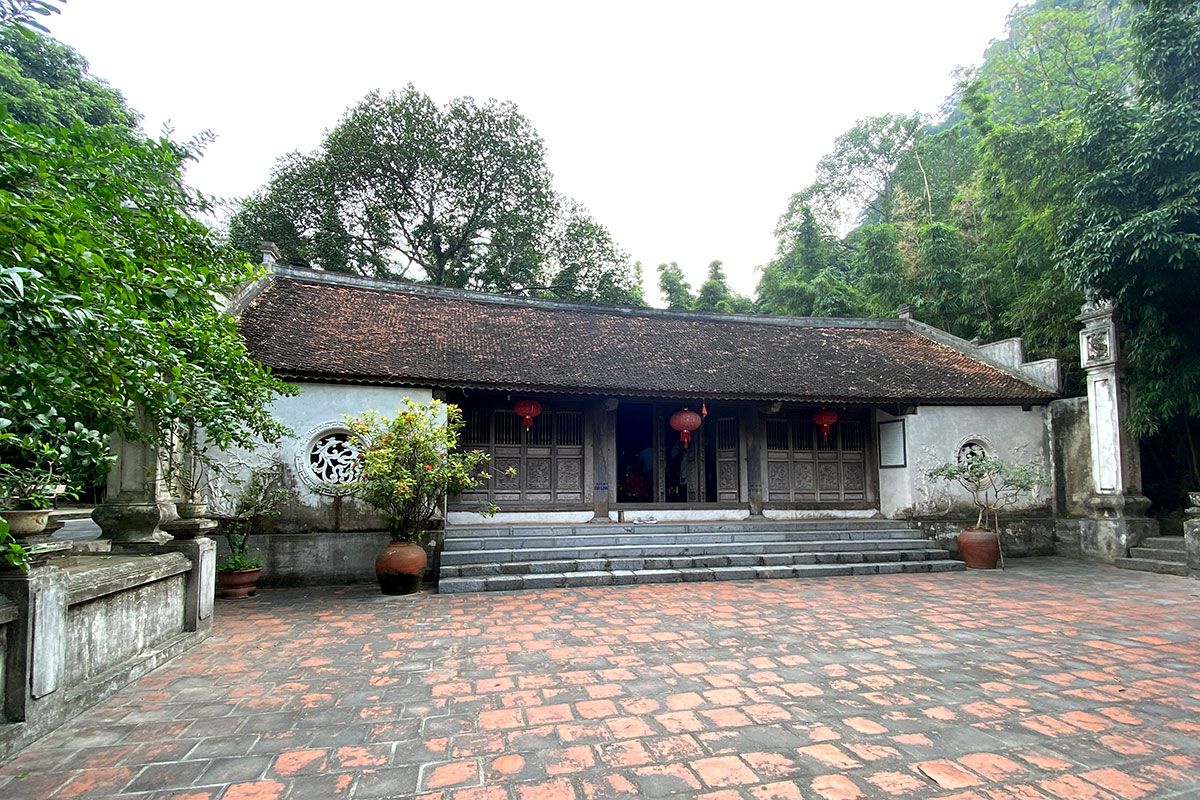 Every year, people organise the Truc Temple Festival to commemorate the merits of Ly Thuong Kiet. The festival takes place from the 1st of January to the 10th of February (of the lunar calendar) with many traditional rituals and attractive folk games, among which the most prominent activity is Dam singing - a type of unique dance and singing that you can only find in Quyen Son village. 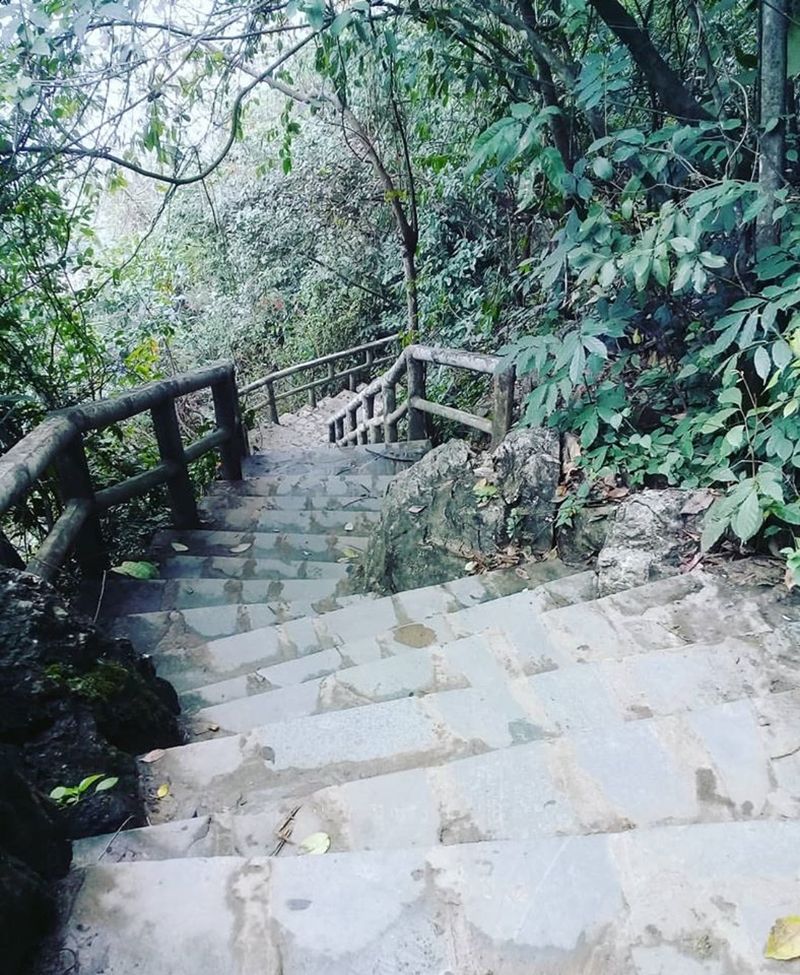 Following the path to the peak of the mountain to visit the Ngu Dong system. Photo: dulichvietnam.vn

Next to Truc temple is Cam mountain, which is also known as Cuon Son mountain. Following the path to the peak of the mountain, you will be able to admire a special natural stone chess board as well as the charming panorama. In the heart of Cam mountain is the Ngu Dong system consisting of five continuous caves with a length of over 100m with diverse structures and stalactites. The entrance to the cave is high as compared to sea level and overlooks the Day River, so the atmosphere in the cave is always cool and pleasant. 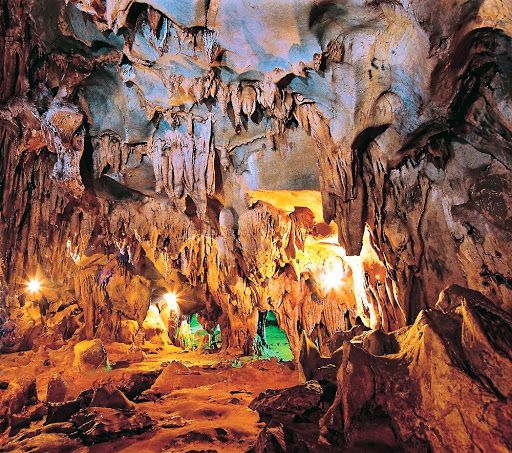 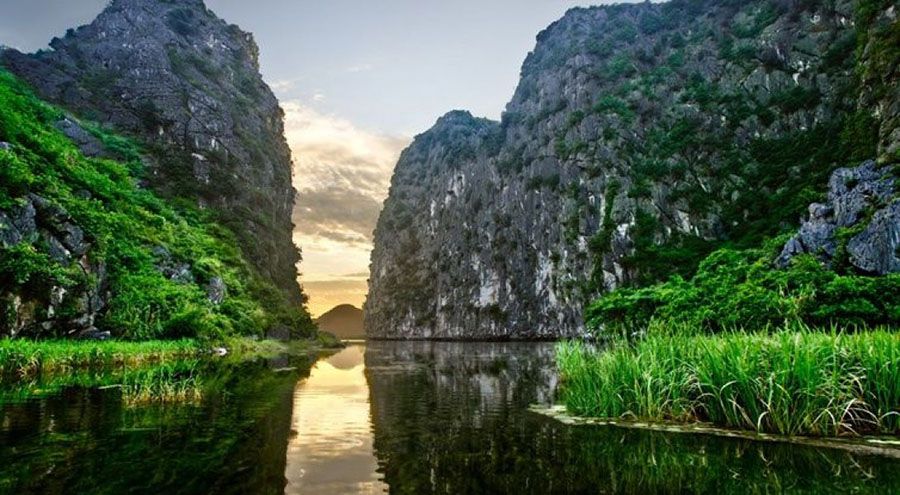 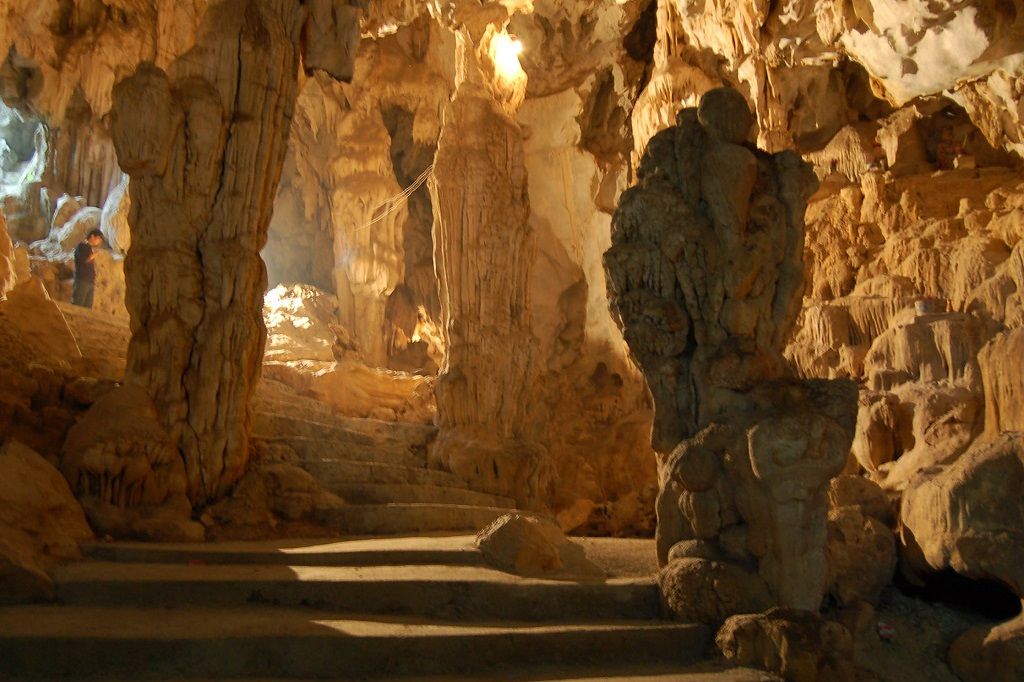 The point that makes Kem Trong attractive to tourists is the impressive cave system. The mountain ranges around Kem Trong have many caves, but the most famous is Dich Long with two caves called “Dark” and “Bright”. When visiting inside, you will be overwhelmed by the large, round, smooth stalagmites rising from the cave floor. In addition, in the cave, there is also a small pagoda worshiping Buddha. In 1821, King Minh Mang visited this place and gave it five  words "Nam Thien De Tam Dong" (the third most beautiful cave in the South). 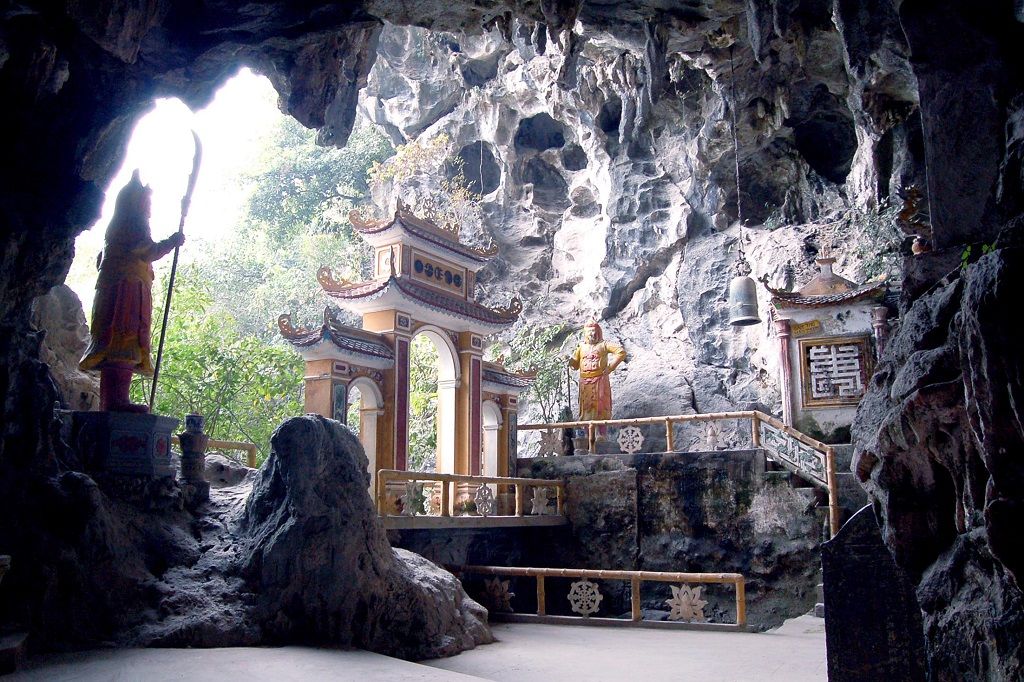 Doi Tam village is located in Doi Son commune, Duy Tien district, which is famous for drum-making and is said to have been formed more than 1,000 years ago. Doi Tam village is also known as the place that made the largest drum in Vietnam with a diameter of 2.35m and a height of 3m for the 1,000-year celebration of Thang Long - Hanoi. It is now placed in the Temple of Literature. 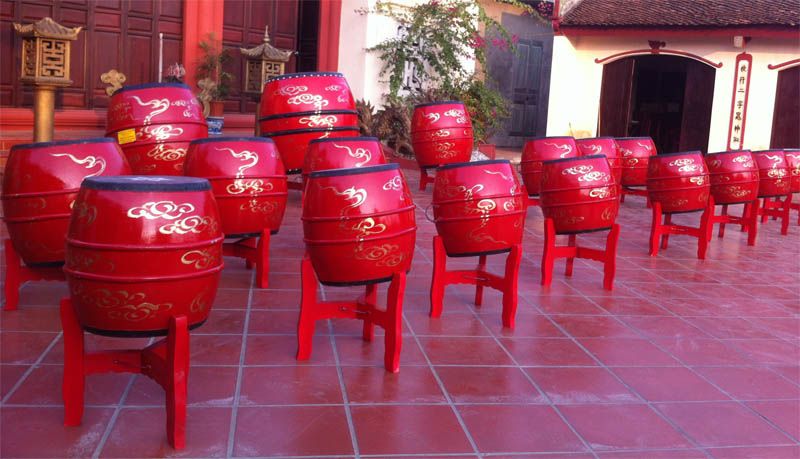 It is not by chance that the Doi Tam drum is chosen to be used in many important festivals and events of Vietnam. When making drums, all steps - from simple to complicated ones, from material selection to finishing - are carefully performed by the craftsmen of Doi Tam. The raw materials to make Doi Tam drums are buffalo skin and jackfruit wood. The skin  must be from old buffalos to be tough, then cleaned, stretched, dried, and cut into the surface of drums. Jackfruit wood must be dry, then cut, divided into small pieces and glued together tightly. Doi Tam drum products have their own vocal range, and Cai/Hoi drums are always more powerful and resonant than those from other places. 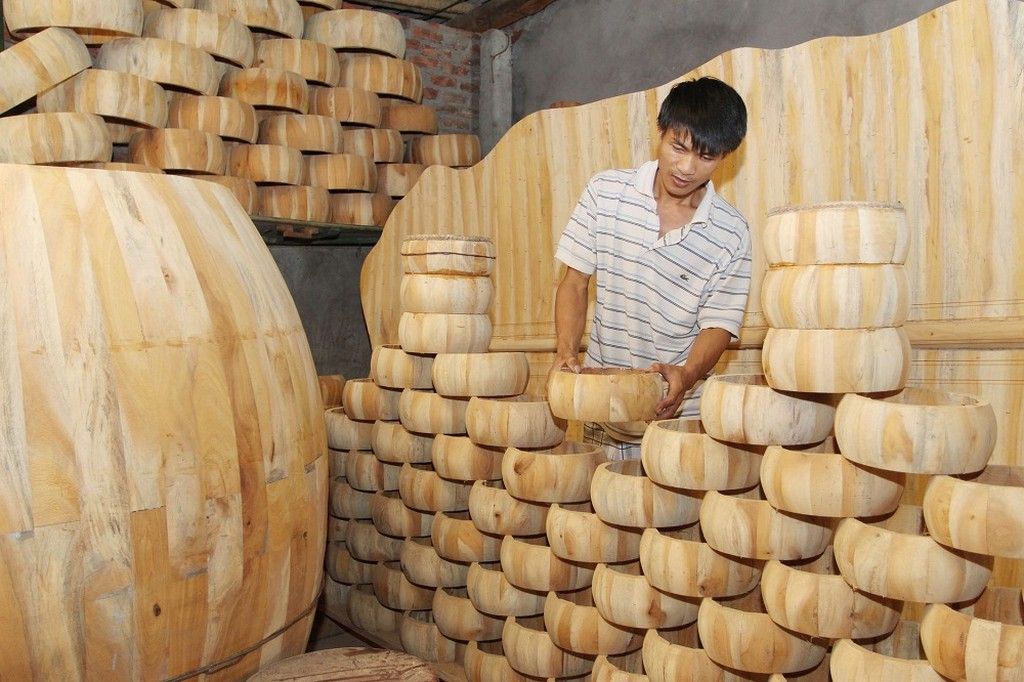 The Doi Tam drum is made from buffalo skin and jackfruit wood. Photo: dulichhanam.vn 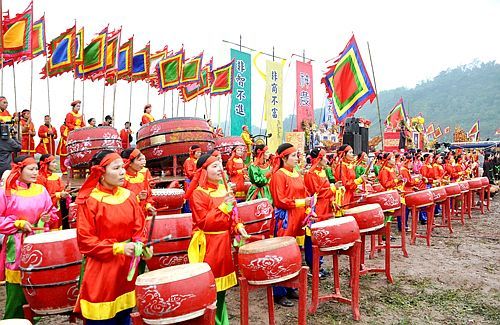 When coming to Ha Nam, you should definitely not miss Ba Danh pagoda, Kem Trong relic, Doi Tam drum village or the complex of Truc Temple - Ngu Dong Thi Son. These unique tourist destinations will surely leave you with memorable experiences in your journey to discover Ha Nam land.