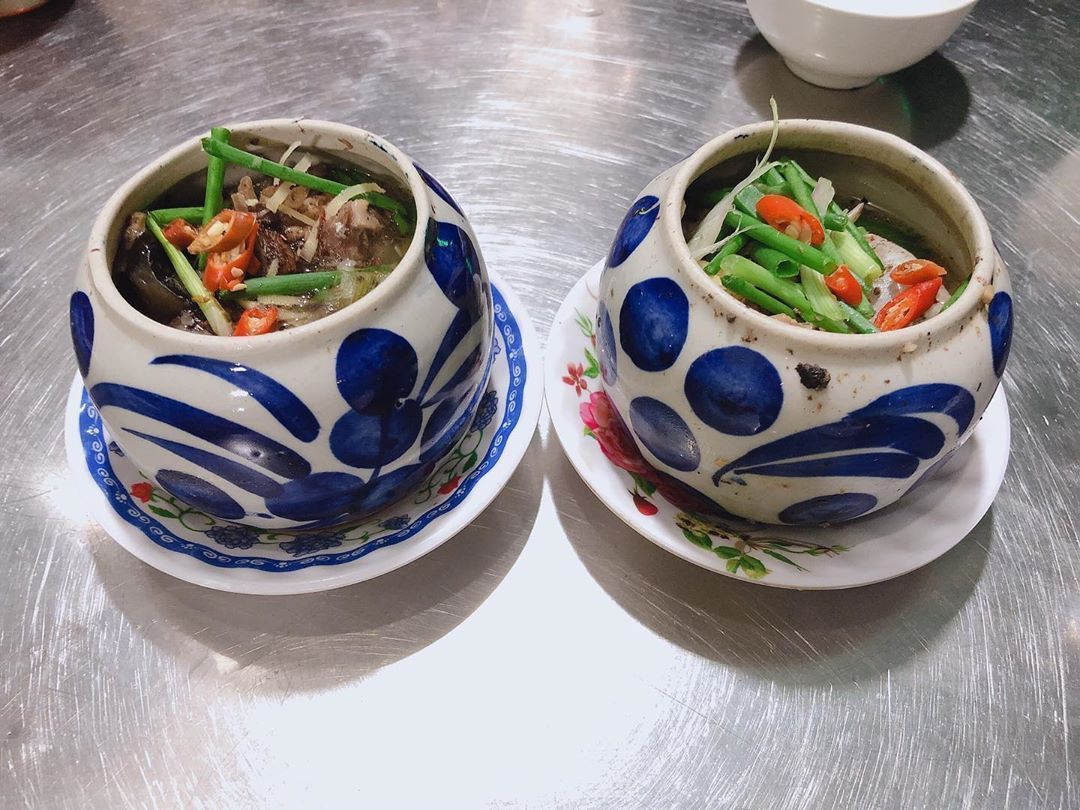 In addition to the beautiful landscapes, Phu Yen is also famous for its unique cuisine. Here are five specialties of Phu Yen that you should try once when coming to this land. 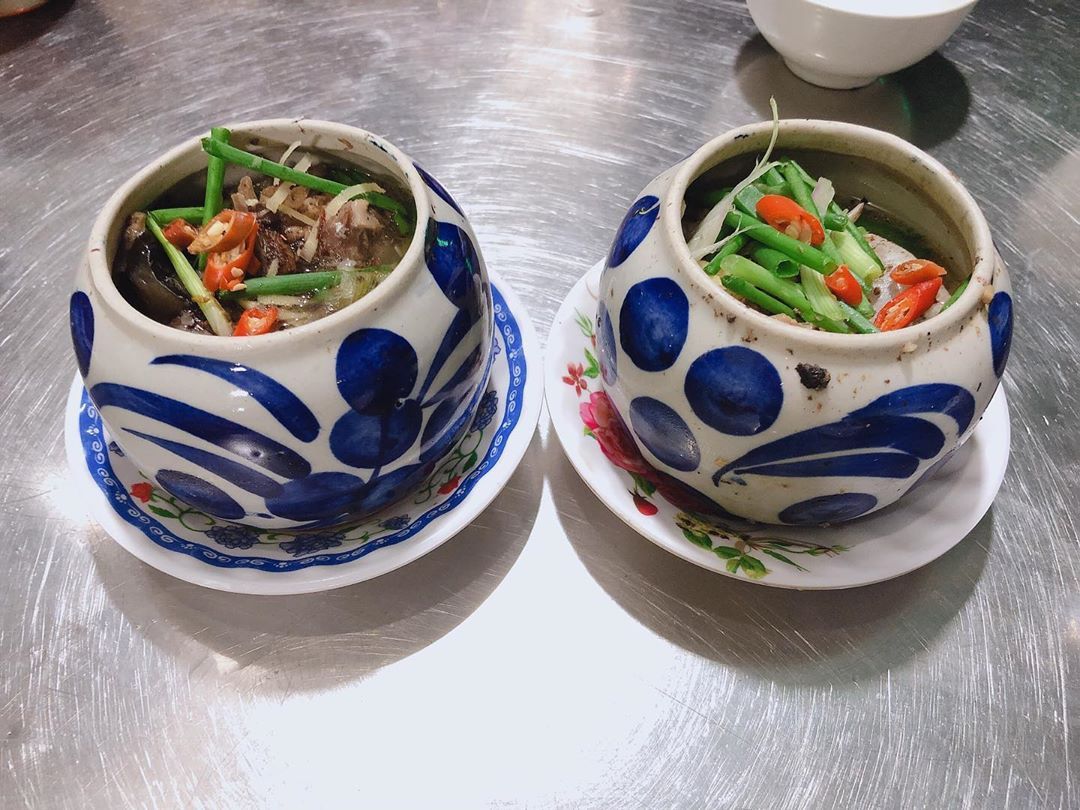 Nutritious tuna eyes are favoured by many tourists on their Phu Yen journey. Photo: @nthn_1108

The dish made from sea tuna eyes is considered a unique specialty in Phu Yen, which has made many visitors curious. While the Japanese cook tuna eyes with soy sauce, sugar and sake, Koreans like to eat raw tuna eyes, but in Phu Yen, there is a famous dish of tuna eyes with traditional Chinese herbs.

The tuna eyes after being cleaned will be marinated with spices and herbs such as jujube, goji berries, vegetables, shallots, garlic and hot chili. Next, put all of these ingredients into a porcelain bowl and heat it on the fire until the dish is well-cooked. Finally, add some spring onion and red hot chili to enhance the flavour and create an eye-catching colour. 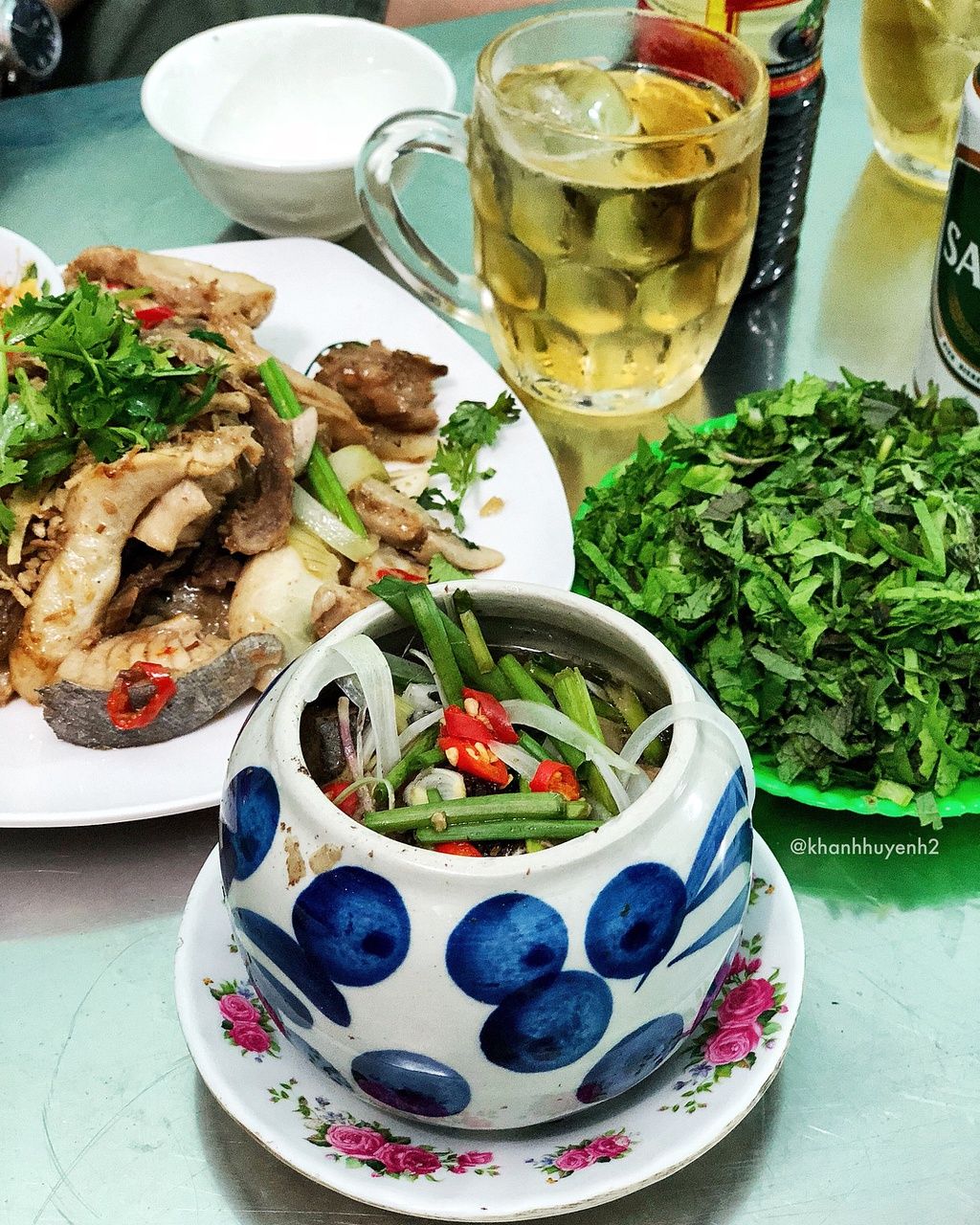 Tuna eyes are cooked in a porcelain bowl with aromatic herbs. Photo: Zingnews

The greasy taste of tuna eyes mixed with the aroma of traditional Chinese herbs and spiciness of hot chili will definitely leave you a strong impression from the first taste. 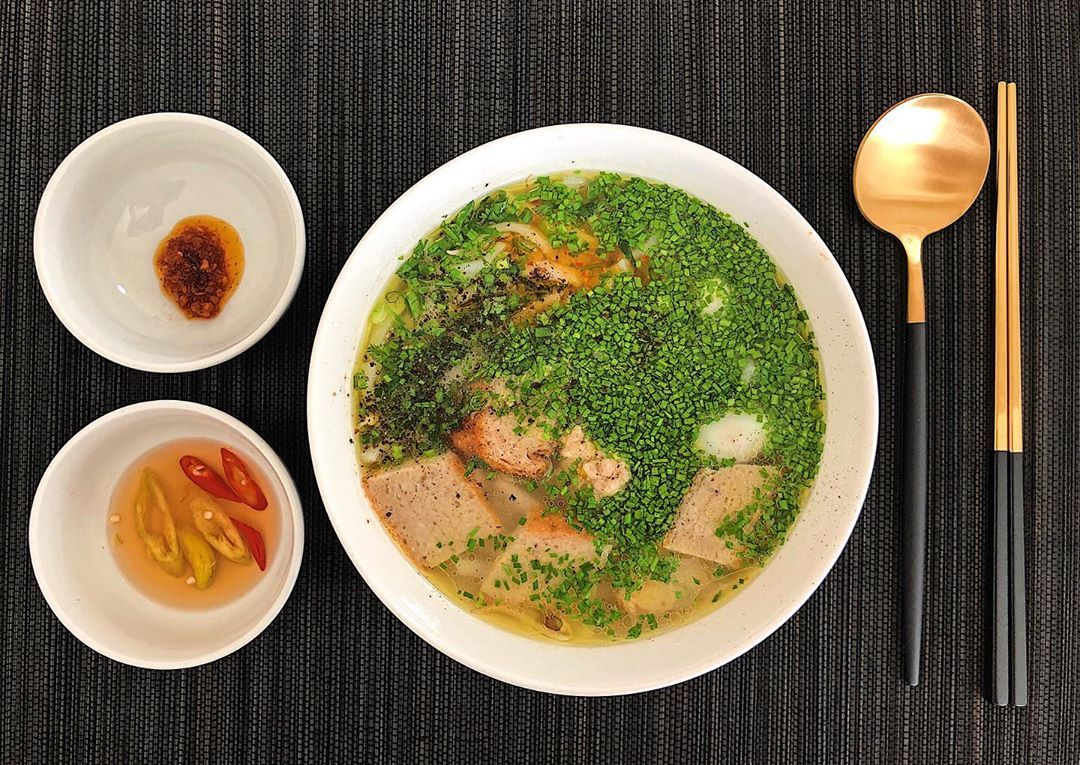 Chive noodle soup is an impressive specialty of Phu Yen. While Hue has a kind of noodle soup made from snakehead fish and Binh Dinh is famous for the dish with grilled fish, the noodle soup in Phu Yen has a lot of chives to increase the strong aroma as well as create an eye-catching colour.

The dish in Phu Yen is made from simple ingredients such as grilled chopped fish, pork, quail eggs and noodles. The noodle here (called “banh canh”) is made entirely from rice flour with softer and chewier fibers as compared to other common types of noodles. The grilled chopped fish is made from sea fish, whose meat is pounded and pelleted into small pieces, then steamed and deep-fried until having a golden brown colour before being put into a bowl of chive noodle soup. 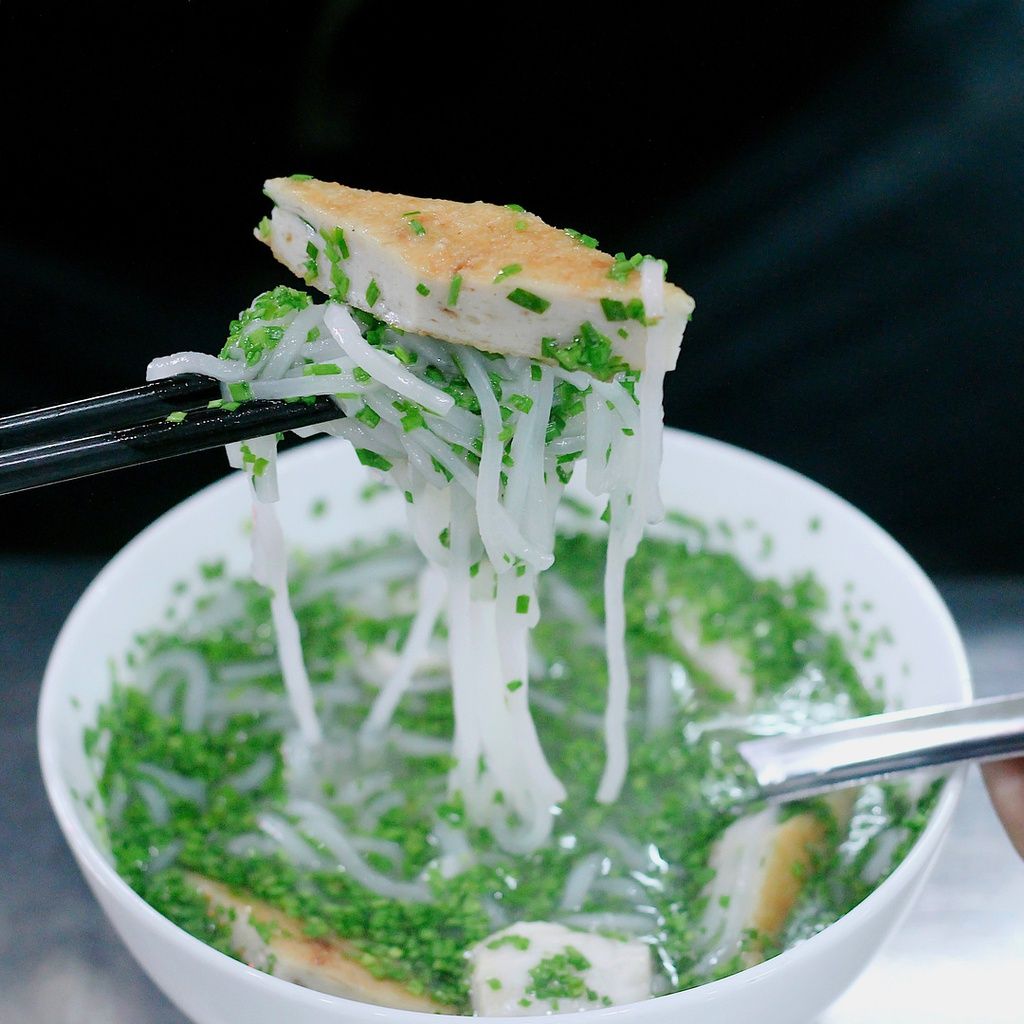 The dish uses chives rather than spring onion to increase its characteristic strong aroma. Photo: zingnews

The broth of the dish is made from small fish such as lizard-fish, barracuda or sailfish to create a natural light sweetness. When seeing the dish, you will first be impressed with the green chives all over the bowl. This kind of noodle soup is a harmonious combination of chewy noodles, a few quail eggs, a lot of chopped chives andrich broth, bringing a light sweetness and a very characteristic aroma. On cold winter days, enjoying a delicious bowl of chive noodle soup will be a great experience. Despite its simple and rustic features, this delicious specialty of Phu Yen has stolen the hearts of many diners. 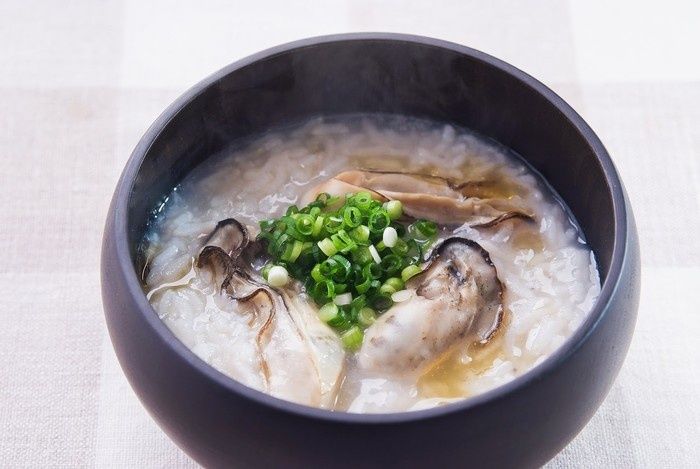 The oysters raised and caught in O Loan lagoon are the main ingredient which contributes to the unique delicious and nutritious porridge of Phu Yen.

The best time to enjoy the dish is from late spring to early summer when oysters are usually fat and succulent. After being caught, the oysters will be washed, gutted and marinated with some spices before being stir-fried with shallots and put into the porridge pot. In O Loan, people often choose to soak red rice with sticky rice before stewing them. Each grain of rice is like flowers blooming, which is very attractive. 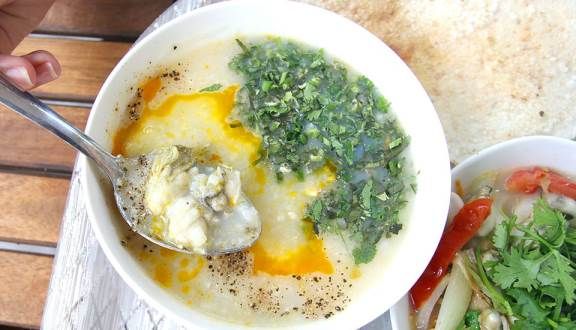 Oyster porridge is scooped into a bowl, then sprinkled with some pepper, coriander, spring onion and sawleaf to create an attractive aroma that stimulates your appetite. Without seasoning or monosodium glutamate, the porridge is still sweet and has a strong seafood flavour. It is important to note that the oyster porridge in O Loan is served with crispy grilled rice paper, creating a unique attraction for the cuisine of this region. The fresh and greasy oyster meat mixed with the fragrant porridge can easily win your heart from the first taste.

Coming to Phu Yen without tasting chicken rice would be a pity. Whether you have had the opportunity to enjoy this dish in Hoi An, Saigon or in any other provinces, Phu Yen chicken rice has its own unique features. 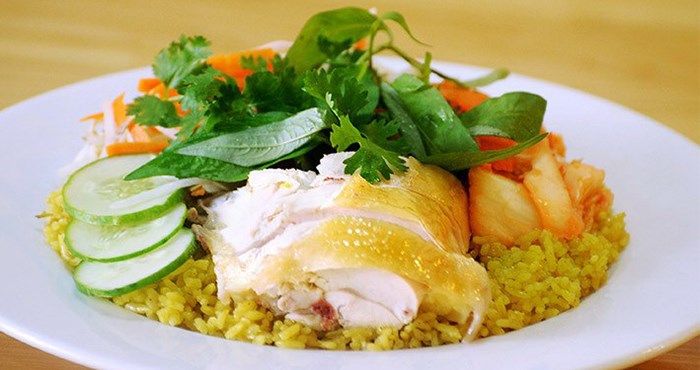 The pieces of chicken are shiny, sweet and attractive. Photo: Phuocnguyetseafood.com

Cooked with chicken broth and some turmeric powder to create an eye-catching yellow colour, Phu Yen chicken rice leaves diners a strong impression as the rice is both soft and fragrant. At the same time, the chicken used for the dish is usually free-range poultry, so the meat is sweet and chewy while its skin is yellow and crispy.

Pieces of chicken (which may be shredded) are served with rice, broth, Vietnamese coriander and pickles, creating a harmonious flavour between fatty chicken and fragrant sticky rice. In addition, the meticulousness in making the sweet and sour sauce with some hot chilli contributes to enhancing the taste of this dish.

Spring rolls made from salamander meat 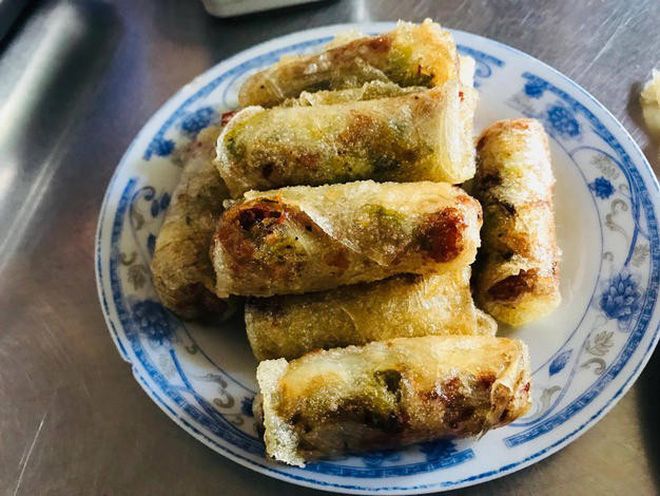 Spring rolls made from salamander meat look like common types of spring rolls, but the taste is completely different. Photo: Facebook

The salamander is a reptile that lives in the natural sandy soil along the coast of the provinces along the Central Coast, including Phu Yen. Salamanders are often processed into many dishes such as salad, porridge or grilled dishes, but the most delicious one is still spring roll. It is the ingredient and unique flavour that makes this dish special.

After being cleaned and minced, the salamander meat will be marinated with spices such as paprika, shallots, pepper, garlic, lemongrass, lard or cooking oil, and then all of the ingredients are mixed well. To add more flavour to the dish, the locals often use some chopped mushrooms and herbs. Next, put this mixture into a thin piece of rice paper to roll it up and then deep-fry until the roll is well-cooked with a golden colour. 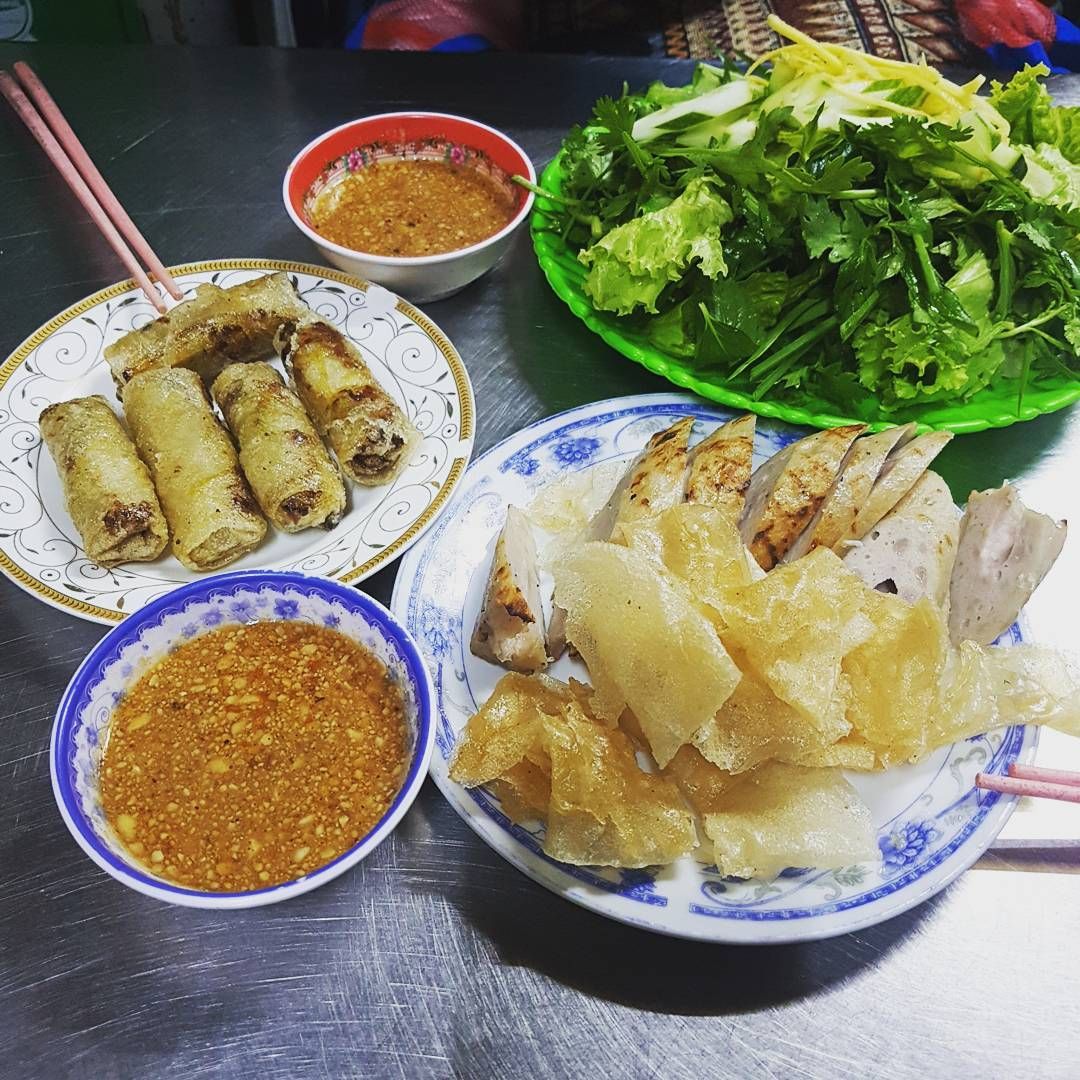 The unique spring rolls made from salamanders. Photo: @canhbuomxinhdep

The spring rolls are more delicious when served with raw vegetables, pickles and sweet and sour dipping sauce. The aroma and sweetness of the salamander meat blend with the harmonious taste of the dipping sauce to create a unique flavour on the tip of your tongue. Some raw vegetables such as lettuce, coriander or sawleaf will add more freshness for the dish.

Phu Yen is an idyllic province, but the dishes here are unique and impressive with a reasonable price, so it is always attractive to a lot of domestic and foreign tourists.