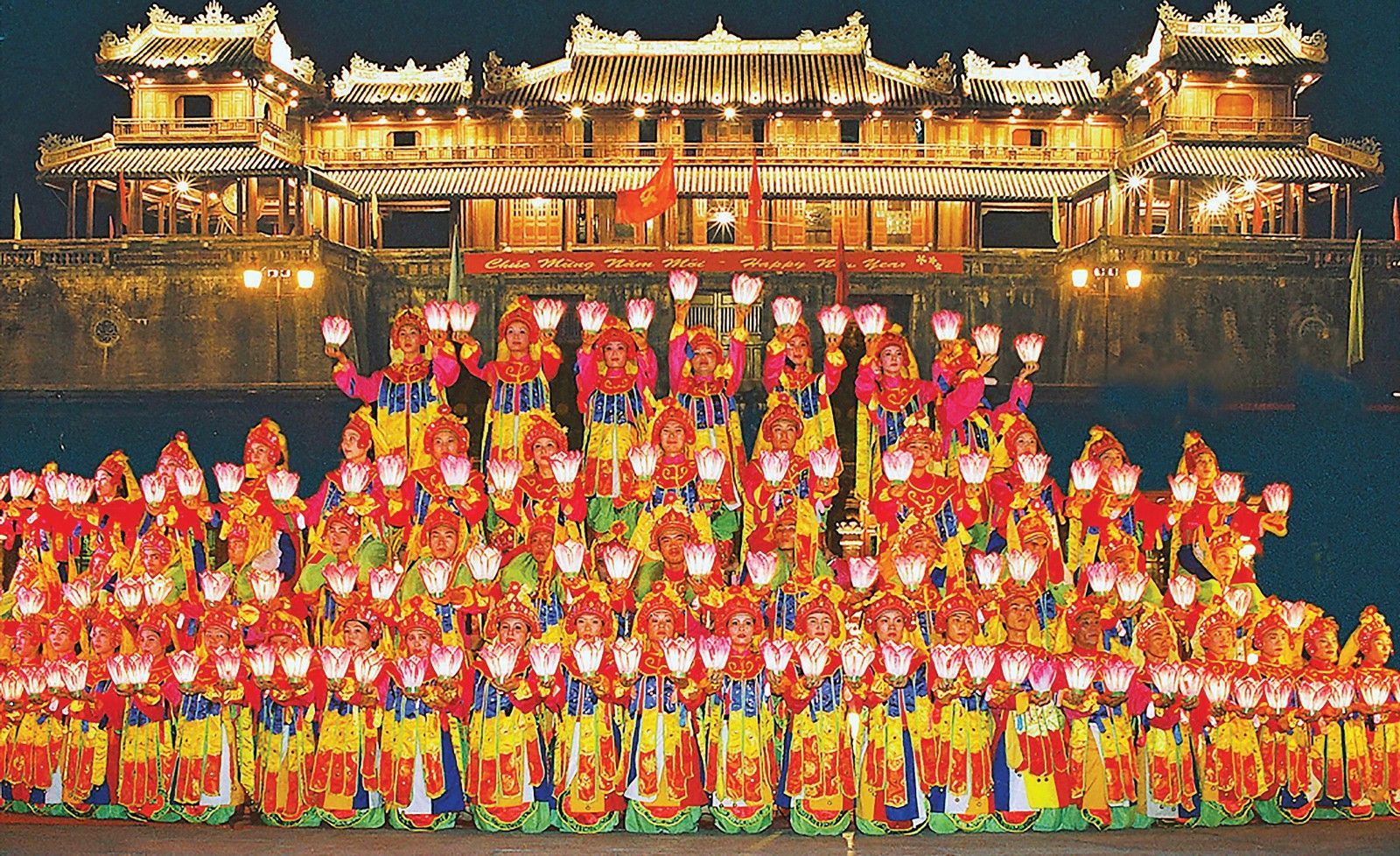 Royal court music (“Nha Nhac” in Vietnamese) is a kind of “scholarly music” to create solemnity for rites and ceremonies in the royal court. This type of music was popular during the Nguyen Dynasty and became a very typical cultural feature of Vietnam in general and of Hue in particular. 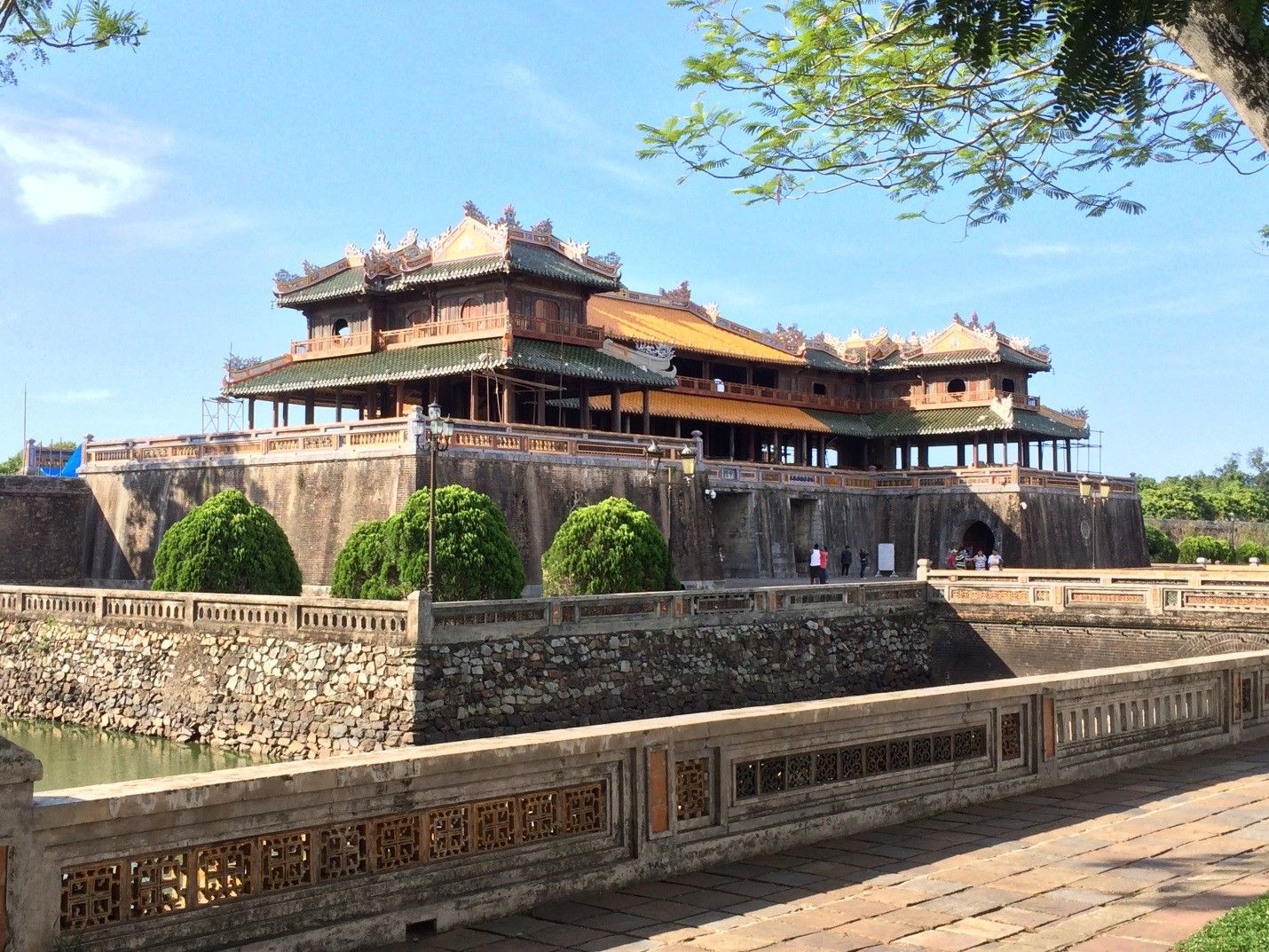 “Nha Nhac” - an alternative name for court music - is an orthodox form of music as well as national music only used in court ceremonies such as Te Giao, Te Mieu, Dai Trieu or Thuong Trieu. The Vietnamese monarchies always appreciated this kind of music and tried to develop it, making Nha Nhac become a symbol of the monarchy's longevity and prosperity. 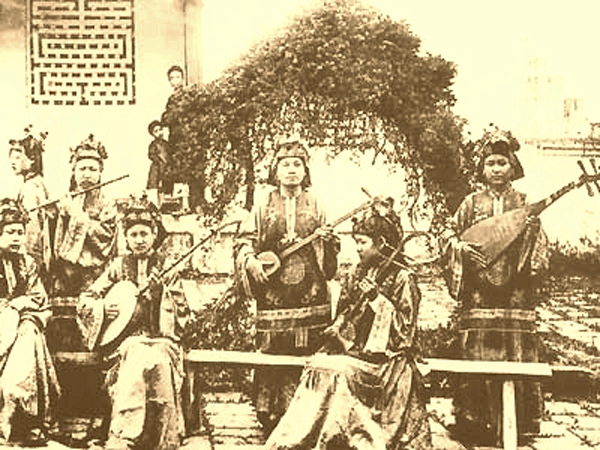 Royal court music was formed in the 10th century, but due to historical reasons, there were no related documents until the end of Tien Le dynasty. During the Ly - Tran dynasties, royal court music was clearly expressed through royal dances. During the Tran Dynasty, singing and dancing activities were often organized with the help of Tieu Nhac and Dai Nhac orchestras. By the reign of King Le Thanh Tong, this kind of music stabilized and was formalised as the traditional music of Vietnam as people began to distinguish the royal instruments from folk instruments. By the Le, Mac, Trinh - Nguyen dynasties, royal court music was degraded, but under the reign of Lord Nguyen Phuc Nguyen (1623-1634), a new system of court music was established. 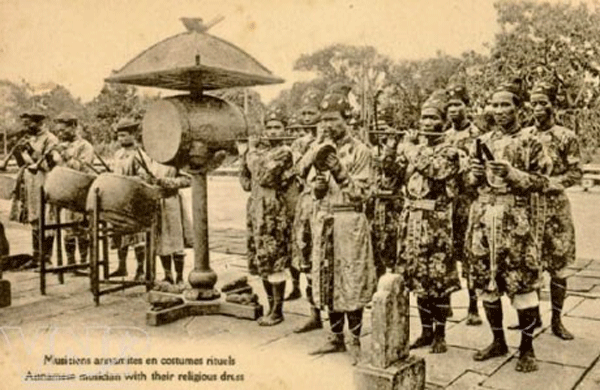 The orchestra of royal court music under the Nguyen Dynasty. Photo: adammuzic

The two main documents of Phan Huy Chu (early 19th century) and National Historiographers' Office (mid-19th century) indicated that: “...At that time, many theaters of all sizes for kings, ministers and civilians were built as a place to perform royal music, classical music, “boi” singing or folk music. For example, Minh Khiem Duong in Tu Duc Mausoleum, Duyet Thi Duong in the Imperial Citadel, Cuu Tu Dai in Ninh Tho Palace, Ong Hoang Muoi Theater, and Mai Vien Theater at the residence of Minister Dao Tan are outstanding works…” 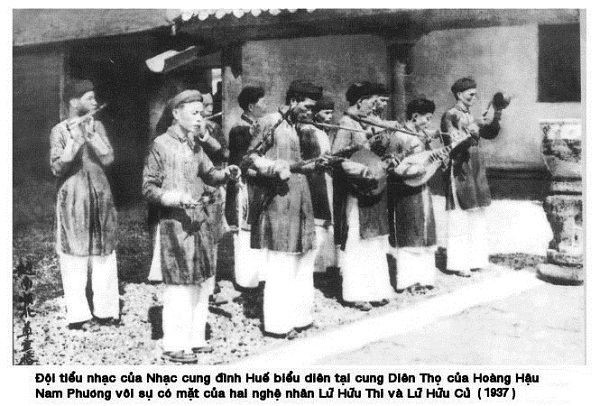 The mini orchestra of Queen Nam Phuong (in 1937) - the wife of King Bao Dai. Photo: adammuzic

During the reign of King Gia Long, a big court music organization named “Viet Tuong Doi'' was established with 200 artists. The king also built the Thong Minh stage for activities of singing and dancing in Ninh Tho palace. Under the reign of King Minh Mang, the king changed the name of the above-mentioned organization to “Thanh Binh Vi”; established a new female music team with 50 female singers and dancers; and built the “Church of the Patriarchs of Hue Music and Singing Arts”. In front of the church, there is a stele with a description of the development of performing arts under the reign of King Minh Mang. During King Tu Duc’s time, Hue court music reached its peak. Legend has it that it was King Tu Duc who composed the famous "Tu Dai Canh" song.

In 1858, the French colonial empire began to invade Vietnam, so the Nguyen kings after Tu Duc lost all power, leading to the degradation of royal life and royal music. On August 31 (1945), King Bao Dai abdicated, and Hue royal court music was temporarily disbanded.

Since 1975, Vietnam has had a policy of preserving and developing Hue royal court music. 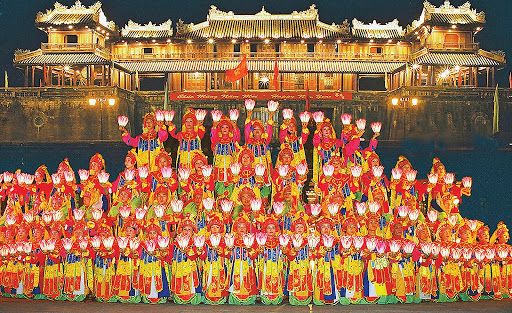 What is special about Hue royal court music?

The regulations on the size of the orchestra, the method of performance or the content of the music are managed and followed extremely strictly, which reflects the standards through very aesthetic institutions and the ideas and philosophies of the contemporary monarchy. The royal court music system was diverse with hundreds of songs written in Chinese. All of the songs were compiled by the Ministry of Home Affairs to suit the purposes of each court ceremony. The groups of songs include: 10 songs with the word “Thanh” (success) for ceremonies related to external relations, 7 songs with the word “Phong” (fruitful crops) for ceremonies praying for the best things for the society, 9 songs with the word “Hoa” (harmony) for ritual ceremonies, etc. 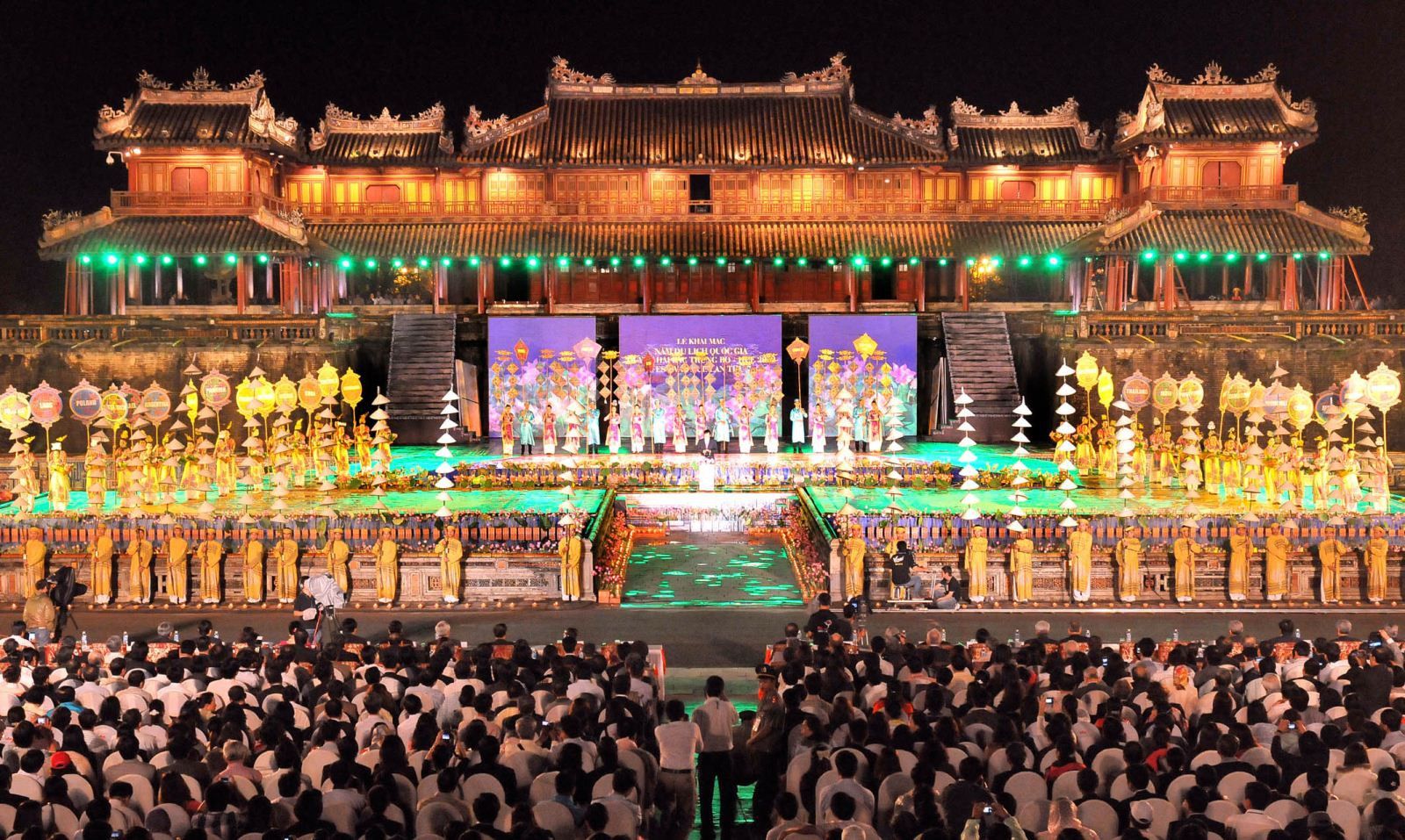 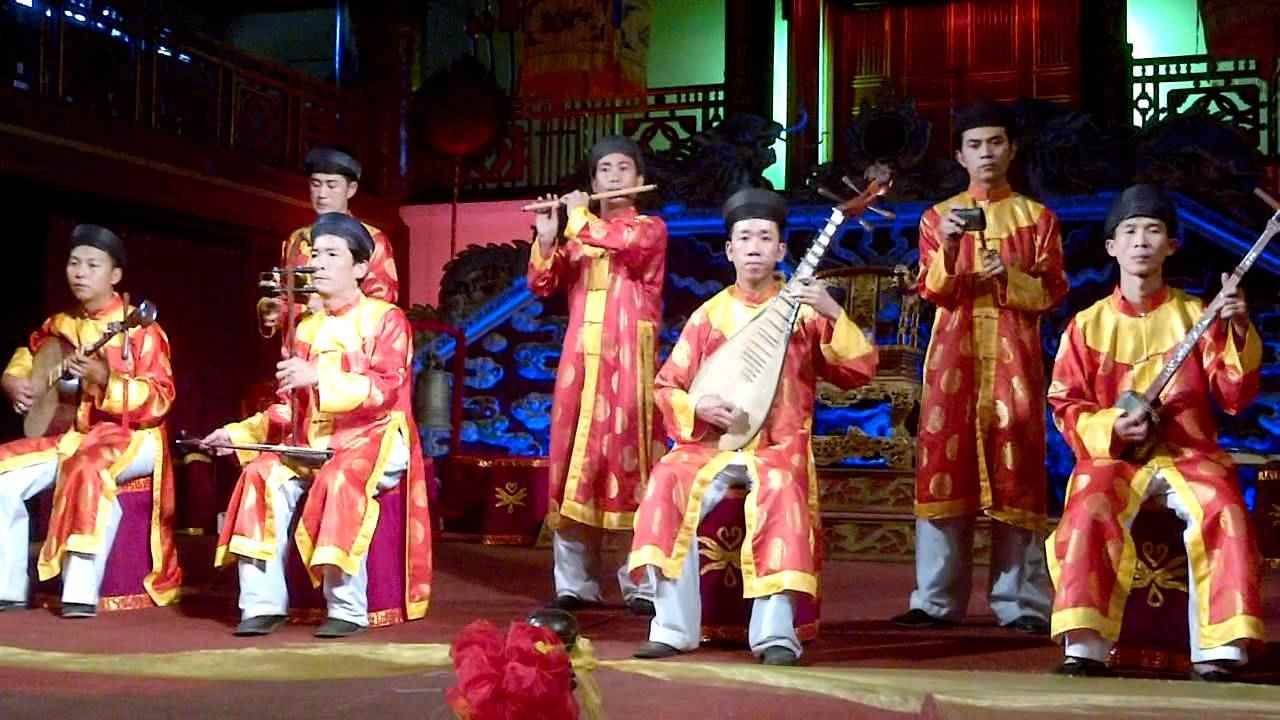 Hue royal court music not only has a diverse instrumental system, but it also includes performing arts. Performing artists must be trained meticulously and rigorously. The musicians must pay attention and listen to each other, especially the drum signal to have a rhythmic and harmonious performance. 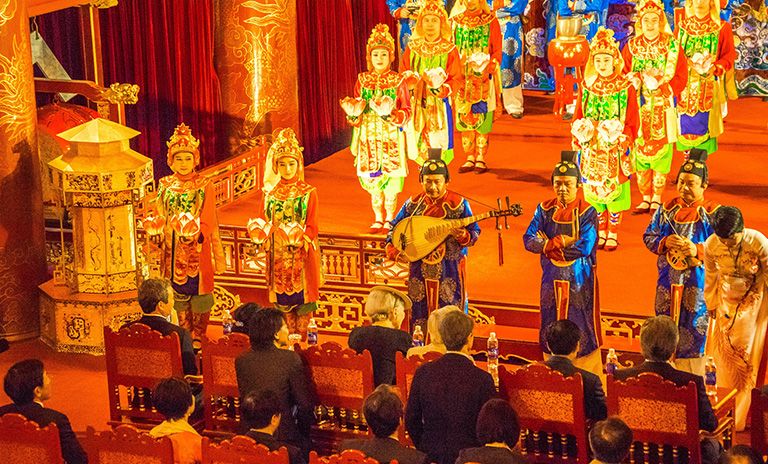 Hue royal court music contains both the music system based on the pentatonic scale and the arts of playing instruments. When it comes to this kind of music, it is referred to the technique of instrumental performance, in which each instrument requires a certain level of technical virtuosity. 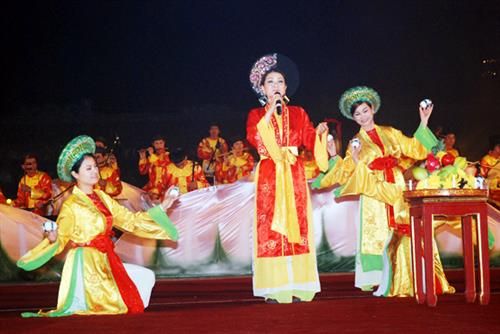 Royal music is a diverse synthesis from many factors. Photo: Thua Thien Hue Department of Tourism 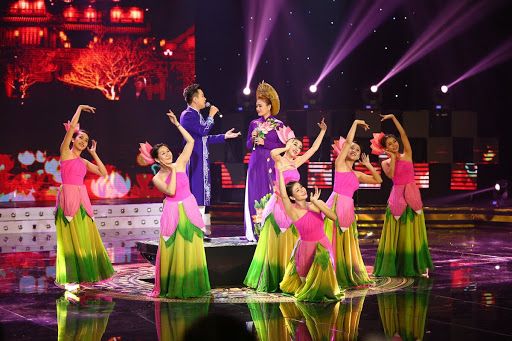 The graceful girls in traditional royal ceremonial costumes, who can perform well in each dance that clearly shows the rich cultural identity of Vietnam, will definitely leave you with a strong impression. 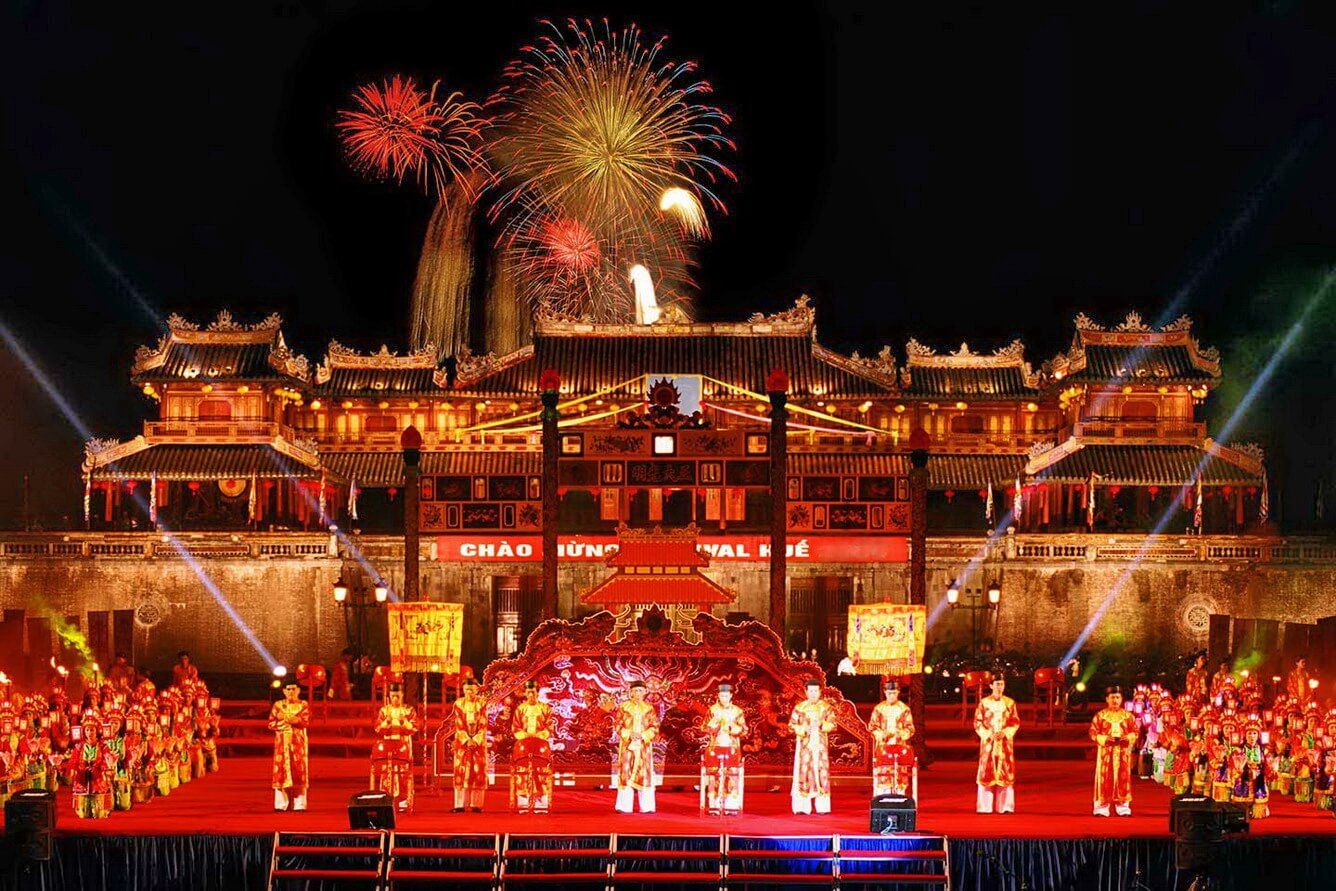 On November 7, 2003 in Paris, Mr. Koichiro Matsuura - the General Director of UNESCO - officially announced that this organisation recognised Hue royal court music as one of 28 masterpieces of the oral and intangible cultural heritage of mankind for the second time. This is the first piece of intangible heritage of Vietnam recorded in this list.

With ethereal connotations, Hue royal court music is often performed at annual ceremonies, including celebrations, religious rites, as well as special events of the country. 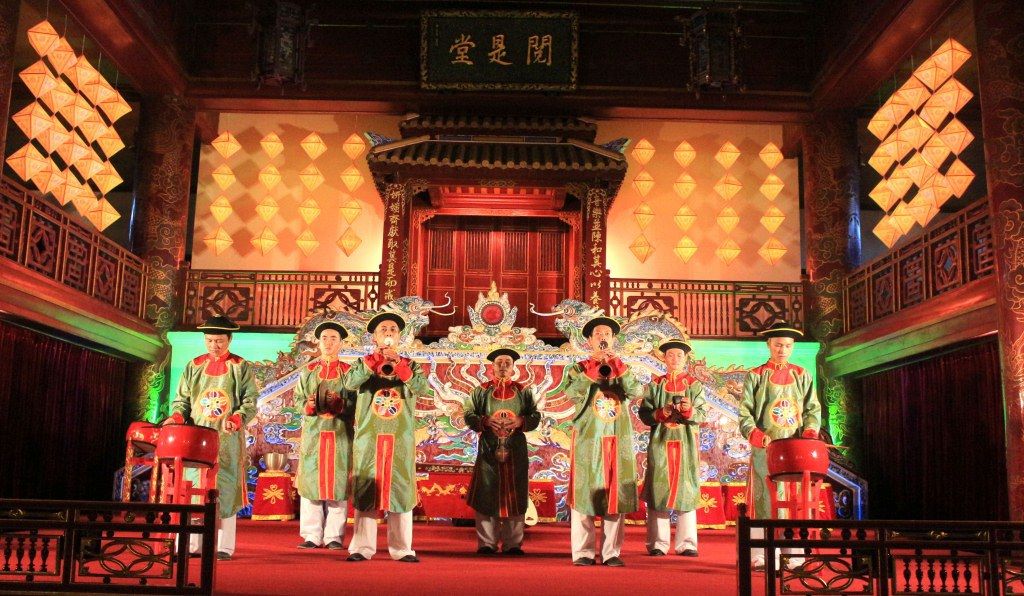 Hue is a developing province in Vietnam, and it has been offering royal art performances to attract domestic and international tourists. Each performance is meticulously organized and choreographed, including many sub-performances and musical instruments. Participating in these events, you will have the feeling of being lost in a luxurious palace that is both majestic and solemn. 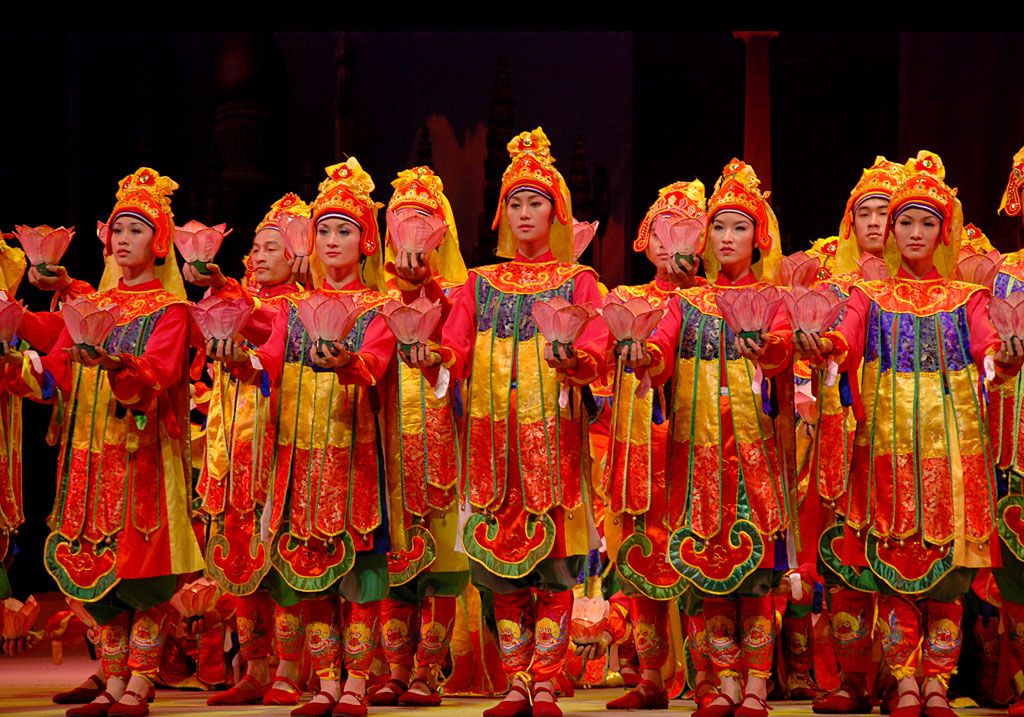 Each performance is meticulously organized and choreographed, including many sub-performances. Photo: dulich24

Where can you enjoy Hue royal court music?

When having the opportunity to visit Hue, you should go to the ancient theater of Duyet Thi Duong, which is the main stage to perform royal court music for tourists. These unique art performances are held twice a day to ensure the flexibility of time for you: From 10:00 - 10:40 in the morning, and from 15:00 - 15:40 in the afternoon. Each performance takes you 40 minutes, with the ticket price in 2020 of VND 200,000. 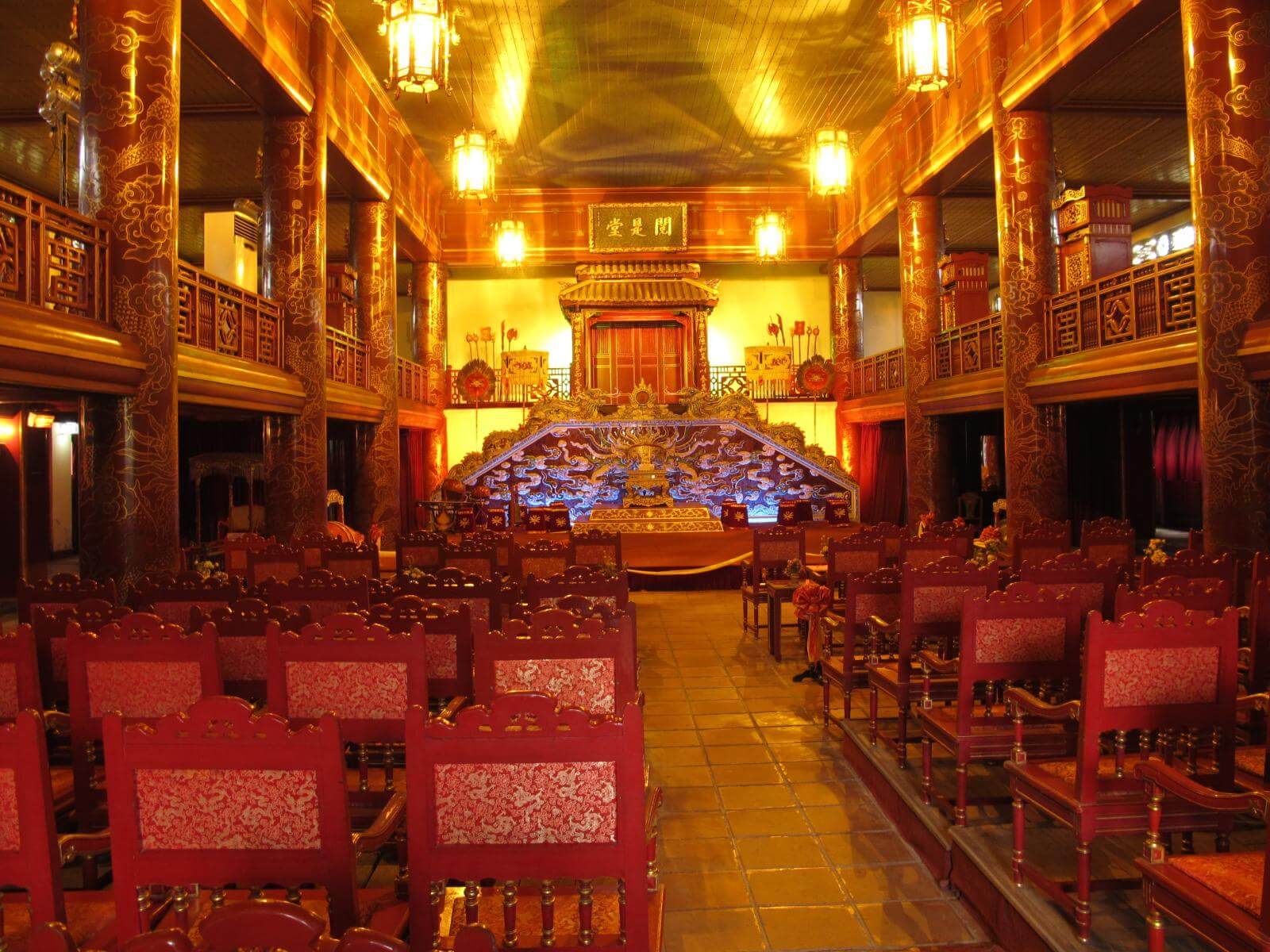 You can also participate in the Hue Festival which is held every 2 years (in even-numbered years) to enjoy the unique cultural activities as well as Hue royal court music. The festival has many programs, such as: Royal Palace Night, Nam Giao Ritual Ceremony, Truyen Lo and Vinh Quy Bai To Ceremony, Ao Dai Festival, Sea Festival, Kite Flying, Poetry Festival, Country Market Festival, Human Chess Competition, Boat Racing and so on. Hue Festival is usually held from the end of April to the beginning of May.

When coming to Hue, you should definitely enjoy Hue’s royal court music to experience the cultural values of Vietnam. This is also an opportunity for you to understand more about this long-standing ancient capital.