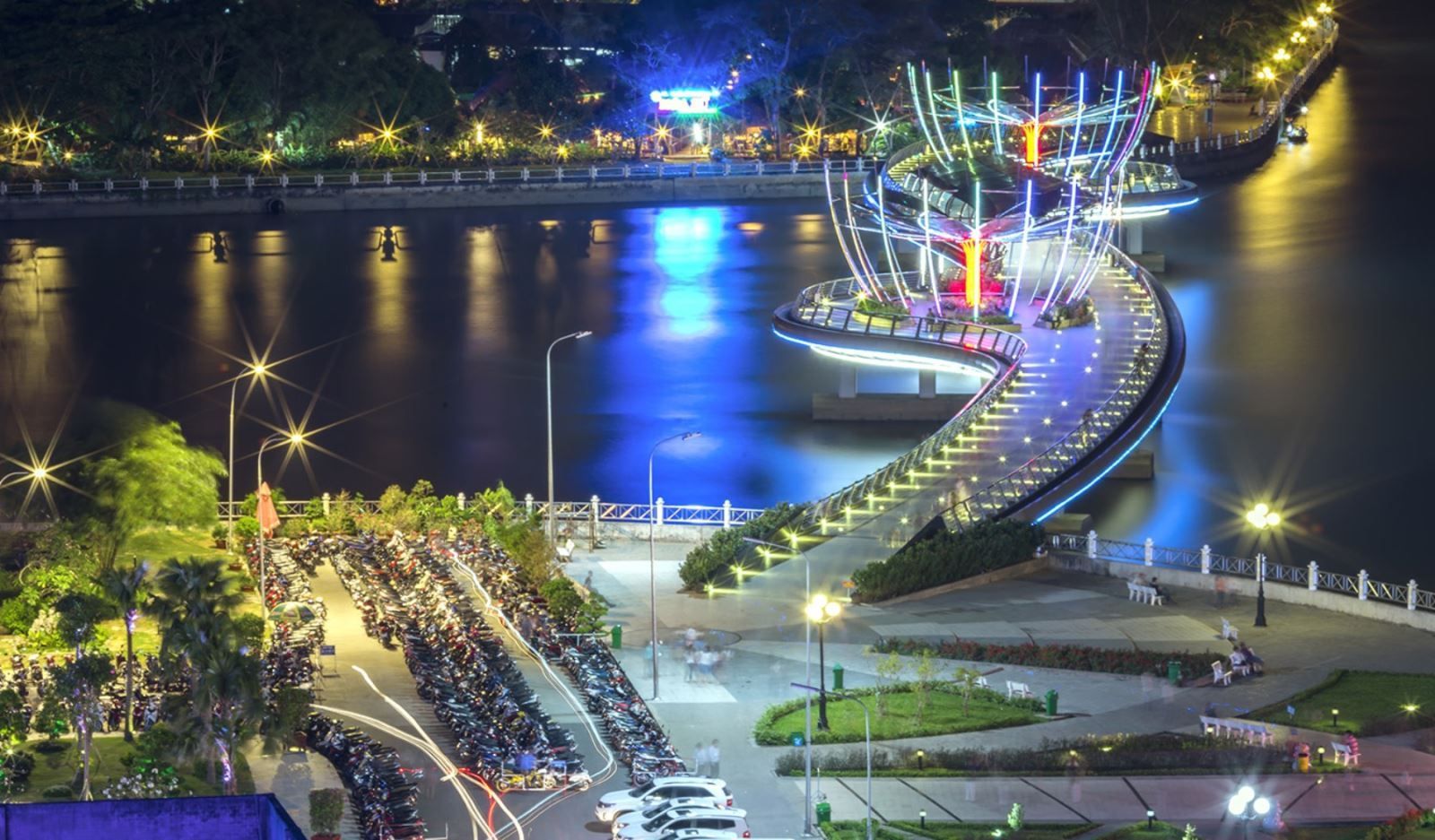 Can Tho people have a folk song: "Can Tho has Ninh Kieu wharf - a poetic river and many beautiful people". The charming natural scenery of Ninh Kieu wharf has not only become a symbol of culture and tourism of this city, but it has also inspired many poets.

An introduction to the construction of Ninh Kieu Wharf

Ninh Kieu Wharf, also known as Ninh Kieu Park, is located on the right bank of Hau River, between the confluence of Hau and Can Tho River. It is not only a wharf, but also a tourist and cultural destination that was constructed in the 19th century. 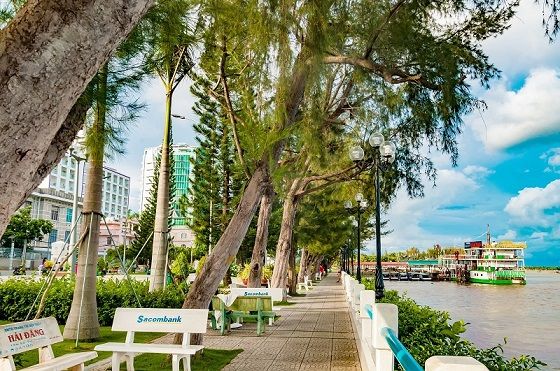 Currently, there is no document related to the history of Ninh Kieu wharf, but according to some studies, during the reign of King Gia Long, it used to be a wharf at the entrance of Can Tho market. One day, the king traveled to the South and stopped to rest at this wharf, then he heard a lot of music, singing, and recitation resounding in the very charming scene, so he named the river “Cam Thi Giang” (the river of musical instruments and poems). 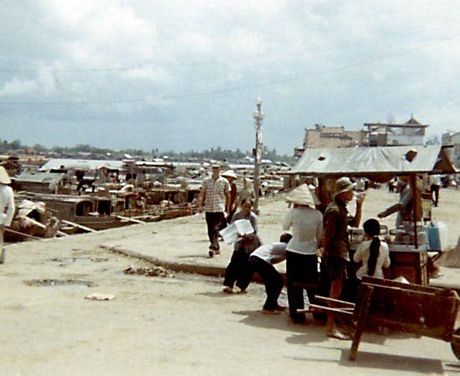 The editor Huynh Minh wrote: “There used to be a lot of visitors at the banks of the Can Tho river. On moonlit nights, the river resounds with singing of “Khach Thuong Ho” (the people living on boats on the river) and the sounds of musical instruments of the amateur artists. Therefore, it was said that when Lord Nguyen Anh hid himself in Can Tho, he named the river ‘Cam Thi Giang’, which means the river of poetry and singing. Over time, the two words ‘Cam Thi’ were pronounced as ‘Can Tho’ as they are today.” 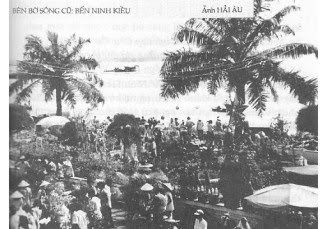 Ninh Kieu in the past was also known as Hang Duong. Photo: sites.google

By the end of the 19th century, the French authorities had rebuilt the wharf with many restaurants, eateries, kiosks, etc. Along the river, there were 3 wharfs to support ships transporting goods to the provinces of Cochinchine, namely Nam Vang Cargo Wharf (also known as San Heo wharf), Ice Firm Wharf (at the end of Thu Khoa Huan street), and Luc Tinh wharf (on Ngo Quyen street - the part with the triple lamp).

In 1876, the wharf was named “Quai de Commerce”, but the locals were familiar with the name “Hang Duong” as there were rows of casuarina trees along the river (in Vietnamese,  “Hang Duong” means “rows of casuarina”). In 1954, the sign "Quai de Commerce" was taken down and the name of the wharf was changed into Le Loi as it was next to Le Loi street. In 1957, the wharf was remodeled, including more flowers, ornamental plants, stone benches, and embankments. After its completion, the wharf was renamed “Ninh Kieu”, and since then, it has been the place to organize events of southern amateur music or Dharma lectures by Zen masters. 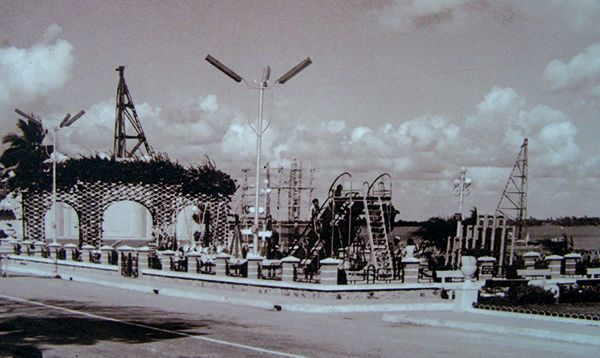 In 1996, Ninh Kieu wharf continued to be expanded and upgraded with an embankment running to Xom Chai ferry terminal. In 2005, the market area specialising in fresh seafood around the wharf was moved, leaving this place a peaceful scene with its original historical and cultural significance. Additionally, Le Loi Street along the riverside has also been reconstructed as a pedestrian zone as well as the first night market of Can Tho city.

Ninh Kieu Wharf has become a symbol for Can Tho people through the folk song:

"Can Tho has Ninh Kieu wharf

a poetic river and many beautiful people

Returning to the hometown without old friends"

When visiting Ninh Kieu wharf, you should not ignore these following destinations: 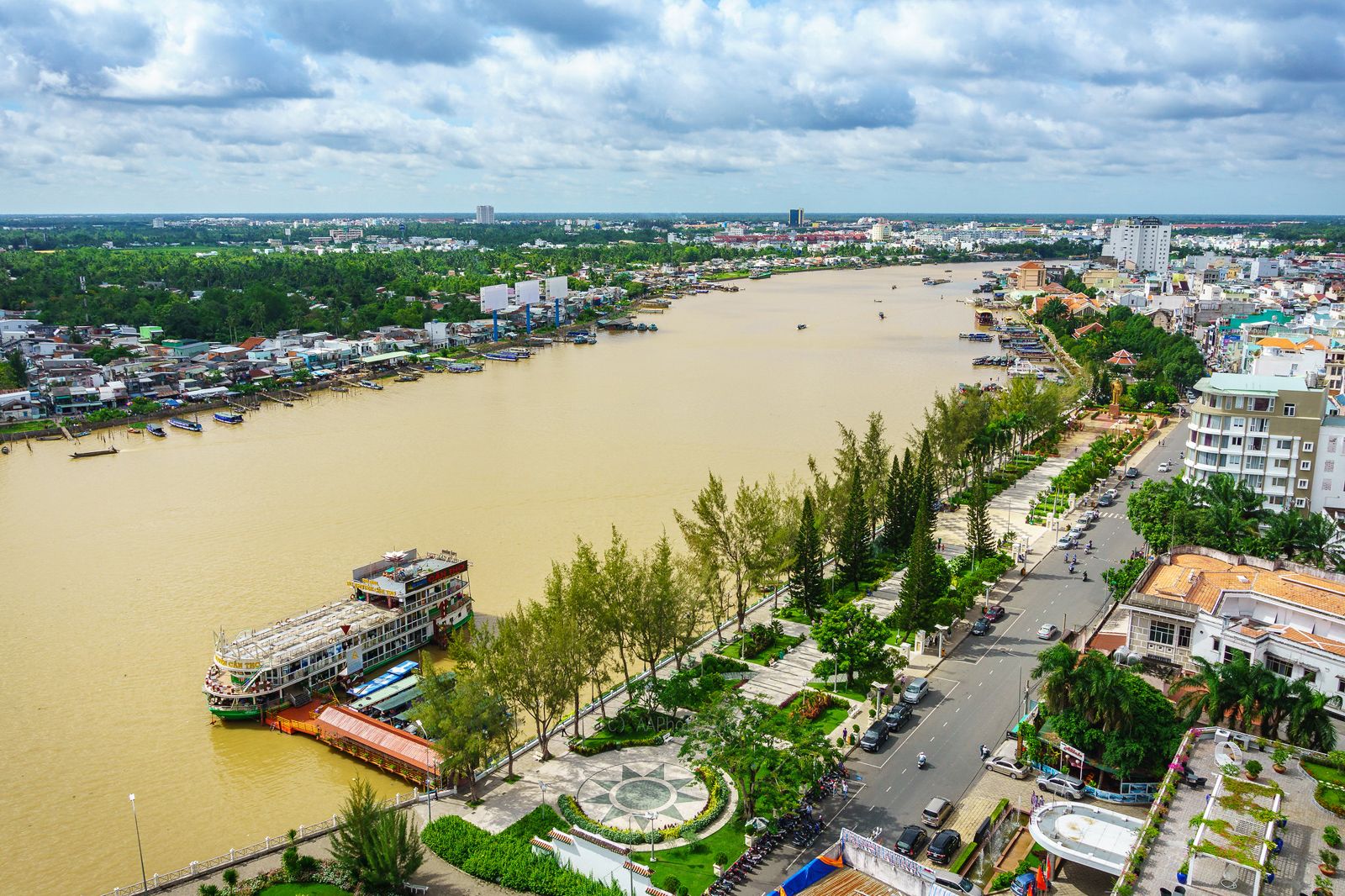 Ninh Kieu today is not only a wharf, but it is also a park running along the bank of the Hau River, where activities of important ceremonies take place.

When coming here, you can immerse yourselves in the vast space of Southwest Vietnam full of rivers - each fresh cool breeze will bring a feeling of relaxation and peace for your soul. In the evening, the park is more bustling as many tourists and locals come here to walk, stroll or have some snacks. 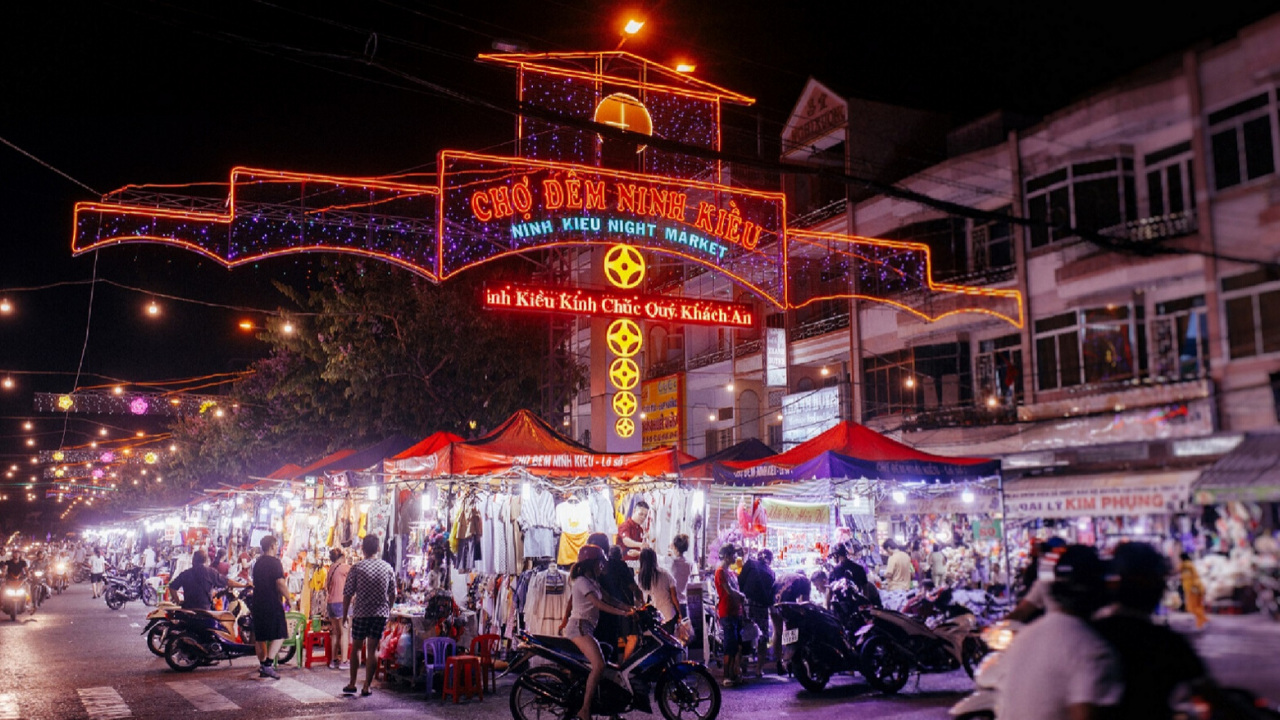 Ninh Kieu Night Market is located on Hai Ba Trung Street, Tan An Ward, Ninh Kieu District - which is next to Ninh Kieu park to the right. The market is open from 16:00 - 00:00 and is also quite large and clean. The stalls are well-arranged in the middle of the road to bring convenience for visitors. 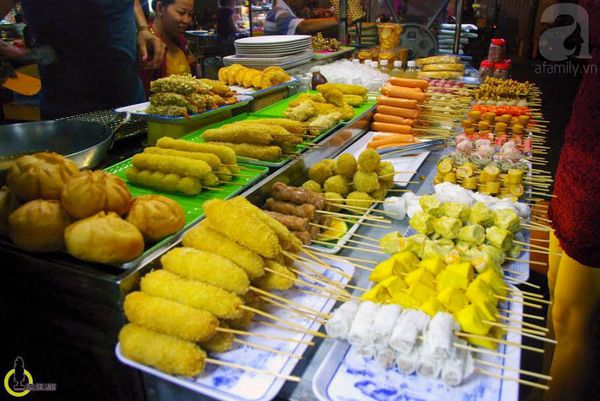 Ninh Kieu night market has a variety of items, from clothes to fruits, especially typical snacks of this land. As the major fruit provider in Southwest Vietnam, the market offers various fresh and eye-catching fruits such as oranges, jackfruit and mango, which will immediately attract you. In addition, the market has a lot of grilled food such as chicken wings, chicken feet or octopus; while types of sweet soups are also diverse with lotus seed sweet soup, Thai sweet soup, Khuc Bach sweet soup, etc. that will immediately stimulate your appetite.

Enjoying dinner at a floating restaurant

Enjoying dinner at a floating restaurant on the Hau River. Photo: Can Tho Cruise Restaurant

Ninh Kieu Wharf has a number of floating restaurants on cruises, which will take you around the Hau River and serve dinner with a variety of dishes featuring the culture of Southwest Vietnam, such as hot pot with fish sauce, dishes from snakehead fish, grilled pseudapocryptes elongatus fish with salt and hot chilli, etc. At the same time, you will be able to enjoy the cultural performances imbued with the cultural identity of the Southwest region such as Southern amateur music or Vietnamese Folk Opera. 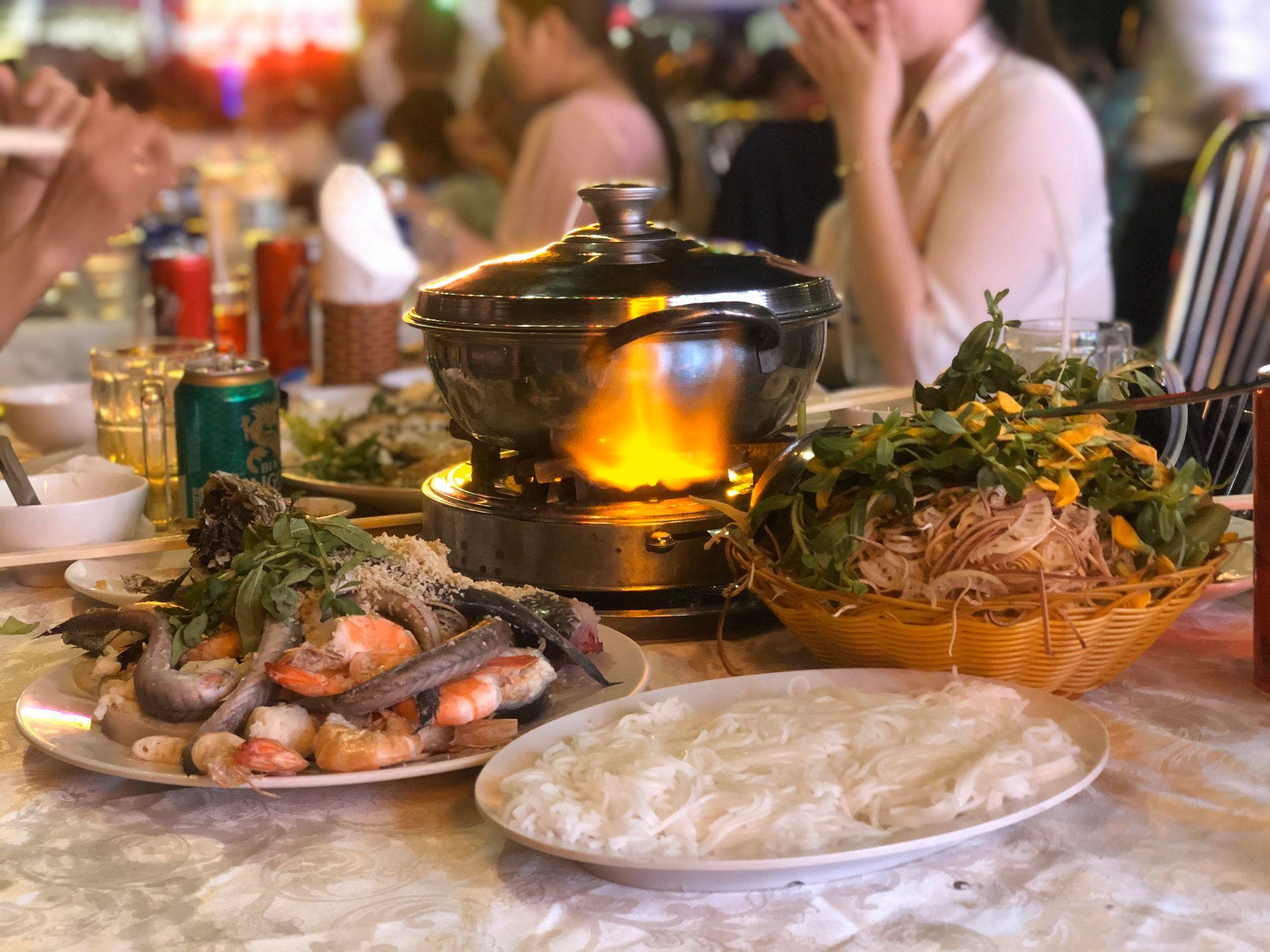 Dishes featuring the culture of Southwest Vietnam are served at the floating restaurant. Photo: Can Tho Cruise Restaurant

If you take a cruise on the full moon days, you will be able to see the complete beauty of the river here. The full moon radiates light as if gilding the river surface, which is a sparkling scene. 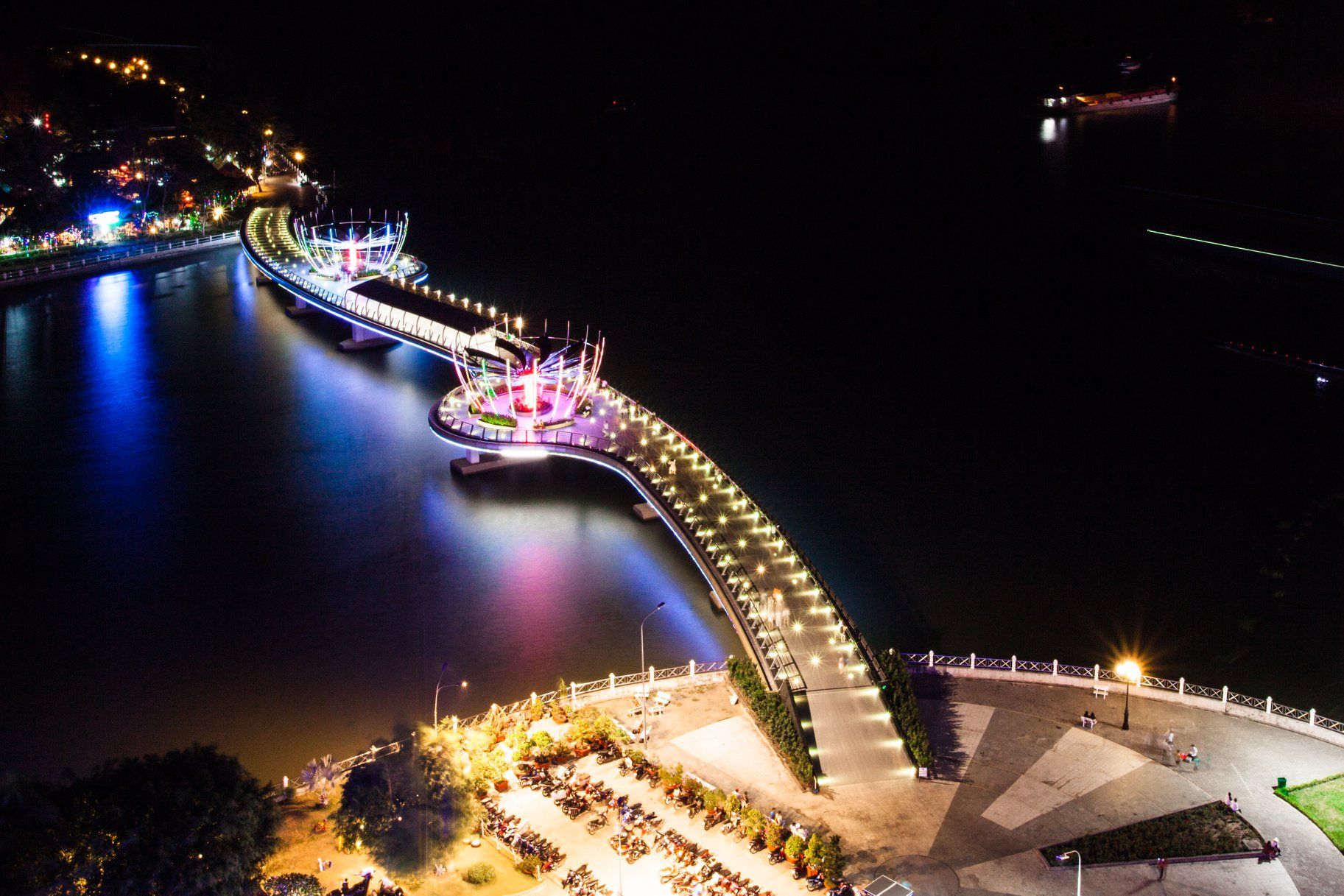 The pedestrian bridge is designed in the shape of the letter S of Vietnam. Photo: thamhiemmekong

Within 3 minutes from the park, you can easily go to the pedestrian bridge, which is also known as the love bridge. This is a relatively new destination that has been considered as a highlight for Can Tho tourism. The bridge has a winding design representing the shape of the letter S of Vietnam while in its middle is a lotus calyx with colorful LED lights. 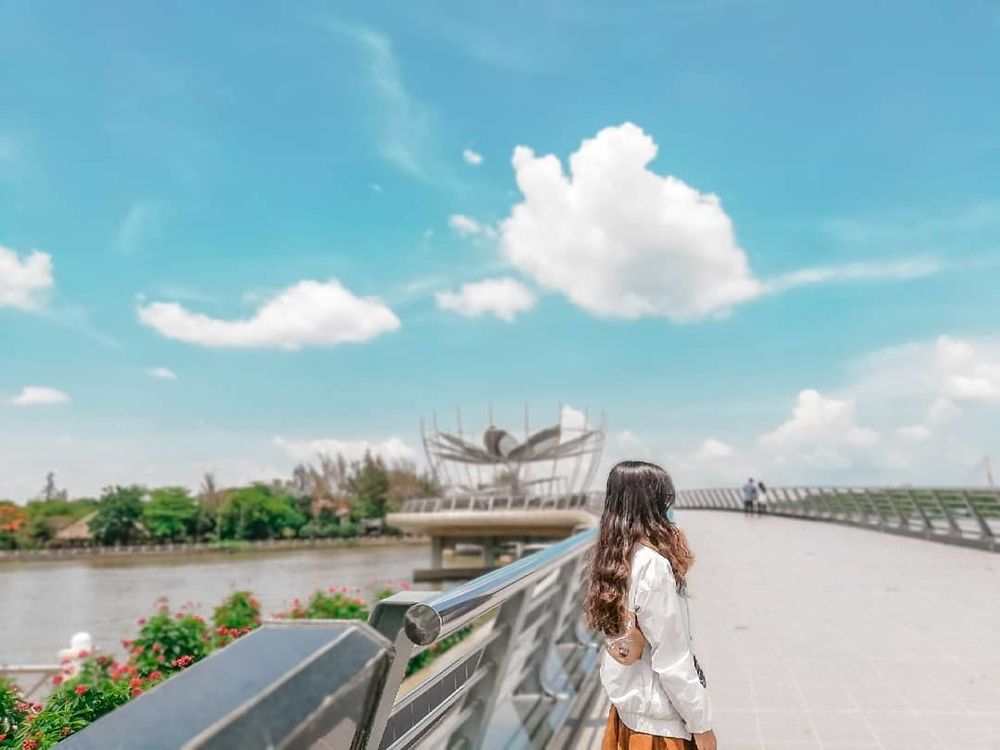 The pedestrian bridge is quite empty in the morning but crowded and bustling in the evening. Photo: Yan

Standing on the bridge, you can see the famous Can Tho bridge afar. Close your eyes and feel each breeze carrying the scent of alluvial from the river, you will be able to find peace of mind. If you want to immerse yourself in the bustling and shimmering atmosphere of the pedestrian bridge, you can visit this place in the evening.

Ninh Kieu Wharf is not only a tourist attraction, but it also has historical and cultural values, which has made it a symbol of Can Tho city. When visiting Ninh Kieu, you will be able to feel the idyllic and generous features of Southwest Vietnam that are hard to find elsewhere.

Reference: Can Tho Newspaper