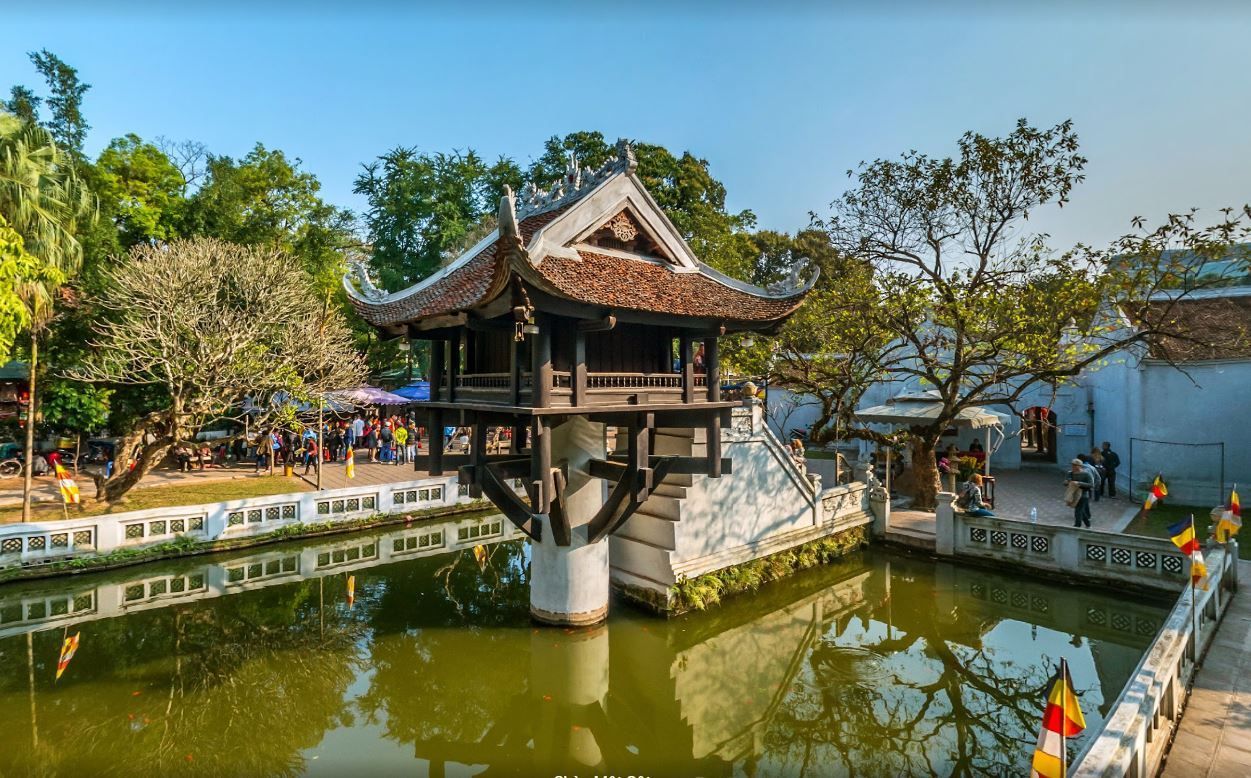 Visiting One Pillar Pagoda - the thousand-year cultural symbol of Vietnam

Hanoi is the “thousand-year-old cultural capital” of Vietnam, where you can visit places of long-standing values, especially One Pillar Pagoda, which attracts visitors with its unique architecture that cannot be found anywhere else.

Location of One Pillar Pagoda

One Pillar Pagoda was originally named “Lien Hoa Dai'', which means “Lotus Calyx” in Vietnamese, with a unique architecture: a shrine placed on a single pillar. The pagoda is located in the grounds of the Ho Chi Minh Mausoleum, next to the Ho Chi Minh Museum in Doi Can Ward, Ba Dinh District. 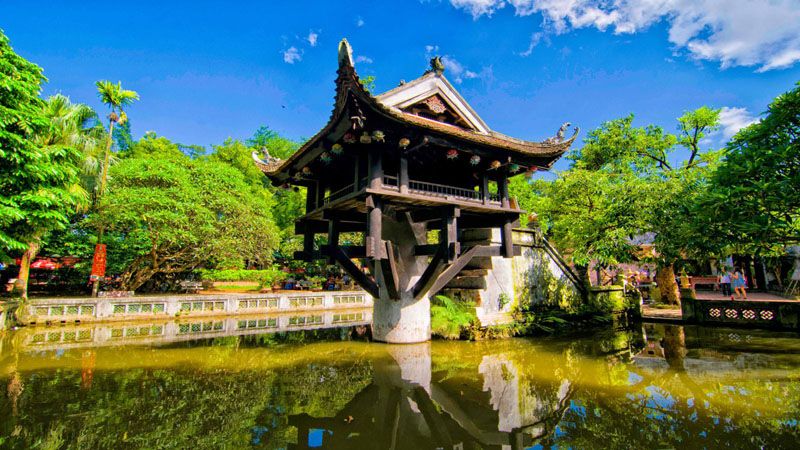 The history of the One Pillar Pagoda

One Pillar Pagoda is said to have been constructed in the year of Buffalo in 1049, under the reign of King Ly Thai Tong (1028-1054), whose dream laid the foundation for the architecture of the pagoda. At that time, the king dreamed that the Guanyin Buddha sitting on a lotus calyx led the king to the throne. After that, the king told this story to the courtiers, then he was advised by the monk Thien Tue to build a pagoda based on the shape of the lotus of Guanyin Buddha and place it on a stone pillar. After the pagoda’s construction, the monks went around it and chanted sutras to pray for luck. That is why the pagoda was named Dien Huu (long-lasting blessing).

During the reign of King Ly Thanh Tong, the pagoda was more complete. The book “Complete Annals of Dai Viet” stated: "At that time, the king renovated Dien Huu pagoda to make it more beautiful than it was before by building Lien Hoa Dai lake - which is known as Linh Chieu lake - and constructing a relief corridor surrounding the lake. Outside the corridor is a lake called Bich Tri with a curved bridge like a rainbow. In front of the pagoda yard, there is a stupa”. Every year, on the fourth day of the eighth lunar month, the king went to the pagoda to perform the “Buddha Bathing Ceremony” with the participation of people in Thang Long capital, followed by a ceremony to set free animals - the king would stand on a high platform in front of the pagoda and release a bird to the cheers of the people.

During the Tran Dynasty, the pagoda was relocated to its old position. Under Le Trung Hung, Dien Huu pagoda and the lotus calyx were seriously degraded, and then during the Nguyen Dynasty, in around 1840 - 1850, they were restored. 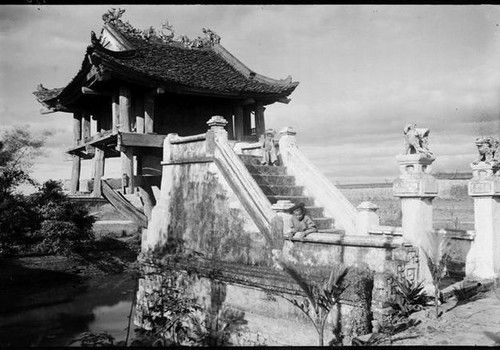 The One Pillar Pagoda in 1896. Photo: phatgiao.org

In 1954, before the French troops withdrew from Hanoi, they laid mines to destroy the One Pillar Pagoda. After that, it was rebuilt according to the old architecture in 1955 based on the design of architect Nguyen Ba Lang as it is today.

The unique architecture of One Pillar Pagoda

One Pillar Pagoda was recognised as "The most unique pagoda in Asia" in 2012 by the Asian Record Organization. 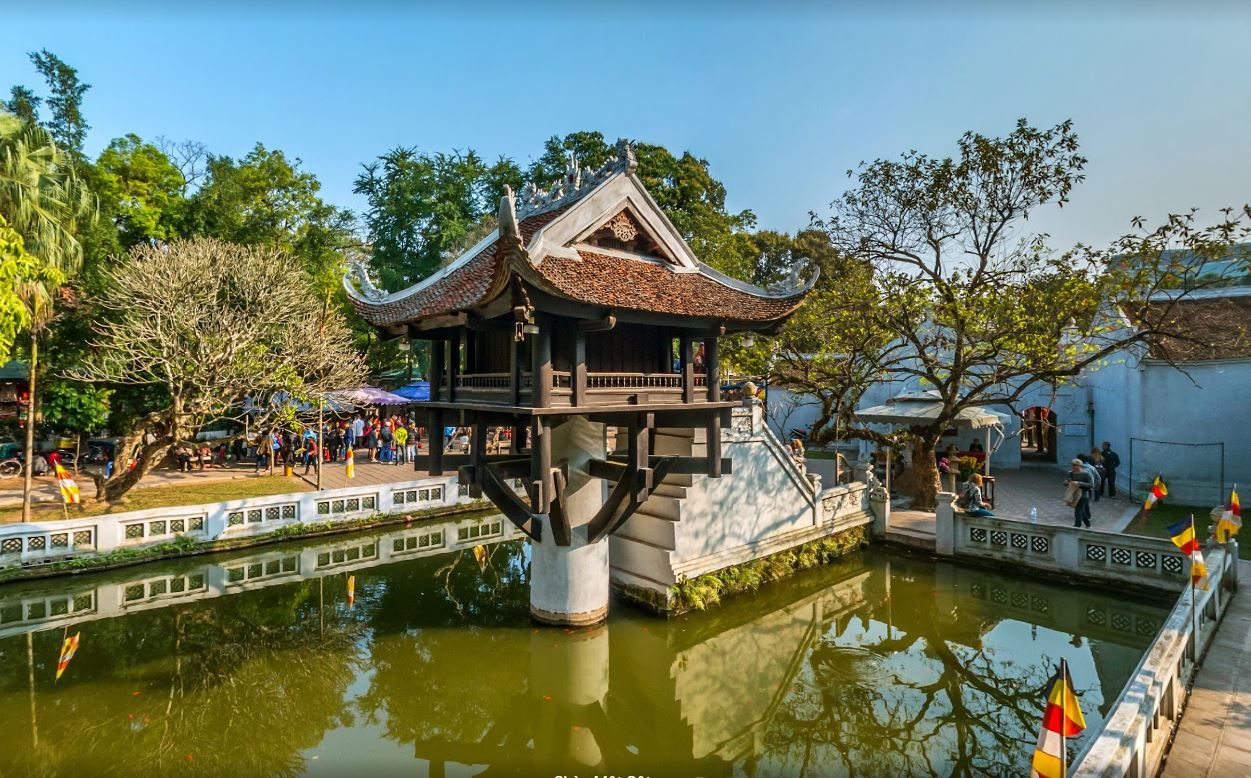 The pagoda has a unique beauty with a single-pillar structure. Photo: BestPrice

Despite its small scale, the pagoda has a unique beauty with a single-pillar structure that looks like a lotus in the middle of the lake, which is a combination of many different techniques from sculpture, carving to painting. 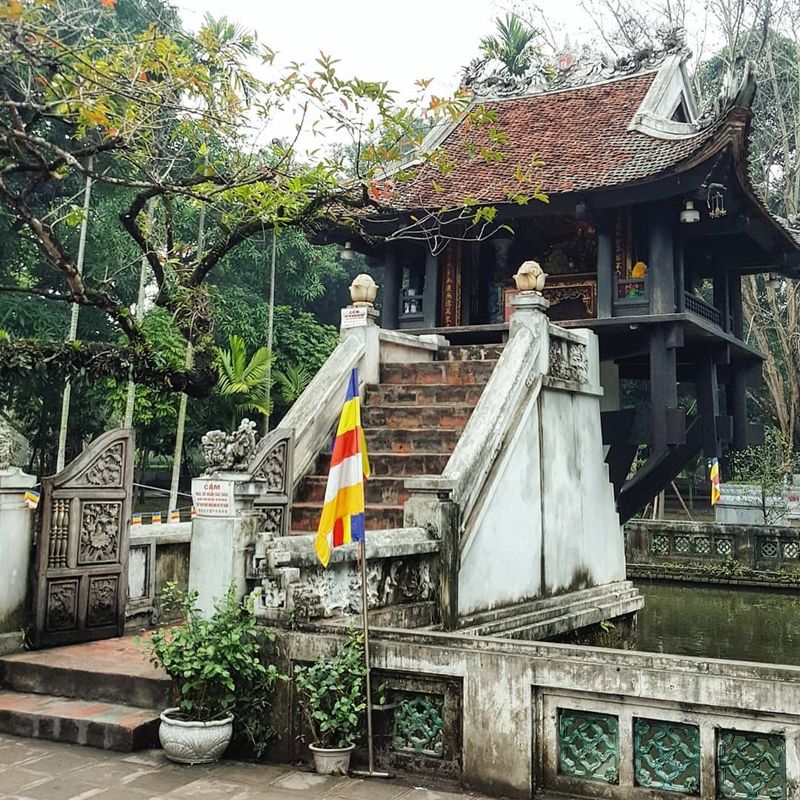 The pagoda is built in a square block. Photo: @kimberleyyly

The pagoda today has a pillar, a lotus calyx and a roof, which is built in a square block with a length of 3m. Below the pagoda is a stone pillar with a height of 4m and a diameter of 1.2m, consisting of two blocks attached to each other. On the body of the pillar are eight wide wooden bars spreading like a blooming lotus flower reaching up to escape the human world. The lotus flower is deemed as a sacred symbol in Buddhist culture, which represents the virtues of patience, honesty, and integrity. The roof of the pagoda is curved like the tip of the blade soaring up to the sky, which is tiled with traditional red bricks and has been covered with moss over time. Above the roof of the pagoda is the image of the moon, while on both sides are two dragons. According to the principles of feng shui, the dragons represent “Yang Qi”, while the moon represents “Yin Qi”. The number three (these three items) is the symbol of fertility, for this reason, when going to the temple, people often offer three incense sticks, which symbolize the three objects in the "two dragons adoring the moon". 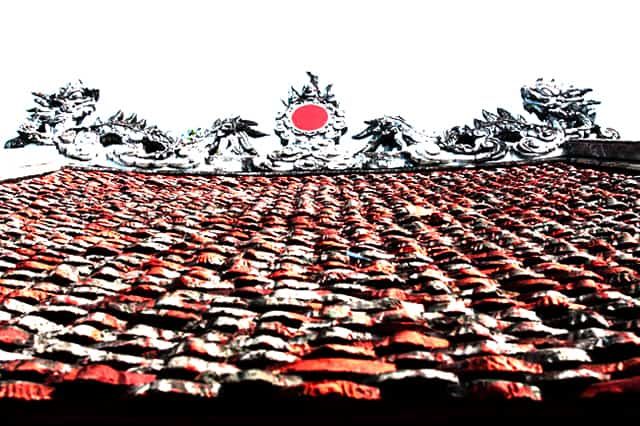 The image of "two dragons adoring the moon" on the roof of the pagoda. Photo: Vntrip

Inside the pagoda, the statue of Guanyin Buddha is located on a wooden lotus flower painted with gold and crimson colours, above which is a horizontal lacquered board written "Lien Hoa Dai" in Chinese. There are many worshiping objects inside, such as a pair of ceramic vases, a lotus flower vase, a sacrificial tea-set, and a bronze incense burner. The altar is also painted with gold and crimson colours, while decorated with many patterns of majestic yellow clouds. 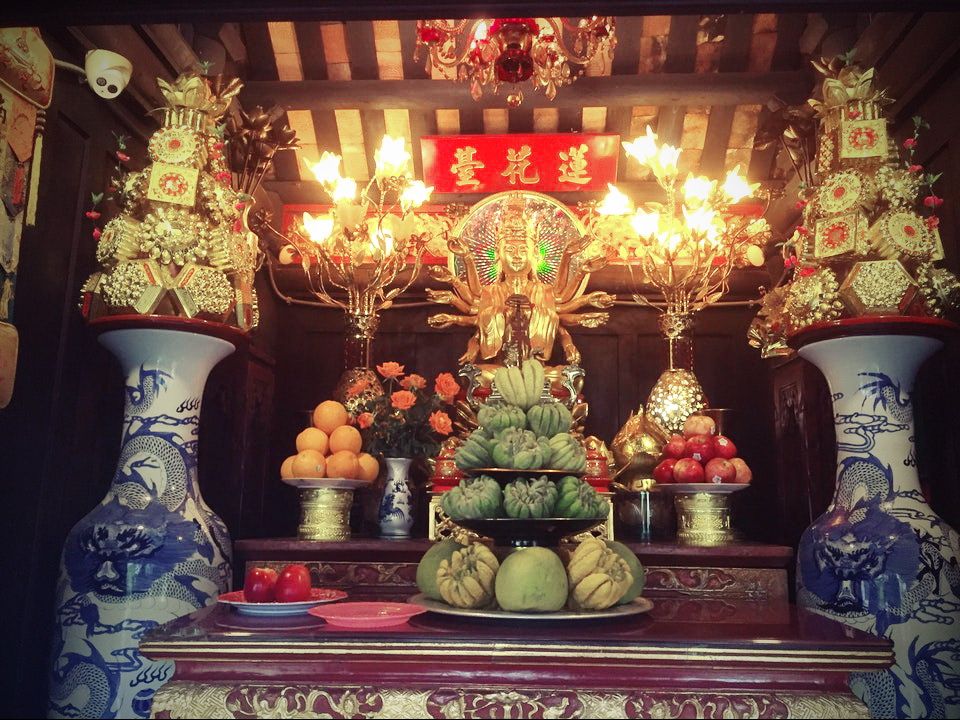 The Guanyin Buddha statue is located on a lotus inside the pagoda. Photo: dulichvietnam

In front of the yard of Dien Huu pagoda is Bach Tuynh stone tower, which has a small bridge leading to the One Pillar Pagoda. On the first days of the lunar month or the full moon days, people often hold a ceremony to clean and offer incense in the pagoda, which attracts a lot of tourists who come here to visit and worship the Buddha. 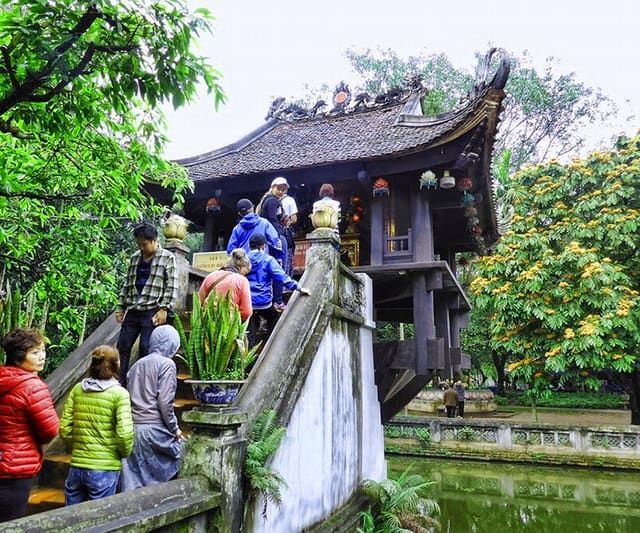 You can visit One Pillar Pagoda from 7am to 6pm on weekdays.

Ticket price: One Pillar Pagoda is free of charge for Vietnamese citizens. For foreign tourists, the applicable fee will be VND 25,000/person (in 2020).

Some notes when going to One Pillar Pagoda 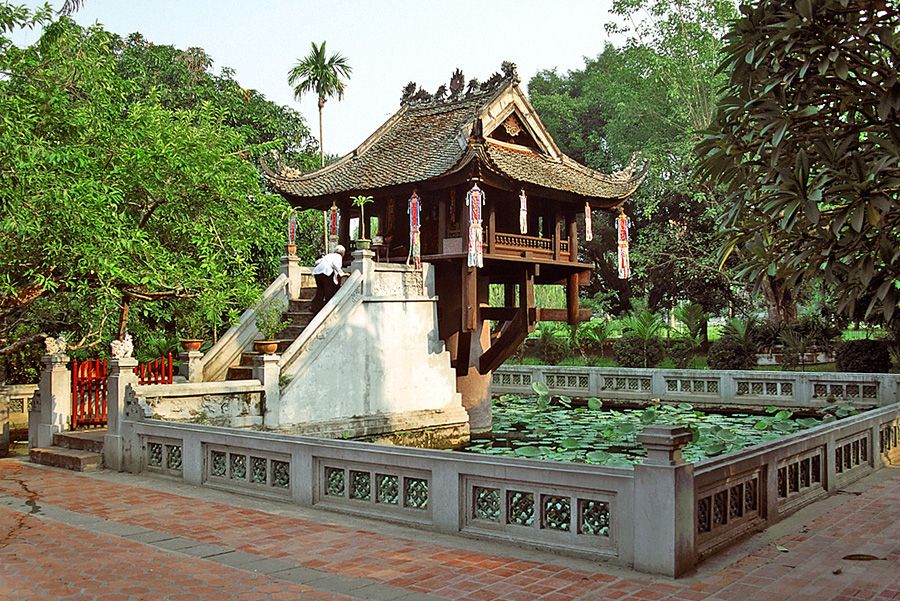 One Pillar Pagoda is both a historical and a sacred place, so when coming here, don’t forget to:

- Choose neat and polite clothes that are suitable to the customs and culture of the Vietnamese people.

- Keep quiet when visiting the pagoda.

Visiting Hanoi with “thousands of years of civilization”, you should not miss the opportunity to admire the One Pillar Pagoda - one of the symbols of the capital of Vietnam. The tranquility and ancientness of this place will give you peaceful moments amidst the bustling life.