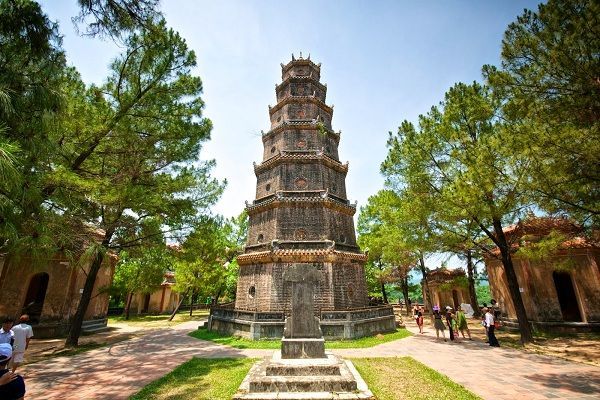 The most sacred ancient pagoda in the ancient capital of Hue

The ancient capital of Hue is not only famous for the mausoleums of the Nguyen Dynasty, but it is also a land of “Zen Scriptures” with many large and small pagodas dating back to the time of monarchy. One of the most sacred pagodas which has become the symbol of Hue is Thien Mu.

The history of Thien Mu Pagoda

Thien Mu is also known as Linh Mu pagoda, which is located on Ha Khe hill on the north bank of Huong River, Kim Long ward. From the center of Hue city, travel a distance of about 5km to the west and you will reach this pagoda.

The pagoda was built by Lord Nguyen Hoang - the first lord of the Nguyen family in Dang Trong (the ancient South region of Vietnam) in 1601 - during the time he guarded the Thuan Hoa area. During a horseback riding along the banks of the Huong River to examine the terrain, he caught sight of a small poetic green hill jutting out from the water, which was like a dragon looking back. The locals also told him that at night, there was usually an old woman dressed in red and green standing on the hill while saying: "A true lord would come here to build a pagoda to gather spiritual energy for a stronger Vietnam". Finally, the king decided to construct a pagoda to maintain the good feng shui here, leading to the name Thien Mu (“Thien” means “heaven”, “Mu” means "an old woman"). 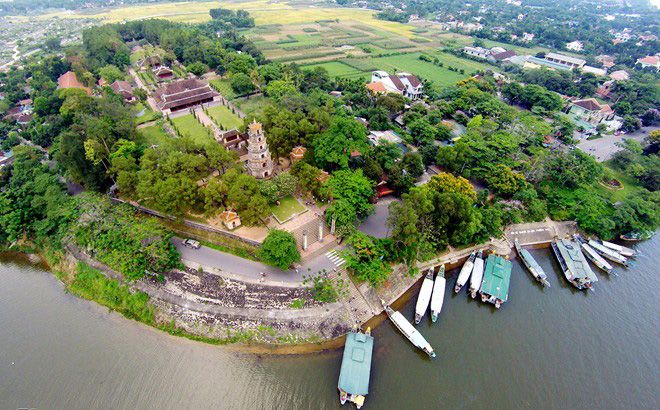 In 1862, under the reign of King Tu Duc, the king wanted to have a child, but he was afraid that the word "Thien” would offend the gods, which caused him to change the name "Thien Mu" to "Linh Mu" - which means the “Sacred Midwife”. Until 1869, the pagoda was called by both “Thien Mu” and “Linh Mu”.

With more than 400 years of history, Thien Mu is the oldest pagoda in Hue.

The architecture of Thien Mu pagoda

Since its construction, Thien Mu pagoda has been renovated many times. In about 1788 (in the Tay Son Dynasty), it was used as a place to perform rituals. In 1844, King Thieu Tri redesigned the pagoda with a larger scale, such as building the octagonal Tu Nhan tower (later called “Phuoc Duyen”) and Huong Nguyen communal house, as well as erecting two stelea recording the construction of these works, coupled with some poems of the king about this place.

The pagoda is located on a hill running in the north-south direction like a turtle, surrounded by a citadel constructed of stone and brick. The pagoda consists of a number of works such as Tam Quan gate, Phuoc Duyen tower, Dai Hung palace, etc. 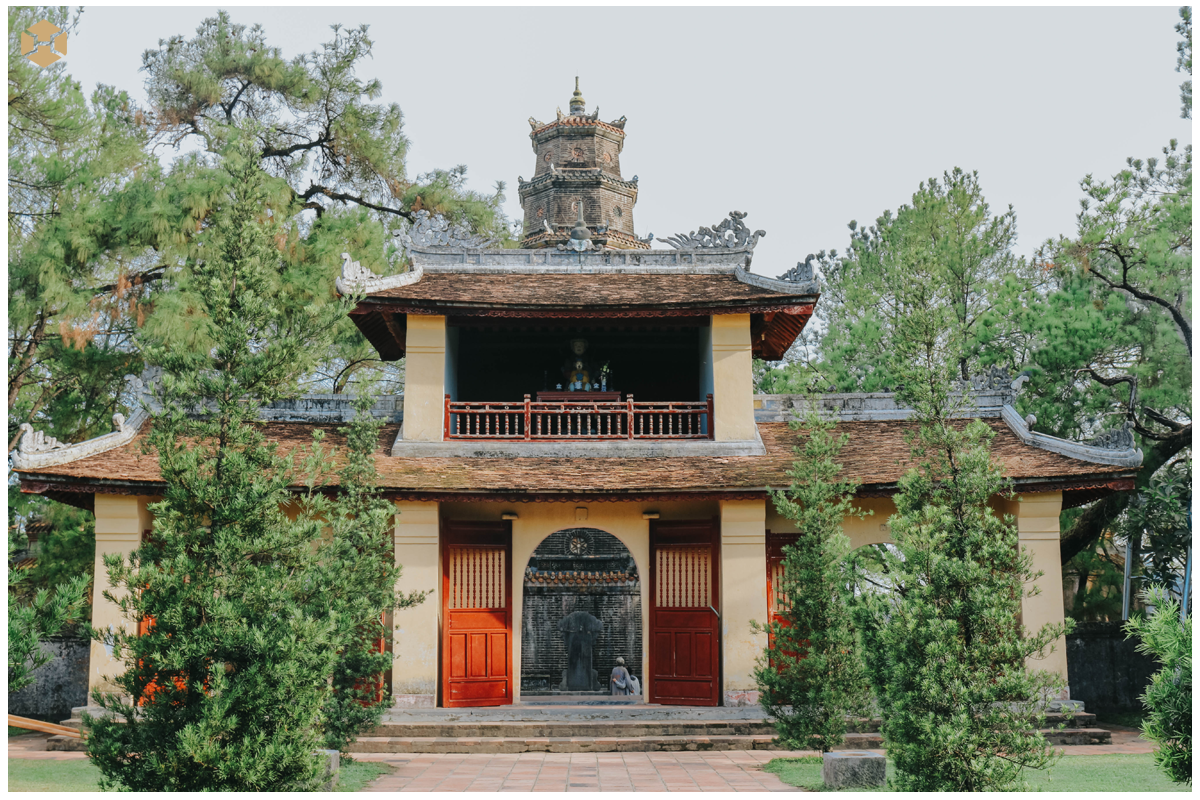 This is a unique work which can be considered the symbol of Thien Mu Pagoda, was built in 1844 with a height of 21m with seven floors. As soon as you set foot on the pagoda campus, the tower appears majestic and ancient, whose inside are spiral stairs. The image of the majestic tower on a bank of the charming Huong River has captivated many visitors. 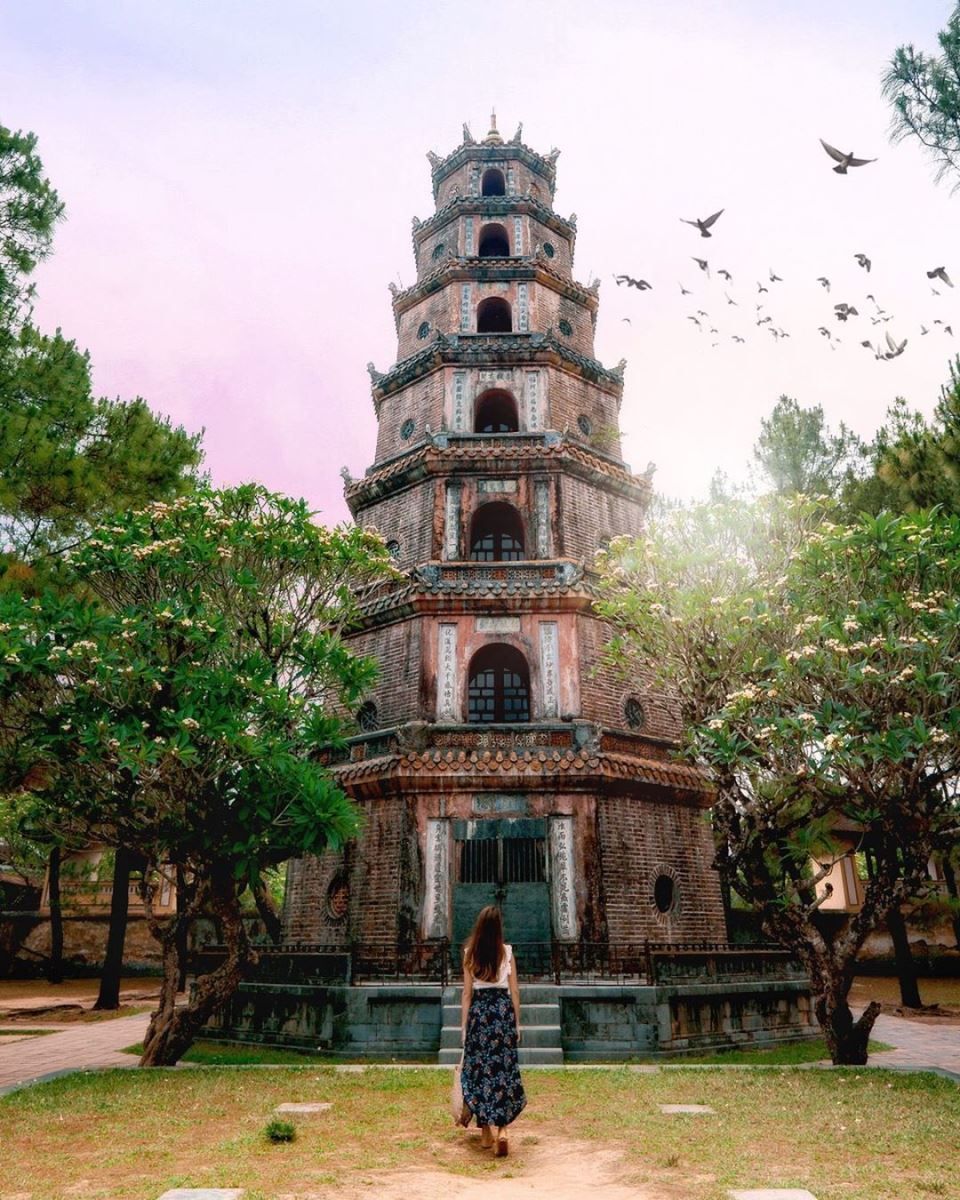 The tower has become the symbol of the pagoda. Photo: cattour.vn 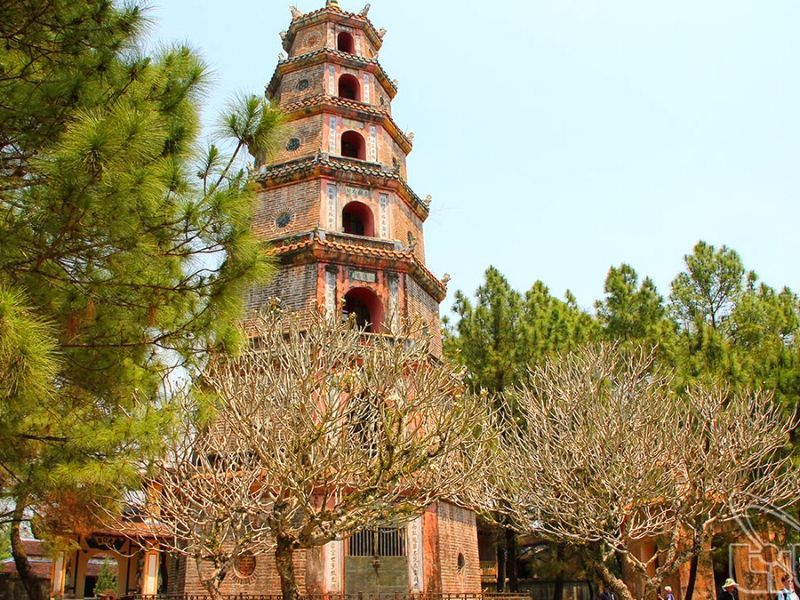 Next to Phuoc Duyen tower, there is a big bell cast from the reign of Lord Nguyen Phuc Chu (in the year of the Tiger - 1710), with a weight of 2,025kg, a height of 2.5m and a diameter of 1.4m. On the surface of the bell, eight words of “Tho” are engraved based on the style of letters on a seal, while its body is divided into 4 parts with the writings of Lord Nguyen Phuc Chu, and on the lower part of the bell are carved bagua and patterns of waves. Legend has it that, on Buddha's birthday, the Lord decided to cast a bell in the presence of hundreds of Buddhists who came to lead a religious life. They dropped into the cauldron of boiling copper a lot of valuable assets with their eternal belief, so this bell has great spiritual value. According to the Hue Museum of Royal Antiquities (under the control of Hue Monuments Conservation Centre), this bell is one of the oldest pagoda bells and has been recognized as a national treasure since 2013. 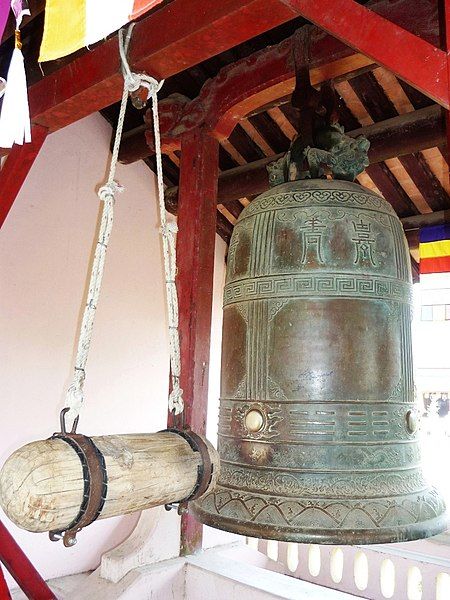 Dai Hung Palace is the main hall of Thien Mu Pagoda with the architecture of “trung thiem diep oc” (the architecture of a double house with two roofs on one foundation). After the restoration in 1959, the palace’s trusses and pillars were rebuilt with concrete covered with a layer of paint that looks like wood. This is the place to worship Maitreya Buddha with big ears (to listen to the sufferings of human beings) and a tolerant smile (to forgive people's mistakes). 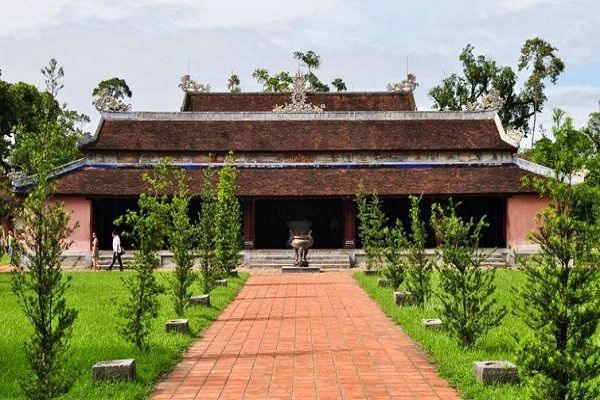 In the middle of the hall are Buddhas of Three Realms, while Manjushri Bodhisattva and Universal Worthy Bodhisattva are on both sides. Inside the palace, there is a horizontal lacquered board written by Lord Nguyen Phuc Chu in 1714 and a large bronze “khanh” (a special type of bell) carved with the images of sun and moon, which is very impressive.

Guanyin Palace is located at the end of Thien Mu campus with relatively simple architecture, yet surrounded by green forests, creating a feeling of tranquility and sacredness. In the palace is a statue of Guanyin Bodhisattva made of bronze sitting on a lotus with a gentle face expression. On both sides of the palace, there are 10 statues of gods who are said to govern Hell as perceived by the Oriental tradition, which makes the atmosphere in the palace more majestic and solemn than those of other works. 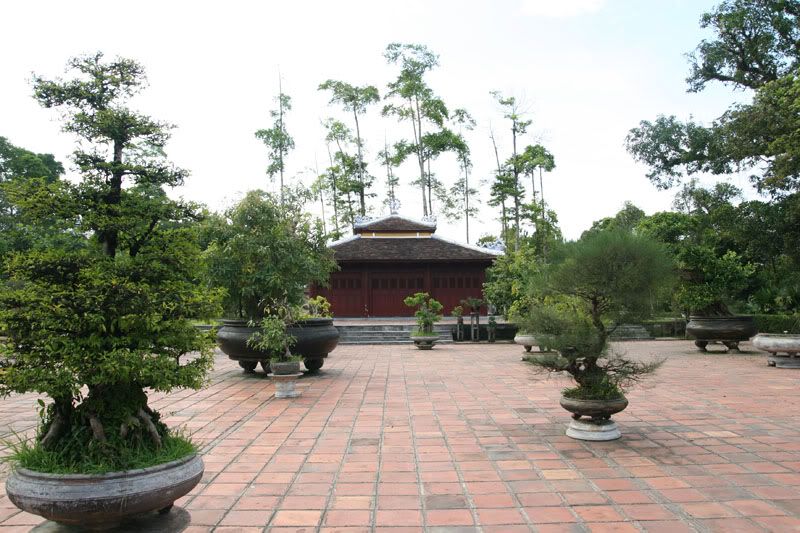 The large yard has many ornamental plants. Photo: huesmiletravel

The antique display area of the “immortal” Austin car

This area attracts many tourists as it is associated with a legend of Venerable Thich Quang Duc. In 1963, after getting out of this car, he burned himself to death to protest the government's policy of suppressing Buddhism of the Ngo Dinh Diem regime. Today, this car is still being preserved and displayed at Thien Mu pagoda. Over hundreds of years, this relic is quite old and its paint color has faded a lot, but its ancient features and meaning still exist. 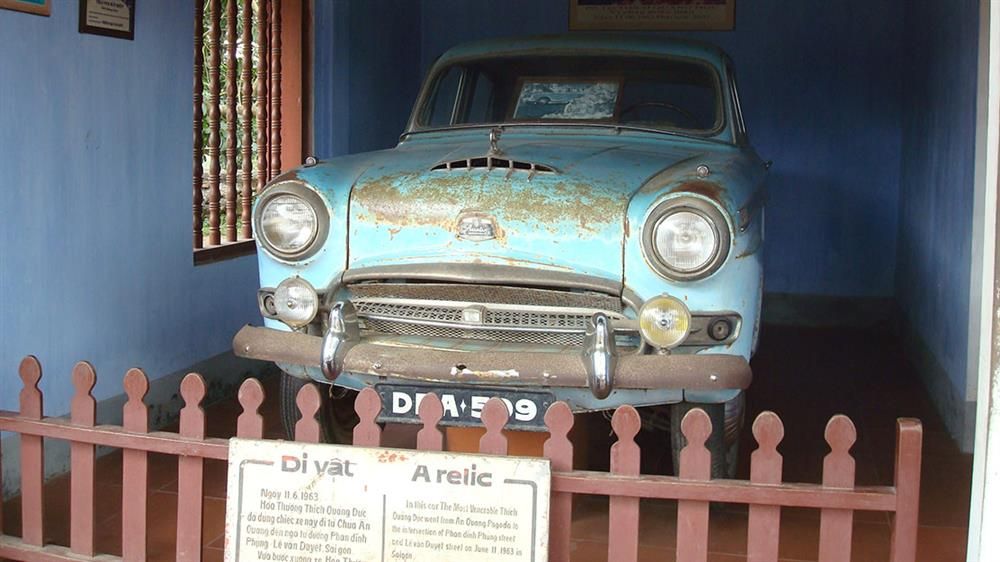 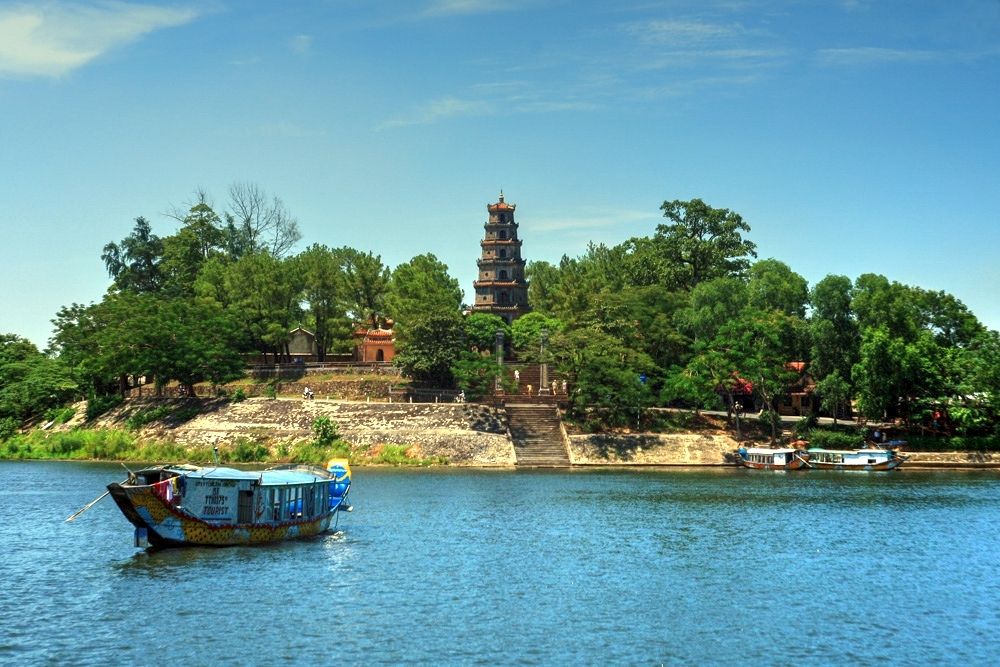 Not only does Thien Mu pagoda attract visitors with its ancient architecture, it also captivates many people thanks to its peaceful beauty. From a distance, the whole pagoda looks like a giant turtle carrying an ancient tower on its back. It is not an exaggeration to say that Thien Mu Pagoda has a poetic space - with a gentle river, trees, flowers and sounds from the bell that can make you think of a fairyland - which is also the reason as to why this pagoda has become the inspiration for many poems and songs. 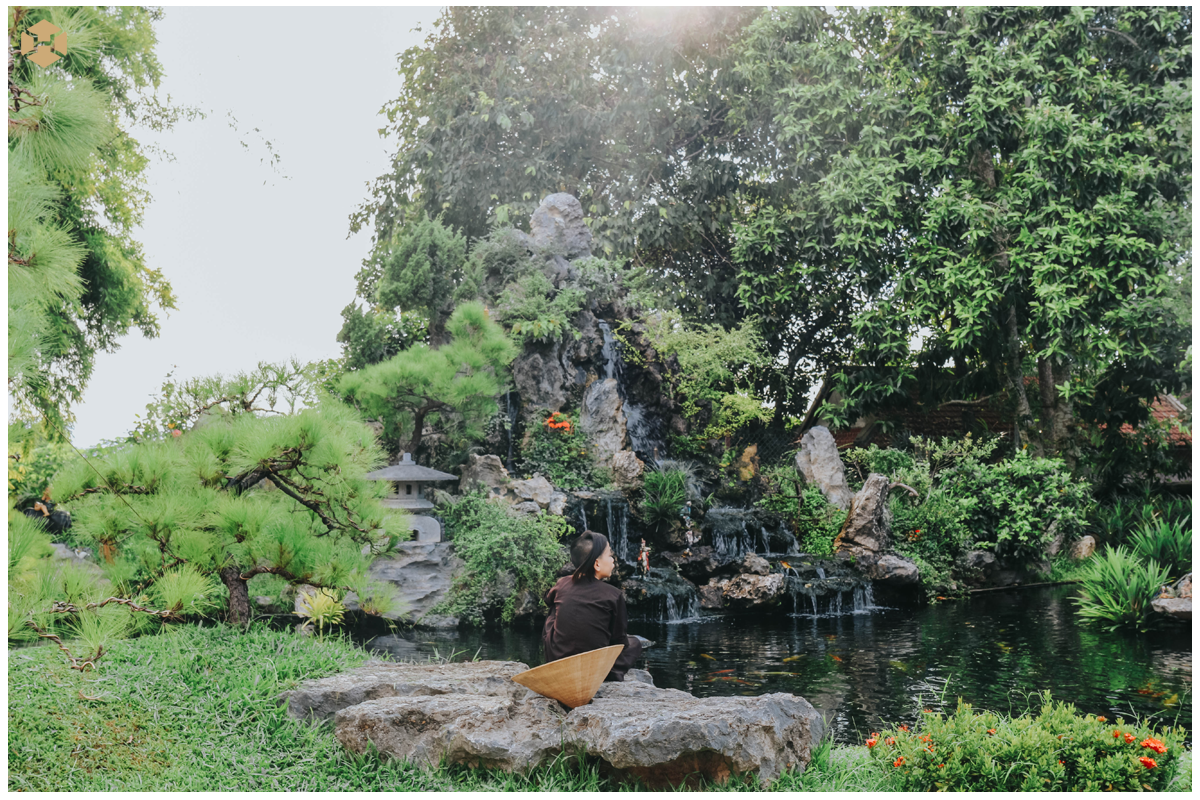 The green campus of the pagoda. Photo: huongriver 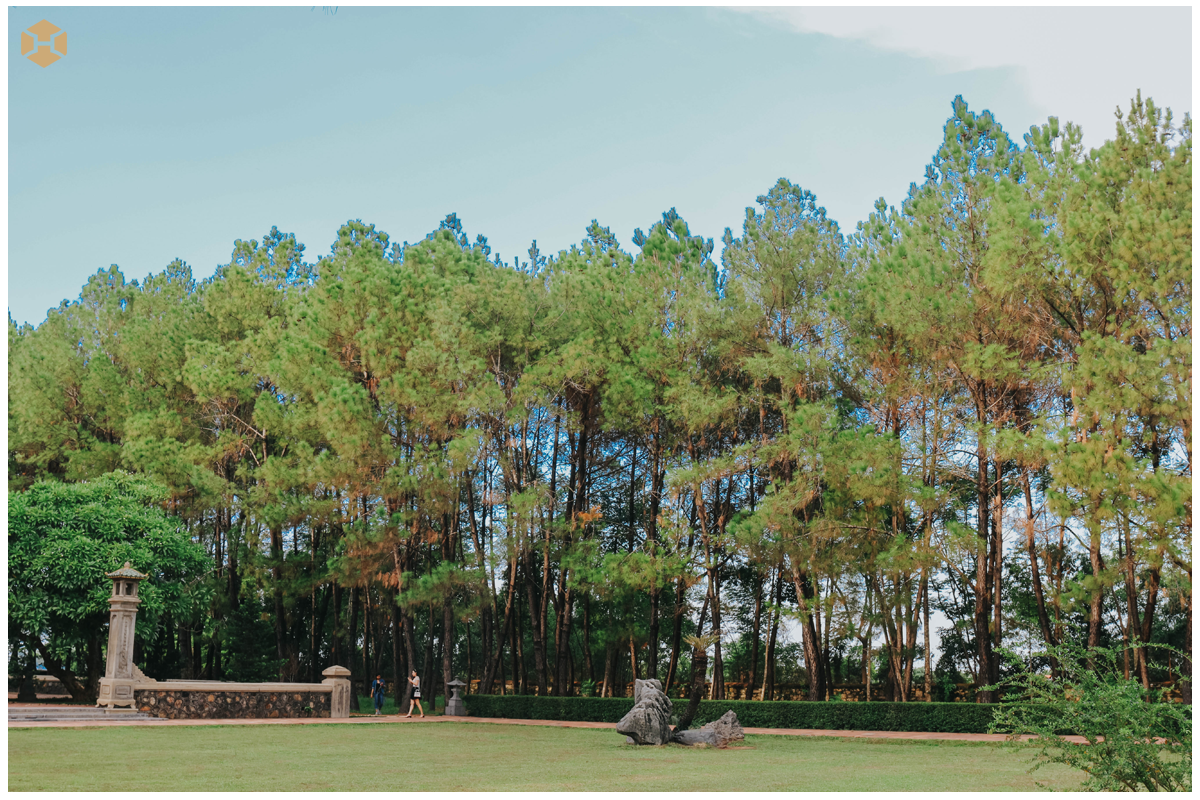 Being lost in a fairyland. Photo: huongriver

Some notes when you visit Thien Mu pagoda 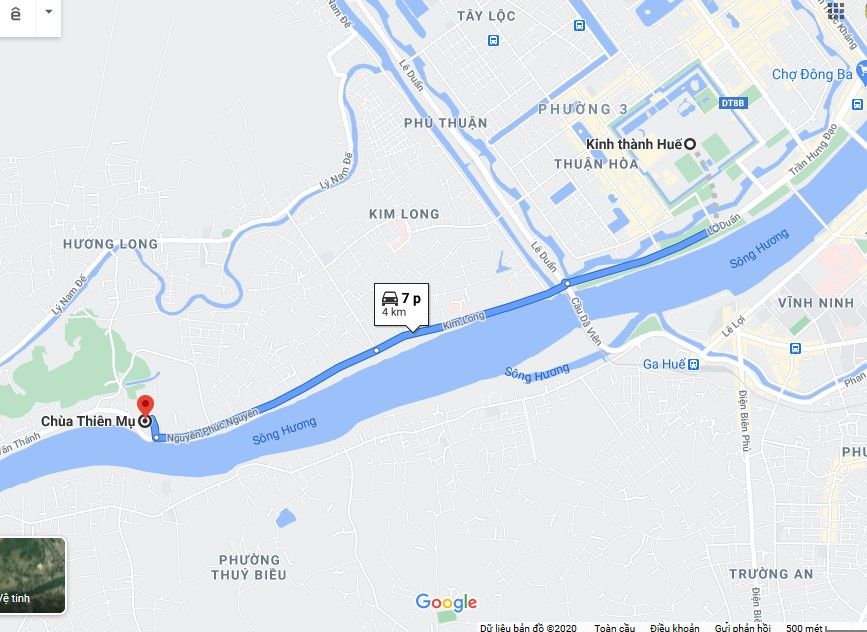 Guide to travel from Hue Citadel to Thien Mu Pagoda

The distance from Hue city center to Thien Mu pagoda is about 5km. From Hue Citadel, you can follow Dang Thai Than street, then turn left to Yet Kieu street. Next, you can turn left through Le Duan street and then come to Kim Long Street. Finally, travel a distance of about 2km and you will see Thien Mu Pagoda by the peaceful Huong River.

Hue weather is best around January and February with the cool and pleasant atmosphere, creating favorable conditions for you to sightsee and discover the pagoda. Otherwise, you can come here in May or June to admire the beauty of the pagoda in the flamboyant season. 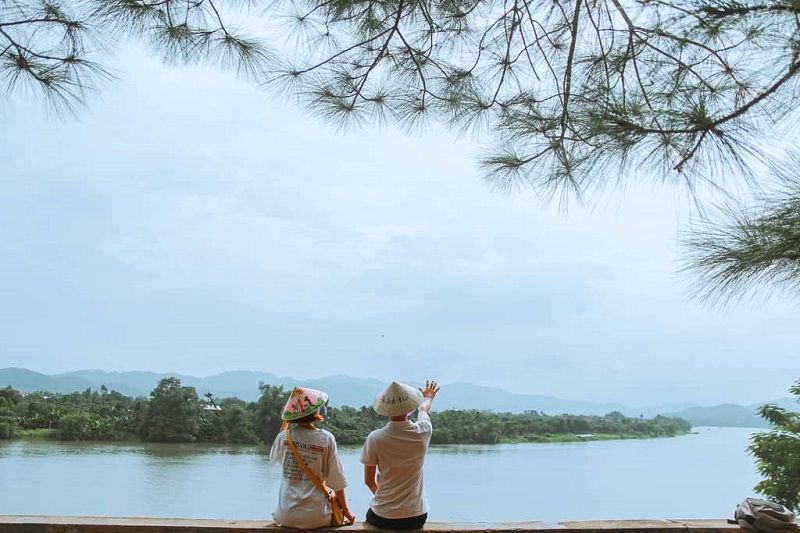 Thien Mu Pagoda is known as the most sacred ancient pagoda in Hue, so you should choose polite and proper clothes, while trying to remain quiet during your time there.

Coming to Hue without visiting Thien Mu Pagoda would be a pity. You should spend some time stopping by here to immerse yourself in the fresh nature and find peace of mind in the midst of a sacred space.