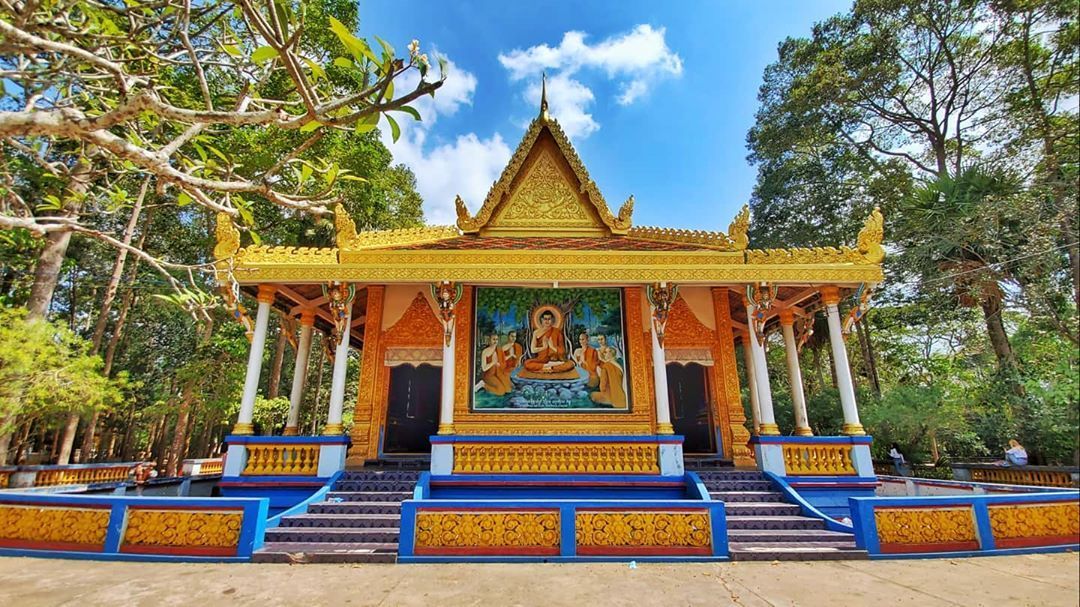 Soc Trang is one of the lands for those who love to explore Southwest Vietnam due to its famous scenic spots as well as cultural values in works such as Doi Pagoda or Khmer Museum. 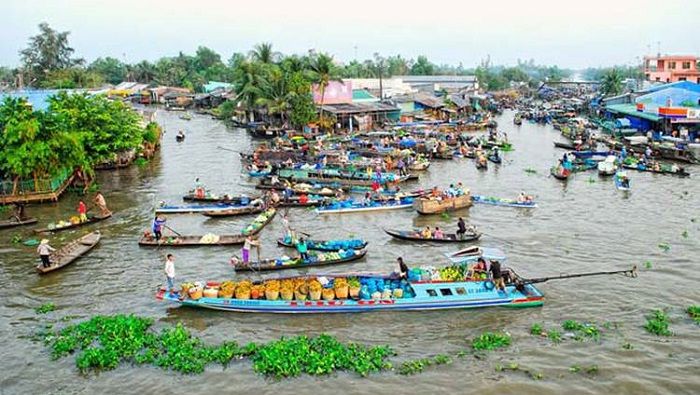 Nga Nam is a floating market in Ward 1, Nga Nam Town, which is about 60km from Soc Trang City. Notably, the market is at the intersection of five rivers going in five directions, namely Ca Mau, Vinh Quoi, Long My, Thanh Tri, and Phung Hiep - which is a special feature as compared to other floating markets. The name “Nga Nam” has existed since the French constructed the Quan Lo - Phung Hiep canal.

Nga Nam is one of the oldest floating markets in Southwest Vietnam, which is open from 3am - 4am, busiest at 5am - 6am, and usually ends at 8am. Before the Lunar New Year, it often remains open from morning to night with a bustling atmosphere. 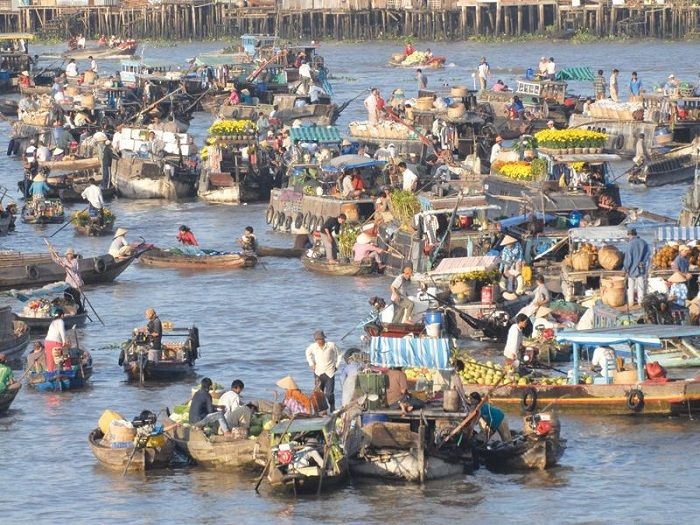 A bustling scene at the market. Photo: dulichvietnam

There is a wide range of items displayed at the market, such as agricultural products, seafood, household appliances, necessities, etc. To advertise the products and draw customers’ attention, the sellers often hang these products on a bamboo pole in front of their boat, so you can easily catch sight of poles full of items such as onions or oranges. This is a unique form of marketing that is only available in floodplains. 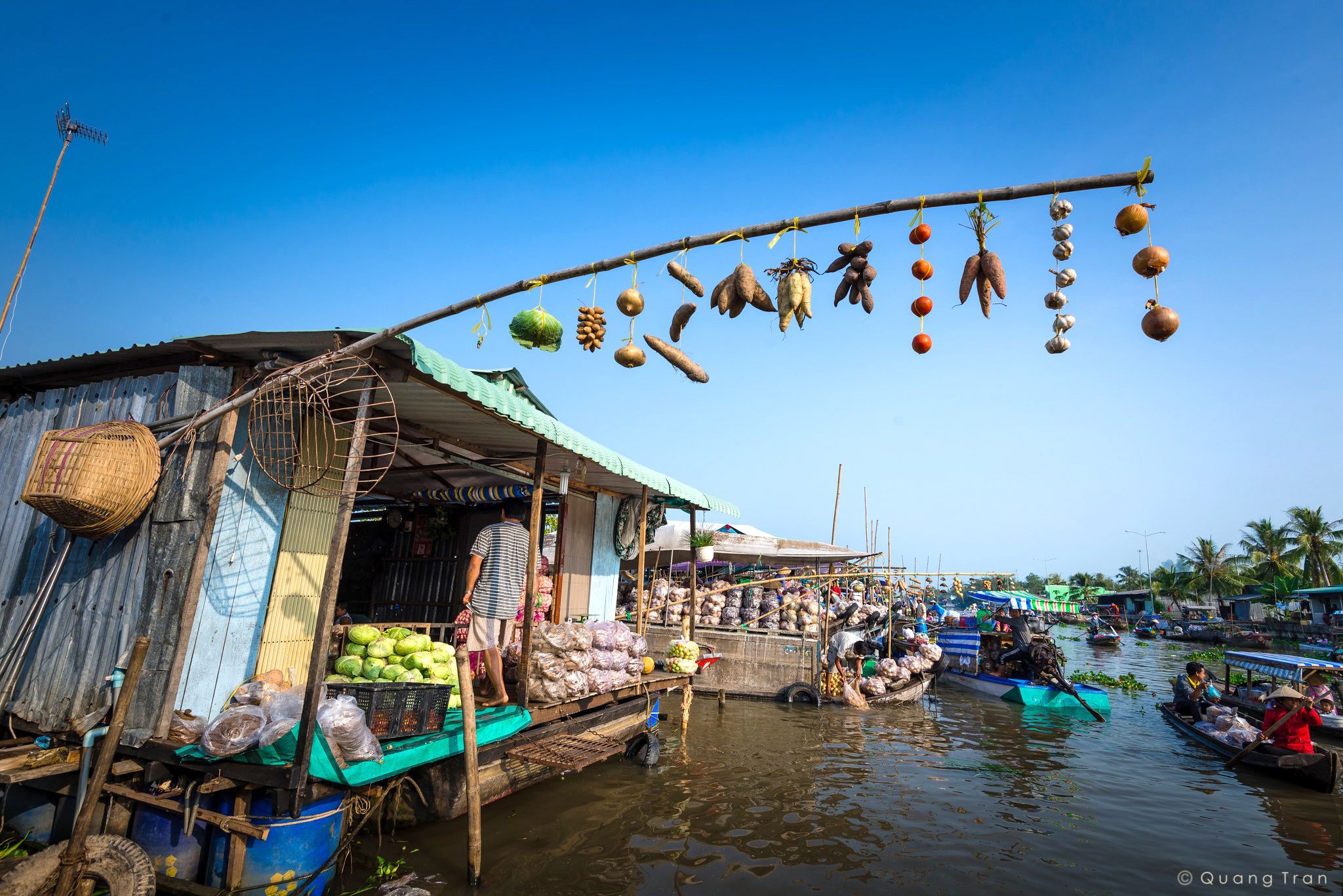 The bamboo pole is a unique form of marketing in Southwest Vietnam. Photo: Quang Tran

When coming to Nga Nam, you will be surprised at the vibrant, bustling and colourful picture of the floating market: from fruits and vegetables to the colours of “Ba Ba” shirts (a traditional southern Vietnamese garment). The sounds of sellers, buyers and oars create a joyful and bustling scene that is not likely to be found anywhere else. In addition, when coming here, you will be able to enjoy many typical regional dishes such as noodle soup, “Hu Tieu” and broken rice. 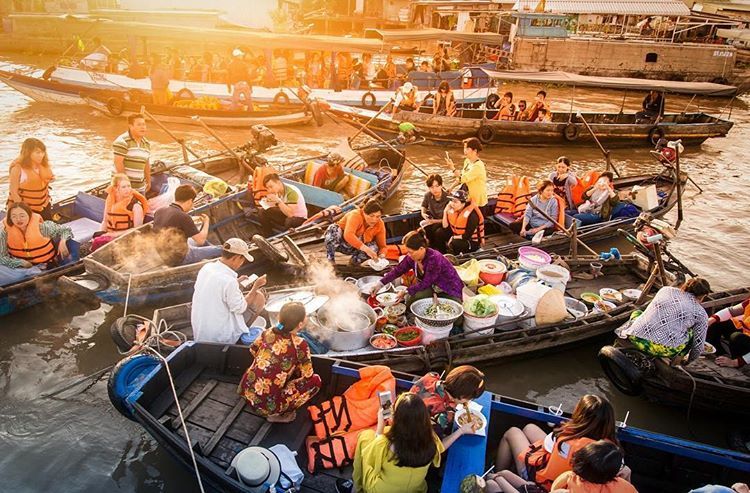 Doi Pagoda, also known as Ma Toc, is located at 73B Le Hong Phong Street (Ward 3, Soc Trang), which is a famous Cham Pa pagoda of the Khmer people in this province. As there are a lot of bats around the pagoda, it was named “Doi” (“Doi” means “bat” in Vietnamese). Another alternative name of the pagoda is  “Serây tê chô Mahatup”. It is noted that in Khmer language, “Mahatup” means “a strong resistance”. Legend has it that there used to be a fierce battle of the peasants against feudalism. After that battle, they returned to their hometown and perceived that it was a land of luck, so they built a pagoda to worship Buddha. 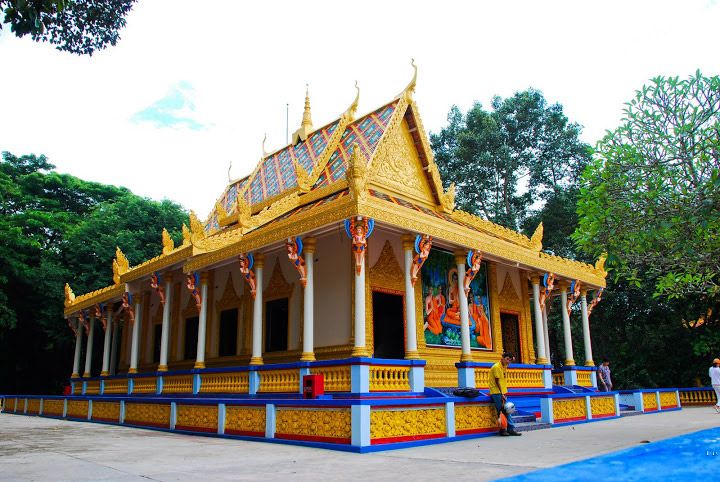 Doi Pagoda is the “convergence” of thousands of bats every night. Photo: yong.vn 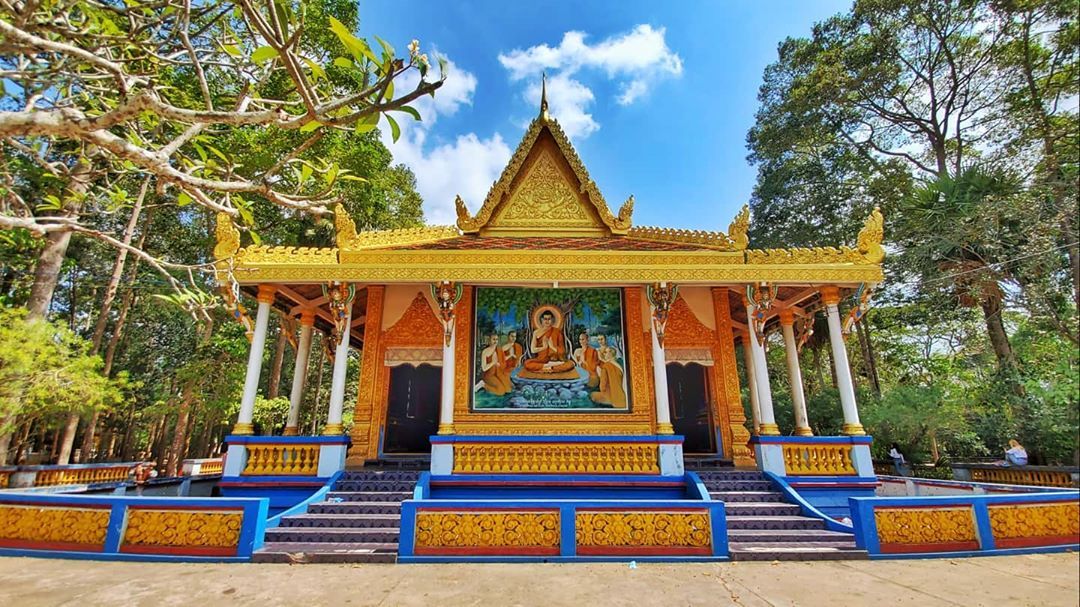 Doi Pagoda features Khmer architecture with small towers on the roof of the temple and Naga snakes carved on the facade - the symbol of prosperity and connection between the human realm and nirvana of Hinduism. Under the roof, there are many statues of goddess Kâyno, which is also a typical characteristic of Khmer’s pagoda architecture. 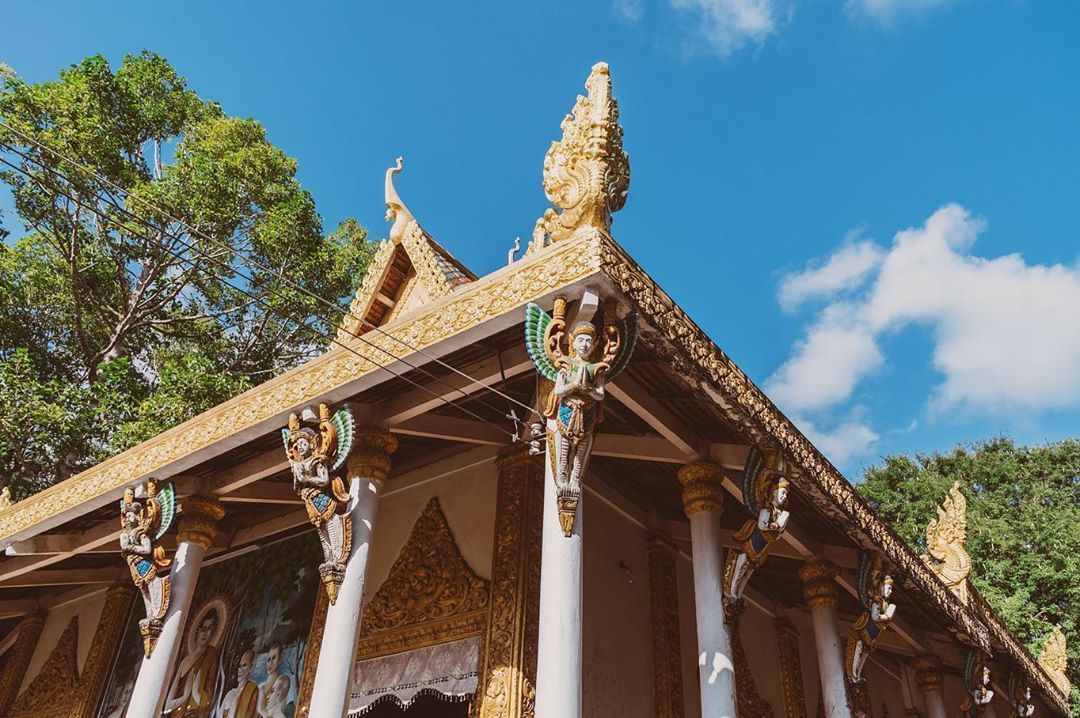 The special thing here is the scene of thousands of bats hanging on the tree branches around the pagoda. Although there are many peaceful pagodas in Soc Trang with shady gardens, only in Doi Pagoda can you see this scene with rare species of pteropus. At sunset, the atmosphere here is bustling due to the noisy sound of bats flapping while calling others to go foraging, which can make you curious. 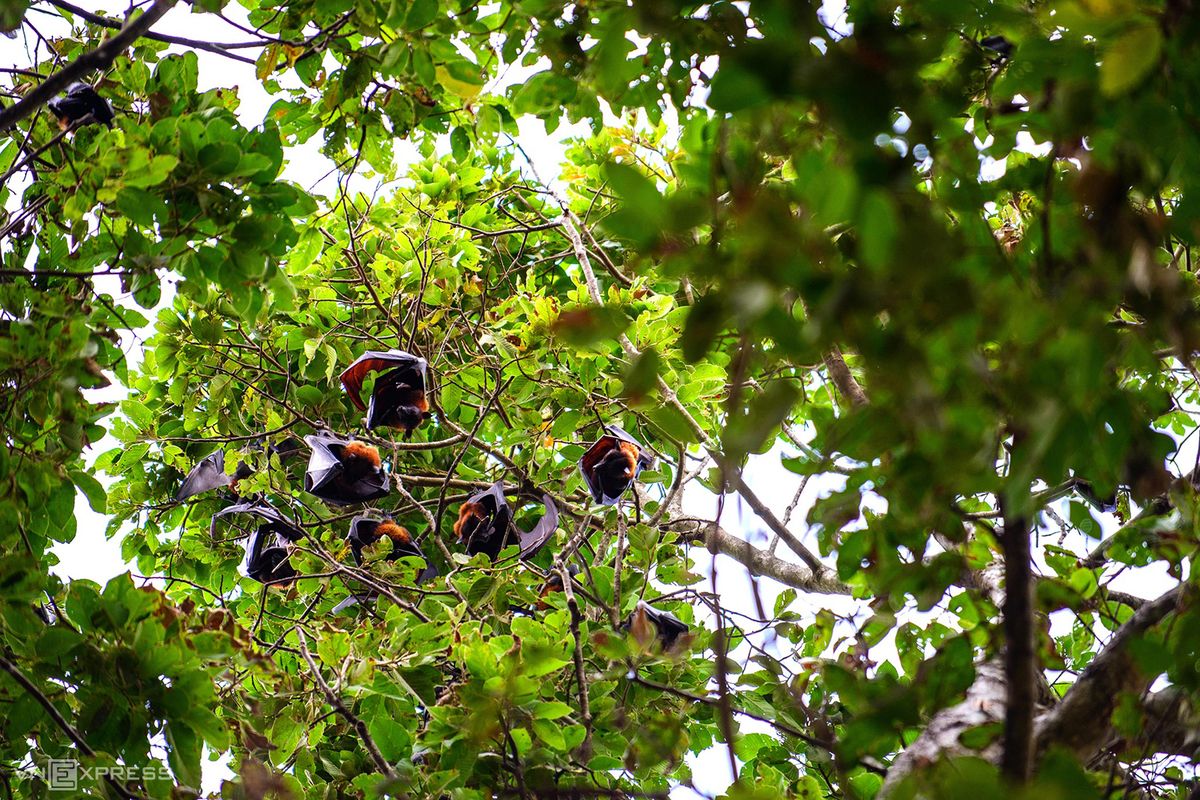 Around the pagoda, there are thousands of bats, creating a unique picture. Photo: thamhiemmekong

Khmer Museum is located at 4 Hung Vuong Street, Ward 6, Soc Trang City. Along with the one in Tra Vinh, this is one of the only two museums that preserve the unique cultural features of the Khmer people.

The museum covers a large area of 2,344m2, of which the exhibition area is 368m2 with typical Khmer architecture with pointed and curved roofs. 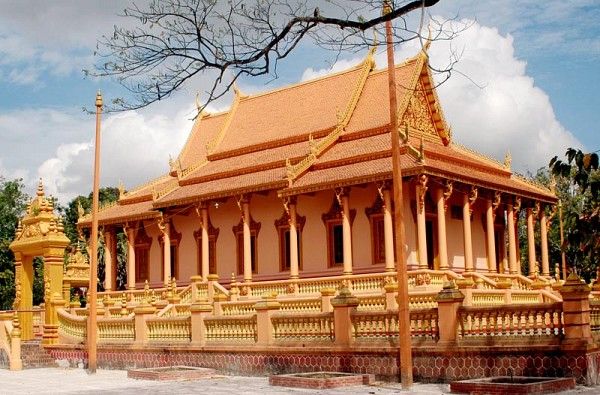 When being in the museum, you will be able to discover interesting things about the ancient Khmer through many unique products on display, such as costumes or musical instruments imbued with the identity of this ethnic group. Currently, this place is exhibiting nearly 500 artifacts, images and documents reflecting the material and cultural life of the Khmer community. 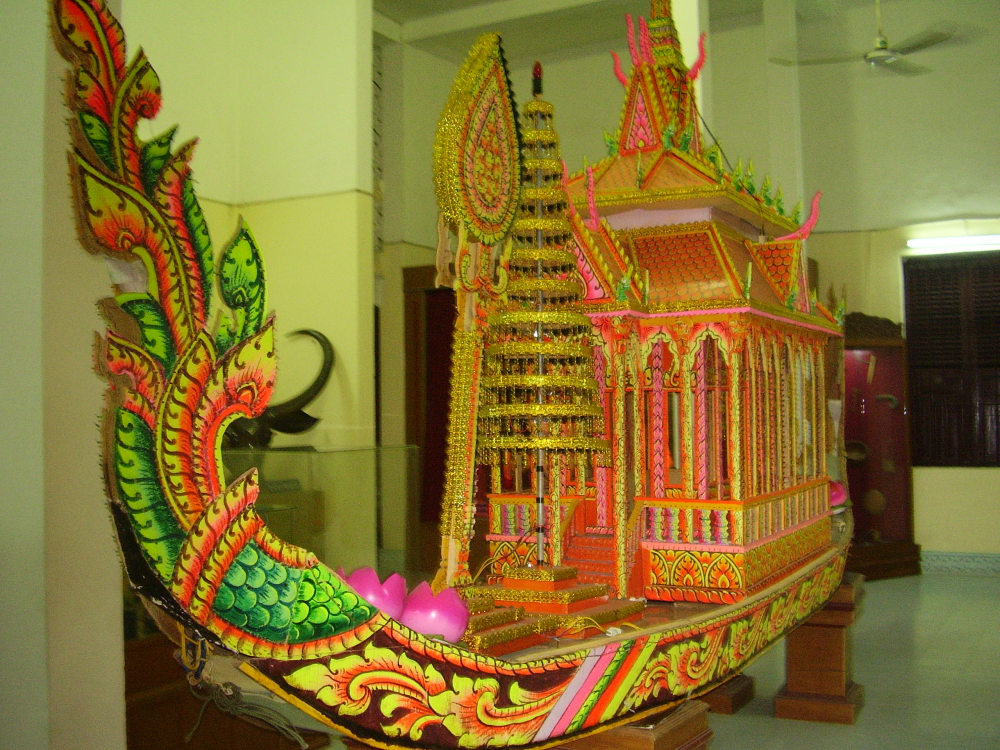 A model of boat racing - an activity in the Khmer folk festival. Photo: tadivui

The stage models of “Rô băm” and “Dù kê”, which are elaborately designed, can help you understand more about the theater art of the Khmer in the South. 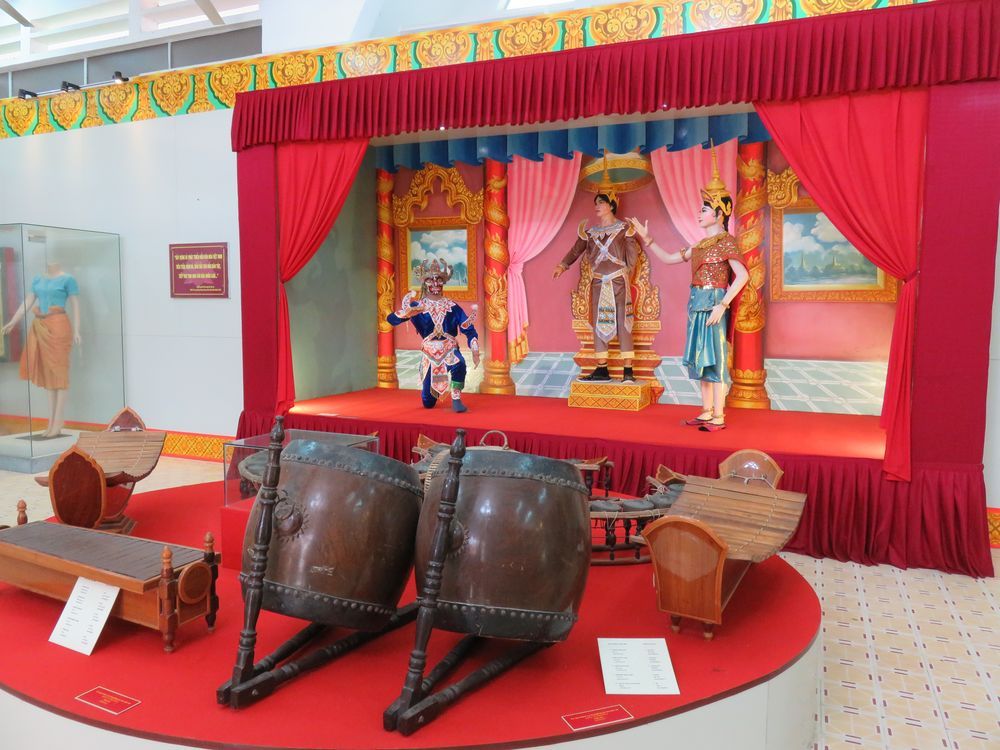 The stage model of “Rô băm” in the museum. Photo: tadivui

Soc Trang is not only famous for the bustling Nga Nam floating market, but it also attracts visitors thanks to the mysterious Doi Pagoda or the Khmer Museum with a variety of artifacts. When coming to this land, do not forget to visit the above-mentioned three places to partly understand the culture and life of the people in Soc Trang.