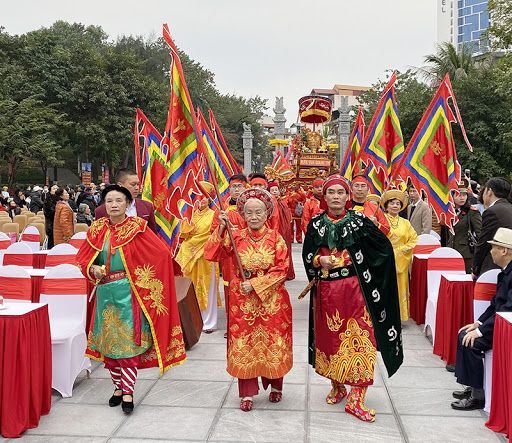 With rich cultural and historical traditions, Vietnam has many unique festivals from the North to the South. There are various outstanding festivals that you should not miss when visiting the S-shaped country.

Lim is a big festival held in Tien Du district, Bac Ninh province. The festival starts from January 12 to 14 (in lunar calendar) every year, and the main day is on January 13. The Lim festival is considered a unique feature of Kinh Bac cultural region. Kinh Bac is the name of an old region in the North of Vietnam, now includes the entire 2 provinces of Bac Giang, Bac Ninh and a small part of neighboring provinces such as Lang Son, Hung Yen, Hanoi and Vinh Phuc. 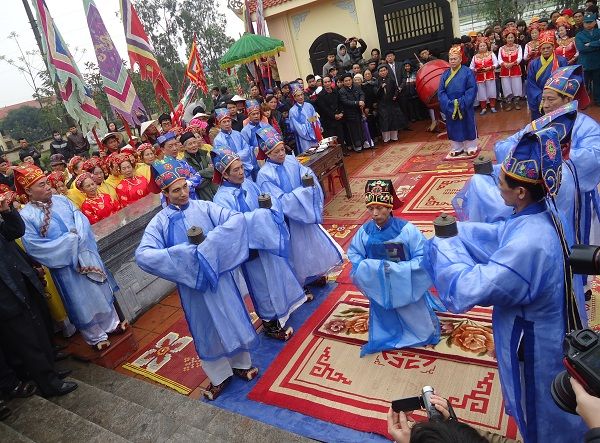 It is said that the Lim festival originates from the singing festival at a pagoda, which is related to Truong Chi - a character in Vietnamese fairy tales with a very beautiful voice. The Lim Festival has a very long-standing history as no one knows the exact time when it was first held. In the past, the festival was only organized within the scale of a commune (Noi Due commune) in the autumn of August with many processions, rituals and folk-art activities such as Trong Quan, Cheo, Tru, Tuong and Quan Ho singing.

In comparison with other festivals, as the Lim festival is held by 6 villages, the procession will be performed in all temples along the Tieu Tuong River. The festival takes place around Lim hill, which belongs to three surrounding localities: Noi Due commune, Lien Bao commune and Lim town. The Lim pagoda on this hill worships Mr. Hieu Trung Hau - the founder of the Quan Ho singing. 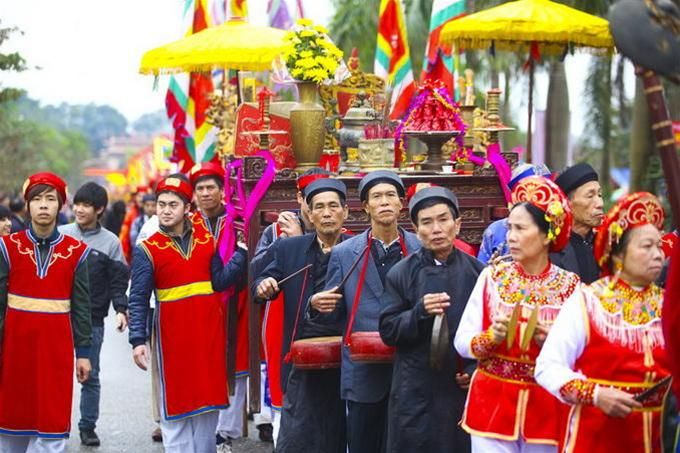 The procession at the Lim festival. Photo: vntrip

The Lim festival usually has 2 parts, namely the ceremony and the festival respectively. The procession is performed with a large number of people in old costumes. The main ceremony takes place on January 13  with rituals for village lords and gods at Co Lung temple, Hong Van mausoleum, Do Nguyen Thuy mausoleum, and Hong An pagoda. Ah. In addition to the ceremony, the Lim festival also has many folk games such as martial arts, wrestling, chess, weaving, rice cooking and so on. Among these, the most special part is the singing festival. 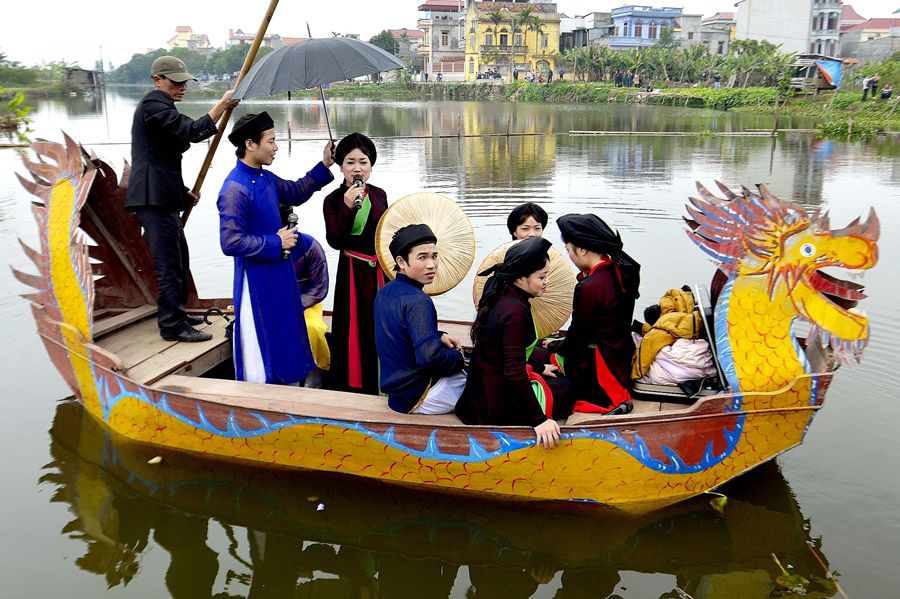 Coming to the festival, you can listen to the romantic Quan Ho songs, which is a typical feature of Kinh Bac region. Legend has it that, when singing Quan Ho to worship the gods, the male and female singers must stand in a row in front of the mausoleum and only sing in a polite voice to praise the merits of the gods.

For many generations, the Lim festival has been considered a symbol of the culture and spirituality of the North of Vietnam. At the same time, it is to commemorate the merits of the predecessors and educate people about traditional beauty.

Tran is a temple complex at Tran Thua Street, Loc Vuong Ward, Nam Dinh City. This is the place to worship the Tran kings and the mandarins who have contributed to the Tran Dynasty. The temple was built in 1695, on the foundation of the old Thai temple that was destroyed by the Ming army in the 15th century. The Tran Temple Festival usually takes place on the 13th, 14th and 15th of January (lunar calendar) every year. 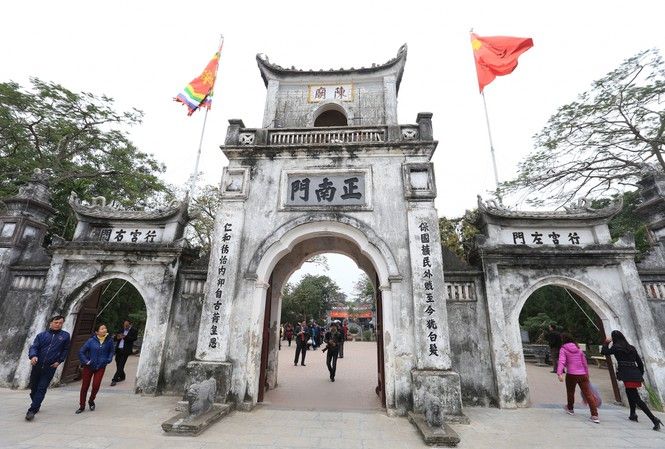 The annual Tran Temple Festival always begins with the “Seal-Opening ceremony” at the right time of the Rat (midnight). The Tran Temple Seal is said to be extremely sacred as it can bring luck and happiness. Therefore, on these days, many people flock here to ask for a piece of yellow paper stamped by the seal. 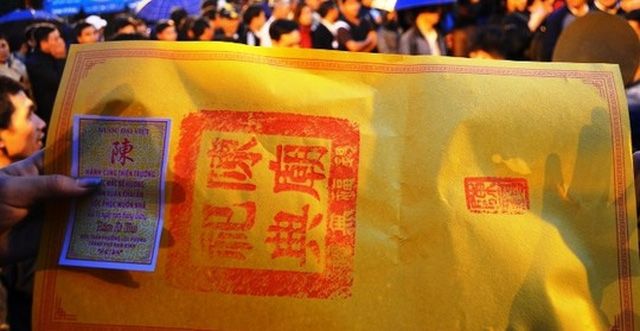 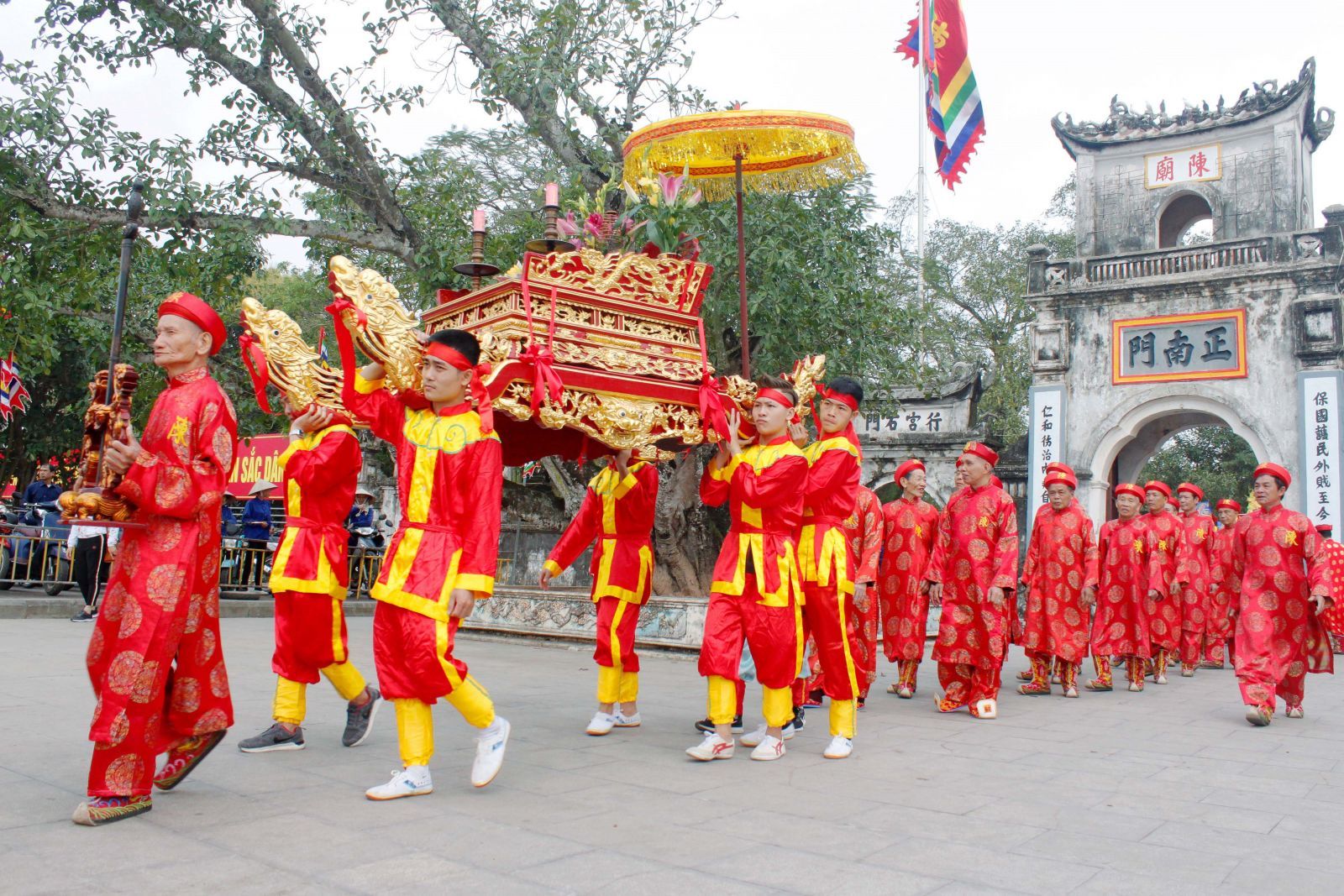 As stamps of the seal are distributed in three main halls, it will be convenient for you to come here to pray and ask for stamps. After the seal-opening ceremony, there will be important rituals of “water procession” and “fish sacrifice”. According to the "Complete Annals of Dai Viet" and other historical documents, the ancestors of the Tran dynasty were originally fishermen. They went down the Red River to Thai Binh and Nam Dinh to find fertile land, and then they dwelled in Tuc Mac village in Thien Truong (now in Nam Dinh province), from which to establish the Tran dynasty with 14 illustrious kings. Therefore, people take water from the Co Well and catch fish in the pond near this well to commemorate the ancestors of the Tran Dynasty. 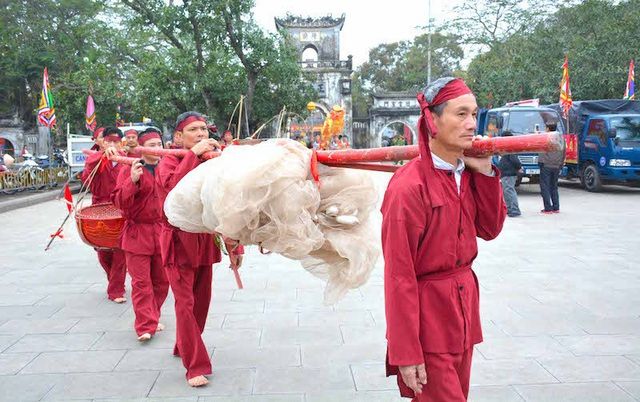 The rituals of water procession and fish sacrifice. Photo: dantri

The festival has many traditional activities such as Cheo Singing, Dragon Dance, Chau Van Singing, Human Chess Competition, Wrestling and so on. 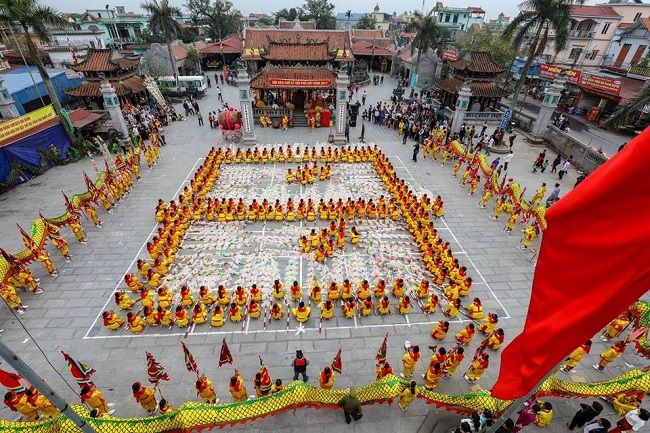 Ba Den scenic area is located in Ninh Son ward, Tay Ninh city, which is about 11km Northwest from the city center. On the mountain, there are many temples, caves, and shrines to worship gods, fairies, saints and Buddhas, in which the main deity is Ba Den - who was ordained as Linh Son Thanh Mau. 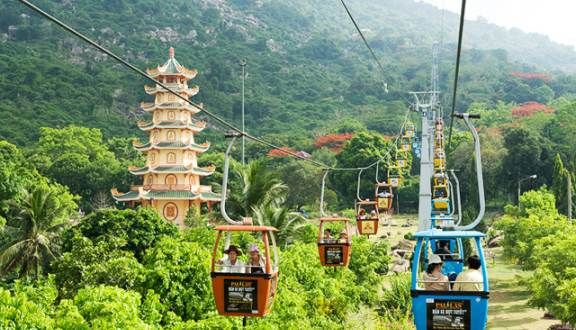 The book "The Legend of the Thanh Mau Phat Ba Tay Ninh" explains the name Ba Den: Once upon a time, there was a beautiful and devout lady asking the monk Trinh Thanh to lead a religious life in the temple, which is halfway up the mountain. Seeing that she was beautiful, the governor of Trang Bang asked her to marry his son. When the two families were preparing for the wedding, she suddenly disappeared. Searching everywhere, people finally discovered a piece of leg that was suspected to be hers. People speculated that she was killed by a tiger. Her family buried her leg and set up a grave for her at the foot of the mountain. The monk called her “Nang Den”, and later people regarded her “Ba Den” to pay respect. 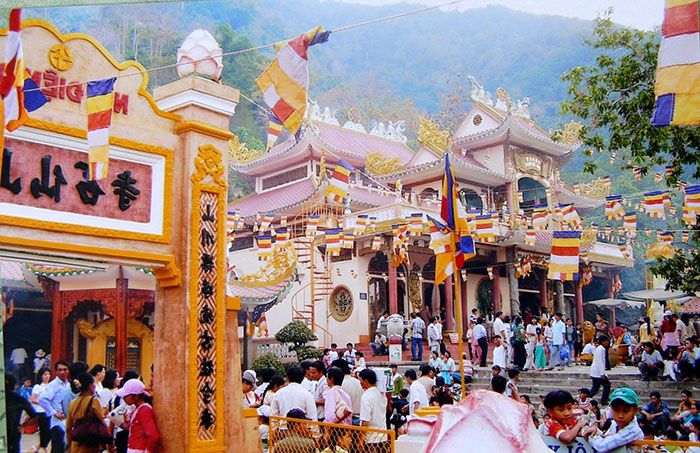 Ba Den Mountain Spring Festival takes place on the 4th day of the Lunar New Year and lasts until the end of January. This is the biggest traditional festival in the South, which starts with the Moc Duc ceremony (bathing statues) performed at 0:00 on the 4th day at the shrine. This ceremony is very dignified, so outsiders are not allowed to attend. The electric doors are all closed, and the candle lights will almost be out. At this time, 6 middle-aged women, including 3 nuns of the temple, will perform the statue bathing. They burn incense, ask Ba Den statue for a bath, and change clothes for Her. Next, they take off the clothes of the statue and bathe Her with scented water made from lotus, jasmine, frangipani flower, cinnamon, and essential oils. Finally, they use clean and dry towels that are impregnated with incense to dry the statue, and then they put a new set of clothes on her. January 5th is the main ceremony with the most important ritual of "Presentation of 10 offerings", including incense, altar lamps, fruits, tea, cakes, and wine. The 6th day of January is dedicated to worshiping the soul, wishing peace and happiness for the people. 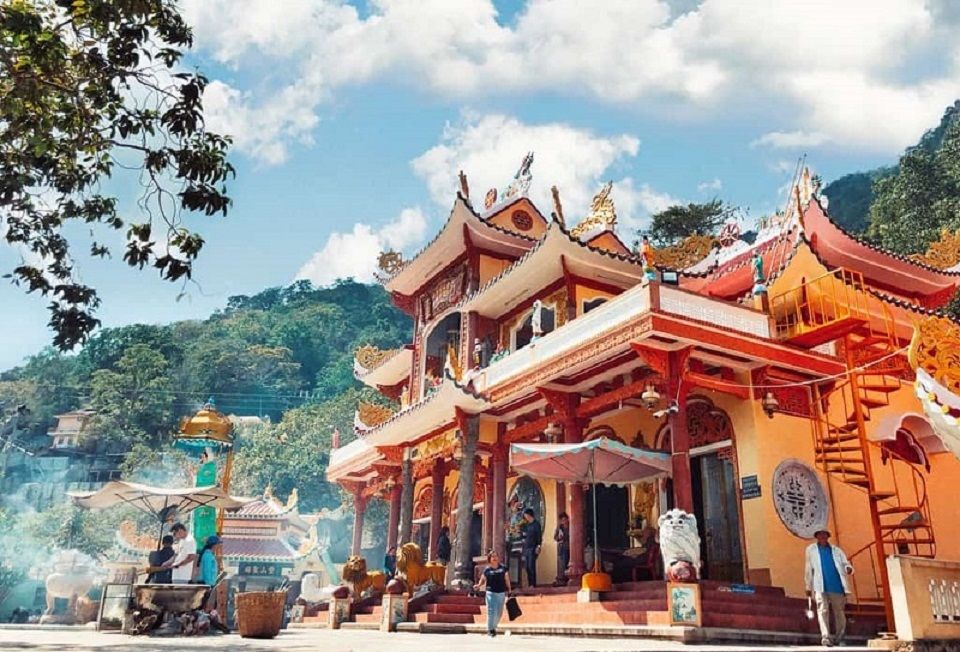 Tourists visiting the pagoda at the beginning of the spring. Photo: Kinhtedothi.vn

Ba Den Pagoda often offers vegetarian food for visitors for free, but you can give the pagoda as much money as you wish. If you want to stay in the pagoda for one or two days for sightseeing, the pagoda will treat you with a hearty reception. 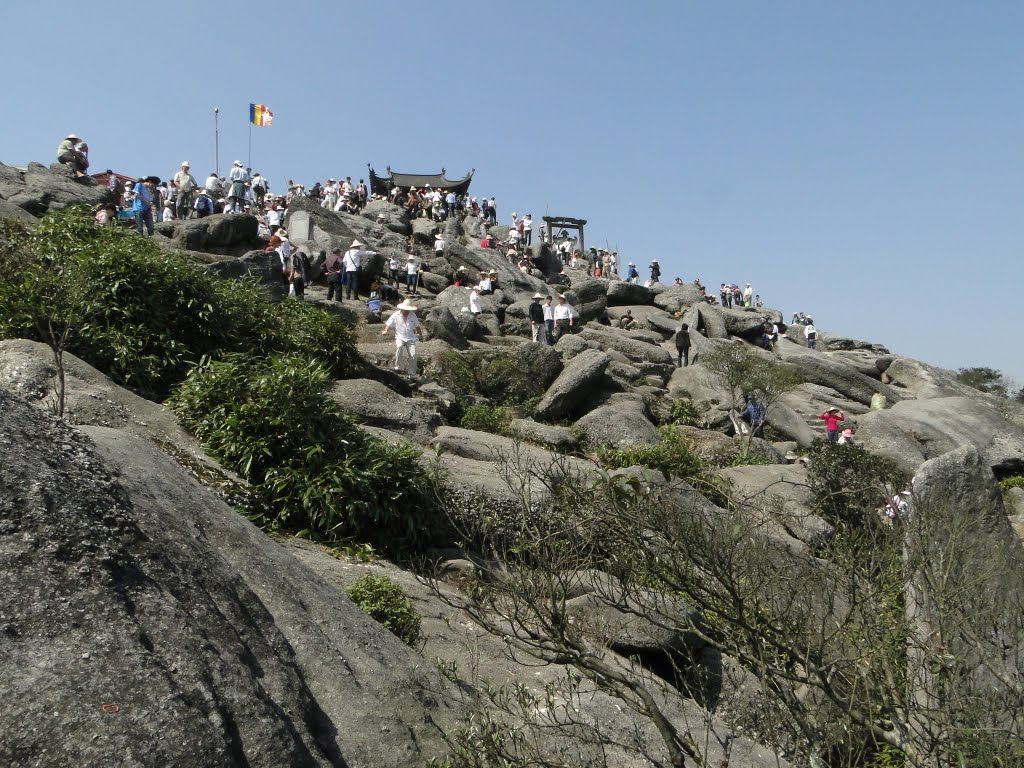 Yen Tu mountain area in Thuong Yen Cong commune is about 14km from the center of Uong Bi town (Quang Ninh). Previously, people regarded Yen Tu as Voi Mountain (Elephant Mountain) as its shape resembles a giant elephant. In some documents, Yen Tu is also known as Bach Van Son (White Cloud Mountain) because it is covered with white clouds all year round. Nearly 1,000 years ago, Yen Tu was considered "the 4th blessed land of Giao Chau", and in the third year of Tu Duc reign, it was mentioned in the list of “famous mountains”, as recorded in the “worship book”. Perhaps it is that sacredness that many Buddhists in Vietnam have come here to build temples to lead a religious life. From the 10th century, Taoist An Ky Sinh (Yen Ky Sinh) came to Yen Tu to do this. In the following years, many generations of monks, nuns and Buddhists continued to come here to lead a religious life and build pagodas, towers and many other works. 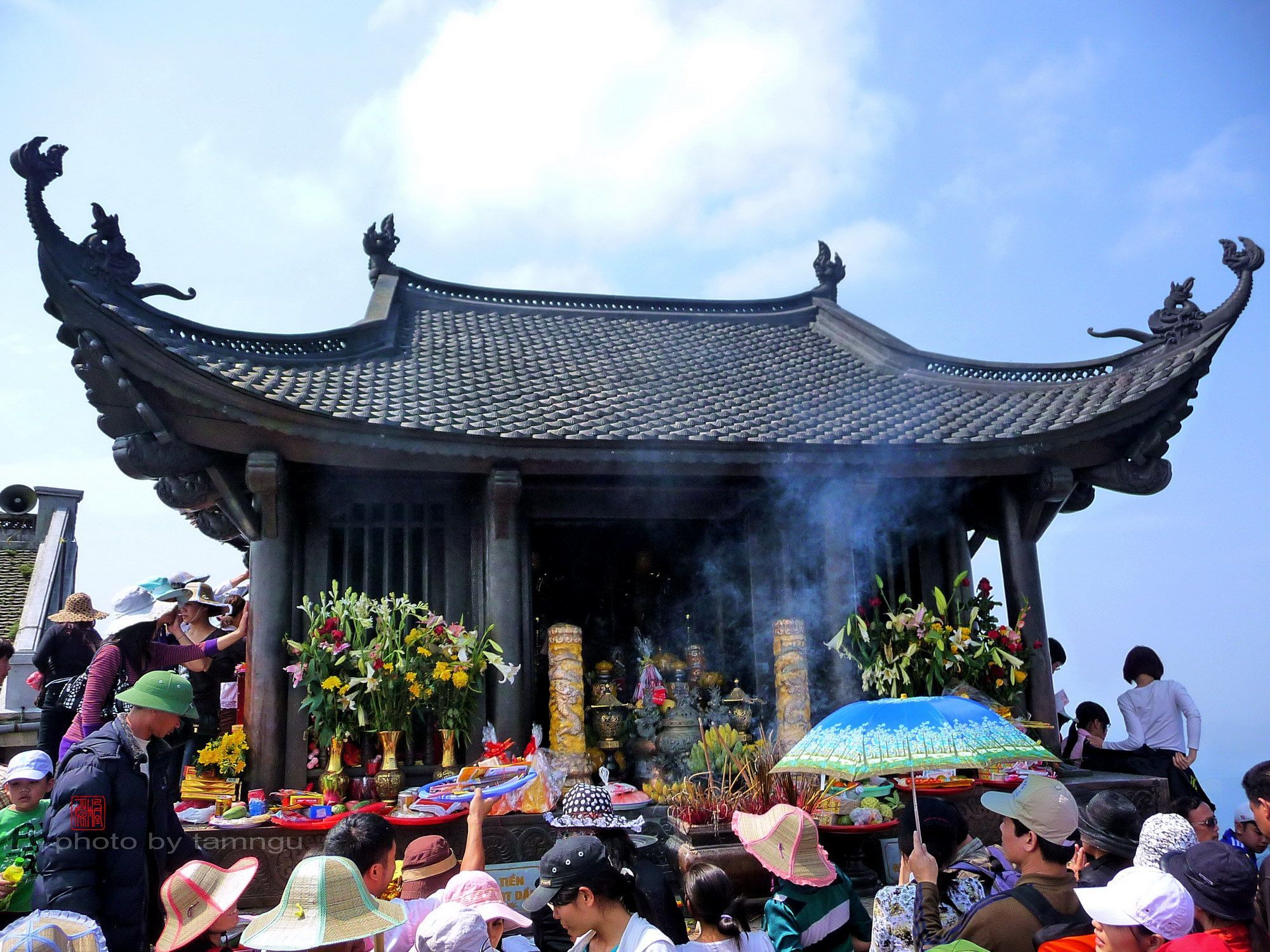 Yen Tu Pagoda Festival is considered as one of the biggest festivals in Vietnam after the Lunar New Year, as it is the major “Buddhist center” of the country. Traditionally, the Yen Tu festival takes place on January 10 with many activities, for example the procession and offering ceremony. Some spiritual rituals performed which can be listed are: beating the drum, ringing the bell, praying for luck and peace, and the Yen Tu sacred sealing ceremony. The festival also includes activities such as: traditional martial arts, folk games, dragon dance, lion dance, and art performances in Truc Lam Yen Tu Cultural Center. 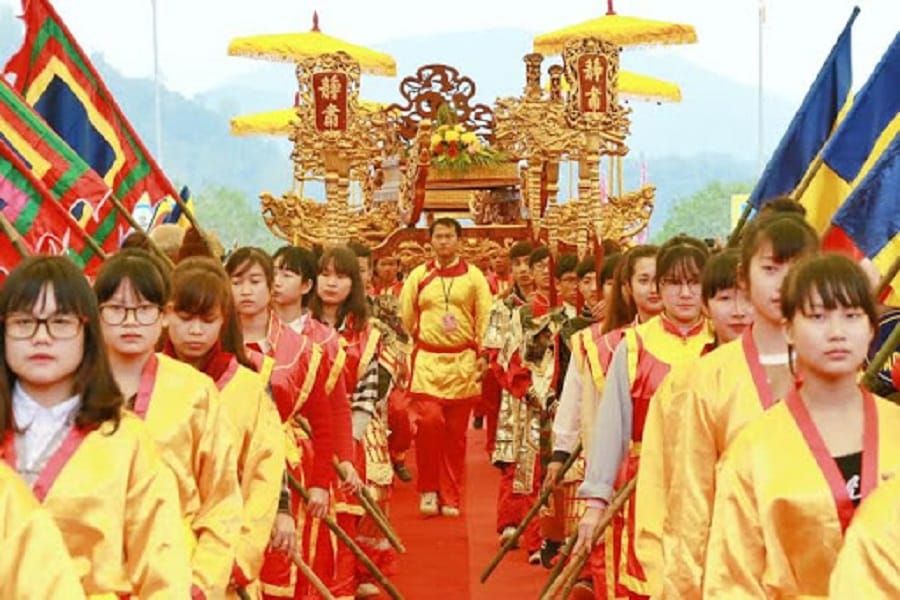 The procession in the Yen Tu festival. Photo: dulichkhatvongviet

Most visitors coming to Yen Tu climb to Dong Pagoda (Thien Truc Tu) at an altitude of 1,068m for incense offering, as it is believed that this place can make their wishes come true.

Dong Da Festival is held at Dong Da mound, Tay Son Street, Quang Trung Ward, Dong Da District, Hanoi City. This is the place where the Tay Son army defeated the Chinese Qing army in the battle of Ngoc Hoi - Dong Da in 1789. This site has a temple called Trung Liet, which was built in the 19th century to commemorate these historical events. 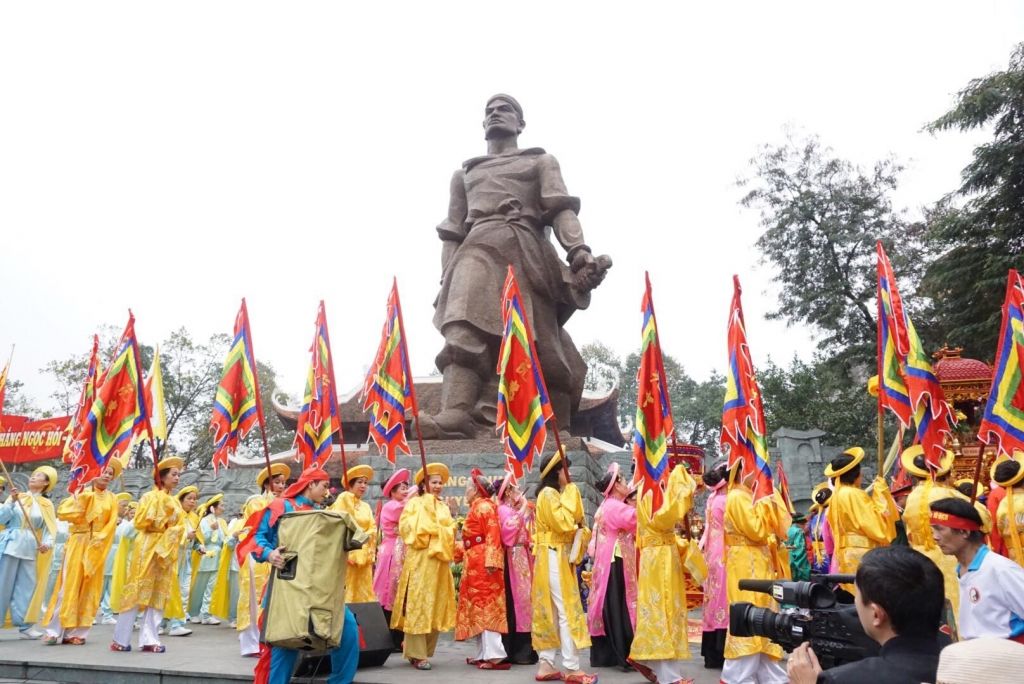 Dong Da Festival is held on two days of January 4 and 5. Photo: suckhoedoisong

Annually, people hold the Dong Da festival to review historical events and also to commemorate the merits of King Quang Trung. This is one of the biggest festivals in the country on the first days of the new year, from the 4th to the 5th day of the first lunar month. During the two days, the door of Khuong Thuong village's communal house is opened from dawn to welcome visitors, and the smoke of incense spreads all over the space. The elders and dignitaries in the village gather in large groups. People will perform a procession until midnight to commemorate the victory of the battle, from Khuong Thuong village communal house to Dong Da mound. Behind the procession is the image of the Fire Dragon. The young wear the same costumes, walk around the procession, and perform the martial arts to recreate the battle in the past. 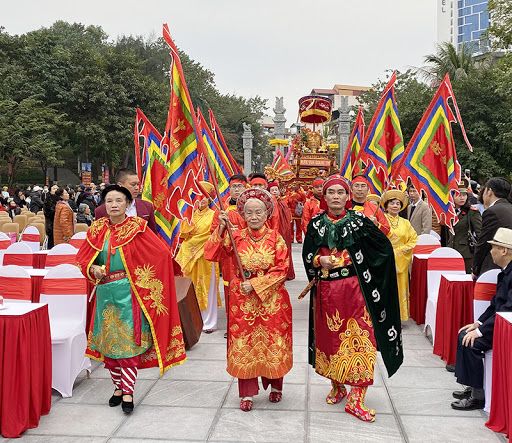 The festival also organizes many other activities such as lion dance, dragon dance, wrestling, human chess, cockfighting, etc., which is an attraction for domestic and foreign tourists.

Folk festivals in Vietnam not only attract domestic but also international tourists because of their unique customs, practices, activities and games featuring national identity.