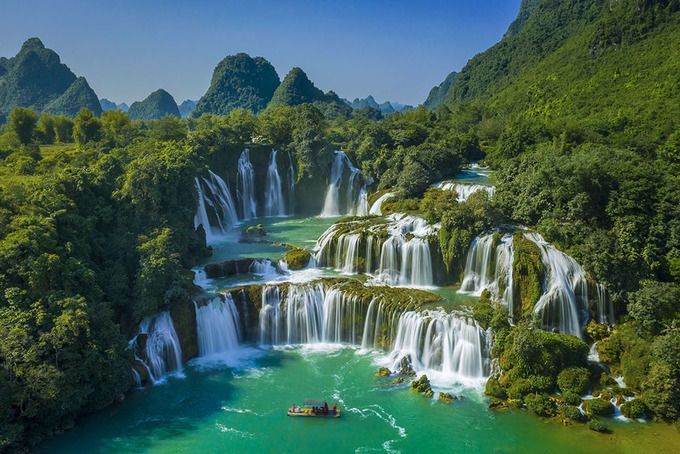 Captivated by Ban Gioc waterfall - the most beautiful waterfall in Vietnam

Located in Cao Bang, Ban Gioc waterfall has long been the destination of many tourists who love to explore unspoiled nature. This is the most beautiful waterfall in Vietnam as well as the largest one in Southeast Asia.

Ban Gioc Waterfall is located in Dam Thuy commune, Trung Khanh district, Cao Bang (about 20 km from the district center). The waterfall is on the Quay Son river, which originates from China, so it is likened to a “natural border” of the two countries. 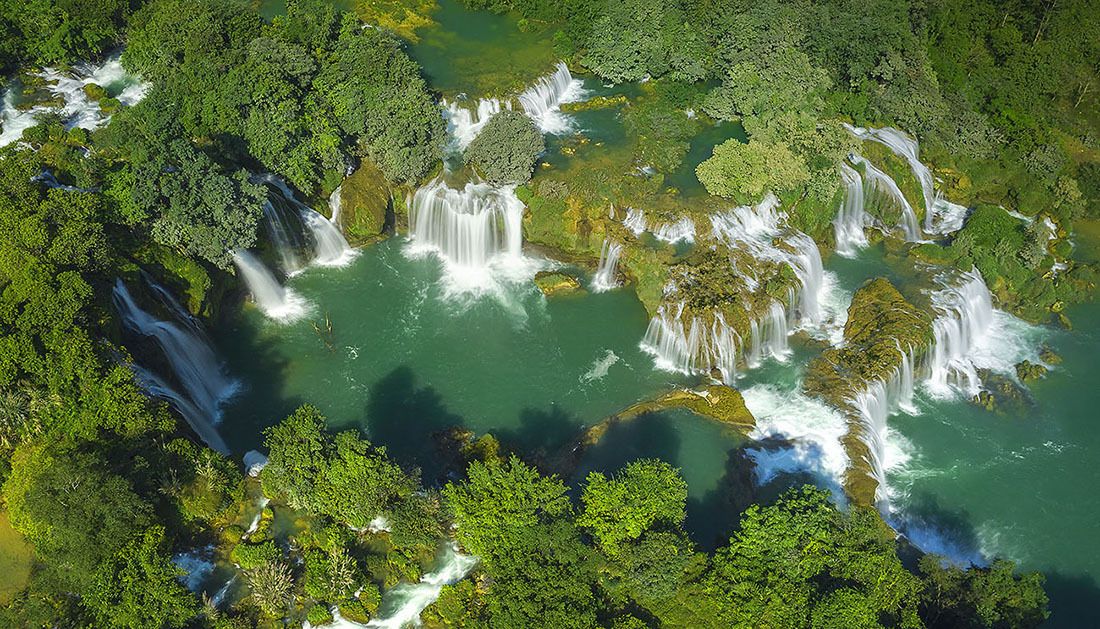 Ban Gioc Waterfall is associated with a touching love story. Legend has it that in the past, kings would select Tay girls to serve them in their palace, as a result of their beauty and various talents. One day, the king allowed his son to travel around the country to find his future wife. When arriving in Trung Khanh, the prince fell in love with the most beautiful Tay girl in the village with long hair, black eyes and smooth white skin, but the girl refused the prince's love as she took an oath to get married with the boy in the neighbouring village. The prince was so angry that he decided to take the Tay girl to the palace and prevent her from meeting her lover. On the way to the palace, her lover put himself in jeopardy to trick the guards and save the girl. The two people ran to a waterfall when it just got dark, so they stopped by the waterfall to rest and gradually fell into a deep sleep due to exhaustion. Immediately after the couple escaped, the village witnessed heavy rain for a week and then a waterfall appeared. Surprisingly, the water at the foot of the waterfall was as clear as crystal, and since then, people have called it “Ban Gioc waterfall”. Specifically, the waterfall in the middle is divided into three floors, of which two floors are close to each other like the pose of a couple hugging - which is the image of a boy holding his lover in his arms while crying.

The wild and majestic beauty of Ban Gioc waterfall 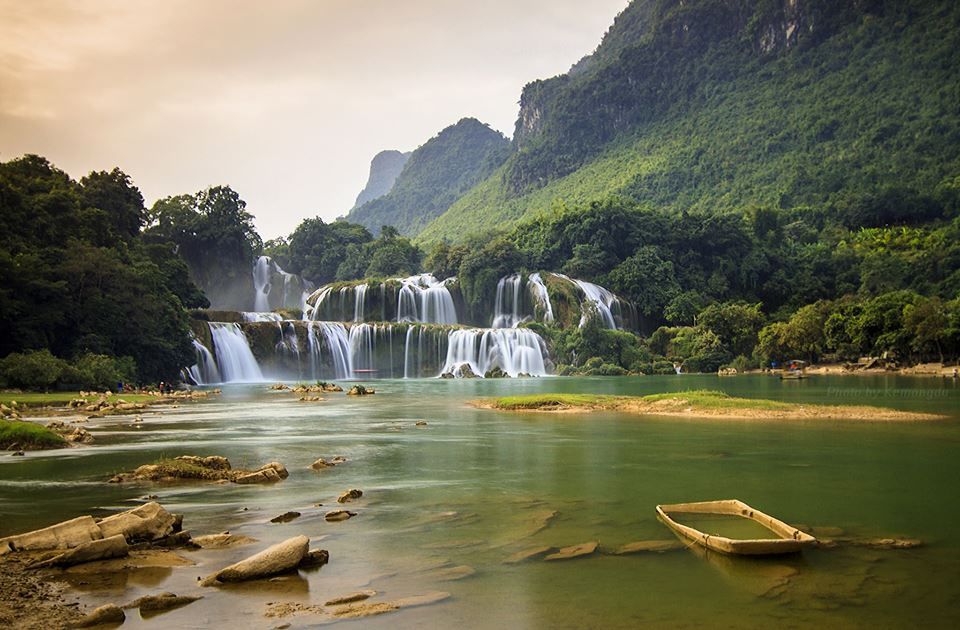 The waterfall from a distance at dusk. Photo: Pham Cuong.

Ban Gioc is known as the most beautiful waterfall in Vietnam with successive cascades, spreading up to hundreds of meters through many rock floors. At the same time, it is also recognized as the largest natural waterfall in Southeast Asia. 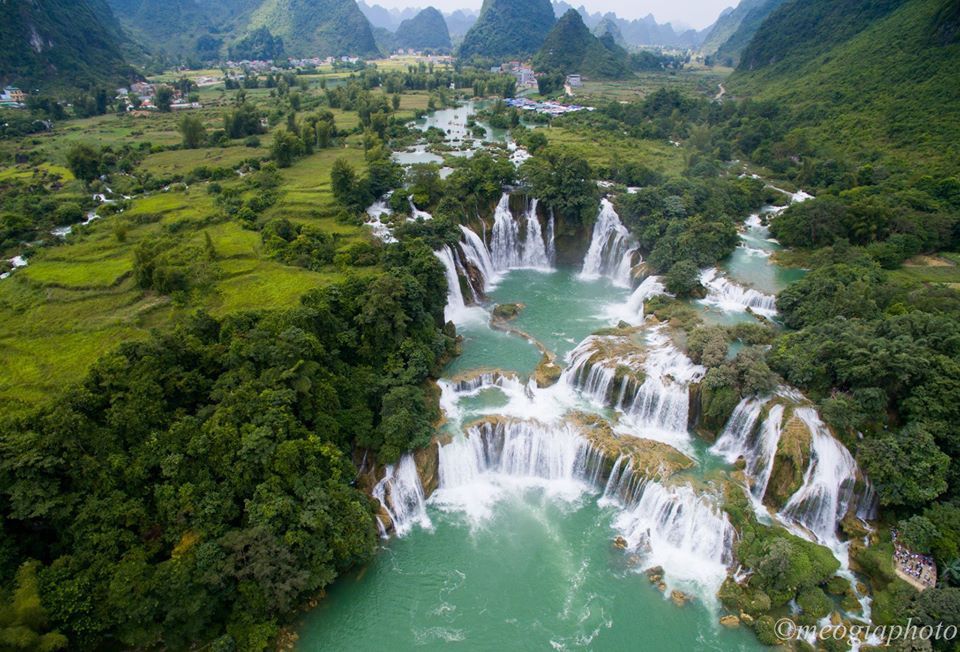 The waterfall has a width of 300m and a height of 53m. From above, large blocks of water pour down through many limestone steps to form a waterfall with three majestic floors. Despite the low terrain, the flow of water is always strong, creating white water bubbles like a dense layer of fog flying halfway up the mountain. On sunny days, the golden sunlight through the waterfall creates a shimmering and fanciful rainbow. Due to the overflow of water to the left of Ban Gioc, a sub-waterfall with many "threads" of water interwoven like a great curtain of nature is created, making it often likened to “the hair of a fairy” over the top of the mountain. 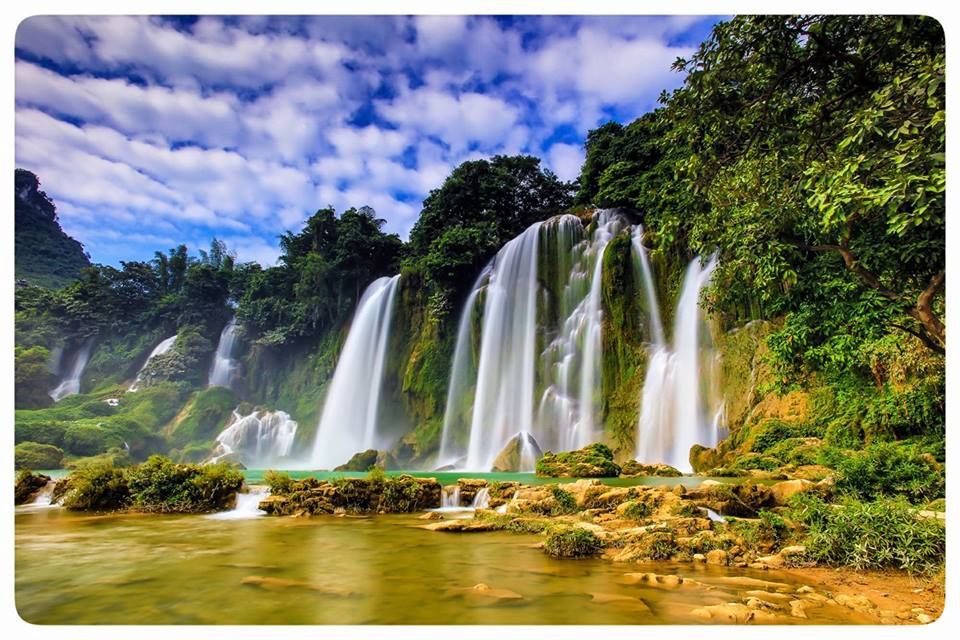 At the foot of the waterfall is the Quay Son river with the clear water reflecting the clouds on the sky, which is very charming. You can rent a boat or raft to the middle of the river to feel the poetic beauty of the waterfall among the rice fields and green lawns, which can easily steal your heart. In the afternoon, you can overlook the rice fields with buffalos leisurely grazing, while listening to the sounds of water rushing down. 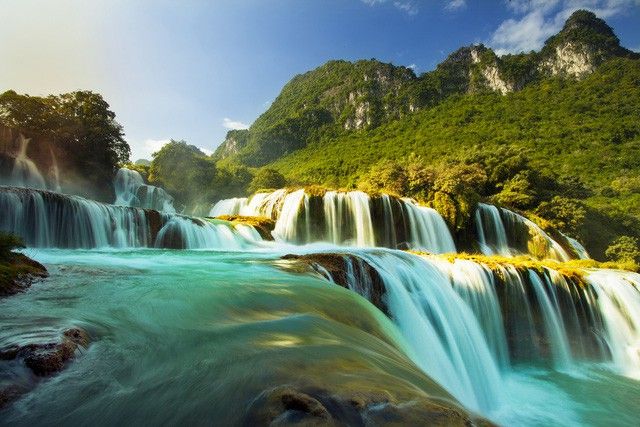 In spring, the waterfall is like a strip of silk as the water flows gently, but in summer - which is also the rainy season - Ban Gioc is very majestic due to the abundant source of water. The waterfall will be most beautiful in the period from August to December. You can admire the majesty of Ban Gioc in August and September (due to its accumulation of water from streams in the rainy season) and the ripe rice season in October. It is noted that in November and December, the wild sunflowers and buckwheat flowers cover the Northwest mountains and attract all kinds of bees and butterflies thanks to their eye-catching colours and fragrances, which creates an enchanting natural picture. 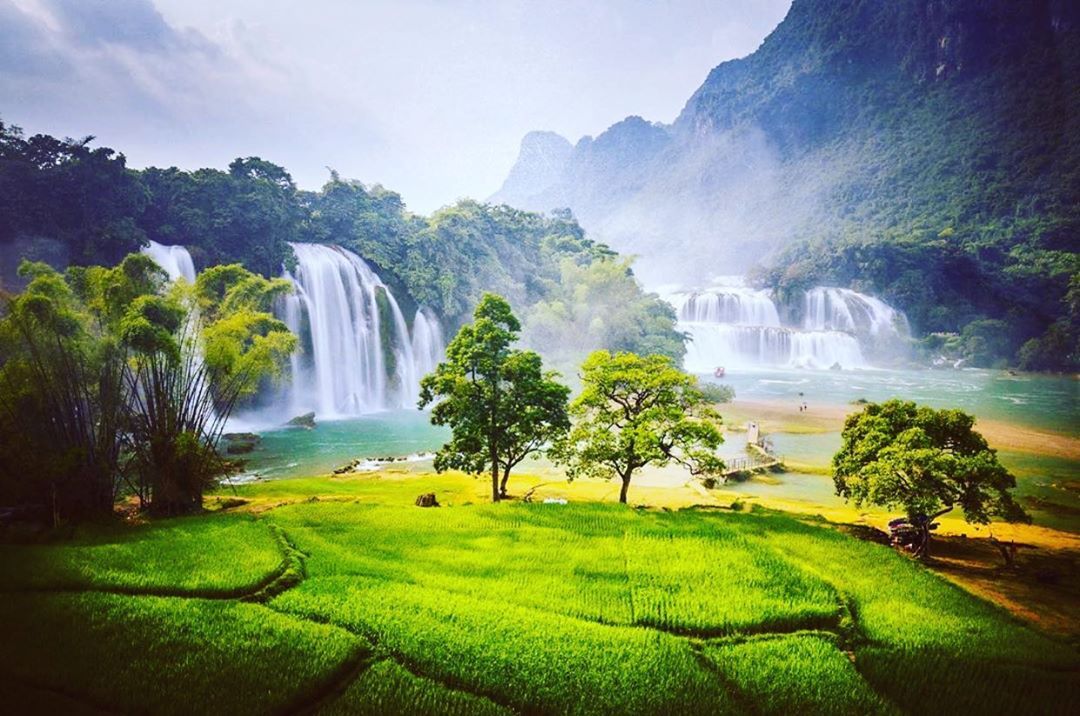 At the foot of the waterfall are rice fields and romantic green lawns. Photo: @foolishhandhungry1.

You can also participate in the interesting Ban Gioc waterfall festival with many activities such as: light festival at the foot of Ban Gioc waterfall; rituals at “Phat Tich Truc Lam Ban Gioc” pagoda to pray for peace and good weather; and stalls introducing products, specialties and culinary culture of Trung Khanh district. In 2019, this festival took place in 2 days, from October 5th to 6th. 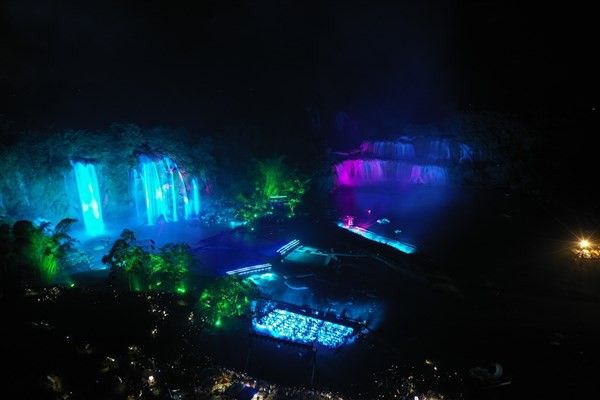 In addition to enjoying the majestic beauty of Ban Gioc, you should not ignore “Phat Tich Truc Lam Ban Gioc” pagoda - a spiritual tourist destination which is about 700m away from the waterfall. It is important to note that this is the first pagoda built on the northern border land of Vietnam. The construction of the pagoda was completed in 2014 on an area of 3ha, leaning on Phia Nham mountain and overlooking Ban Gioc waterfall. The pagoda is designed according to the typical Vietnamese architecture with the main materials of ironwood, traditional tiles and curved roofs to create a sense of majesty and serenity. This is a work to serve the religious and spiritual needs of Buddhists as well as of those who want to lead a religious life. 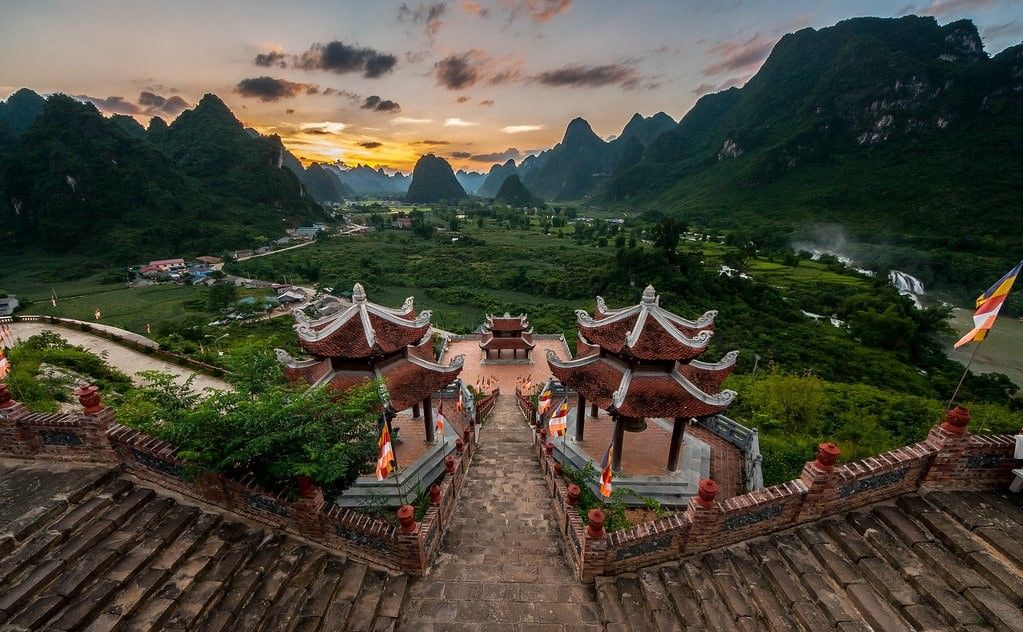 How to get to Ban Gioc waterfall

From Hanoi, you can travel by coach to Trung Khanh - Cao Bang with a fare ranging from VND 300,000 - 350,000/one-way ticket, depending on the type of the vehicle. The distance from the center of Trung Khanh district to Ban Gioc waterfall is about 20km, so you can rent a motorbike to conveniently sightsee the nature at the price of VND 100,000 - 180,000/day. 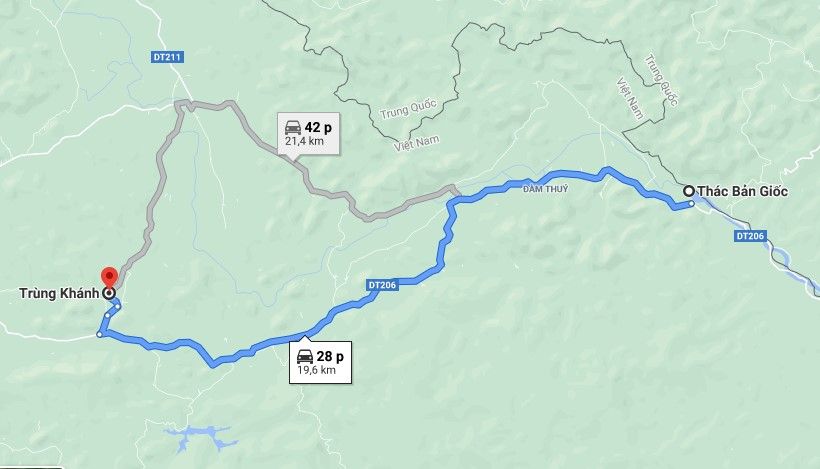 If you travel by motorbike or personal vehicle from Hanoi to Cao Bang, two options are recommended as follows:

- Traveling to Cao Bang in the direction of National Highway 3 through Thai Nguyen and Bac Kan: you can take advantage of this route to visit these two provinces. 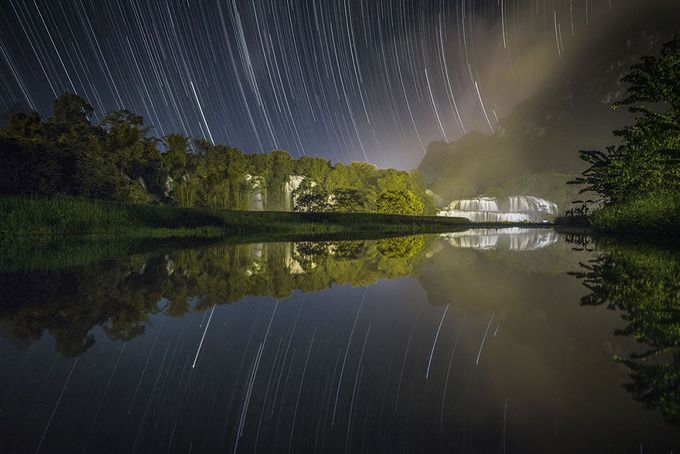 Cao Bang - a destination associated with wild and majestic nature - will definitely leave you a strong impression, and Ban Gioc waterfall is a poetic and charming highlight that will fascinate you from the first sight.