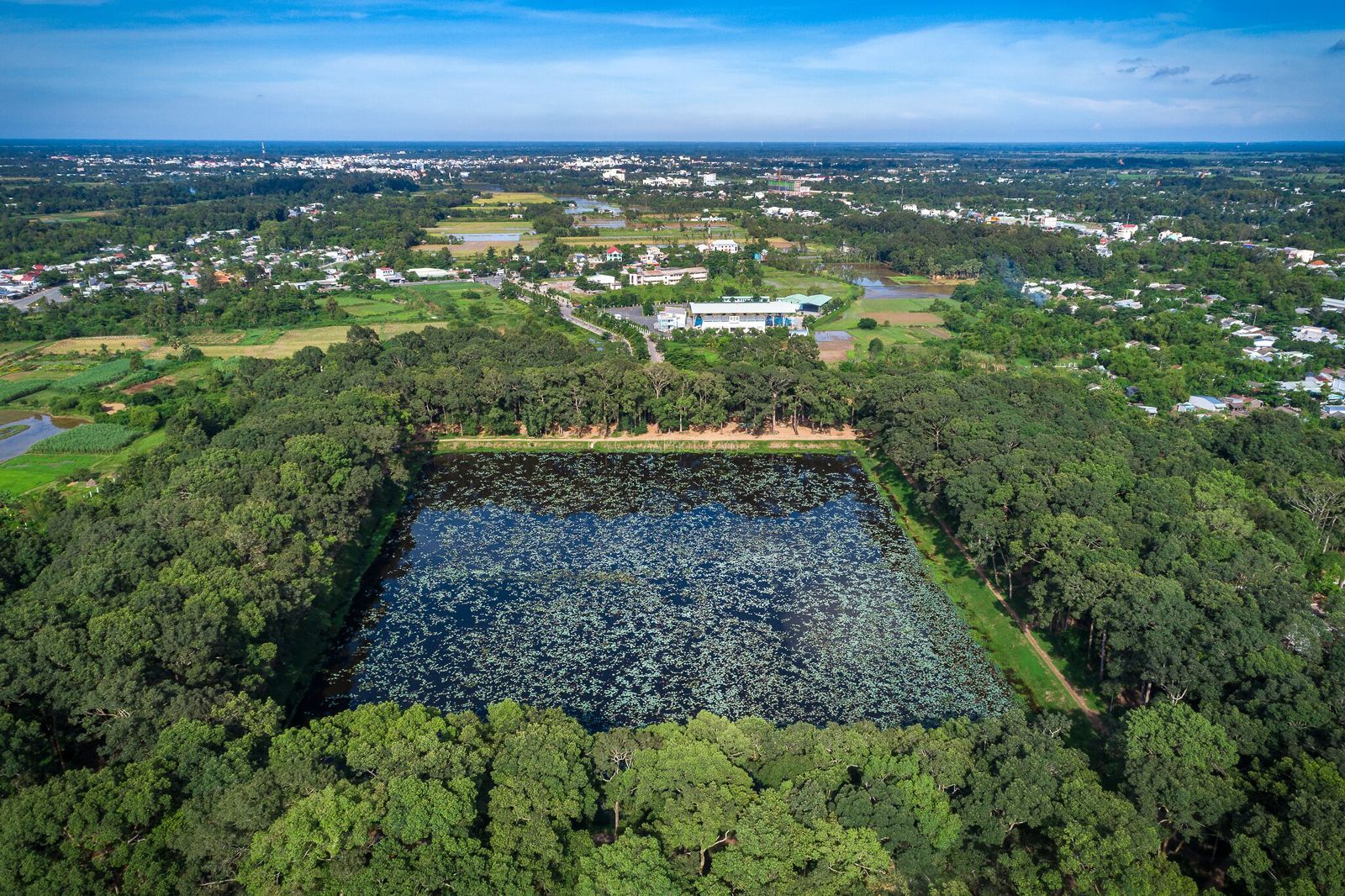 With more than 300,000 Khmer people living in Tra Vinh, its culture is a prominent point when it comes to tourism. Among destinations there, Ba Om Pond features the traditional Khmer values which are associated with interesting anecdotes that leave many people curious. 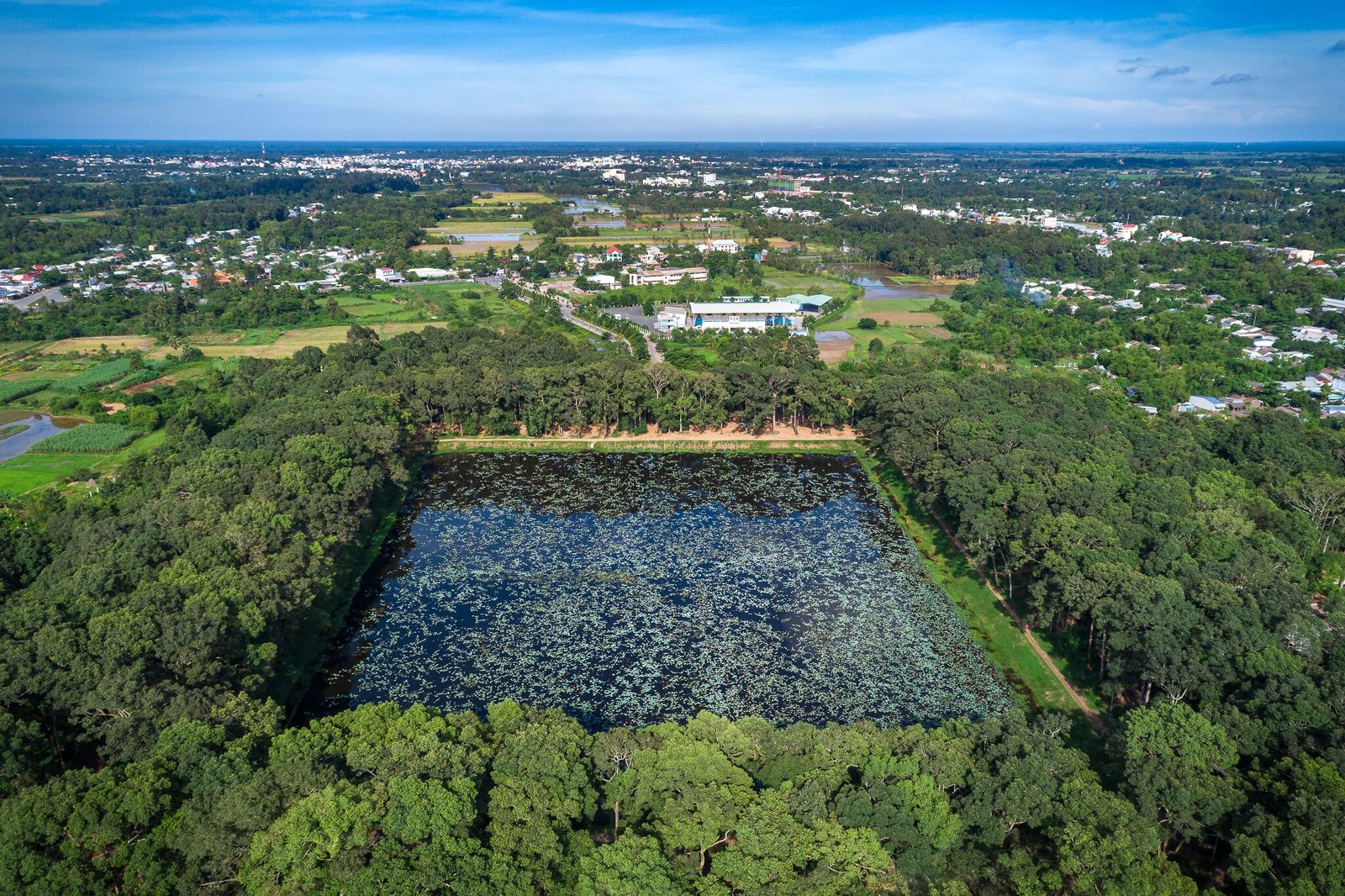 A panoramic view of Ba Om Pond from above. Photo: Daihocsi 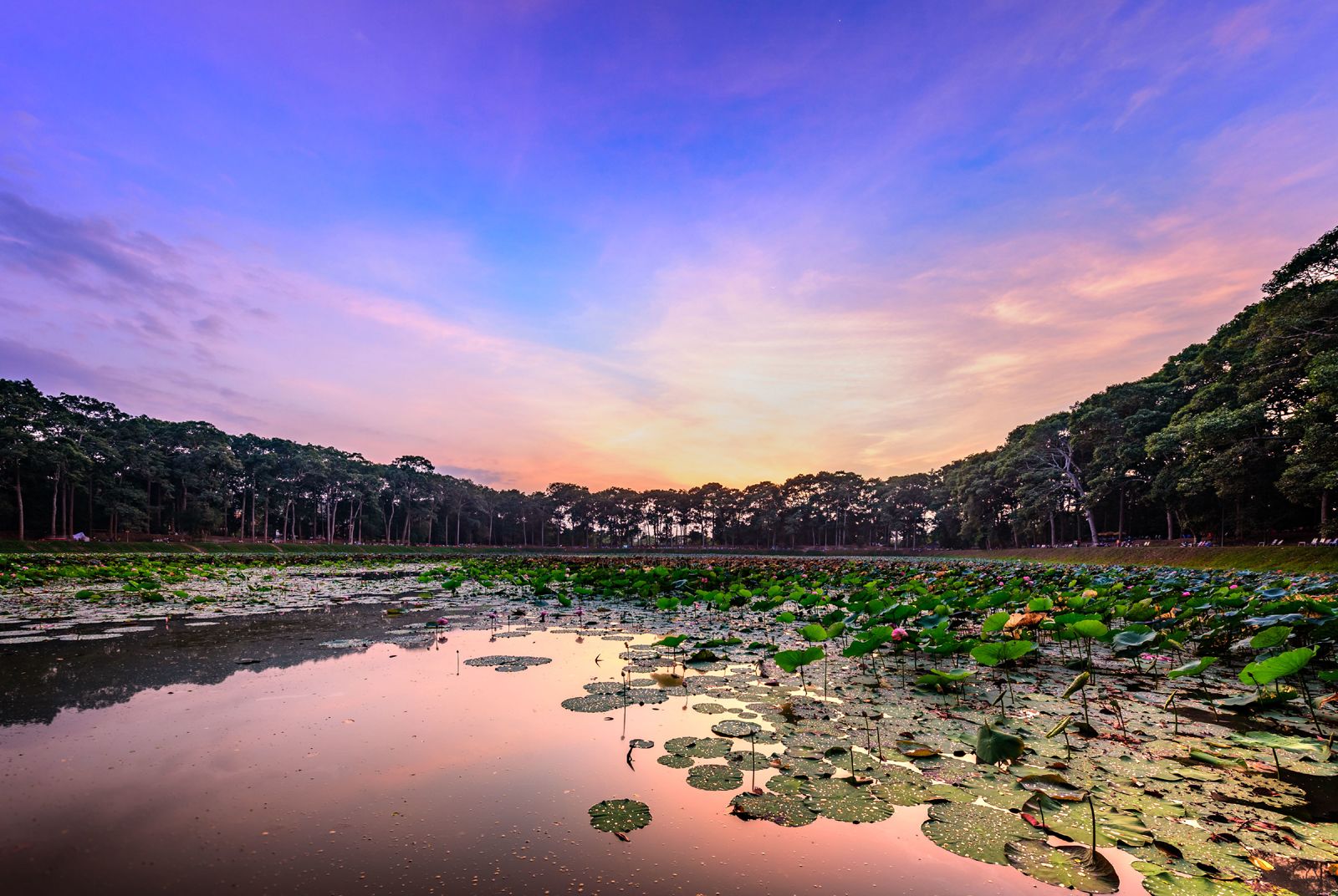 The whole campus covers an area of up to 39,000m2, including 10,000m2 of the pond. Ba Om Pond is also known as the “Square Pond” due to its shape. In addition to the wild beauty and fresh air, Ba Om pond whets visitors’ appetite for its mysterious anecdote.

According to local people and many recorded documents, this place used to be the land of the Khmer people - who followed Matrilineality as the woman would propose to the man. Over time, Patrilineality appeared and then completely contradicted all rules of Matrilineality, which gradually caused conflicts between the two regimes. In the end, the locals decided to organize a “pond digging competition” between the men's and women's teams until the appearance of the morning star. 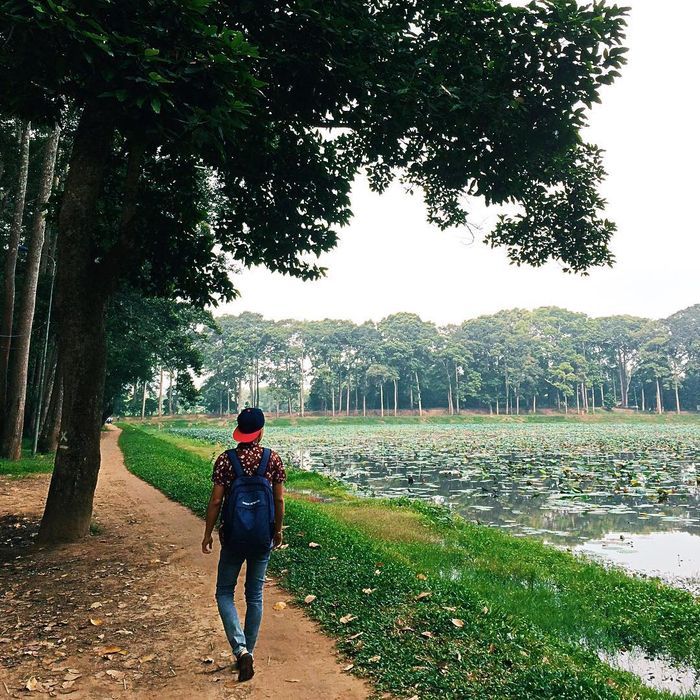 The pond is located right in the center of the campus, very convenient for visitors. Photo: thamhiemmekong

When the competition took place, as the men were extremely confident with their strength, they only focused on eating, drinking and having fun. That is why Ba Om (the leader of the women's team) hung a lantern on a tree to make the men mistake it for the morning star, causing them to come home. The women’s team then took advantage of the time to dig the pond. By the next morning, everyone was surprised when the pond of the women's team was square, full of water, and in stark contrast to that of the men's team - which led to the victory of the women's team. To commemorate Ba Om's merits, people named the pond after her name.

Things in the campus of Ba Om Pond

The water in the pond is clear and calm all year round. If you come here in the water lily season (around November and December), you will be able to admire the romantic scene with purple water lilies blooming over the surface of the pond.

It is important to note that in the campus of Ba Om Pond, there is a trail with a length of more than 2km, coupled with more than 500 dipterocarpus alatus trees that are over several hundred years old. The big stumps with many strange shapes give visitors a feeling of being lost in a fairy forest. Thanks to this forest, the entire Ba Om Pond tourist area is shady, fresh and cool. 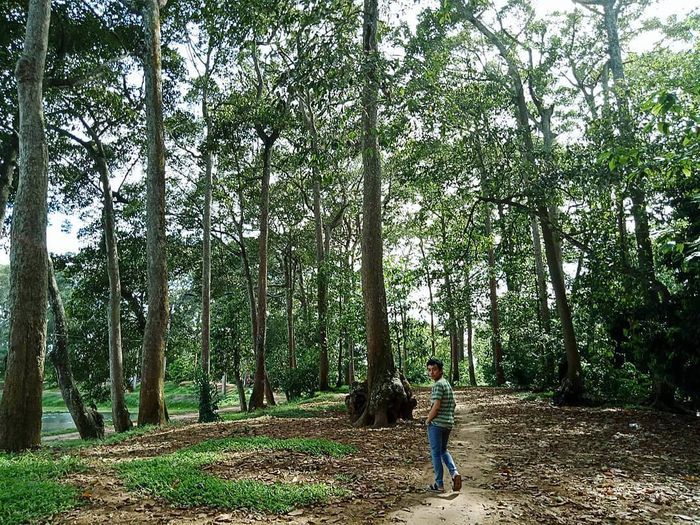 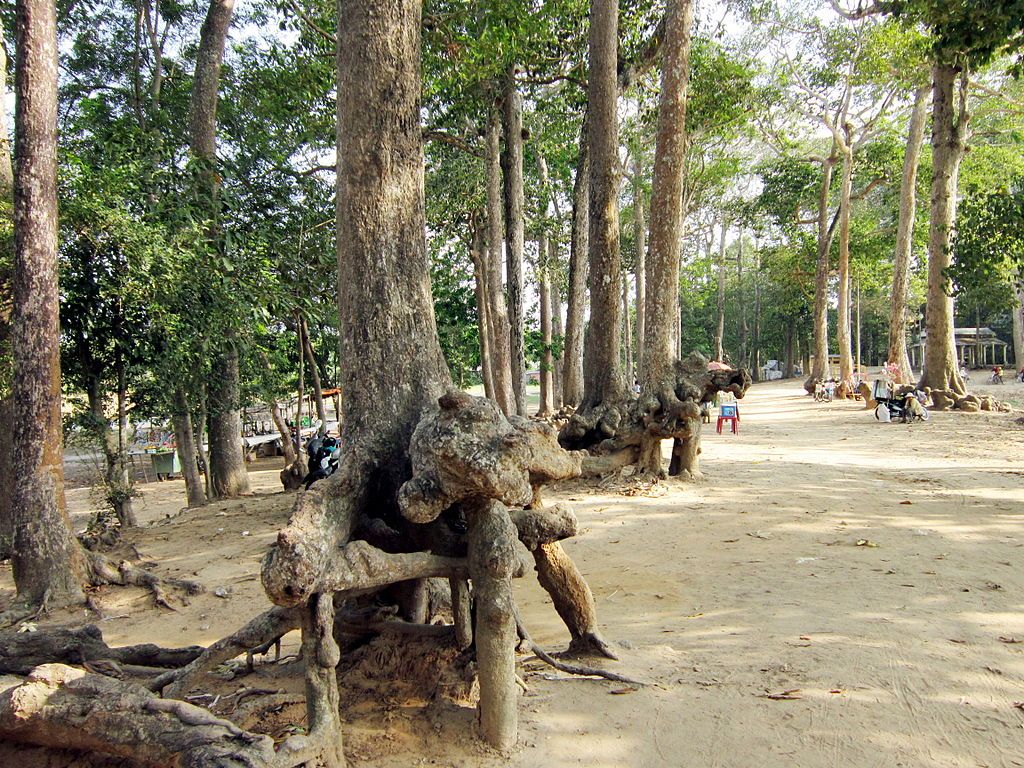 On holidays and new year days of the Khmer people, Ba Om Pond becomes a place of hosting community activities. In the October of the lunar calendar, you will have the opportunity to participate in Ok Om Bok festival, which is a typical cultural festival of Khmer people. Ok Om Bok, also known as the Moon Worshiping Festival, is held on the 14th and 15th day of October in the lunar calendar. The Khmer believe that the Moon is the god who has the power to influence the crops, so they will give thanks to it after the first crop. 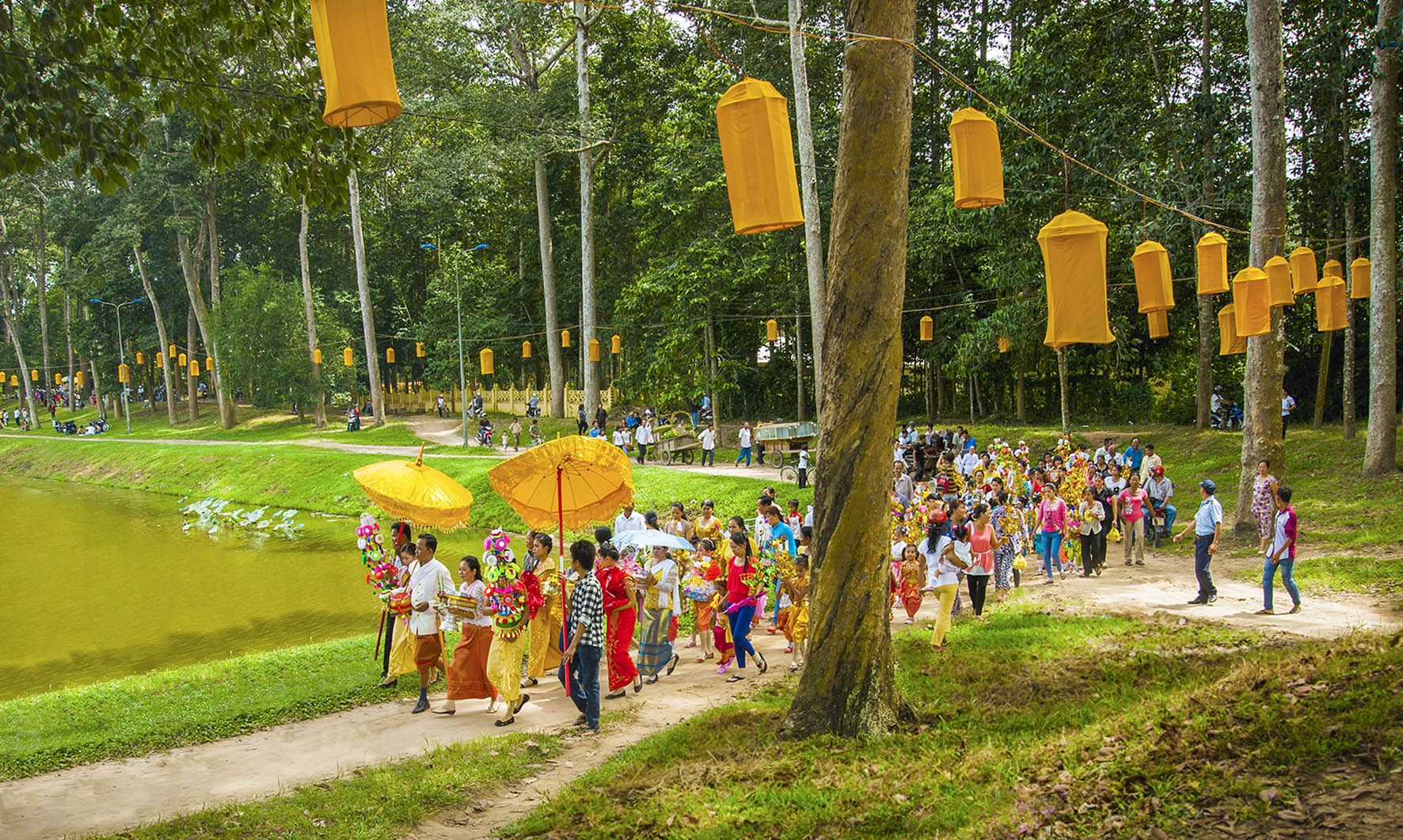 During the festival, people dance and sing together to tighten the solidarity and friendships of different ethnic groups. At night, the campus of Ba Om Pond is sparkling, fanciful and bustling due to the Wind Lantern Festival. Many types of lanterns with all sizes are released into the sky, carrying wishes for good weather, fruitful crops, health and peace. 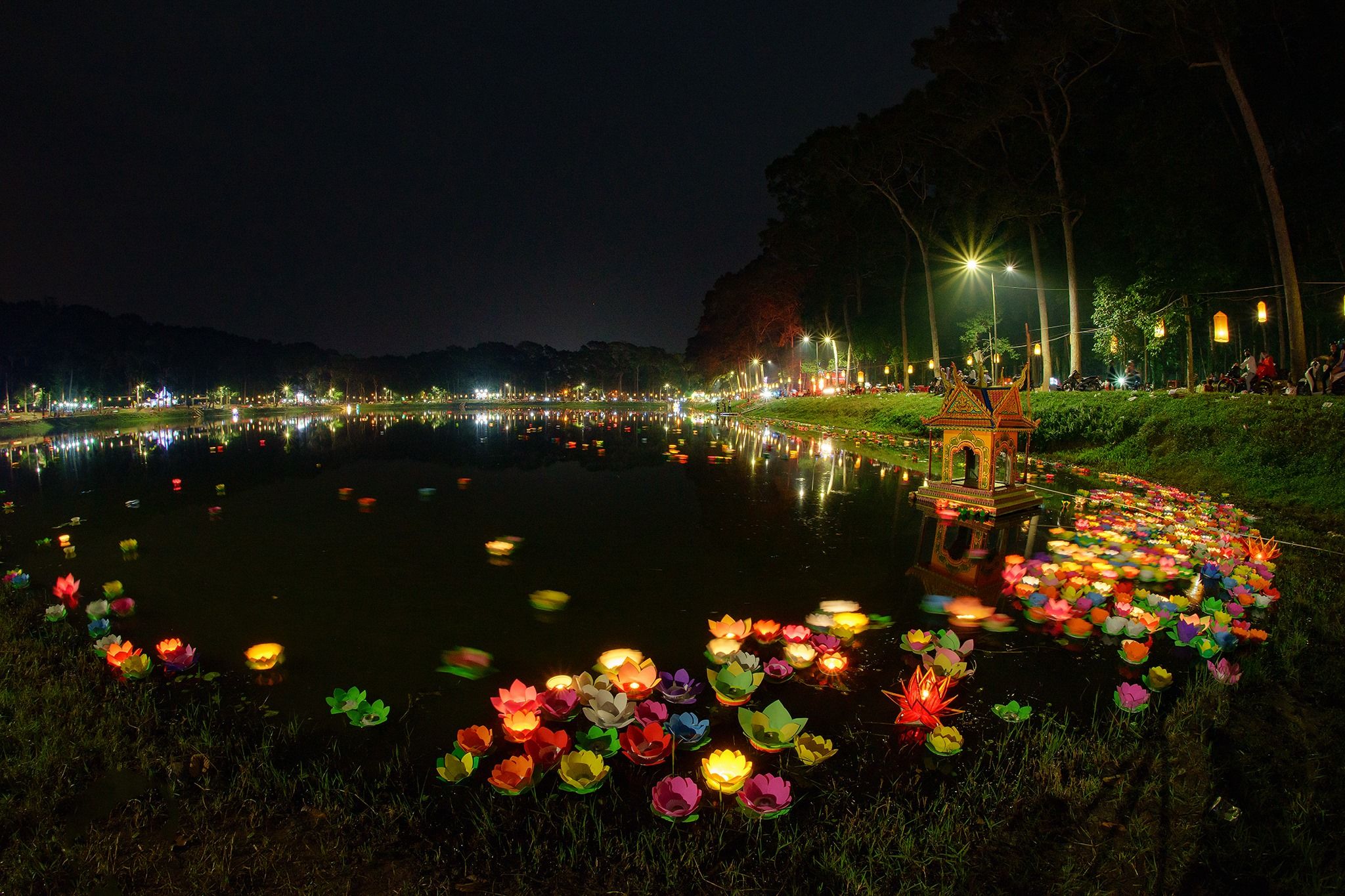 Ok Om Bok festival is not only held at temples, but also in every Khmer family. The people choose a high courtyard (to see the moon clearly) as a place of the ceremony. Ok Om Bok starts when the moon is high. The celebrant displays the newly harvested items, including green rice, bananas and potatoes, and then gives thanks to the Moon. Next, the elderly in the family roll the green rice into round balls with potatoes and bananas for the children, and then ask them to wish. The child's innocent words are also the things that every family wants to send to the Moon god.

The ancient pagoda reflecting on the pond's surface

In the campus of Ba Om Pond, it is advised that you should visit Ang Pagoda. This Khmer pagoda was built in 990 and it has existed for more than 10 centuries. In Khmer language, it is called Angkorajaborey. Among more than 141 Khmer pagodas in Tra Vinh, Ang is famous for its ancient and unique architecture, which features the cultural and religious values of Khmer and local people. 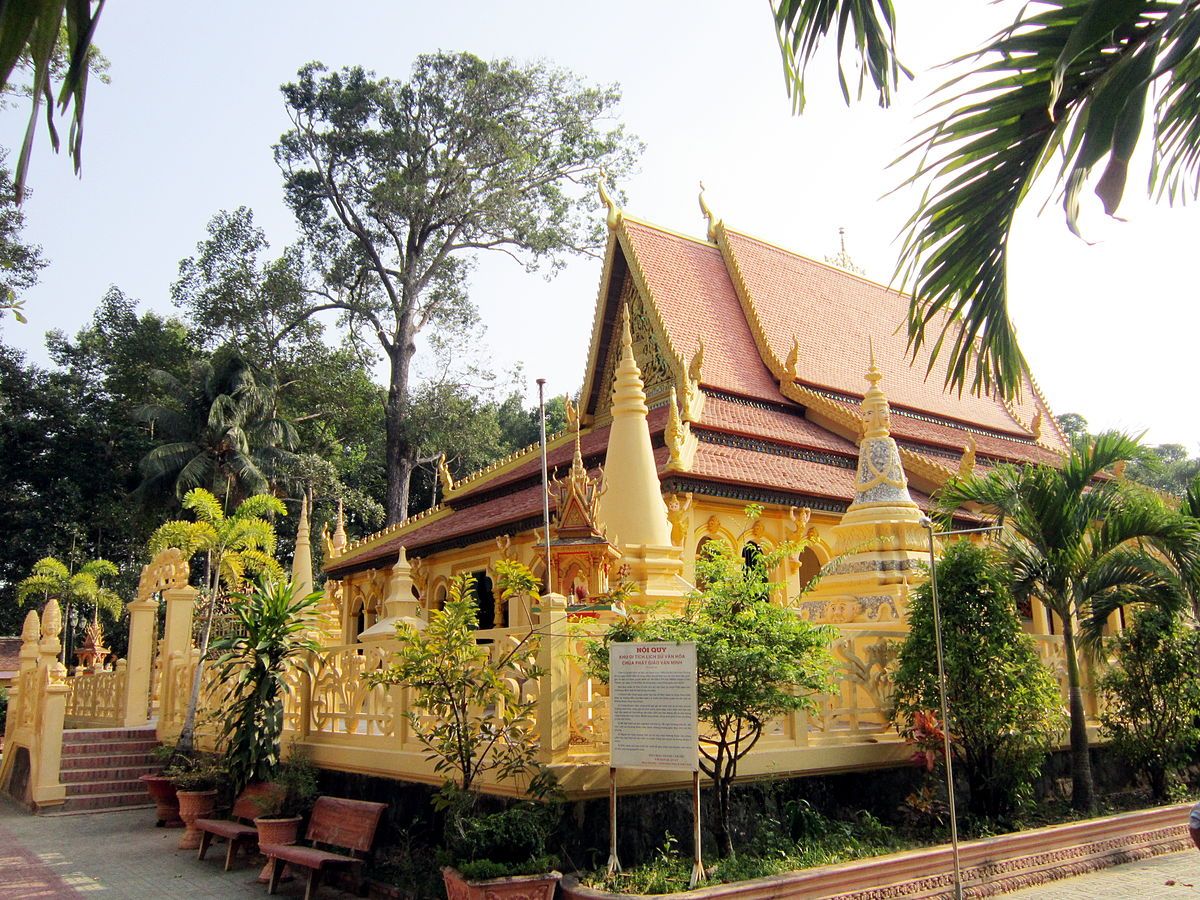 The architecture inside is based on the typical features of “pagoda tower” of the Khmer culture with characteristic yellow color. The gate of the pagoda consists of three tall towers with the symbol of the Ogre - the image of the “temple protection'' that comes from the Brahmin culture of India and then influenced the Khmer culture. In front of the main hall are 6 tall pillars carved with the image of typical fairies and birds of the Khmer.

The main door of the pagoda faces the East while the back door faces the West. The main hall worships Shakyamuni Buddha, with a large Buddha statue in the middle and more than 50 small Buddha statues around. On the ceiling as well as the surrounding walls are paintings recounting four stages in the life of Buddha. 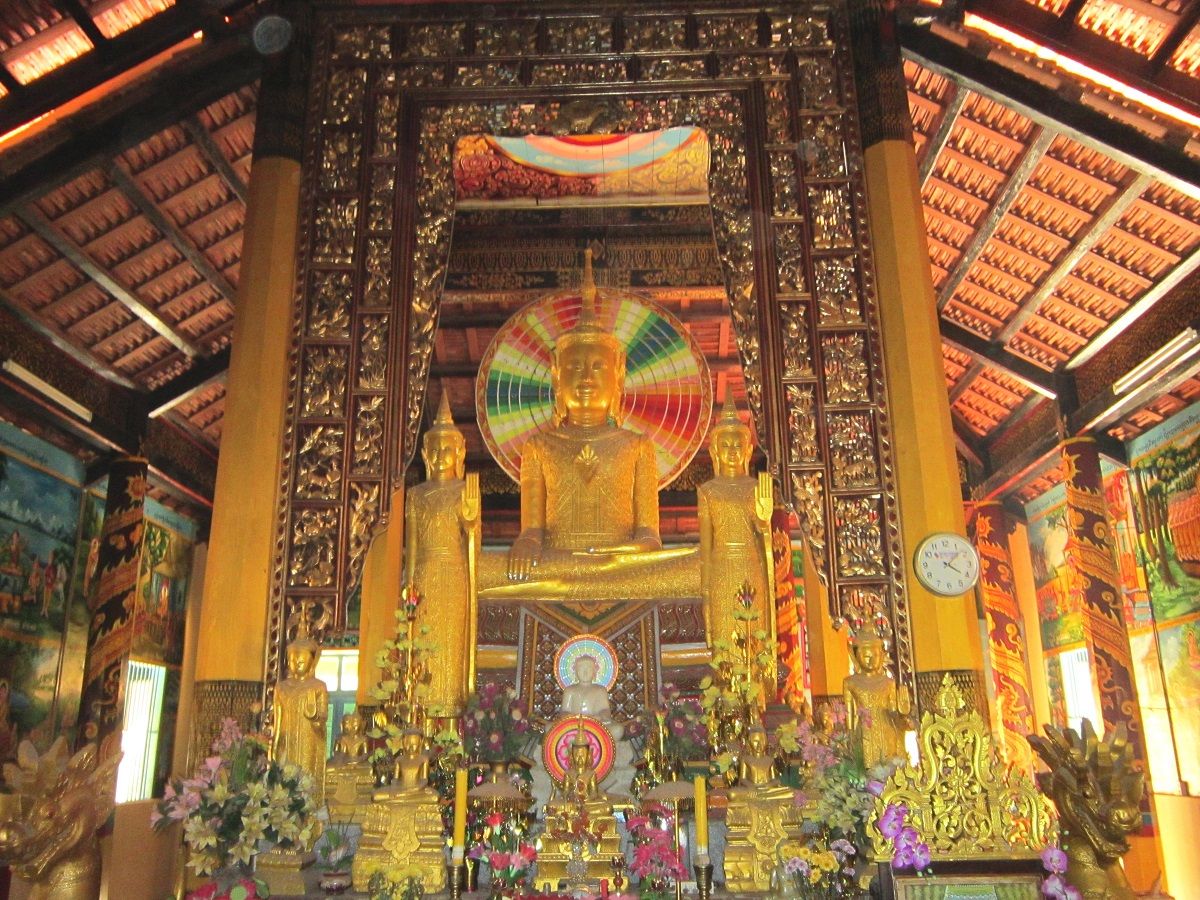 The main hall has many Buddha statues. Photo: wiki.youvivu.com

The quiet space of the pagoda gives visitors a sense of peace. The sound of wind blowing dried leaves across the courtyard, the echoing sound of the pagoda bell, and the faint scent of incense help you find peace of mind. 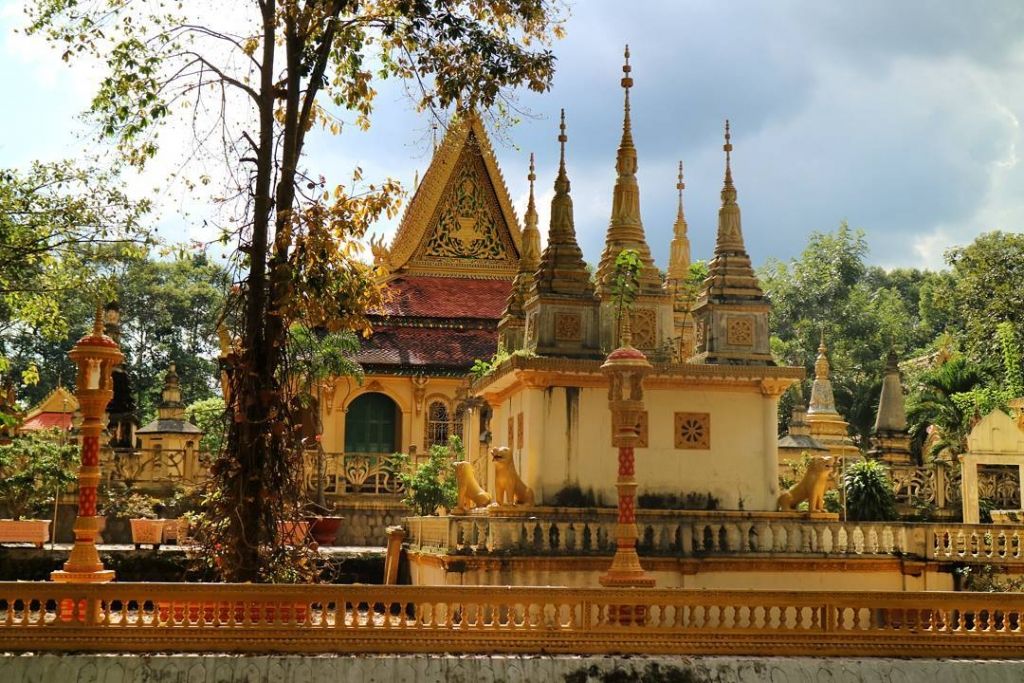 The ancient beauty of the hundreds year-old pagoda. Photo: vietnammoi.com

With its unique natural landscape and interesting anecdotes, Ba Om Pond has become one of the outstanding cultural destinations of Tra Vinh which attracts many visitors.