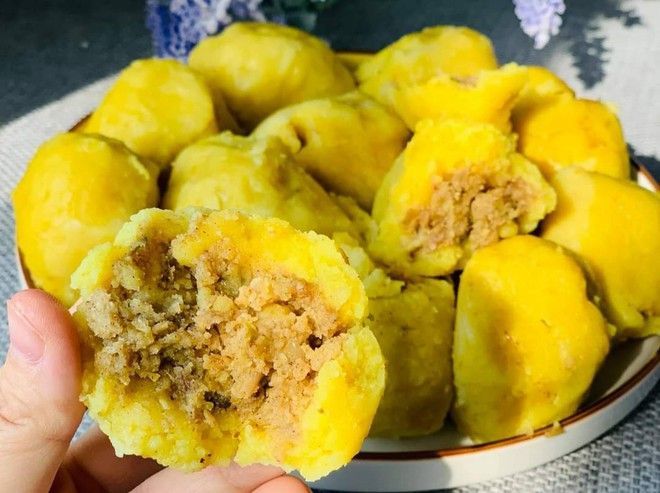 Not only does Thai Binh have historical and cultural relics, as well as traditional festivals and folk games, but this province also attracts tourists with a wide variety of famous specialties. Here are the five typical dishes that you should definitely try when coming here.

Cay cake in Nguyen village is a specialty of Nguyen Xa commune, Dong Hung district. It is said that this kind of cake appeared in the 1740s of the 18th century in Nguyen village, Co Coc canton, Than Khe district, Tien Hung, which is now Nguyen Xa commune, Dong Hung district. The lady Nguyen Thi Tan once followed her father into the palace and then was asked by King Le Hien Tong to teach his concubines. When the king had Prince Le Duy Vy, Mrs. Tan was assigned to take care of the prince. While growing up, Prince Duy Vy was appointed as the crown prince, however due to Lord Trinh's desire for the Le dynasty to regain power, he framed the prince and imprisoned him. During the crown prince's imprisonment, Mrs. Tan was the only person to be allowed to visit him. As the crown prince could not eat the food for prisoners, she created Cay cake for him. That's also the reason why Mrs. Tan was then imprisoned for more than 10 years. After she was released from prison, King Le Hien Tong appointed her as “District Lady”. When the son of Crown Prince Le Duy Vy (King Le Chieu Thong) ascended the throne, he conferred the title “Kiet Tiet Cong Than Bao Mau Dai Vuong” to her to remember her merits to his father. Later on, she taught others in the village how to make Cay cake, so now we have the specialty of Cay cake today. 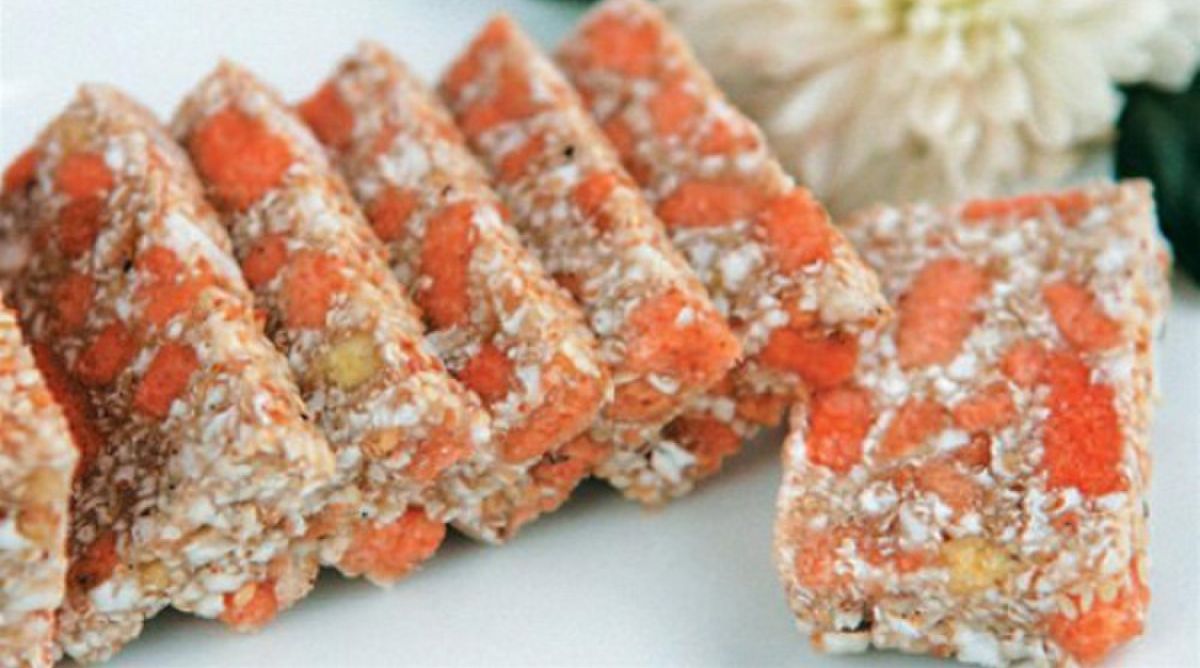 This kind of cake has a red-orange colour like crab-roe, so it is named “Cay cake” (which means “fiddler crab” in Vietnamese). Photo: doisongphapluat

The name of the cake often makes people think that the main ingredient of the cake is fiddler crab, however, it is the cake’s red-orange colour similar to crab-roe that leads to this name. Nguyen village's Cay cake is made of common ingredients in the life of the locals. The cake is chewy, fragrant and has a characteristic rich flavour. 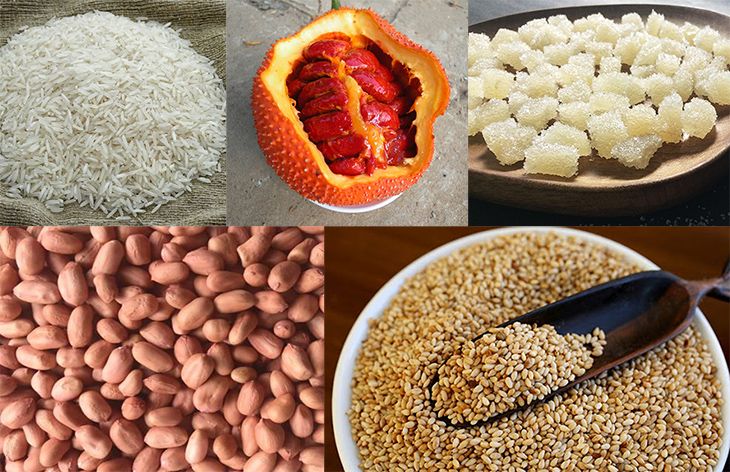 The ingredients for making Cay cake include sticky rice, gac fruits, peanuts, roasted sesame, squash jam, malt and grapefruit essential oil. First, sticky rice is divided into 2 parts: while the first part is steamed with gac fruit juice to create a red color, the second part is steamed with fructus gardeniae to have a bright yellow color. These two types of sticky rice are pounded, sliced, dried, and then fried until they are crispy. Other ingredients such as sesame and peanuts are roasted, while ginger is sliced. Mix all the ingredients together, then add the boiled cane sugar and stir the mixture well. Finally, pour this mixture into a mold, wait for it to be cooled down, then cut the cake into small pieces. 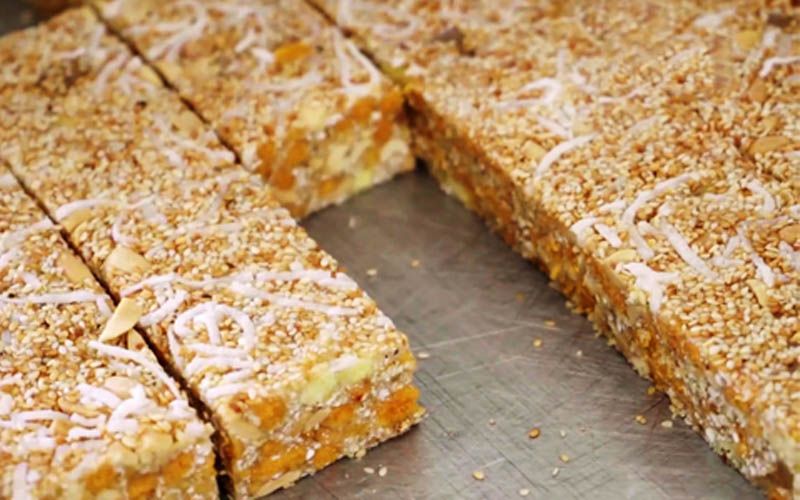 The process of cutting the Cay cake. Photo: dulichvietnam.com.vn

A standard piece of Cay cake must have a moderate level of sweetness with fragrance and flavours from peanuts, roasted sesame, squash jam, sticky rice and ginger. 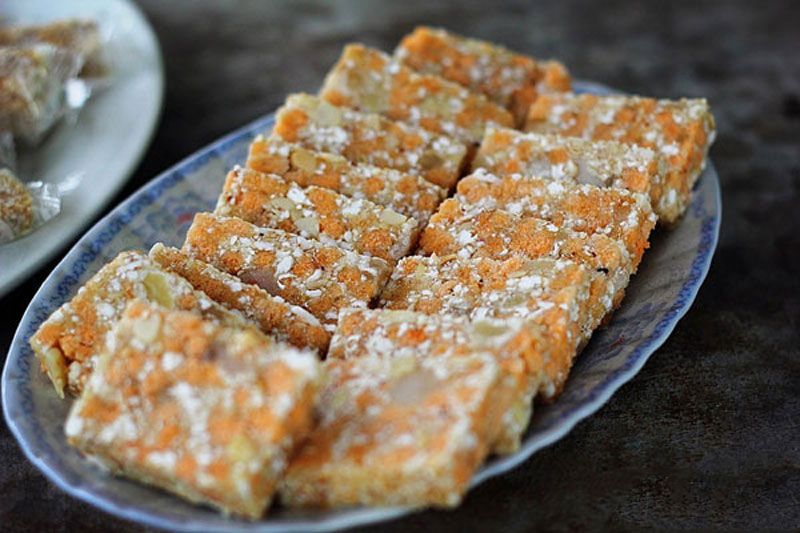 People often enjoy Cay cake with green tea. The acrid taste of fresh tea and the sweetness of the cake create a great blend as it can decrease the greasiness of the cake.

Quynh Coi fish soup is famous for its simplicity and unsophistication in processing, but still having its own unique and attractive flavour. What makes Quynh Coi fish soup different from those in other regions is the utilisation of “banh pho” (a special kind of rice noodles) instead of common noodles. 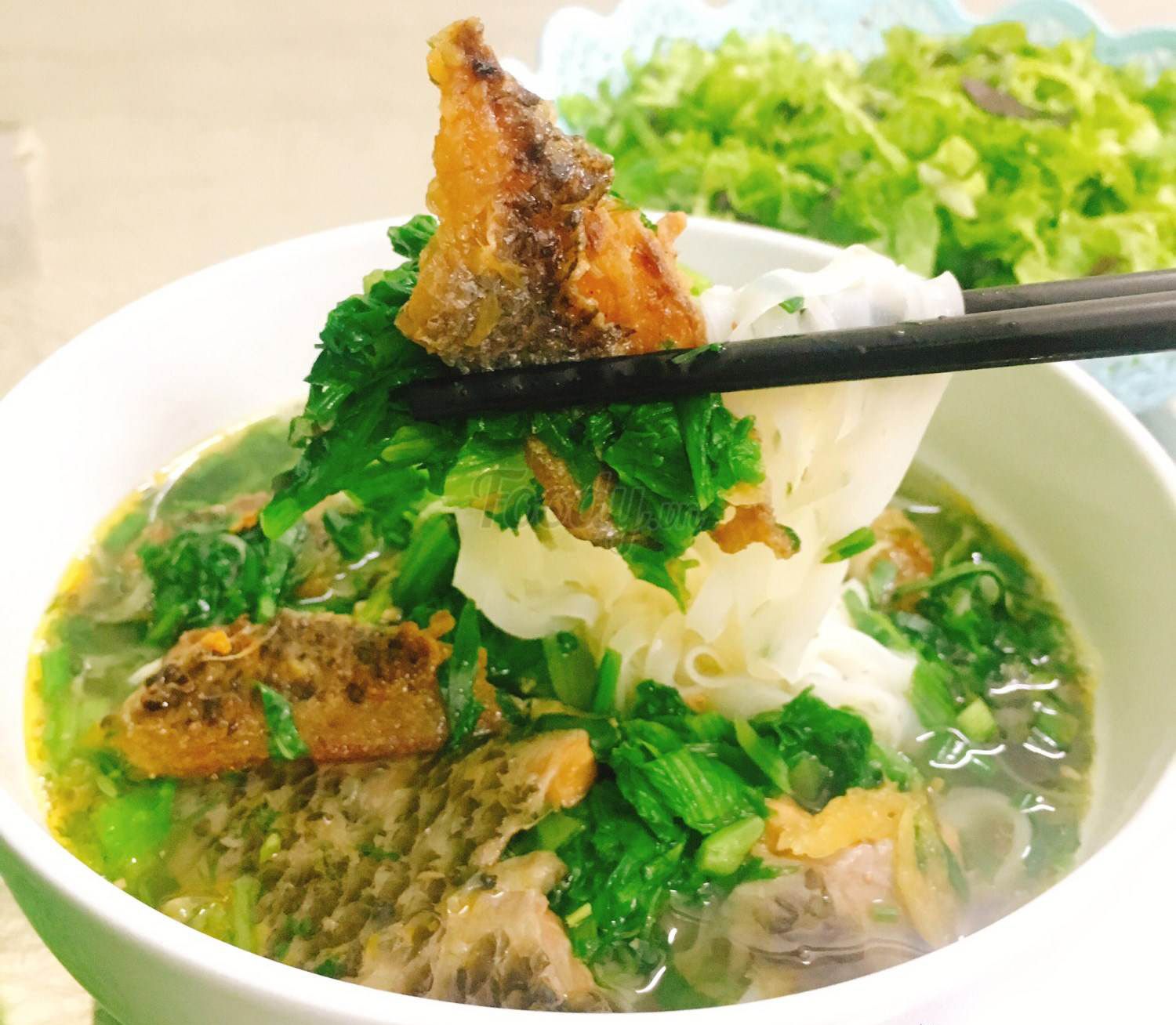 The dish is made from simple ingredients such as fish, vegetables and “banh pho”. In the past, the fish used by Quynh Coi people was fatty perch due to its firm meat, but today, snakehead fish or grass carp can also be used to make the dish. The fish meat is marinated with ginger and salt/fish sauce, then is half-grilled and deep-fried to have an attractive aroma. “Banh da”, which is thin but chewy and is made from the rice of the previous crop, is a special type of noodles from the traditional village for making noodles in Quynh Coi. It is important to note that “banh pho” is dried and can be kept for 6-8 months. 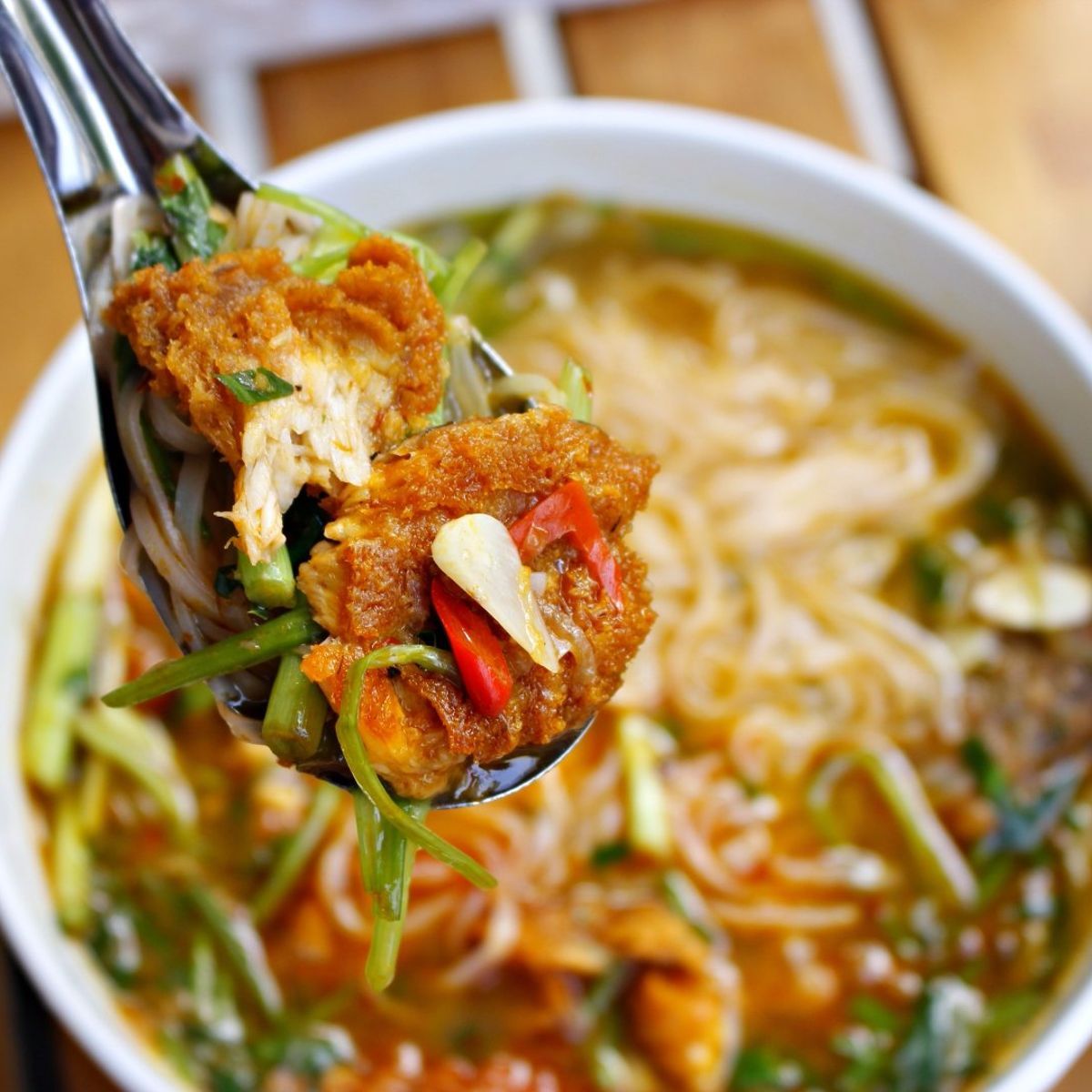 The delicious fried fish in a bowl of fish soup. Photo: vietnamtravellog

The broth is stewed from fish and pork bones, so it has a light sweet taste. A bowl of fish soup has all kinds of attractive colours: the white of “banh pho”, the golden color of fried fish pieces, and the green of dill, spring onion and sawleaf. When enjoying, you can feel the chewiness of “banh da”, crispness of fried fish, sweetness of broth and the fragrance of ginger. Depending on your preference, you can add some lemon juice or hot chili. 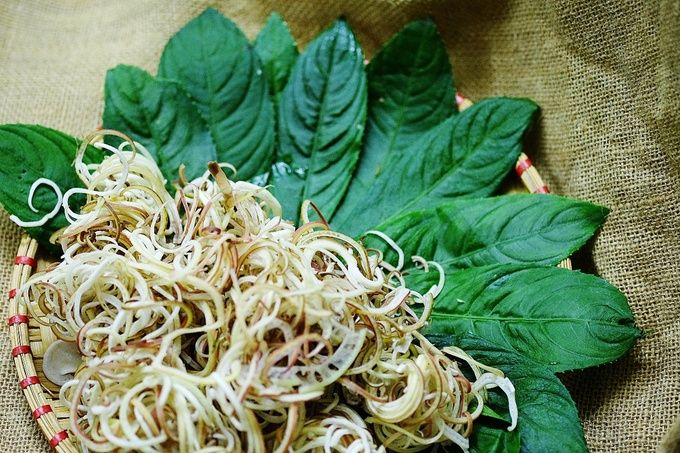 Banana flowers and blumea lanceolaria leaves are the two ingredients that make Thai Binh “Bung Noodle” different from those in other regions. Photo: vnexpress

The meat from pig’s trotters will be cleaned, boiled, and then sliced, while the bones are stewed to get the broth. The pork mince should include some fat to create the richness for the patties. Wrap the pork mince with blumea lanceolaria leaves and then tie the patties by a toothpick or thread to stabilise them. After the patties are fried, remove the toothpick or thread. Next, slice banana flowers, soak in water for 30 minutes to remove all the resin, then wash and dry it. Stir-fry some shallots with two tomatoes in a pot, then pour in bone broth into this pot, add banana flowers and fried patties, and wait until the dish is well-cooked. 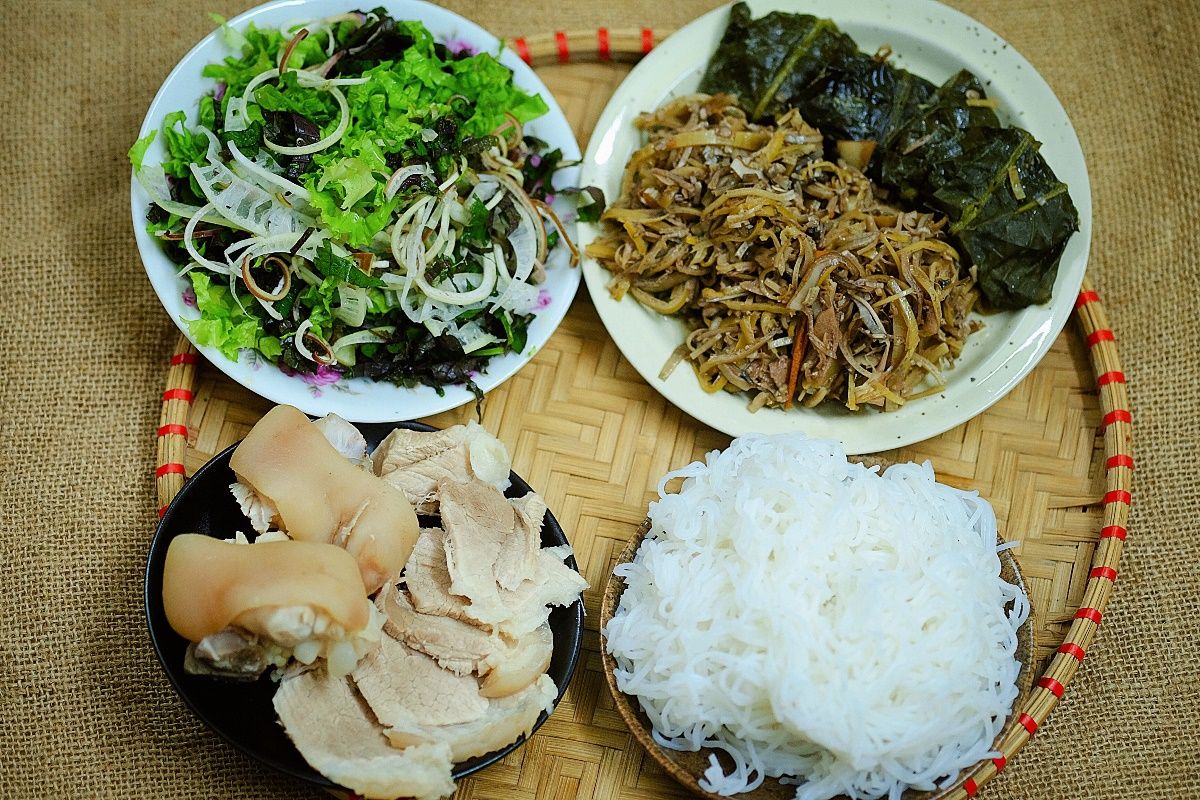 A bowl of Thai Binh “Bung Noodle” will have the chewiness of “banh pho”, mixed with the fragrance of pan-fried meat patties wrapped in blumea lanceolaria leaves, the richness of pork’s trotters, the light acridness of banana flowers, and the freshness of many raw vegetables, creating a perfect combination. 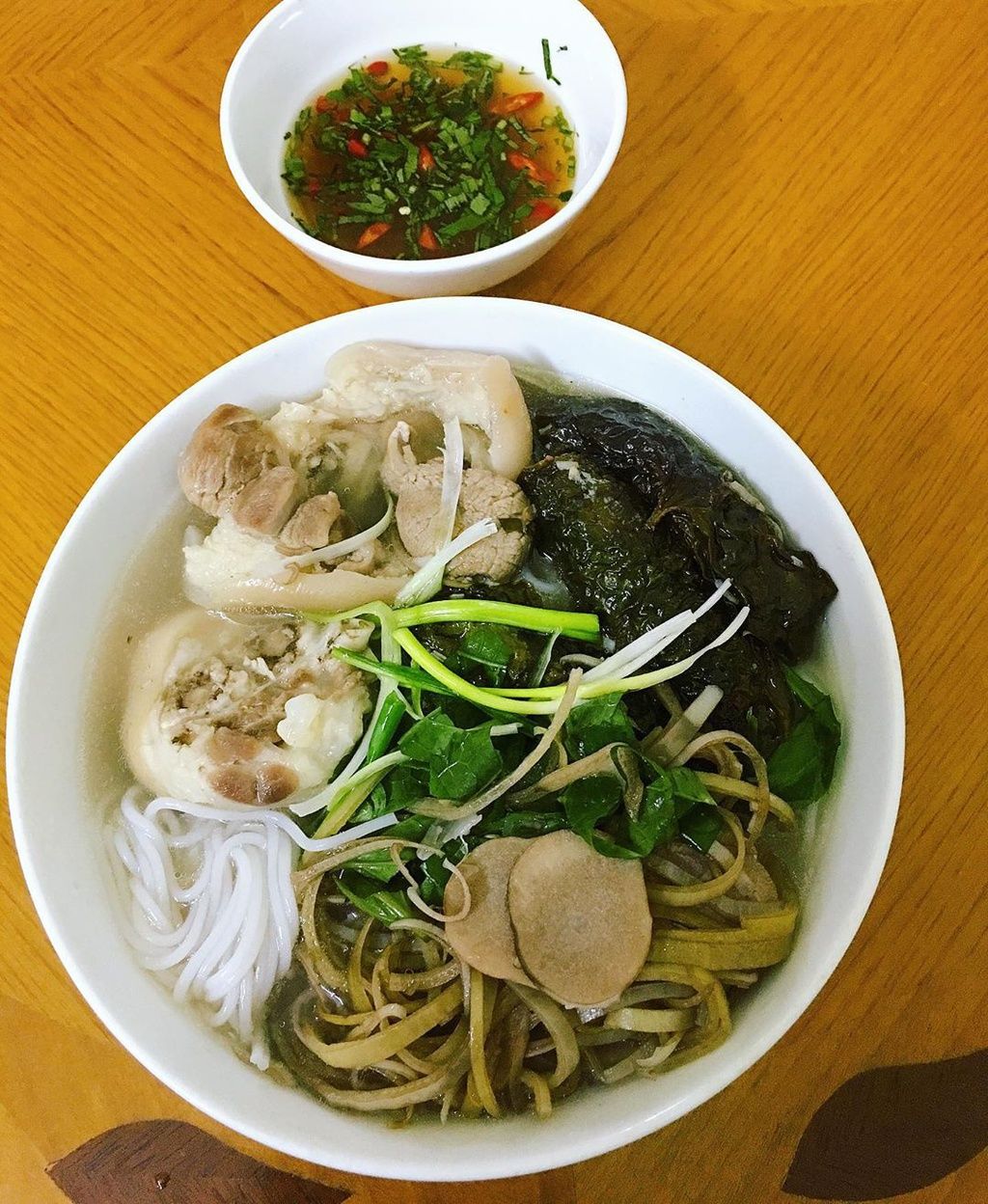 Coming to “the home of rice” without enjoying turmeric cake, which is a specialty of Phu Coc village (Kien Xuong district), would be a pity for you.

As the cake is made from turmeric, it has a very eye-catching yellow colour, and depending on the person who makes the cake, it will have either a diamond or round shape. Other ingredients are plain rice, spring onions and wood ear, and it is best to be served hot.

It is very time-consuming to make turmeric cakes as you must go through many stages. If you want the cake to have a bright yellow color, you must choose the old turmeric. After washing it, you have to boil it, extract the juice and then knead it with rice flour. 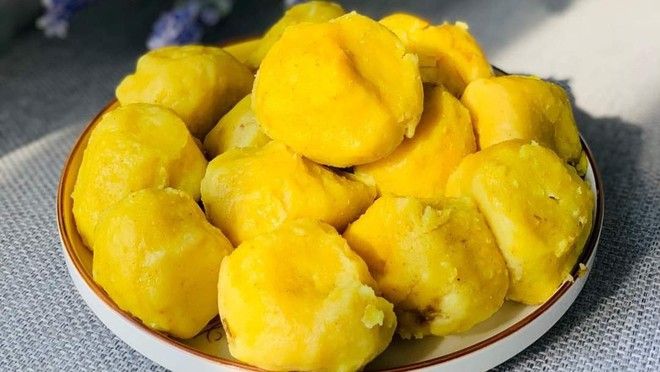 Turmeric cakes are usually round or diamond shaped, made from plain rice. Photo: yan.vn

It is noted that you must choose plain rice (instead of sticky rice) to make the cake. Firstly, soak the rice, then ground it into flour. It requires you to be very skillful to have a kind of dough that can make the finished cake not too sticky. Once the dough is cooked, knead it thoroughly with your hands (while it is still hot). These steps take up to 4 hours to complete, then, put the cake into the steamer for 1.5 - 2 hours. 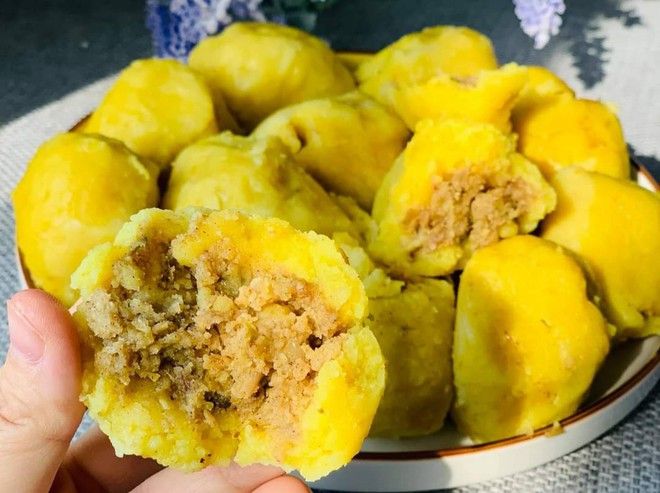 When enjoying the turmeric cake, you will be able to feel the softness of the cake, the characteristic aroma of shiitake and wood ear, and the greasy taste of meat, fat and shallots. These factors are combined to bring you a perfect flavour.

One of the specialties that you have to enjoy in Thai Binh is Nhech raw fish salad in Thai Thuy.

Nhech is a kind of fish that lives in brackish water, shaped like an eel - but larger and longer. This fish can be processed into many different dishes, but the most famous one is still raw salad. 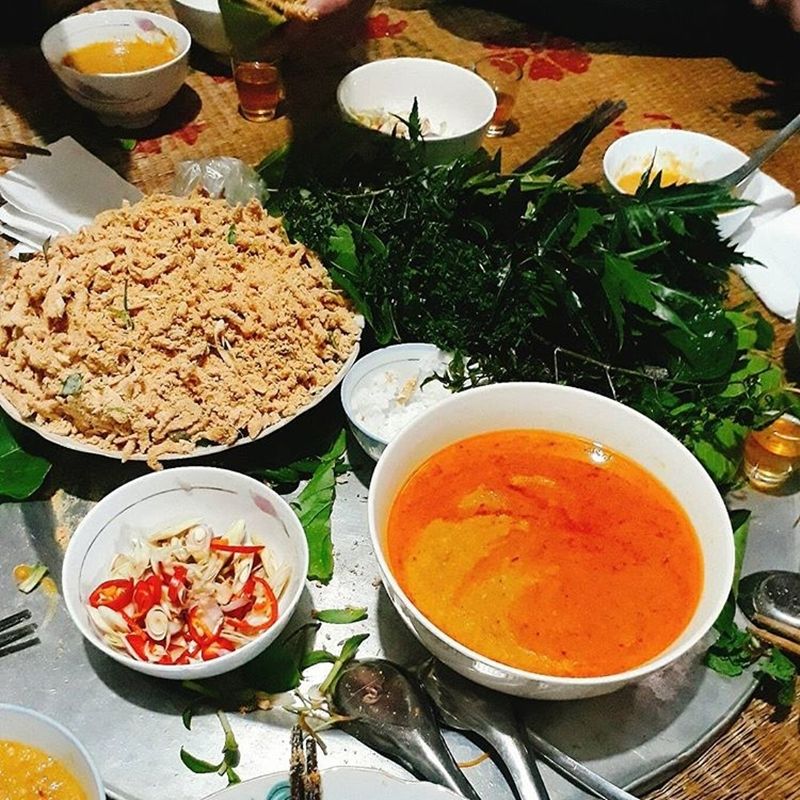 Use ash or lime water to clean the slime of the fish, then take the fish meat while removing all of the other parts of the fish such as intestines, head, tail or bones. Next, mix the thinly sliced meat with crushed galangal, roasted rice powder, lemon, and ground pepper. In order to have a delicious salad, the ratio of spices is the “secret” of each family in Thai Thuy.

When enjoying, you will be served with leaves such as ming aralia, basil, cassava leaves, fig leaves, banana flowers, green bananas, starfruit, hot chili, etc. and the sweet and sour dipping sauce. 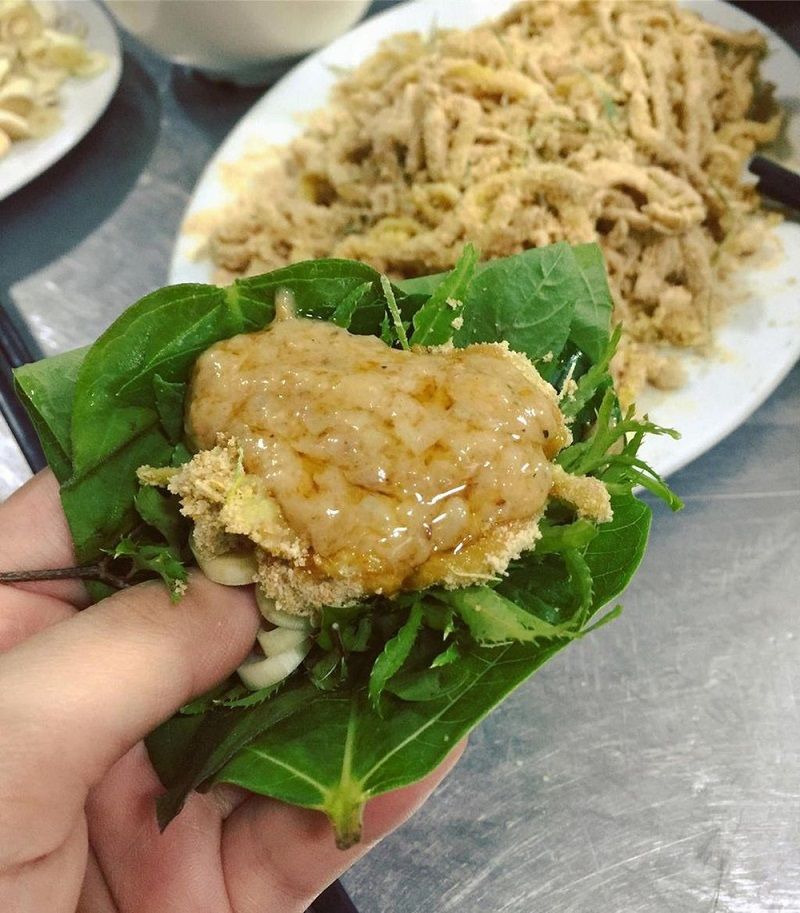 Enjoying each piece of salad rolled in a wide variety of leaves with attractive dipping sauce and then chewing thoroughly, you will be able to feel the sweet and sour taste of the dipping sauce, the crispness of fish meat, and the acridness of raw vegetables, which can leave you a strong impression right from the first taste.

Thai Binh is peaceful and idyllic, so the specialties here are not sophisticated but still have their own characteristics. Enjoy the above-mentioned dishes and you will have unforgettable memories about the cuisine of “the land of rice”.