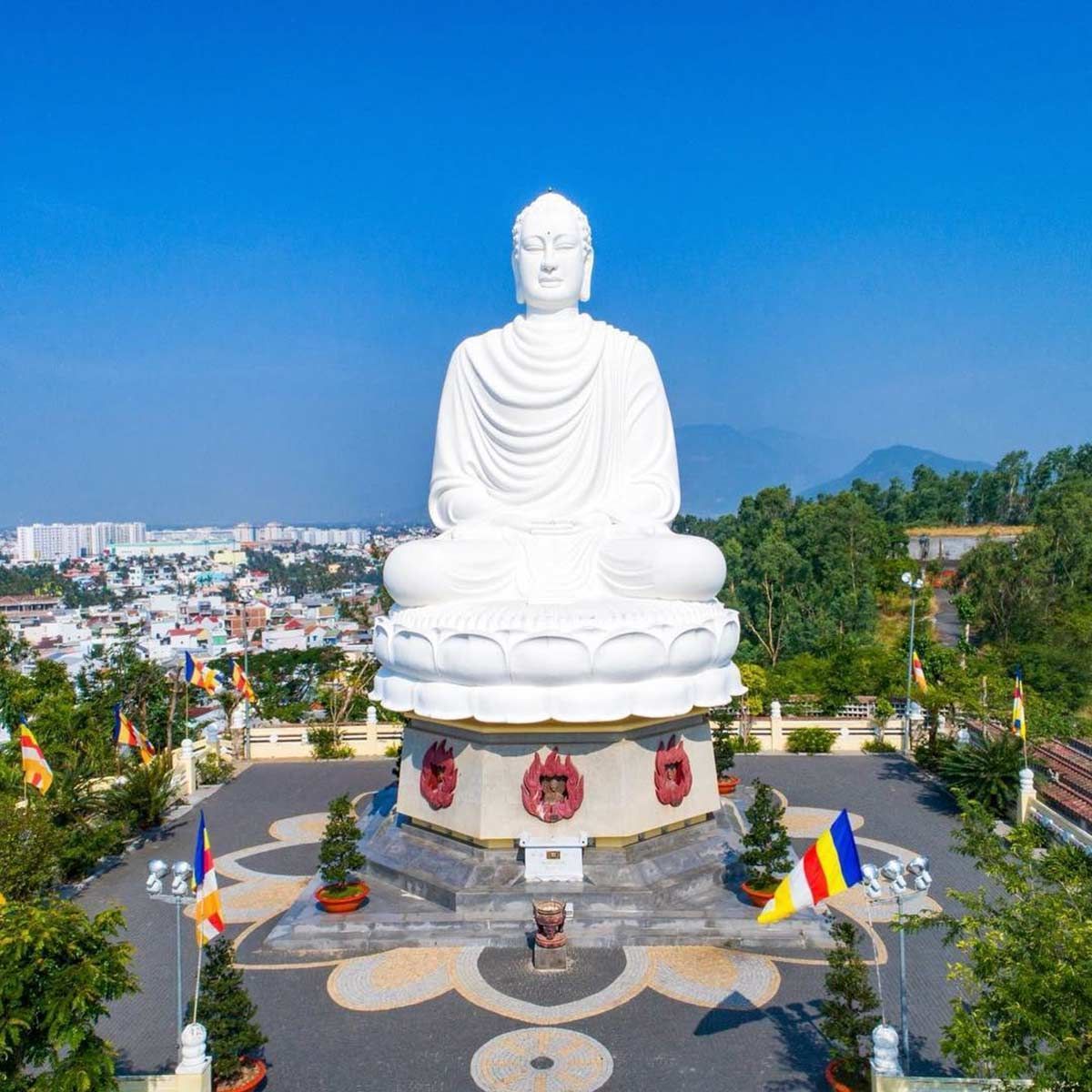 Long Son is not only an ancient pagoda which is more than a hundred years old, but it also has the largest outdoor Buddha statue in Vietnam. This is an attractive cultural destination you should not ignore when coming to Khanh Hoa.

How was Long Son Pagoda constructed?

Long Son, also known as the White Buddha Pagoda, is located at No. 22, 23 Thang Muoi street, Phuong Son Ward, Nha Trang city, Khanh Hoa province. Previously, the pagoda was called “Dang Long”, which was built 134 years ago and is now one of the famous ancient pagodas in Khanh Hoa. 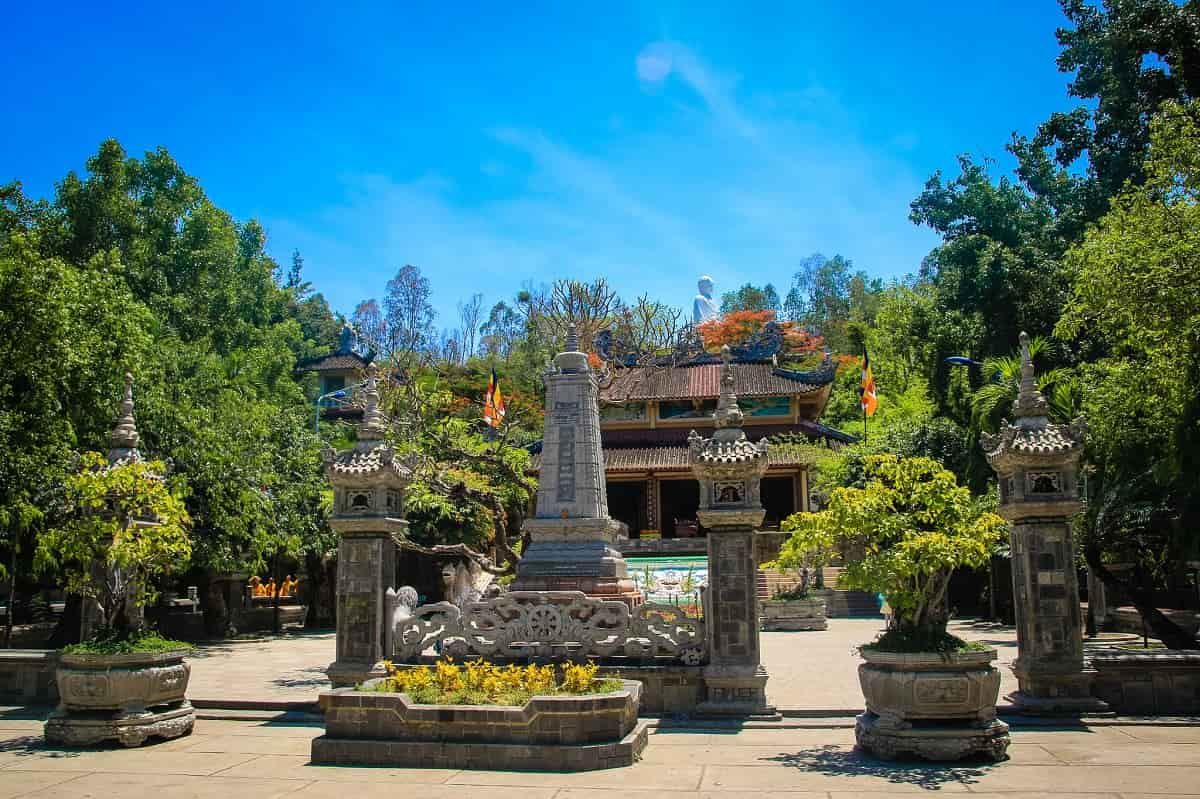 Long Son was constructed by monk Thich Ngo Tri (born in 1856 - Thien Lam Sect) in 1886. Legend has it that at first, the pagoda was just a cottage located on top of Trai Thuy hill. In 1900, the pagoda collapsed due to a storm, so the founder decided to relocate it onto the foot of the mountain and change its name to “Long Son”. In 1936, according to the will of Venerable Ngo Tri, the pagoda was transferred to An Nam Association of Buddhist Studies to serve as the headquarters for the revival of Buddhism in Khanh Hoa province. Up to now, it is the provincial headquarters of the “Buddhist Sangha of Vietnam”in Khanh Hoa. 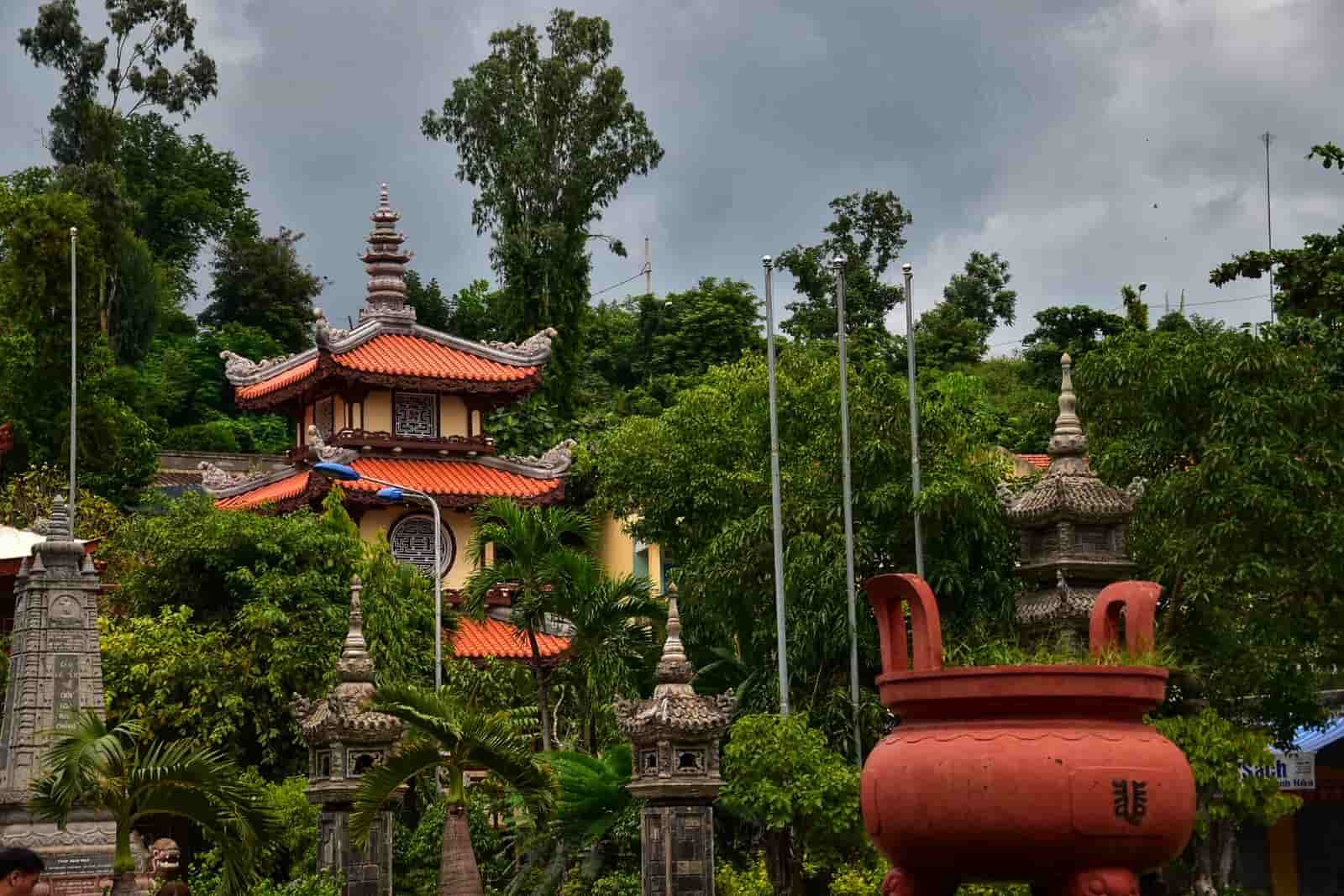 The pagoda campus has many green trees. Photo: nhatrangtoday

In 1938 (the 14th year of Bao Dai reign), the pagoda was awarded the title "Sac Tu Long Son Tu". In 1941, the pagoda was restored by President Ton That Quyen and Buddhist Vo Dinh Thuy. In 1968, the pagoda's roof collapsed due to the influence of wars. In 1971, the pagoda was renovated by Venerable Thich Thien Binh. By 1975, the restoration was only about 60% completed according to the design of architect Vo Dinh Diep.

The architecture of Long Son Pagoda

Long Son Pagoda is famous for its majestic scale and architecture with an area of more than 3,000 square meters and the main material of agarwood to create a calm and peaceful atmosphere. The pagoda includes a main hall and many large outdoor Buddha statues. 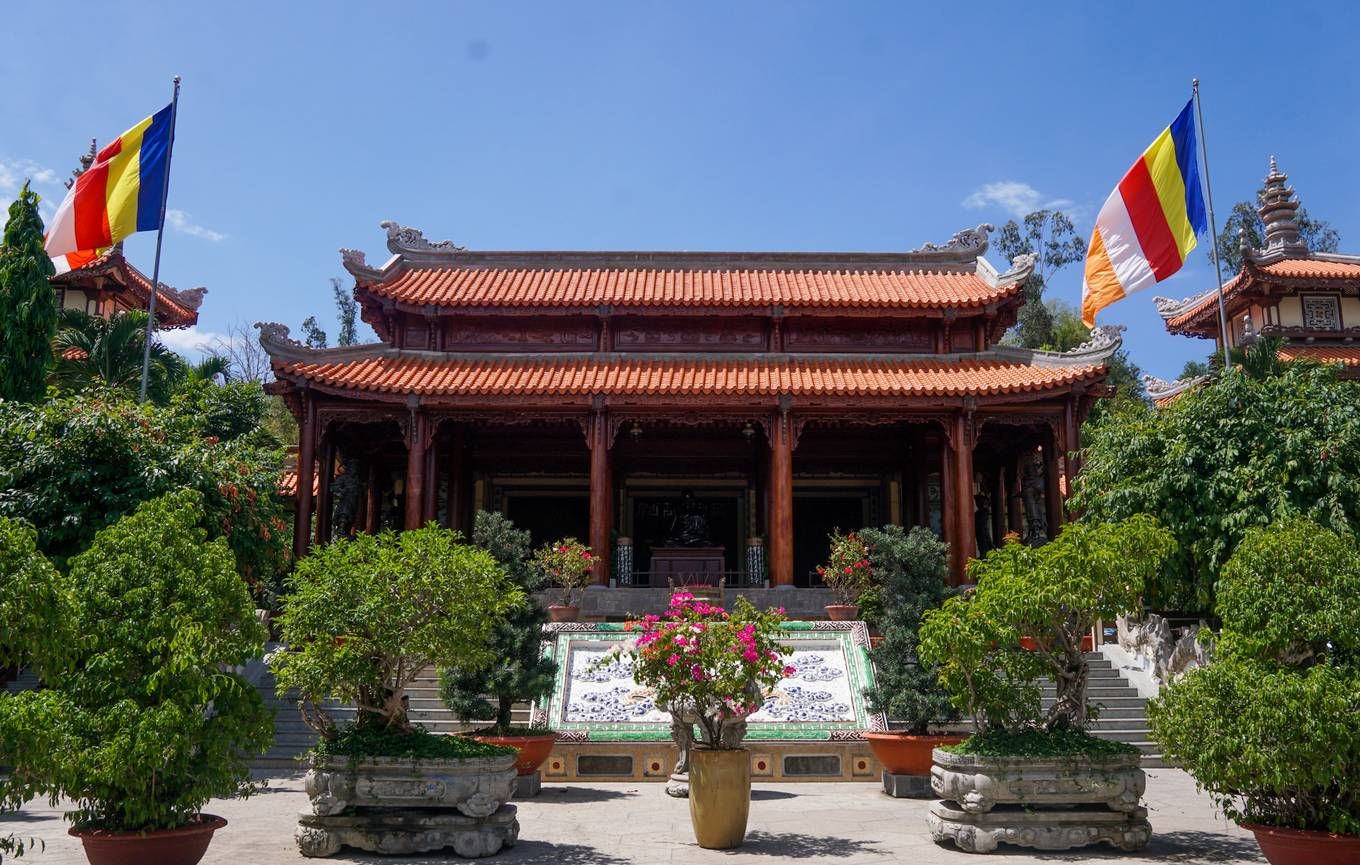 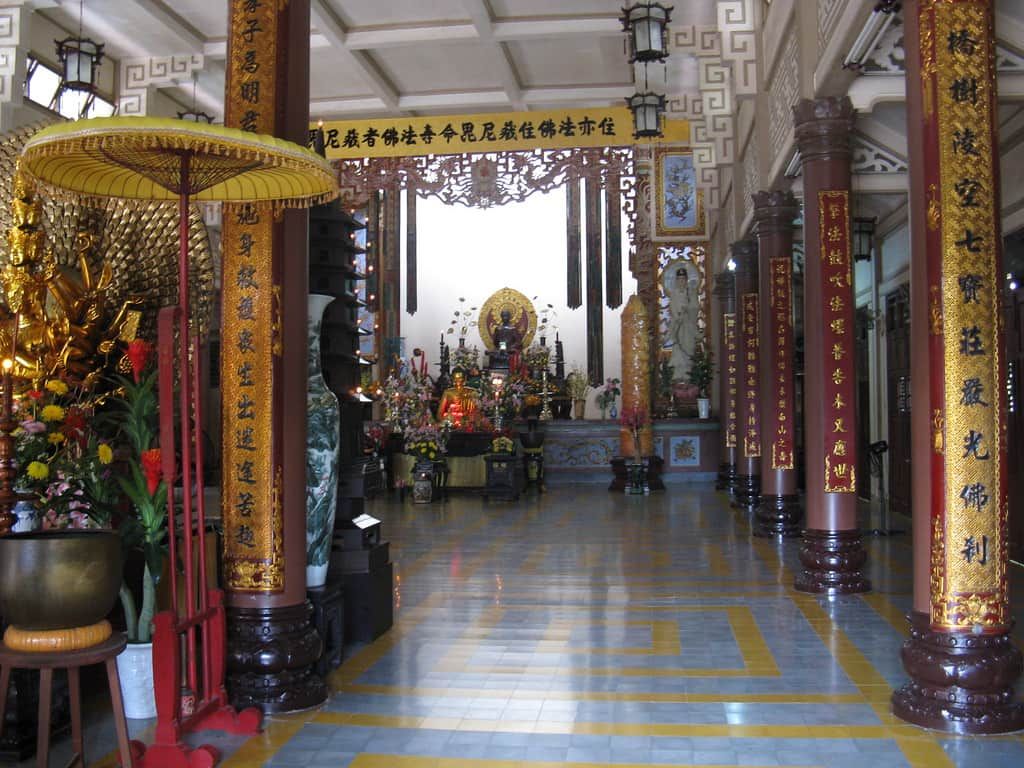 The space inside the main hall. Photo: nhatrangtoday 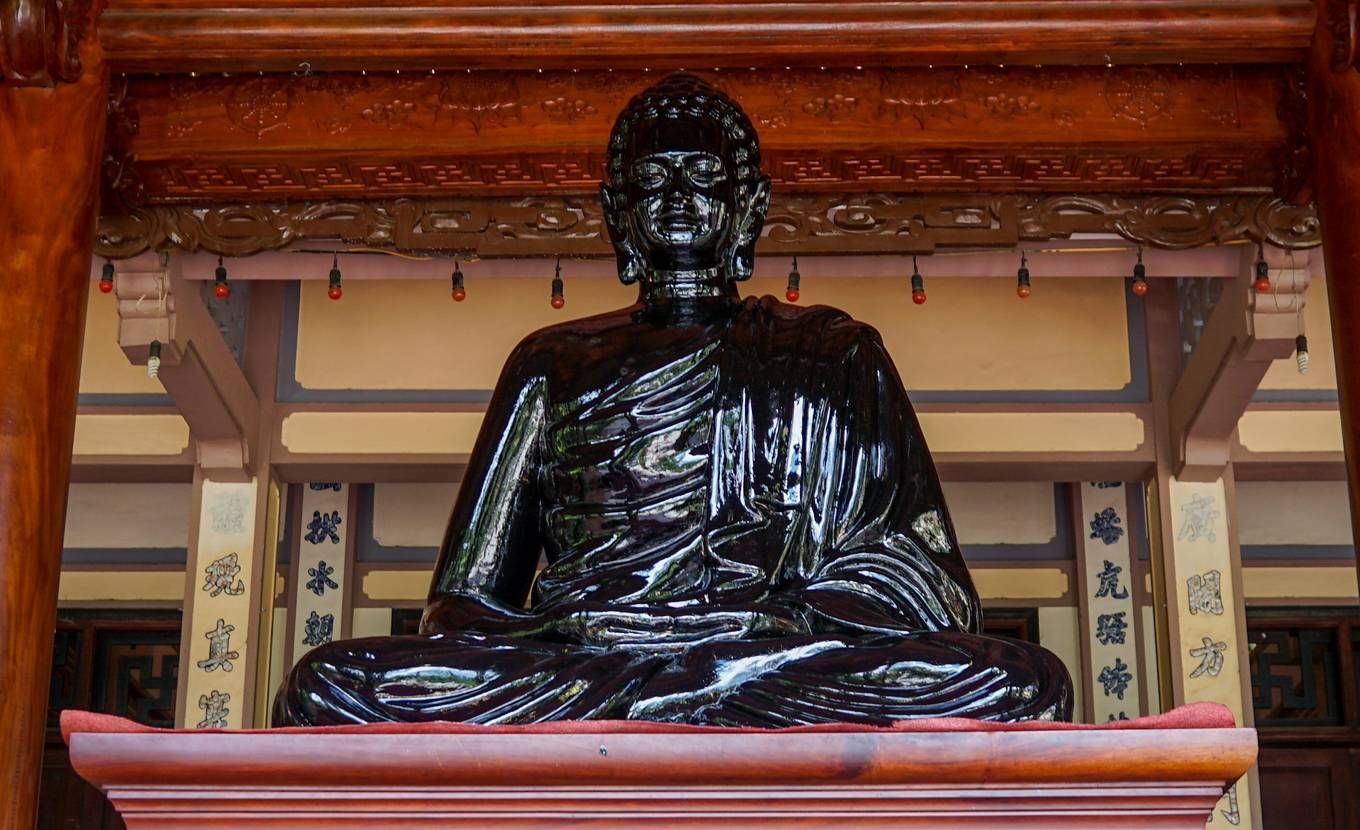 In the middle of the main hall is a 700kg statue of Shakyamuni Buddha preaching Dharma. Photo: cungphuot

The main hall of Long Son pagoda, which covers an area of 1,670m2, is located in the middle of the campus with an open design and is also decorated in a solemn way. The statue of Buddha Shakyamuni preaching Dharma (with a weight of 700kg and a height of 1.6m) is also located in the middle of the main hall - which is the venue of ceremonies on the 1st or 15th lunar day, or on other important days. In front of the main hall is an altar with statues of Bodhisattva Maitreya, Bodhisattva Mahasthamaprapta and Bodhisattva Avalokitesvara. In the pagoda, there is also a pair of Vietnamese record-breaking candles with a weight of 900kg designed by Venerable Thich Hien Chon. 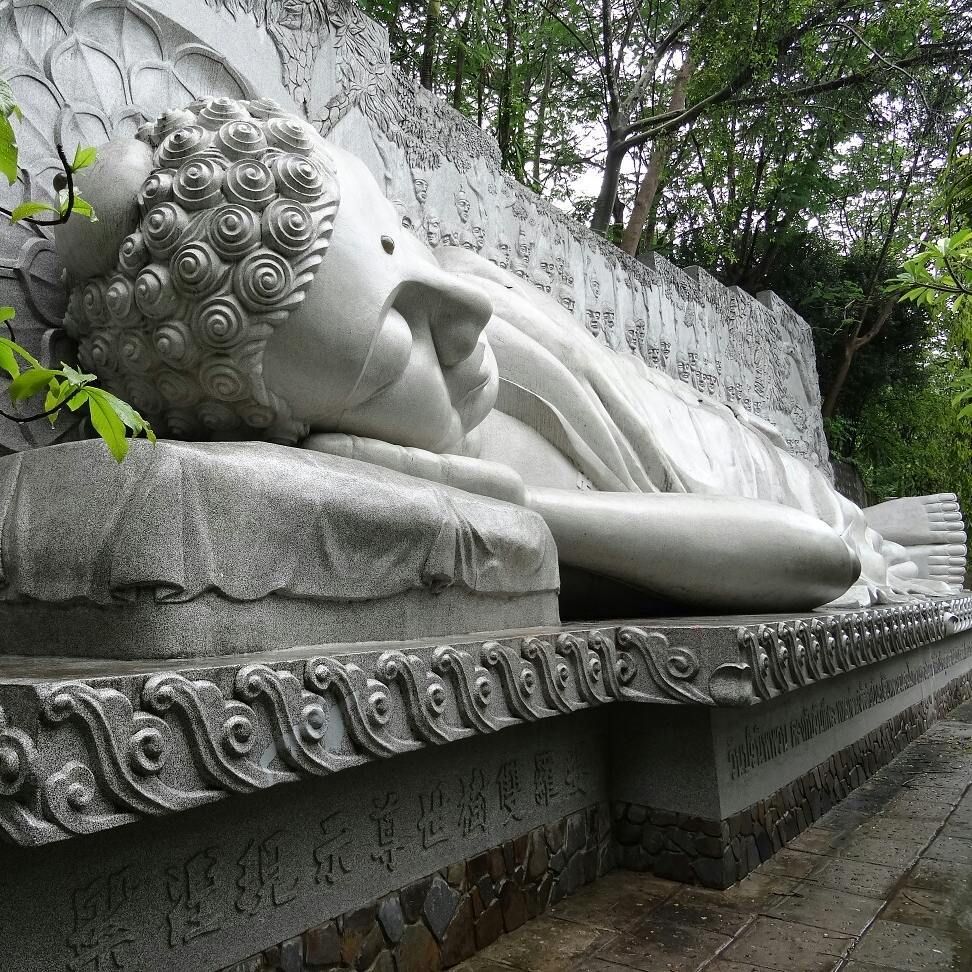 At the 44th three-step step, there is a statue of Buddha attaining nirvana with a height of 5m, a length of 7m, and a relief of thousands of bhikkhunis reciting Buddhist chants. Photo: @goosentim.

On the way to the top of the hill (on the right of the pagoda), there are 193 three-step steps which are likened to loyalty and belief in Buddhism, which means that “you have to go through hardships to attain enlightenment”. At the 44th three-step step, there is a statue of Buddha attaining nirvana with a height of 5m, a length of 7m, and a relief of thousands of bhikkhunis reciting Buddhist chants. Long Son Pagoda also has a bell tower, where there is a bell donated by Buddhists in Hue, with a weight of 1.5 tons and a height of 2.2m. Every time this bell rings, the whole space of the pagoda becomes solemn despite its location on a busy road. 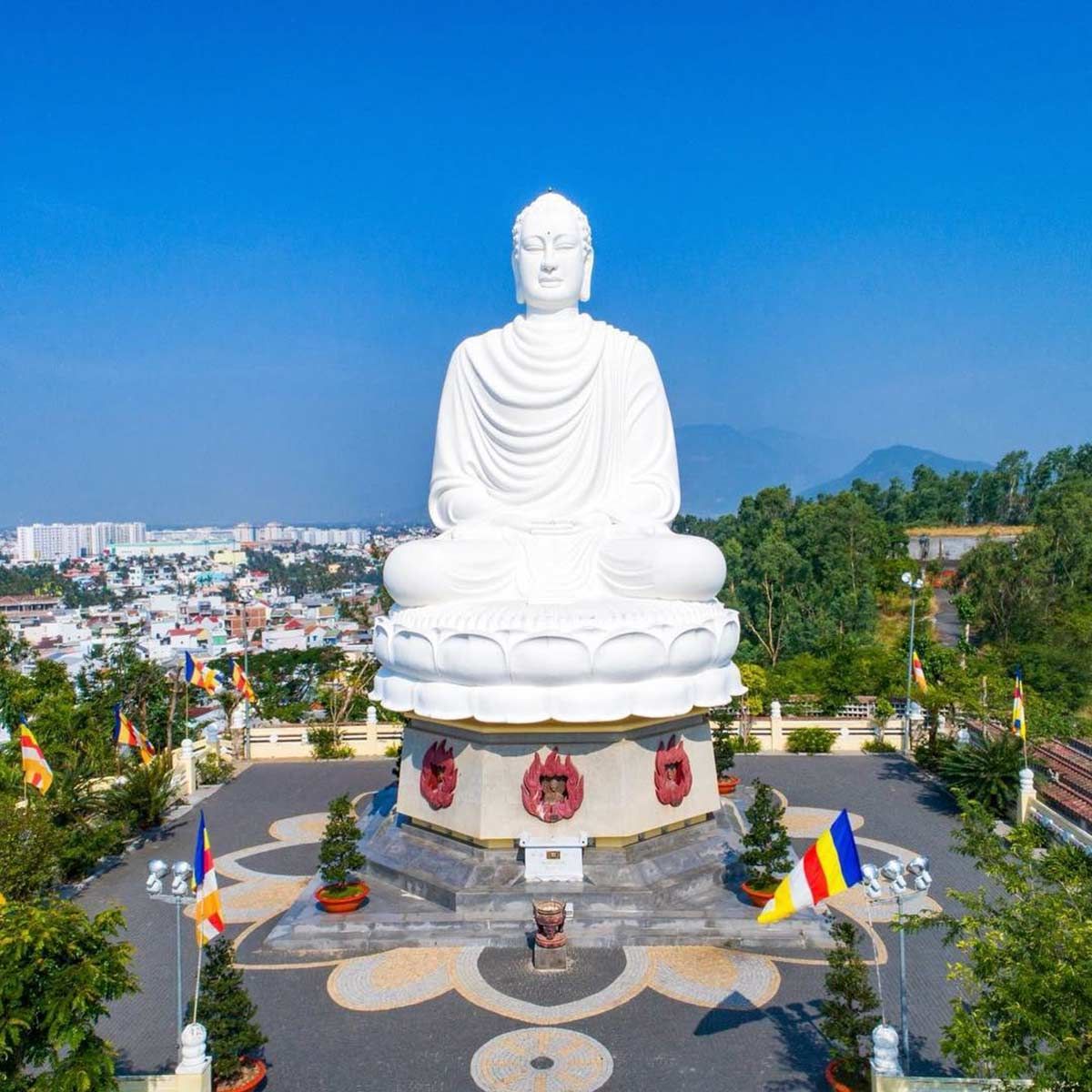 The statue of “Kim Than Phat To” is the largest outdoor Buddha statue in Vietnam. Photo: tripu

The most impressive and unique feature of the pagoda is the statue of “Kim Than Phat To” (the white Buddha statue) sitting and preaching Dharma, with a height of 24m. The statue was constructed in 1963 at the top of the hill, right on the foundation of the old Long Son pagoda. The Guinness Book of Vietnam Records recognized this as "the largest outdoor Buddha statue in Vietnam." That is why in Khanh Hoa, there are folk songs about this majestic Buddha statue:

"Who comes to visit Khanh Hoa

Remember to go to Long Son and Thap Ba

Do not forget the name of Kim Than Phat To

And look at the white Buddha in the sky." 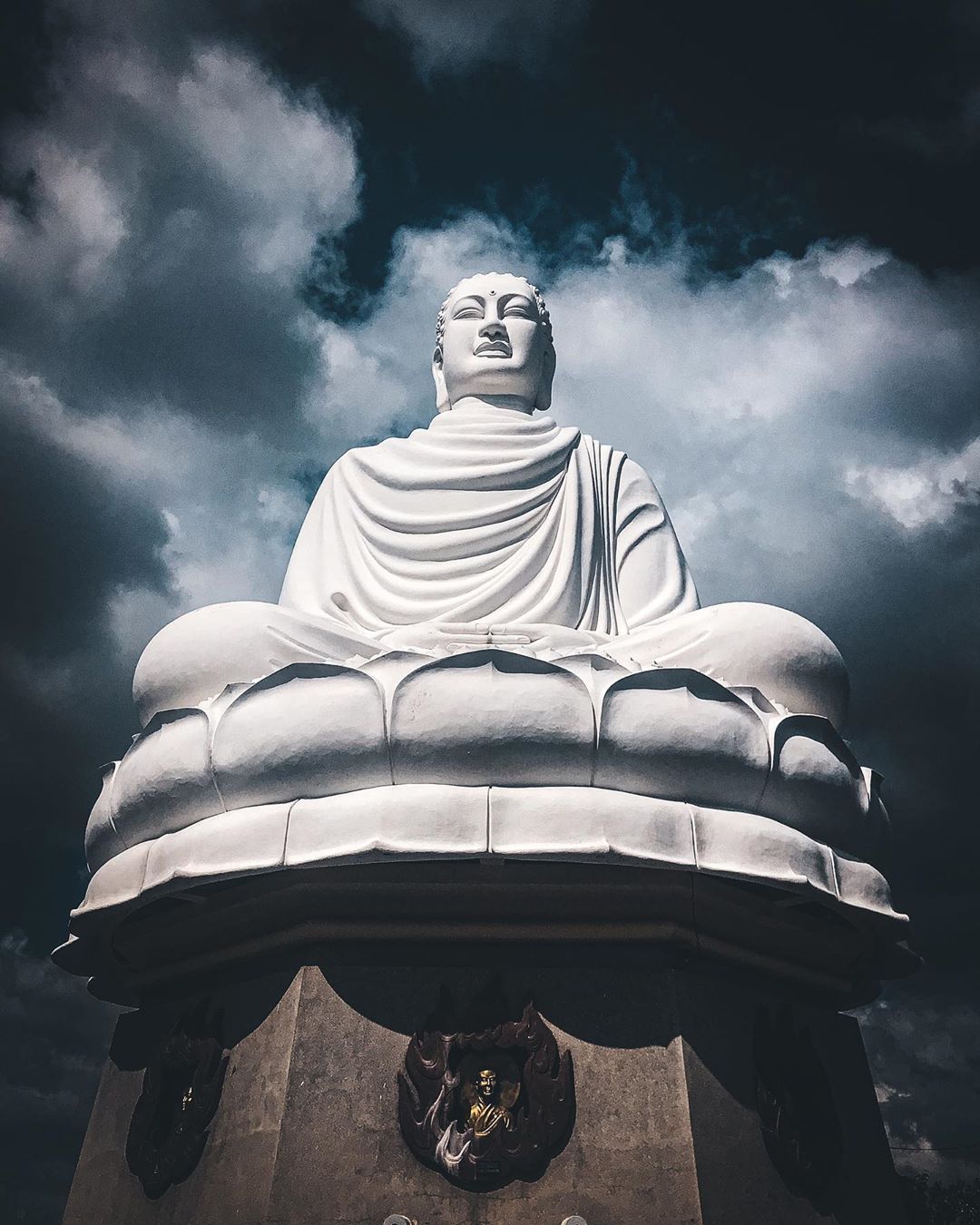 The Buddha statue was built upon the request of the Venerable Thich Duc Minh in 1964 and completed in 1965. With a height of 24m and a 10m lotus flower, the Buddha statue stands out in the sky with a serene smile. Around the lotus pedestal, there are small statues of Kim Than Phat To with portraits of Venerable Thich Quang Duc and 6 other monks. The pedestal of the statue is hollow with small bronze Buddha statues inside. In front of the statue of Kim Than Phat To is a pair of dragons with a length of 7.2m, which are very majestic. 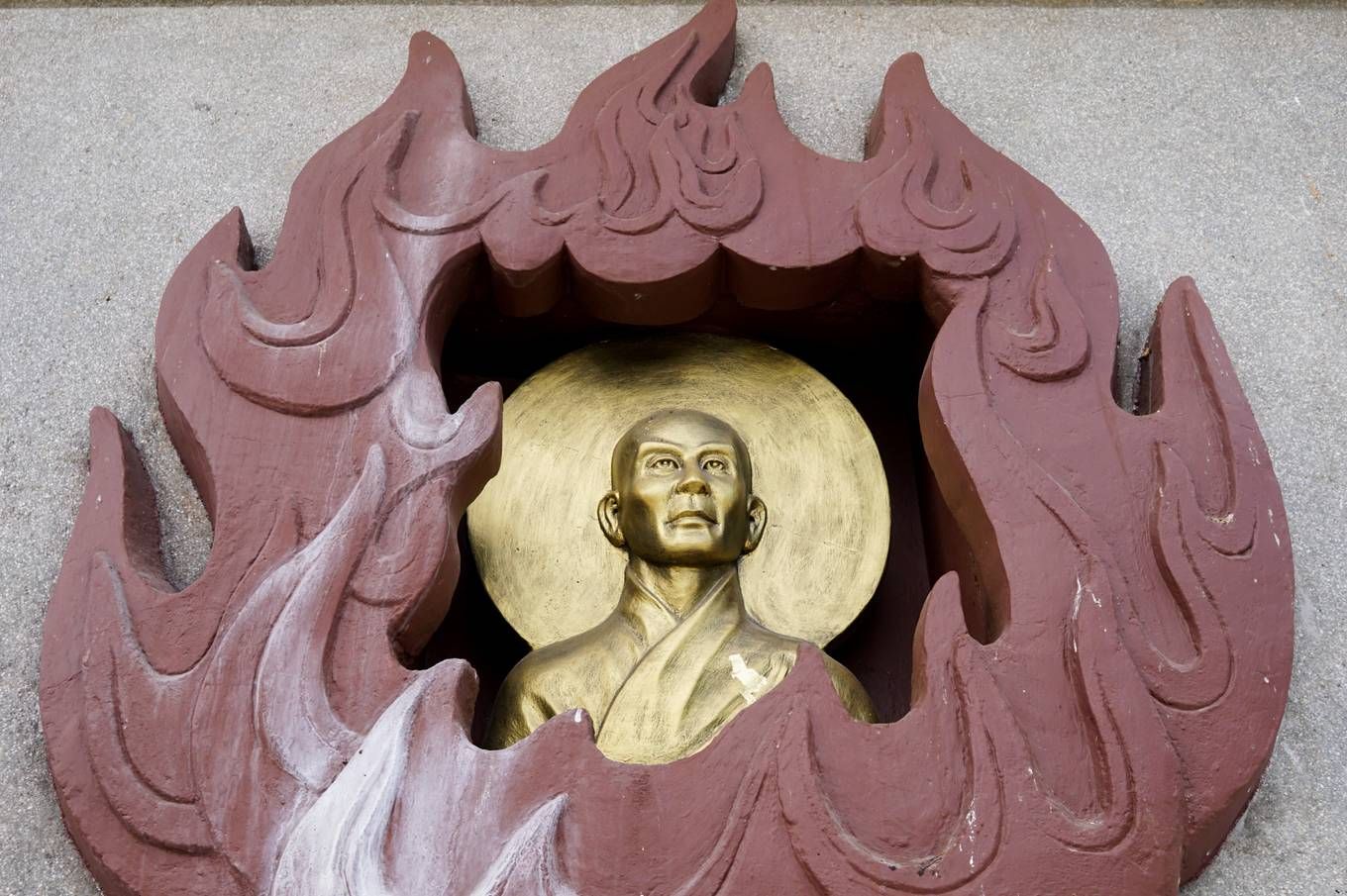 Around the lotus pedestal, there are small statues of Kim Than Phat To with portraits of Venerable Thich Quang Duc and 6 other monks. Photo: cungphuot 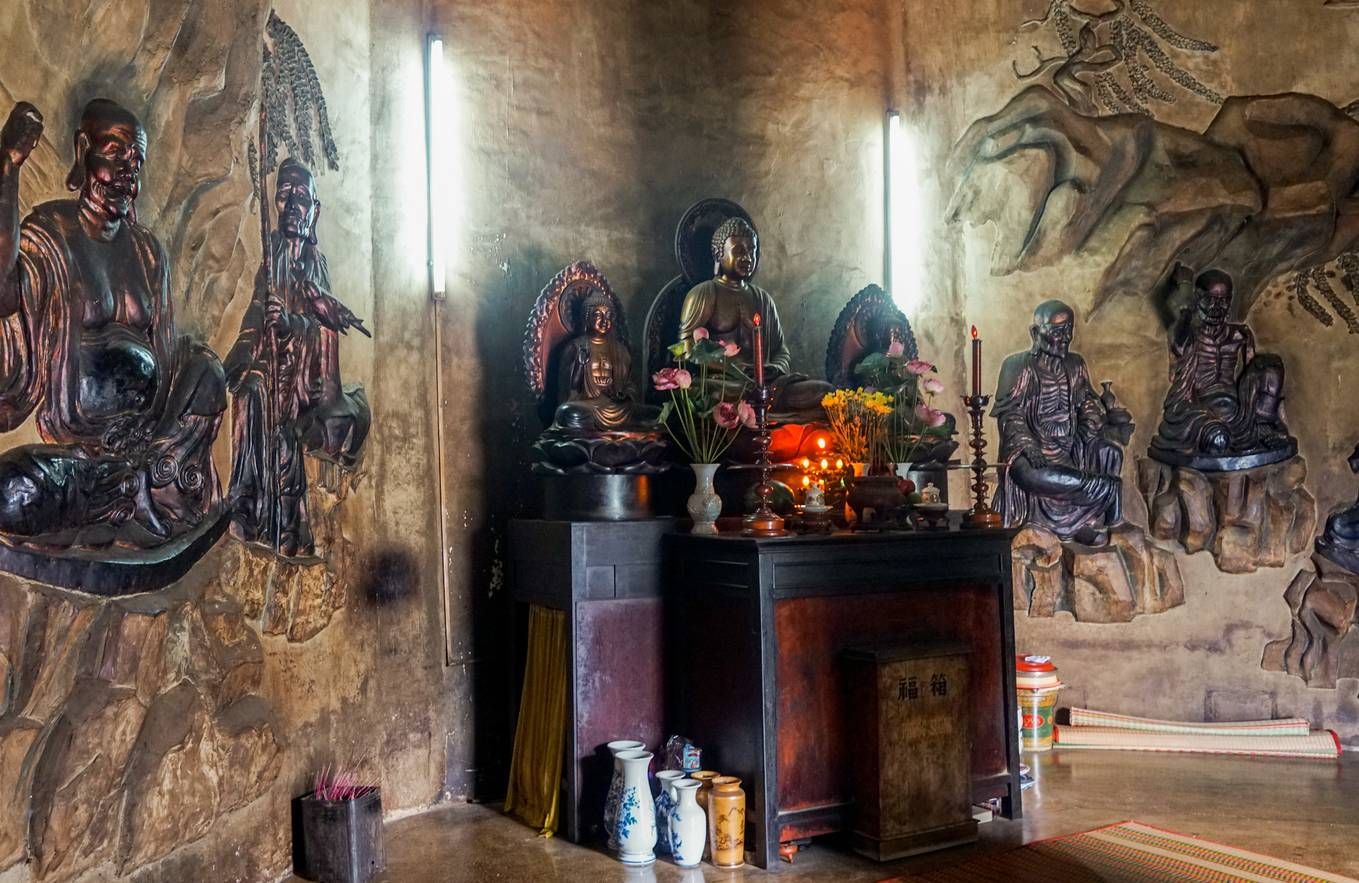 The pedestal of the statue is hollow with small bronze Buddha statues inside. Photo: cungphuot

For the people of Nha Trang, the Buddha statue has great spiritual significance as they perceive that it is protecting the people of the city and bringing luck.

Established 134 years ago, Long Son Pagoda is one of the ancient pagodas in Nha Trang that attracts many tourists thanks to its peaceful but solemn space. When coming here, you will definitely have moments of relaxation, but can't avoid being overwhelmed by the huge outdoor Buddha statue that can't be found anywhere else.