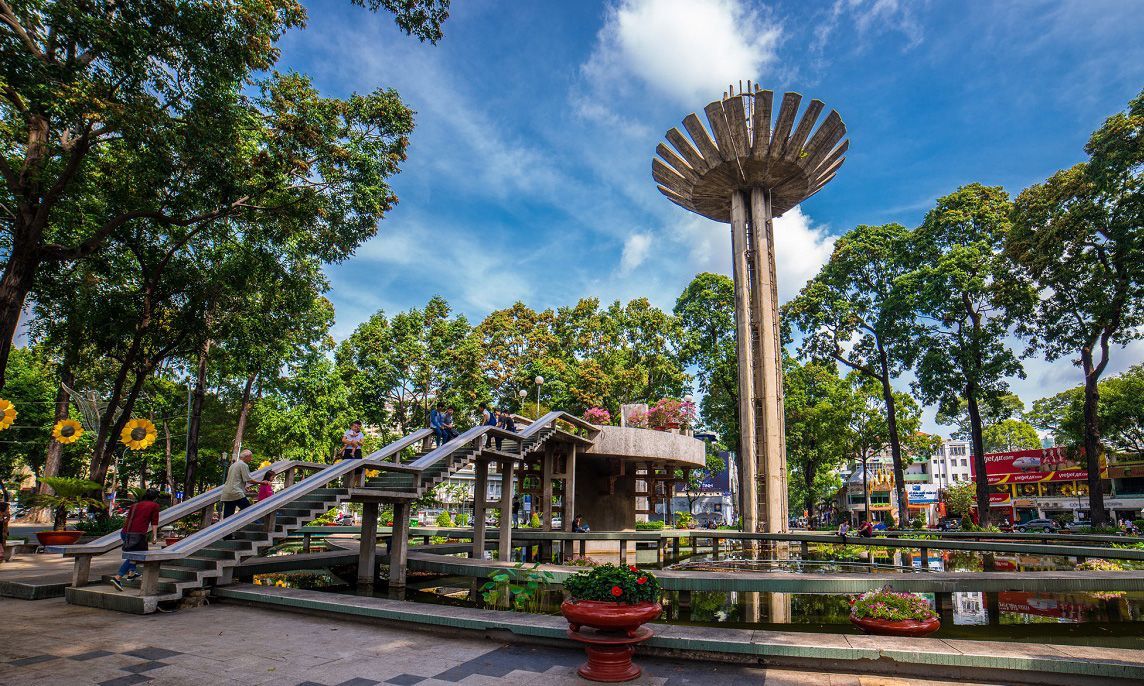 Interesting anecdotes about the Turtle Lake in the heart of Saigon

Turtle Lake is one of the destinations that attracts both locals as well as tourists in Ho Chi Minh City thanks to its unique architecture and open space, however, few people know of the interesting historical stories about it.

The location of Turtle Lake

The official name of the Turtle Lake is “International Square”, which is located in District 1, Ho Chi Minh City and at the intersection of three roads, namely Vo Van Tan, Pham Ngoc Thach and Tran Cao Van. 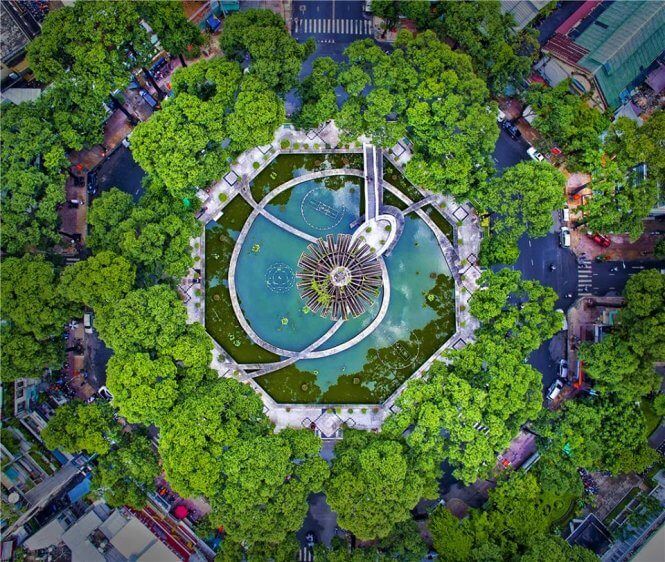 Seen from above, Turtle Lake is a roundabout. Photo: Vntrip

The history of Turtle Lake and its interesting anecdotes

The area around Turtle Lake is currently very bustling with a wide variety of shops operating from early morning to late evening, which is a typical feature of modern life, however, this place has had many interesting anecdotes that have made many people curious. 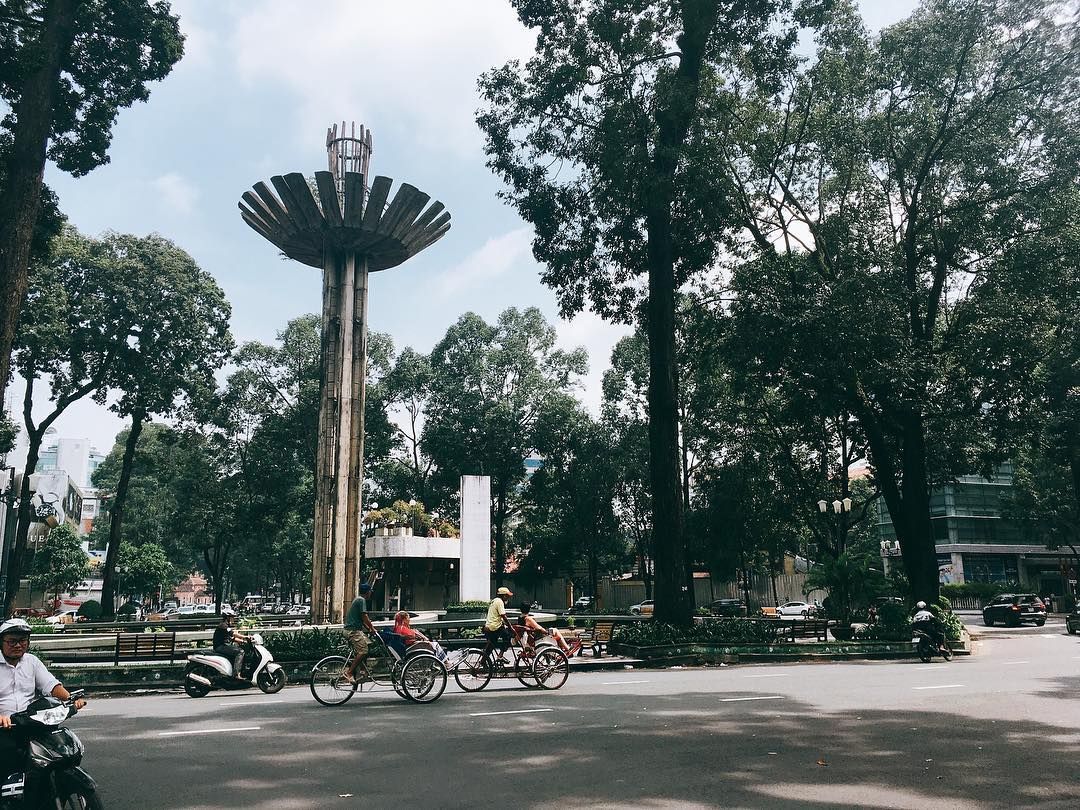 The construction of the Turtle Lake in the Nguyen Dynasty

In 1790, Turtle Lake was at the location of the Kham Khuyet gate of Bat Quai citadel. After many rebellions, King Minh Mang commanded to destroy Bat Quai citadel and build a smaller one called “Phung citadel”, which was later renamed “Gia Dinh”.

The Turtle Lake during the French colonial period 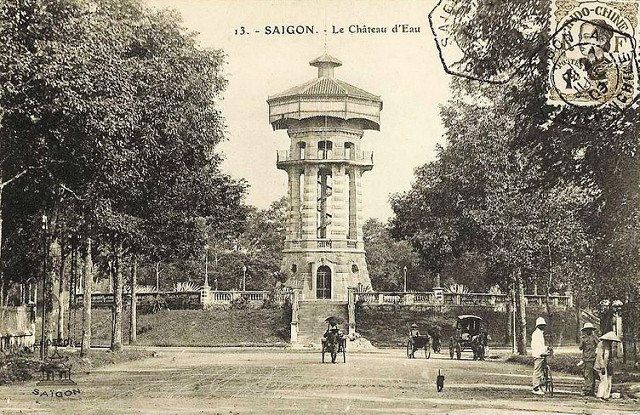 A photo of the water tower in the Turtle Lake area in the early 20th century. Photo: tuoitre

During the French colonial period, the French colonialists occupied Gia Dinh citadel and razed it in 1859. The French began to rebuild the city as well as built a water tower at the current location of Turtle Lake in 1878 to provide water for residents. In 1921, due to the limited capacity of supplying water, the water tower was demolished and it became the intersection as it is today. The intersection was originally named “Ba Hinh Square” by the French with a monument consisting of three French soldiers. After the government of the Republic of Vietnam demolished it, the name was changed to “Chien Si Square”. 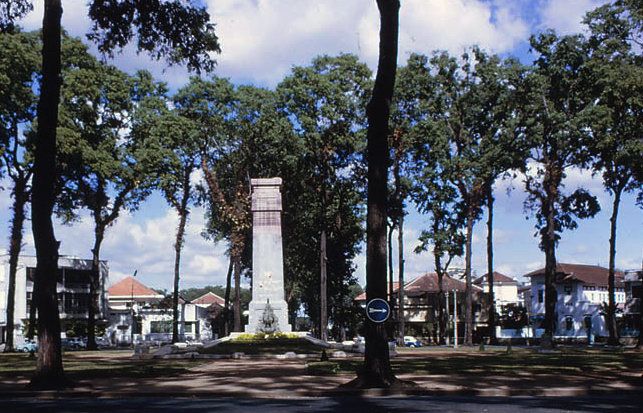 Chien Si Square (known as International Square now) in 1960. At that time, Turtle Lake was small and not as big as it is today. Photo: tuoitre

During the time of the Republic of Vietnam

After the French withdrew from Vietnam, the Turtle Lake was restored and rebuilt in 1965 by architect Nguyen Ky. From 1970 to 1974, it was continuously renovated with five more tall concrete pillars in the form of a hand spreading five fingers out to support a small concrete pistil inside. 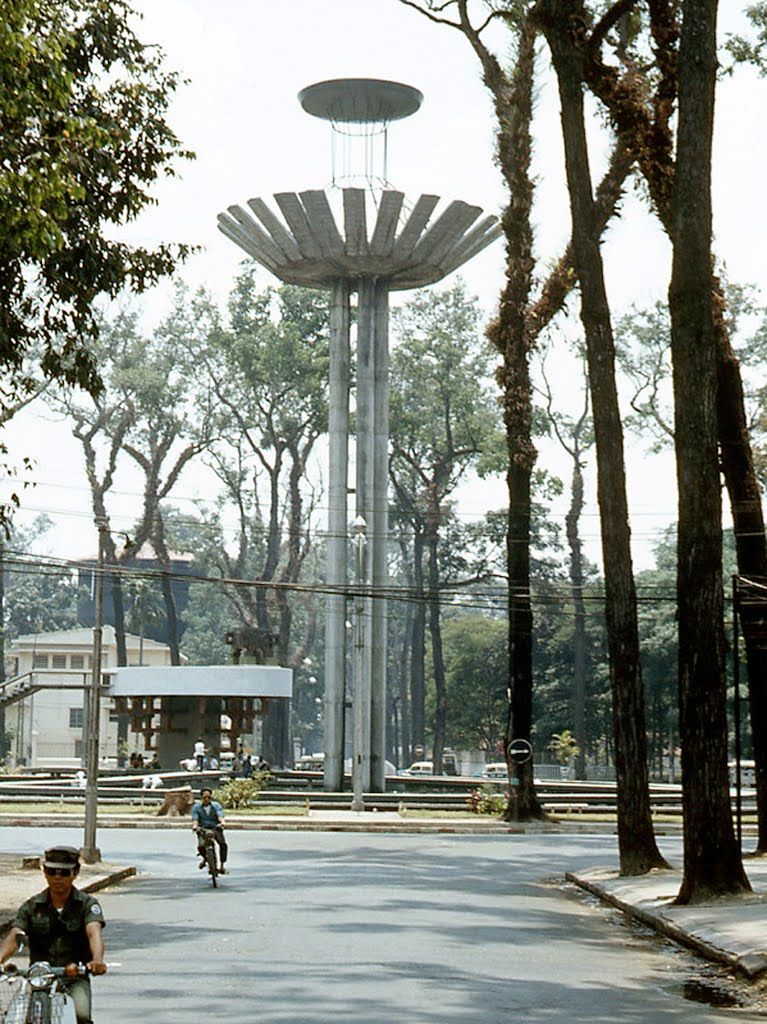 The Turtle Lake in the early days when it was rebuilt. Photo: Google site 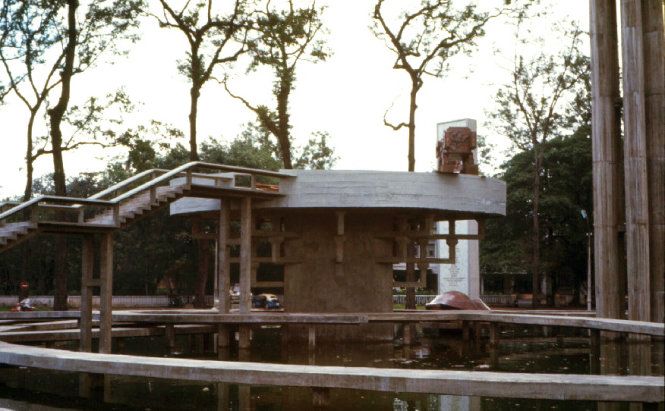 After the construction is complete, the Turtle Lake has a copper alloy turtle under the concrete stele; the turtle's head faces the round concrete pillar in the middle of the lake, towards Notre Dame Cathedral. Photo: tuoitre 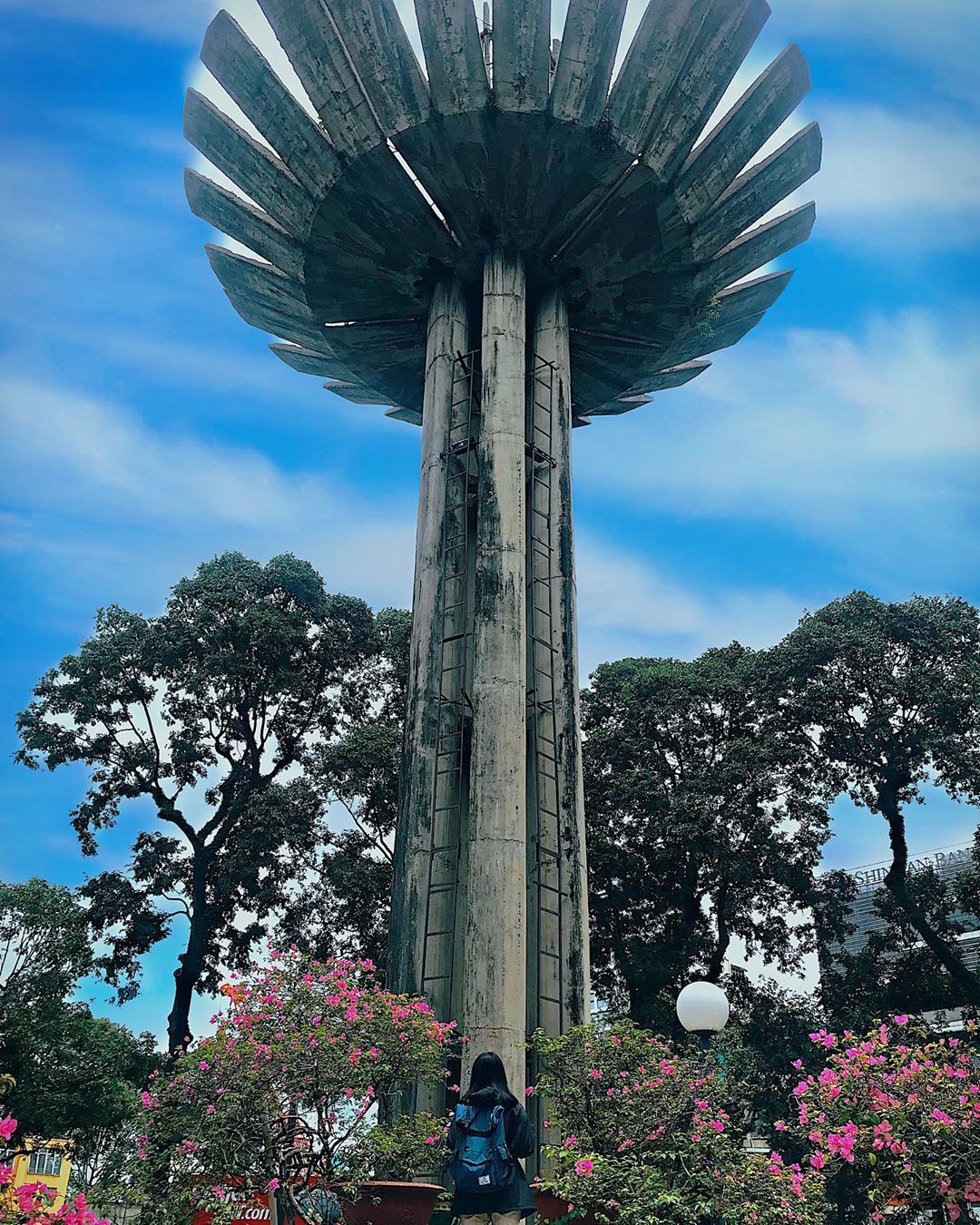 It was rebuilt according to the design of architect Nguyen Ky. Photo: @damhoaboo

Surrounding the tower area is a roundabout as it is today, decorated with an octagonal fountain, many spiral walkways leading to the memorial, and a turtle figure made of alloy. It is noted that on the back of the turtle, there is a stone stele with the names of countries admitting the Republic of Vietnam. 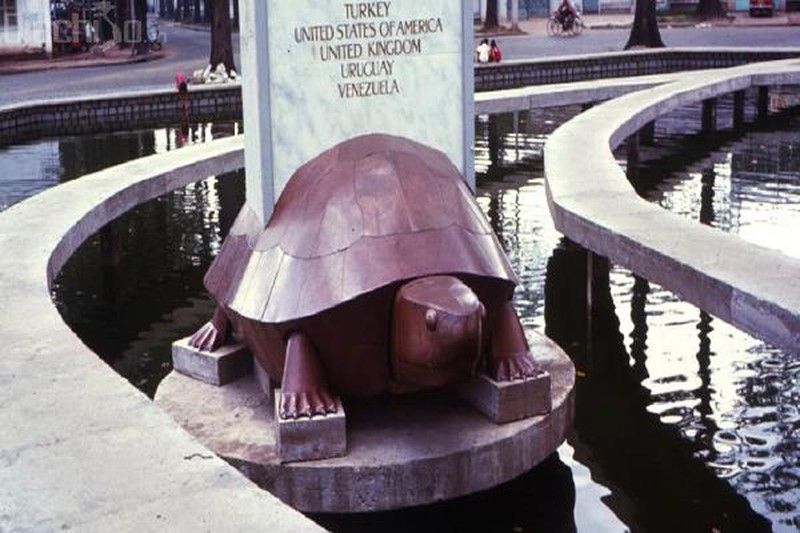 On the turtle's back is a stone stele with the names of countries that admitted the Republic of Vietnam. Photo: kienthuc

The Saigon people who witnessed the changes of Turtle Lake over the years have recounted that the area of Turtle Lake used to be like an “abandoned area” in the middle of a busy city, but since it was reconstructed with modern design by architect Nguyen Ky, the work was attractive to the whole city. 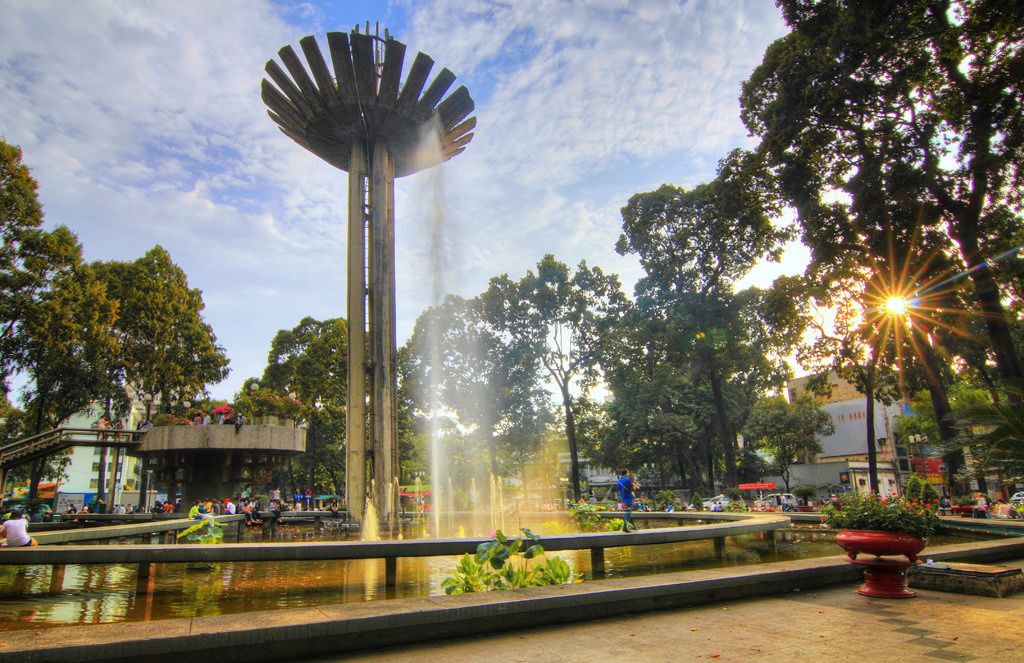 The square is bustling and it is also a place that has stored many beautiful memories of many generations of Saigon people. The lake area is surrounded by many cafes with unique street food and is known as the place with the largest number of trees in Ho Chi Minh City. Currently, Turtle Lake is considered as a park as well as a favorite resting and walking destination of many people, especially the young and tourists coming to Saigon. 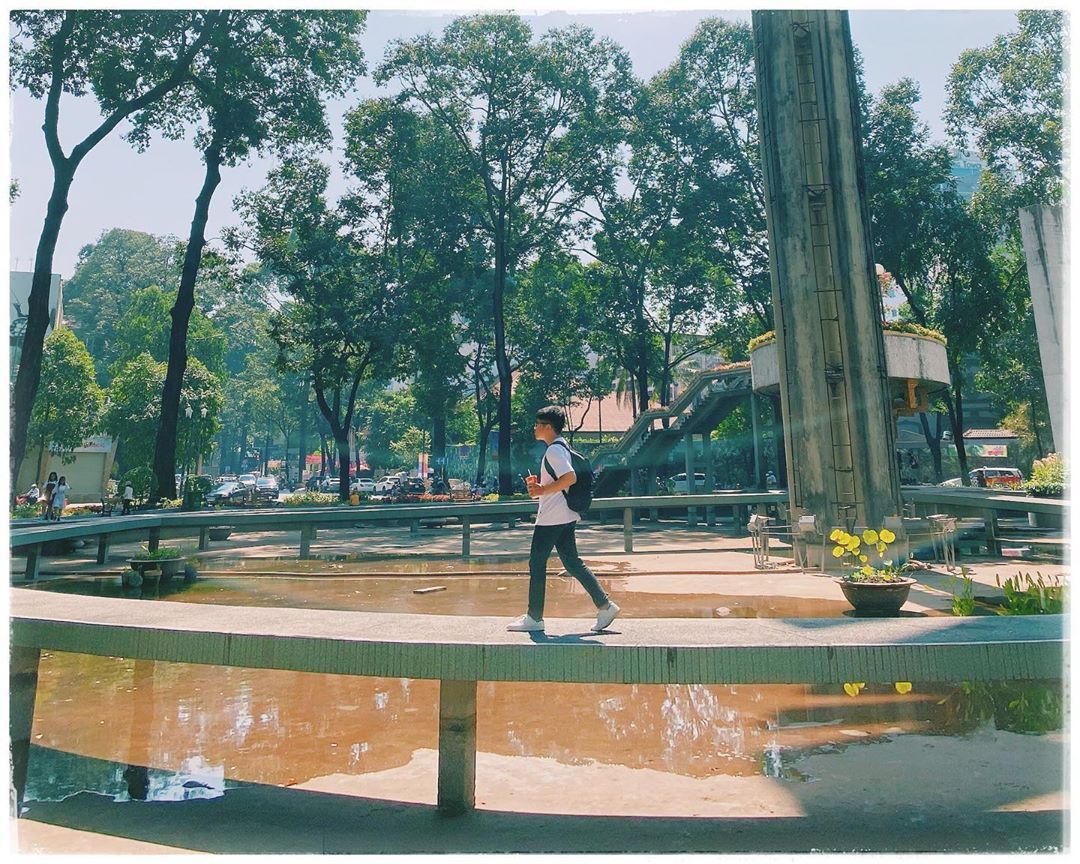 The anecdote of Turtle Lake

In the book "The Turtle Lake Case" (Youth Publishing House, 1982), there are oral anecdotes about this lake. In 1967, General Nguyen Van Thieu became President and invited a feng shui master to see the land at the Independence Palace. This master said that the land at the palace has an extremely lucky position in the shape of a dragon (the lucky mascot in Vietnamese and Chinese traditions), which is a great place to build works. Accordingly, as the dragon's tail is located at the location of the Turtle Lake, it is necessary to cast a turtle here to stabilise the dragon. That is why the Turtle Lake was built like a sword inserted into the lake to hold the dragon's tail. Up to now, Turtle Lake can still retain its original unique architecture and has become an interesting tourist destination. 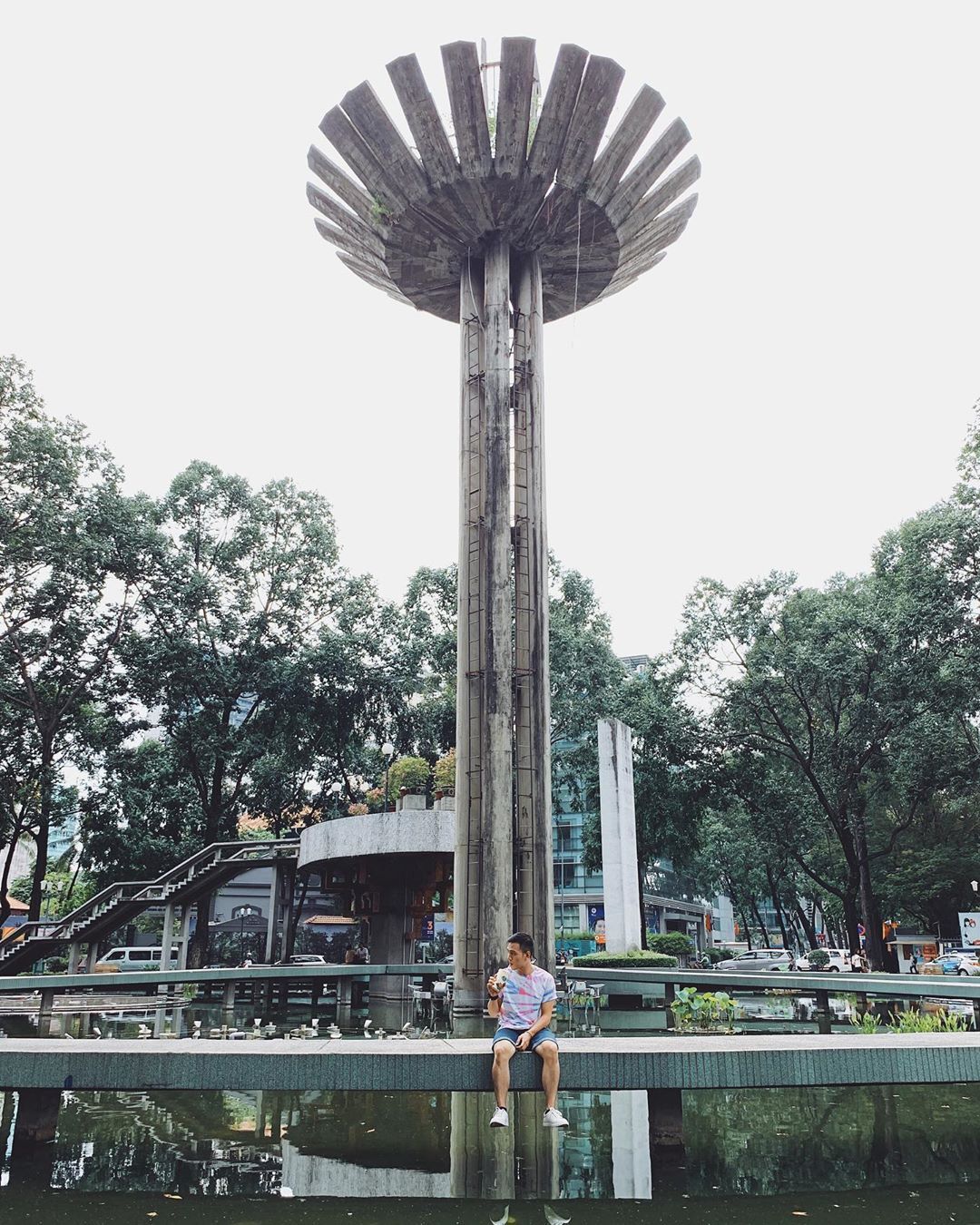 Turtle Lake is associated with the anecdote of feng shui. Photo: @vitquaybackbach

Things you can do at Turtle Lake

As the work is covered by trees and surrounded by a cool lake, tourists or locals often choose to stop at Turtle Lake to rest and chat on hot days. 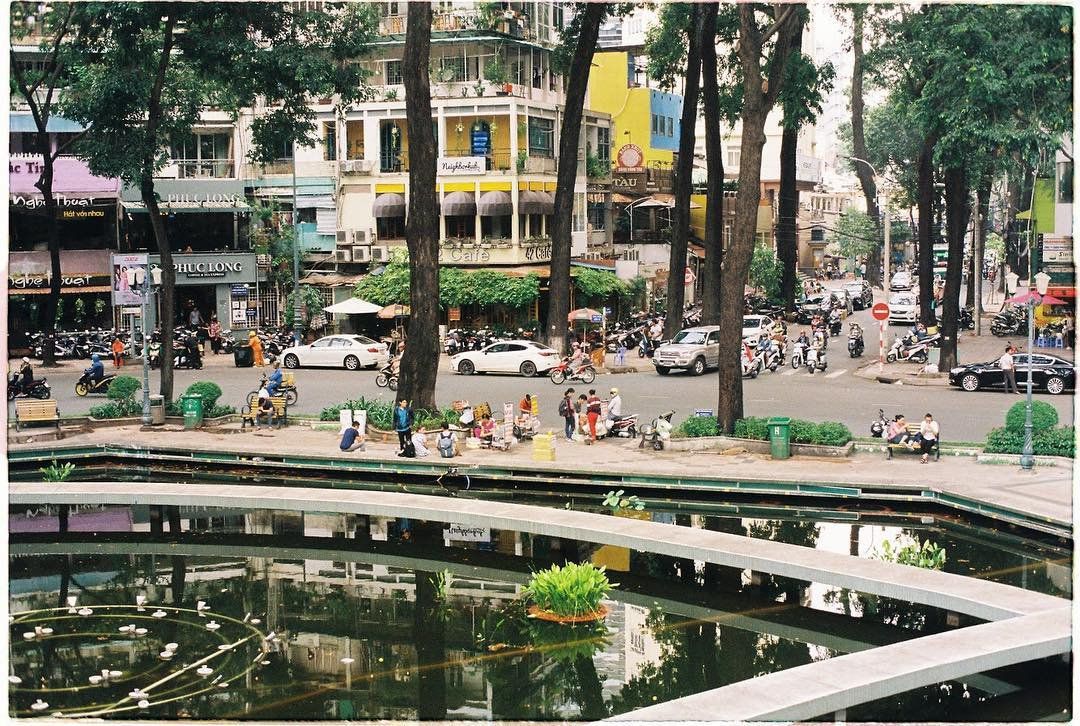 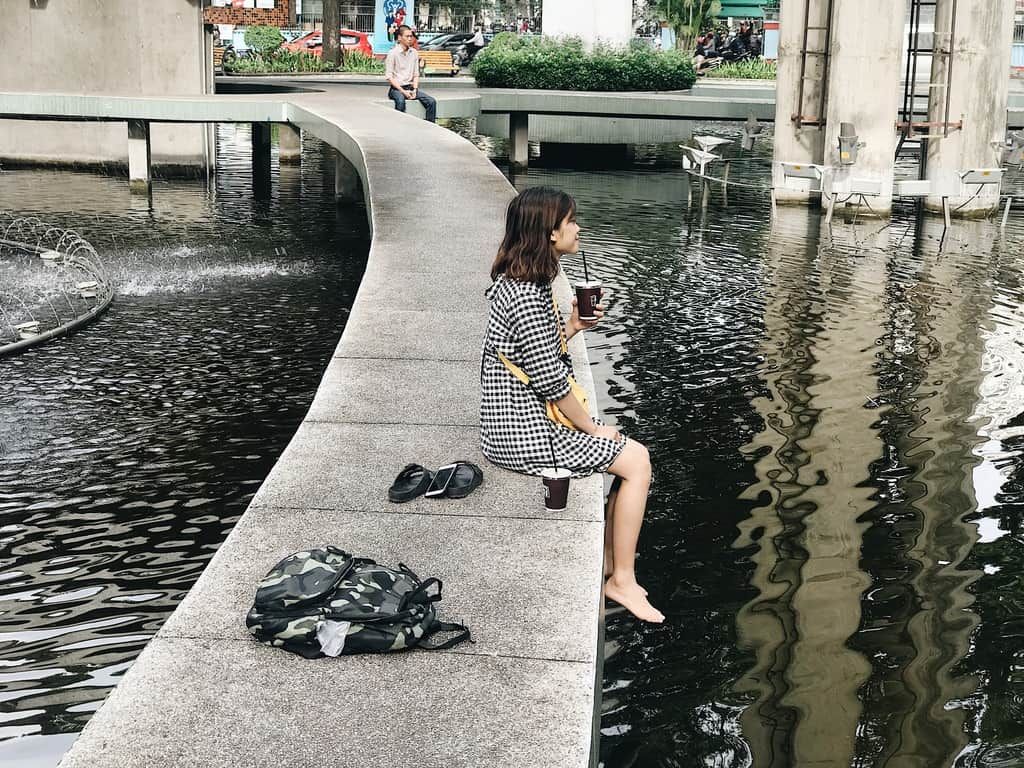 Its open space is very suitable for you to stop to relax and chat. Photo: Block Traveloka

Turtle Lake is regarded as "snack paradise" by young people. Around the lake area, there are many stalls offering typical street food such as: mixed rice paper, grilled rice paper, grilled quail eggs, lemon tea, peach tea, etc. and at a very low price from VND 7,000 - 15,000/serving. The sellers around the lake area are always friendly and hospitable. 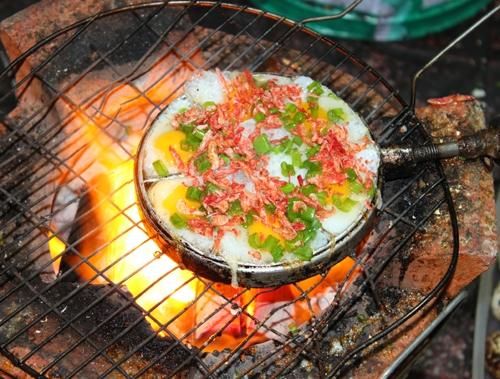 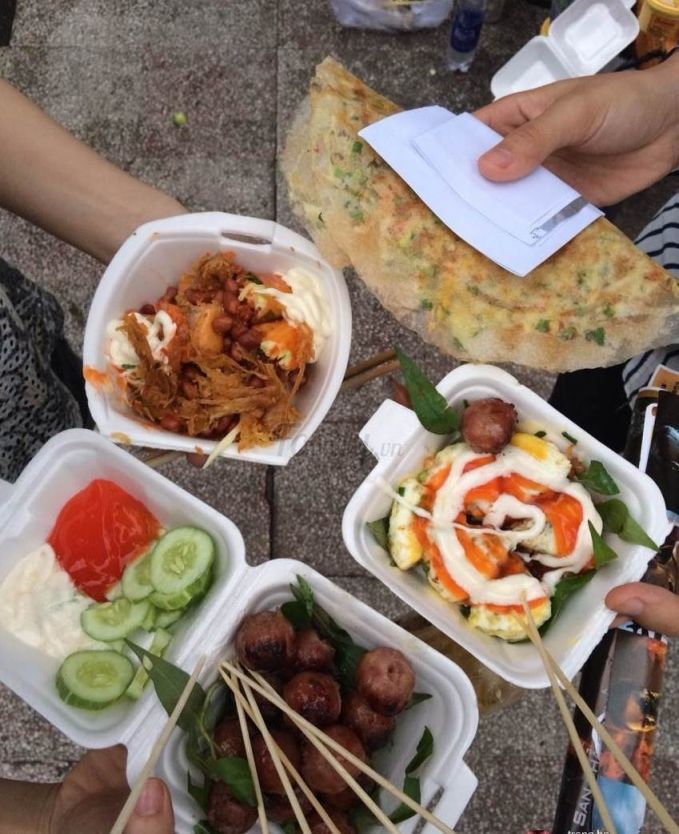 Coming to Turtle Lake in the afternoon, enjoying the open space under green trees, and admiring its unique architecture, you can find peace of mind in the middle of the bustling city. There's nothing better than chatting with friends or reading a book on the bench here. 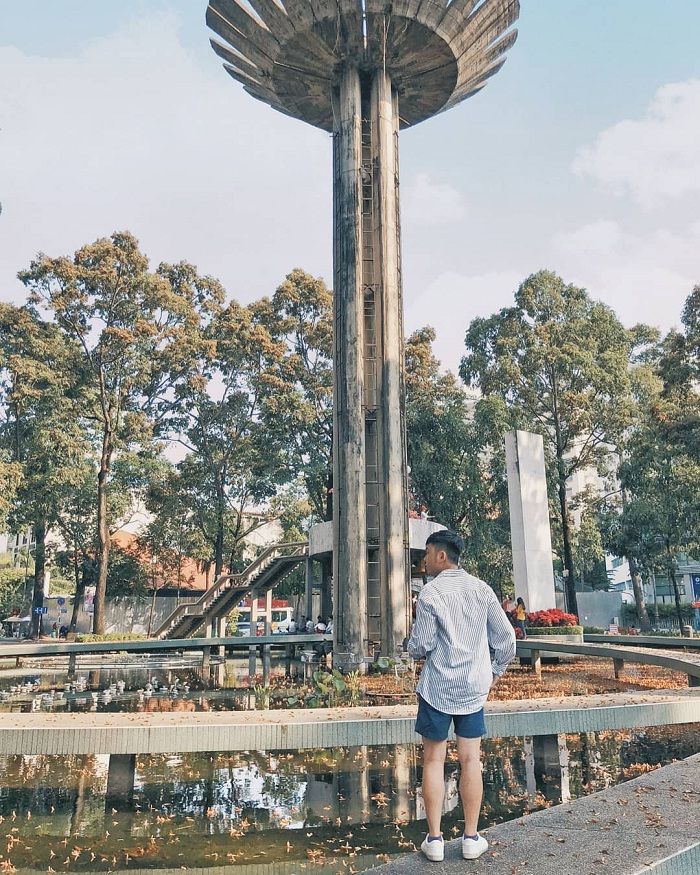 The Turtle Lake area is also a popular dating spot for young couples as it has a quiet and idyllic space in the middle of busy streets. 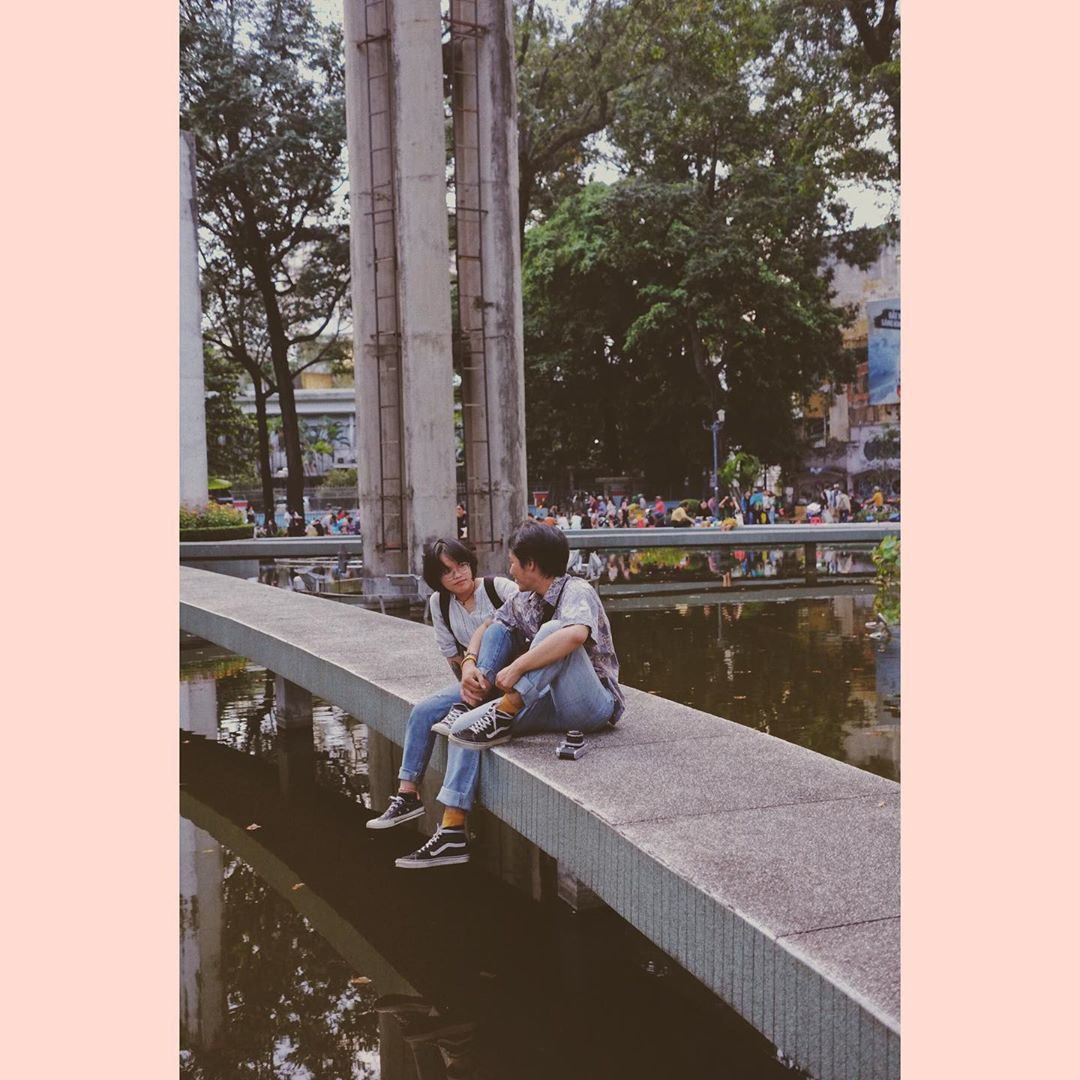 As a historical symbol of Saigon, Turtle Lake has become a destination that attracts many locals as well as tourists. If you have the opportunity to come to Saigon - no matter when it is - you should try going to Turtle Lake to enjoy the rare peaceful moments of this bustling city.