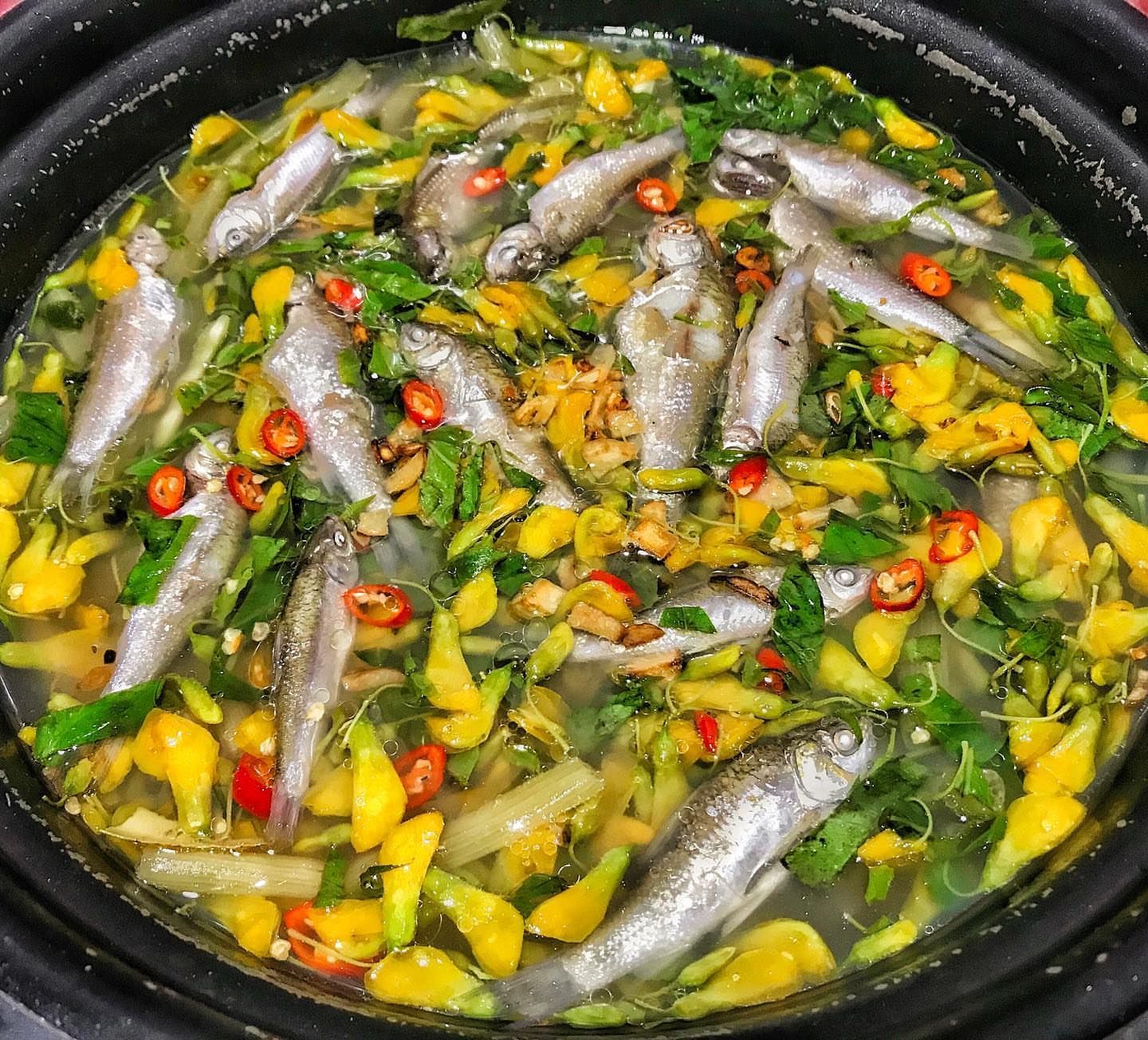 An Giang cuisine is not complicated but simple with a lot of dishes featuring local characteristics. Here are three unique dishes made from common sesban flowers that you should try once when coming here.

Fish noodle soup is considered “an authentic An Giang dish”. The most highly recommended restaurants to try the dish are in Chau Doc city, An Giang province. You can find fish noodle soup anywhere in Vietnam, but the one served with common sesban flowers is probably only found in An Giang. This kind of flower is often available in Southwest Vietnam during the floating season (August - November). Common sesban flowers have a bright yellow colour and are often used to make different dishes by the locals.

Chau Doc fish noodle soup is considered the best dish made from noodles in An Giang province. Photo: Dienmayxanh

The main ingredients to make An Giang fish noodle soup include snakehead fish and common sesban flowers. The fish meat is cut into bite-sized pieces and then stir-fried with some spices and fresh turmeric to create an eye-catching colour. The flowers are washed and drained. The broth is stewed from fish bones, fish heads, chicken bones, lemongrass and turmeric to create an orange-yellow colour. The standard broth must be clear and have a light sweet taste. The noodles used are the common type made from rice flour with a medium level of chewiness. 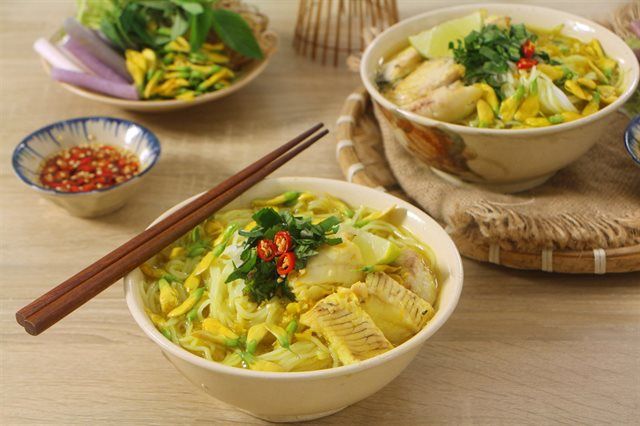 A bowl of Chau Doc fish noodle soup includes ivory white noodles and some pieces of stir-fried snakehead fish. Depending on the dines’ taste, some restaurants may offer grilled fish or chicken. The bowl of noodles is fully filled with broth, some thinly sliced banana flowers, chopped water morning glory and some bright yellow common sesban flowers, which creates attractiveness for the dish. Right from the first taste, you will be able to feel the sweetness of snakehead fish in harmony with banana flower and crispy water morning glory. The common sesban flowers have a slightly acrid taste at first, but then you can feel the sweet aftertaste. 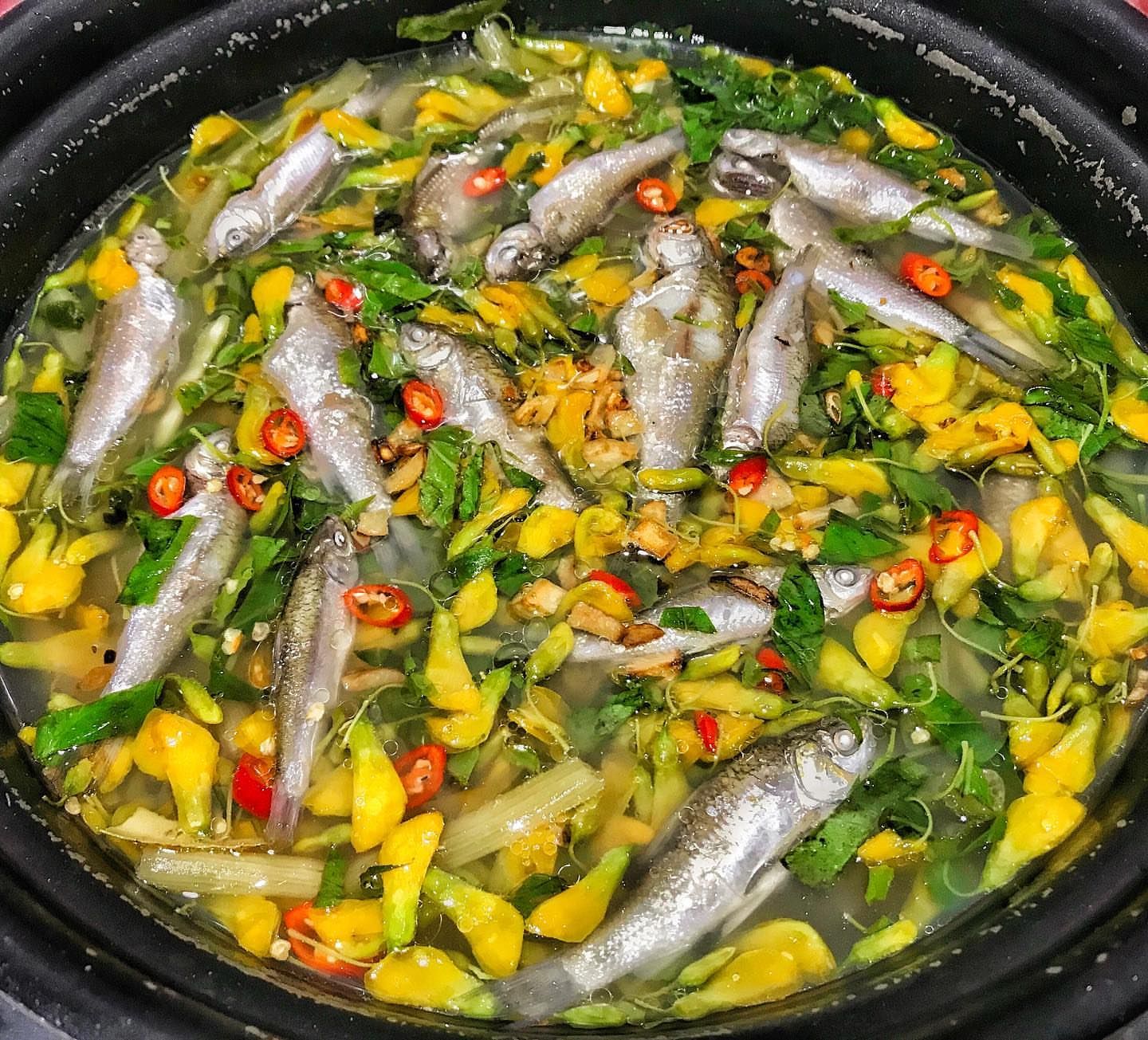 Linh fish sour soup with common sesban flowers is a specialty of Southwest Vietnam in general and in An Giang in particular. Photo: bepxua

Similar to An Giang fish noodle soup, the special feature of this soup  is the inclusion of common sesban flowers. Another highlight of the dish is “Linh fish” (Henicorhynchus), which is only available in Southwest Vietnam during the floating season as well. The Linh fish has a white colour and is as small as a finger. This kind of fish tastes the best at the beginning of the floating season as at this time, they are small in size with soft bones and fatty meat.

In order to make the sour soup, choose small or medium-sized Linh fish, then remove their intestines and put them in a pot of sour tamarind juice. After the pot of water boils, add a few ingredients such as tomatoes, herbs, mung bean sprouts and common sesban flowers. Finally, add some salt and monosodium glutamate, then you will have a pot of sour soup. 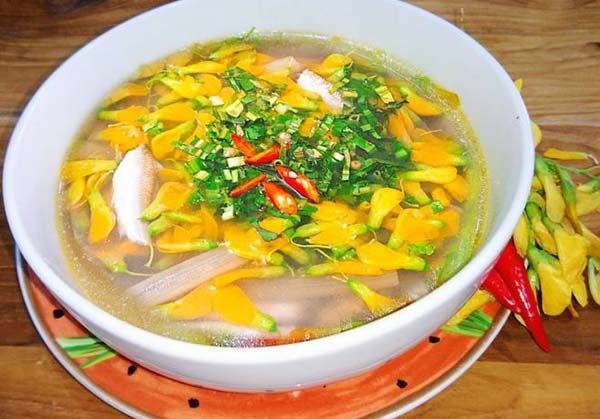 The dish has a light sour taste of tamarind, combined with sweetness of Linh fish, and the strong aroma of sawleaf and mung bean sprouts. Photo: nauantainha

The pot of Linh fish sour soup with common sesban flowers will definitely attract you right from its look with many colours, such as the red colour of tomatoes, the outstanding yellow colour of common sesban flowers, or the green colour of herbs. The dish has a light sour taste of tamarind, combined with sweetness of Linh fish, and the strong aroma of sawleaf and mung bean sprouts. A bowl of fragrant rice served with this sour soup will definitely “steal your heart”.

A bowl of Linh fish sour soup with common sesban flowers is priced at the cost of VND 50,000. 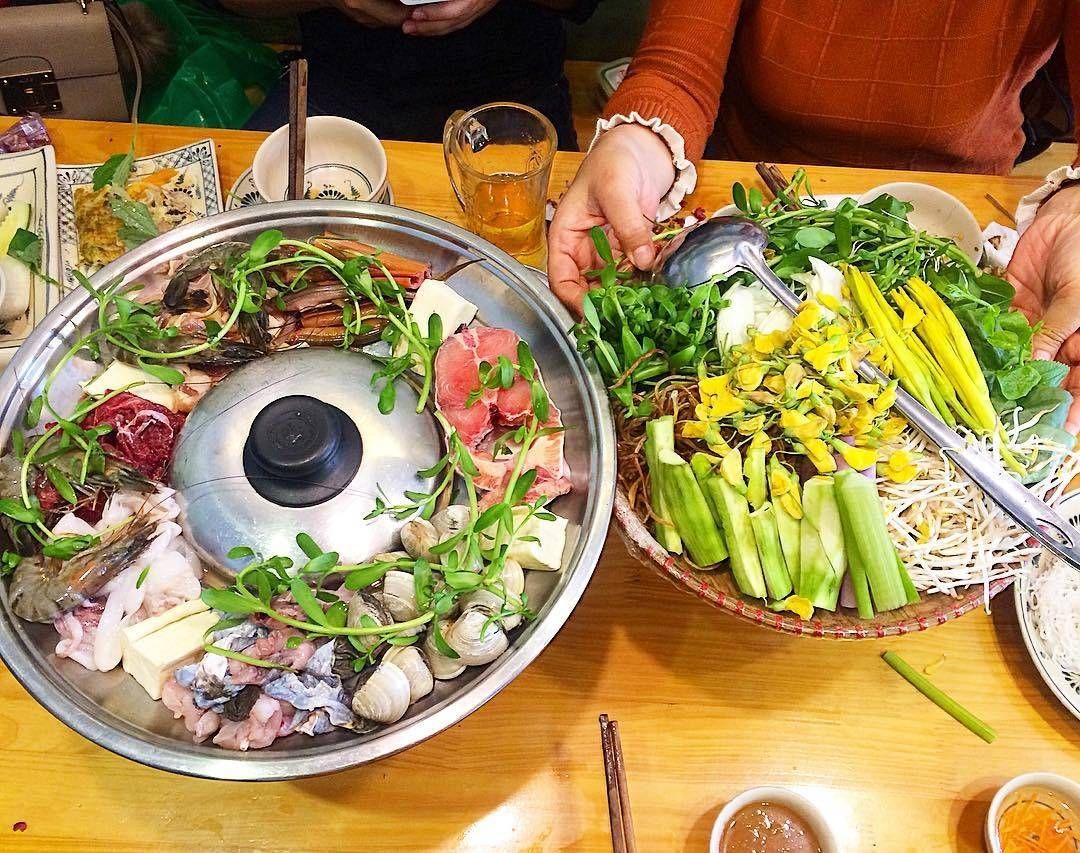 Hot pot is a popular dish in Vietnam, but perhaps only in An Giang can you enjoy a special kind of hot pot with fish sauce. Chau Doc city is very famous for this dish.

To make fish sauce hot pot, locals often stew broth from pork bones. Fry some shallots in a pot, then pour the filtered fish sauce into this pot and boil. Next, pour this boiled fish sauce into the pot of bone broth. The ingredients such as shrimp, beef, squid, eggplant, mustard green and water lily are cleaned and cut into bite-sized pieces. Common sesban flowers are also cleaned and drained. 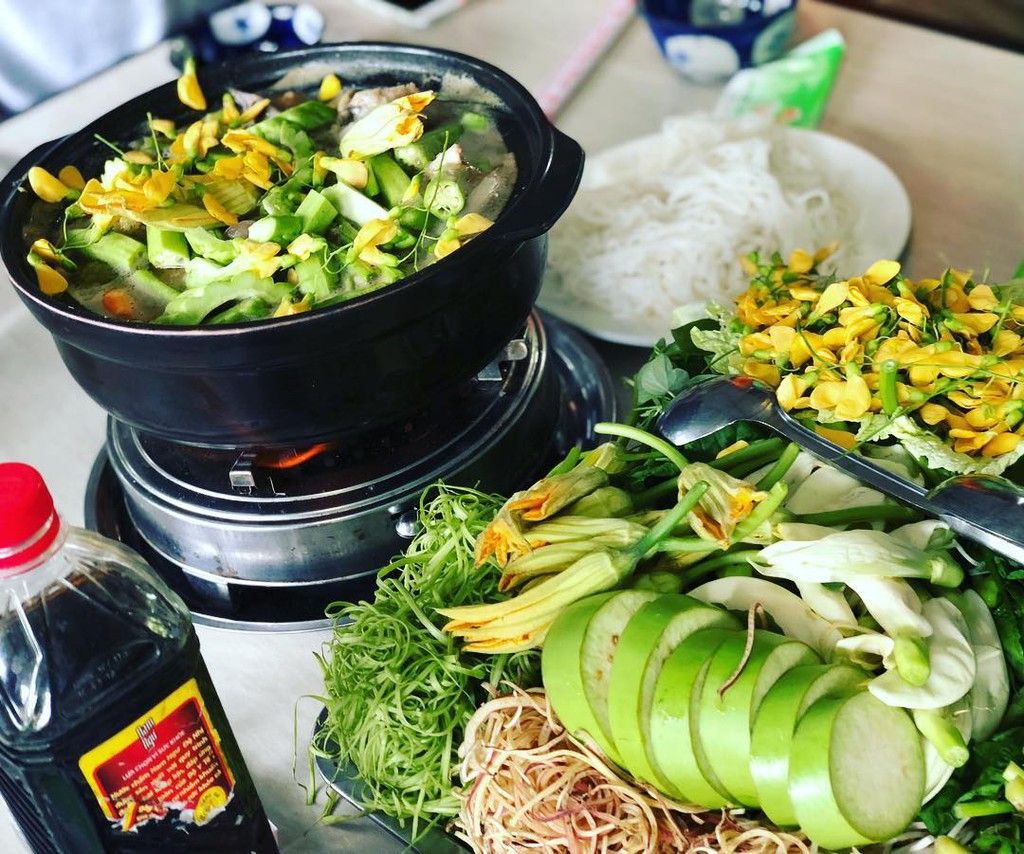 The fish sauce hotpot has a characteristic strong flavor and is served with a variety of vegetables, especially common sesban flowers. Photo: macramela

The broth will be boiled continuously. You can put the meat and vegetables into the pot and enjoy them when they are still hot. The rich taste of broth, combined with meat and especially vegetables (such as water lily, mustard green and common sesban flowers) which are both sweet and gentle acrid, can create an impressive flavor. Fish sauce hot pot is often served with rice noodles.

An Giang is not a modern or noisy province, but it is very idyllic with typical dishes of Southwest Vietnam. Once visiting this land, don't forget to enjoy the dishes with common sesban flowers - their unique flavor will definitely leave you unforgettable feelings.