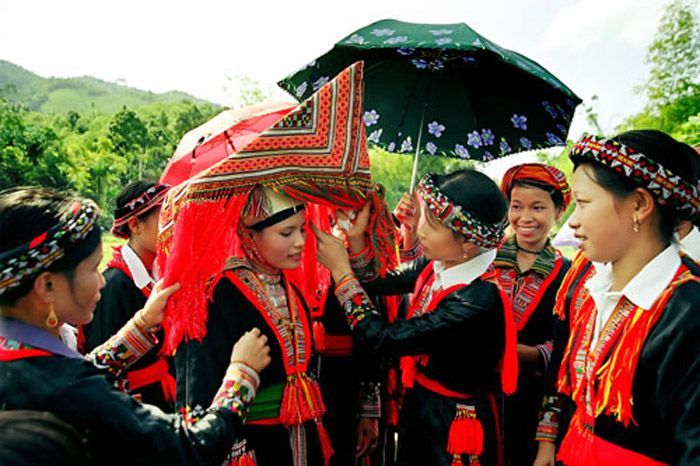 The Hmong are an ethnic group of Vietnam with a long-standing history and unique culture, among which the wedding custom of the Hmong people still retains the unique traditional identity, capturing the attention of many domestic and foreign tourists.

Hmong - one of 54 ethnic groups in Vietnam

The Hmong people are originally from China, who gradually migrated into Vietnam from 300 years ago to the end of the 19th century. Currently, this ethnic group has over 558,000 people across the country. They reside mostly in the northern mountainous provinces, along the Vietnam - China and Vietnam - Laos borders, mainly in the provinces of Lai Chau, Son La, Ha Giang and Lao Cai. 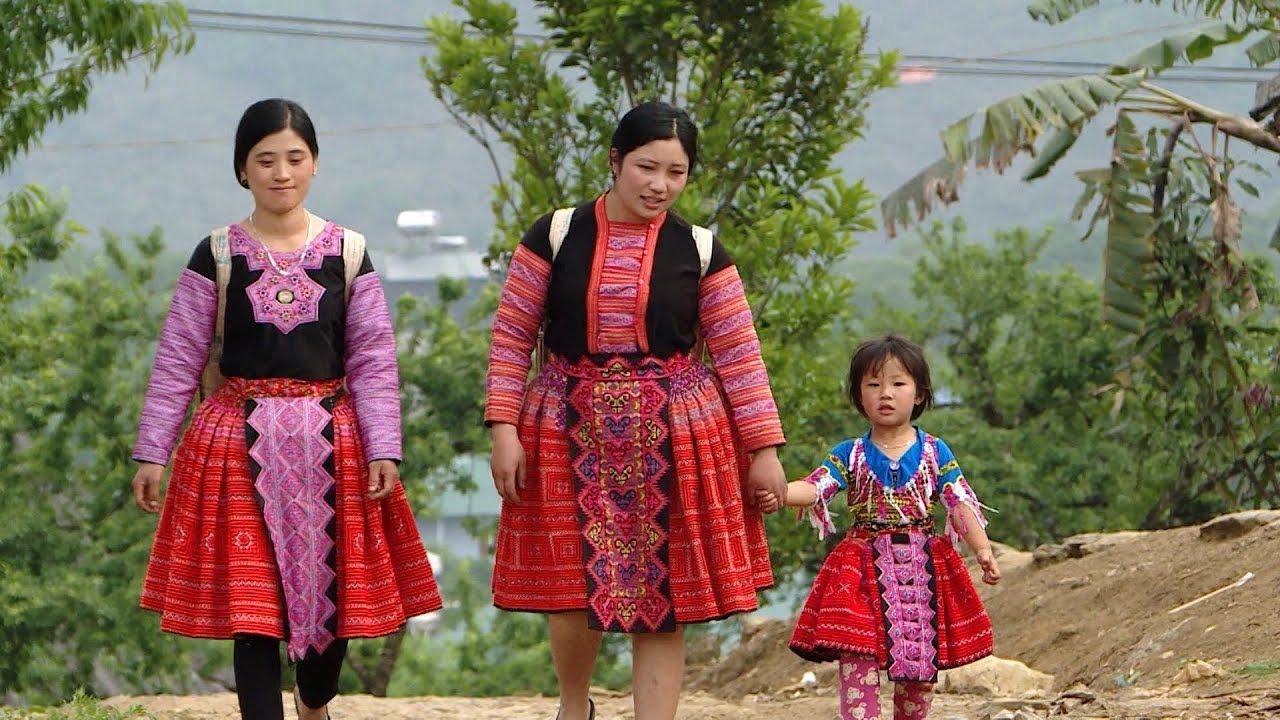 The Hmong ethnic group in Vietnam is of Chinese origin. Photo: youtube 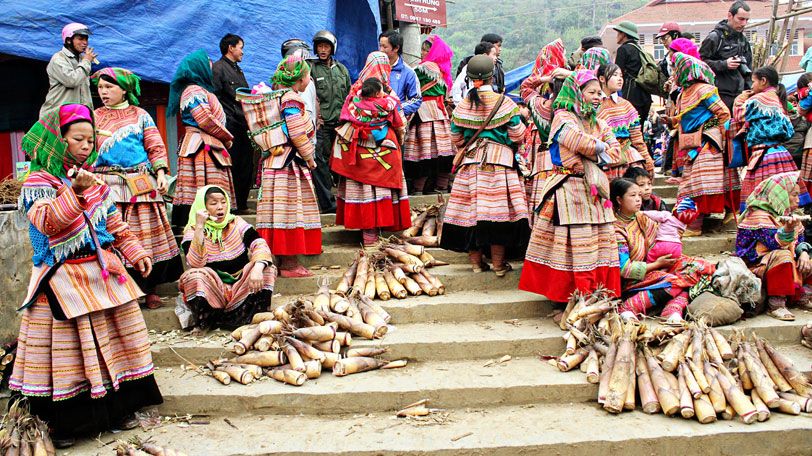 The Hmong are divided into different groups such as Mong Do (Mong Trang), Mong Lenh (Mong Hoa), Mong Si (Mong Do) and Mong Du (Mong Den). Not only do they have their own clothes made from linen, but they also have many unique customs, among which the most prominent one is the wedding custom.

From “love” to “permission”

The Hmong consider the fairs and the New Year Festival to be the ideal time to find a lover. On these occasions, young men and women - usually between the ages of 13 and 15 - often wear their best clothes and hang out at the market. The bustling atmosphere of such places is an ideal condition for them to find a lover. Notably, guys often pursue healthy girls as they will be good at raising children and working in the fields. 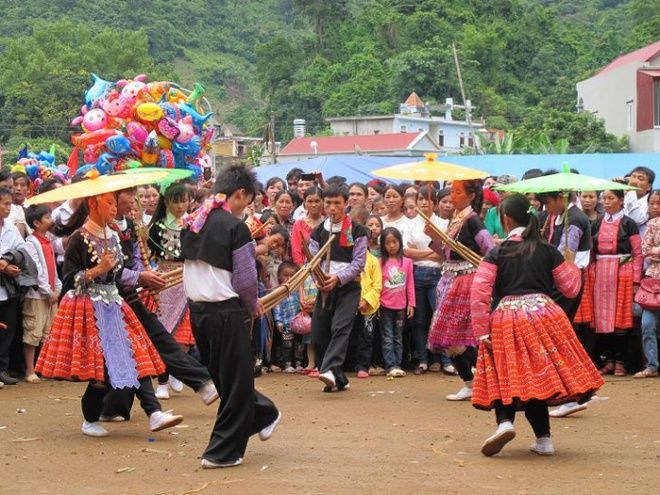 The customs of having a wedding ceremony of the Hmong are relatively complicated. If the couple gets permission from their families, the procedures of organising a wedding will be performed. Otherwise, without their parents' permission, the whole community would not approve of them getting married.

In order to remove obstacles from the family, the young man has to talk to his parents and relatives first to have a plan to get married, however, it is necessary to have the consent of the lover. 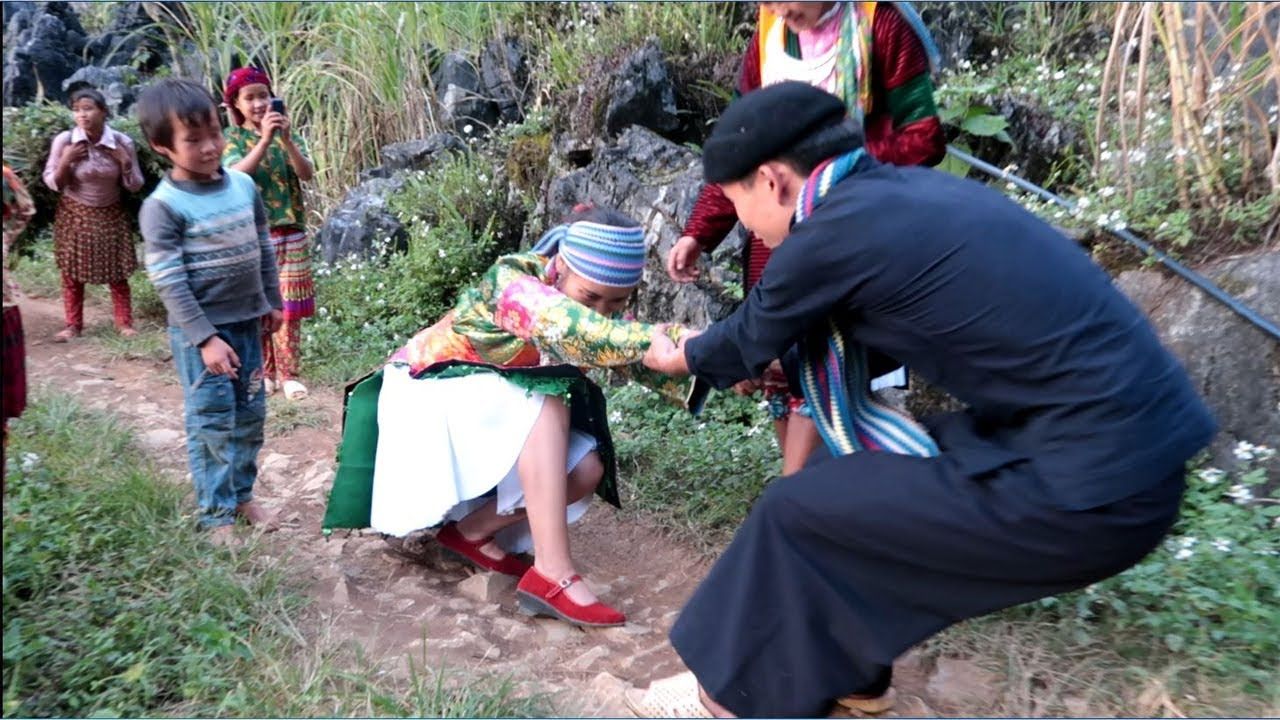 The custom of “pulling the wife” of the Hmong. Photo: Youtube

On the agreed date, the guy will meet the girl, then he will ask his acquaintances and friends to “pull” the girl home, which is called the “wife pulling” or “wife catching” custom. Although she has known everything in advance, according to traditional perceptions, the girl still has to pretend to cry for help so as not to be considered as “a bad girl”.

Especially, when the girl's family runs to rescue her, the guy's friends and acquaintances have to suffer from being beaten to help him bring the girl home. On the way to carry his wife home, the guy must be extremely careful - he must not let the girl’s feet touch the ground while protecting her from any injury. When the groom's family informs the girl's family that they have had a daughter-in-law, even if it is “uncomfortable”, most of the girl's family will accept this. 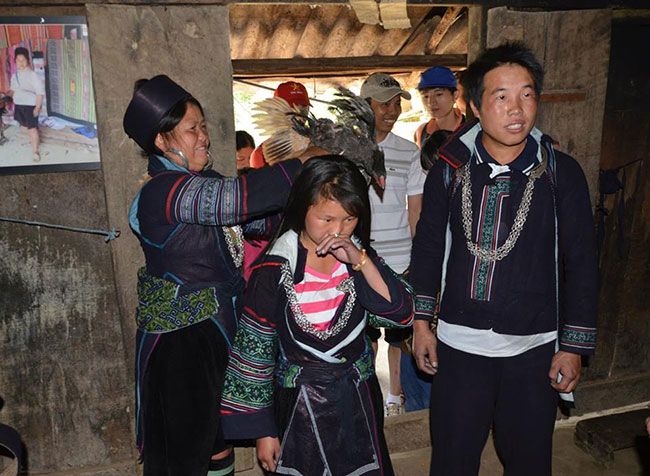 The girl is being “pulled” home by the guy's family. Photo: Communist Party Newspaper.

After that, the girl will stay in a separate room in the guy’s house. Three days later, the guy's parents will take the couple to the girl's house to discuss their marriage. If the girl agrees to get married, the wedding will be organised; otherwise, it will be annulled.

Formal ceremonies in a wedding of the Hmong

In order to have an official marriage, the Hmong people have to perform formal ceremonies such as “asking for permission”, “sending gifts” and “welcoming the bride”.

After getting the permission, the man and the girl will stay in the girl’s house to help her parents with household chores for a few days before returning to the man’s house. Based on the agreement on a wedding ceremony between the two families, the groom's family will ask a man to serve as a matchmaker - this person is responsible for discussing with the bride's family about the wedding gifts. The selection of a matchmaker is based on pre-existing criteria - this must be a reputable person who can sing, drink, and has a lot of experience in communication and storytelling. The must-have offerings are a rooster, a bottle of wine and coloured threads. 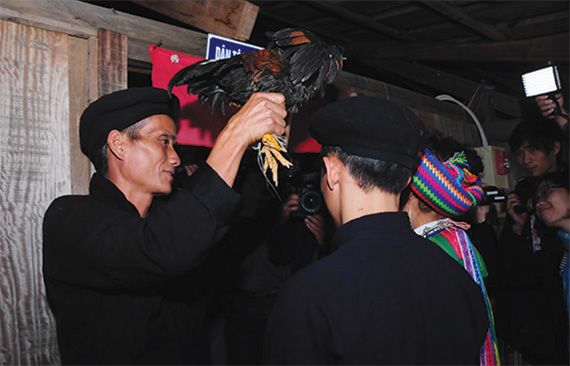 The required offerings are composed of a rooster, a bottle of wine and coloured threads. Photo: Communist Party Newspaper.

The Hmong believe that spring is the time when everything flourishes, so they often hold a wedding ceremony at this time. After fully preparing the gifts, the groom's family will send them to the matchmaker and assign specific tasks to each of the family members to welcome the bride. According to custom, the groom and best man, before moving to the bride's house, must bow to the ancestors, Heaven and Earth to show their respect. 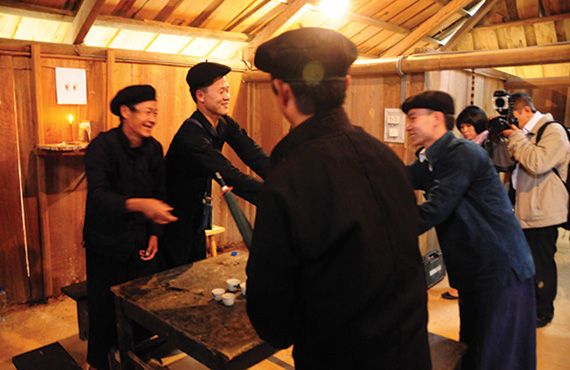 The man’s family goes to the girl's family to ask for a wedding. Photo: Communist Party Newspaper.

The matchmaker will receive the black umbrella and a cloth bag from the head of the family, then lead the family to the bride's house. The whole group of people at this time are extremely excited as they often laugh and talk happily all the way. 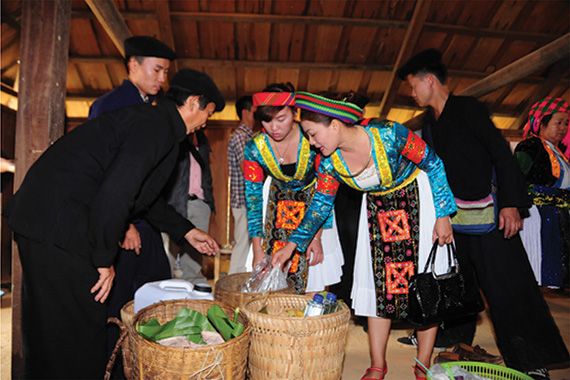 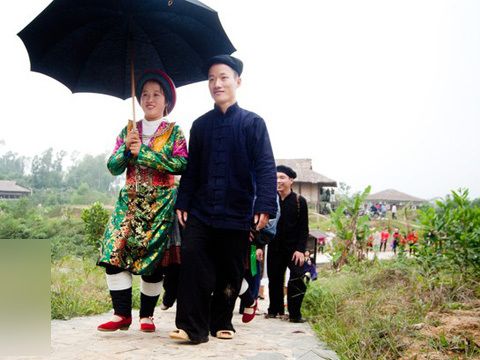 The bride and groom on their way home. Photo: Vietnamnet.vn 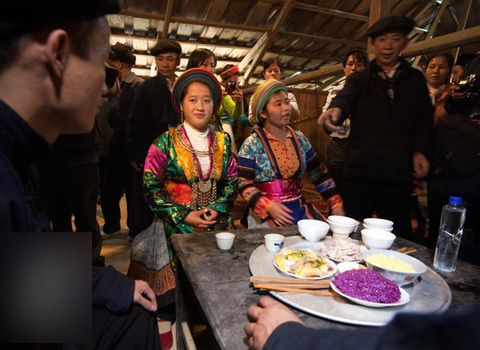 The bride is having a meal with the groom’s family. Photo: Vietnamnet.vn

Upon arrival at the groom's house, the bride will be “permitted” to enter the house and the matchmaker will present the good results from the previous ceremony. When everything is done, it is time for the family and guests to gather together to have a feast to celebrate a happy new couple. 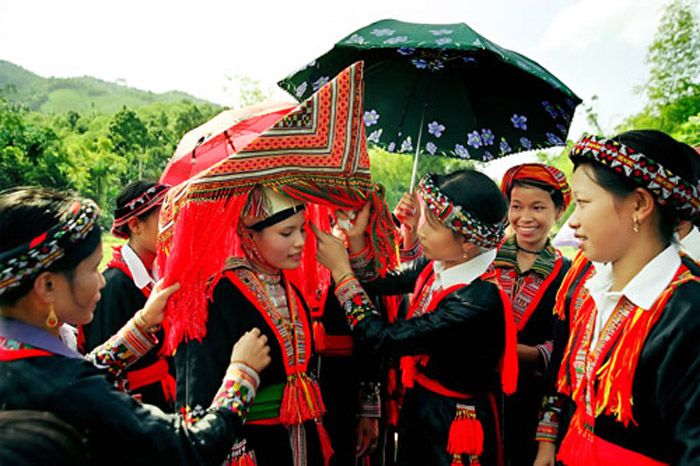 The wedding custom has created a highlight in the life of the Hmong people and at the same time has contributed to the diversity of Vietnam's cultural identity. That is why you should visit the villages of the Hmong to learn about their diverse and unique life.