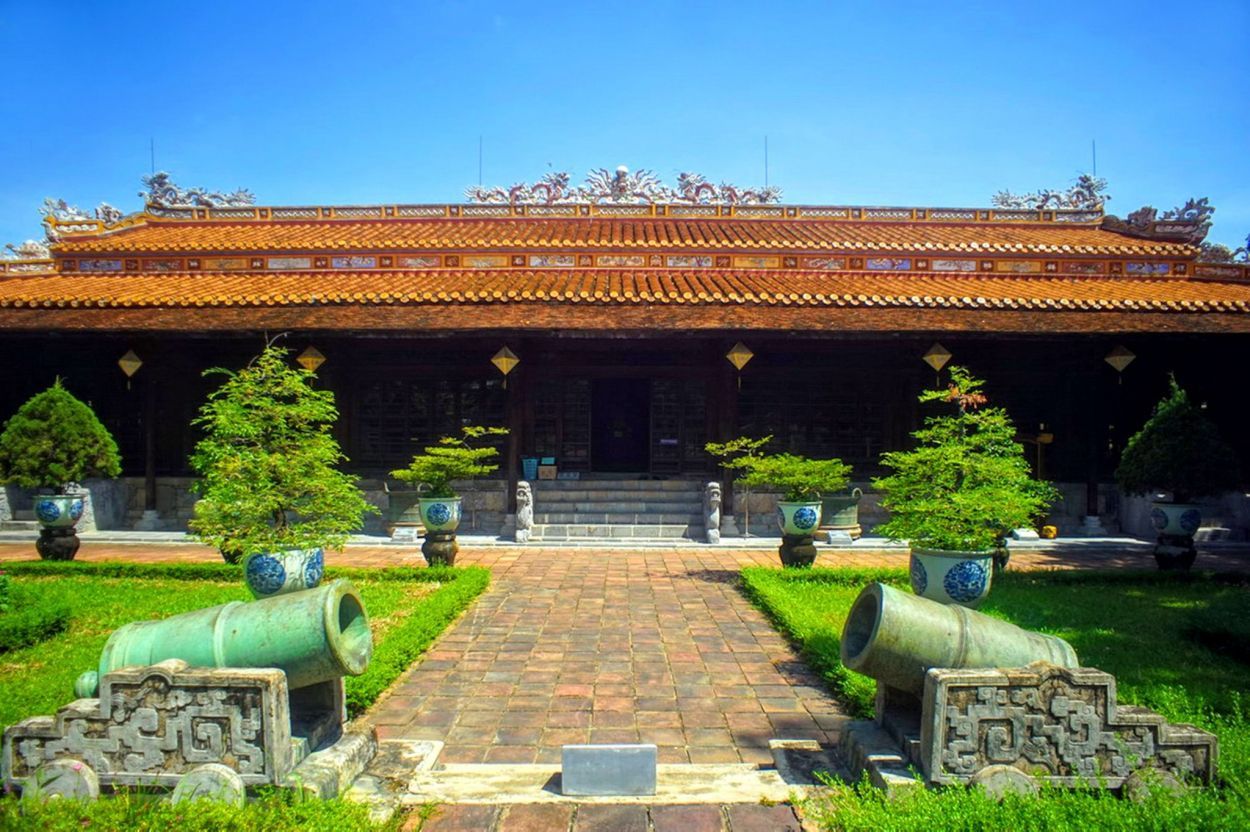 Four destinations not to be missed in Hue

Hue is the province featuring the historical values of Vietnam with a system of massive mausoleums built in feudal times. Here are the 4 most prominent places of the ancient capital that tourists should visit.

Located on a bank of the Huong River, Hue city is the “capital” of Thua Thien Hue province in Central Vietnam - which is about 700km to the south of Hanoi. From 1788 to 1945, Hue was not only the capital of Vietnam, but it was also a political, cultural and religious center of the country under the control of the Nguyen Dynasty. With rich historical values, Hue was recognized by UNESCO as one of the world cultural heritages in 2003. 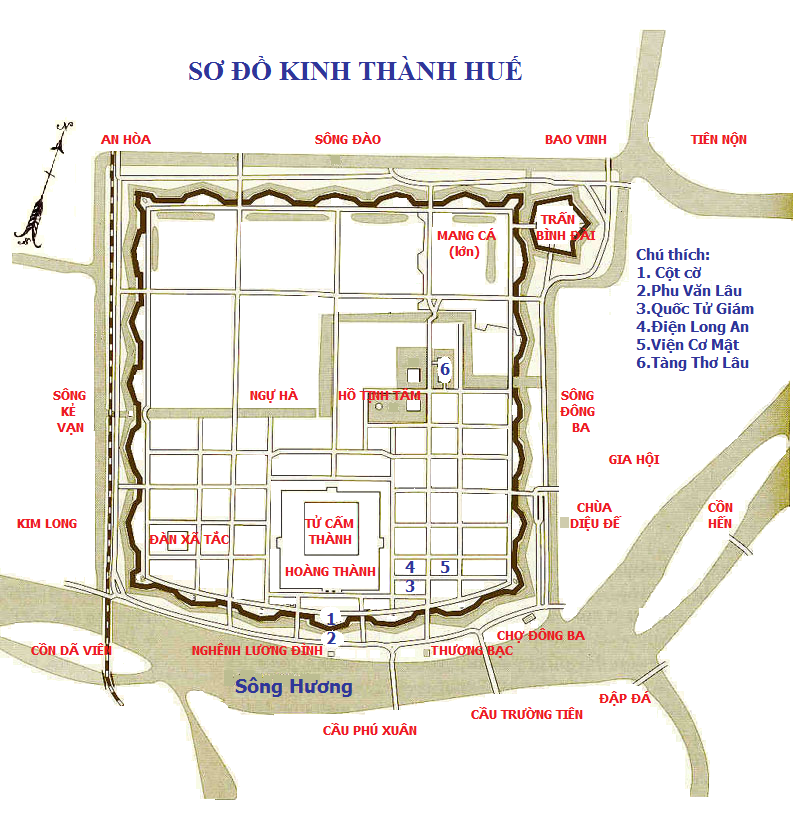 The map of Hue Ancient Capital and some relics. Photo: nguoikesu

Hue Ancient Capital is the first place tourists should visit. Located on a bank of the romantic Huong River, the complex of Hue Ancient Capital covers an area of more than 500 hectares, including many historical and cultural relics built by King Gia Long of the Nguyen Dynasty in the early 19th century. The capital includes three parts, namely Imperial City, Imperial Citadel and Purple Forbidden City.

Built in the early 19th century (from 1805 to 1823), Hue Imperial City has more than 10 gates with more than 24 fortresses for defense. In the Imperial Citadel, the Nguyen Dynasty also constructed many mausoleums and works, such as Ky Dai, Long An Palace, Imperial Academy and Tinh Tam Lake. 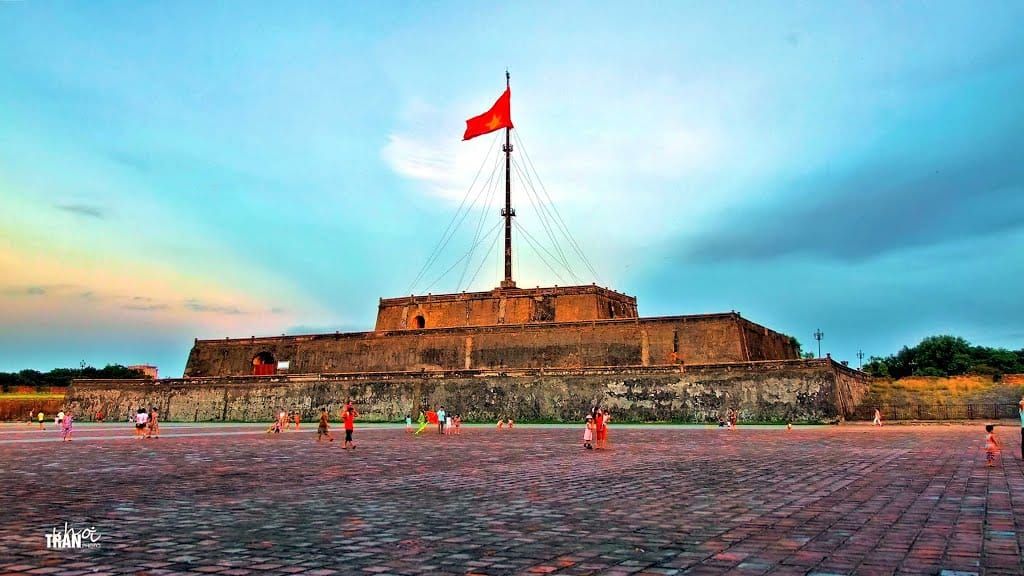 Ky Dai means “flagpole” in Vietnamese. The work was built in the middle-front of the Hue Imperial City. The flagpole has three overlapping rectangular trusses with a height of 5.5, 6 and 6 meters respectively. The grounds of the three floors are covered with bricks, and formerly there were eight cannons and two watchtowers here. The old flagpole was made of wood with two floors and a height of 30m, but due to the degradation from nature and wars, it was destroyed twice and then was reconstructed with concrete and steel with a height of 37m as it is today.

On August 23, 1945, for the first time, the flag of the Democratic Republic of Vietnam was raised on top of Ky Dai, putting an end to the monarchy.

The Imperial Academy (Quoc Tu Giam) is located at No.1 of the “August 23rd” street in Hue city. This is considered the first national school under the Nguyen Dynasty. The forerunner of the Imperial Academy is called “Doc Hoc Duong'', which was built under the reign of King Gia Long in An Ninh Thuong commune, Huong Tra district - about 5km to the west of Hue Imperial City. In 1820, King Minh Mang changed its name to “Quoc Tu Giam'' (Imperial Academy) with a larger campus. In 1848, surrounding walls and two dormitories were built. On visiting the school, King Tu Duc wrote a 14-chapter essay to encourage students to study. The entire text is engraved on the stele in front of the schoolyard.

In 1908, under the reign of King Duy Tan, Quoc Tu Giam was relocated to the Imperial City (the present location). In comparison with the old academy, the new Quoc Tu Giam was constructed with many additional buildings. Since 1945 (the end of the Nguyen Dynasty), its historical architecture has remained until now.

There are 32 steles engraved with the names of 293 doctors of the Nguyen Dynasty, from the first exam in Minh Mang reign to the last exam in Khai Dinh reign. 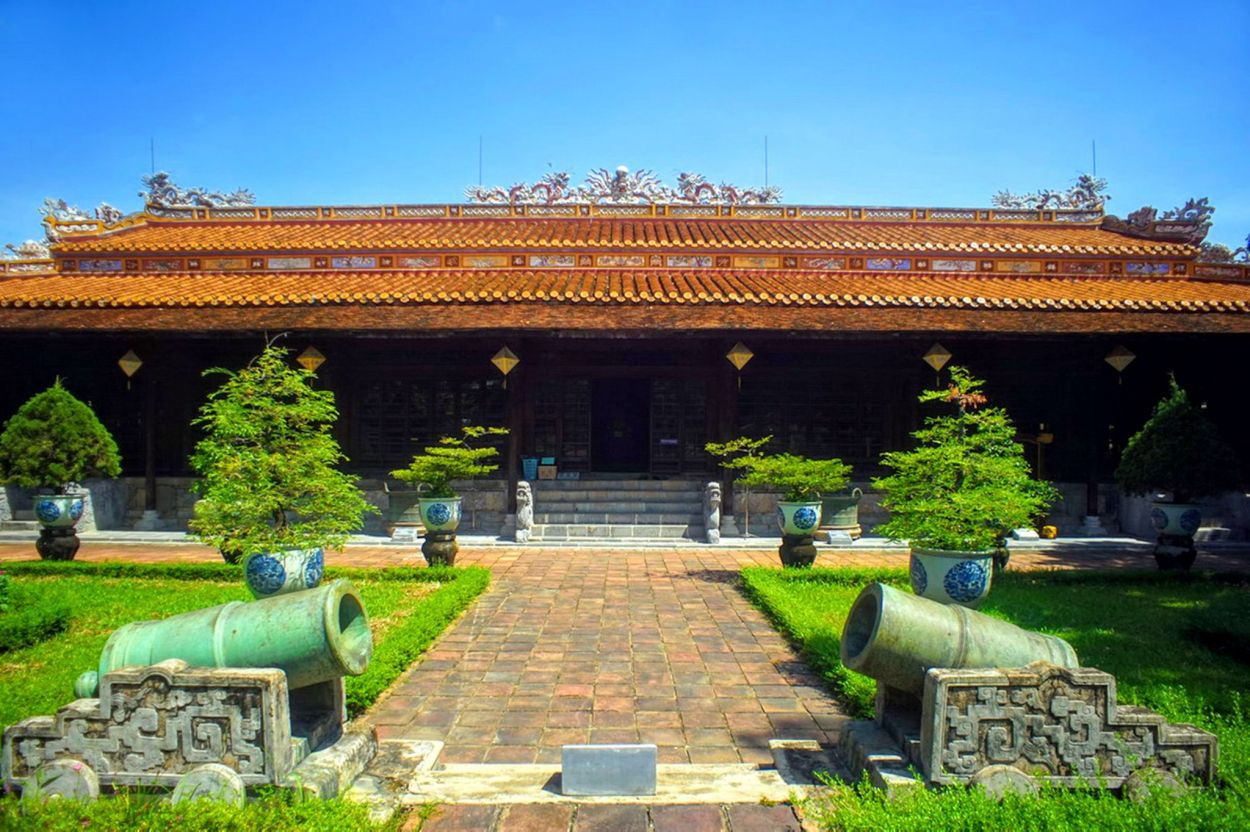 As one of the most beautiful palaces in Hue Imperial City, Long An Palace belongs to the complex of Bao Dinh Palace, which was built by King Thieu Tri in 1845 on the north bank of Ngu Ha River (near Vinh Loi Bridge, Tay Loc Ward). The palace was designed in the style of a “double building” with seven front and five rear compartments.

The materials of Long An Palace are not painted with gilded paint, but they are carved with sophisticated images such as dragons, moons, unicorns, turtles and phoenixes. In addition, the front hall and the main hall are linked by boxes directly inlaid with bones, ivory, and mother-of-pearl.

Long An Palace used to be the place for King Thieu Tri to rest after his conducting the Tich Dien (ploughing) ceremony every early spring. In addition, the king often rested, read books, wrote and recited poems here. Up to now, Long An Palace has become the Hue Royal Fine Arts Museum. 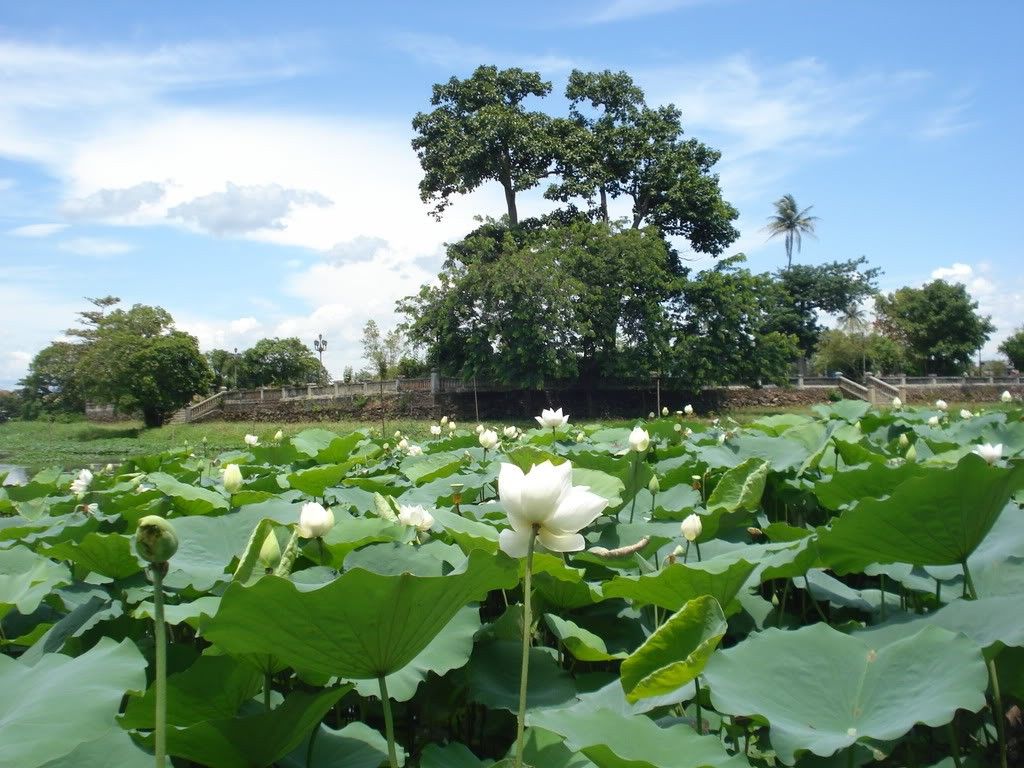 Tinh Tam Lake was formerly a vestige of the Kim Long River flowing through Hue. Under the reign of Gia Long, some sections of the river were renovated to form Ngu Ha and Ky Te Lake. In the lake, there are two small islands which were used to store saltpeter and gunpowder. In 1822, under the reign of King Minh Mang, the lake was renovated by 8,000 soldiers of the Nguyen Dynasty, and the two warehouses were relocated to the East. This place was then reconstructed as a place of entertainment with the new name “Tinh Tam Lake''.

This rectangular lake (with a circumference of 1,500m) has three islands, namely Doanh Chau, Phuong Truong and Bong Lai. There is a wall surrounding the lake with 4 gates, which are Ha Huan in the south, Dong Hy in the north, Xuan Quang in the east, and Thu Nguyet in the west. White lotus is planted in the lake, while bamboo surrounds the lakeside, which creates a romantic scene.

Tinh Tam Lake was considered as the most famous place of the Nguyen Dynasty. King Minh Mang wrote 10 poems to praise the lake with the title “Bac Ho Thap Canh”, while King Thieu Tri ranked Tinh Tam in the third position in the category of the “Twenty beautiful scenes of Than Kinh”. 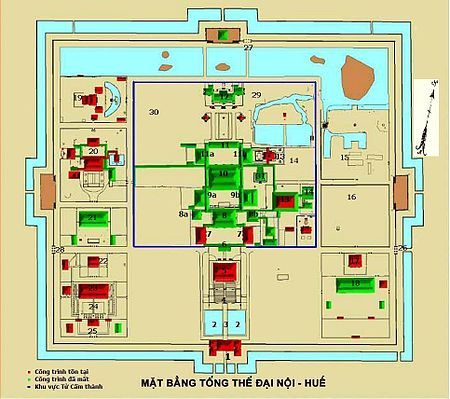 The Citadel, also known as the Imperial Citadel of Hue, is the second citadel inside the Hue Imperial City, which has the function of protecting the most important palaces, the shrines to the ancestors of the Nguyen Dynasty, and the Purple Forbidden City - the place of kings and royal families. The Citadel was built from 1804 to 1833 with about 147 works. 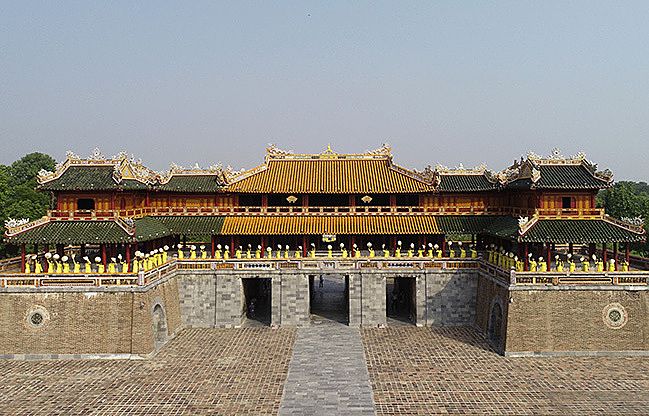 In terms of architecture, the Citadel was designed in square shape with about 600 meters on each side. It was built of bricks with a height of 4m and a width of 1m. The Citadel was surrounded by a protective moat. There are 4 gates in total, namely Ngo Mon (in the South - Main gate), Hien Nhon (in the East), Chuong Duc (in the West), and Hoa Binh (in the North). The bridges and lakes around the citadel are named Kim Thuy.

All the works are located in the middle of nature, surrounded by flower gardens, stone bridges, islands and lakes, which creates a very airy atmosphere. The works are constructed in different sizes, but they all follow the “double-building” architecture with Thanh stone and Bat Trang tiled floor with green or yellow glaze. The interior of the palace is decorated with the one-poem-and-one-picture style. Many poems are written in the Chinese language system. 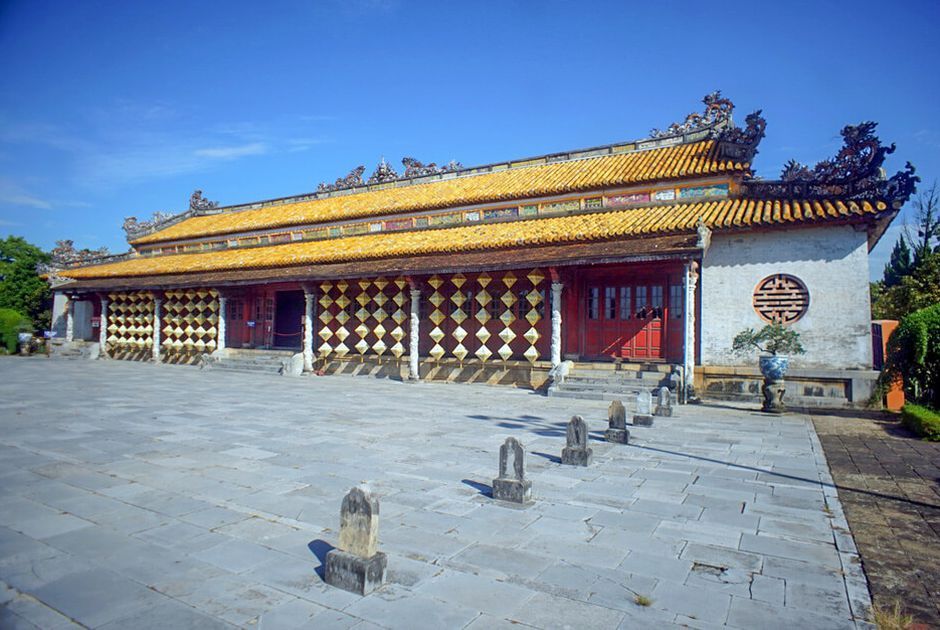 The magnificent Thai Hoa Palace in the Citadel. Photo: yeudulich

The outstanding work in Hue Imperial Citadel is Thai Hoa Palace as there is a throne here - the symbol of a feudal dynasty. This is also the coronation place of 13 Nguyen Dynasty kings, while many important events such as dynastic meetings or welcoming ambassadors were organized here. 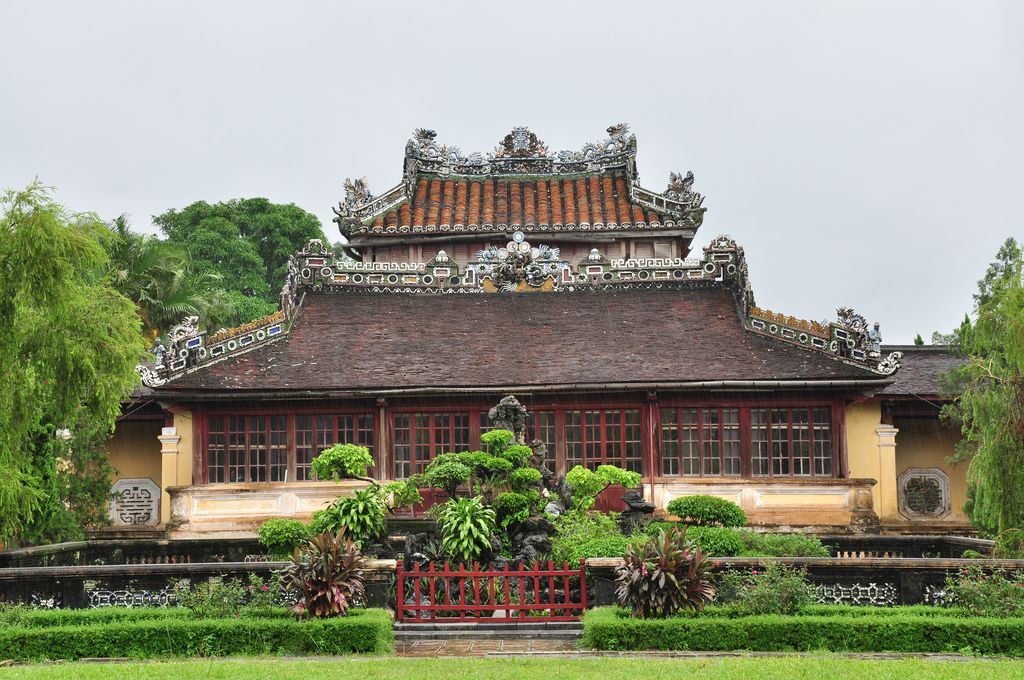 The Purple Forbidden City is the third citadel of the Hue Imperial City, and this is also the place of work, accommodation and activities of the king and royal family of the Nguyen Dynasty. This place was built in the third year under the reign of Gia Long (1804) with the original name “Cung Thanh”. In 1822, King Minh Mang changed its name to Purple Forbidden City (Tu Cam Thanh).

The Purple Forbidden City, which is located in the Imperial Citadel, is designed in a rectangular shape. It was built entirely of brick with a symmetrical layout. Specifically, the works are built symmetrically along the main axis (from Ngo Mon to Tu Phuong Vo Su building) consistently. In the Forbidden City, there are about 50 works which have experienced the ups and downs of history. 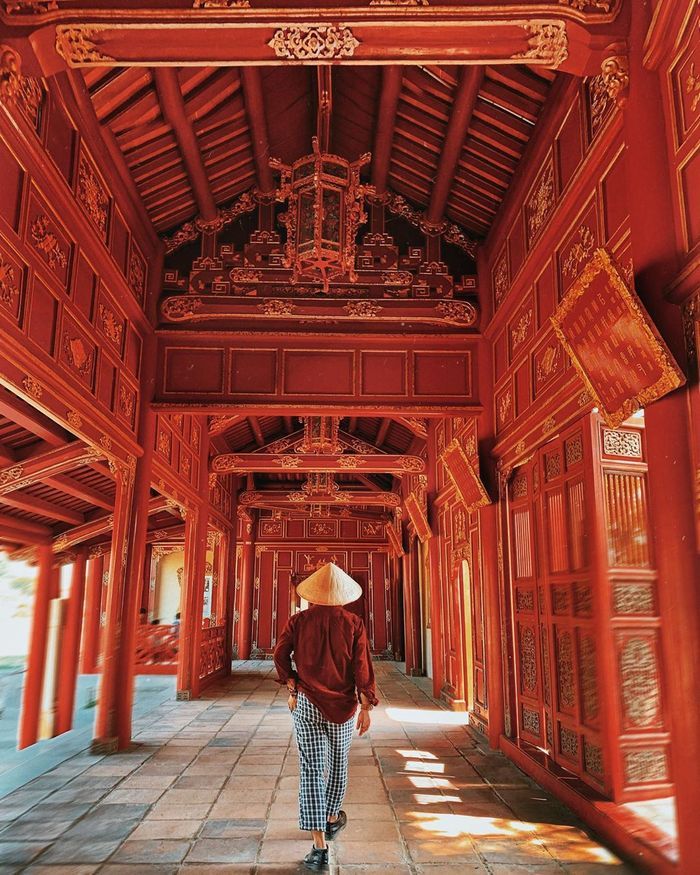 As the residence of the king and his family, the ancient Purple Forbidden City was strictly protected, so other people were rarely allowed to visit the place. Therefore, activities inside the Forbidden City have still caused curiosity until now. 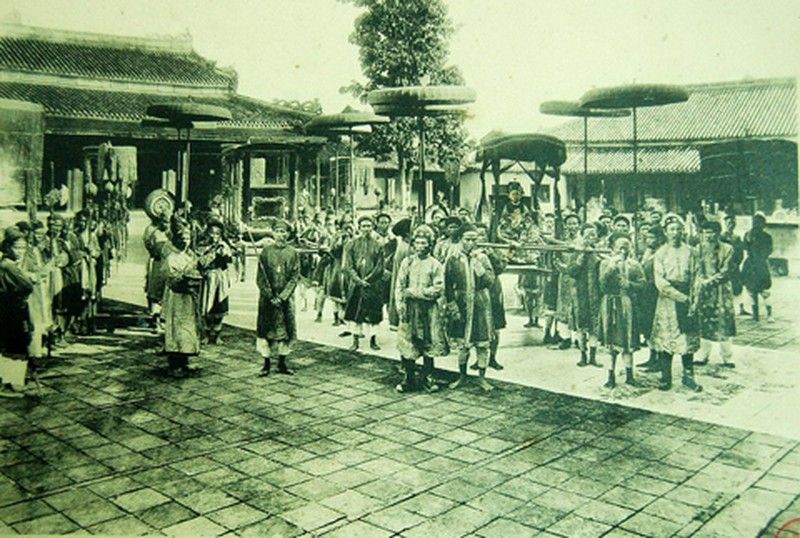 An activity in the palace of King Duy Tan (young) on a palanquin. Photo: visithue

In the book “Life in the Purple Forbidden City”, Ton That Binh wrote: “When entering the palace, concubines are not allowed to meet their relatives, even parents. There are also exceptions when the king allows meetings, but only the mother can talk to her child through a curtain -  they can only hear the voice, but cannot see each other's faces - while the father stands outside looking in. That is why in Hue, there is a saying  "taking the child to the palace means losing that child”.

Thien Mu Pagoda, also known as Linh Mu, is located on Ha Khe hill, beside the poetic Huong River in the territory of Kim Long ward, Hue city, Thua Thien - Hue province. The pagoda was officially established in the year of Tan Suu (1601), during the reign of Lord Nguyen Hoang - the first Nguyen Lord in the “Dang Trong” area. This is one of the oldest pagodas in the ancient capital. If you travel from Trang Tien Bridge to Thien Mu Pagoda by “Dragon Boat”, it will take around 3 hours. During the trip, you can admire the peaceful nature on the banks of the river. Meanwhile, if you travel by motorbike, it only takes about 20 minutes.

In addition to Phuoc Nguyen tower, Thien Mu pagoda has other impressive architectural works such as Dai Hung Palace, Dia Tang Palace, Quan Am Palace, stone stele and bronze bell. Behind the pagoda is a pine forest that “shields” the tombs of the emperors. Near Thien Mu pagoda is the Literature and Martial Workshop, where the sages of the Nguyen Dynasty studied literature, history and maths. 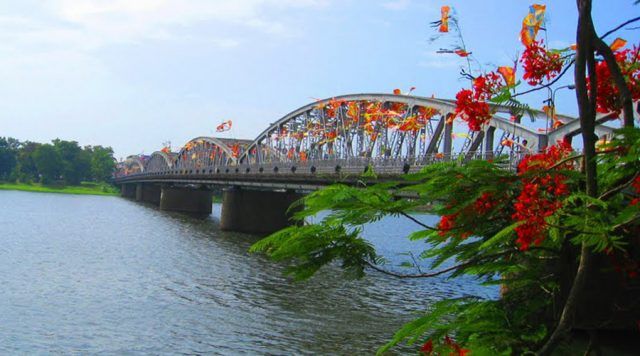 Trang Tien Bridge (also known as Truong Tien Bridge) connects two banks of the Huong River in Phu Hoi Ward (in the North of Phu Hoa Ward). The bridge was built in 1899 under the reign of King Thanh Thai. With a length of 402.6m long and 6 comb-shaped steel girders (with a length of 67m and a width of 6m each), the bridge is designed in Gothic architecture, spanning the Huong River.

The bridge has become the topic of poems and arts for years. Every afternoon, local people often walk along the road along the bridge to feel the gentle breeze from the Huong River. At night, not only does Hue city “light up”, but the bridge is also colorful. The continuously changing color spans reflect the impressive array of colors on the vast river. 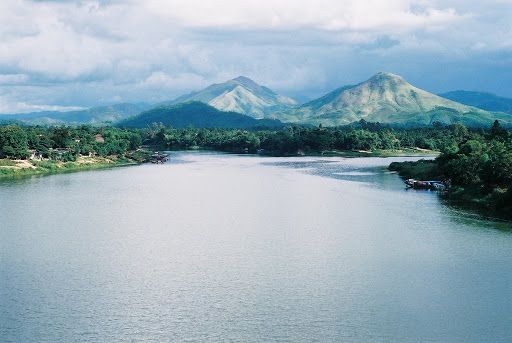 Ngu Binh Mountain next to the Huong River. Photo: halovietnam

Next to the Huong River, Ngu Binh Mountain is a place that anyone visiting Hue should go to at least once. The mountain is located in Hue City, Thua Thien - Hue Province, about 3km from Hue Citadel. Ngu Binh has a trapezoidal shape with a flat top, which can “protect” the Hue Citadel. The whole mountain is covered with pine trees. This is also the home to many birds. You can go to the top of the mountain and admire the surrounding mountains, rivers and the dreamy Hue city.

The ancient capital of Hue attracts tourists by not only its massive mausoleum system, but also the charming nature. You should definitely come to Hue once to fully enjoy the peace of this land.