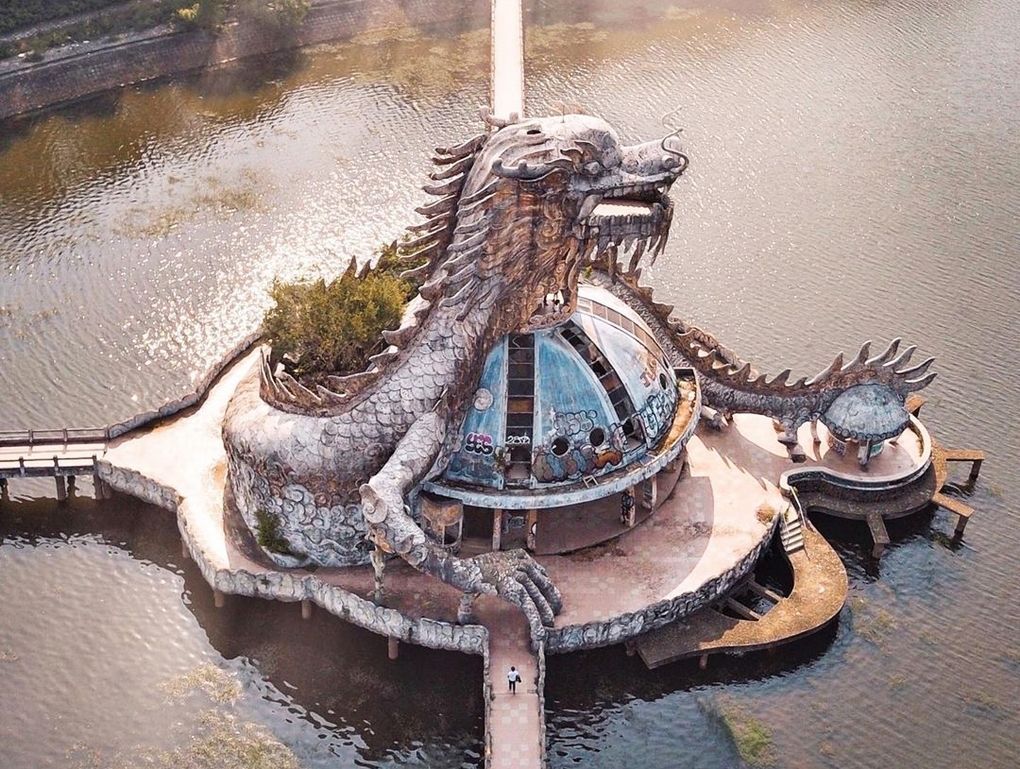 Thuy Tien Lake began to be famous in 2016 as "the terrifying abandoned park". The bleak atmosphere of this place does not prevent people from coming here to discover, but it attracts many curious explorers. Only 10km southwest from Hue city, Thuy Tien lake will appear in front of your eyes.

Thuy Tien Lake is located on Thien An hill in Thuy Bang commune, Huong Thuy town, Thua Thien Hue province. This place has been abandoned for many years and has become an attraction for adventurous people, including many foreign tourists. Initially, Thuy Tien lake was invested by Hue tourism company. By 2004, many parts of the project had been completed, and the park was put into operation with many majestic areas such as an aquarium tourist area, water park, restaurant, water music stage with 2,500 seats, indoor play area and high-class hotel system on the hill.

The image of a curled dragon is the symbol of Thuy Tien lake park. Photo: zing.vn

In 2008, due to ineffective operation, the park was transferred to another investor. In 2011, the tourist area of Thuy Tien lake was officially closed for a new project. Since then, the park has fallen into disrepair and ruin. As nobody is inside, the park is like something from a horror movie. Strangely, this horrific feature makes Thuy Tien lake famous.

In 2016, the page Dailymail published an article introducing the magic and mystery of Thuy Tien lake park titled "The haunting pictures of an abandoned water park reclaimed by nature (including crocodiles)". 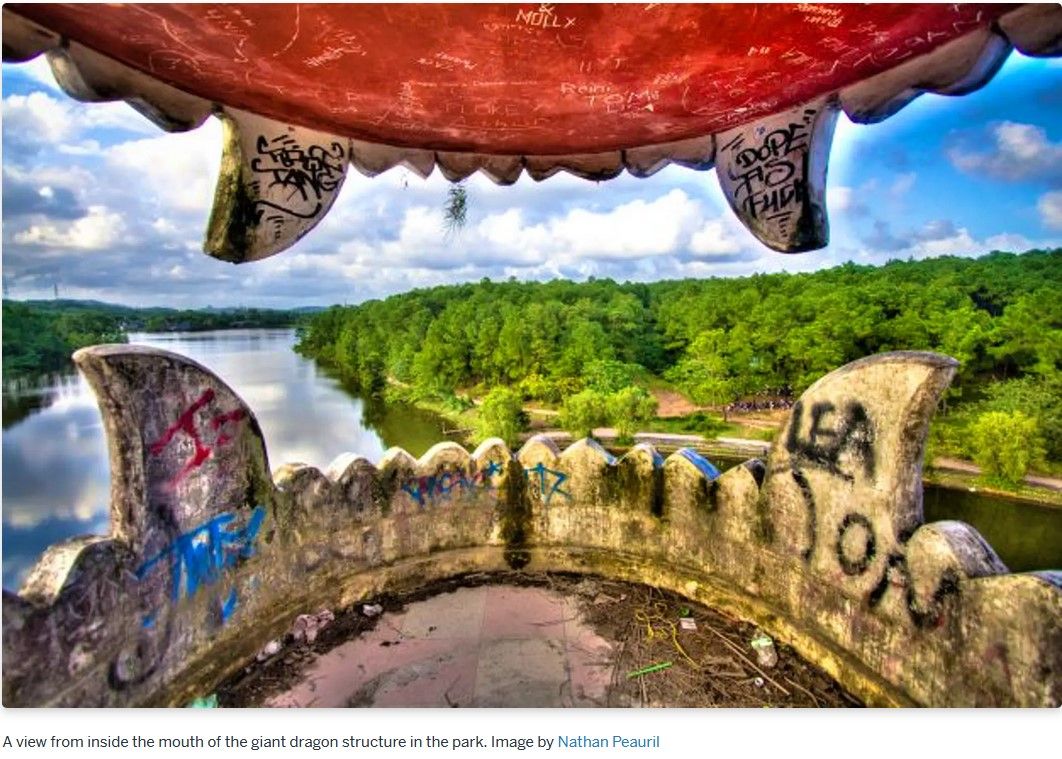 The image in an article of Lonelyplanet about the abandoned water park of Thuy Tien lake. Photo: Lonelyplanet.

In 2017, the Lonelyplanet site also had an article about the park's mystery and wilderness, titled "Photographer captures stunning images of abandoned water park in Vietnam".

Not only does this park attract the attention of international media, but also countless tourists. Most of the visitors coming here are foreigners as they are fond of mysterious and desolate looks and desire to experience the chill and creepiness of an abandoned place, yet beautiful and attractive. 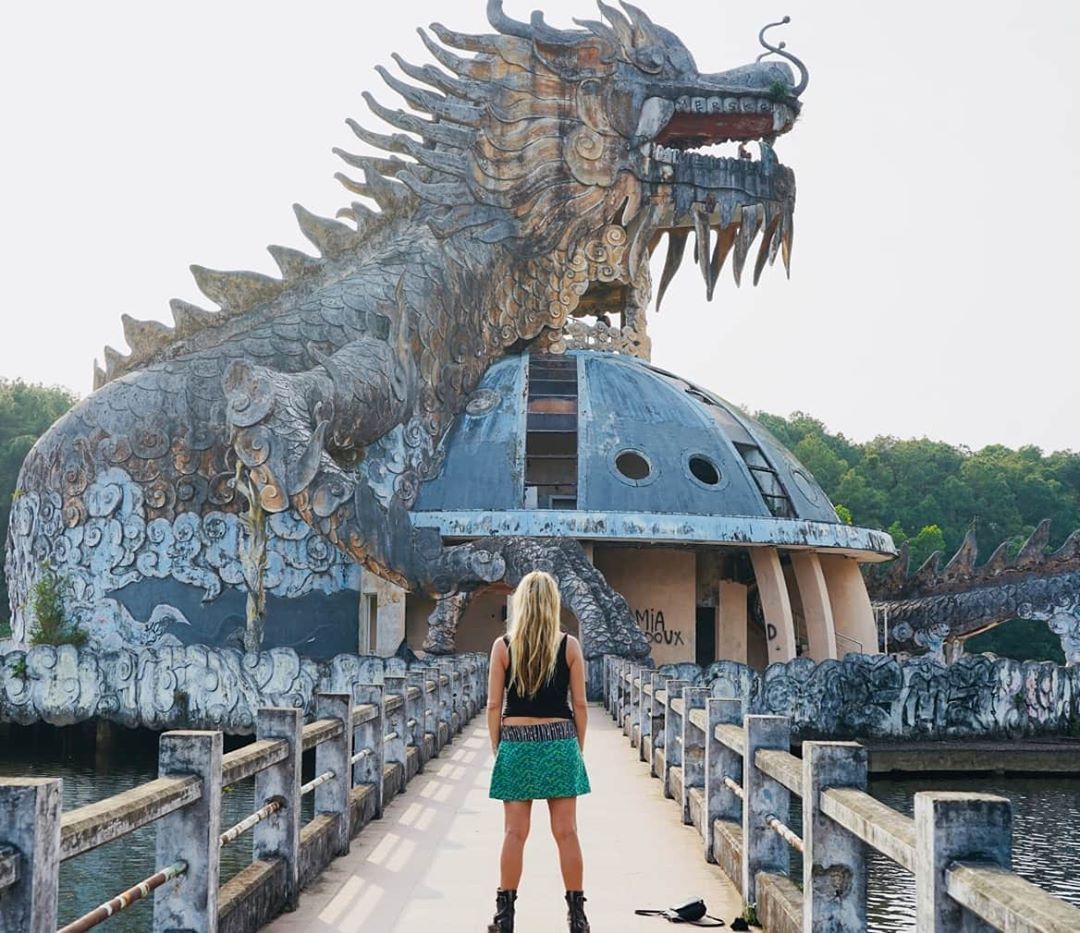 On Instagram, there are thousands of photos from foreigners sharing about the charming and mysterious beauty

Desiring to discover the mystery of Thuy Tien Lake Park, the 25-year-old girl Le Phuong Thy from Da Nang planned to visit here. It was a cloudy afternoon, and the hill space was as wide as a maze, so Thy had to find her way by herself and walked for a long time to reach the destination. 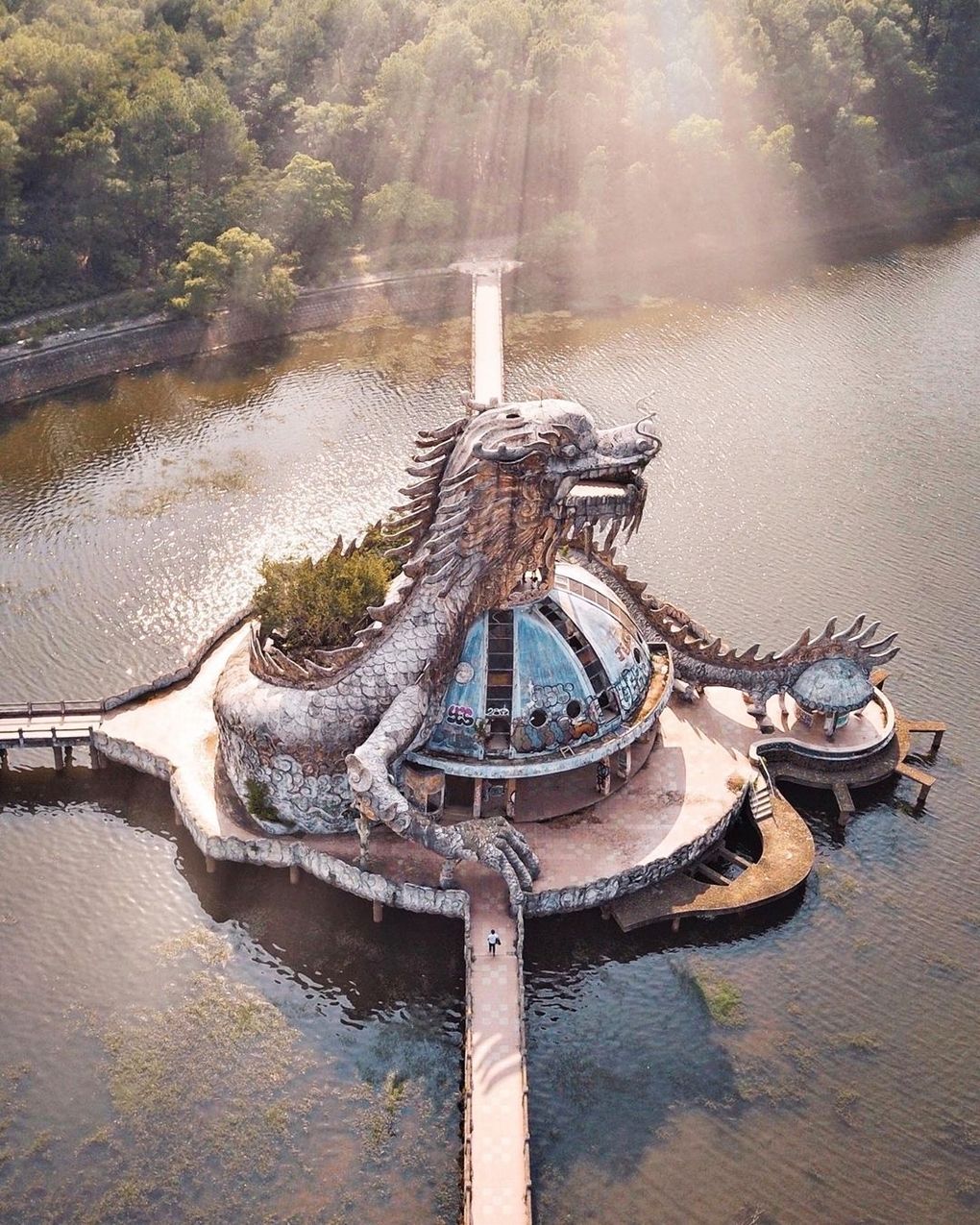 The first thing that startled her was a giant dragon located in the middle of a large and muddy lake on a lonely pine hill. She remembered it was around 16:00 o'clock; it was cloudy as if the rain was coming, and there were about 1-2 people also visiting. This gloomy atmosphere made her feel scared. 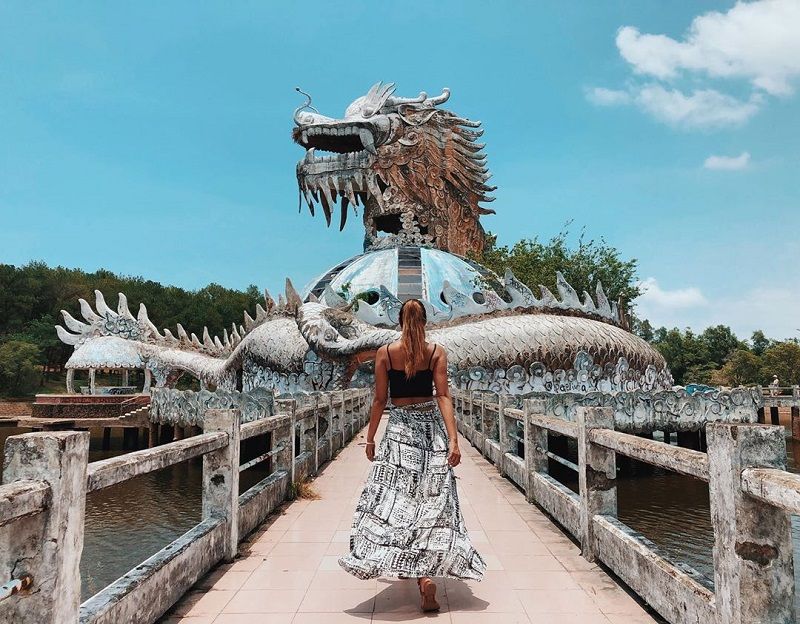 After visiting outside, Thy started to cross a bridge to go deep inside the dragon's body. Everything inside is summarized in one word “ruined", because all the entertainment facilities have been shut down and seriously damaged for so long. The dragon-shaped building was covered with moss while the ceiling was broken into large pieces, just like watching a horror movie. 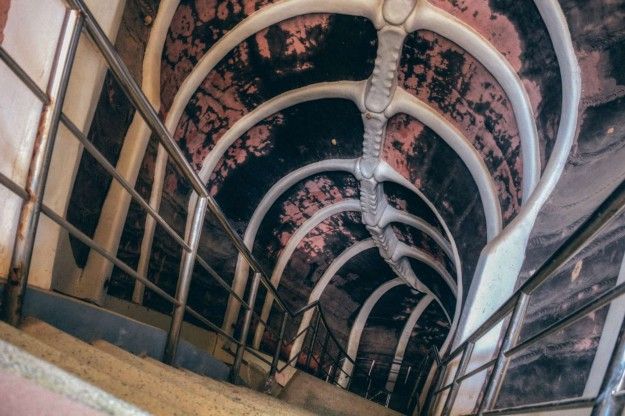 The entrance to the aquarium is murky. Photo: medium.com.

The deeper you go inside, the more creepy the scene becomes. The power outlets and the circuit breakers were full of spider's web or broken. The indoor game area was also abandoned with rusted game machines lying on the dirty floor with a pile of crumbling steel inside. 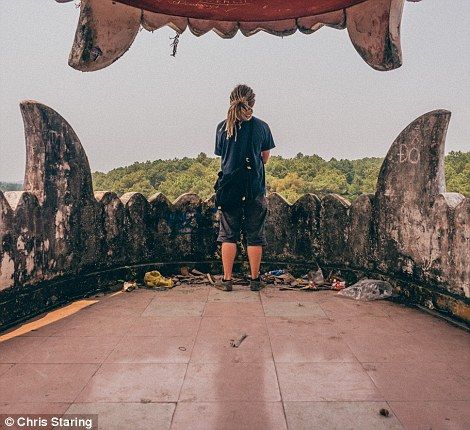 In the back, the area of the sculptures appeared, and she guessed this was also the area of the water park. There used to be a crocodile farming area, but it no longer exists. After the park was abandoned, wild crocodiles were brought back to the animal reserve. The girl went up a dark staircase to reach the dragon mouth area. From here, you can see a panoramic view of the ruined Thuy Tien Lake - mossy and quiet enough to make visitors a bit scared.

Another work creating the mysterious feeling for Thuy Tien Lake is the water park near the aquarium. Visitors will have to cross a forest with rows of tall coconut trees and lush green grass up to their knees underfoot. The long slides were covered with green moss, and the clear lake in the old days was also cloudy and dark, making the space here creepy. 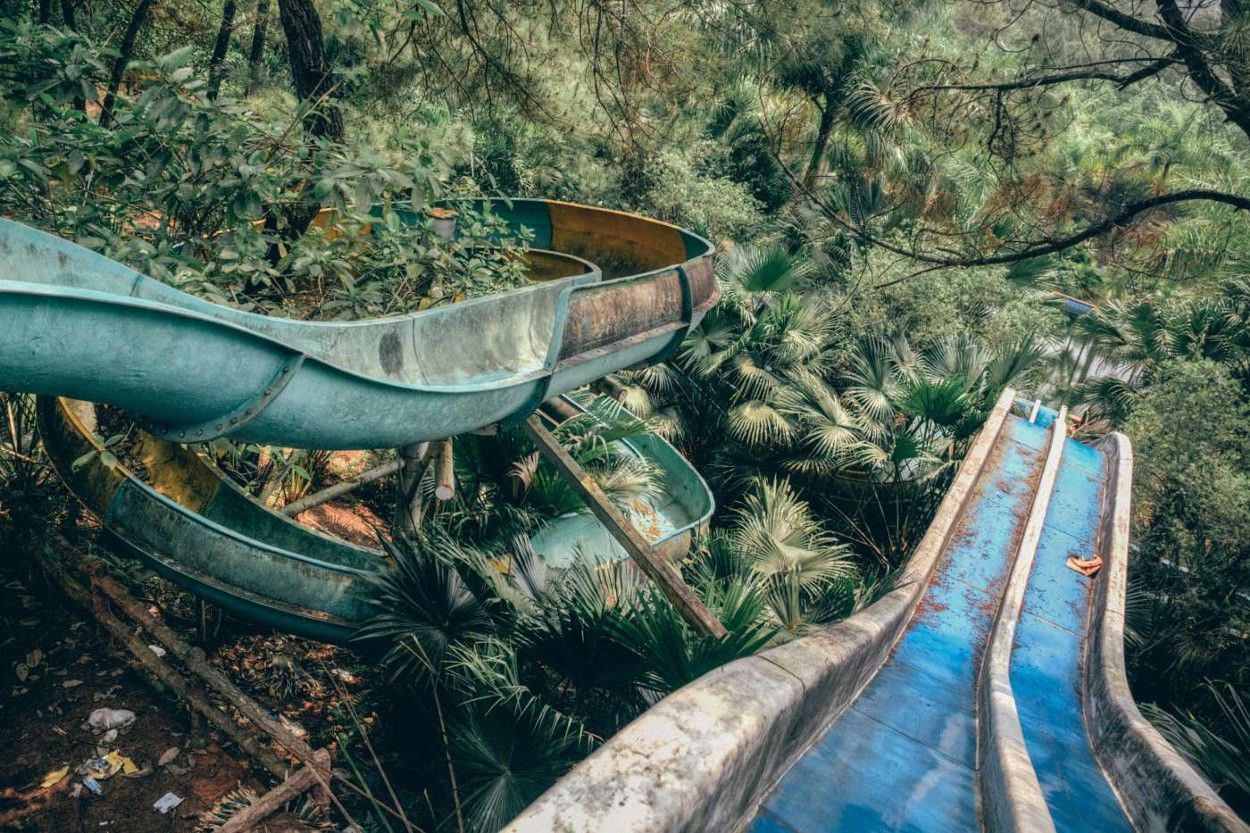 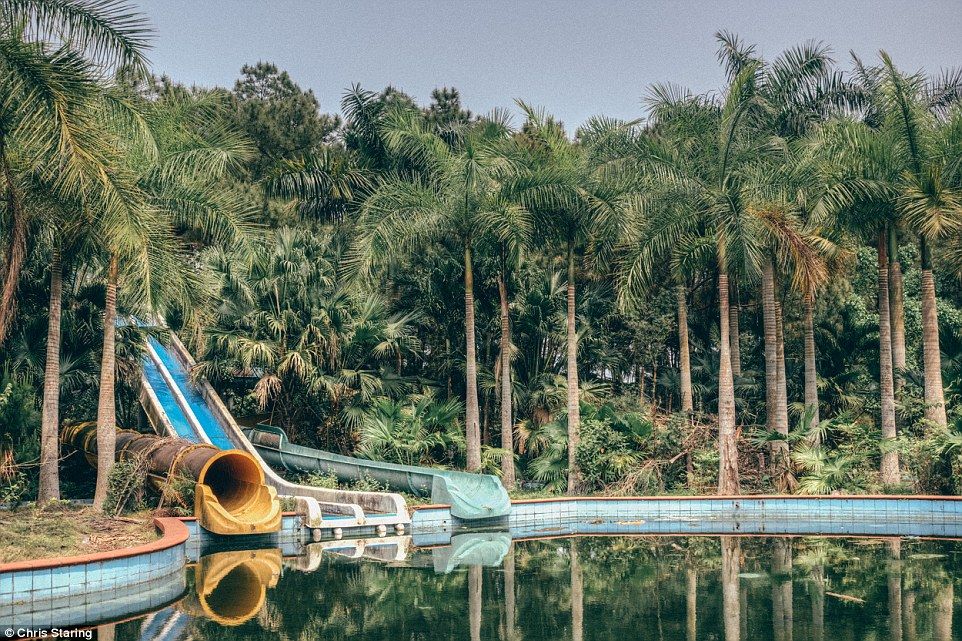 The most desolate place is probably the super-wide water music stage area. The benches with a capacity of up to 2,500 seats were filled with weeds, while the stage area was also covered by moss. Seeing the scenery here, it is impossible to imagine the splendor of the music performances when it is put into operation. 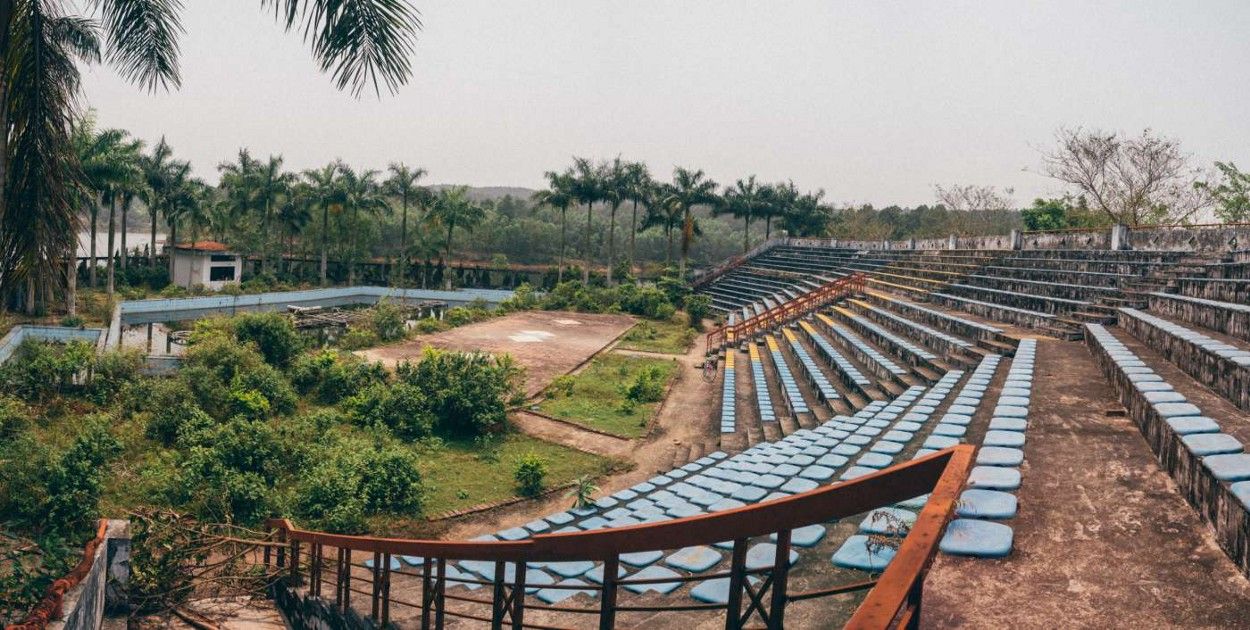 Visiting Thuy Tien Lake made Thy feel like she was stepping into a horror movie with ghostly, gloomy and desolate scenes. This will be a worthwhile experience for those who love to explore and adventure.

A small note is that if you want to enter here, you need to pay a fee of VND 10,000 for security even though this place is no longer open. The parking fee is VND 5,000/vehicle. 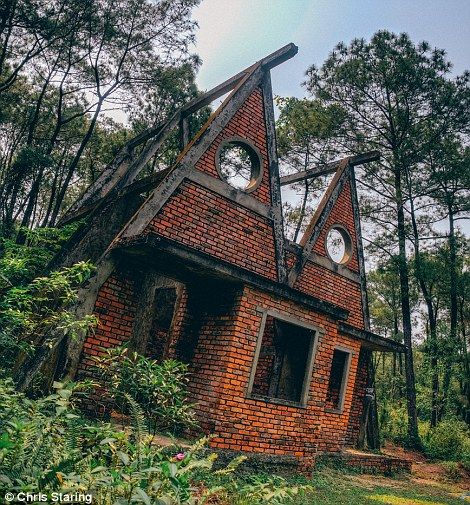 The abandoned house next to Thuy Tien lake makes this place even more ghostly. Photo: Dailymail

Thuy Tien Lake is ghostly and overcast, but more tourists have come here than it was in the past. The attractiveness of the park has spread widely and has formed an impressive highlight for visitors desiring to explore a mysterious and magical place right in the ancient capital of Hue.