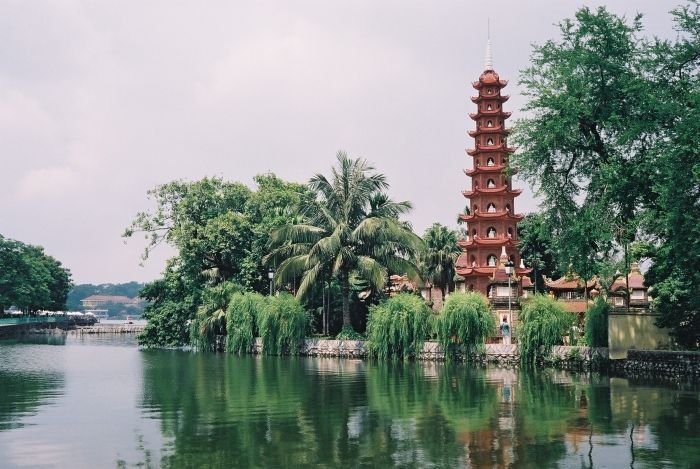 Legends of the 3 most sacred ancient pagodas in Hanoi

Visiting Hanoi - the land of thousands of years of civilization, tourists cannot ignore ancient pagodas. With a rich culture and history, the three temples below are always attractive to those who love to explore the spiritual culture in the capital of Vietnam.

Phuc Khanh Pagoda, located at 382 Tay Son street, Thinh Quang ward, Dong Da district, Hanoi, is considered as a sacred ancient pagoda based on the “Bac Tong” sect that visitors should visit when coming to Hanoi. Also known as So pagoda, it was built in the Hau Le dynasty to commemorate King Quang Trung, but later was completely destroyed by a fire. There are documents claiming that Phuc Khanh pagoda was located in the area where the Dong Da battle took place in 1789, leading to its destruction. After that, it was rebuilt by monk Chieu Lien with the support of Admiral Tran Van Le (Tay Son period), and the pagoda is also the place where his army hid. 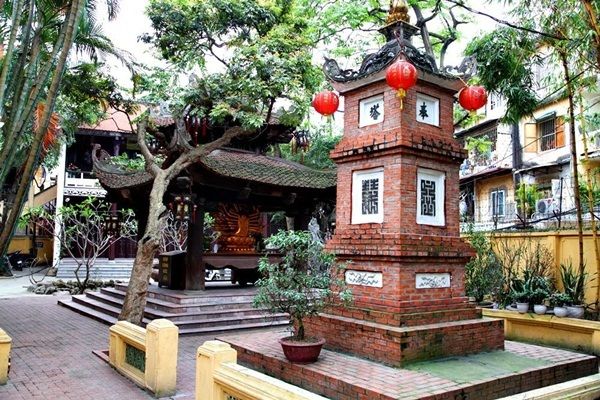 Phuc Khanh Pagoda is a sacred ancient pagoda based on the “Bac Tong” sect. Photo: vietnamnet

In terms of architecture, the pagoda has traditional designs and works related to Buddhist worship, such as Three Gates with 3 arched doors (1 large door in the middle and two small doors on two sides) with crocodile-shaped pillars. Passing Three Gates, you will see a large courtyard. The Buddha Hall includes Tien Duong and Hau Cung. Specifically, Tien Duong has 5 compartments, and there is an embossed picture of three Chinese letters "Hoanh Kim Dien" (Golden Dragon Palace) in the middle of the roof. The rafters and pillars are meticulously engraved with themes such as chrysanthemum, conifers, cranes and lotus. Meanwhile, Hau Cung has 3 simple rooms. The shrine is used to worship the abbot who had passed away. There are a lot of artifacts here with 20 statues carved in the eighteenth century featuring the Tay Son art style and 21 stone steles (the earliest is Chinh Hoa 19 stele in 1698).

The current abbot of the pagoda is Venerable Thich Thanh Quyet.

A small corner in the campus of Phuc Khanh Pagoda Photo: travel360.vn

One of the reasons which makes the pagoda a destination for many Buddhists is its sacredness. Many people come here to pray for luck or getting rid of bad things for themselves and their families. You can visit Phuc Khanh Pagoda on the New Year's "Great Ceremony for peace of all families" which takes place on the evening of January 14th of the lunar calendar annually. Besides, the annual ceremonies for luck on January 8, 15 and 18 are also interesting opportunities for you to visit the pagoda and admire the bustling and sacred scene. 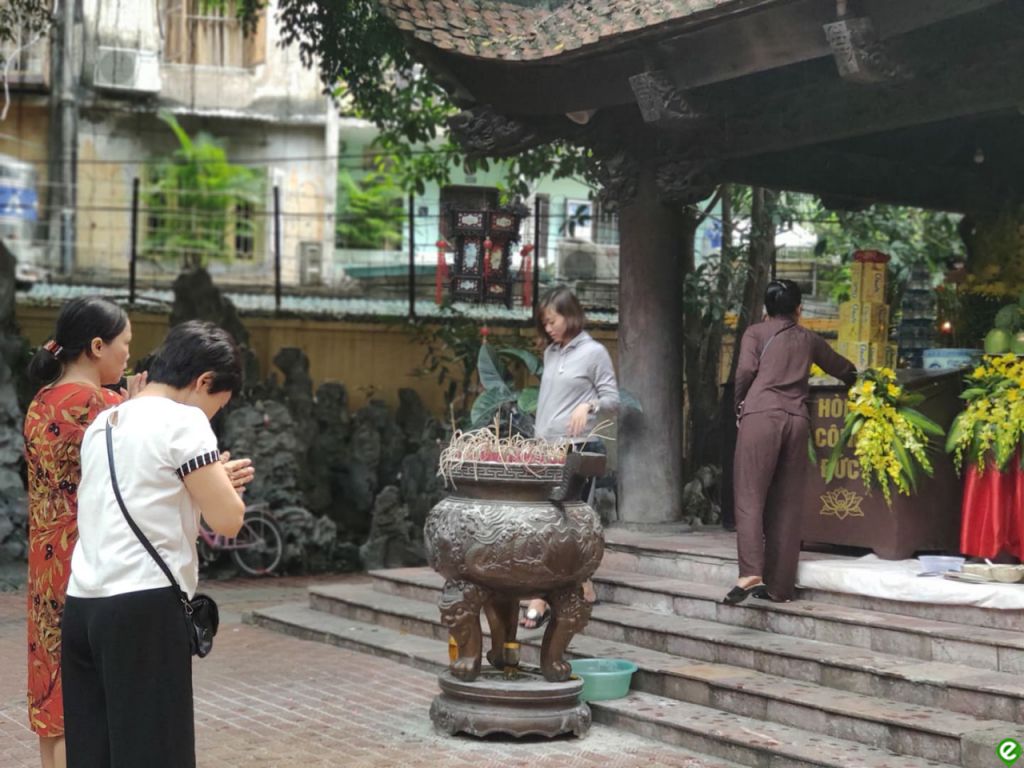 To go to Phuc Khanh Pagoda, you can choose a motorbike, bus or car. In particular, you can get in buses Number 2, 16, 24, 27 with a cost of less than VND 10,000/turn. It is noted that you should park your private vehicle outside then walk inside lightly and speak quietly to ensure the pagoda’s silence and sacredness.

Tran Quoc Pagoda is located on Thanh Nien Street, Yen Phu Ward, Tay Ho District, Hanoi City. It is noted that the pagoda is on an island to the East of West Lake, creating a charming scene. With a history of nearly 1,500 years, it is considered the oldest pagoda in Hanoi. 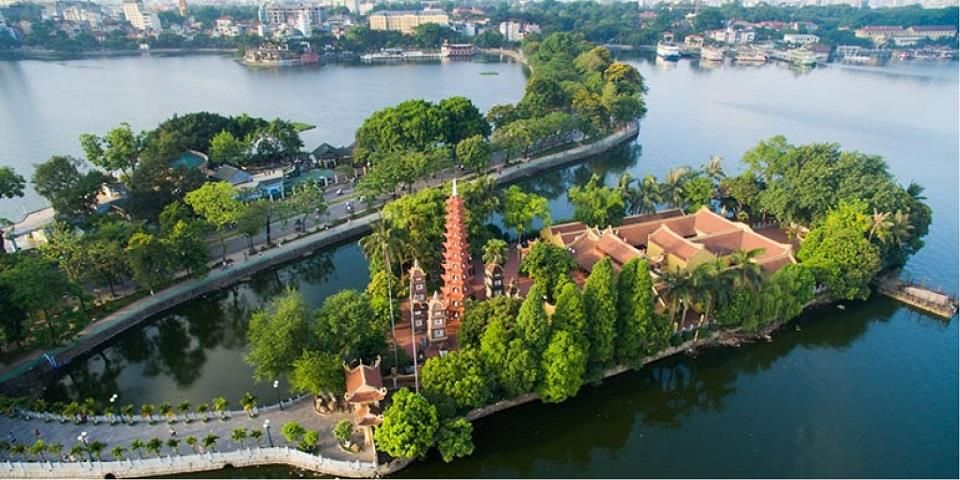 Tran Quoc Pagoda is located on an island to the east of West Lake. Photo: vietravel

It is stated in the Dictionary of Vietnamese Cultural Monuments (Hanoi, 1993) that the original name of Tran Quoc Pagoda was Khai Quoc from Tien Ly period (Ly Nam De, 541-547), which was in Y Hoa village, near the shore Hong river. Until the Le Trung Hung reign (1615), the pagoda was moved inside Yen Phu dyke on the old foundation of Thuy Hoa (Ly dynasty) and Han Nguyen palace (Tran dynasty), then was restored and expanded in 1624, 1628 and 1639. First Doctoral Candidate Nguyen Xuan Chinh composed an epitaph at the pagoda in 1639 about this establishment. In 1821, King Minh Mang visited the pagoda and gave 20 ounces of silver for repairing it. In 1842, King Thieu Tri visited the pagoda, gave a large gold coin and 200 “quan" (an old Vietnamese unit of money measurement) and renamed the pagoda to Tran Bac. The name Tran Quoc has been called since the reign of King Le Hy Tong, so people have kept using it until now. 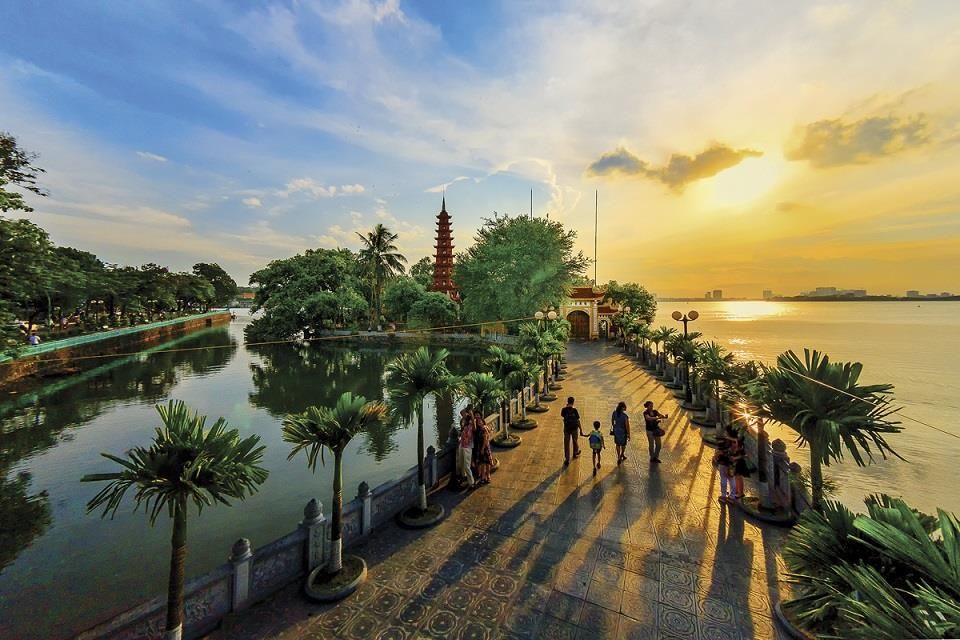 The road to the pagoda is airy, beautiful, dreamy. Photo: vietravel 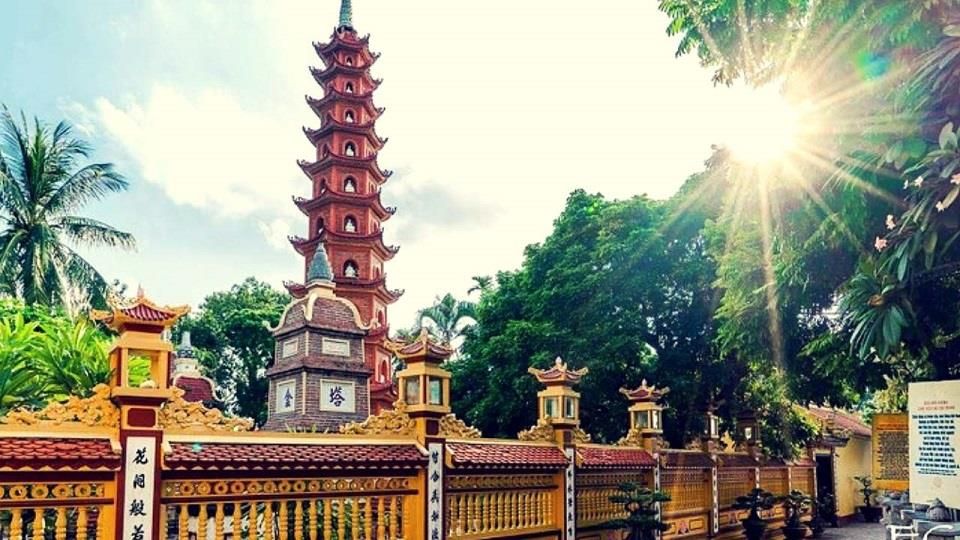 Lotus tower with a height of 15m with 11 small floors in the pagoda. Photo: vietravel

The architecture of Tran Quoc pagoda follows the general rules of Buddhism, including many layers with three main houses: Tien Duong, Thieu Huong and Thuong Dien in the shape of a “Cong” letter. Tien Duong faces the west, while Thieu Huong and Thuong Dien are two corridors. Behind Thuong Dien is the bell tower with three rooms located on the main hall. Behind the pagoda, there are some ancient tombs from the Vinh Huu and Canh Hung dynasties (18th century). The highlight in the architecture of Tran Quoc pagoda is the appearance of the Lotus tower with a height of 15m, equivalent to 11 floors. Each floor of the tower is divided into 6 arched doorways, each of which includes a gem statue of Amitabha Buddha. Atop the tower is a 9-storey lotus made of precious stones as well.

With the typical architecture of Buddhism combined with the airy and harmonious natural landscape of West Lake, Tran Quoc Pagoda was nominated as one of the 10 most beautiful pagodas in the world by the website Wanderlust of the UK in 2019.

Tran Quoc Pagoda was nominated as one of the 10 most beautiful pagodas in the world.

On weekdays, full-moon days or festivals, Tran Quoc Pagoda in Hanoi is always full of visitors, especially international ones coming to pray for peace and happiness, while praying for fortune is often on the first days of new year.

Tran Quoc Pagoda is located on Thanh Nien Street, Yen Phu Ward, Tay Ho District, Hanoi. To go to the pagoda to visit or pray, visitors have a wide range of means of transportation such as motorbikes, cars and buses. There is a parking lot near the pagoda, so you can ride a motorbike for convenient travel and freely admiring the surrounding scenery. For buses, you can choose the bus number 30 or 50. If you are traveling with a large number of people or a whole family with children, you should take a traditional taxi or a motorcycle taxi.

Before visiting, you should also inquire about the opening time in advance. The pagoda opens at 8am and closes at 4pm with the price ticket at VND 5,000/person/time (2020).

The best time to visit the pagoda is at the beginning of the year, as there are many ceremonies such as getting rid of bad luck festivals, Buddha's Birthday and Vu Lan. 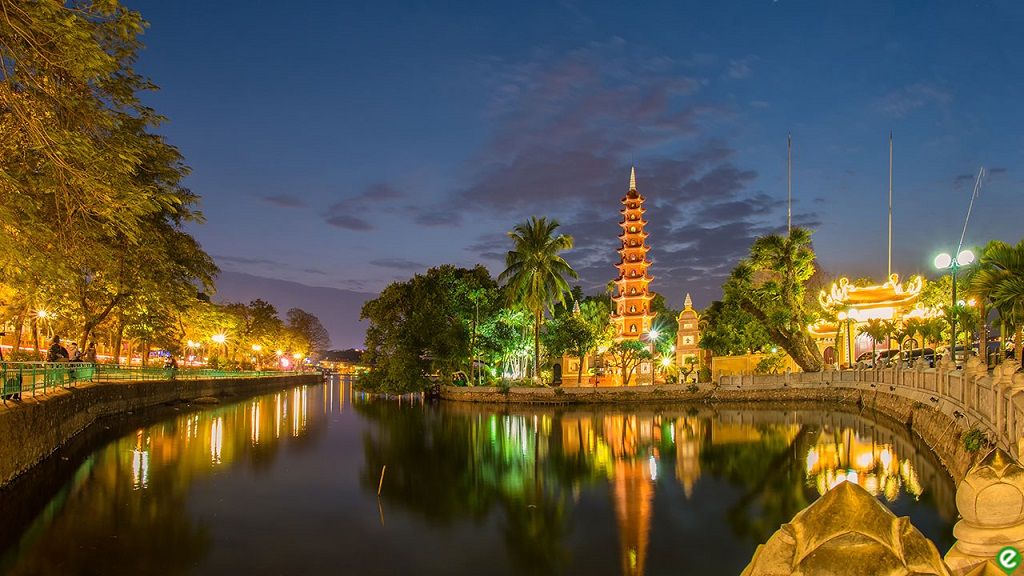 Tran Quoc Pagoda - The Lotus of Buddhism in the heart of the capital. Photo: Wikipedia.org

It is said that in the Ly dynasty, Dich Vong had many famous landscapes. King Ly Thanh Tong (reigned 1054-1072) still had no children at the age of 42, so he went to a pagoda to pray for a child, and then he had Prince Can Duc. On the way to the palace, the king also stopped by another pagoda and gave money for restoration, so this pagoda was also called Thanh Duc. Thanh Duc pagoda was destroyed many times in wartime. Until 1680, the pagoda was still constructed of leaves and bricks, leading to its alternate name “Vo”. In the reign of King Le Hy Tong (1675-1705), two people from Tho Ha village, Bac Giang province, came to the pagoda to live and sell pottery at markets inside and outside Thang Long citadel. Thanks to their successful business, they donated a large amount of money with people in the village to rebuild the pagoda on a large scale with bricks and tiles in 1680. Since then, the two villages Tho Ha and Dich Vong Trung became “friends”, naming the villages “Boi Ha'' and the pagoda “Ha”. 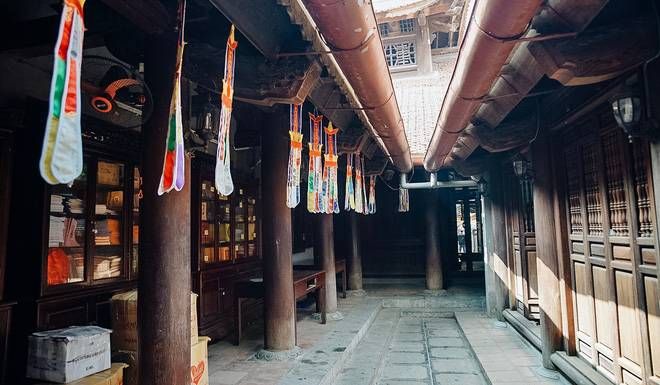 Wood is the main material of the pagoda, making it quiet and ancient. Photo: Kenh14.

The architecture of Ha pagoda is based on the "Dinh" letter overlooking the West, which is in accordance with the rules of yin and yang and good feng shui. Outside is the “celestial pillar” carved with the phoenix and the tiger with parallel sentences. Next to the celestial pillar is a small gate written Boi Ha Mieu (possibly this is the first name of Dinh Boi Ha). Going through the gate, you can see the second celestial pillar (carved with a couple of lions) separating the courtyard into a large and a small part. The pagoda’s campus is large and ancient with many green trees, creating an elegant atmosphere. 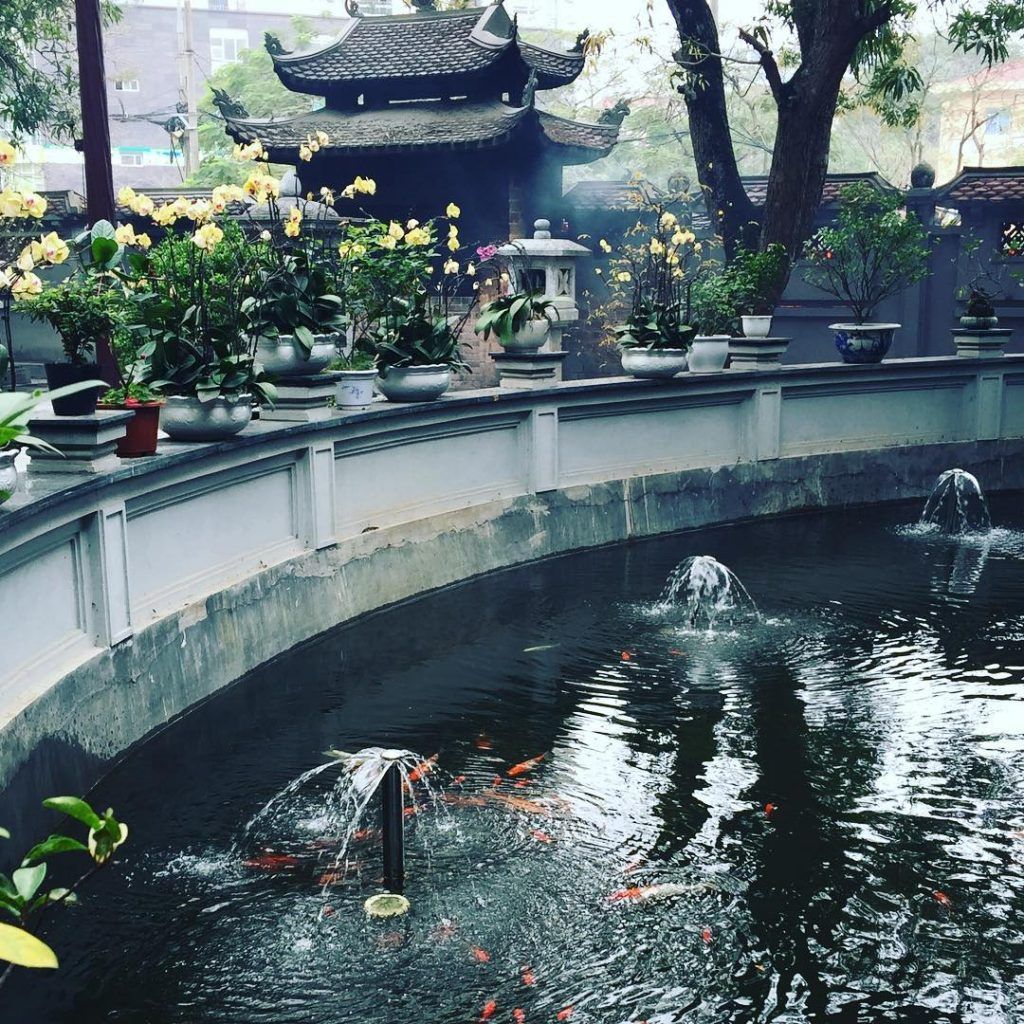 The campus is open with trees and a lake. Photo: luxstay

Outstanding Buddhist architecture, a history of thousands of years and mysterious stories of sacredness are the highlights of the three pagodas: Tran Quoc, Ha, Phuc Khanh, which will help visitors somewhat better understand the spiritual culture of the capital of Vietnam.