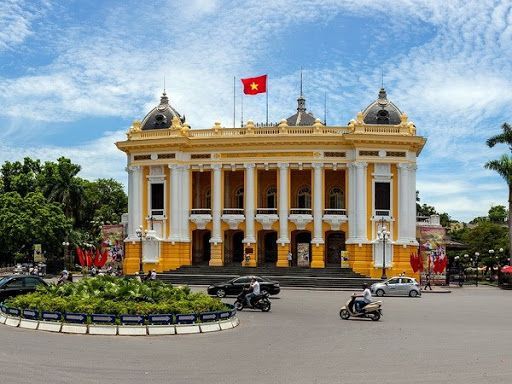 The three tourist attractions with a long history of Hanoi

With the unique, peaceful, romantic and modern beauty in different seasons, Hanoi leave visitors unforgettable memories. When visiting Hanoi, besides famous sightseeing places, you should not miss the following tourist destinations with historical and cultural values.

The Imperial Citadel of Thang Long is a complex of relics associated with the history of Thang Long - Dong Kinh and Hanoi from the pre-Thang Long period (The Colonized Annam in the 7th century). The citadel was constructed in the Dinh - Tien Le period, and it has existed through thousands of years through the Ly, Tran, Le and Nguyen dynasties until today. This place has an area of up to 20ha, including archeology 18 Hoang Dieu and many relics in the ancient ruins of Hanoi today. 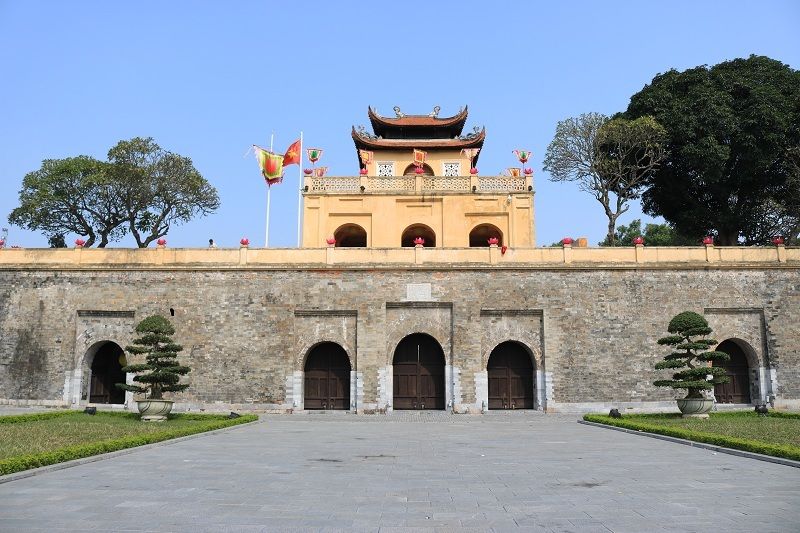 The front of the Imperial Citadel of Thang Long today. Photo: baoxaydung

In the first stage when it was newly built, Imperial Citadel of Thang Long included La Citadel in the outer of the capital along 3 rivers of Hanoi, namely Red River, To Lich River, and Kim Nguu River; in the middle is the Imperial Citadel and the innermost position is Tu Cam Thanh. In 1789, after King Quang Trung moved the capital to Phu Xuan (Hue), only Bac Thanh was left here. Until the establishment of the Nguyen Dynasty, there were only Dien Kinh Thien and Hau Lau left, and the rest were moved to Phu Xuan. Until 1805, the old Thang Long Citadel was rebuilt by King Gia Long in accordance with the French vauban style, and was named Hanoi Citadel. After the Governor-General of Indochina was occupied by the French, the Imperial Citadel of Thang Long became a French barracks, and in 1945 was under the management of the Ministry of National Defense of Vietnam. 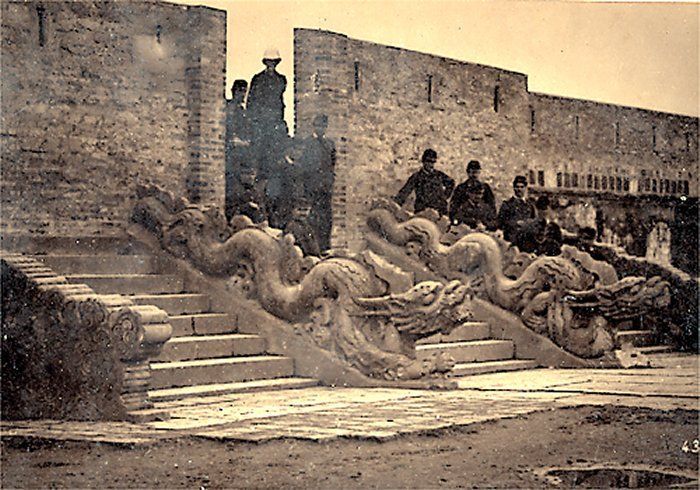 The architectural style of the central monument of Thang Long Citadel is considered the pinnacle of contemporary architecture. Not only is it appreciated for the large scale with many magnificent palaces, but the architecture here is also praised by artistic values. History books describe palaces carved with many unique and skillful shapes, together with beautiful and delicate sculptural wooden works which have never existed before. Another highlight of Thang Long Citadel architecture is the use of various types of roofing tiles such as: yin-yang roofing, flat and roof tiles, and typical roof top decorations such as terracotta lion, phoenix or dragon. 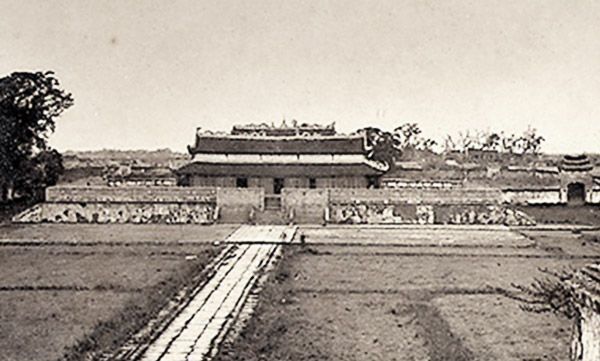 During the different dynasties, the architecture of the Imperial Citadel of Thang Long was also changed. For example, in the Le dynasty, the roof tiles were glazed with green and yellow colors to increase the aesthetics. In addition, a number of different areas in this place owns the Western architecture, such as the Dragon house built by the French in 1886. 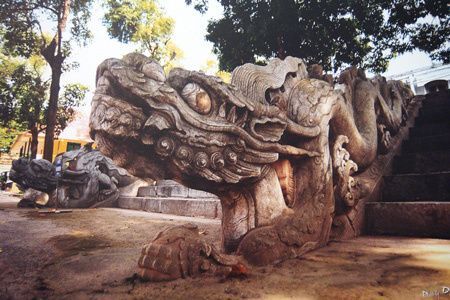 The relics of the Imperial Citadel of Thang Long have existed for more than 13 centuries, and it is considered to be a proof of Vietnamese culture in the Red River delta. Thanks to the architecture and heritages, the historical events can be reflected through each feudal dynasty of Vietnam. 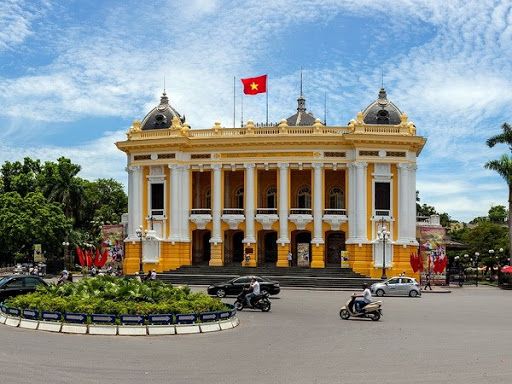 Hanoi Opera House is one of the symbols of architecture of Hanoi. Photo: baoquangninh

Hanoi Opera House is a typical architectural work of Vietnamese capital, which is located at 1A Trang Tien Street, Trang Tien Ward, Hoan Kiem District, Hanoi City on the August Revolution Square. It was designed by the two architects Harlay and Broyer, and then started to be constructed in 1901 and completed in 1911 with the same architecture as the Opéra Garnier Theater in Paris - but in a smaller scale and suitable materials with the local climate. The work was restored from 1995 to 1997 in preparation for the Summit of the Francophone Community. 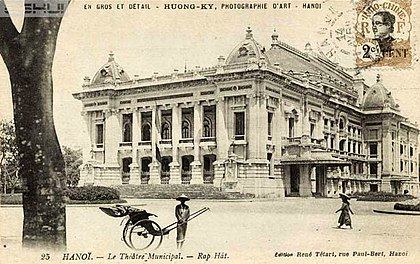 The architecture of Hanoi Opera House was based on the neo-classical French style with two-piece roofing with black stone tiles and decorative motifs inside. The horseshoe-shaped layout for the large room, the entrance to the hall, the main staircase, and the organization of these theatrical spaces are all like the theaters in Europe in the early twentieth century. The Opera House consists of 3 floors with 3 main areas: main hall, audience room and mirror room. 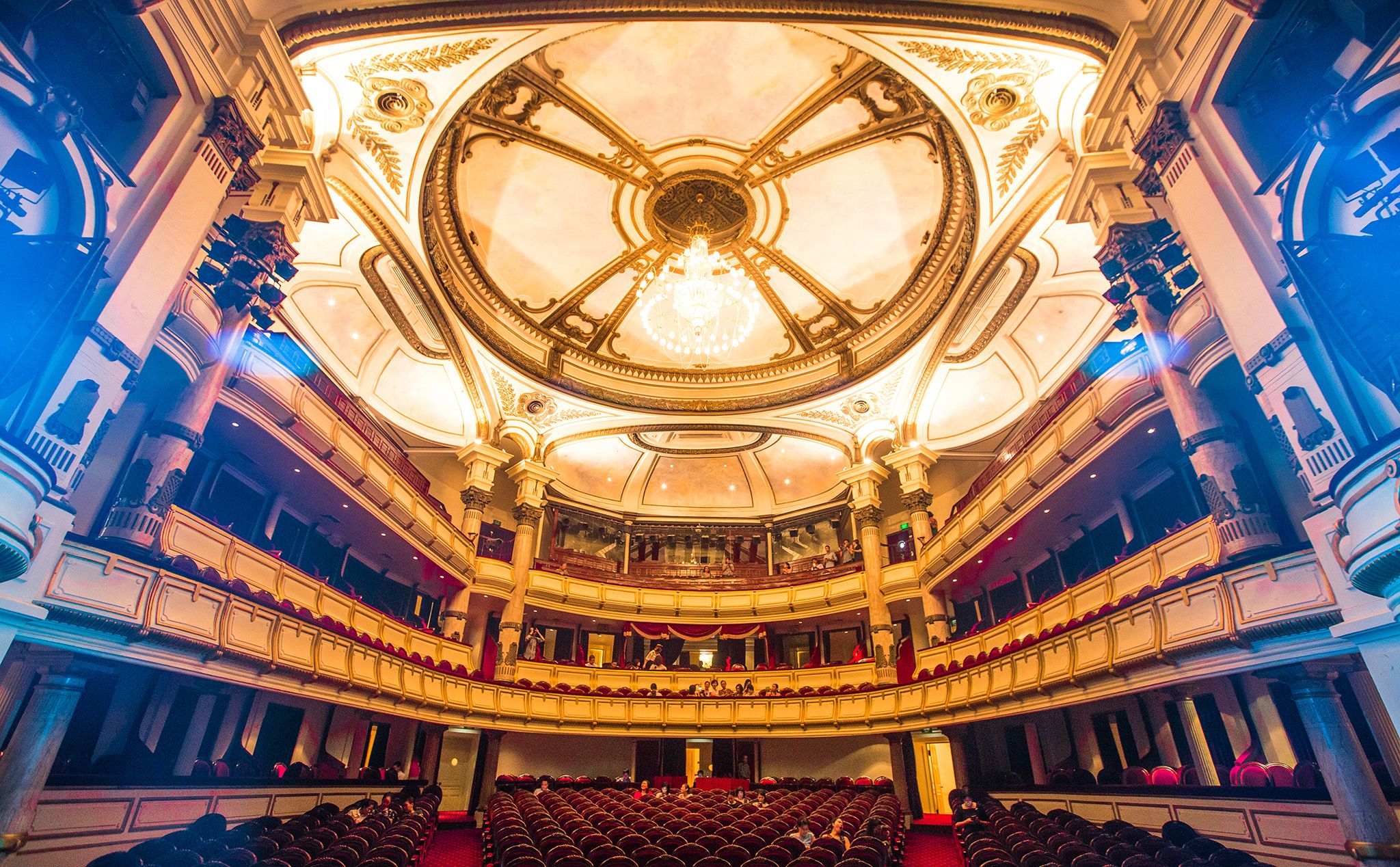 The great hall of the Opera House. Photo: hanoitv

Since its completion, Hanoi Opera House has acted as one of the important cultural centers of the capital - where the cultural activities and performing arts take place. This is also the birthplace to honor Vietnamese theater and other arts such as choral, classical music and symphony. The Hanoi Opera House has become a proof of a historic period of cultural integration.

Visiting Hanoi without coming to Hanoi Cathedral is really a big mistake. Hanoi Cathedral, also known as St. Joseph’s Cathedral, is located at 40 Nha Chung, Hang Trong, Hoan Kiem, Hanoi. This is the main cathedral of the Archdiocese of Hanoi - and also the old church of the capital - where religious activities of the parishioners in the region and the whole country regularly take place. 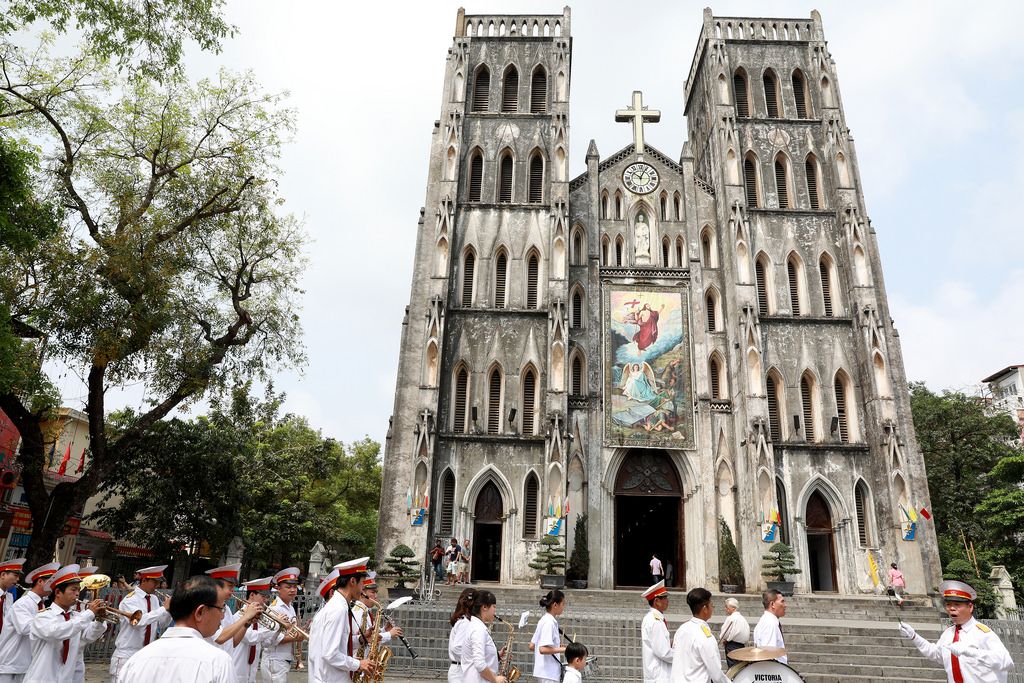 According to the book "Dictionary of Hanoi Street" by Hanoi University, the former Hanoi Cathedral site belongs to Bao Thien pagoda's campus built in the Ly dynasty. At that time, this place held Buddhist rituals to pray for the nation's peace. At the end of the 18th century, the pagoda was destroyed, and the old temple foundation became a market place before the construction of the church. At first, the church was built temporarily from wood, and then from 1884 to 1888, the Catholic Church proceeded to build a brick church by asking the French government to open a lottery to raise funds. The inauguration of St. Joseph's Cathedral was held at Christmas in the year of Dinh Hoi (1887). 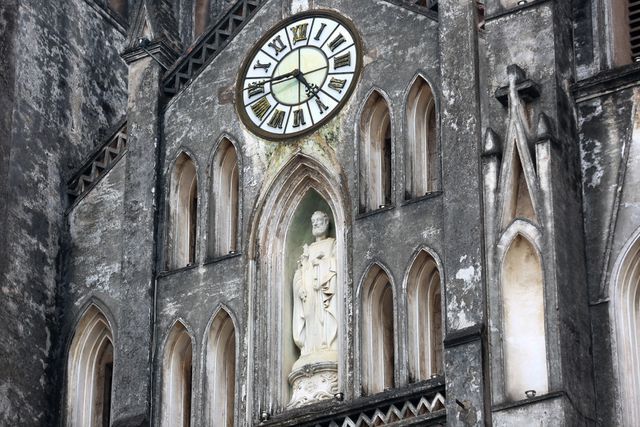 Hanoi Cathedral has a medieval European Gothic architecture which prevailed in the 12th century.

Hanoi Cathedral has the medieval European Gothic architecture which prevailed in the 12th century during the Renaissance period in Europe. The cathedral’s architecture stands out with its wide and curved dome facing the sky with terracotta bricks and plastered walls. The church has a width of 28.5m and a length of 79m with large stone pillars with four corners and a stone cross on the top. In the cathedral, there are a set of doors, one large and two small; the doors are curled up according to Gothic art, combining with impressive sainted glass paintings. 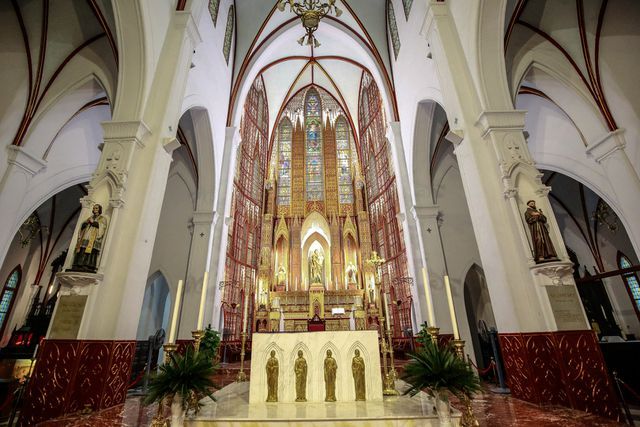 If you want to visit Hanoi Cathedral, you should choose the time from 8:00 to 17:00 daily.

Hanoi is a land with a long history typical of Vietnam through different periods of time. Visiting the Imperial Citadel of Thang Long, Hanoi Cathedral or Hanoi Opera House, visitors will partly understand more about historical and cultural values through the places that still have been around today.