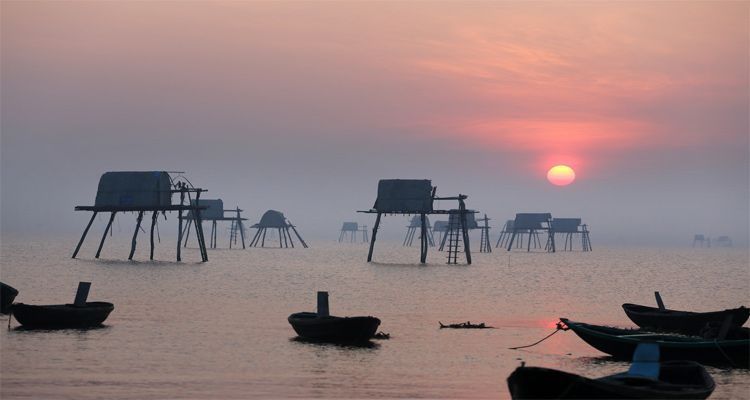 Seven attractive destinations in Thai Binh you must visit

Thai Binh is famous for the name "rice hometown" with endless stretches of fields and many attractive tourist attractions.

Thai Binh is a coastal province in the Red River Delta with fertile soil which is always alluviated all year round. Although this area has not focused much on developing its tourism as other provinces in the S-shaped country, many tourists have chosen Thai Binh as the ideal destination in recent years thanks to its diverse culture, history and cuisine.

Located about 45km from Thai Binh city to the east, Con Vanh eco-tourism area belongs to Nam Phu commune, Tien Hai district. Compared to the beaches in the North of Vietnam, Con Vanh has won the hearts of many tourists due to its wild beauty and peaceful scenery with about 6km of sand stretch. The beach attracts visitors thanks to its green casuarina rows and beautiful purple morning glory. The sand is quite smooth while the sea level is not too deep - very suitable for swimming or participating in activities such as playing volleyball or having BBQ parties. 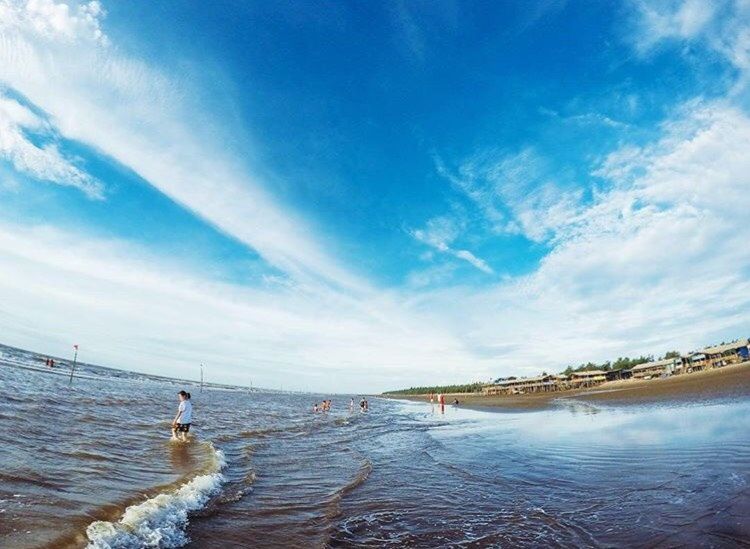 As one of the branches of the Red River Delta biosphere reserve, Con Vanh also owns a rich mangrove ecosystem with more than 200 different species of seafood and rare birds, giving visitors the feeling of being lost in a different world. 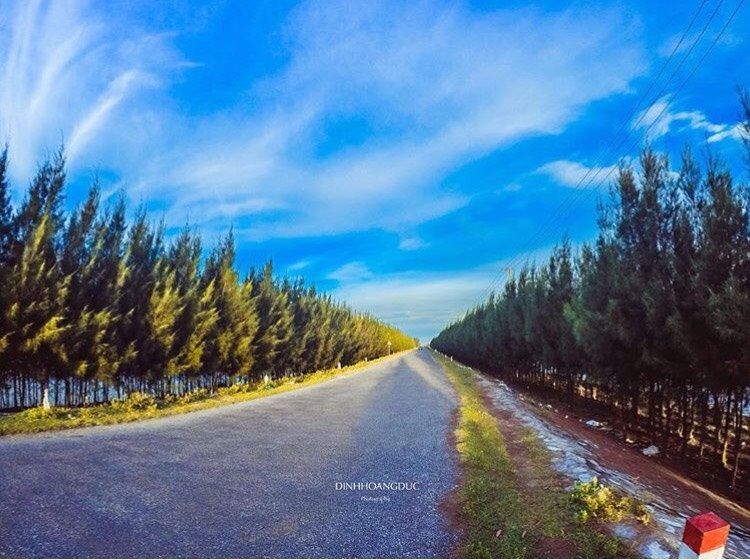 The road to Con Vanh is surrounded by green trees on two sides of a romantic road.

Keo Pagoda, located in Duy Nhat commune, Vu Thu district, Thai Binh province (Than Quang Tu), is one of the few pagodas in Vietnam that still retains its ancient beauty. It is said that during the reign of King Ly Thanh Tong, Keo pagoda was built by Zen monk Duong Khong Lo on the bank of the Red River in 1061 in Giao Thuy, Ha Thanh (currently in Giao Thuy district, Nam Dinh province). Initially, the pagoda was named Nghiem Quang Tu, and the ancestor of the pagoda was Ly Trieu Quoc Su: Zen monk Nguyen Minh Khong (Khong Lo). In 1167, the pagoda was renamed Than Quang Tu. As Giao Thuy means Keo in Nom language at that time, the pagoda was also called Keo Pagoda. After nearly 500 years of existence, the pagoda was flooded due to rising water in the Red River in 1611. After that, some people here migrated and built a new pagoda called Keo Duoi (Keo Ha) pagoda in Xuan Hong commune, Xuan Truong district, Nam Dinh now. Also, in Dung Nhue village of Thai Binh, there is also another Keo pagoda called Keo Tren/Keo Thuong. 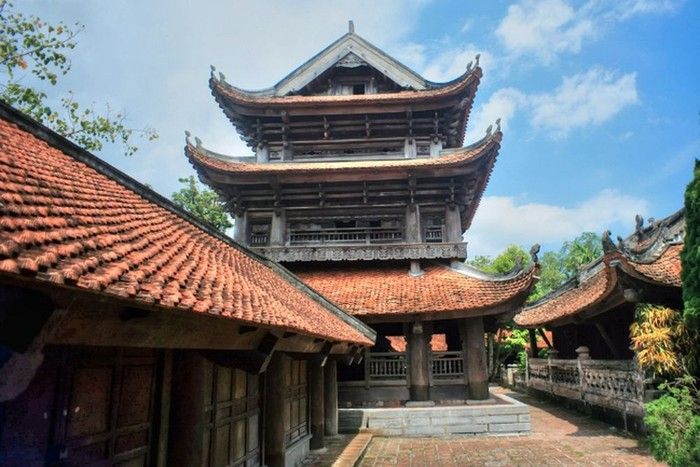 According to the stone stele in the pagoda, Keo is located on an area of 58,000 square meters with 21 works. Currently, this place still has 17 main works such as Three Gates, Buddhist temple, Holy temple, Bell tower, Corridor and Monastic area, etc. with more than 100 rooms, making it the ancient pagoda with the largest number of rooms remaining to date and the most diverse architectural complex of all Vietnamese Buddhist pagodas. More than 100 different large and small compartments are arranged into a balanced architectural block: Three Gates outside, Large Lakes, Three Gates inside, Buddhist pagoda, Holy temple and finally the Bell tower. The Bell tower with a structure in the shape of nearly 100 elephant heads is a “jewel” in Vietnam's architectural heritage. The pagoda also preserves hundreds of French statues and Le dynasty sacrifices. Although Keo consists of hundreds of buildings and rooms, its architecture is not monotonous. From above, roofs of the works with different width and height spread like waves. It can be said that Keo Pagoda was an art museum in the early 17th century with many unique “masterpieces”. 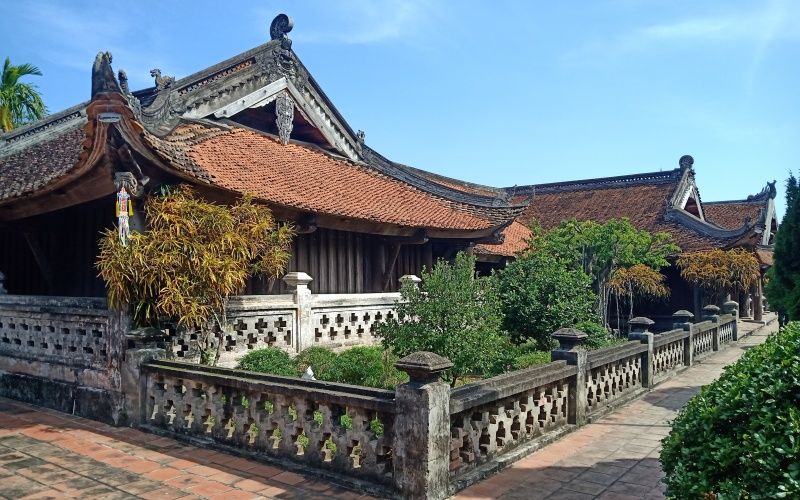 Although Keo consists of hundreds of buildings and rooms, its architecture is not monotonous.

Visiting the temple, you can see the precious worshiping objects that are said to be belongings of Zen Master Khong Lo such as the ivory rosary, the large lime pot and three golden shells that are considered to be picked up by Khong Lo when he was still a fisherman and used as water cups during his years of practice.

Every year on January 4th of the lunar calendar (around February of solar calendar), the local people hold a spring festival to attract tourists coming to visit and pray. 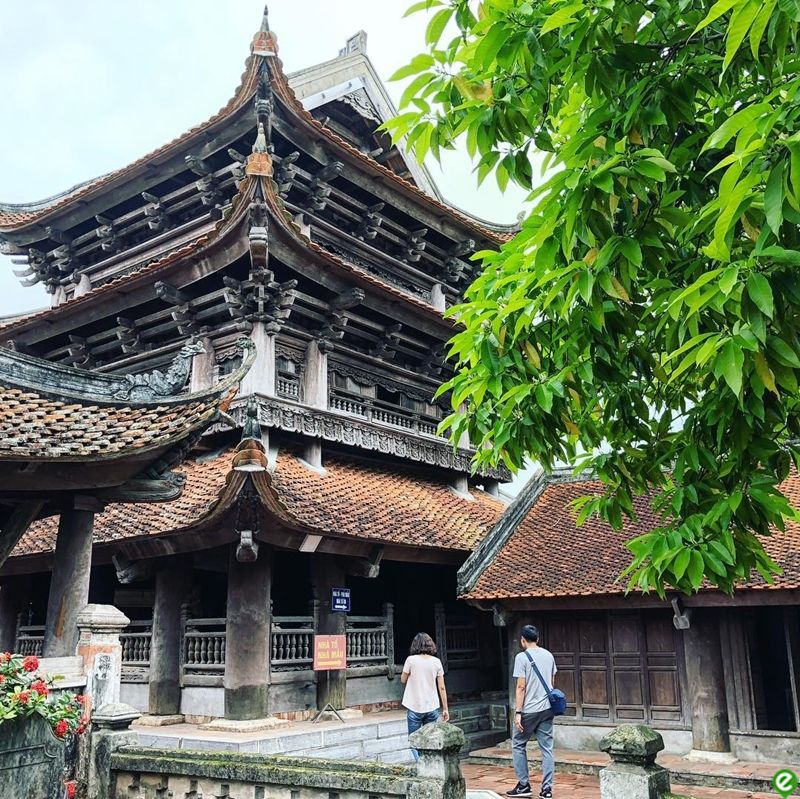 Besides Con Vanh, Con Den is also an attractive tourist destination that you mustn’t miss when coming to Thai Binh. Three kilometers from the mainland of Thai Do commune, Thai Thuy district, this place is 15km south of Diem Dien town and about 40km west of Thai Binh city center. Con Den is formed by the accumulation of alluvium of Tra Ly River under the impact of flow between the river and the hydrodynamics of the coastal area, creating a relatively flat terrain. 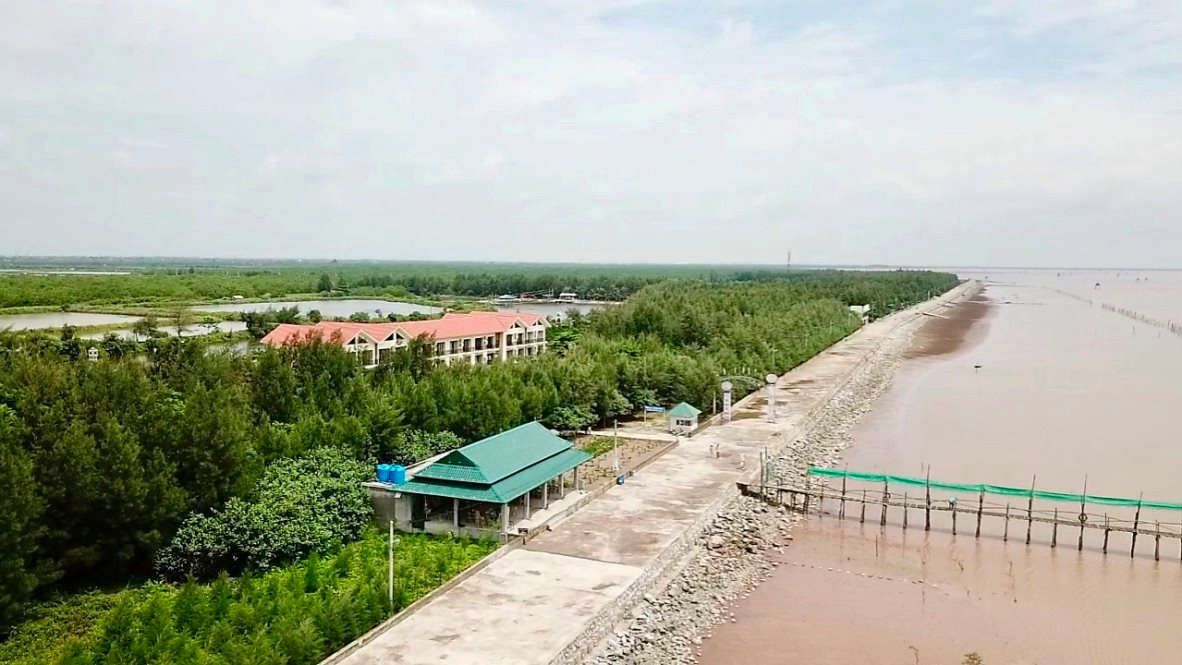 Con Den has relatively flat terrain with a 3km sandy beach, peaceful waves all year round and a wild landscape. You will have the opportunity to explore pristine vegetation and unique mangrove ecosystems. Along the sand dunes are rows of pines, while the pristine vegetation and unique coastal mangrove ecosystems (with plants such as nipa, beach morning glory, bruguiera gymnorrhiza, etc.) are in the inner area. The area currently has about 200 species of birds, including nearly 60 migratory birds, more than 50 water birds and rare species recorded in the World Red List such as “co thia”, gulls, “re mo thia” and “ca trang bac”. The mangroves here are not only "green walls" that protect the sea dykes and villages from storms, but also provide rich resources with 500 species of aquatic animals and sea grass with high economic value. 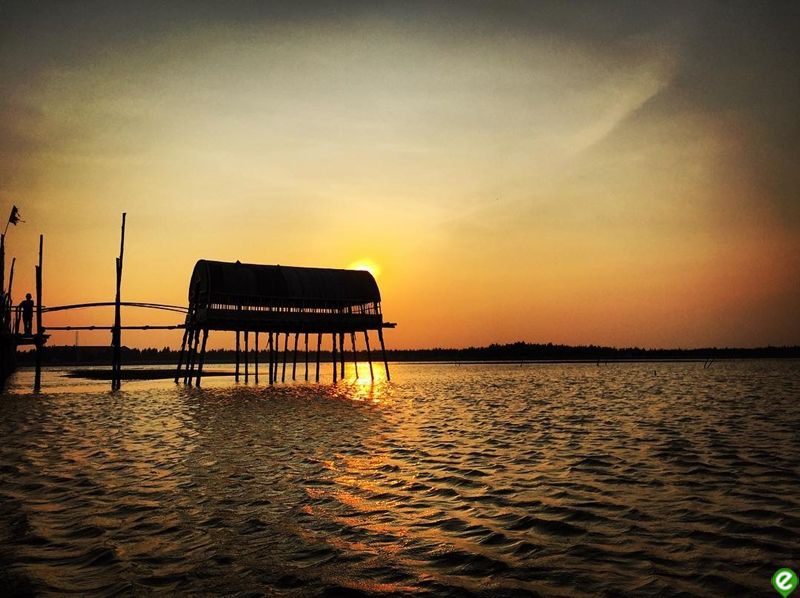 Sunset over the ocean. Photo: @happyhangvn 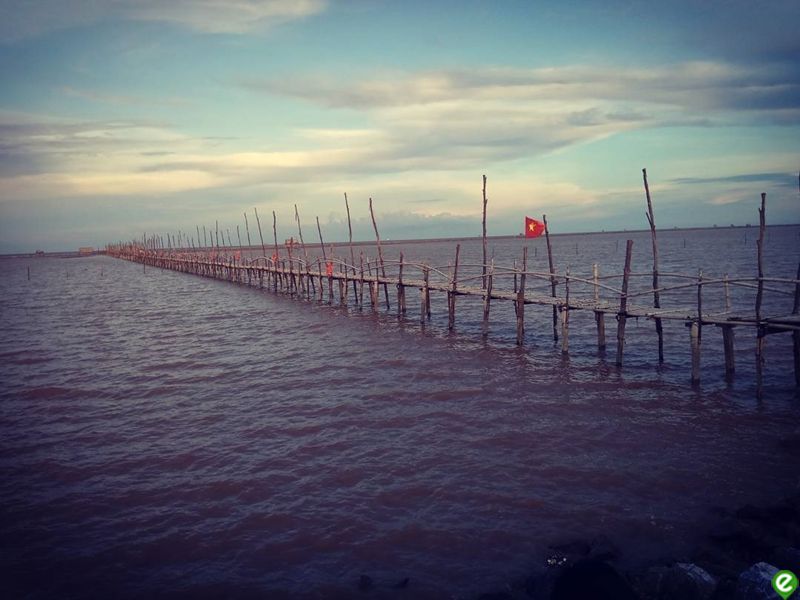 The longest bamboo bridge in the North of Vietnam. Photo: @tronggggnguyennnn

When coming to Con Den, visitors can also experience walking on the Dream Bridge across the mangrove forest, which is regarded as the longest bamboo bridge in the North of Vietnam. 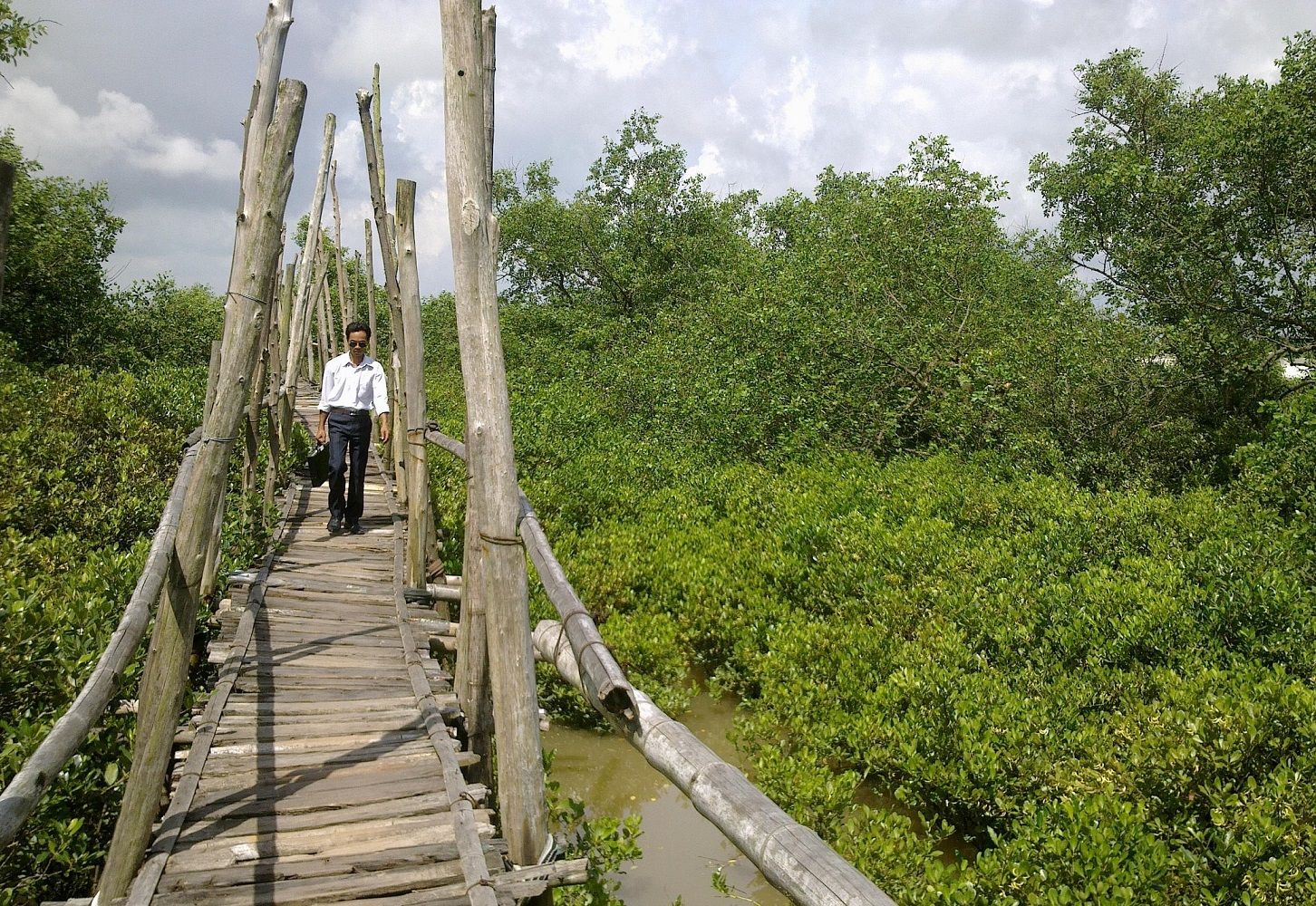 The bamboo bridge across the mangrove forest. Photo: thienduongachau

Bac Trach Church, which is located in Van Truong commune, Tien Hai district, is 23km from the east of Thai Binh city, which is one of the most beautiful and largest churches in Vietnam today. The first church was built with rammed earth and thatched roof in 1735, and was restored many times in 1770, 1880, 1895 and 1938. In 2006, Father Augustine Nguyen Quang Huy and the parish started the construction of a new church, which is also the 6th church in the history of the parish. The new church was approved for the devotion to the Sacred Heart of Jesus on April 27, 2014 by Archbishop Leopoldo Girelli. 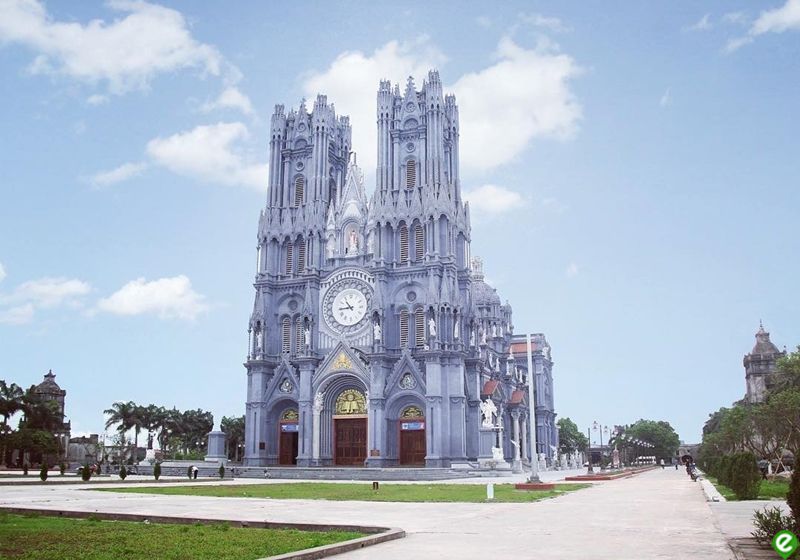 Bac Trach Church is one of the most beautiful churches in Vietnam. Photo: @lymochii

The church features Roman architecture with many unique doors, towers and arch designs. Visitors will be impressed by more than 100 sets of shutter windows, each of which is a colourful picture with meticulous patterns from fancy petals or leaves. Also, there are many prominent golden-painted pillars inside. 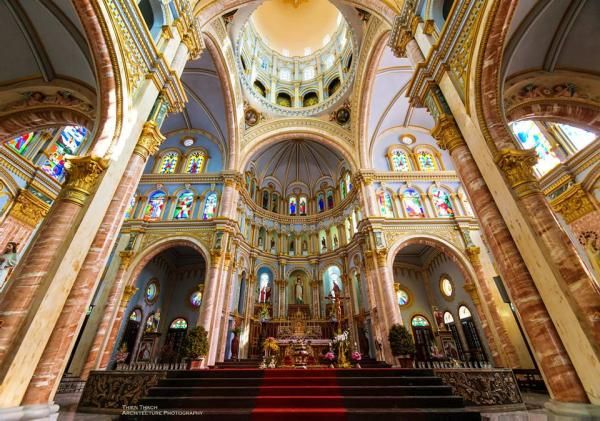 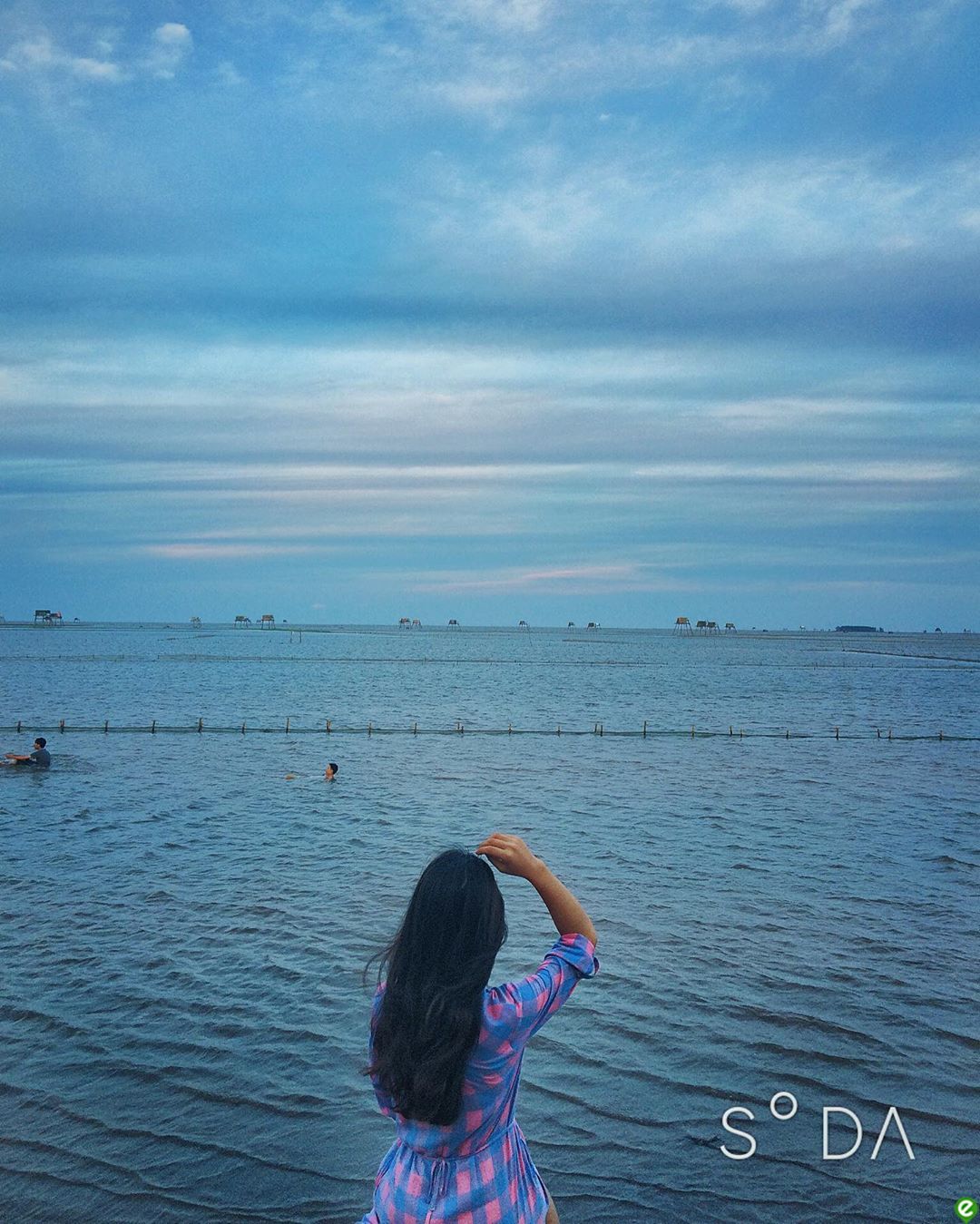 In the journey to discover Thai Binh, it is impossible not to mention Dong Chau beach, which is located in Dong Minh commune, Tien Hai district, Thai Binh province. Despite its 5km long coastline with pristine beauty and not being as outstanding as others, the beach attracts a large number of visitors while creating a fresh and cool atmosphere. With an immense sea and rows of casuarina, Dong Chau can give you a sense of peace and relaxation.

The dawn here is as beautiful as a picture. Photo: xevietanh

In addition to ocean activities, visitors should not miss the experience of watching the sunrise on the sea in the early morning when the sea surface is sparkling as a magical picture.

More than 30km from Thai Binh city, Tien La temple is located in Tien La village, Doan Hung commune. This is the place to worship General Bat Nan (the one who rescued the people here) Vu Thi Thuc (born 17, died in 43) - a female general of Hai Ba Trung who fought against To Dinh. 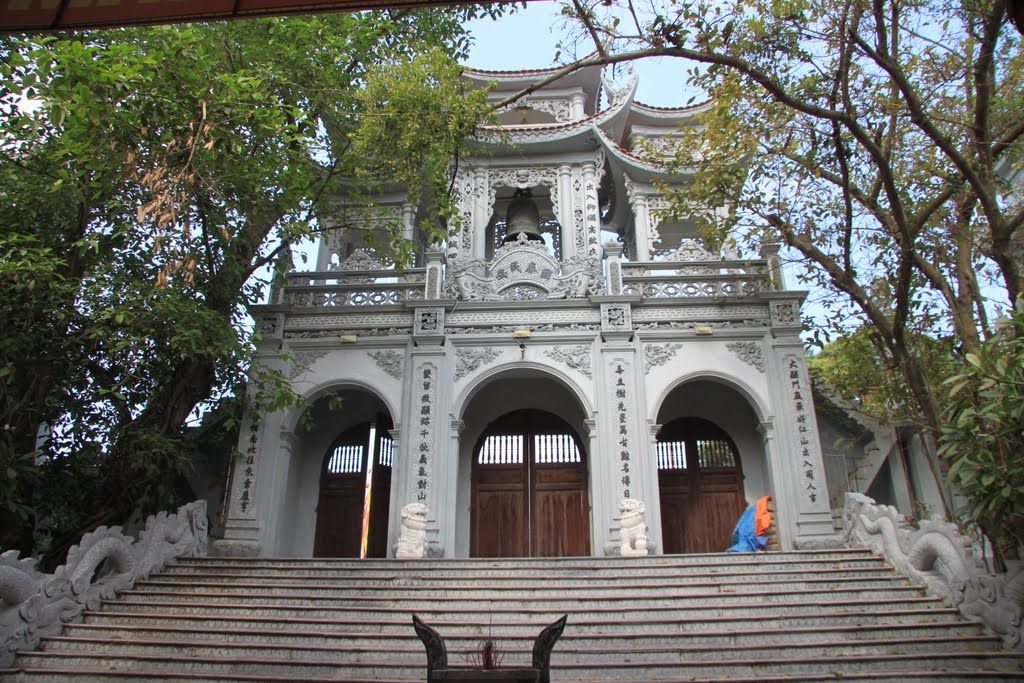 Tien La Temple has an area of about 4,000 square meters with the front facing Tien Hung river and architecture based on “Phuong Dinh” style. The system of pillars, beams and rafters in the main hall are made from stone and elaborately carved. Tien La Temple also preserves many artifacts of aesthetic value dating from the Le dynasty, documents from Le to Nguyen dynasty, stelae and bells. 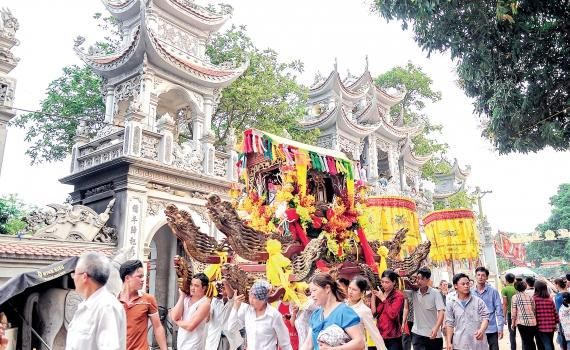 The festival of Tien La Temple is usually held on March 15 to March 17 of the lunar calendar (coinciding with the day of the General’s death on March 17, Quy Mao year) to commemorate her merits. Visitors will have the opportunity to participate in typical Vietnamese folk games such as cockfighting, wrestling, dragon dance, lion dance and procession ritual featuring Vietnamese culture.

In December, the field of mustard flowers with more than 10 hectares located on the banks of the Red River in Hoi Khe village, Hong Ly commune, Vu Thu district, Thai Binh, becomes the destination of many tourists. Located close to the dike next to the Red River, the large yellow-flower field makes visitors feel lost in the tranquil landscape of the countryside.

The field is rated as the second most beautiful mustard flower field in the South Red River Delta region, so when coming to Hong Ly, not only can visitors immerse themselves in the beautiful scenery, but also experience the hard working atmosphere in rural areas along the Red River. 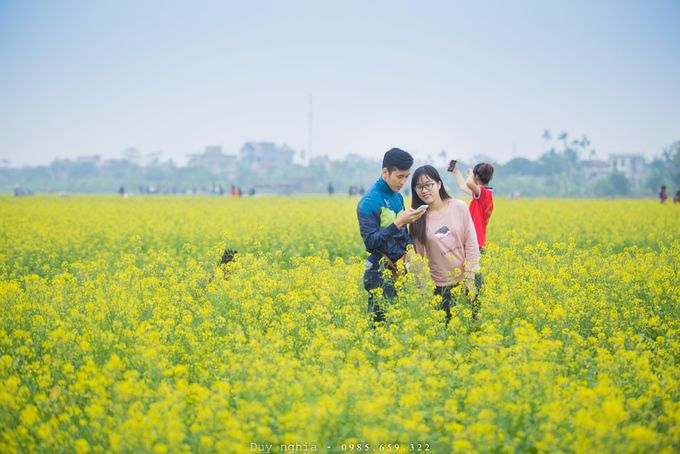 The name “Thai Binh” reminds visitors of a peaceful province without many outstanding destinations, but still has its own characteristics, fascinating them with pristine beaches or long-standing temples.