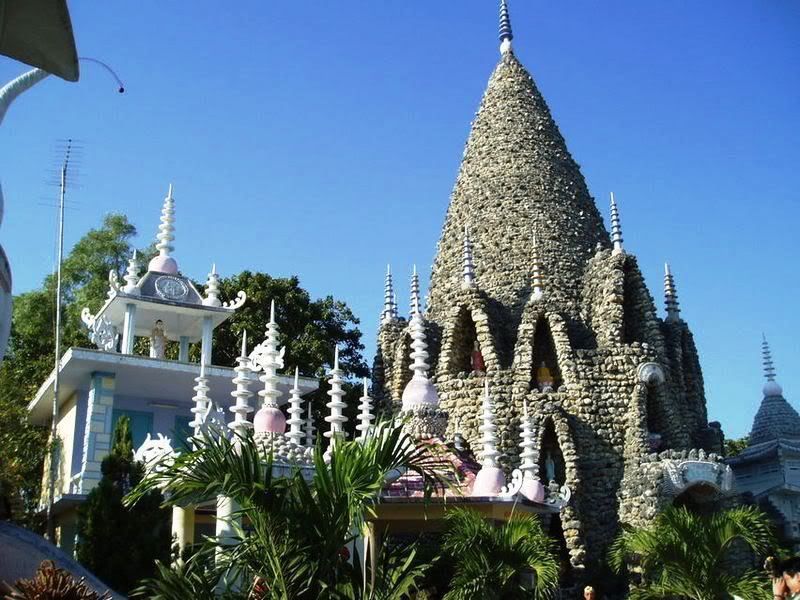 The five beautiful spots "fascinating" anyone coming to Cam Ranh

Cam Ranh is a relatively new tourist destination in Khanh Hoa province with many interesting things for visitors to explore. Coming here, you can immerse in the romantic and wild natural scenery and discover the outstanding and impressive architecture of this land.

Cam Ranh, which is in Khanh Hoa province, is located in a tropical monsoon climate and heavily influenced by the ocean, making the climate of Cam Ranh relatively temperate - not too harsh as it is in the North nor too erratic as in the South of Vietnam. 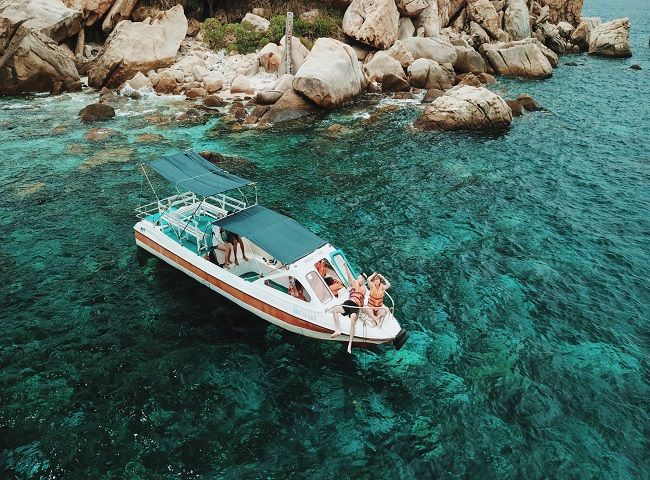 The ideal time to explore Cam Ranh is from March to August when the weather is extremely nice: the sky is purely blue with little rain and a peaceful ocean Although it rains a lot in the remaining months, it still gets sunny, allowing you to travel. 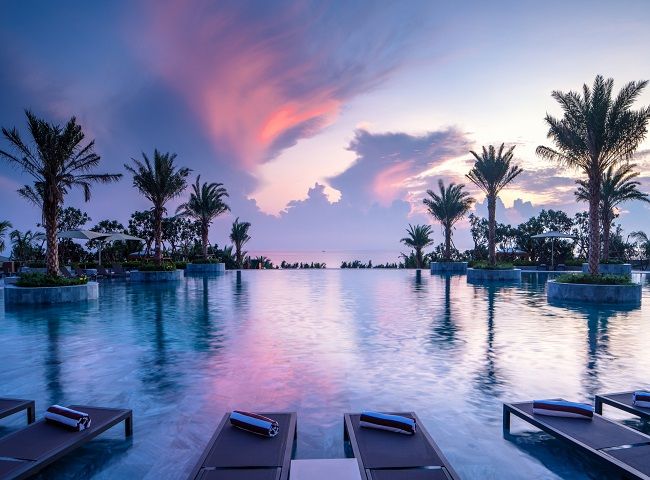 Destinations not to be missed at Cam Ranh

Tu Van Pagoda, also known as Oc Pagoda or San Ho Pagoda, is located on 3/4 Street, Cam Linh Ward, Cam Ranh City, Khanh Hoa province. The pagoda was built by the local monks in 1968 with the unique snail shells. The two most prominent points of the pagoda are Bao Tich Tower and 18 floors of Hell. 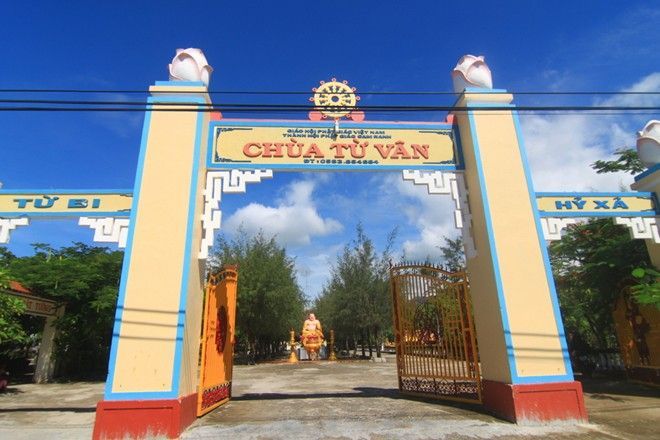 Bao Tich Tower is built from corals combined with snail shells and seashells to create a sea-style space. This is also the tallest recorded tower in Vietnam with a height of 39m with 49 small pyramids outside, each of which has a Buddha statue with thousands of eyes and arms. That's why there are hundreds of very unique large and small Buddha statues in this tower. The dome of the tower is constructed in the shape of a cone, which was carved  with colorful snail shells. The pyramid-shaped, two-storey architecture reaching out to the sky makes the tower similar to a splendid castle. The tower also has 8 doors representing the "Eightfold Path" (including: right view, right thought, right speech, right action, right life, right diligence, mindfulness, right concentration). Venerable Thich Thong Anh, the abbot of Tu Van pagoda, and the monks of the pagoda personally designed and constructed Bao Tich tower, and it took them 5 years to complete the work. 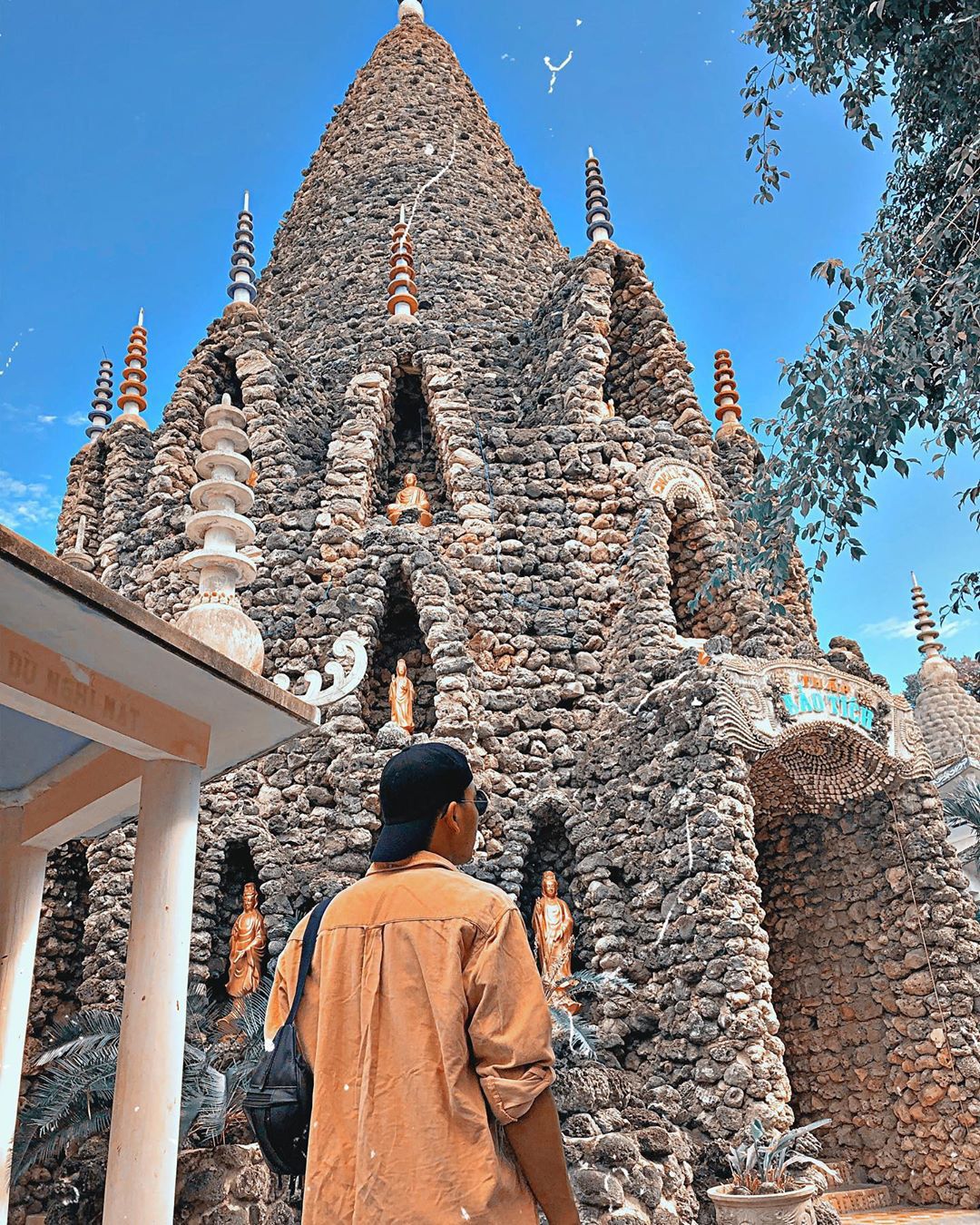 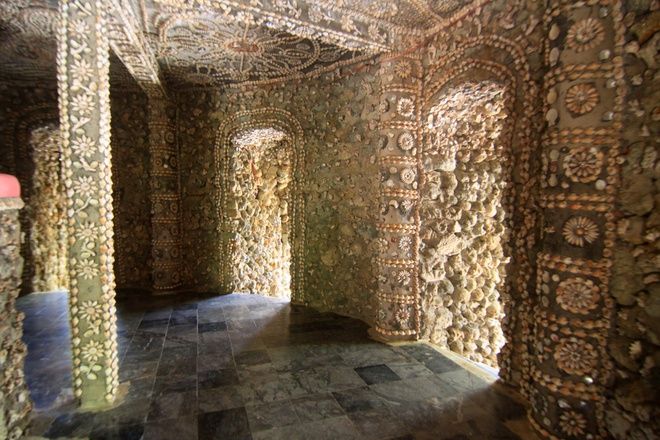 The road down to "18 floors of Hell" is only 500m long, but was sophisticatedly built from coral rocks and snail shells, while the outside is surrounded by a majestic dragon. It is quite dark as this place leads to the underground, so visitors should carry a flashlight when visiting. Along the path are 12 boards writing crimes in the world and the punishment in Hell to advise people to be a good person. The looming scenery hidden in the flickering light increased the sense of fear. Next is the Nai Ha bridge to help people put an end to all sufferings (according to the Buddha legend), and then you can return to the world by the door of a large dragon mouth. This attraction helps visitors forget all the sadness of life and find the beauty of current life. 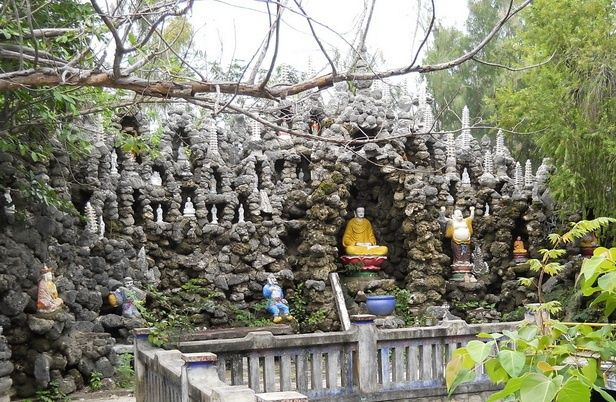 Many other works in the pagoda are also made of shells and corals. Photo: Zingnews

Thanks to its special architecture, Tu Van Pagoda has been praised by the tourism site Culture Trip as "a treasure for adventurous travelers".

Dai Beach, which is 20km from Nha Trang city center and 12km from Cam Ranh airport, is a pristine beach with a purely natural space. Right from the moment you arrive here, you will be impressed by the tranquil beauty with an open space, which is very suitable for swimming and relaxation. It is hard to find a beach with a 10km long coastline with white sand and clear blue sea. This place also provides many interesting recreational activities under the sea such as diving to see the coral reef, windsurfing on the sea and diving to the sea floor.

The ideal time to visit Bai Dai is from March to August because the sea is serene with small waves and less rain, which is very suitable for swimming and traveling. 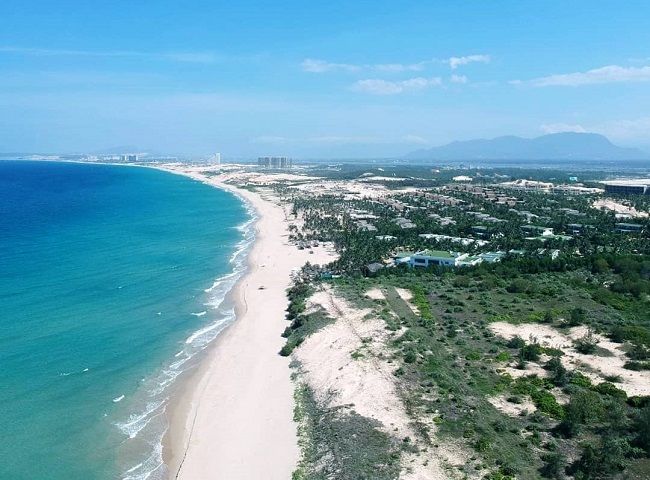 Dai Beach has a length of up to 10km. Photo: avtravel.com.vn

Nom Beach is located on Binh Ba Island, Cam Binh Commune, Cam Ranh City, Khanh Hoa province, which is a beach in the south of the island surrounded by 2 mountains in the shape of an arc. With serene waves and fine sand, this is an ideal place for swimming. Nom Beach is considered the most beautiful beach in the island to help visitors enjoy the purely clear sea water with an open natural space. There are many recreational activities such as riding on a banana stem and motorbike riding. At the same time, there are many seafood restaurants for visitors to choose to enjoy the specialties of this sea area. 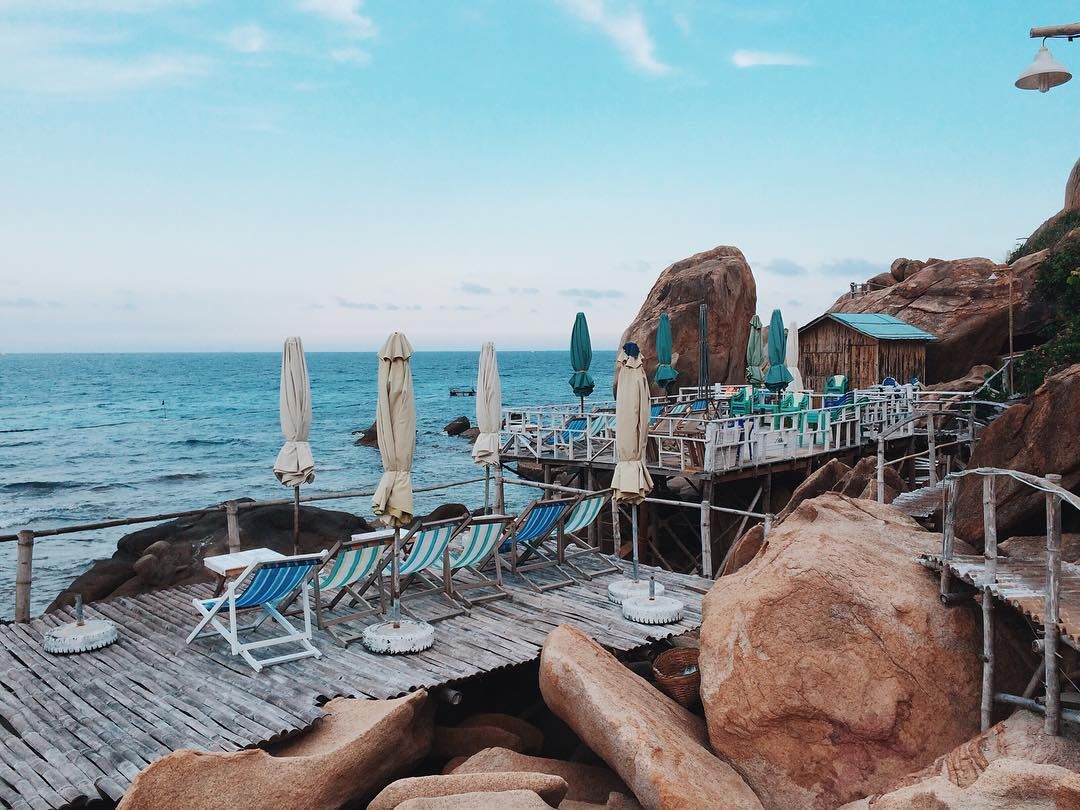 Chuong is also a beach on Binh Ba island, Cam Ranh city, Khanh Hoa province. This place has not been exploited for tourism, and therefore still retains the attractive wild features of nature. In addition to the clear blue sea, there is a particularly special thing which is hard to find in any other beach. There are clusters of sea spinach growing on the white sandy beach, mixed with seashells and coral reefs with all kinds of unique shapes in the distance. If you come here in the early morning, you can admire the beautiful sunrise on the sea with the first sunlight covering the blue sea.

Hon Ba Nature Reserve is located in 4 districts: Khanh Vinh, Khanh Son, Cam Lam, Dien Khanh - 60km from Nha Trang city. This destination is located at an altitude of 1,578m above sea level with many consecutive mountains. Hon Ba has a cool climate all year round with a temperature of only about 20 Celsius degrees, so it is often regarded as the second Dalat in the middle of the Central of Vietnam. Due to frequent rain throughout the year, the level of humidity is often high. 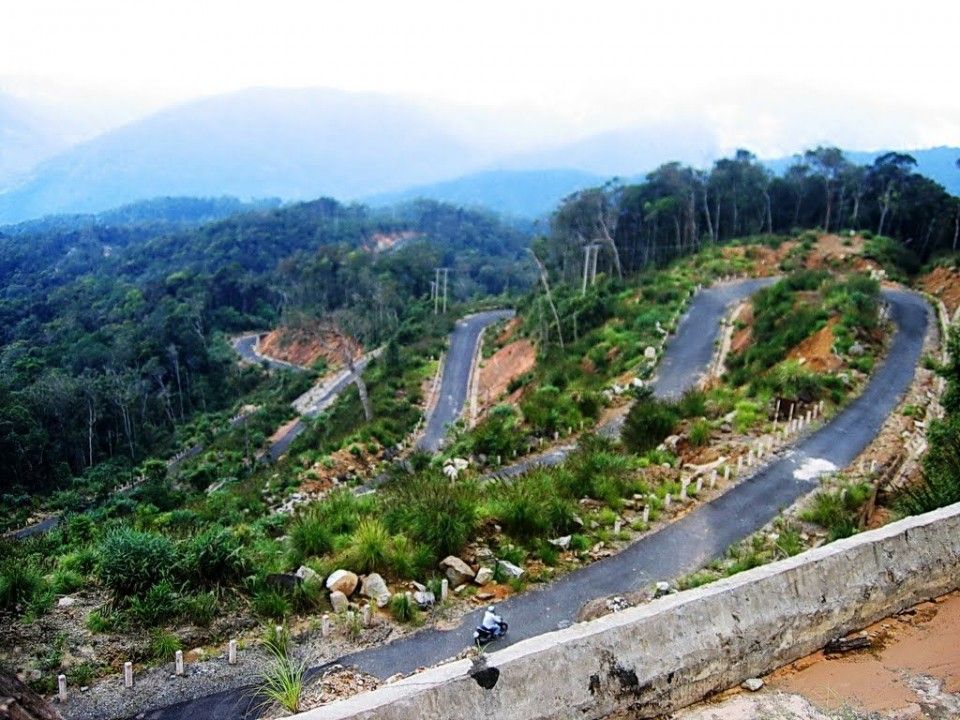 Doctor Alexandre Yersin - a French explorer of Swiss origin - discovered Hon Ba on September 22, 1863. From 1915, he built a research camp on the top of Hon Ba, cultivated and experimented with medicinal plants. Dr. Yersin also contributed to the discovery of many rare species of plants here such as Truong Hung or Hon Ba tea. After that, Hon Ba nature reserve was established in 2005 to preserve the diversity of the tropical forest ecology system, watershed protection, serving scientific research on forests, etc. Currently, there are about 592 species of higher plants, belonging to 401 genera and 120 families; of which:  73 species of pine and fern,  8 species of gymnosperm, 511 species of angiosperm and some families are only distributed in sub-tropical or temperate climates such as: Ericaceae, Aceraceae, Lauraceae, Cyatheaceae, etc. 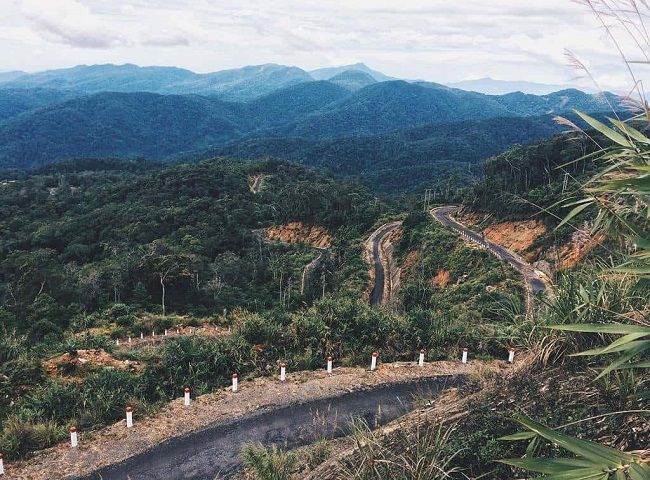 Visiting Hon Ba, you can enjoy the typical fresh and cool atmosphere of the ecosystem in Cam Ranh. Walking under the green primeval forests along a trail, you will reach the highest point of Hon Ba. Looking down from above, the reserve looks like a beautiful ink wash painting appearing in front of visitors, making them feel like being immersed in the vast natural space here.

Cam Ranh is situated in a very convenient location, so the transportation here is extremely diverse. Means of transport which can be listed are:

The plane will land at Cam Ranh airport. From here, you can easily move to the resorts in Cam Ranh. You can buy return tickets from some airlines to this land such as Vietnam Airlines, Jetstar and Vietjet Air. 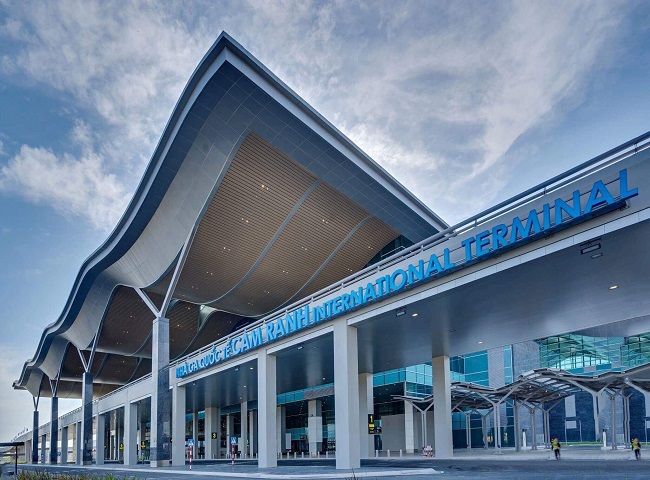 There are some international airlines which also have flights to Cam Ranh such as China Southern, Cathay Pacific, Malaysia Airlines, Korean Air, etc. It is noted that the airfare depends on the time and distance.

Currently, there will be 2 trains to and from Nga Ba station (Cam Ranh) every day from Saigon station with the ticket price of about VND 200,000 - 500,000/ticket depending on the type of seat.

The coach is only suitable for traveling from the southern provinces to Cam Ranh. Currently, there are a lot of high-quality coaches with high-class beds and seats on the route Saigon - Cam Ranh - Nha Trang with quite a reasonable ticket price ranging from VND 170,000 - 200,000/person.

Traveling to Cam Ranh, not only can visitors immerse themselves in nature with beautiful beaches, learn the diverse ecosystems in the primitive forest, but they can also have the opportunity to visit one of the most unique architectural features of this area - Tu Van pagoda - which is made from a snail shells. You are sure to have many unforgettable memories of the beautiful land of Khanh Hoa.