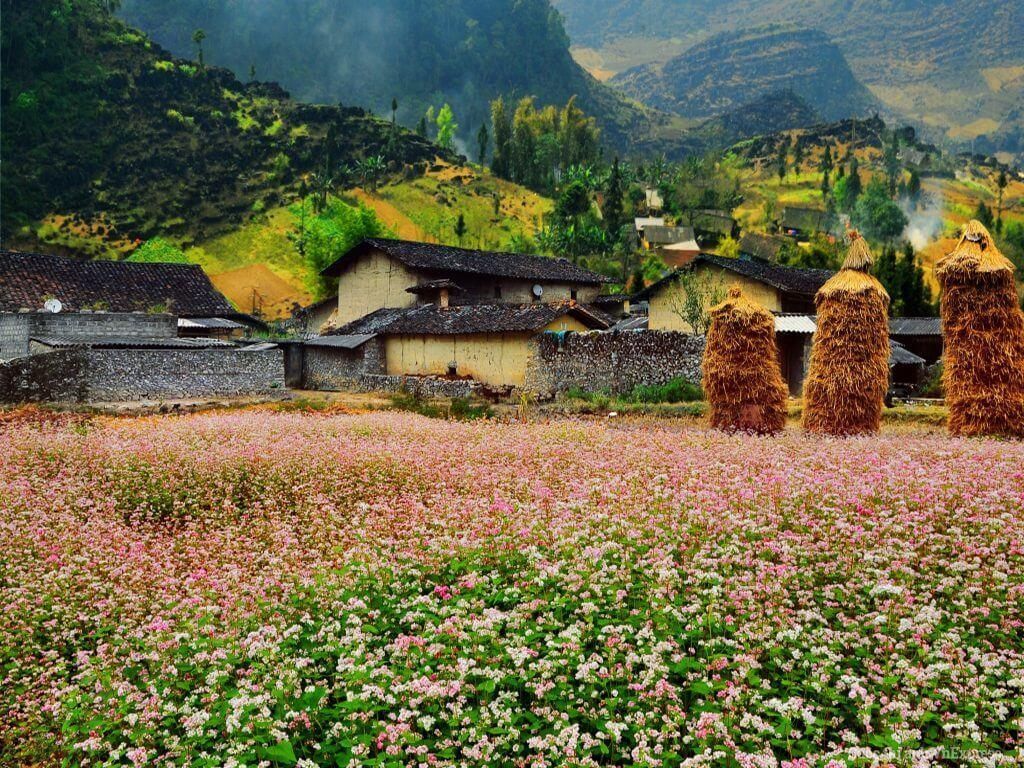 Some people come to Ha Giang as they are fascinated by the beauty of buckwheat flowers; some visit this province to experience the magnificent and challenging roads; while some travel here to explore the northernmost land of the country and immerse themselves in its majestic and poetic beauty. If you are a travel addict, coming to Ha Giang is a must when in Vietnam.

The best season to travel to Ha Giang

In each season, Ha Giang has a different beauty. From January to April, the majestic mountains here are covered by the red colour of peach blossoms, red silk cotton flowers and plum flowers. This is also the traditional festival season with the famous Khau Vai “love market'' taking place in April. 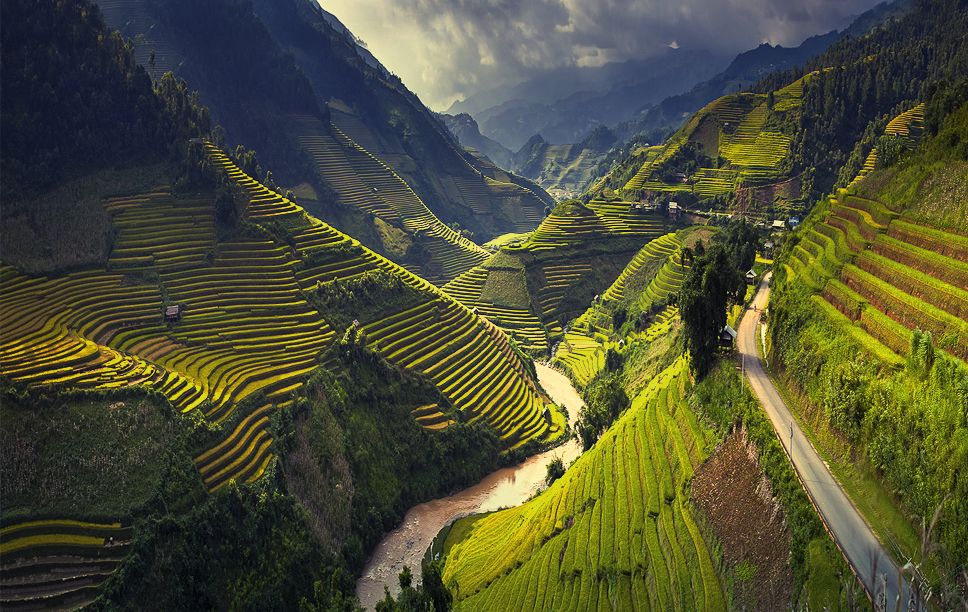 Ha Giang has its distinct beauty each season. Photo: ivivu.com

On summer days from May to July, on the roads of Ha Giang, you will be able to see the “water season'' flowing on terraced rice fields.

Around August and September when the harvest season comes, those terraced rice fields put on a bright yellow "shirt" that will make you excited.

The last months of the year in Ha Giang is one of the best times for you to immerse yourself in the beautiful scenery of buckwheat and rapeseed flower fields. Driving from Quan Ba to Lung Cu, you will also have the opportunity to admire the mountains and forests of Ha Giang submerged in a white mist 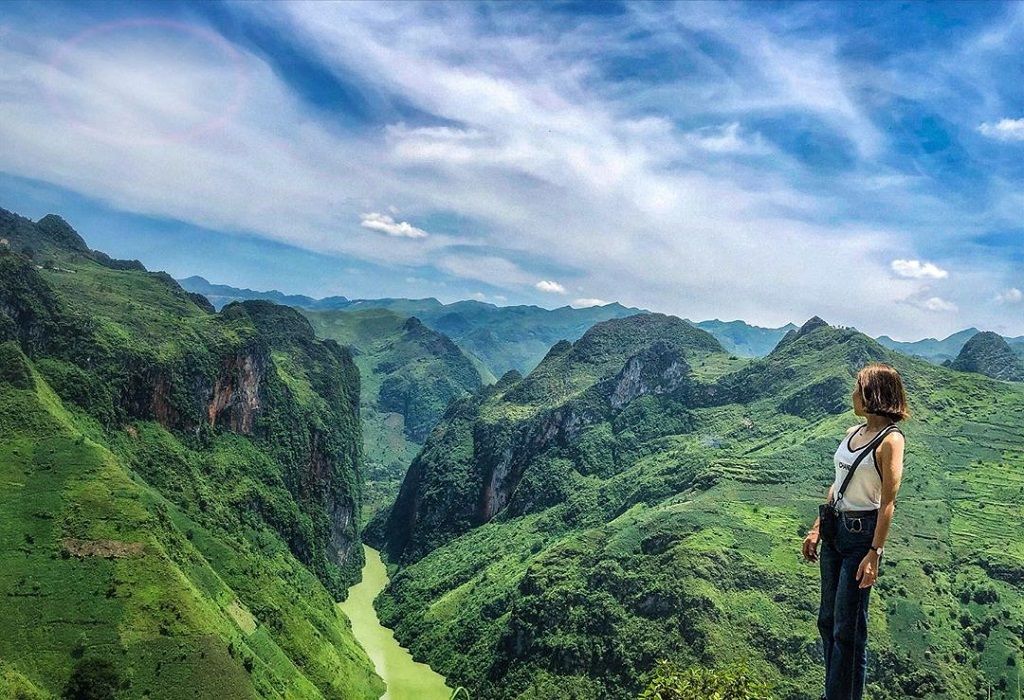 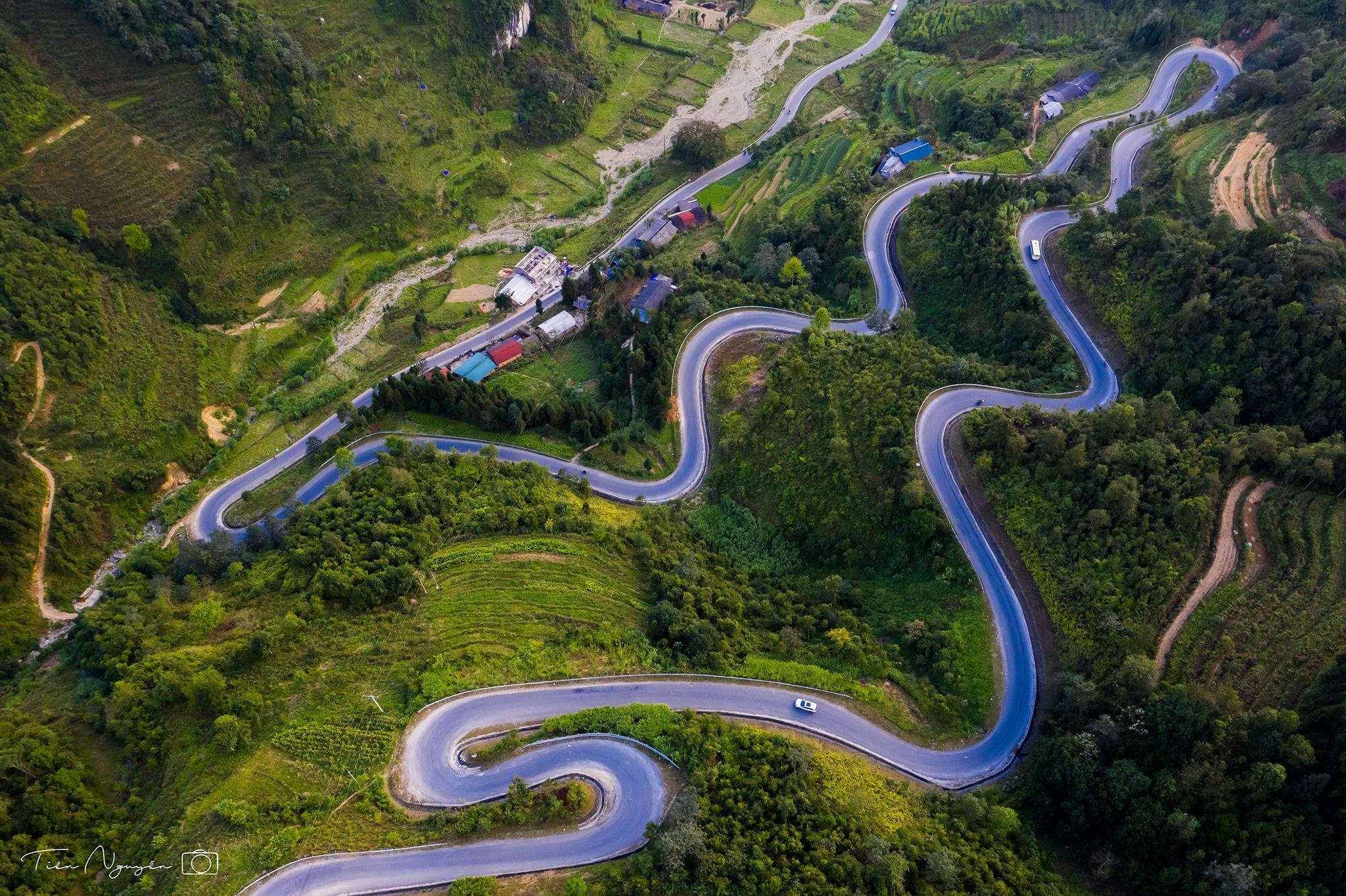 Ma Pi Leng is one of the four great passes of the Northwest region. Photo: luxstay.com

The pass was constructed on September 10, 1959 and then completed on June 15, 1965 with the participation of 1,300 youngsters and more than 1,000 citizens from 16 ethnic groups of Meo, Tay, Dao, Pu Peo, Lot, etc. of 8 provinces of Cao Bac Lang region (Cao Bang, Bac Kan, Lang Son). They had to work around the clock to destroy mountain rocks to make roads. It is important to note that the workers had to hang on the cliffs to make the 2km road through the peak of Ma Pi Leng in 11 months. Initially, the pass was only wide enough for pedestrians and horse-drawn vehicles. Later, the road was widened and upgraded for cars, but it is still the most dangerous pass in the Northwest due to bends and rough rocks. 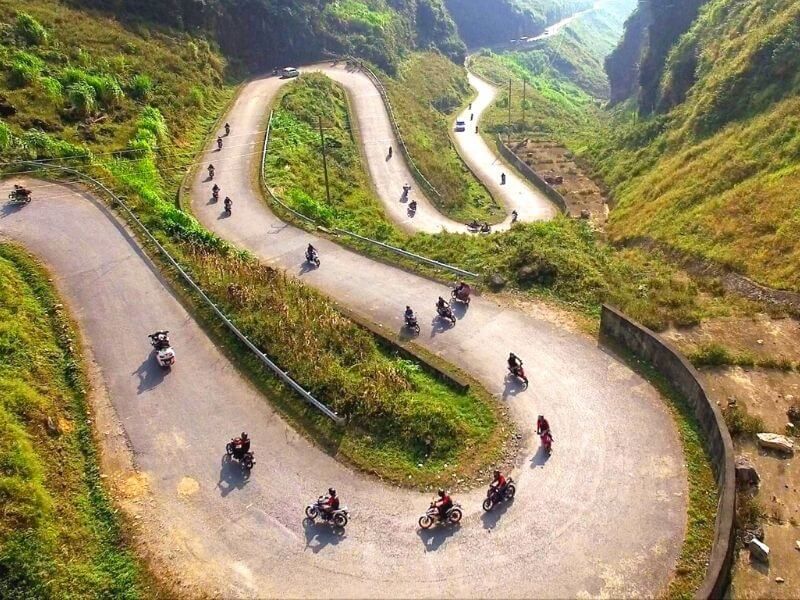 The road of Ma Pi Leng is 20km long with 9 dangerous bends and steep slopes, which both poses a big challenge and creates an attraction for backpackers. Ma Pi Leng peak is about 1,200m high, belonging to Dong Van rock plateau. The road leading to the top of the mountain is a part of the "Happiness Road" connecting Ha Giang city, Dong Van town and Meo Vac town. 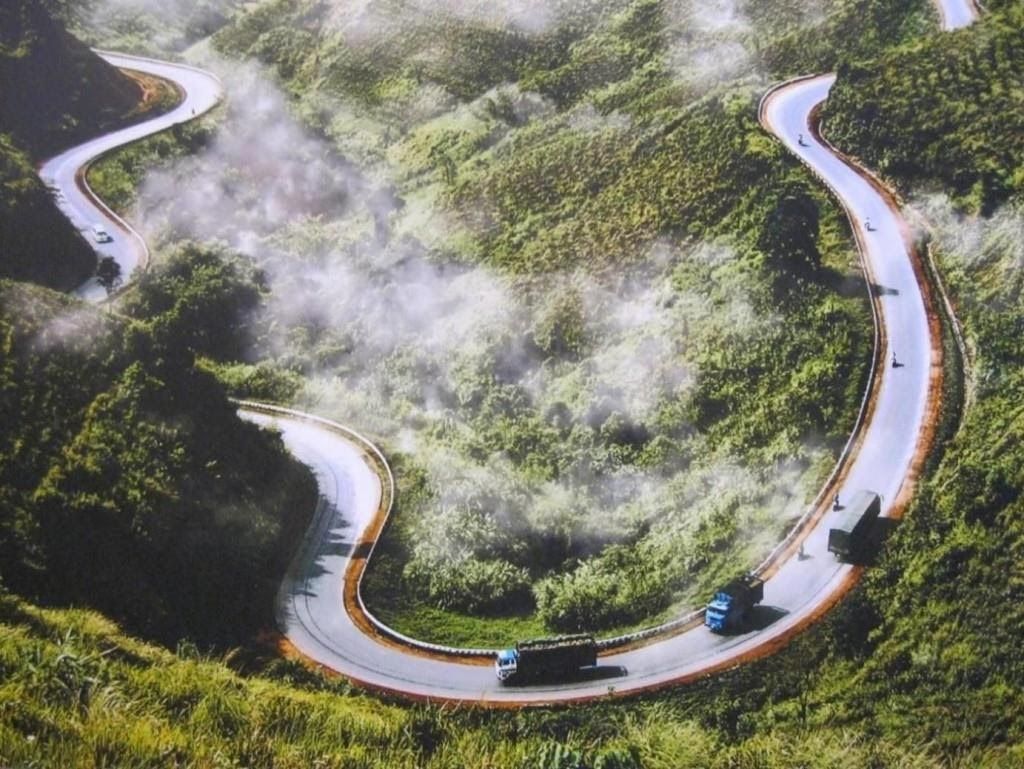 The scenery of Ma Pi Leng pass from above looks like a picture. Photo: hvntravel.com

Along the way, the scenes of roads embracing the majestic rugged mountains, old houses of the ethnic minorities, cornfields, rice fields, etc. captivate everyone. When you reach the top of the pass, you will also have the opportunity to admire the poetic beauty of Nho Que river with impressive jade green water, winding roads or countless mountain peaks as nature’s masterpieces.

Sung La Valley is located on National Highway 4C (connecting towns of Ha Giang), which is more than 20km from Dong Van district. If you travel from Yen Minh to Dong Van town, at Pho Bang junction, you can stop by Sung La Valley - the lovely "rose" of the rock plateau, which is also the main residence of the H'Mong people. 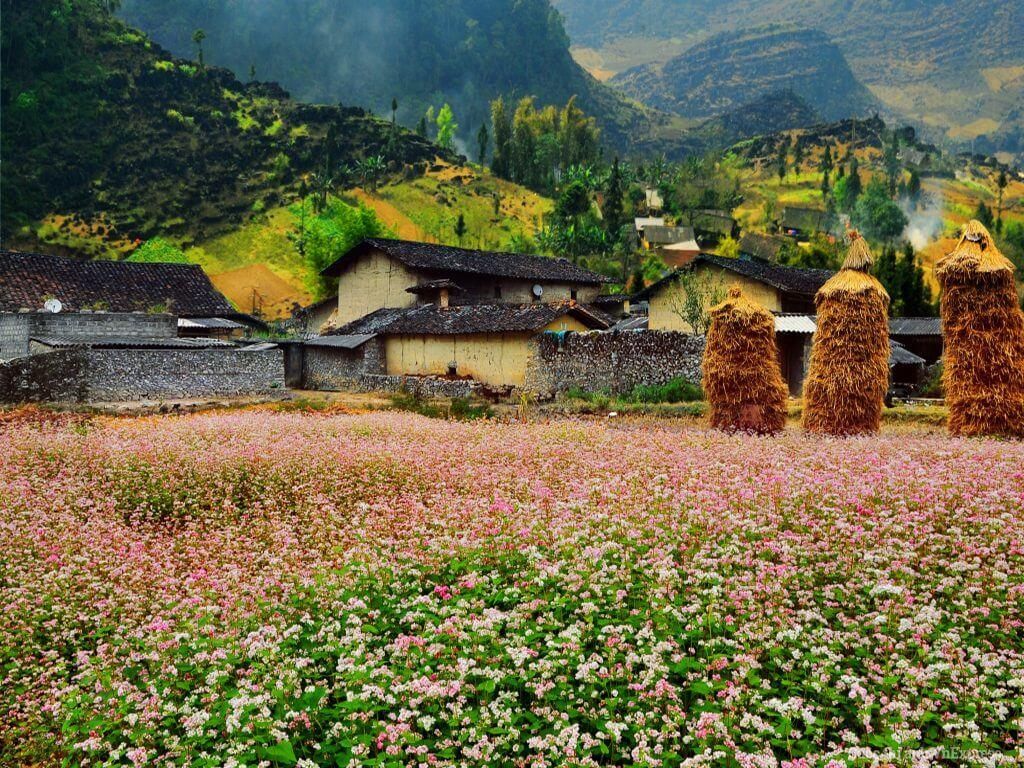 Sung La Valley is regarded as the lovely "rose" of the rock plateau. Photo: vietravel.com

From October to November, Sung La valley is as beautiful as a picture with buckwheat flower fields, cornfields, and old houses nestled in the rock plateau. That picture is made of the green of corn and rice, the lilac of eggplant and buckwheat flowers, the yellow of the sunlight, and the dark green of the China fir forest. That is why in flower seasons, Sung La valley attracts a huge number of tourists. 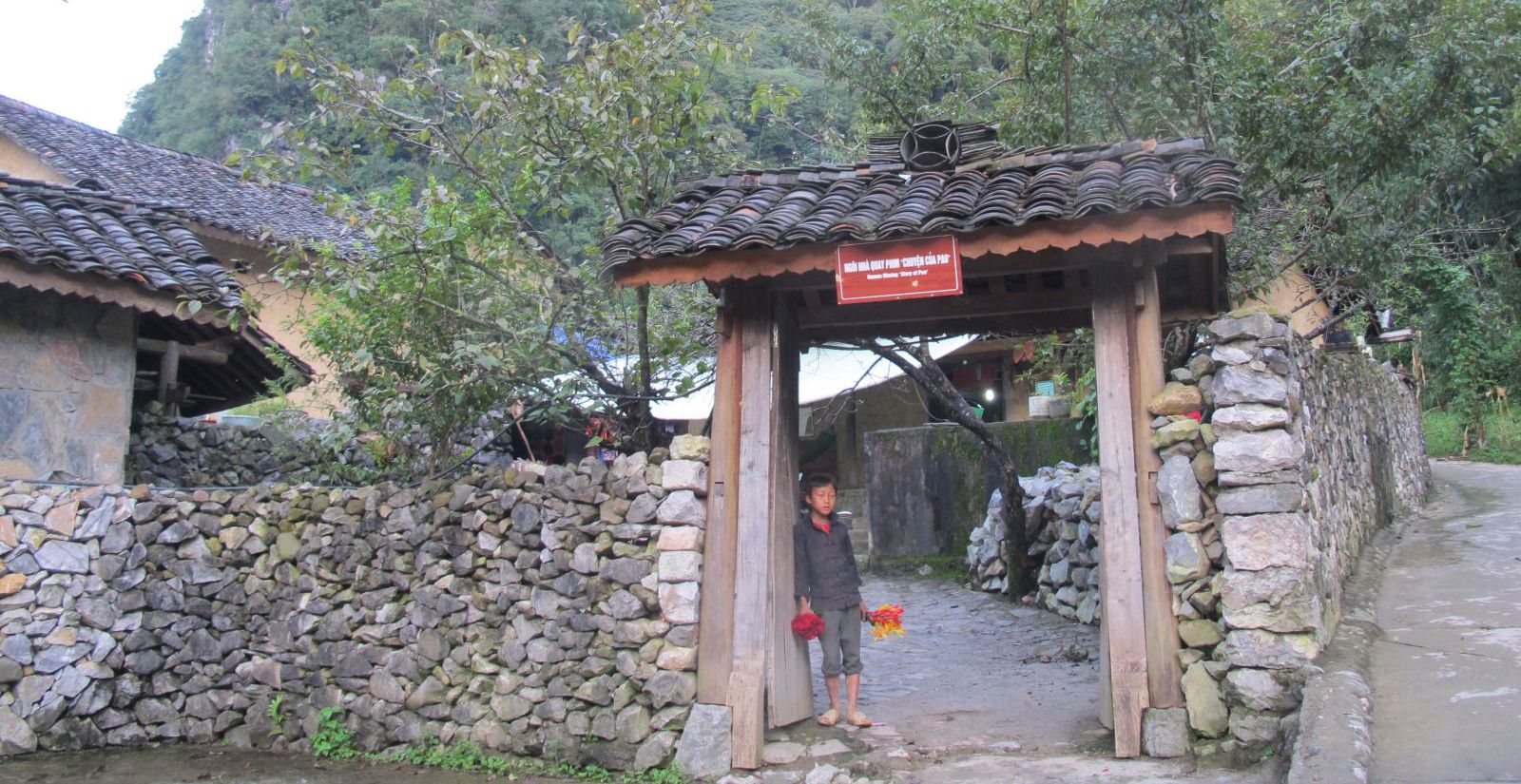 Lung Cam cultural - tourism village located in Sung La commune is an outstanding destination that is highly recommended for you. The village only has about 61 households living in ancient walled houses (houses made of rammed earth - cool in summer and warm in winter) that were handcrafted nearly 100 years ago. This place has 3 ethnic groups living together, namely H'Mong, Lo Lo and Han, in which the H'Mong takes up 85% of the population. The village has many traditional artists performing their folk songs or ethnic musical instruments. These songs have been passed down through generations with humanistic and spiritual meanings in the lives of the people there. 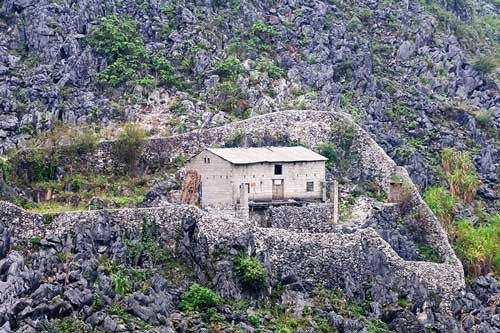 Exploring the Dong Van rock plateau is one of the interesting things when you come to Ha Giang. The plateau is located at an altitude of over 1,000m above sea level in the territory of 4 districts, namely Dong Van, Yen Minh, Quan Ba and Meo Vac.

Dong Van rock plateau is often regarded as a wild, lyrical and enchanting "gray paradise". Visitors will be able to admire a rock plateau hidden in the mist or sparkling in the sunlight. The rugged mountains form a fence embracing the rice fields, cornfields or vegetable fields. If you have the opportunity to come to Dong Van rock plateau in spring, you will definitely feel lost in a wonderful world of yellow rapeseed flowers. The “natural picture'' in Dong Van rock plateau is also adorned with rammed-earth houses. Notably, there is an extra layer of stone fence, which is completely hand-made from pristine stones, surrounding those houses. 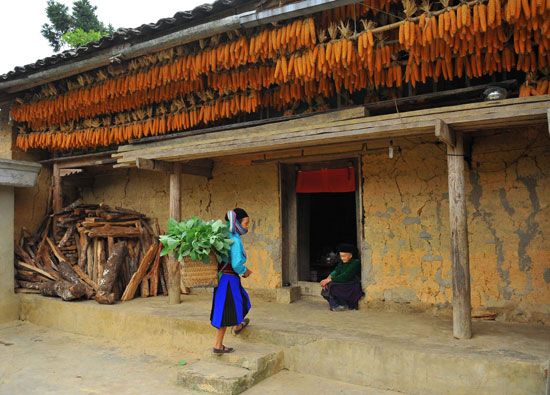 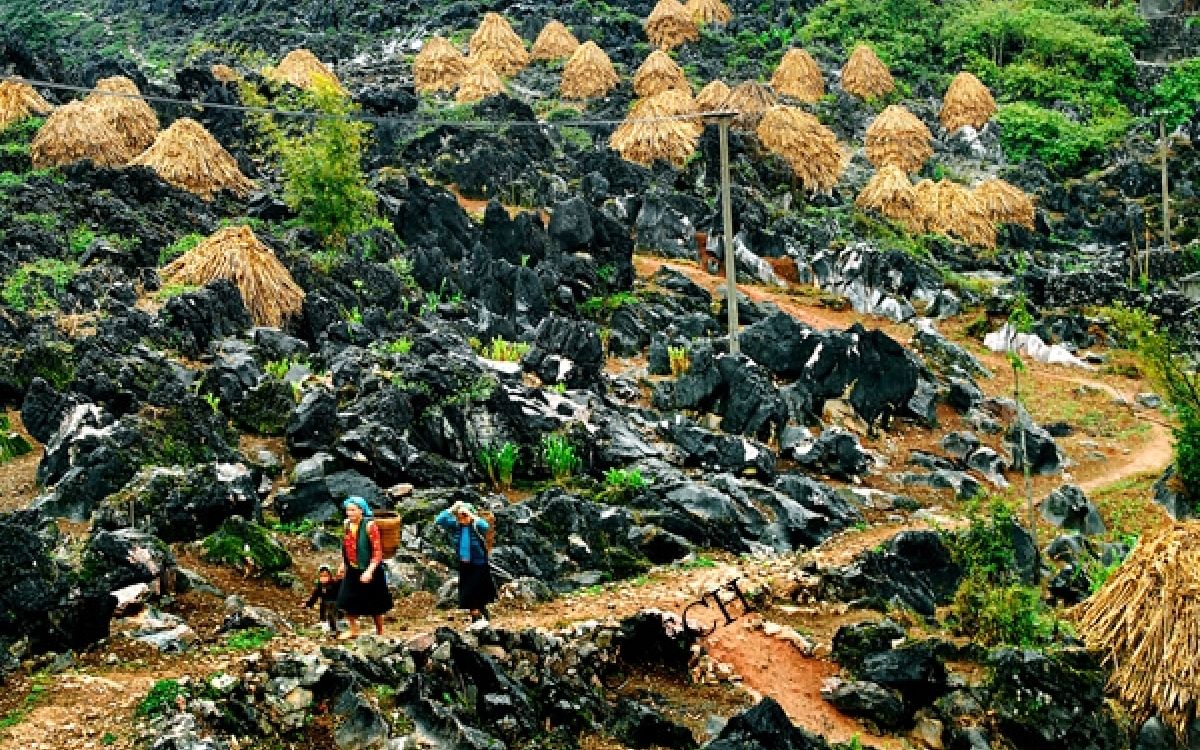 This place is currently home to about 250,000 people belonging to 17 different ethnic minorities of Vietnam. Photo: vhstravel.vn

This place is currently home to about 250,000 people belonging to 17 different ethnic groups of Vietnam. In addition to the H'Mong, Dao, Tay, and Nung people, there are ethnic groups such as La Chi, Pu Peo, Pa Then and Lo Lo. Therefore, coming to the rock plateau, you will be able to admire a lot of colourful traditional costumes of the ethnic groups, creating a joyful “picture” of daily life.

Dong Van ancient town is located in Dong Van town, Dong Van district, which is 160km from Ha Giang city. In the past, this area belonged to Dongguan canton, Nguyen Binh, Tuong Van, Tuyen Quang province with a history of hundreds of years of development. In the 1880s, the French occupied the ancient town and made significant reforms, especially Dong Van market. 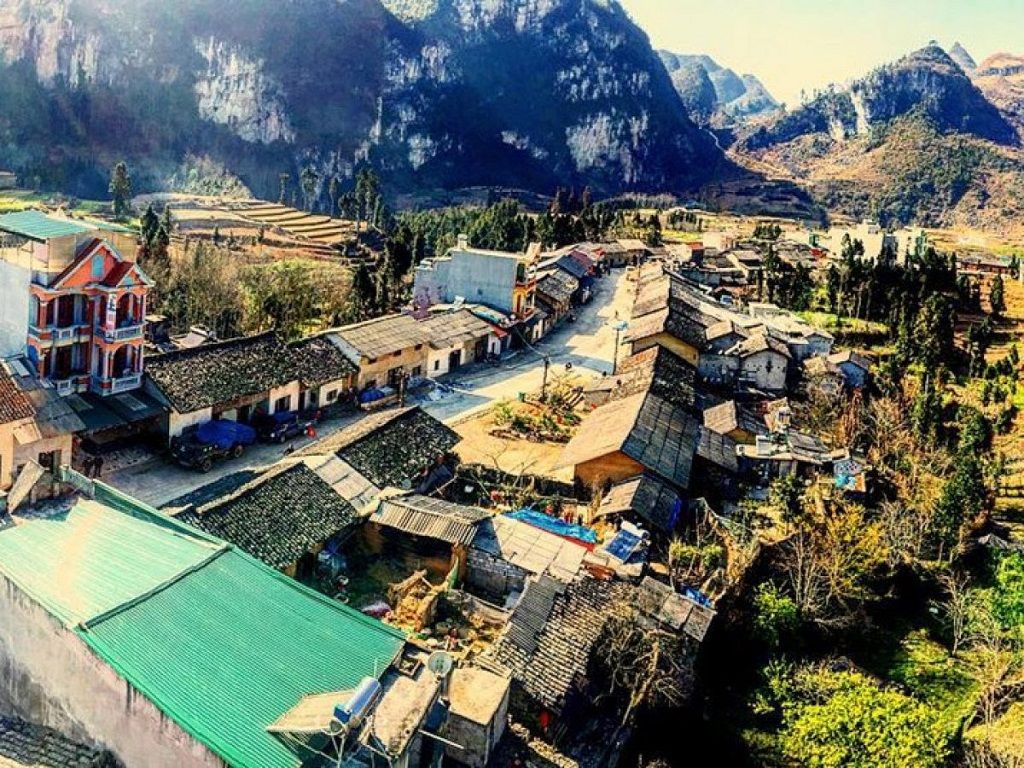 The special thing about Dong Van ancient town is that it is located in the middle of the valley with four sides of mountains. Photo: wecheckin.vn

The special thing about Dong Van ancient town is that it is located in the middle of the valley with four sides of mountains. This place has about 40 houses lined up under a cliff, creating a unique scenery. 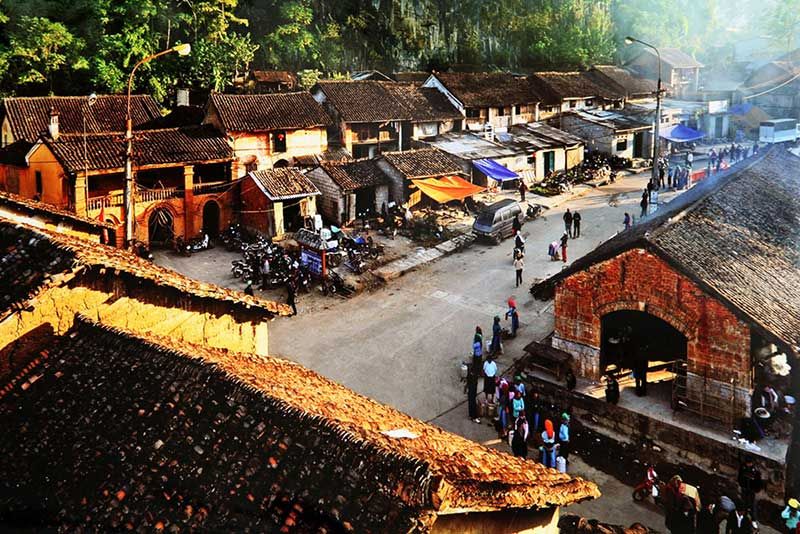 The peaceful scenery at the old town. Photo: gody.com

At first, there were only a few Tay, Mong and Hoa families living here, but gradually many other residents came to settle down. The old town features Chinese architecture with two-storey houses with yin-yang tiles and red lanterns. The old town “picture” is a harmonious blend of two tones: the bright yellow of the sunlight and the gray of the old houses. At night, the dim light from oil lamps covers the whole town, creating a quiet scene amidst majestic and pristine nature. 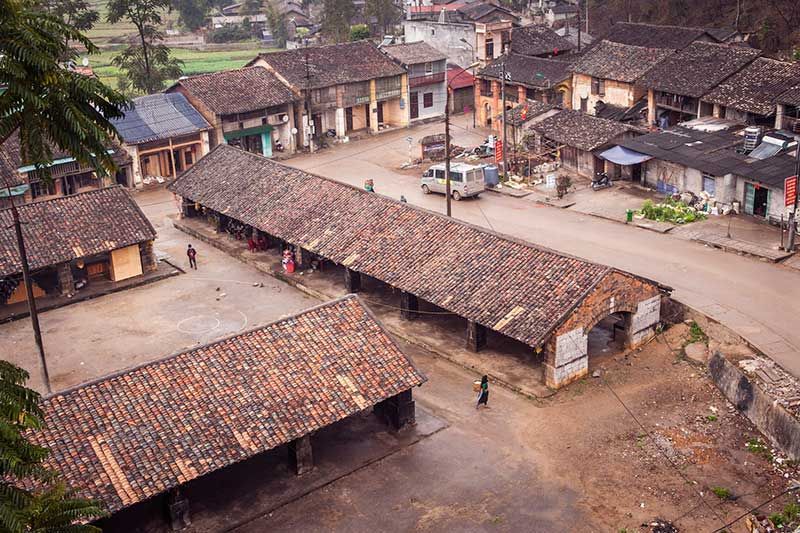 From above, the Dong Van ancient market is U-shaped. Photo: todata

When coming here, you should not miss Dong Van ancient market. The market is old and mossy with the architecture of three areas arranged in a U-shape and roofed with yin-yang tiles. This is not only a market to exchange goods of ethnic groups, but it is also a place to make friends between boys and girls. You can easily see Hmong, Pu Peo and Lo Lo girls in traditional costumes going to the market. Unique souvenirs, delicious Ha Giang specialties and beautiful brocades handmade by local people are frequently sold at Dong Van ancient market. 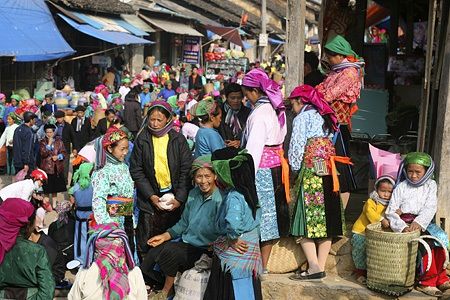 The Mansion of Vuong Family

The famous Mansion of Vuong Family is a unique and “strange” architectural place of Ha Giang province. This used to be the residence of King Meo Vuong Chinh Duc - the only king worshiped by the Mong people here - who governed 4 districts of Quan Ba, Yen Minh, Meo Vac, and Dong Van in Sa Phin. 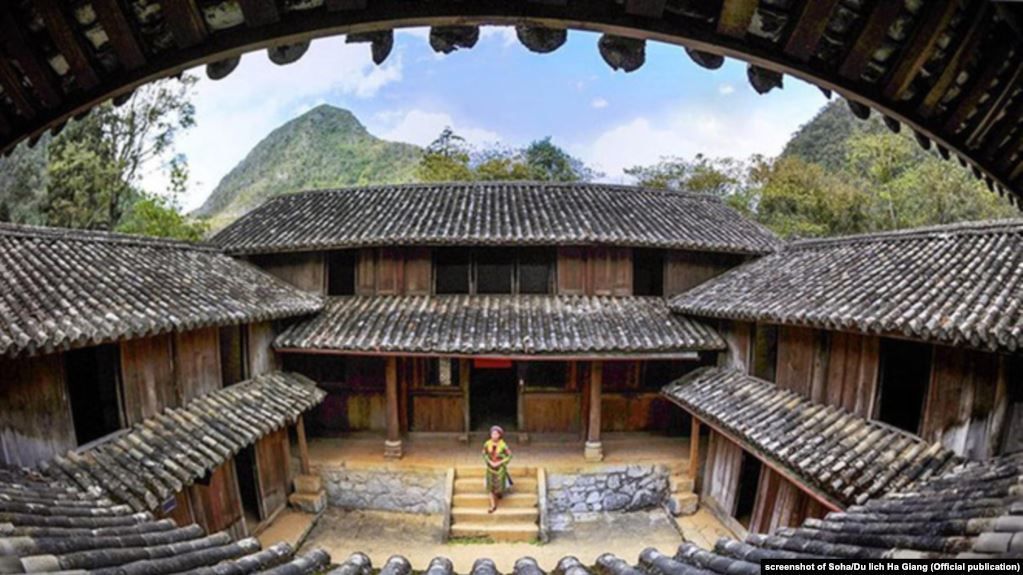 The total area of the mansion is about 3,000 square meters. Photo: Vietnamnet

The mansion was constructed in 1898 and completed in 1907. The construction cost 150,000 Indochina white silver coins, equivalent to VND 150 billion today. The total area of the mansion is about 3,000 square meters. 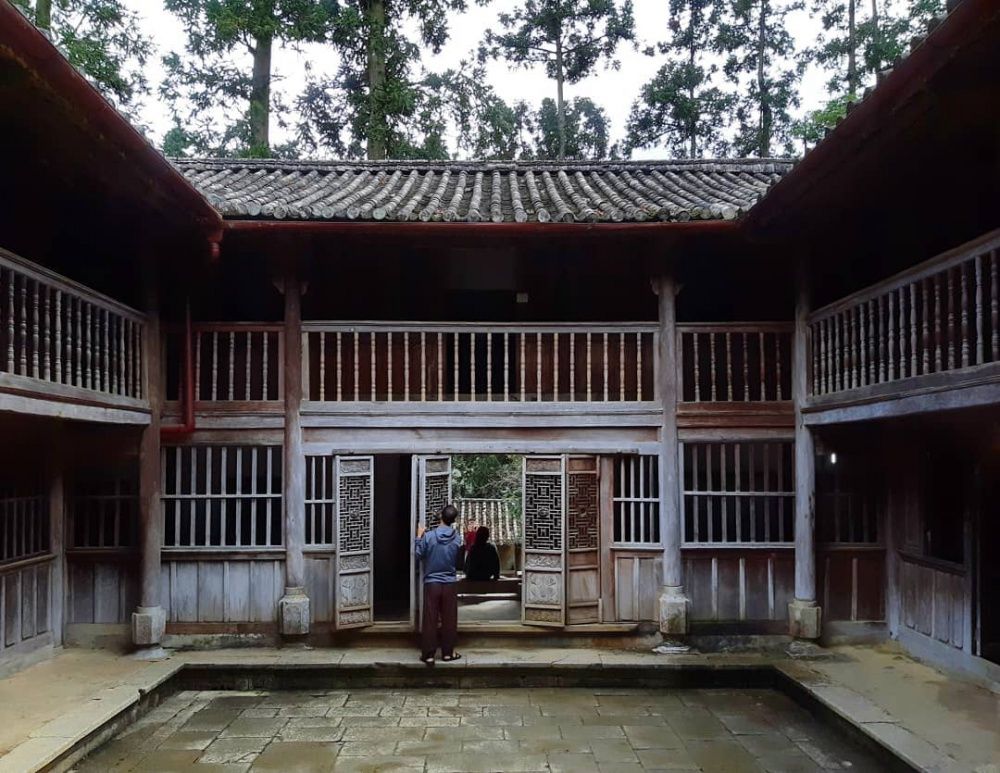 The mansion has a harmonious combination of materials such as natural stone, Chinese fir wood and terracotta tiles roofed in the yin and yang style. Photo: sanvemaybay

The mansion partially imitates the architecture of the Qing Dynasty of China, combined with Hmong patterns and French art, with a harmonious combination of materials such as natural stone, Chinese fir wood and terracotta tiles roofed in the yin and yang style. The mansion has three buildings (namely Tien, Trung and Hau) with 64 rooms for 100 people. The pillars, trusses and floors of these three buildings are all made of precious wood. 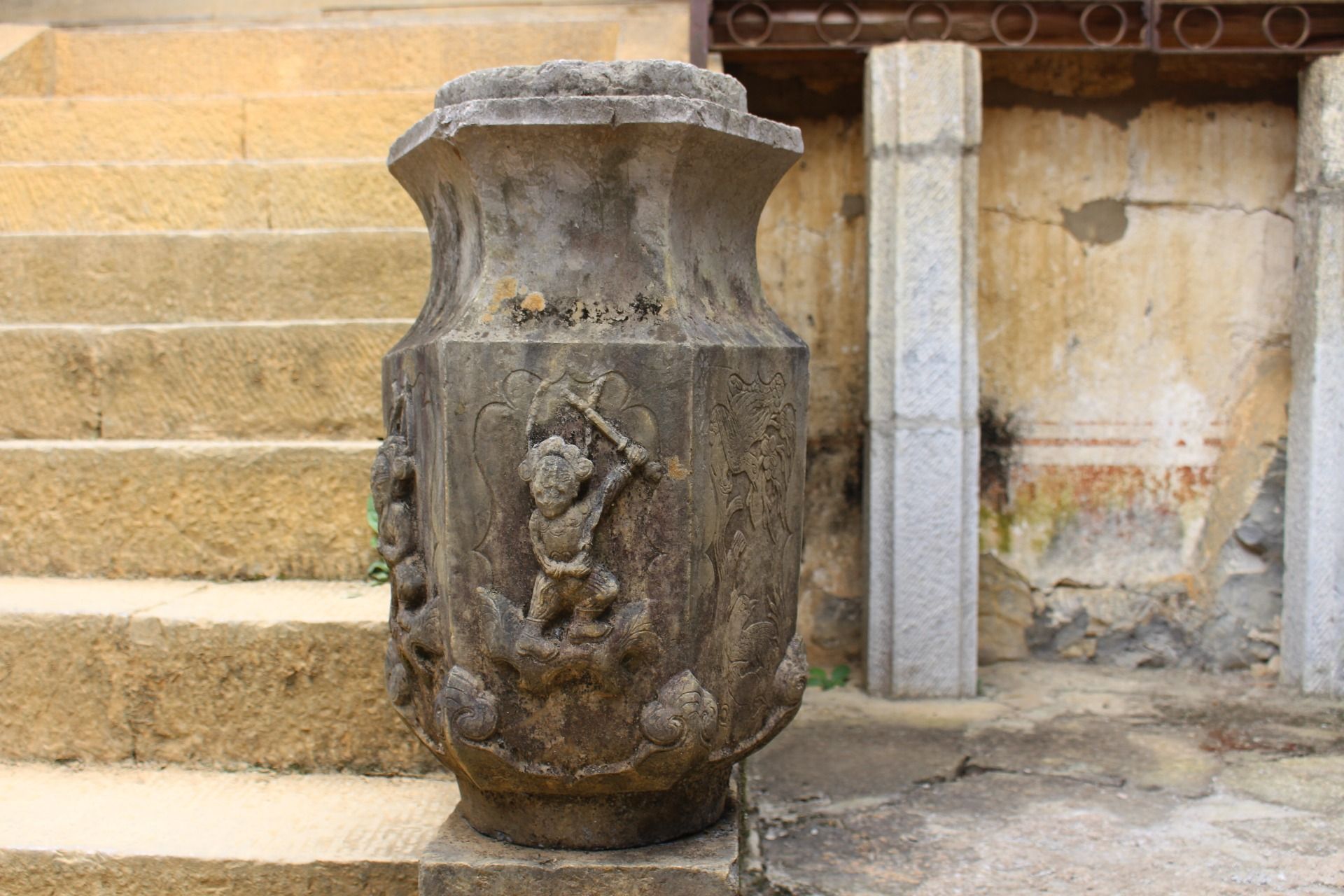 The mansion shows sculpture art with sophisticated details. The main building is the residence of the "king" of the Vuong family. In the central hall, there is a "Bien Chinh Kha Phong'' horizontal lacquered board in Chinese conferred by King Nguyen Khai Dinh as a gift to King Meo, which means "this border force is strong''. 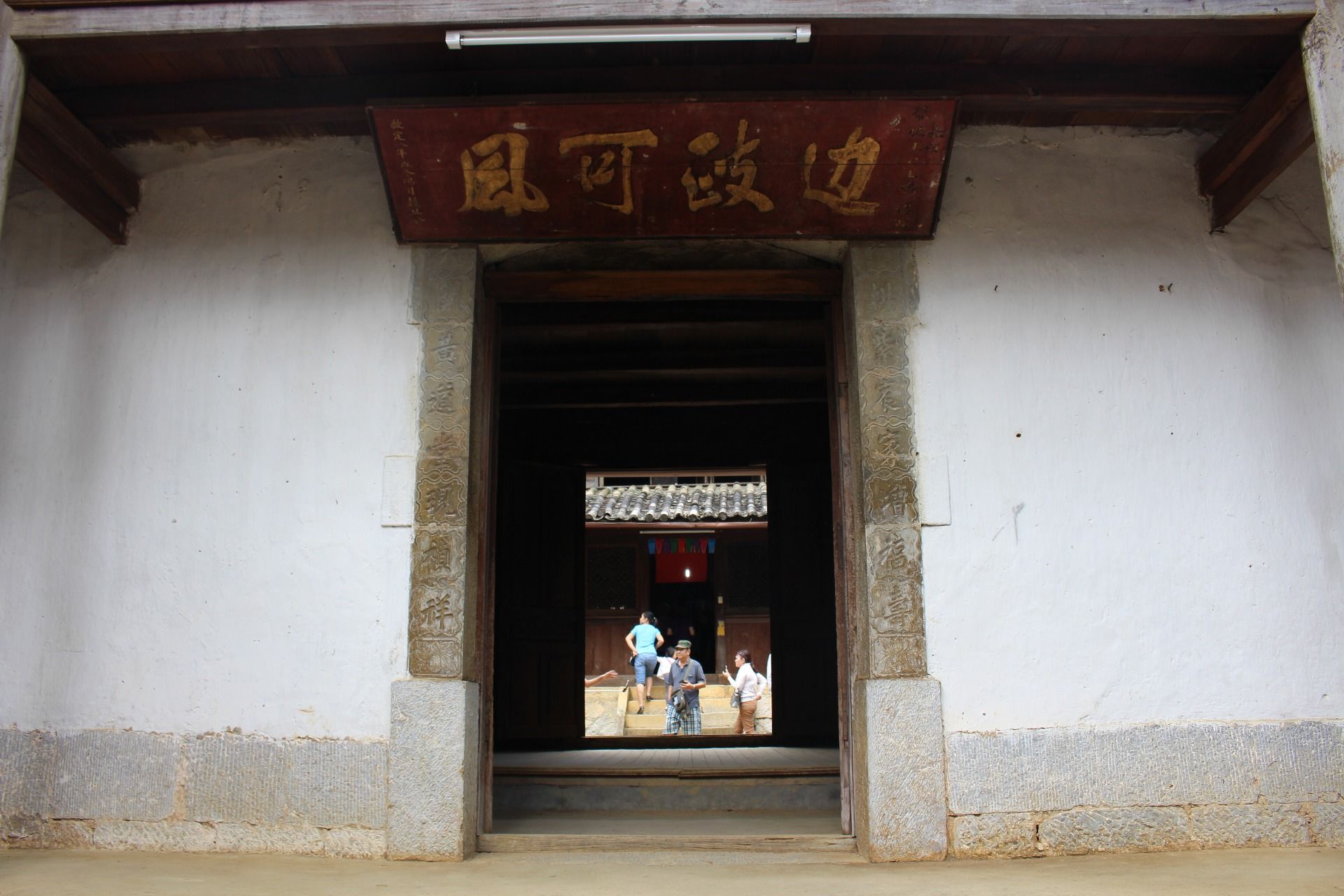 The horizontal lacquered board given by King Nguyen Khai Dinh. Photo: vanhien

In addition to the impressive architecture, its location is interesting as well. This mansion is hidden in the middle of the valley with a lot of mountains around, whilst the outside is surrounded by two stone walls. It can be said that the mansion of the Vuong family was a symbol of highland prosperity. 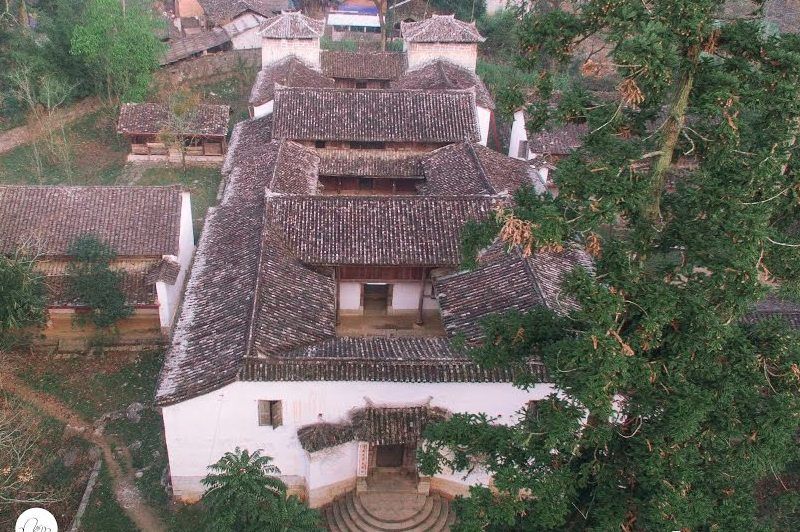 This mansion is hidden in the middle of the valley with mountains covered with clouds. Photo: Danhnamtravel

Notes when traveling to Ha Giangg

You need to check the brake system of your vehicles and refuel them before departing; Do not drive at high speed to assure your safety.

You should also bring lightweight clothes which are suitable for the weather conditions at that time. In winter, you should prepare thick coats as the temperature in Ha Giang at night can drop to -3 degrees Celsius. 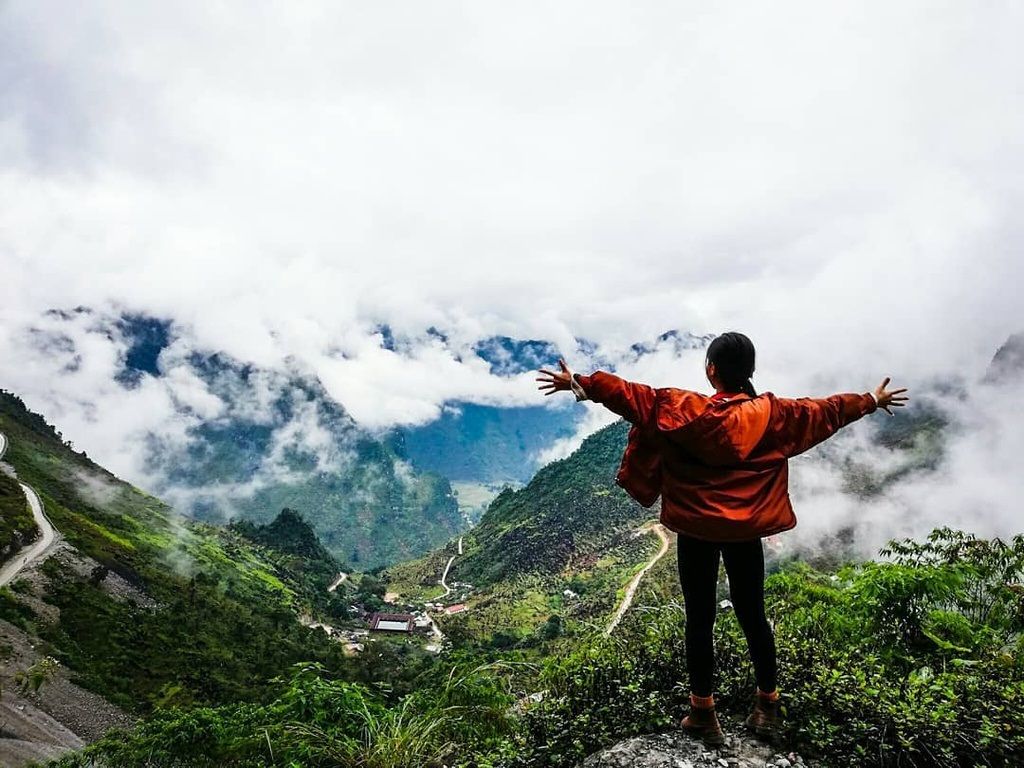 Traveling to Ha Giang by motorbike is a must-try experience. Photo: zing.vn

Ha Giang is the northernmost land of Vietnam with the wild and majestic beauty of the mountains and the highlands. At the same time, all kinds of flowers will definitely make any visitor fascinated.