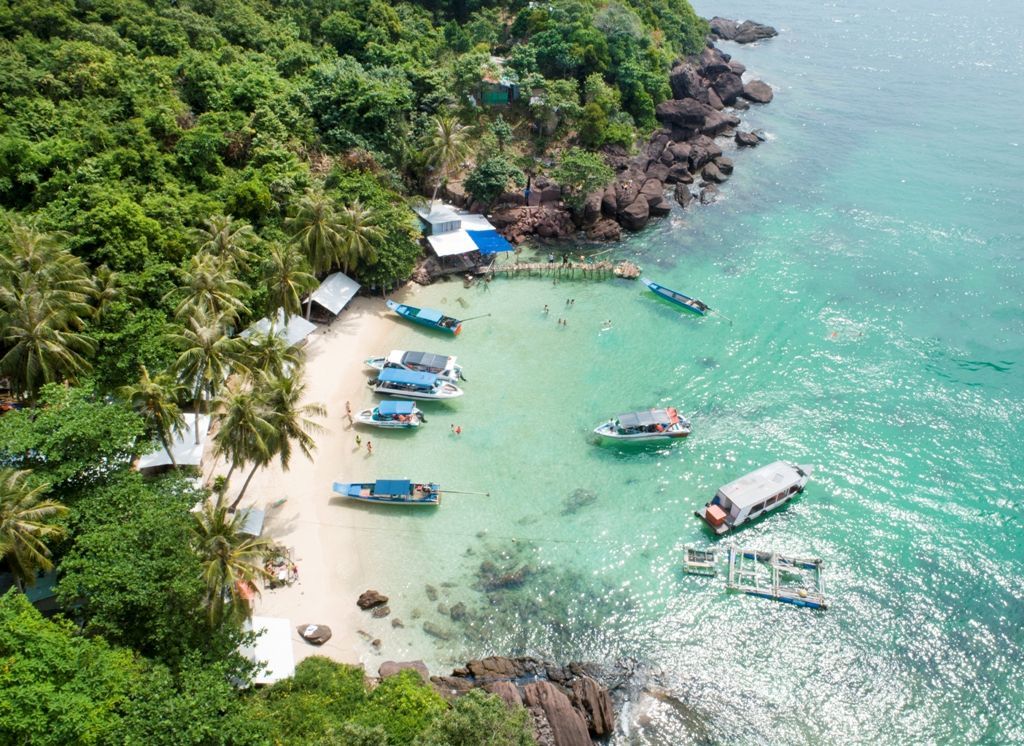 The South of Phu Quoc Island (Nam Dao) is famous for its unspoiled nature and many interesting tourist attractions. Here are some places you should definitely visit on “the South Island”.

Phu Quoc is regarded as “the pearl island” in Kien Giang province, which is known as the largest island and - at the same time - the first island city of Vietnam. Nam Dao is the southern part of Phu Quoc island, which has famous tourist attractions such as Sao Beach, An Thoi fishing port, the barrel house (where the fish sauce is made) and pearl farm. 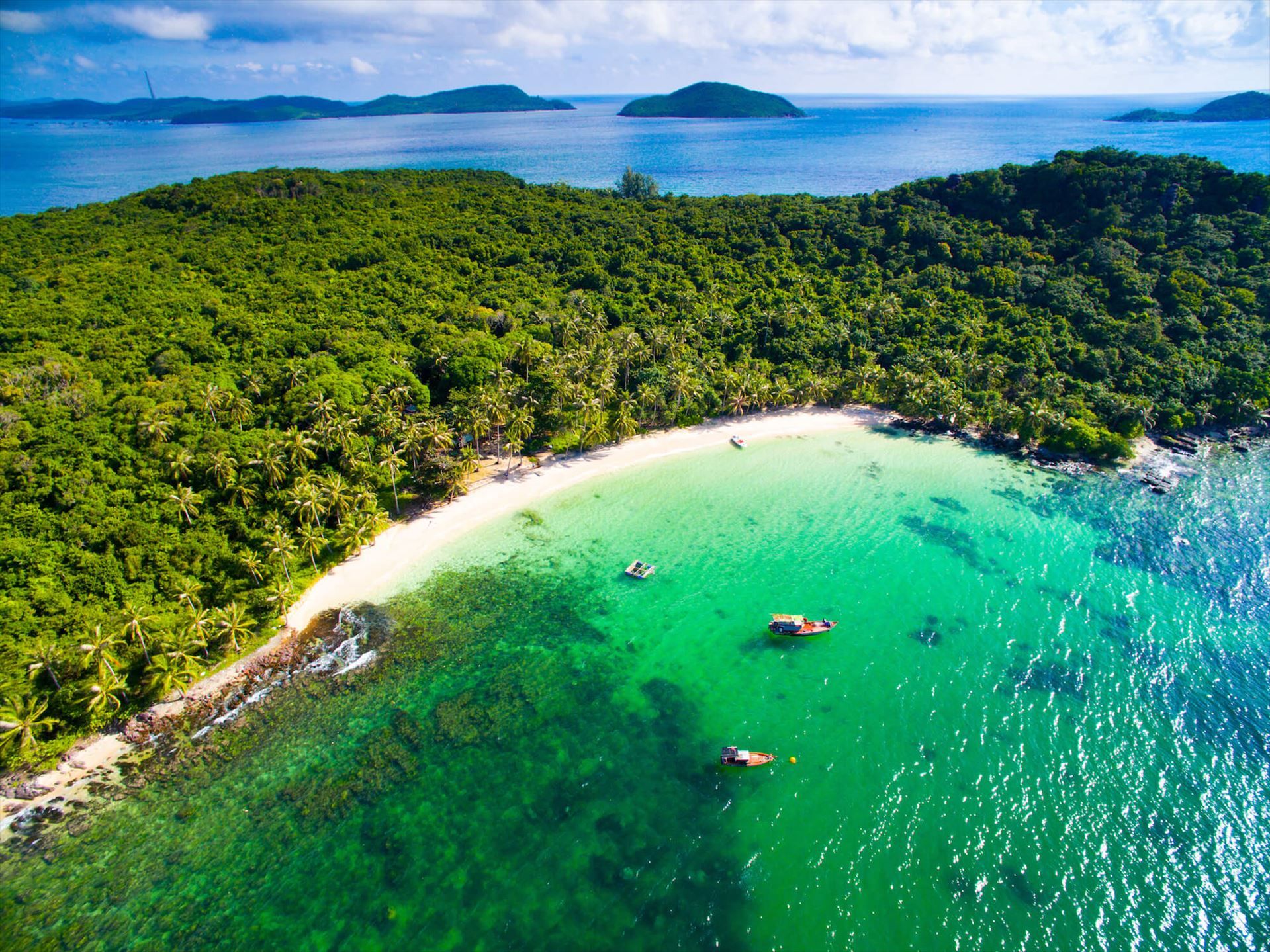 Nam Dao is located in the Kien Giang Biosphere Reserve and is recognized by UNESCO as one of the largest biosphere reserves in Southeast Asia with all the typical features of Phu Quoc island. There are many ways for you to fully enjoy the beauty of this island, but you should utilise Hon Thom’s cable car to admire its natural landscape from above. 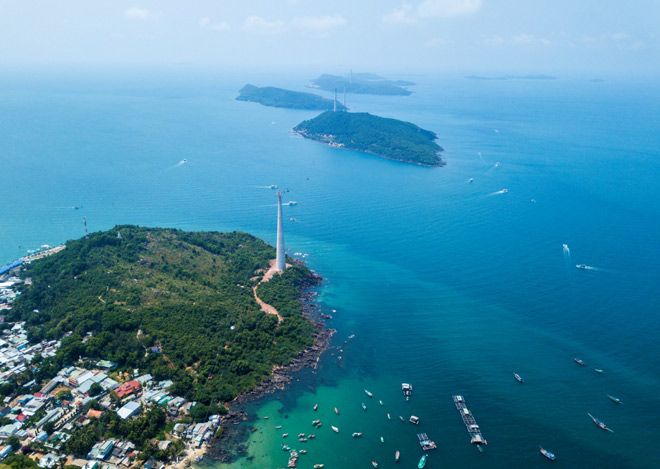 An Thoi fishing port, which is located in An Thoi town, is the oldest seaport in Phu Quoc. When arriving in An Thoi, you will definitely be satisfied with the sight of boats full of fish at the port early every morning. 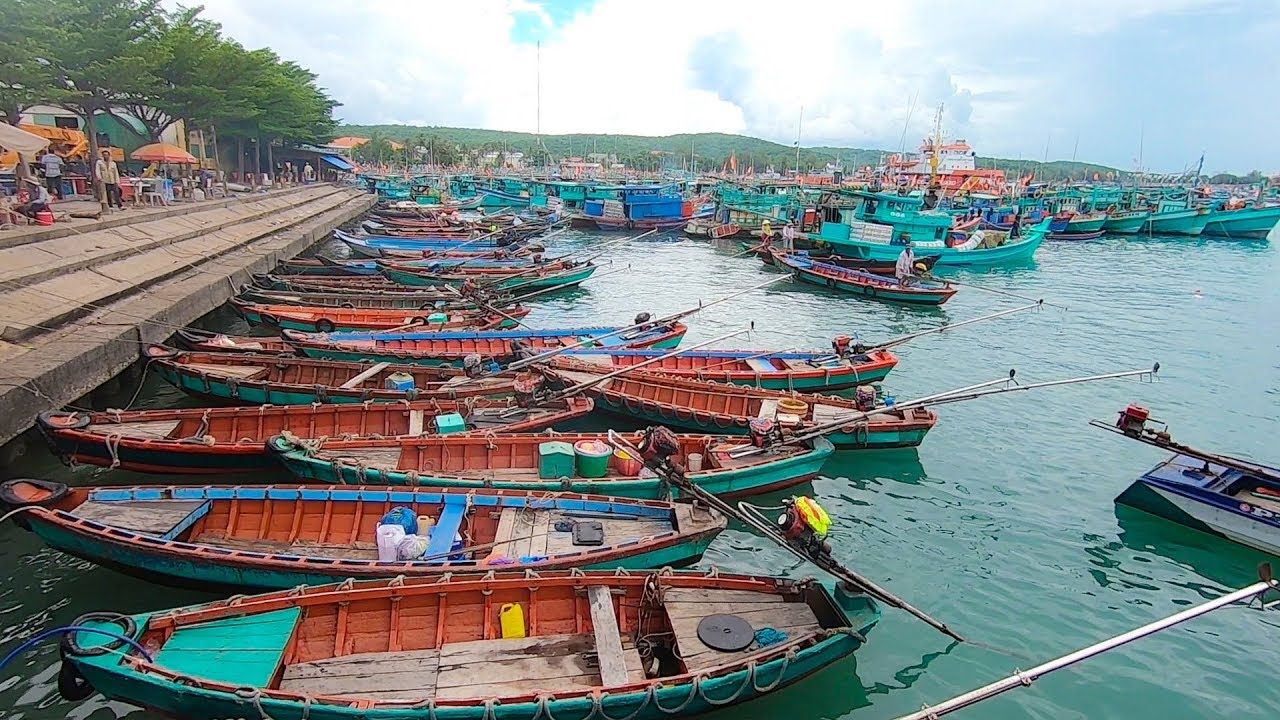 An Thoi is the oldest seaport in Phu Quoc. Photo: congthuong.vn

This port is also the berth of many ships for tours of diving to see coral reefs, sea fishing, and night squid fishing. In addition, An Thoi is also “the home” to many shipbuilding companies as well as seafood drying factories, so it is also an ideal place for you to buy dried seafood as gifts for friends and family. 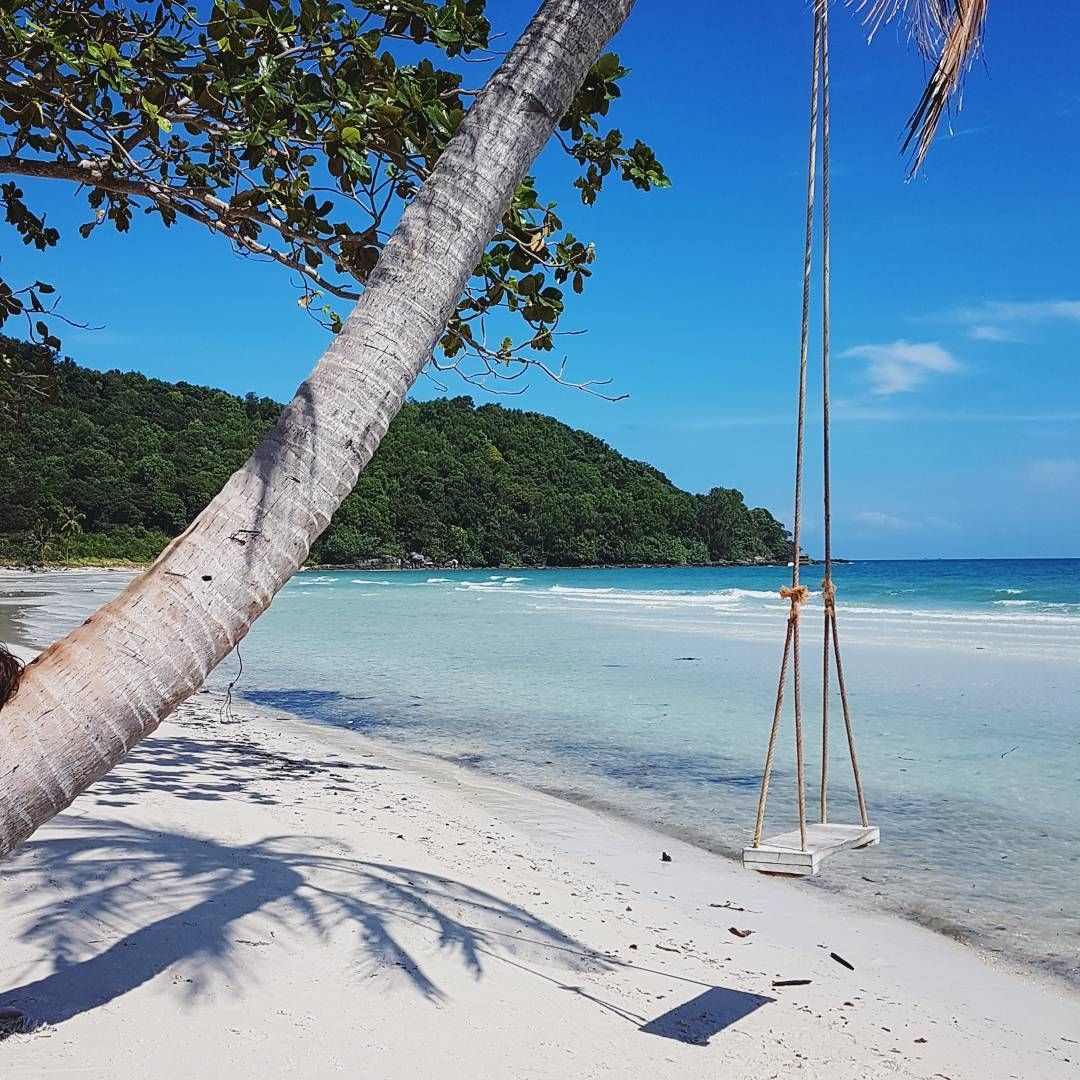 Sao Beach is one of the most beautiful beaches in Phu Quoc with crystal clear blue water and long stretches of smooth white sand, which is very suitable for swimming. In 2015, CNtraveler voted Sao Beach into the top ten most beautiful and pristine beaches in the world. According to locals, the name of this beach originates from the fact that in the past, at sunset, a lot of starfish moved from the sea to the shore, so they called it “Sao Beach” (The Beach of Starfish). 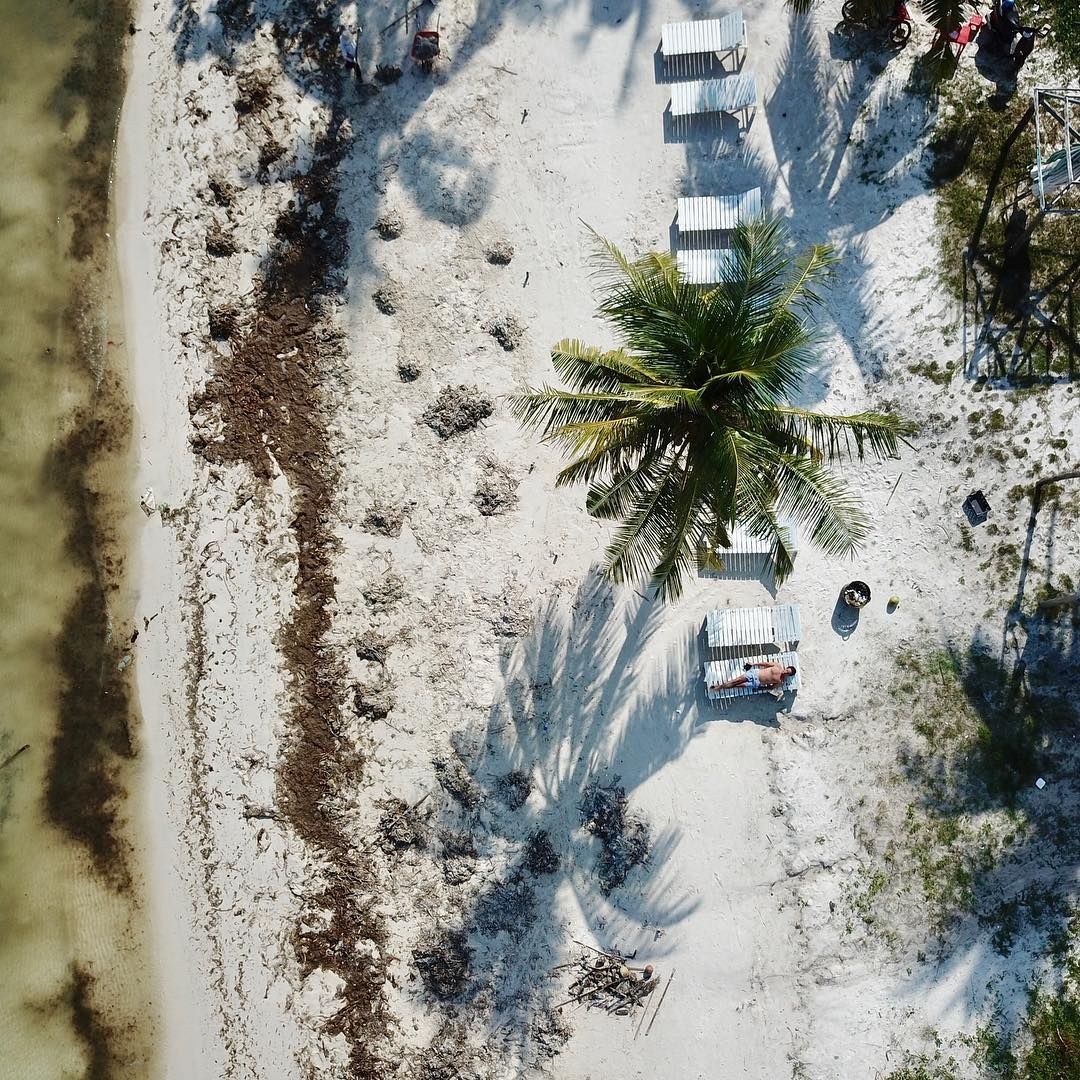 When coming to Sao Beach, not only can you enjoy its pure natural beauty, but you will also have the opportunity to participate in activities such as swimming, sunbathing or even just lying under the shade of coconut trees to enjoy the peaceful space.

It would be a big “mistake” if you choose not to visit the pearl farming areas in Nam Dao. In these areas, you will be able to learn about the production of pearls by witnessing the process of separating them from the mussels and listening to the general knowledge about them as well as the steps involved in pearl farming. 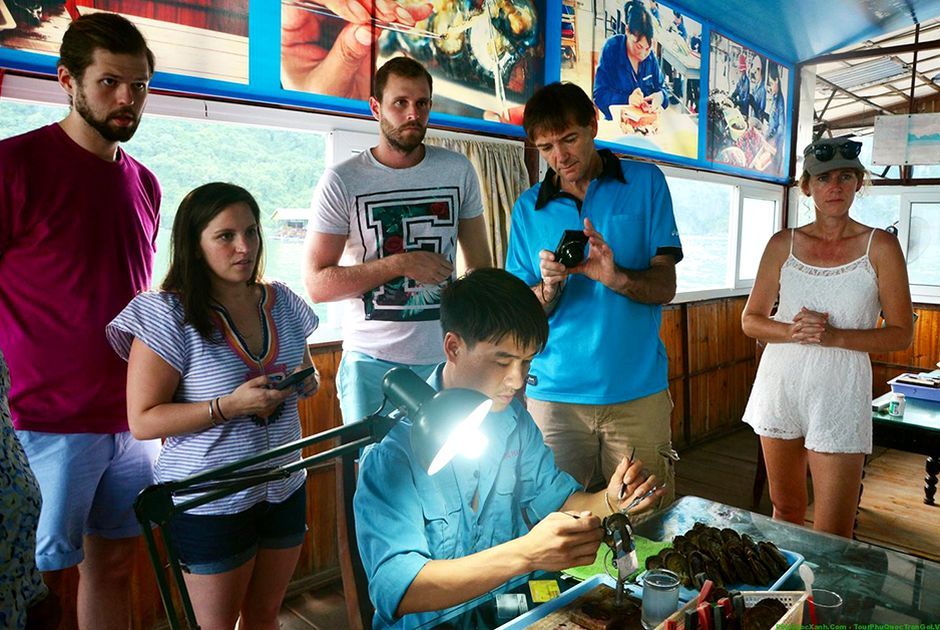 Learning about the process of pearl production at the pearl farming area in Nam Dao. Photo: yeudulich.com 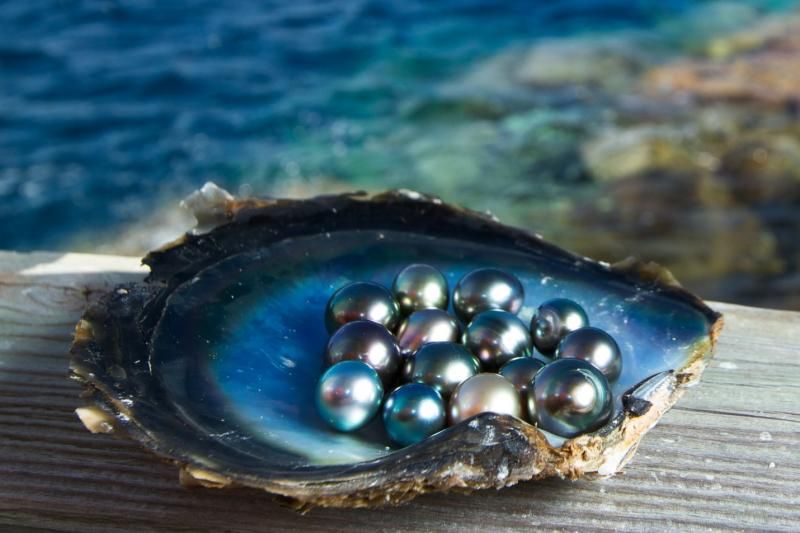 When coming to Nam Dao, you will have the opportunity to visit “the barrel house” - which is the famous fish sauce factory in Phu Quoc. Phu Quoc has a tradition of making fish sauce for over 200 years and is considered the place to produce the best products in Vietnam. 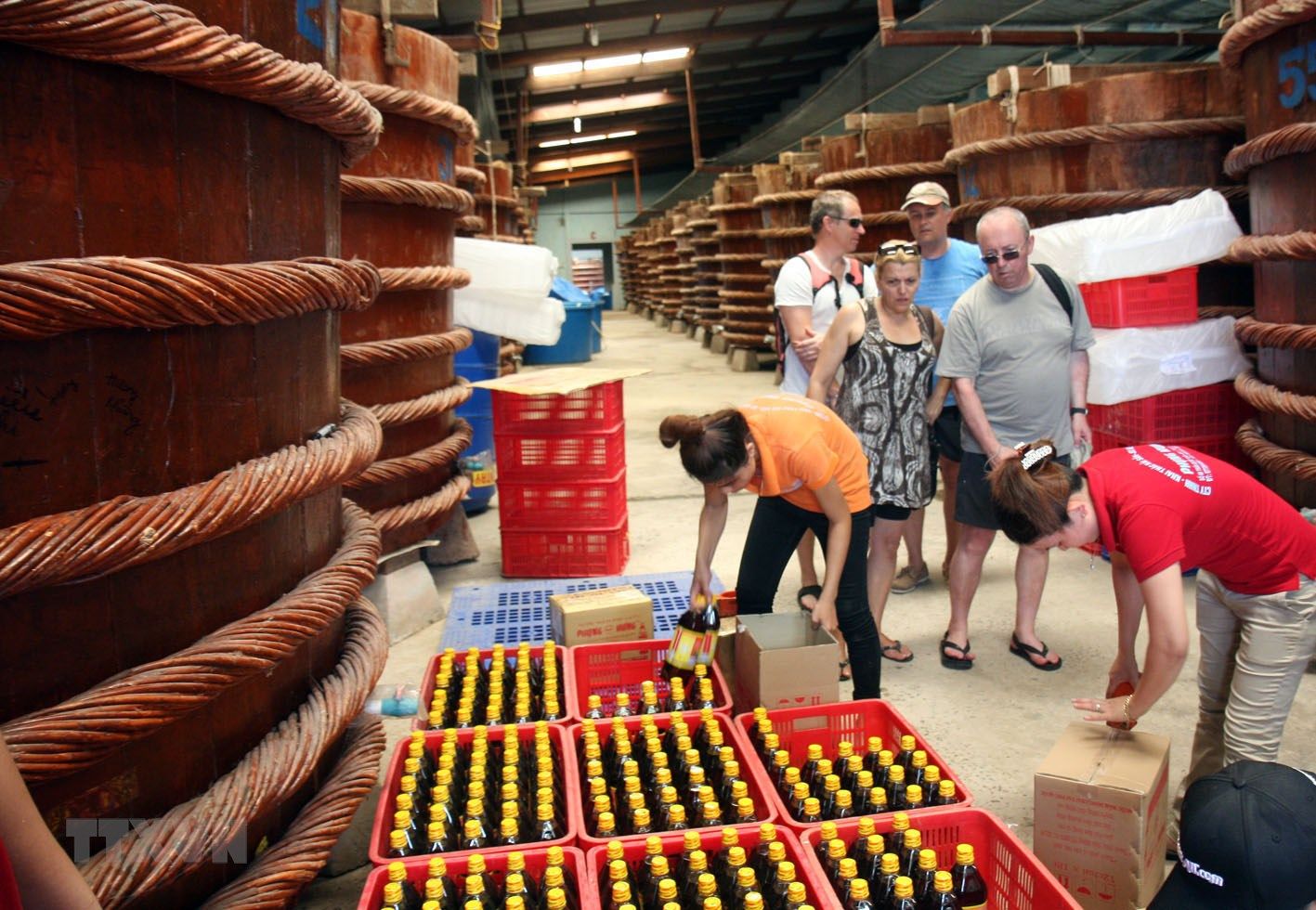 At the fish sauce factory, you will be able to witness firsthand the process of making fish sauce - the type famous for its rich taste and aroma of spined anchovies - a specialty that is only available in Phu Quoc. There are huge barrels of fish sauce that are carefully fermented from a few months to a whole year here. You can learn about the process and taste the finished product right here to feel the quintessence in every drop of fish sauce - the product from the hard work of the fishermen. 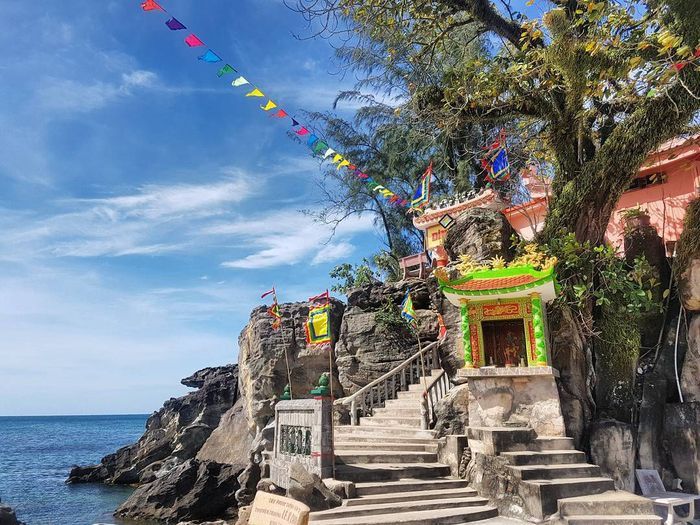 Dinh Cau is on a cliff. Photo: datviettour.com.vn

Dinh Cau, which is located in Quarter 2, Duong Dong Ward, is also known as Long Vuong Temple and has long been considered a religious symbol by the people on the island. "Cau" (Uncle) here is considered a character with compassion and always ready to rescue seafarers. According to the elders on the island, Dinh Cau, which is located on a cliff reaching out to the sea while “standing proudly in front of the waves”, has existed for a long time. In the past, the livelihood of the Phu Quoc people mainly depended on the sea, but they often encountered many dangers from storms. One day, suddenly a cliff appeared at the sea mouth, and the locals considered this as an omen from the spiritual force, so they built a temple to pray for peace. On holidays, especially the Lunar New Year or before going to the sea, people often come here to pray for luck and peace. 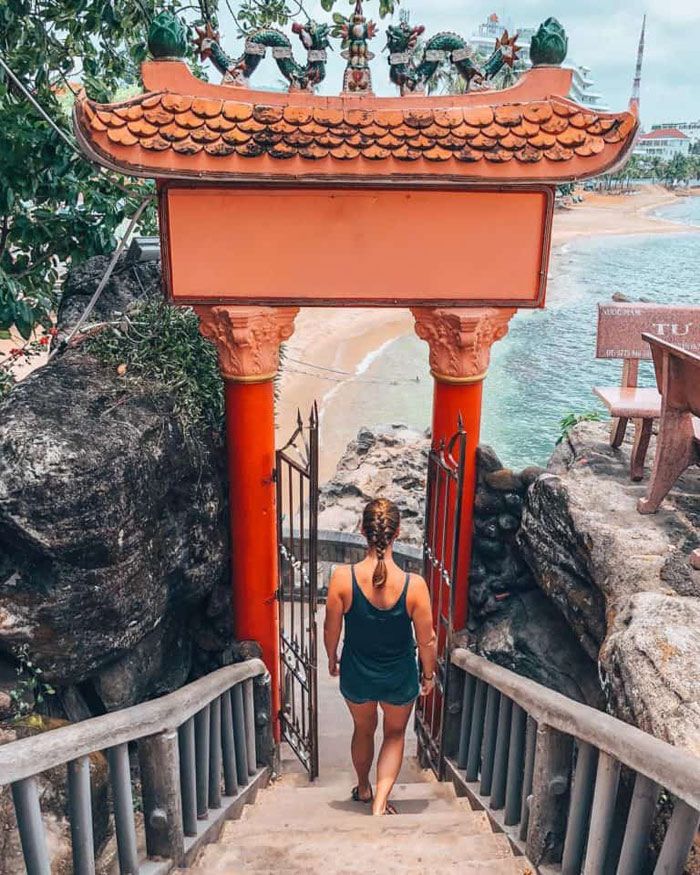 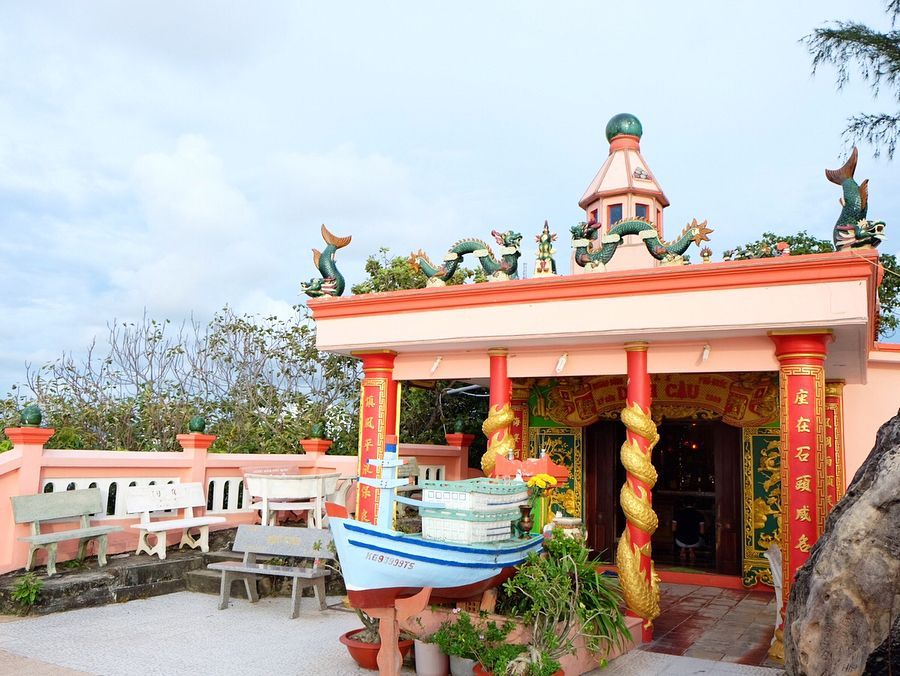 Inside the temple. Photo: halotravel

Dinh Cau was initially made of trees and leaves, but through many restorations, the work is now more spacious and majestic, but still retains the ancient features as it had before. Just have a glance at Dinh Cau and you will notice the typical architecture of temples and pagodas of Northern Vietnam with the red tiles and the gate with curved boat-shaped eaves. The temple is splendidly decorated inside; the front porch is paved with ceramic tiles, while the top is horizontal lacquered board shaped like an ancient Chinese book. The walls on both sides are decorated with flowers and a parallel sentence with the meaning “Dinh Cau is located at the top of a cliff like the head of a tortoise, and its reputation of Dinh Cau is all over the country”.

Tranh Stream, which is located in Suoi May hamlet, Duong To commune - about 15km from Duong Dong town center, is formed from small ditches on Ham Ninh mountain. Although Phu Quoc has a limited amount of freshwater, the water source of Tranh Stream is always abundant. 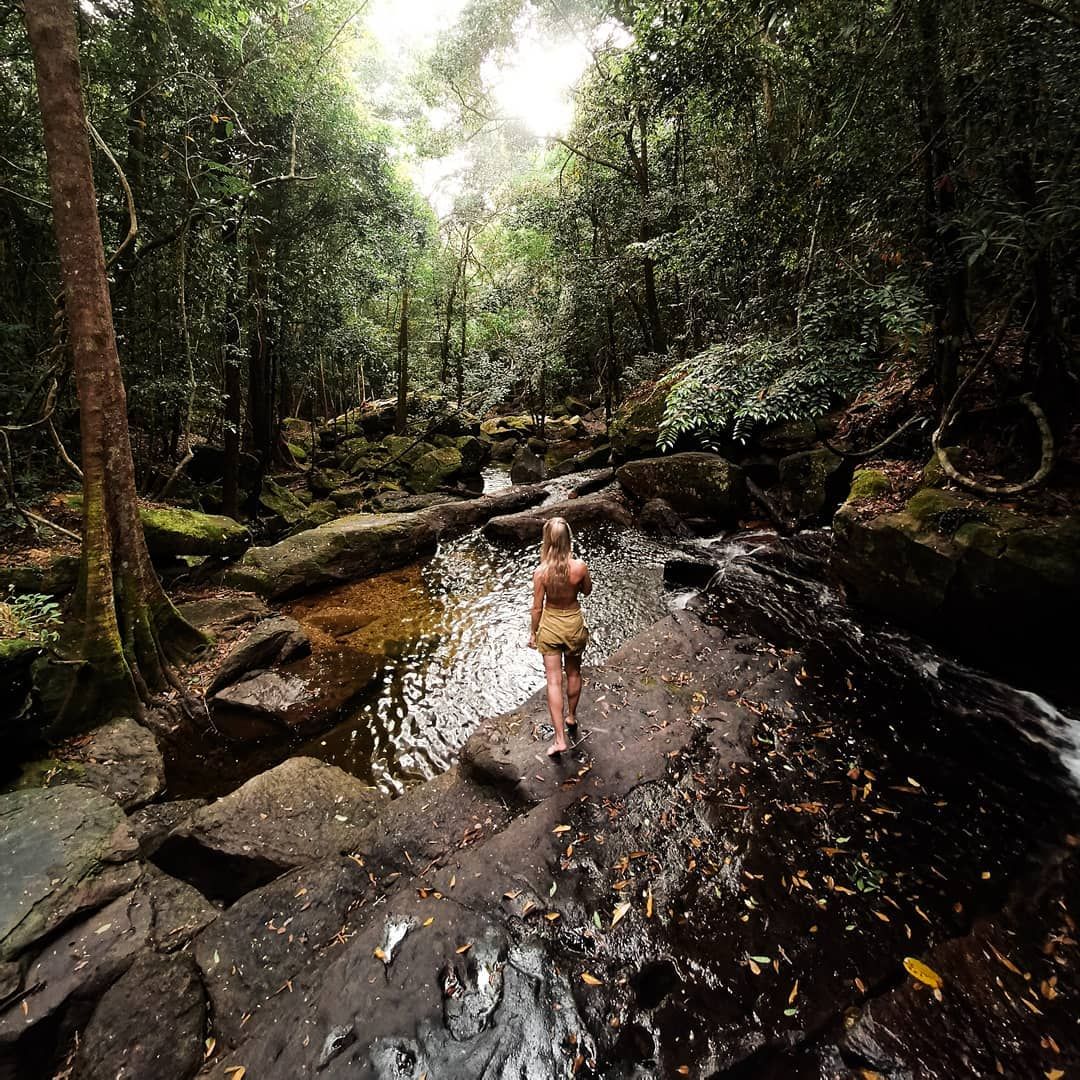 The road from the foot of the mountain to the upward stream of Suoi Tranh is rough with jagged rocks. Photo: @mingmeow157

To “conquer” Tranh Stream, you need to depart from the foot of the stream to its head, but this is not a simple task due to the presence of dirt roads with many jagged rocks and lush trees. When you have reached the head, you will be surprised at the stream as it is not too big but still majestic which flows with water producing large amounts of river foam. The clear water flowing through the ravines creates a very beautiful natural picture. At the same time, the air here is also cool, helping you to find peace of mind and escape from the hectic city life. 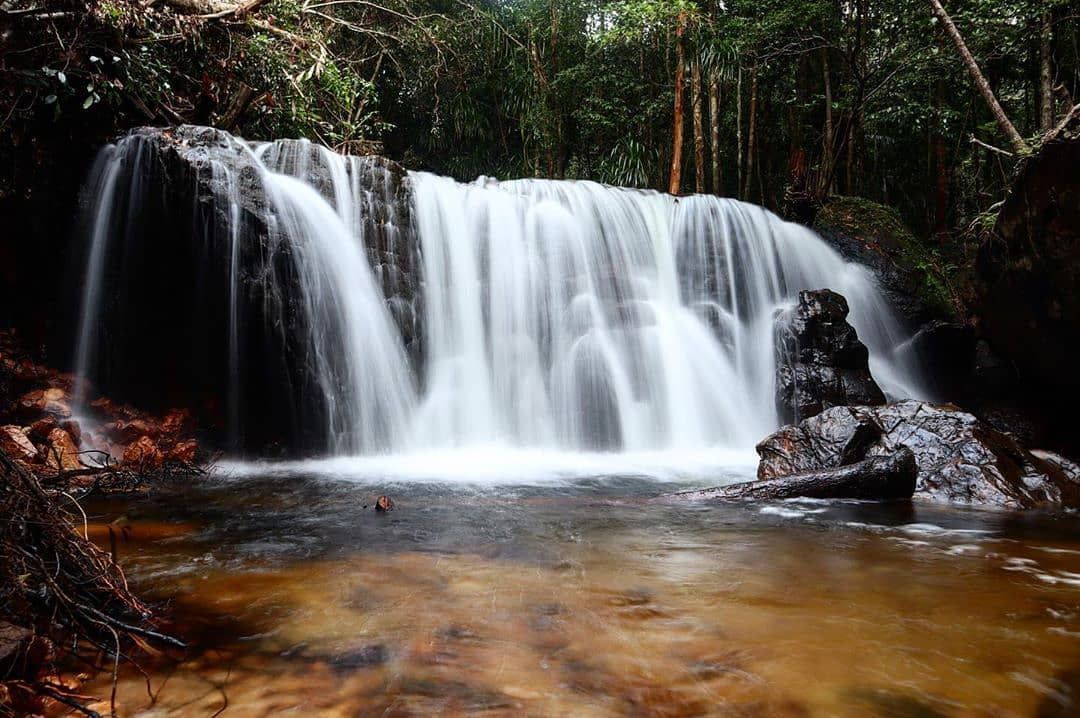 Tranh Stream is both beautiful and majestic. Photo: @phuquocisland_beauty

Nam Dao is an interesting and attractive destination of Phu Quoc, where you can not only enjoy the wild and beautiful nature of beaches and clear streams, but also have the opportunity to visit the oldest port in Phu Quoc and learn about the spiritual culture of the local people at Dinh Cau. All of them will bring you memorable moments along your journey of discovery on the beautiful South of Phu Quoc Island.