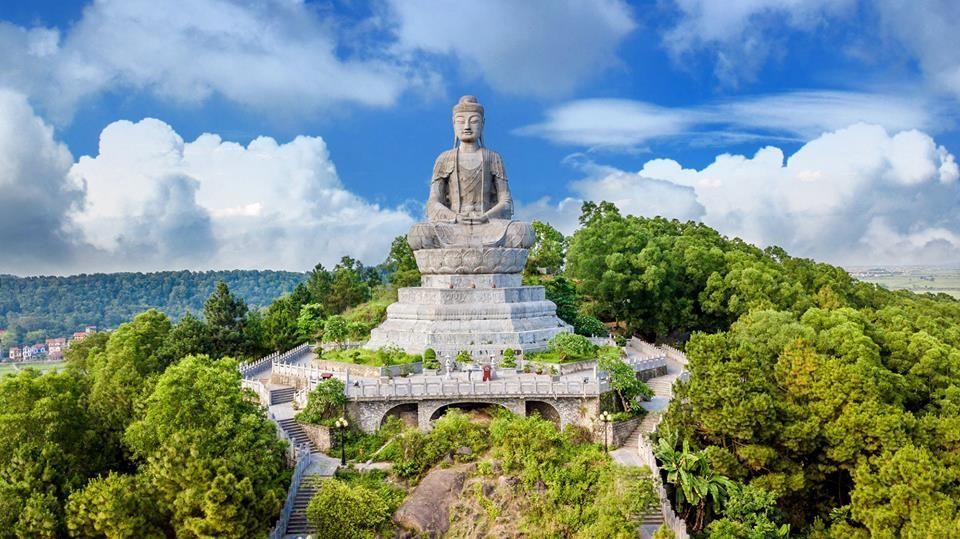 Phat Tich Pagoda in Bac Ninh province not only attracts tourists thanks to its unique architecture, but also due to the largest stone Buddha statue in Vietnam. Visit the pagoda and you will definitely have memorable experiences from this famous spiritual site in Vietnam.

The pagoda with a history of nearly a thousand years

Phat Tich is also known as Van Phuc, which is a very sacred pagoda located on the southern slope of Phat Tich mountain in Phat Tich commune, Tien Du district, Bac Ninh province. The pagoda is about 25km to the east of Hanoi.

According to old documents, Phat Tich Pagoda was built by King Ly Thanh Tong in the 4th year of Long Thuy Thai Binh reign (1057) with the initial name “Thien Phuc”. In 1066, King Ly Thanh Tong built a high tower inside which was a Buddha statue with a height of 1.87m. In 1071, King Ly Thanh Tong traveled around this region and wrote the word "Buddha" (in Chinese) with a length of up to 5m, he then asked artisans to engrave it in stone and place it on the mountainside. Legend has it that, in 1129, during the reign of King Ly Than Tong there was a ceremony to inaugurate 84,000 terracotta stupas which were located in many places along the country, Thien Phuc then became the National Pagoda (Quoc Tu in Vietnamese). 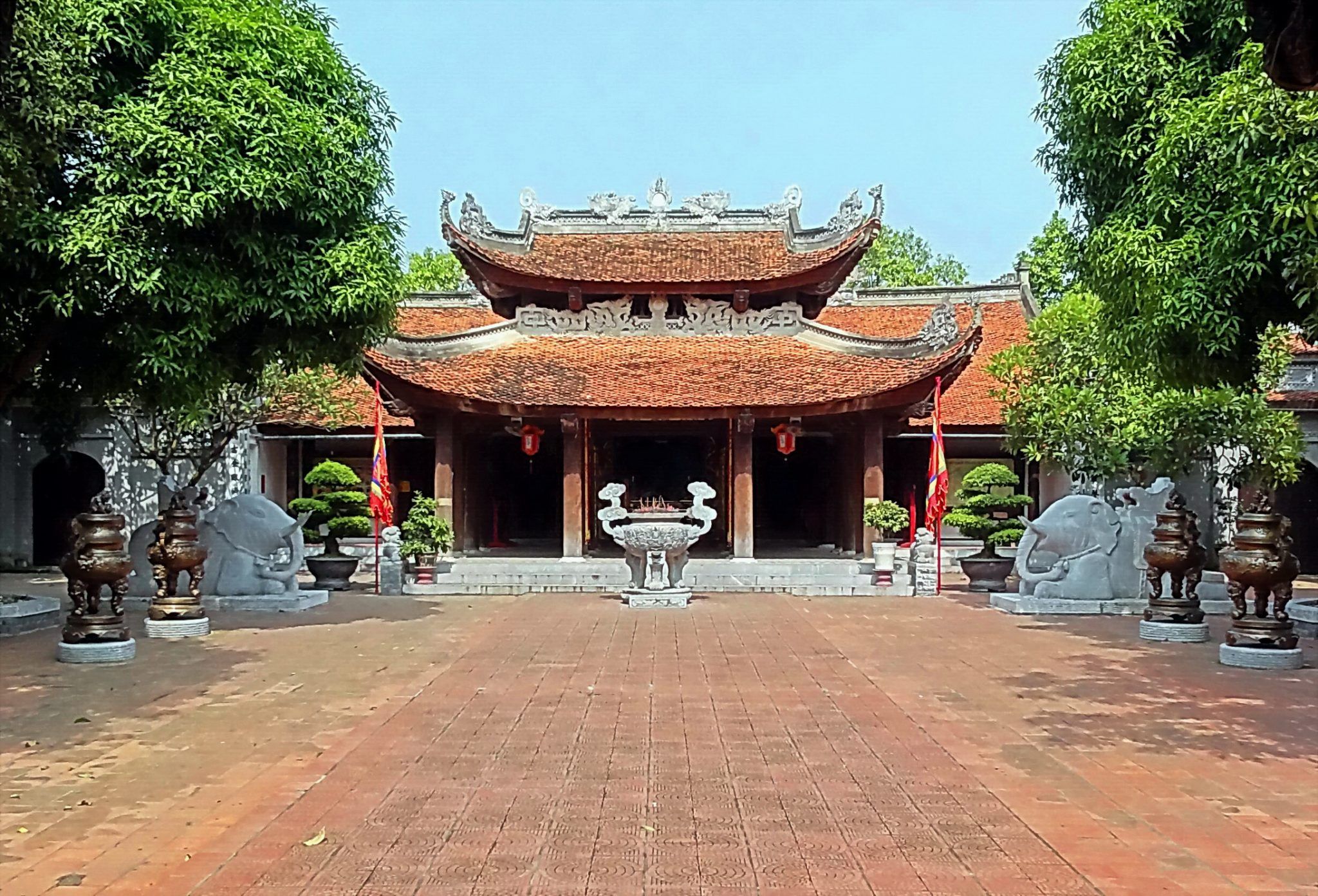 Under the reign of the Tran Dynasty, the pagoda was renamed “Van Phuc”, and King Tran Nhan Tong built a large library and Bao Hoa palace in the pagoda campus. After the inauguration, King Tran Nhan Tong composed a collection of poems "Bao Hoa Du But" with up to eight volumes, which are still well-known to this day.

The inscription on the stele “Van Phuc Dai Thien Tu Bi” from the seventh year of Chinh Hoa reign (1686) praises the beauty of the pagoda scene: "As a charming beauty spot in Tien Du, Phat Tich pagoda is located in the south of the district and surrounded by Phuong Linh mountain and rivers. Notably, there is a stone table on the peak of the mountain...”

In the Le Dynasty - the seventh year of Chinh Hoa (1686) - under the reign of King Le Hy Tong, the pagoda was degraded, so it was restored to its old form. From 1949 to 1952, the pagoda was completely destroyed by the wars, leaving only the brick foundation and some statues. In 1959, the pagoda was rebuilt on a small scale to preserve the remaining artifacts. In April 1962, Vietnam recognized Phat Tich Pagoda as a historical-cultural relic.

The typical architecture of the Ly Dynasty

According to researchers, Phat Tich Pagoda was built according to the principle "Noi Cong Ngoai Quoc", which means that the inside is shaped like the letter “Cong” (工) while the outside is based on the letter “Quoc” (国). The architecture of the pagoda accords with the style of the Ly Dynasty (1010 - 1225), which is reflected in many levels of foundation and is constructed deep into the mountainside while gradually rising up to the peak. The pagoda is located on high ground with many stone works such as steps, staircase and embankments. 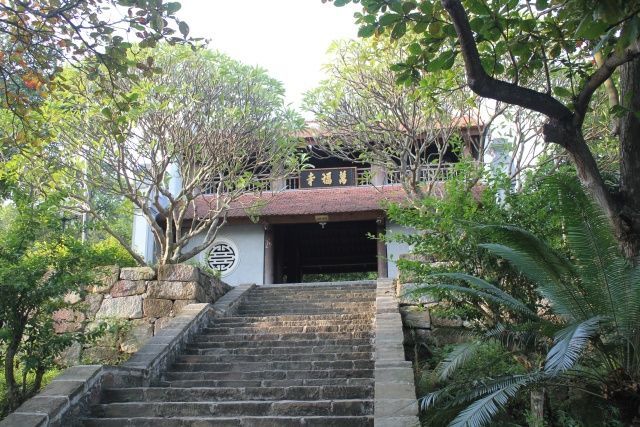 The pagoda is located on high ground with many stone works such as steps, staircase and embankments. Photo: tiendu.bacninh 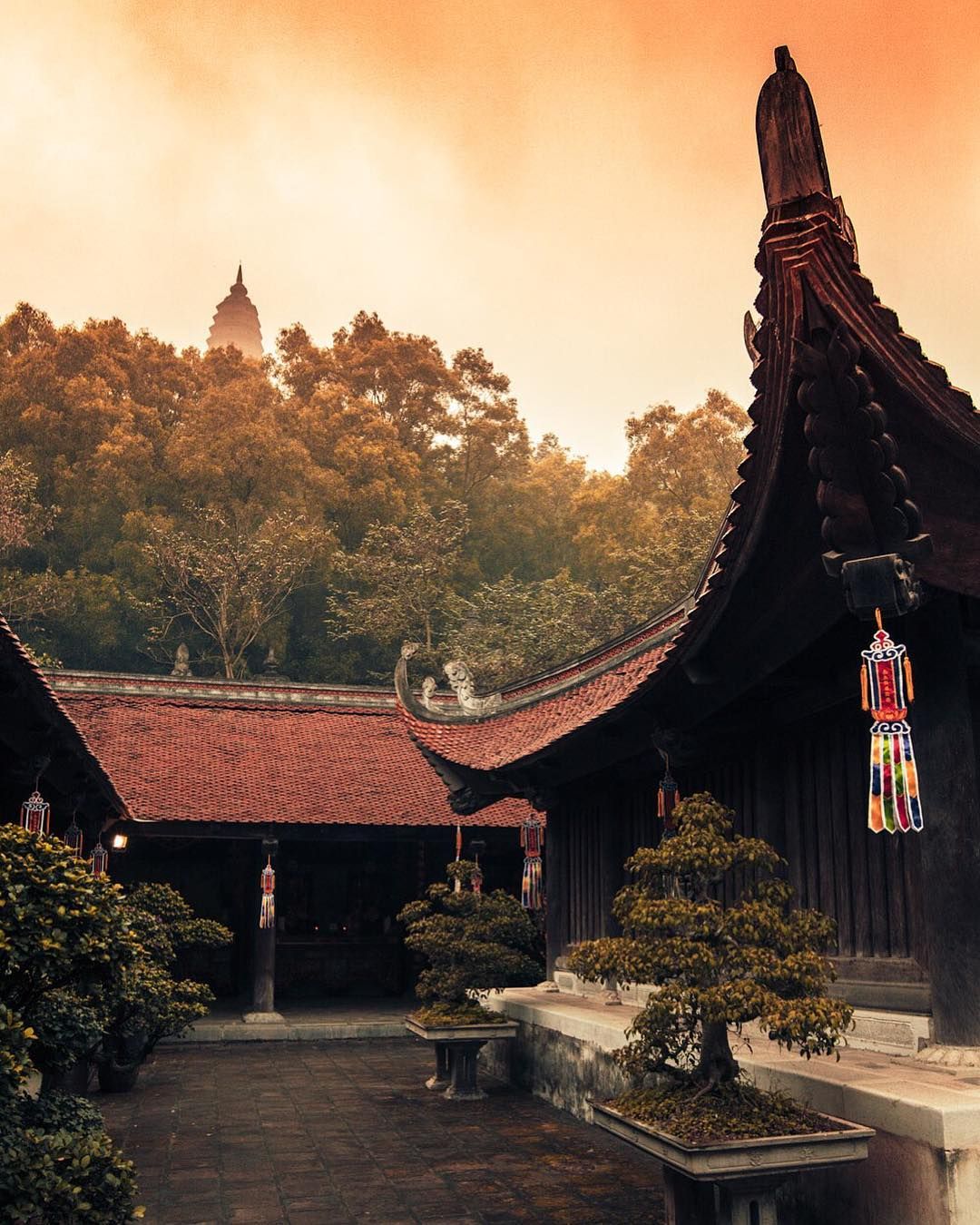 The architecture of the pagoda with its curved roof follows the traditional style of Vietnamese pagodas. Photo: @worldhuzzle

Currently, the pagoda has seven front halls for guests, five halls for worshiping Buddha, seven halls for worshiping the Mother Goddess, and eight compartments used as the ancestral houses. Behind the pagoda are 32 towers, which were mainly built around the 17th century, to store the relics of the pagoda abbots. The most impressive tower is called “Pho Quang” with a height of 5.1m, so you can easily see it from a distance. 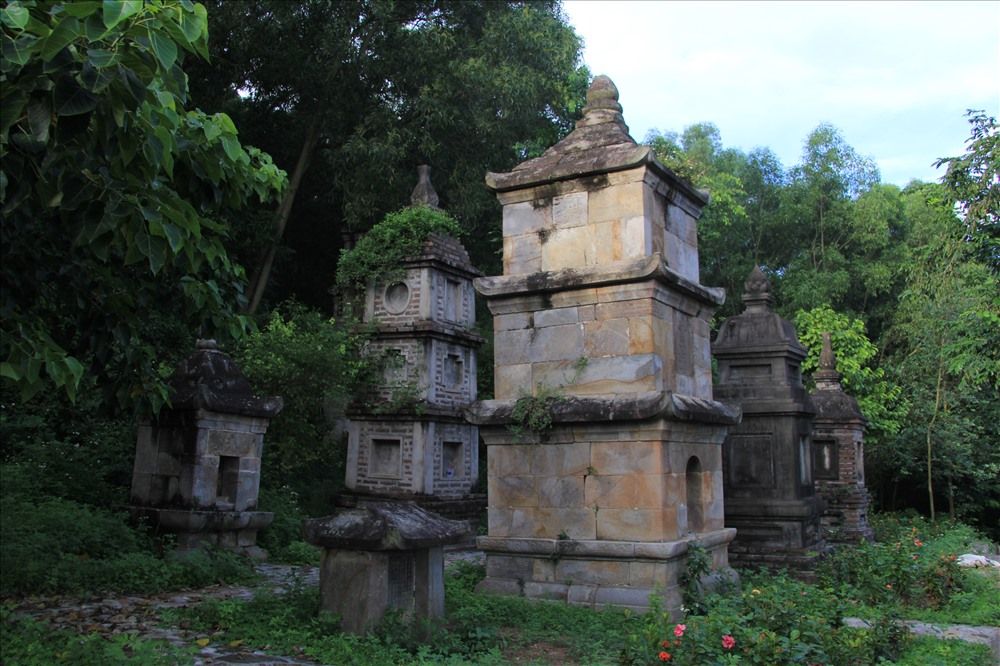 The stupas in the pagoda. Photo: dulich.laodong.vn 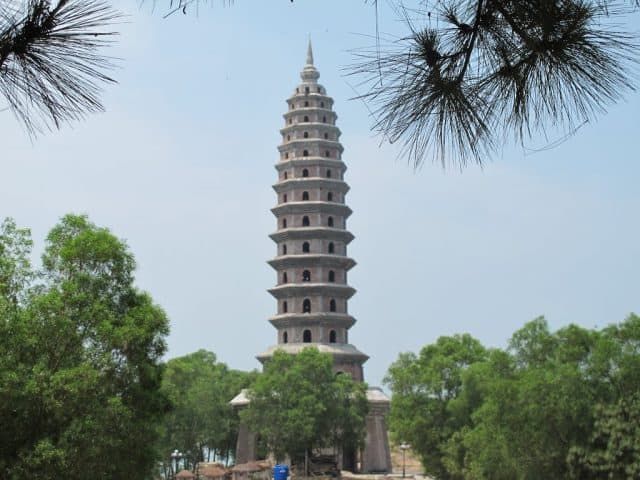 Pho Quang tower with a height of 5m. Photo: vntrip 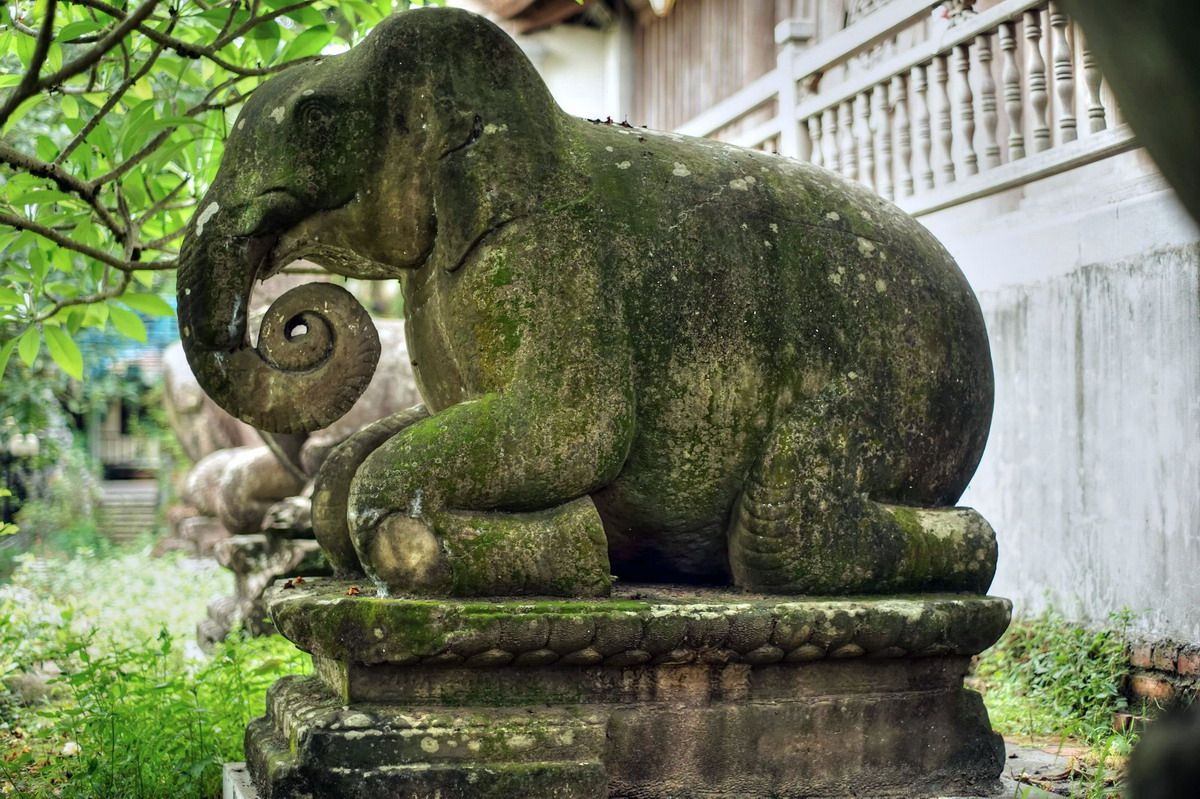 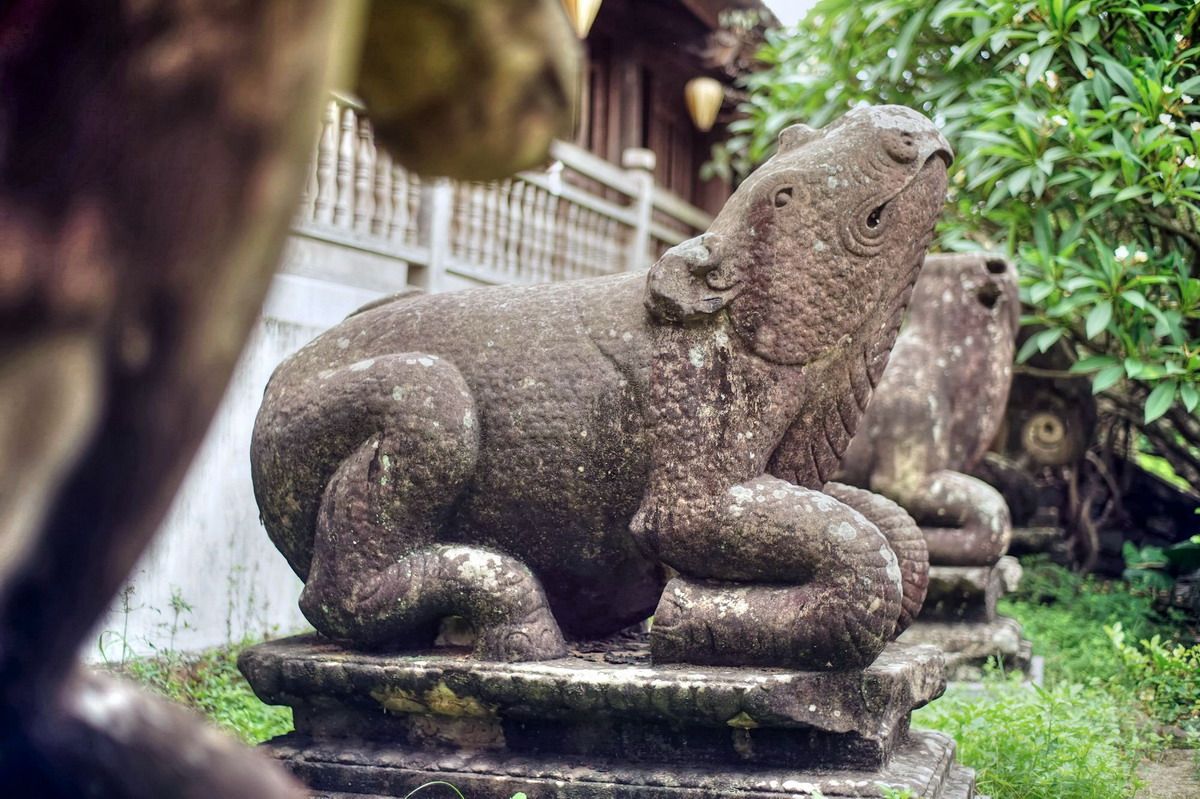 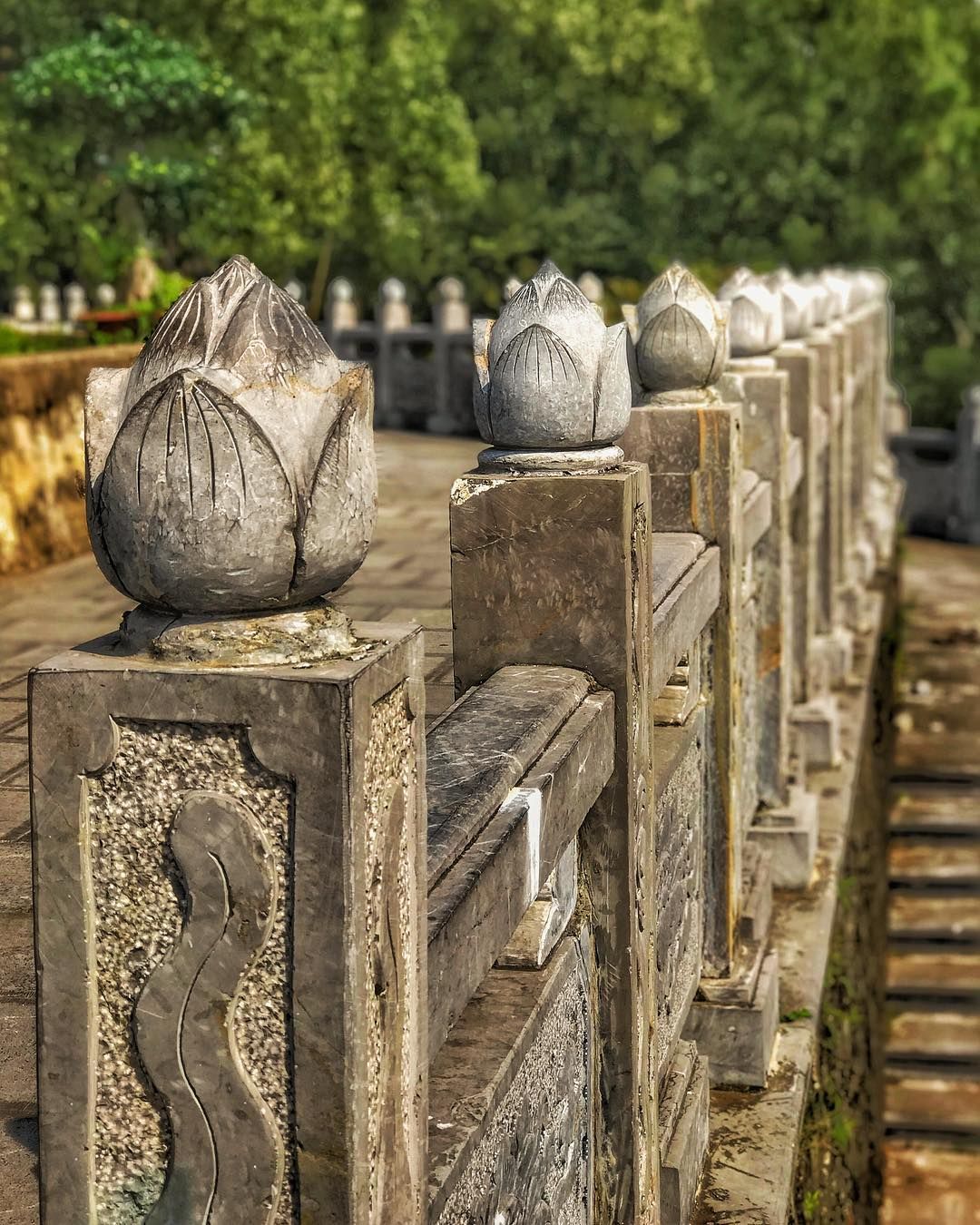 The stone lanterns on the railing of the pagoda. Photo: Mytour.vn

In Phat Tich Pagoda, there are many intricately carved stone works, which are reflected in ten stone statues of mascots lying on a monolithic carved lotus-shaped stone block and lotus lanterns on the railing of the pagoda. The most unique thing is the Buddha statue with a sitting posture which is made from precious natural stone. The statue has a height of 1.85m, dating from the Ly Dynasty with the pedestal and surrounding lotus petals sculpted meticulously. 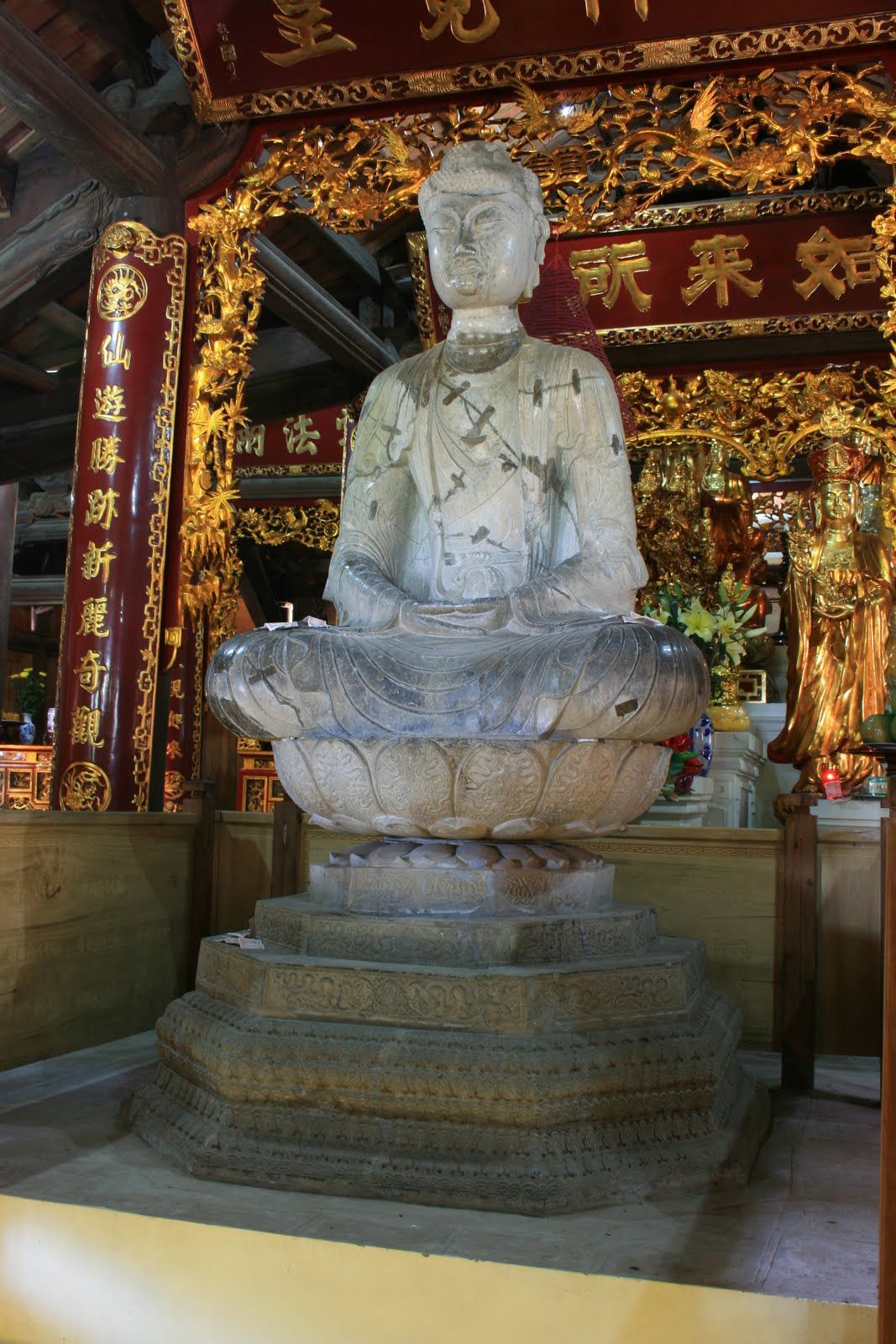 The stone Buddha statue dating from the Ly Dynasty in the pagoda. Photo: buithithanhmai.wordpress

The biggest Buddha statue in Vietnam 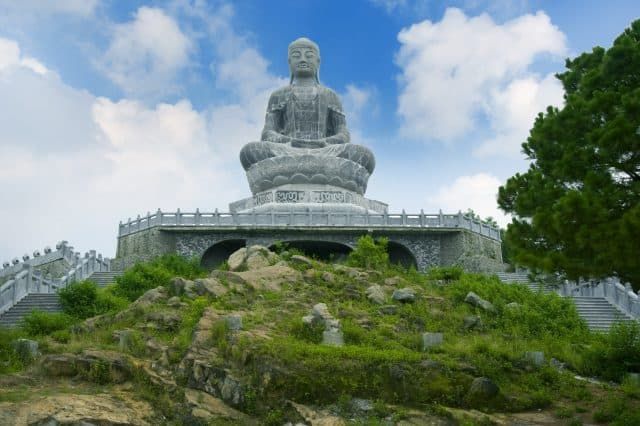 The largest stone Buddha statue in Vietnam is located on the top of Phat Tich mountain.

A special feature of Phat Tich pagoda is the 27m high Amitabha statue with a weight of 3,000 tons located on the top of Phat Tich mountain. The statue was based on the prototype from Amitabha Buddha inside the pagoda on the special occasion of the 1,000th anniversary of Thang Long - Hanoi, which has attracted a lot of domestic and foreign tourists. As one of the largest stone statues in Vietnam, the statue is meticulously carved. From a distance, you can easily see a majestic statue of Buddha sitting in meditation on the top of the mountain. 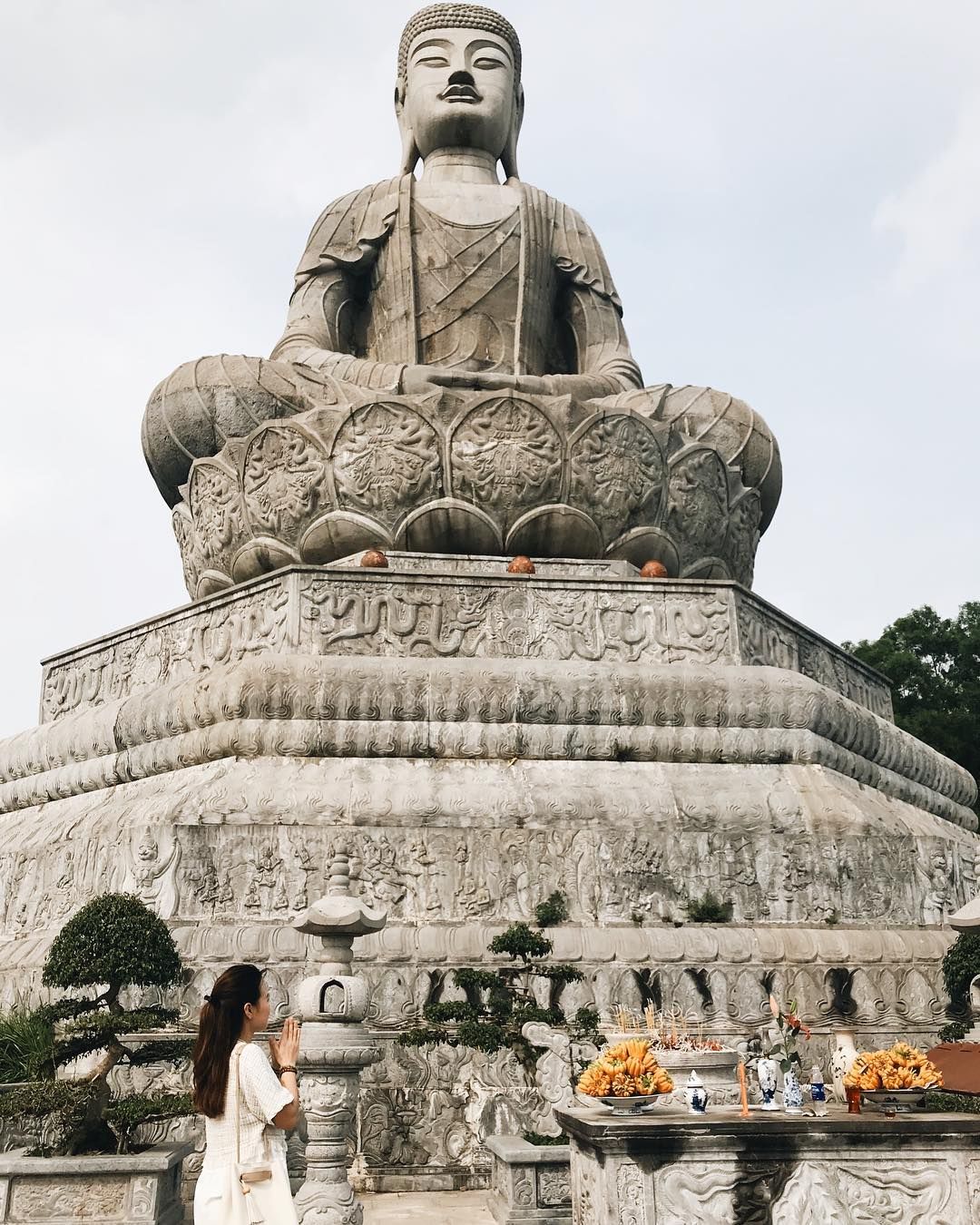 The Buddha statue weighs up to 3,000 tons. Photo: mytour.vn

Directions to the pagoda

If you depart from the center of Hanoi city, you can choose one of the following modes of transportation:

- Motorbike: From the center of Hanoi, travel along the new National Highway No.1 with a distance of about 15km to Bac Ninh province. After moving about 4km more and seeing the road sign "Phat Tich Pagoda", you can turn right on road No.295 and then travel about 7km further to reach the destination. If you travel by car, you can also follow this route. 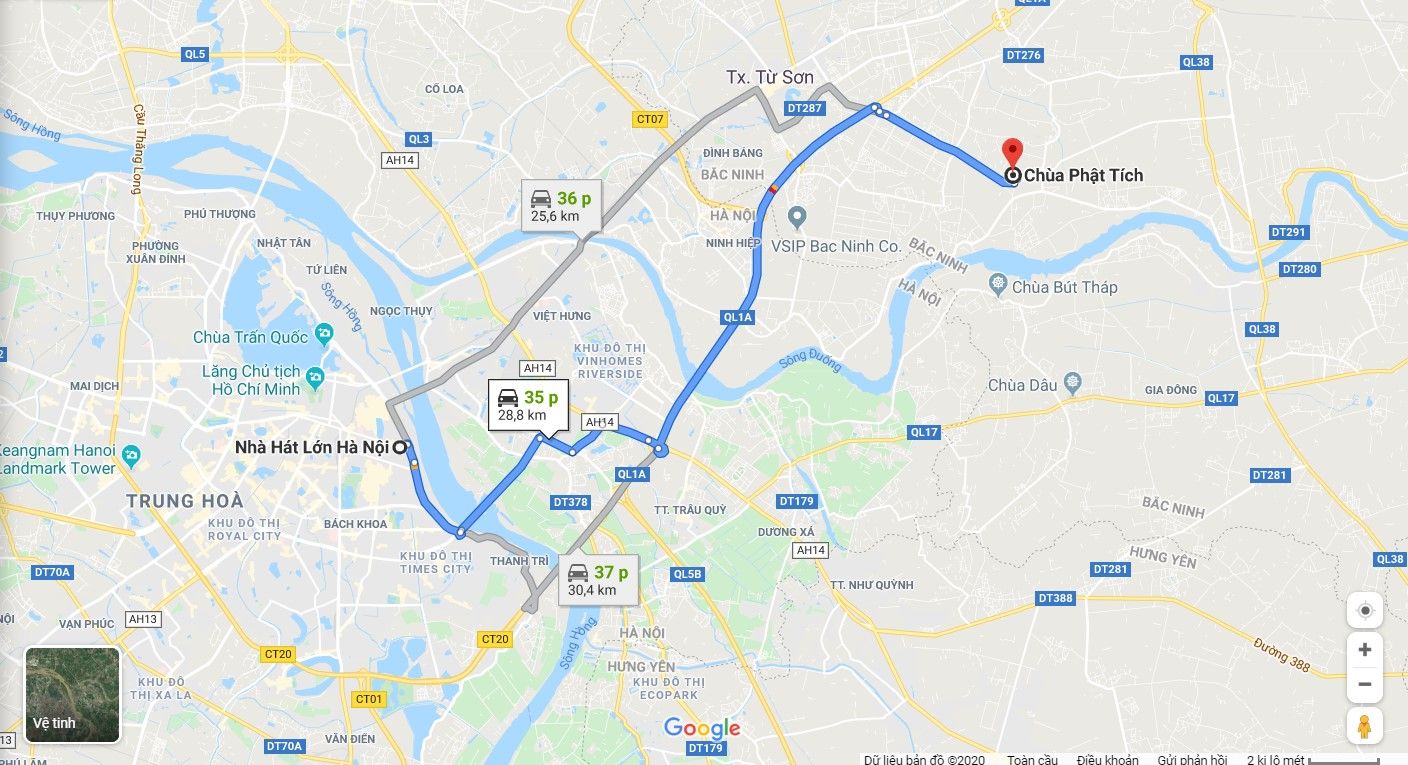