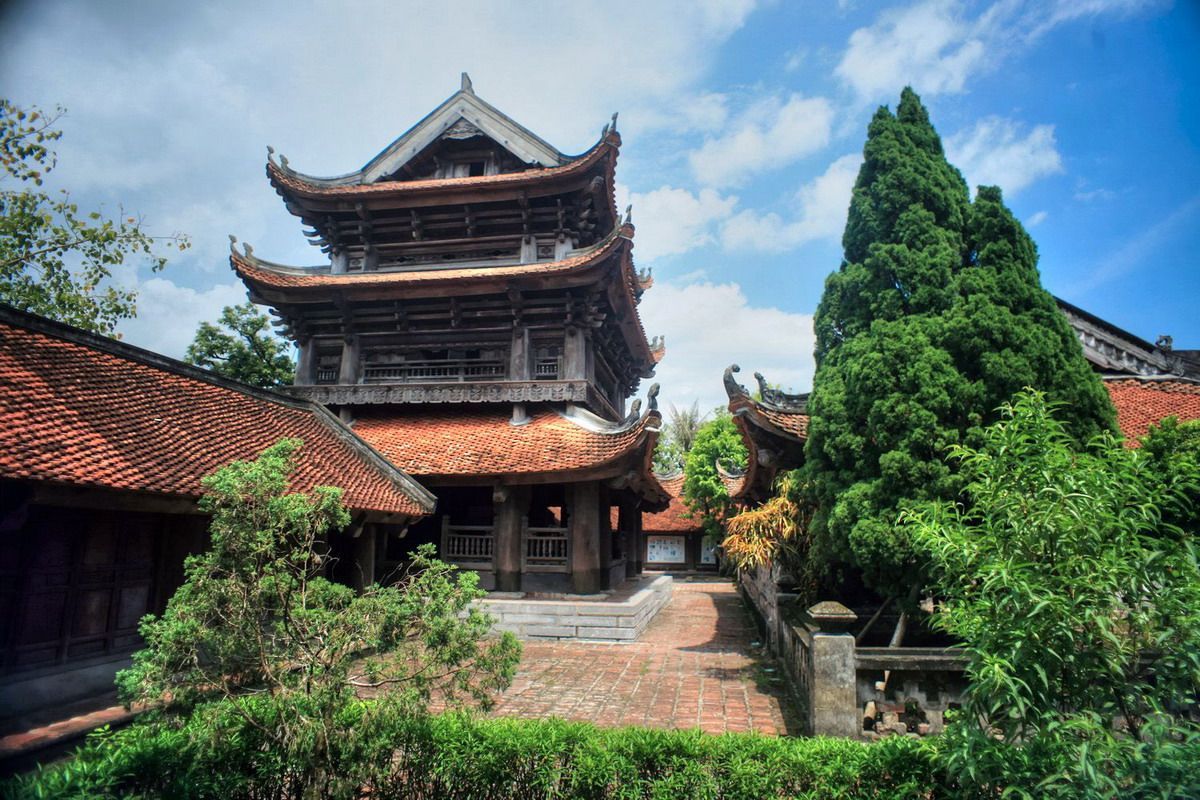 The massive scale and intact ancient features make Keo Pagoda in Thai Binh province one of the most beautiful ancient pagodas in Vietnam. In addition, this place also has unique architectural features that cannot be found anywhere else.

There are two Keo pagodas

Keo Pagoda is located in Dung Nhue village, Duy Nhat commune, Vu Thu district, Thai Binh province. Also known as Than Quang Tu, the pagoda is one of the few pagodas in Vietnam that, after hundreds of years of renovation, still retains its ancient and sacred features. Therefore, it always attracts many domestic and foreign tourists. 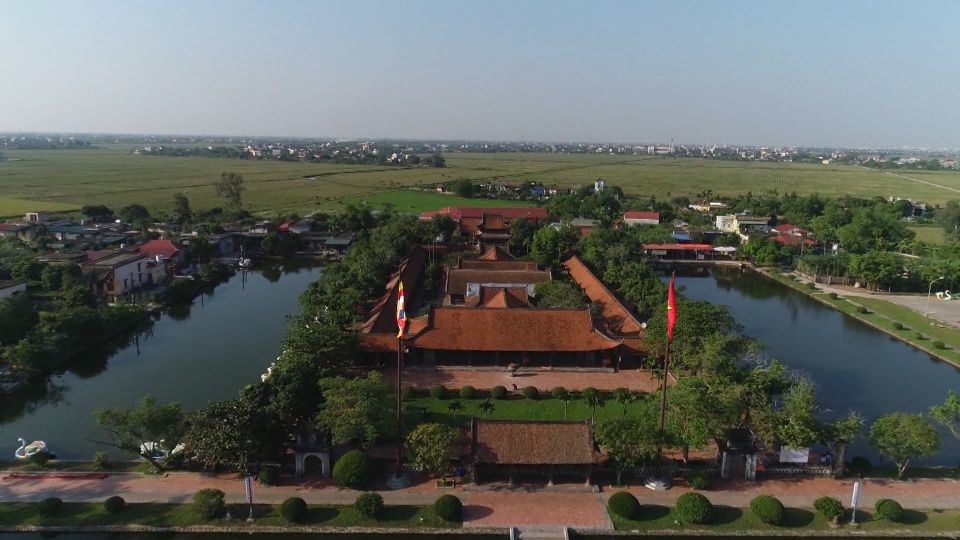 Legend has it that Keo pagoda was built in 1061 in Giao Thuy town, Ha Thanh district (now in Giao Thuy district, Nam Dinh province). The person who started the construction of the pagoda was a Zen master of the Duong family (born in 1016), whose birth name is Minh Nghiem and dharma name is Khong Lo. Due to having the merit of curing King Ly Thanh Tong's illness, he was appointed as the advisor of the Ly Dynasty. After his death, King Ly Anh Tong changed the name of the pagoda from “Nghiem Quang” to “Than Quang” to thank the merits of the Zen master. In the ancient language of Vietnam, Giao Thuy is pronounced “Keo”, leading to the current name of the pagoda.

In 1611, due to a flood from the Red River, Keo Pagoda and Giao Thuy village were submerged in water, so some people here migrated to other places to settle down and established Keo Ha pagoda - which is also known as Keo Hanh Thien - in Xuan Hong commune, Xuan Truong district, Nam Dinh province. Meanwhile, another group of residents moved to the left bank of the Red River in Thai Binh province, established Dung Nhue village and built Keo Thuong pagoda. Based on the inscription on the stele of Keo Thuong pagoda, it was built by a mandarin of the Le - Trinh dynasties (Quan Cong Hoang Nhan Dung). In November 1963, Keo Thuong pagoda was restored and inaugurated in Thai Binh.

The "unique" architecture of the Keo Pagoda in Thai Binh province 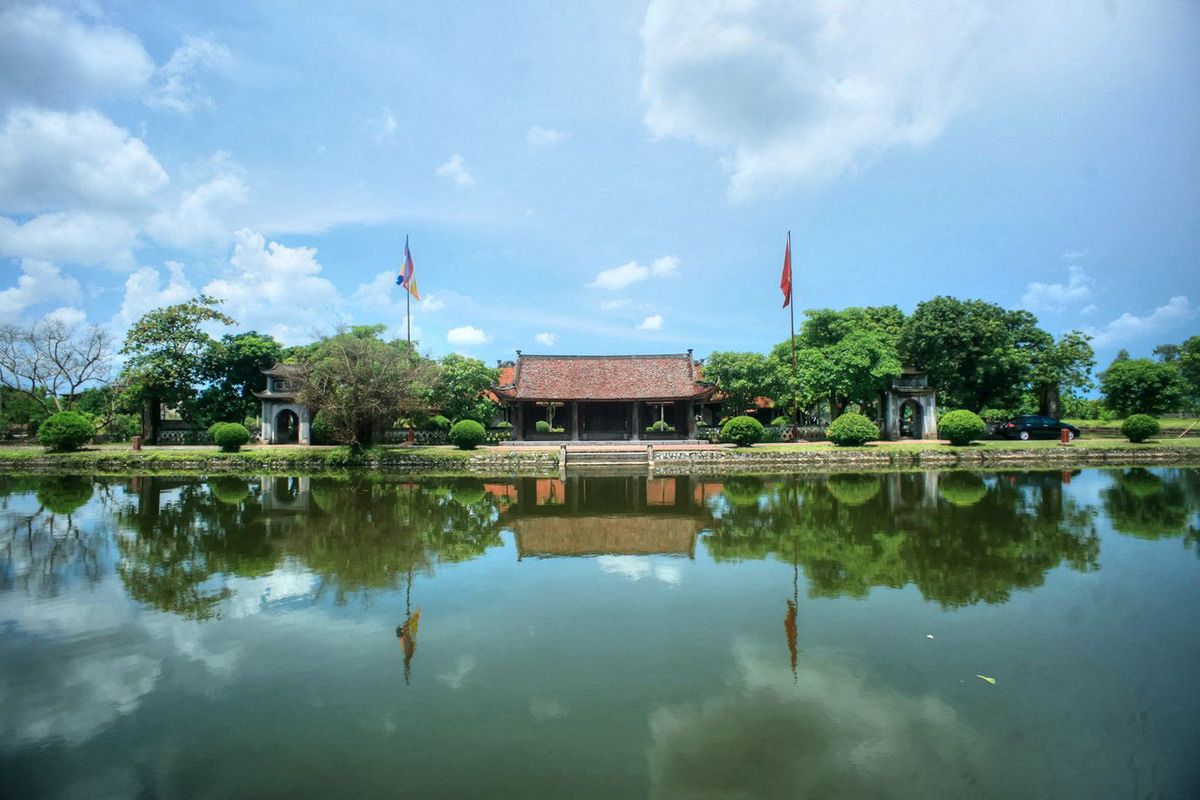 In front and on both sides of Keo Pagoda is a large lake. Photo: baophapluat.vn

Currently, the entire Keo pagoda has 17 works with 128 compartments distributed on an area of 2,022m2. From the Hong Ha II dike along the boundary of Duy Nhat commune, looking to the North, you will see the majestic Keo pagoda with many buildings in succession reflecting on the lake. Around the lake are tall luxuriant green trees, which embellish the ancient and solemn look of the pagoda.

Keo Pagoda was built in the shape of the letters “Cong” and “Quoc”. Photo: chuakeo

The architecture of Keo pagoda in Thai Binh province is in the shape of the letter “Cong” and “Quoc” - while the internal works are arranged based on the letter “Cong” (工), the outside is surrounded by a frame like the letter “Quoc” (國). Notably, these works both serve the purposes of worshiping both Buddhas and Saints. The uniqueness of Keo Pagoda lies in the design of two “Cong” letters nested in the word “Quoc” that few pagodas have. This principle has created the balance and majesty for Keo pagoda without being rigid. All the main works such as Tam Quan Gate, Buddha Shrine, Holy Temple and Steeple are almost intact from Le Trung Hung's reign. 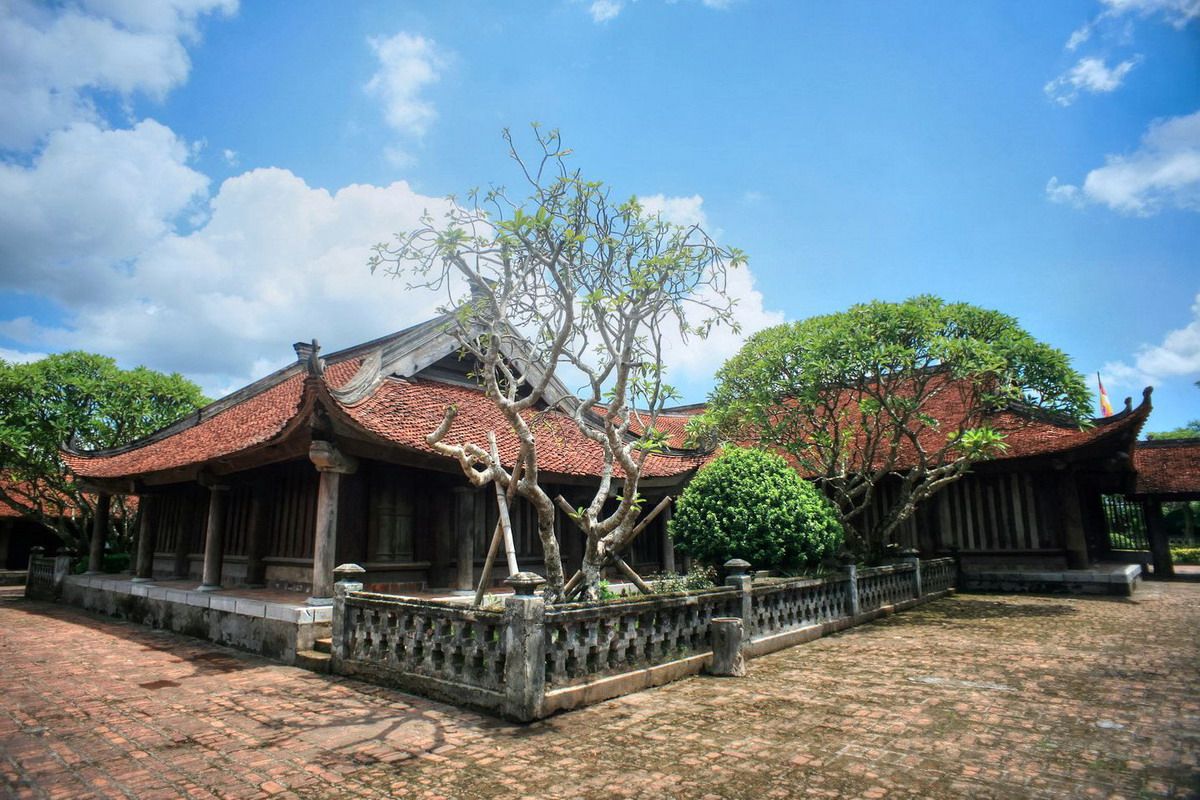 The works in Keo Pagoda are almost intact from the Le Trung Hung reign. Photo: redsvn.net

The first work which should be mentioned is the Tam Quan (Three-Door) Gate. Normally, the pagodas in Vietnam only have one gate like this, but Keo Pagoda has two, which are the outer and inner Tam Quan. The outer Tam Quan is built in the shape of a house with three main and two small compartments. Meanwhile, the inner Tam Quan has three compartments like a house with doors, pillars and porches, which represents the principle of feng shui in Buddhist architecture. The highlight of the inner Tam Quan is the door with the relief "two dragons adoring the moon" - a masterpiece of wood carving in the 17th century during the Le Trung Hung period. After passing through this gate, you will see a large yard leading to the Buddha Area, including works such as Ong Ho pagoda, Thien Huong building and Buddha Shrine. 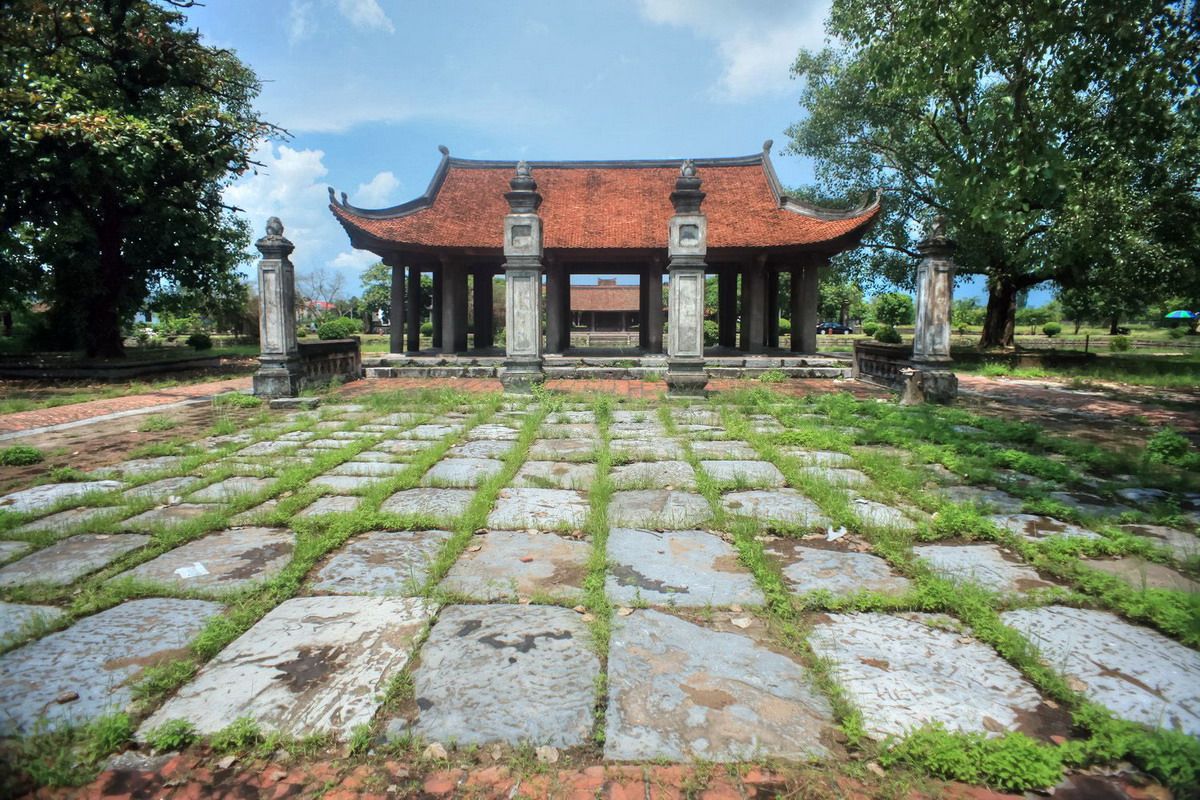 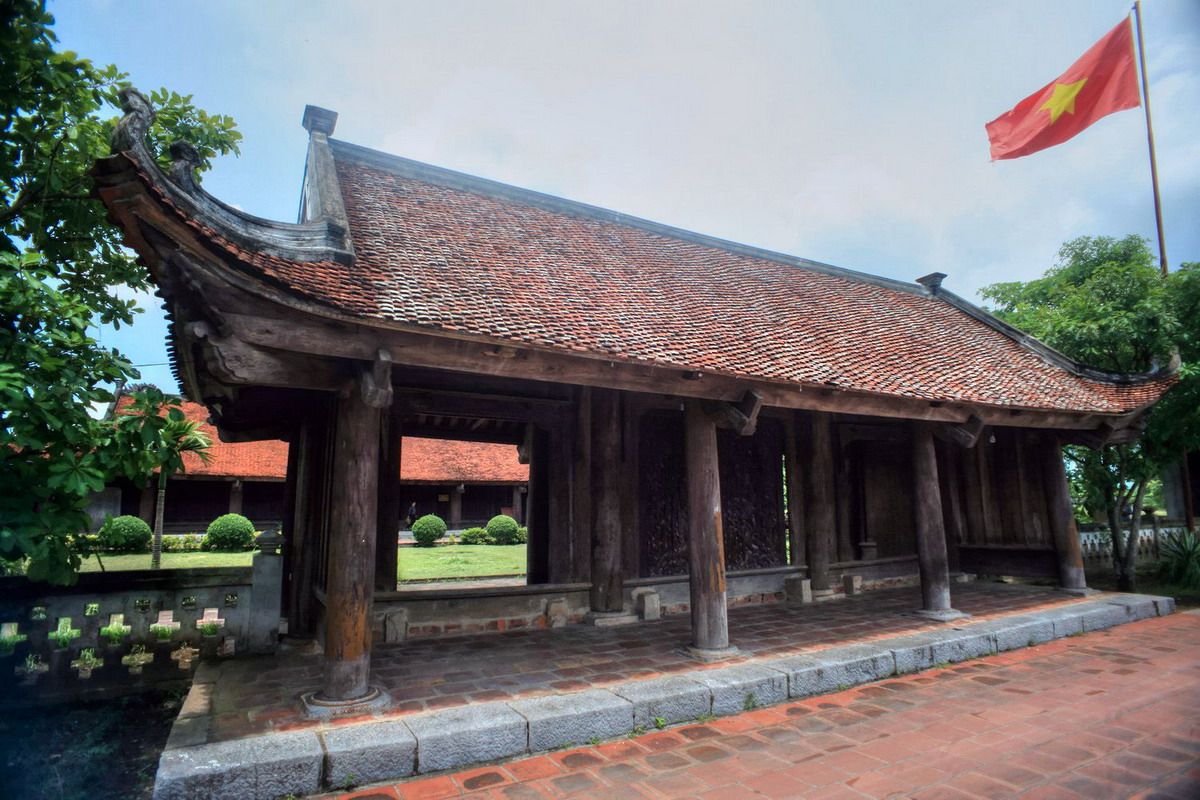 The inner Tam Quan gate has three compartments like a house with doors. Photo: redsvn 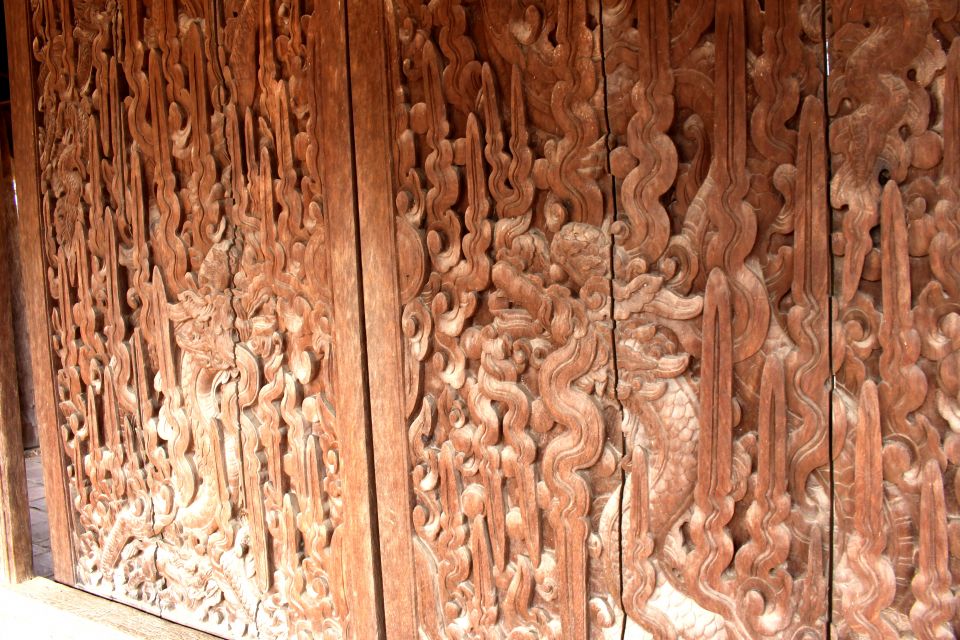 A close-up of the dragon-carved door set of the inner Tam Quan gate. Photo: Truyenhinhdulich

The Holy Temple Area is next to the Buddha Area, including buildings of Gia Roi, Thien Huong, Phuc Quoc and Thuong Dien. These works are connected to each other to form a structure of the letter "Cong" (工). Notably, the Gia Roi building is the highlight of Keo pagoda as compared to others in Northern Vietnam due to its function as a communal house - where the arbitration of people in the area takes place.

The last work of the pagoda is a three-storey steeple like a giant and majestic lotus with unique architecture.  With a height of over 11m, the steeple has a frame composed of nearly 100 overlapping corbels linked by wooden mortises and tenons, which support 12 curved tiles. The steeple of Keo pagoda has set a record as the tallest wooden steeple in Vietnam. 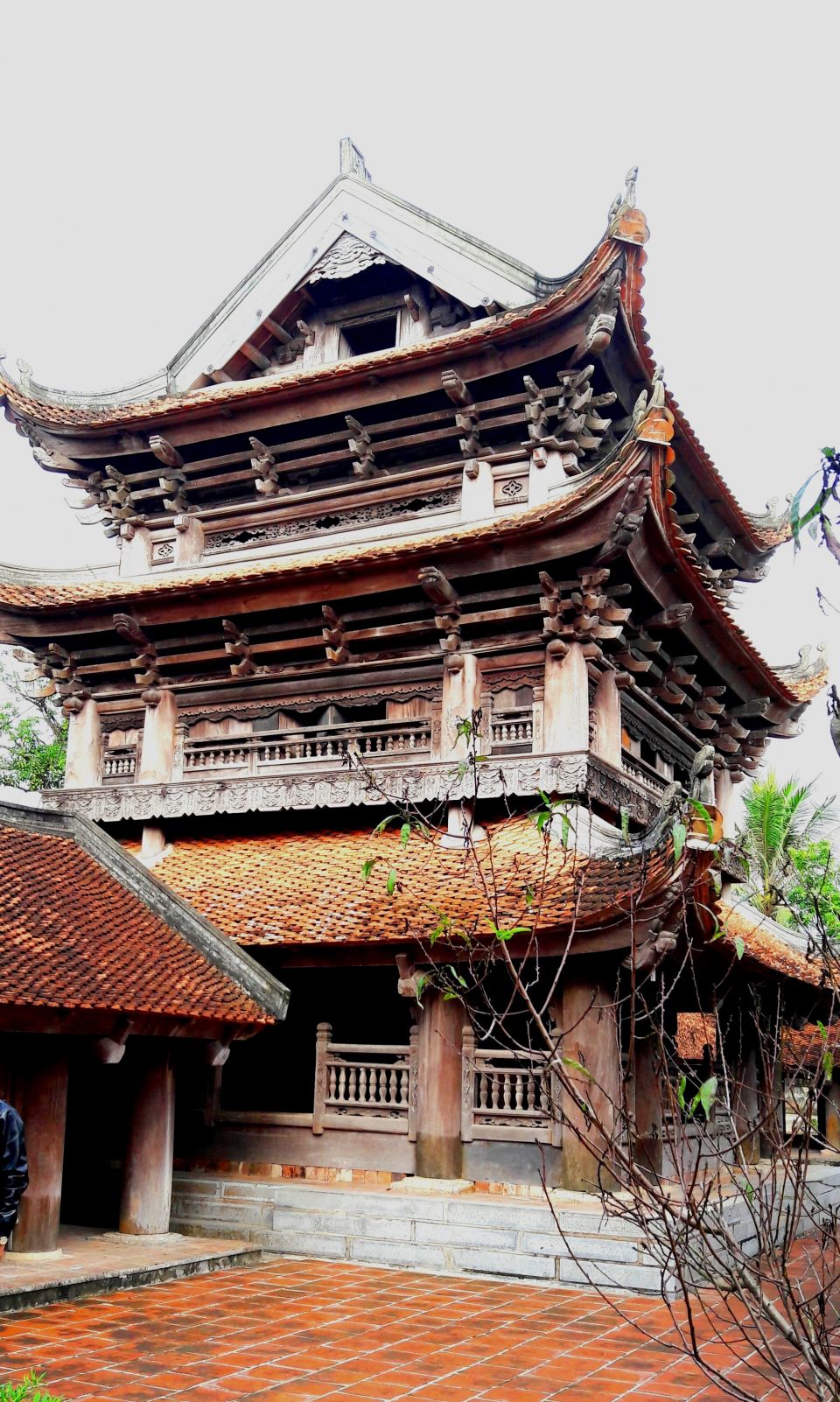 The steeple of Keo Pagoda is more than 11m high with a frame made of nearly 100 overlapping corbels. Photo: Truyenhinhdulich 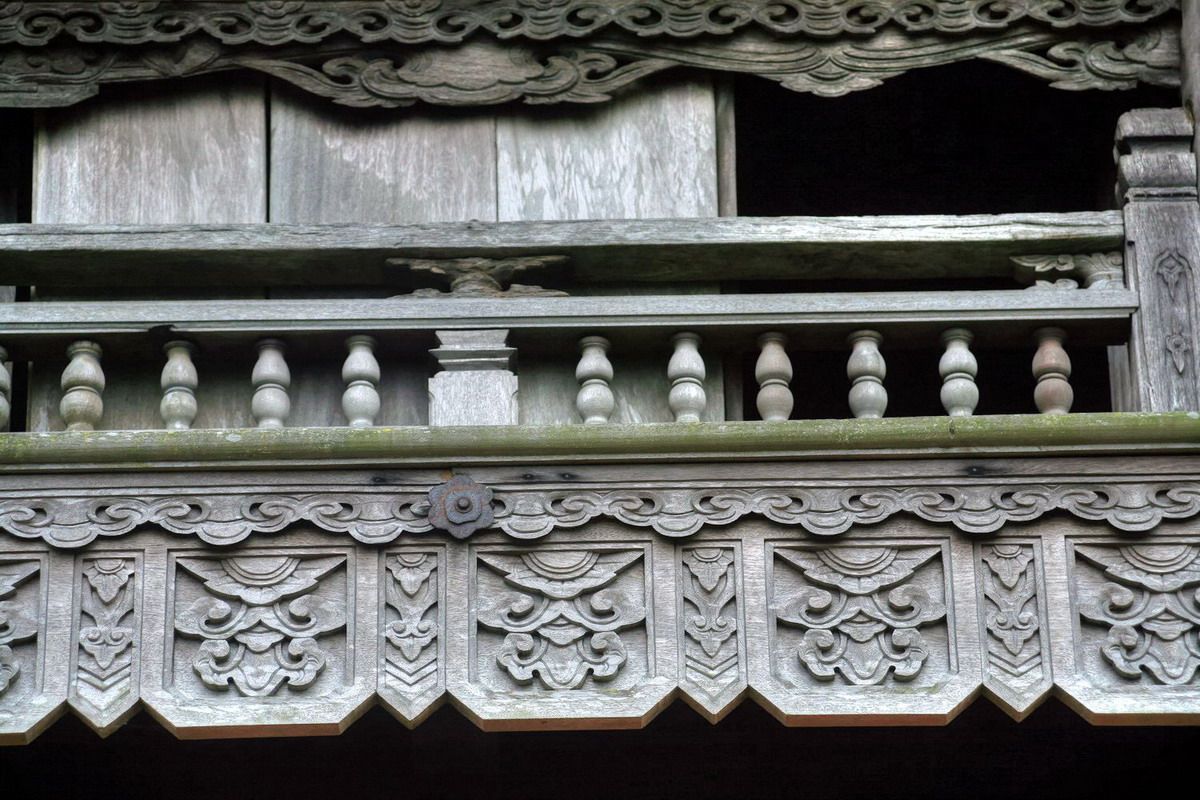 The patterns engraved on the bell tower. Photo: baomoi.com

The East and West corridors from Ong Ho pagoda to the steeple are straight and long, with dozens of compartments covering the whole pagoda area, forming "four discreet enclosure walls" of the architecture worshiping both Buddhas and Saints. Notably, the whole pagoda is made of ironwood, and it utilises solid wooden mortises and tenons rather than rivets. The mortise system at Keo pagoda is also "unique" as it groups six mortises and tenons to form beams of vertical and horizontal directions for reinforcement. The whole building is made up of more than 300 such groups, so it is very solid without using a single rivet. The supporting pillars and trusses were meticulously made through the skillful hands of artisans of the later Le period. 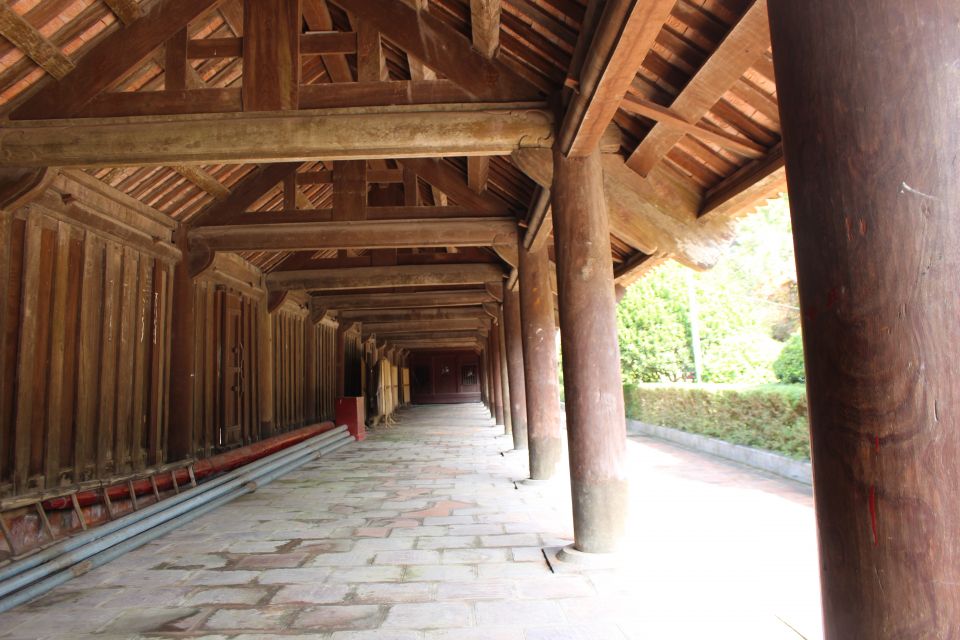 The pagoda is made entirely of solid ironwood. Photo: Truyenhinhdulich.vn 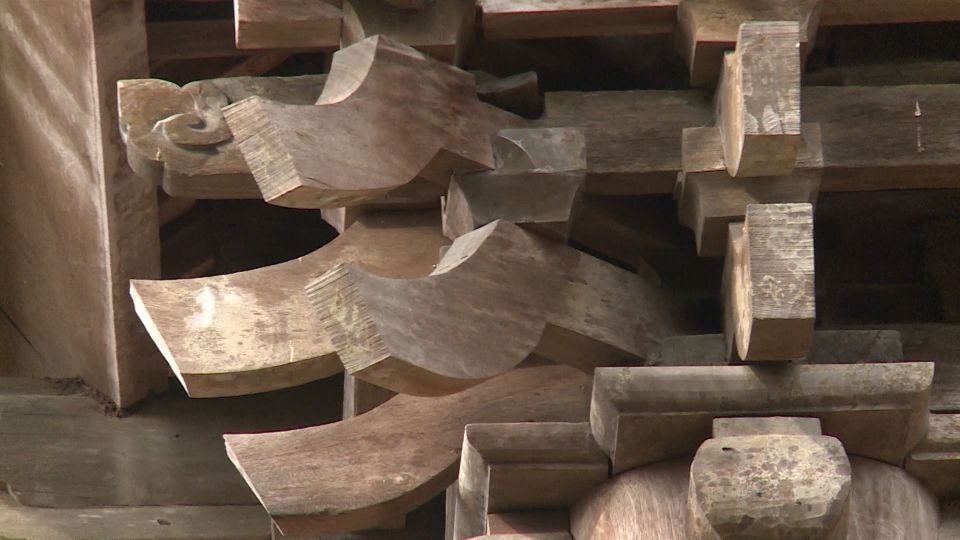 The mortise system at Keo pagoda is also "unique" as it groups six mortises and tenons to form beams of vertical and horizontal directions for reinforcement. Photo: redsvn 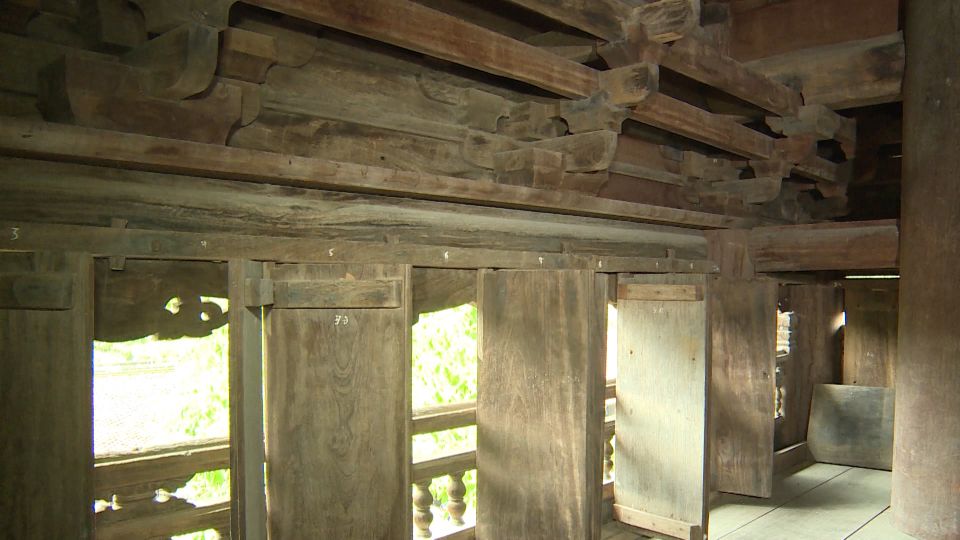 The solid truss system in the pagoda. Photo: Truyenhinhdulich.vn 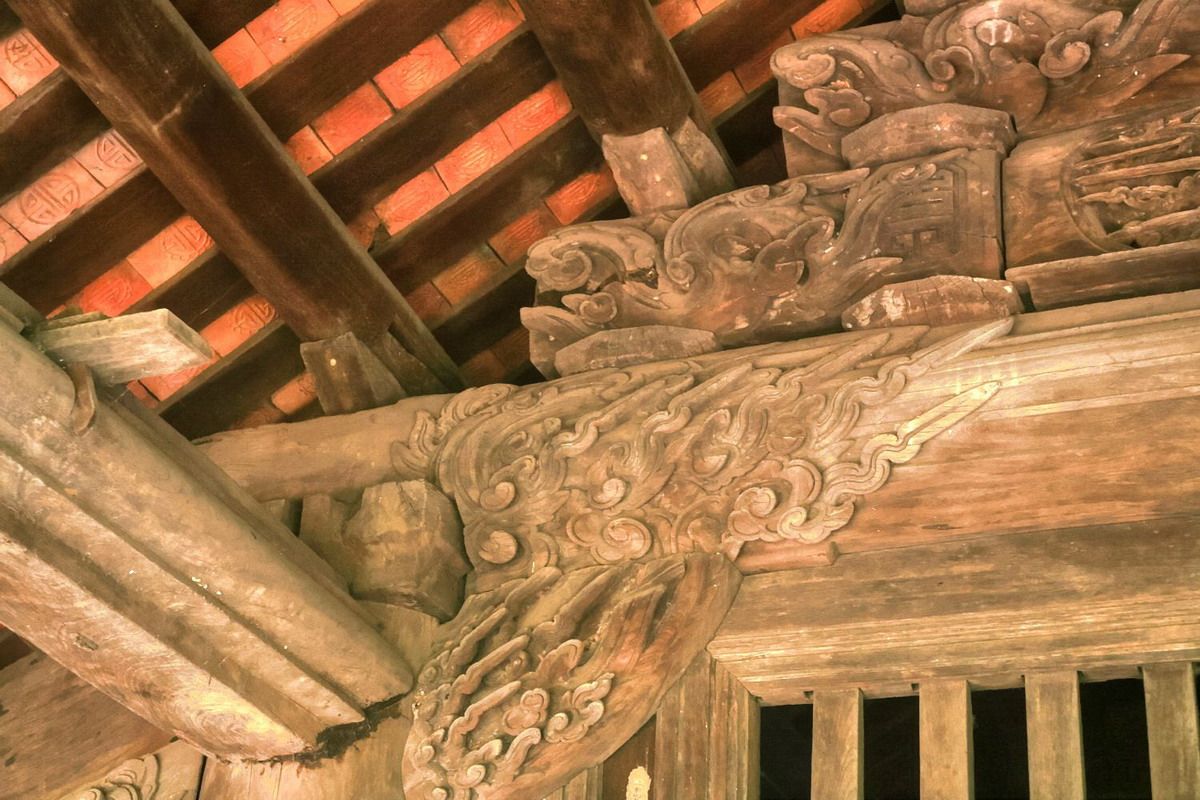 The patterns on the wooden frame of the pagoda. Photo: redsvn.net

Among the ancient pagodas in Vietnam, Keo is one of the pagodas with the most complete system of dharma statues, which shows the artistic value of the 17th and 18th centuries through the statues of Tuyet Son, Arhat and Bodhisattva Guan Yin. Notably, there is an area that clearly shows the Three Times of Buddhism - Buddhas of the past, present and future. In addition to the dharma statue, there are also many valuable antiques such as the lamp base of the Mac Dynasty, ceramics of the Le Dynasty, Long Dinh dragon boat, Buddha Altar, and incense burners of the Le Dynasty, all of which are approximately 400 years old. 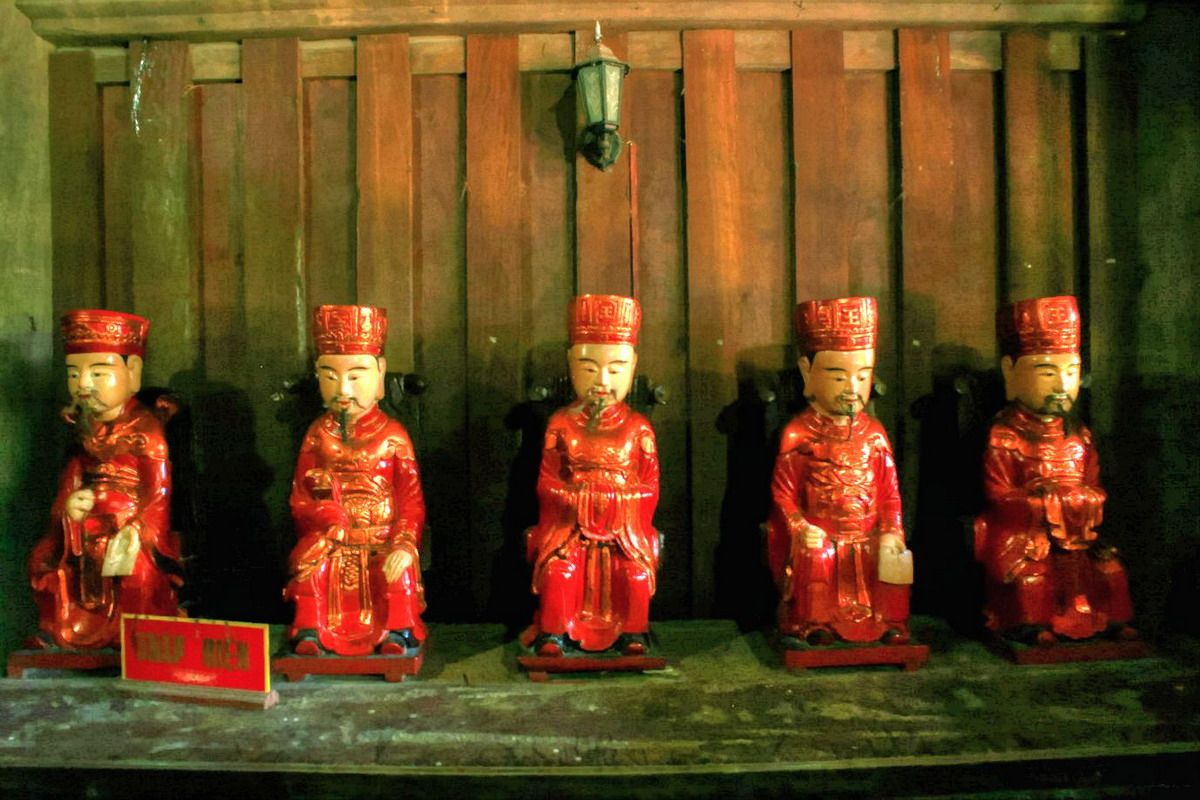 With unique historical, cultural and architectural values, Keo Pagoda is recognised as a "special national monument".

Annually, there are two festivals in Keo Pagoda that attract many Buddhists. The Spring Festival takes place on the 4th day of the first lunar month (in about February of the solar calendar) with many interesting and unique folk games. 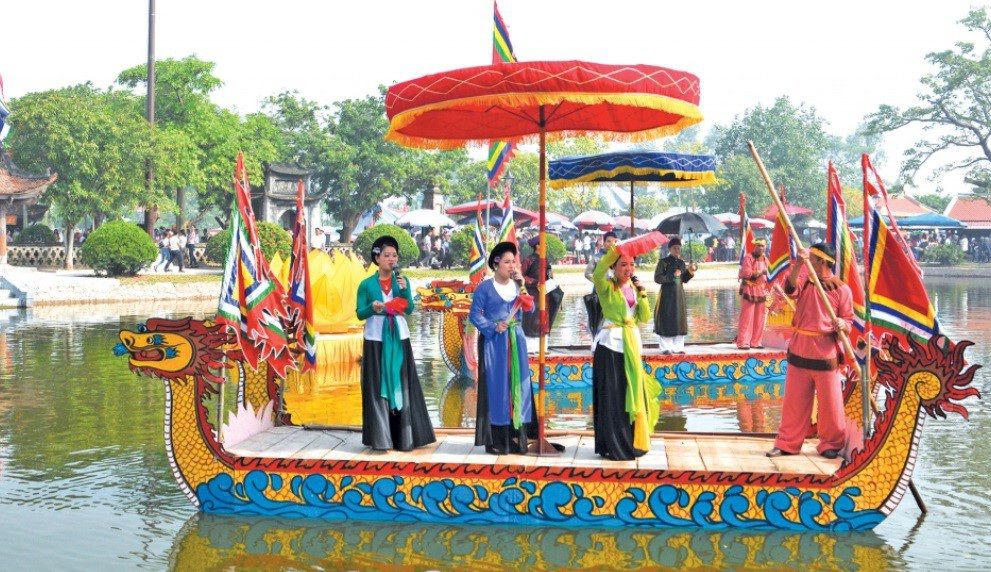 The traditional festival with lots of unique games. Photo: baophapluat.vn

The festival of Keo Pagoda attracts many tourists. Photo: luhanhvietnam.com.vn

The Autumn Festival takes place on September 13th-15th of the lunar calendar (around October of the solar calendar), featuring historical values associated with the life of Zen master Khong Lo. In addition to the rituals and palanquin processions, the festival also has a swimming contest on the river and frog dance. The Keo pagoda festival was recognized as a national intangible cultural heritage site in 2017. 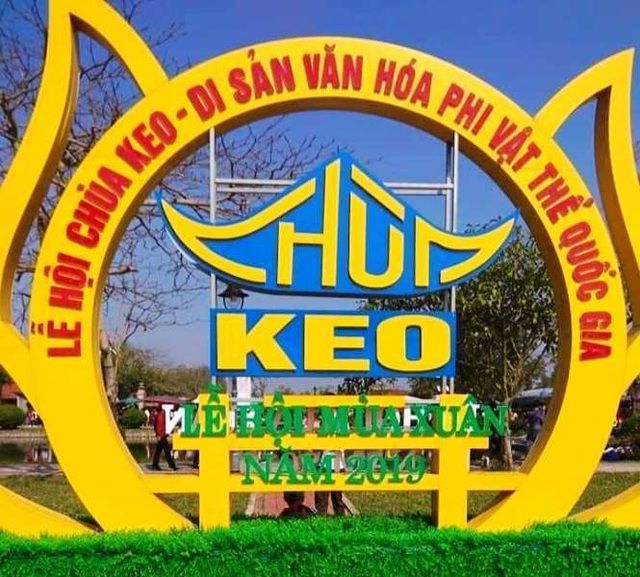 Keo Pagoda in Thai Binh province is not only an ancient pagoda with unique architecture, but it also preserves the typical artistic and aesthetic values of the later Le Dynasty. This is a destination worth visiting when you come to Thai Binh province.