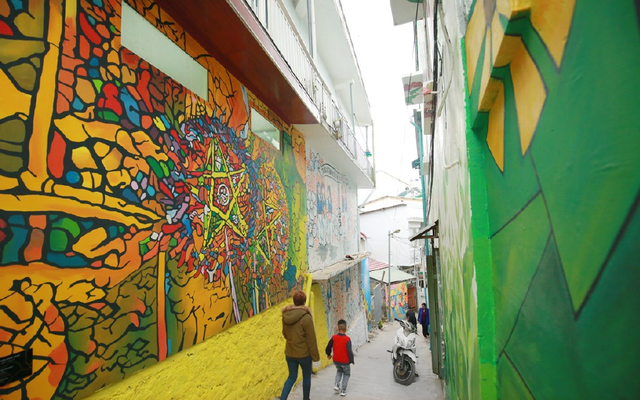 Da Lat is famous for being a peaceful and poetic city with colourful flower gardens, green pine hills and ancient mossy villas, however, there is a slope called Nha Lang which attracts many visitors thanks to its unique frescoes.

The origin of the name “Nha Lang” slope

Nha Lang slope is located in Ward 1, connecting Phan Dinh Phung and Truong Cong Dinh streets in the center of Da Lat city. Constructed more than half a decade ago, Nha Lang slope has been a part of the lives of many people living in “the city of thousands of flowers”. 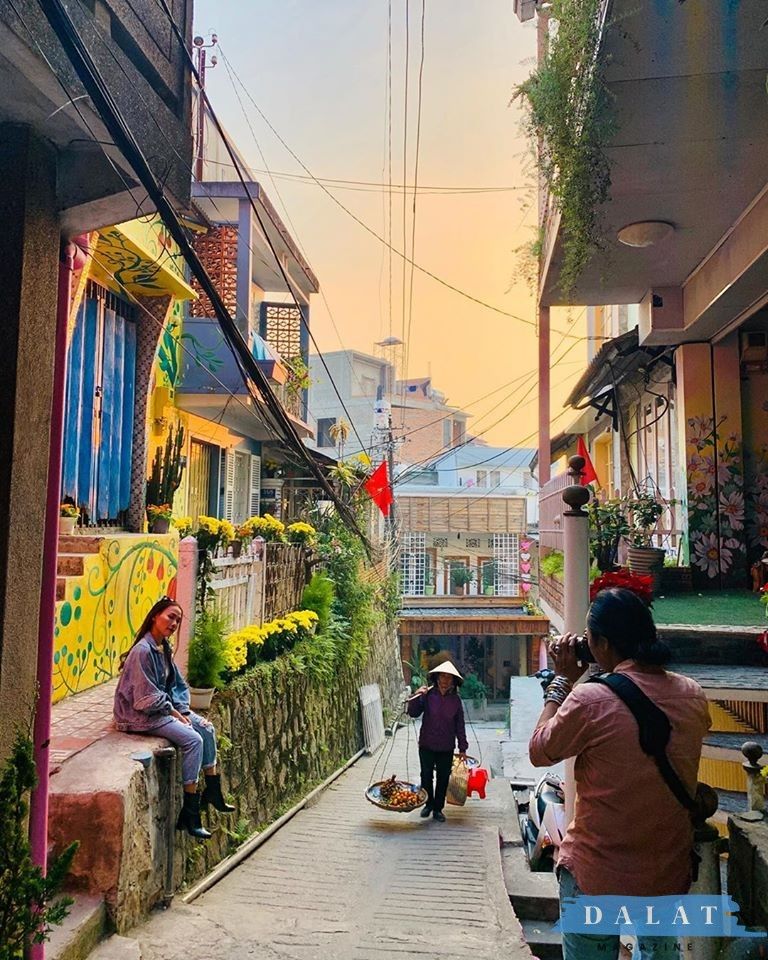 Regarding the name Nha Lang (Communal House), during the French colonial period,there was a communal house which was used as meeting places for dignitaries and villagers to discuss village and country affairs. At that time, Nha Lang slope was a familiar shortcut for Da Lat people, from Nguyen Van Troi Street to the center of Hoa Binh area. In 1953, it was renamed “Nguyen Bieu Street'', but as the locals were familiar with the old name, it was still called “Nha Lang slope”.

The uniqueness and attraction of Nha Lang Slope

With a length of only about 200m, through many ups and downs of history, Nha Lang slope has become a part of the memory, love and culture of the people of the “dreamland” Da Lat. The slope is embellished by ancient houses and stone steps. Despite “nestling” by the poetic pine hills, Nha Lang slope has a very unique, idyllic yet romantic beauty. 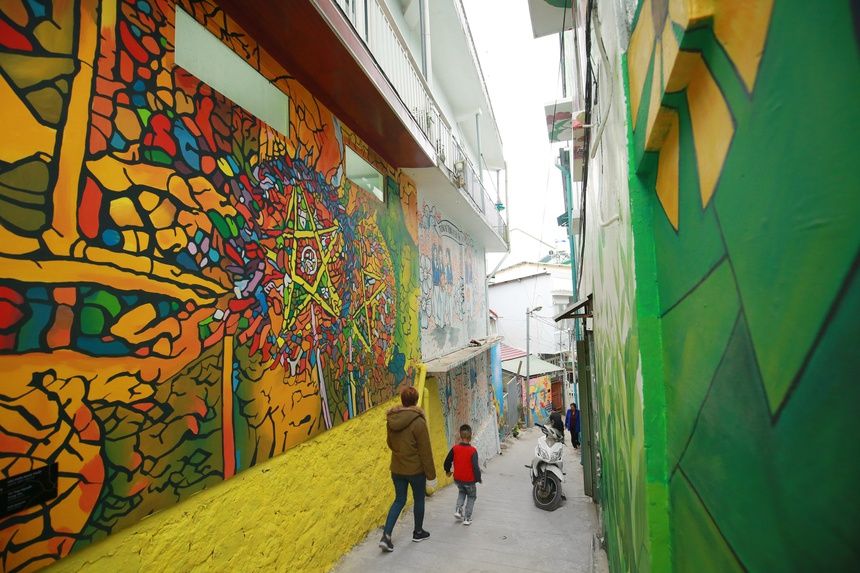 The ancient and mossy Nha Lang slope was chosen to implement the project "Street of the Hill" with vivid frescoes. Photo: Zing News

The slope in Da Lat is famous for its colourful murals. Photo: kenh14

At the end of 2019, Nha Lang slope was selected to implement the project "Street on the Hill" to welcome "Da Lat Flower Festival 2020" and the New Year of the Rat. This idea derived from a non-profit art organization. People have set up a multi-form and multi-coloured public art space on this slope with frescoes on the walls, balconies, windows and talus. The content of the murals is to tell the story of beautiful Da Lat through flowers, dreamy scenes of mist, mountains, hills and people associated with this land. The most prominent are murals of wild sunflowers, roses, mimosa, orchids, cherry blossoms, apricots and hydrangeas - which are all the typical flowers of “the city of thousands of flowers”. In addition, the slope also has the image of doctor Alexandre Yersin (1863-1943) - who discovered Lam Vien plateau during his expedition in 1893, opening a new “chapter” for this land. Da Lat today. There are also pictures of the girls wearing Ao Dai (the national costume of Vietnam for women) at Bui Thi Xuan High School - the first high school for girls in the Central Highlands of Vietnam. 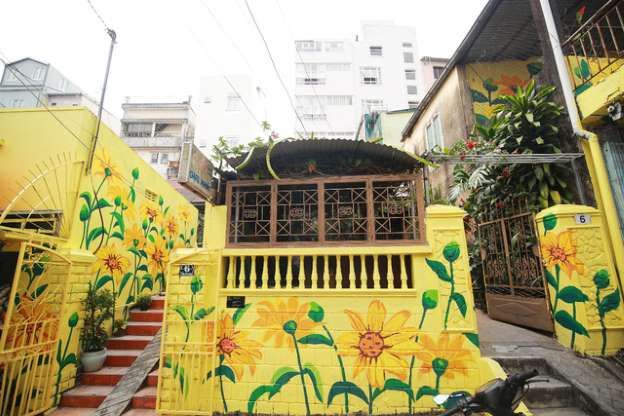 The image of wild sunflowers - the typical flower of Da Lat city - is presented on the walls of Nha Lang Slope. Photo: msn.com 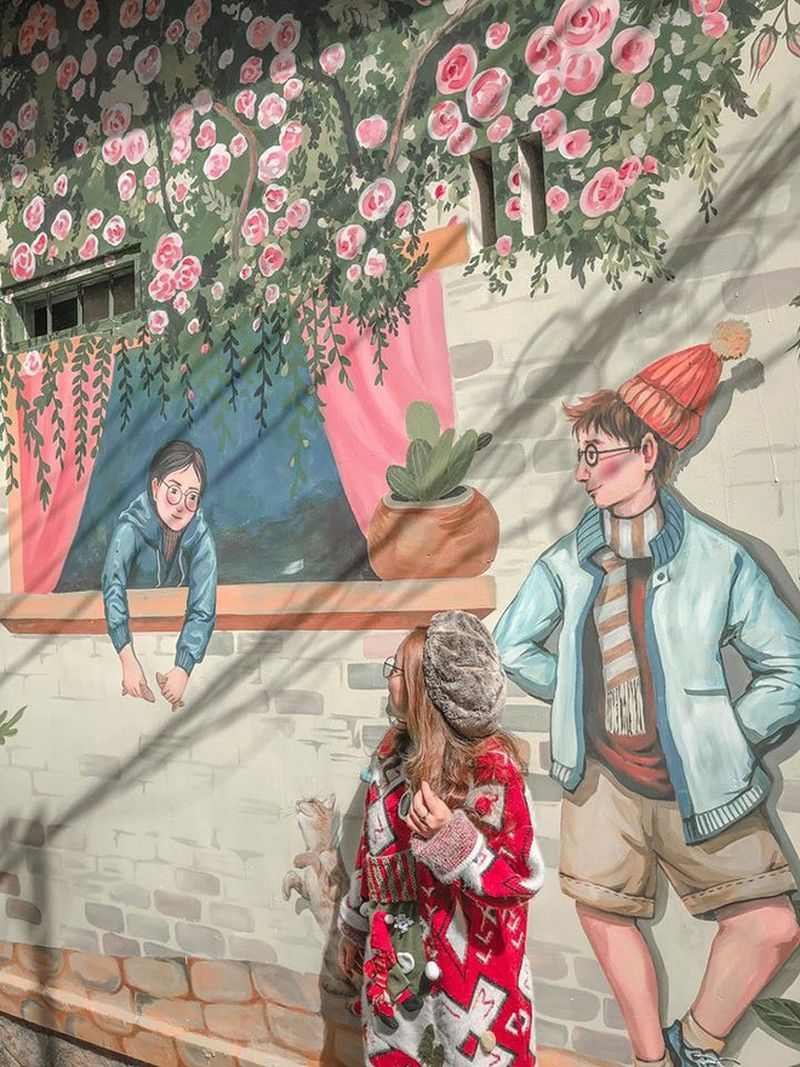 The romantic fresco of rose and door frame. Photo: kienthuc.vn 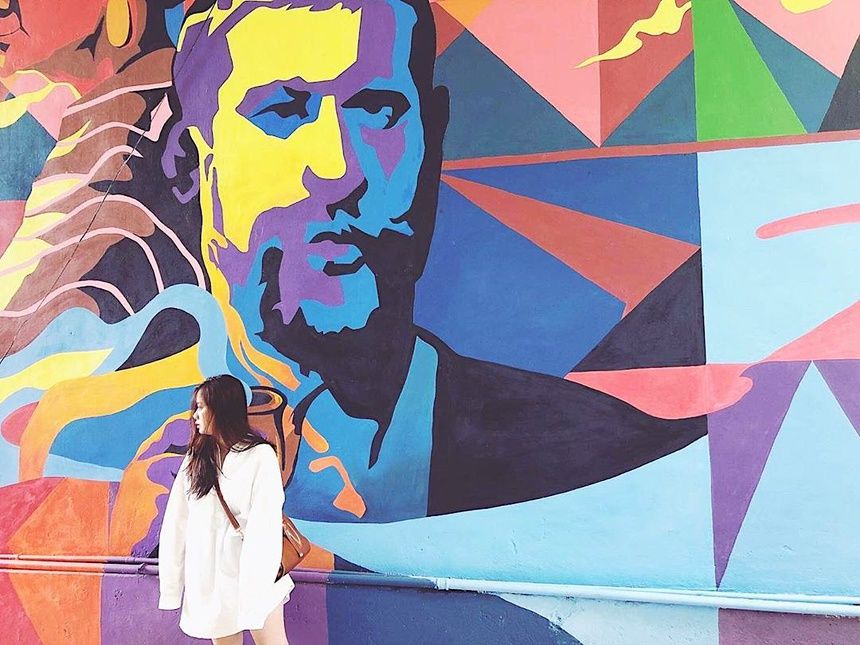 The image of Dr. Alexandre Yersin, who discovered Lam Vien plateau during his expedition in 1893. Photo: Zing News 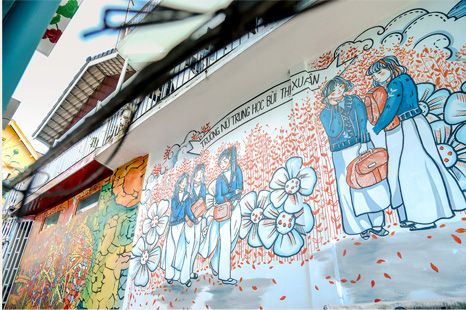 From an ancient slope that is somewhat bleak, Nha Lang has "put on a new shirt” with a series of colourful and lively frescoes. With bright and gorgeous colours which are in harmony with the scenery and existing architecture of the slope, the meticulously painted frescoes have made Nha Lang Slope an attractive place to tourists. The art space here is considered “the first outdoor exhibition” in Vietnam. 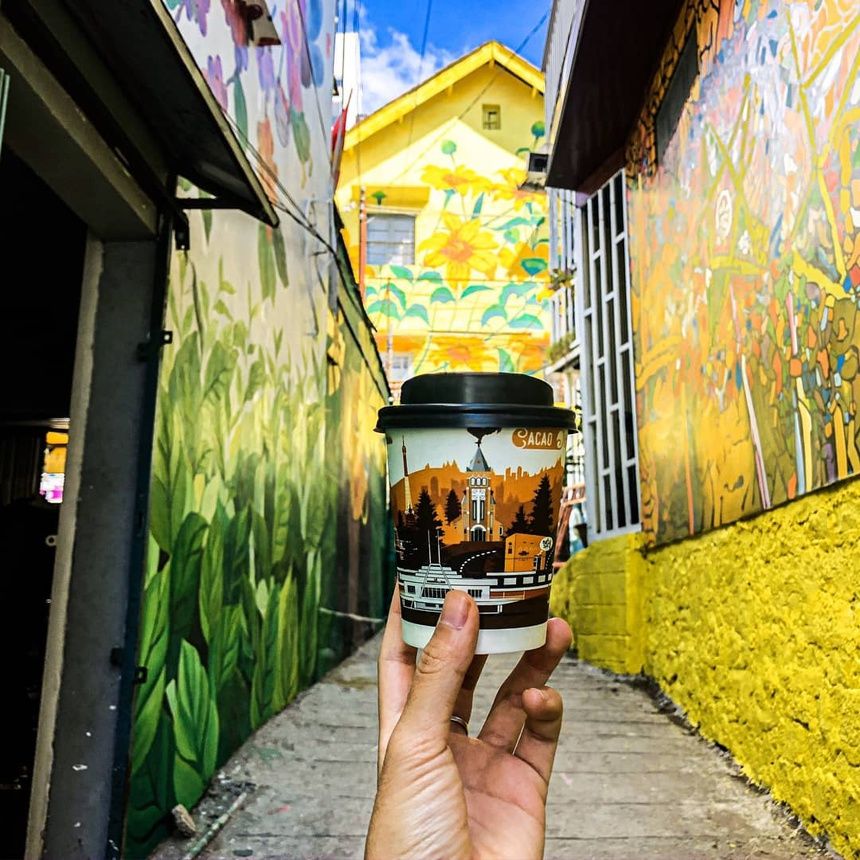 Each picture is an array of colours- a different message about “the city of thousands of flowers”. Photo: kenh14

When coming to Nha Lang slope, not only can you admire vivid frescoes, but also have the opportunity to immerse yourself in the life of the people here. Da Lat is famous for being peaceful, but the atmosphere on the slope is always bustling. In the morning, there is the sound of people making breakfast and the aroma from restaurants with typical dishes like noodle soup (Hu Tieu) and “Can” cake. At noon, many coffee shops, clothing stores, and tailor shops open - the slope now seems to “wake up” in the sun when the locals are busy with their work. 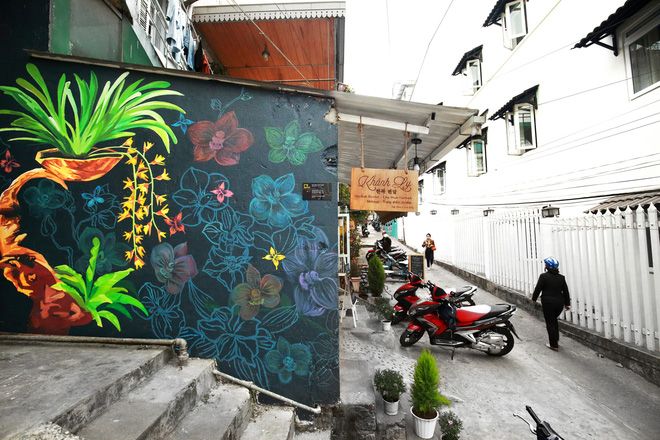 Nha Lang slope is bustling with many shops and restaurants. Photo: kenh14 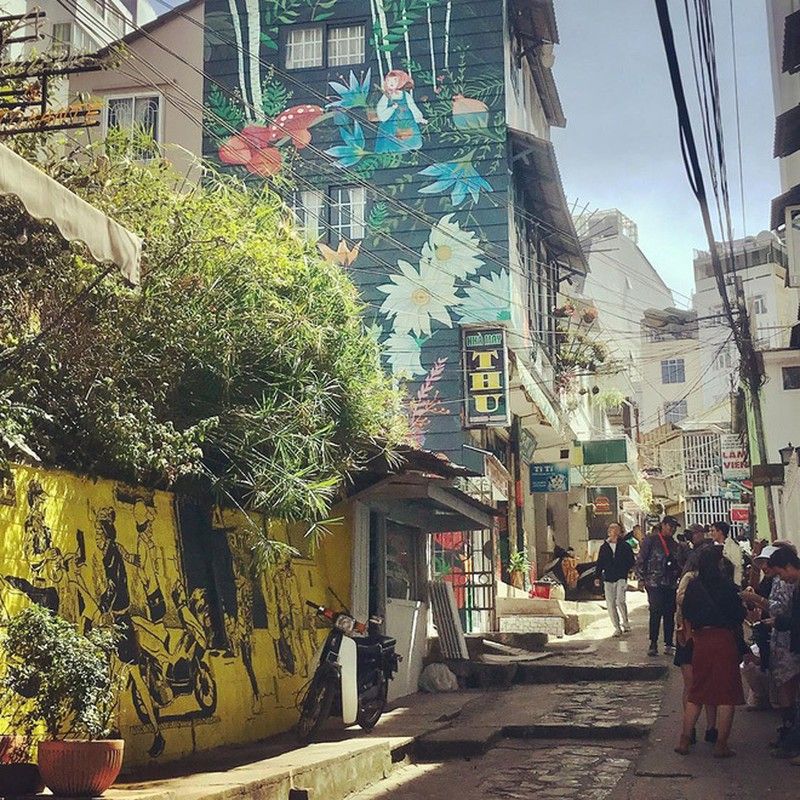 Da Lat is not only idyllic and ancient, but it also has a different colourful space in the Nha Lang slope. When coming here, you can both admire a series of frescoes depicting images associated with “the city of thousands of flowers'', and - at the same time - be immersed in the typical bustling life of the people on this slope.