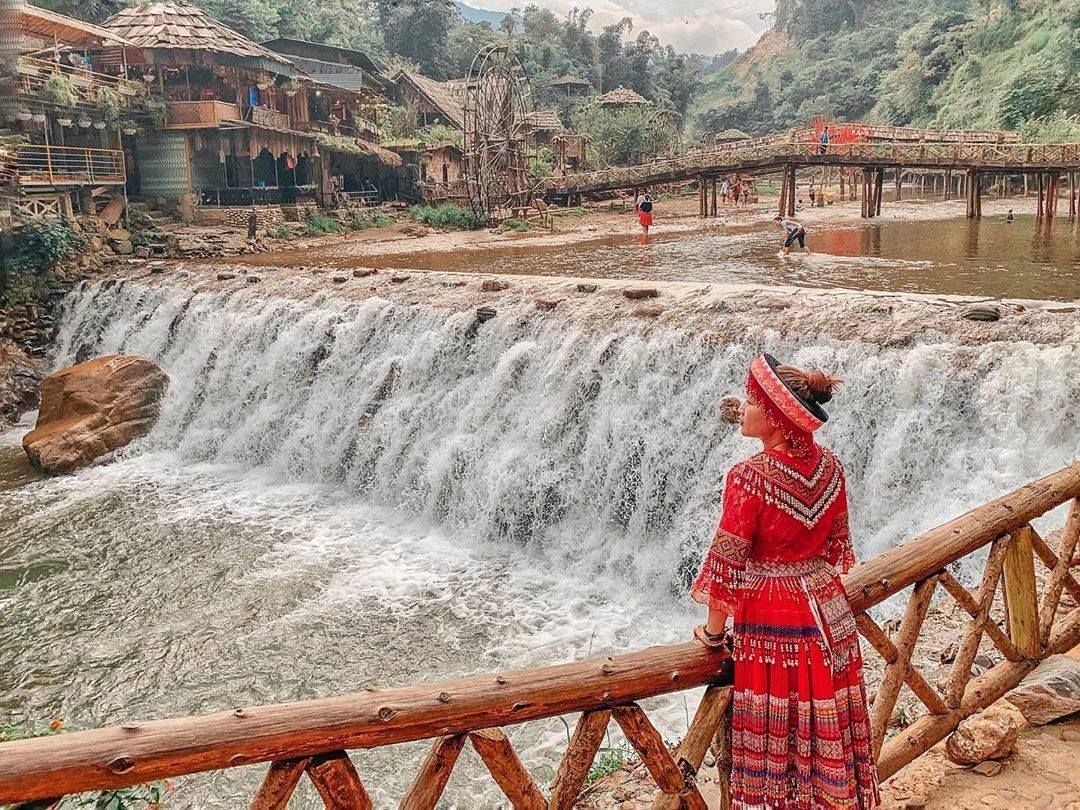 Sa Pa is a city with typical features of the Northwest mountains of Vietnam. When coming here, you can not only discover its natural beauty, but also have the opportunity to learn about the cultural traditions of the highland ethnic groups.

Ham Rong Mountain, which is located right next to the center of Sapa town, is a part of the majestic Hoang Lien Son range. In Vietnamese, “Ham Rong” means “the jaw of a dragon” and this is also its shape. Ham Rong is one of the few mountains with clear and beautiful figurative features in Vietnam. 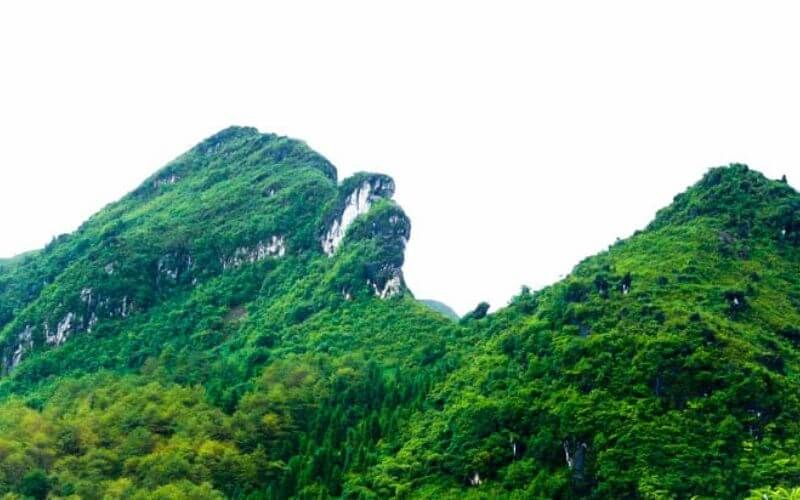 This place is associated with a legend that in ancient times, there was a great flood here, but a couple of dragons still entwined with each other without knowing anything. When they realized the disaster, the flood had hit the place and they could not fly, causing the couple to be separated. The female dragon was petrified in the shape of looking up to the sky in the direction of the male dragon flying to the West of Hoang Lien Son range. The dragon's tail rests on the Heaven Gate (bordering Hau Thao commune and Sa Pa ward), while the dragon's head is Ham Rong mountain today. 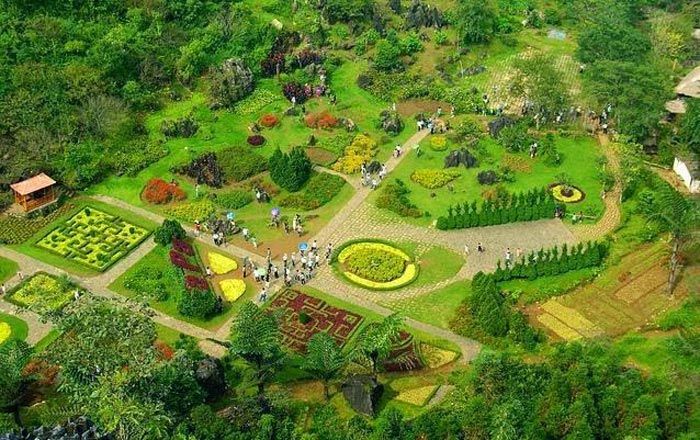 Ham Rong Mountain is a part of Ham Rong Sapa tourist area, which covers an area of 148ha and was built in 1996 to exploit its beautiful unspoiled nature. Some outstanding works of this tourist area are: Orchid Garden (with over 200 species), Paach Garden, Sa Pa Telecommunications Station, Cloud Yard and Heaven Gate. Notably, standing on the Cloud Yard, you will be able to admire the floating sea of clouds as charming as those from a fairyland. When coming here in the early morning, the misty atmosphere with clouds spreading all over the space will create an impressive scene. 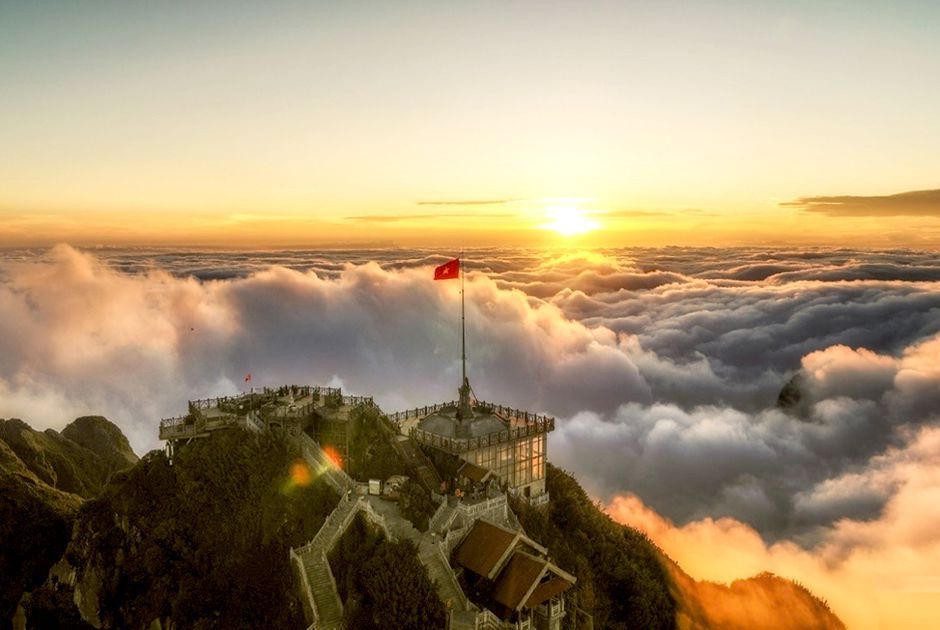 The Cloud Yard with the fanciful sea of clouds. Photo: yeudulich

Muong Hoa valley is located in Hau Thao commune, Muong Hoa district, about 8km from the southeast of Sapa town and is also the residence of many ethnic minorities such as H'Mong, Ta Van, Dao, Tay and Giay. To get to this valley, you have to come through a pass located along a high mountain range with many steep slopes. 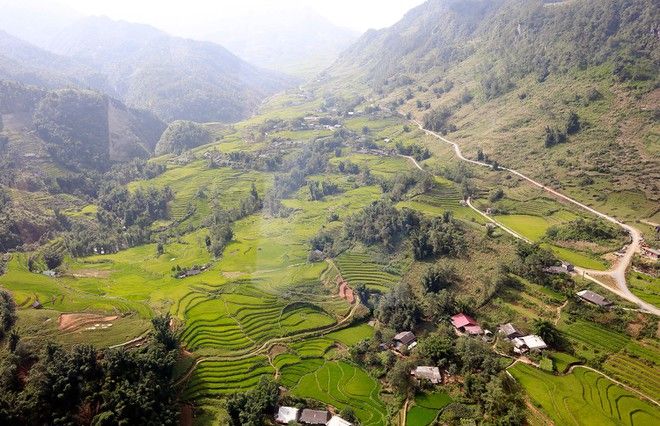 Muong Hoa is famous for having the most beautiful terraced fields in Sapa - which “curve” along the hillsides, creating an impressive image of an inclined pan. In addition, this valley has an ancient rock field consisting of nearly 200 stone blocks stretching over an area of about 8km2. The special thing is that on these rocks, there are many mysterious drawings with cultural significance of primitive times that scientists still have not discovered. Another place not to be missed when you come here is the Hoa stream, which stretches along the valley with a length of about 15km like a strip of soft silk, creating a highlight for this place. In the ripe rice season, the rice fields and the clear blue sky reflect on the stream, forming a charming picture of nature. 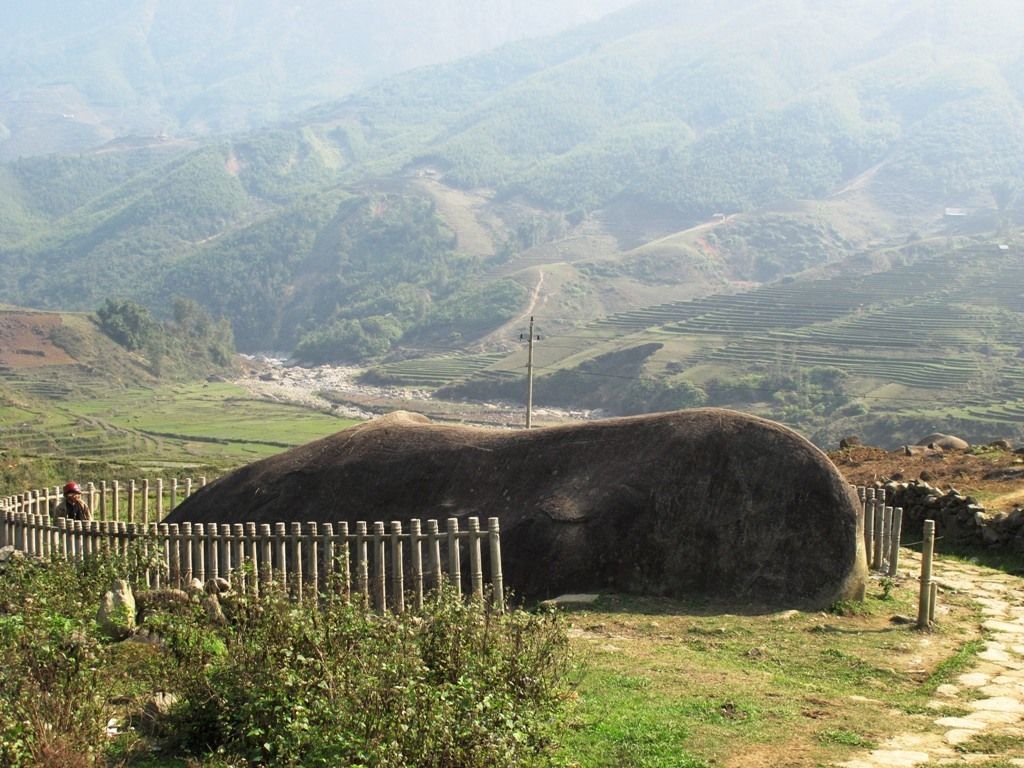 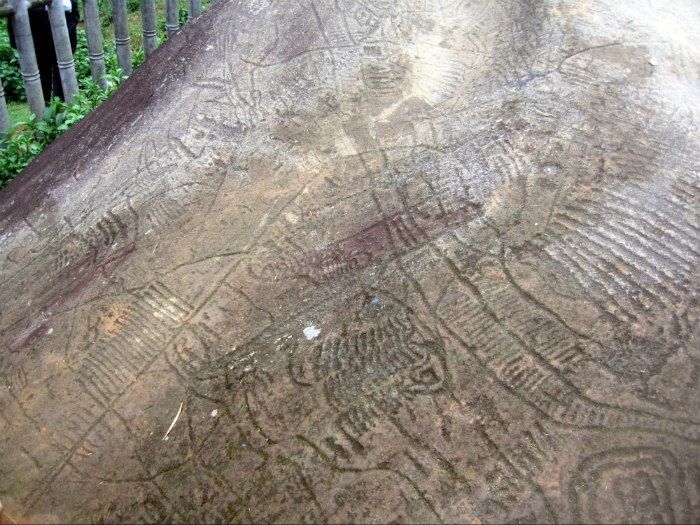 The village is about 12km to the northeast of Sapa town and about 1km from the People's Committee of Ta Phin Commune. This is the residence of the Dao and H'mong ethnic groups. 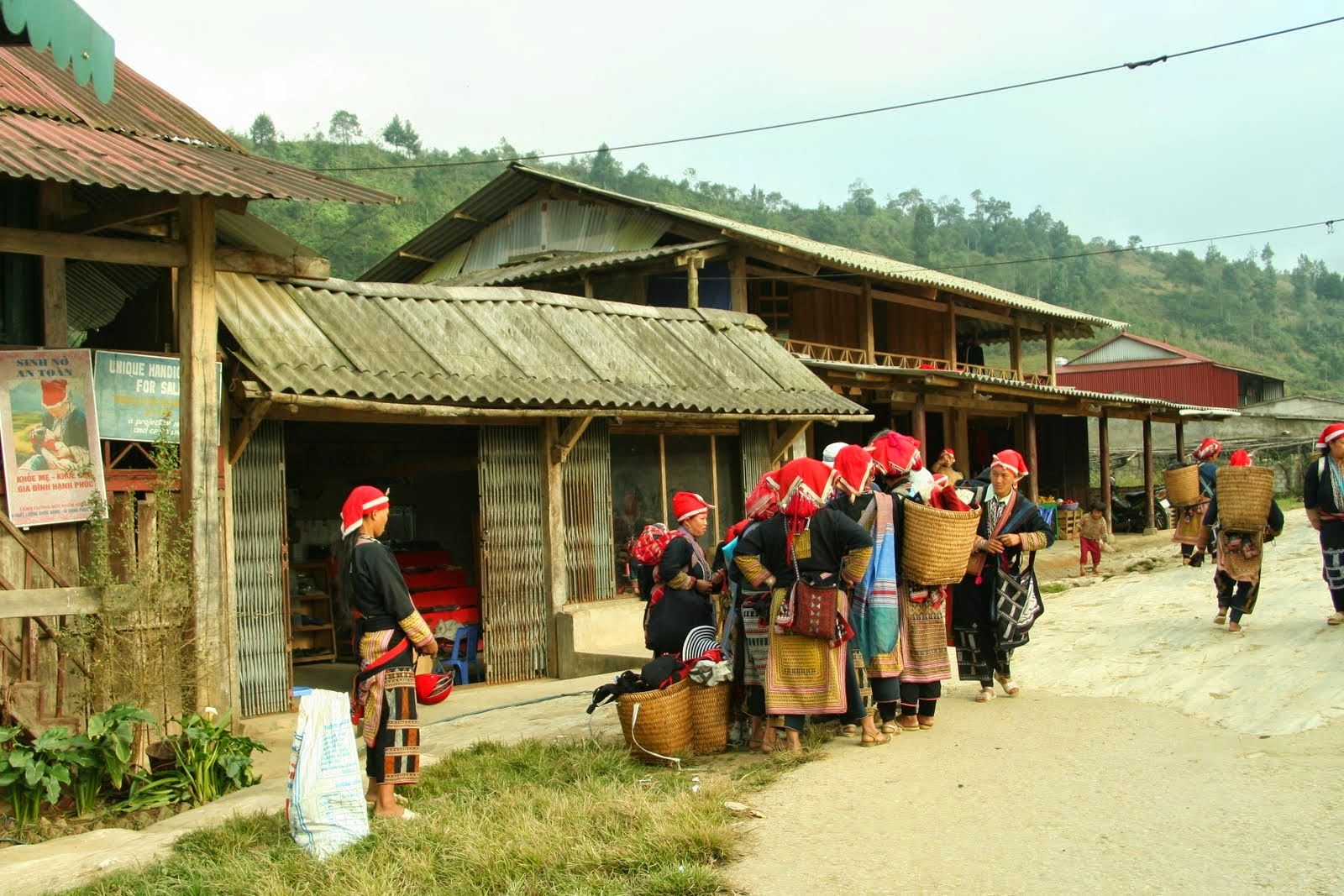 The village is famous for its peaceful beauty and unspoiled nature, where you will be able to see the terraced fields stretching like a strip of soft silk. At the same time, you can visit Ta Phin cave, which is also known as “Ti O Cam” and belongs to the Hoang Lien Son range. With a height of about 5m and a width of 3m, this cave - despite its limited area - is very attractive to visitors thanks to the stalactites with diverse unique shapes. Some areas in Ta Phin cave are very large, but there are narrow paths that allow only one person to pass through. 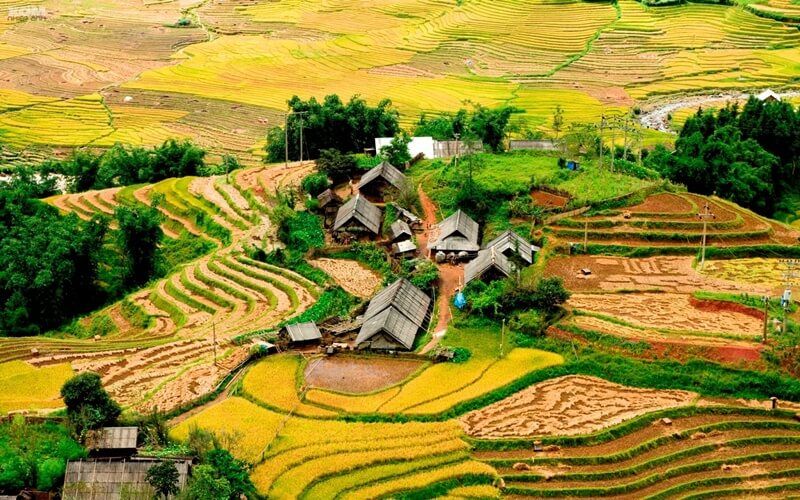 The village is also famous for brocade weaving because its products are not only sold for the local people, but also exported to Denmark, France and the US. The colourful brocade costumes associated with the daily activities of the people here create a lively picture. The motifs on the costumes are usually flowers, leaves and birds, which feature the typical “colours” of the mountains and forests of this place. You can buy brocade products such as towels and bags when visiting Ta Phin village. At the same time, this place also has other traditional crafts such as silver inlay and forging, creating a variety of handcrafted products. 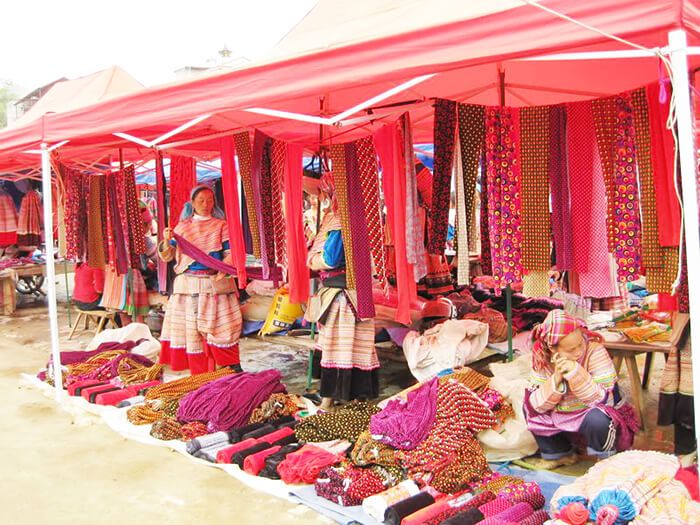 As a famous suspension bridge in Sapa due to its poetic beauty, Sapa Cloud Bridge is 17km from the center of Sapa town and crosses the dreamy Muong Hoa stream. In the past, this was the only bridge serving locals going from Ta Van commune to Sapa town center, but today, it has been one of the tourist attractions in Sapa. 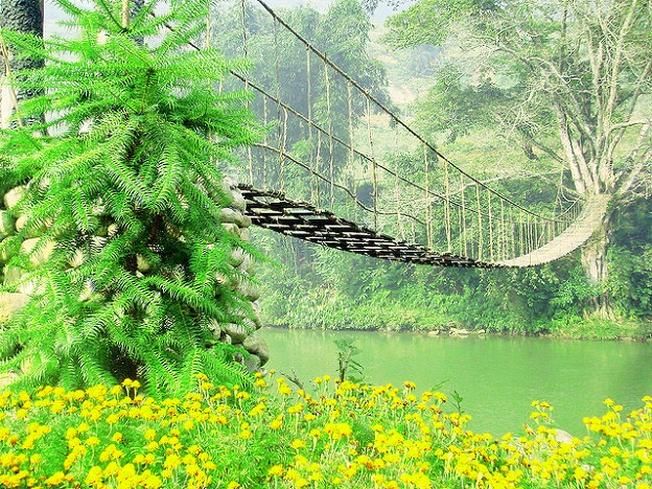 If you are “lucky” enough to visit Sapa Cloud Bridge on foggy days, you will be able to admire the clouds floating from Muong Hoa stream to cover the whole bridge. You will have the feeling of “floating” like walking on clouds when crossing the bridge, and this is also the reason as to why it is called “Cloud Bridge”.

The Stone Church in Sapa

Sapa Stone Church is located in the center of Sapa town, which was built in 1925 and completed in 1935. As a work designed by a French architect, the church was built during the French colonial period and has remained almost intact until now. The facade of the church faces the East - the direction of the rising sun - which means “receiving the light and energy from God”. Meanwhile, the bell tower at the end of the church faces the West, where Christ the King was born and grew up. 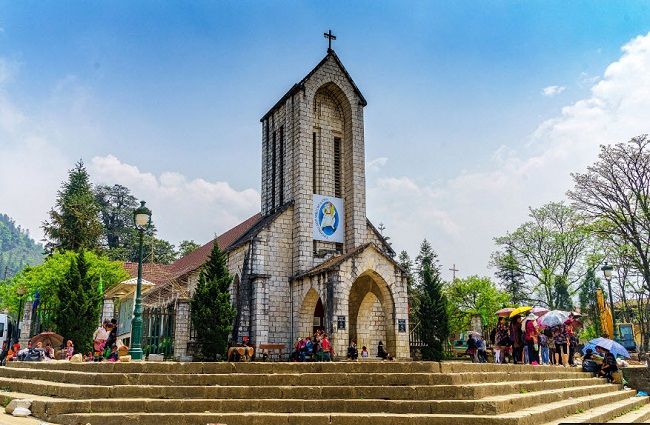 The architecture of the church is based on the Roman Gothic style. The church covers an area of ​​over 6,000m2 and is divided into seven main parts, each of which has an area of ​​about 500m2, including: church area, parish house, priest’s house, farm, Angel’s House, front yard, fence, and Holy Garden. In the early days, the church had a roof made of lime and straw, but now it is tiled. The whole church was built of ashlar instead of bricks, while the adhesives were made from sand, lime and molasses.

Ta Van village “nestles” peacefully in the beautiful Muong Hoa valley, which is about 10km from the center of Sapa town and is also the residence of ethnic minorities such as Giay, Mong and Dao. Notably, Ta Van village can still retain its inherent wildness. 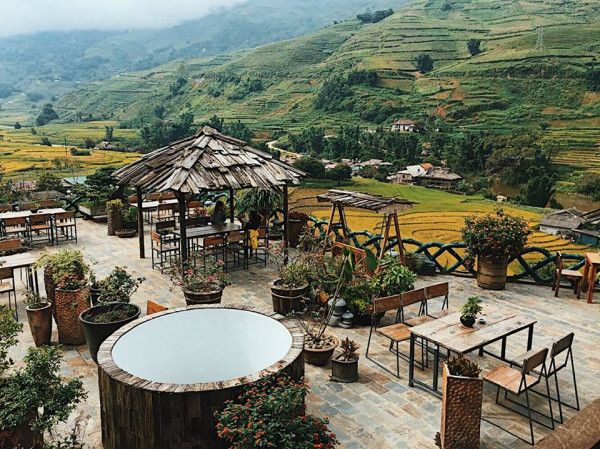 Unlike other tourism villages where the locals focus on offering travel services, in Ta Van village, in addition to households doing business like homestays and selling products, the rest still lead a simple life such as farming and animal husbandry. Therefore, when coming here, you will be able to understand more about the peaceful life of ethnic minorities.

With the terrain leaning against the mountain and facing the Muong Hoa stream, Ta Van village will give you peace of mind thanks to its pure nature. You will be able to see the terraced fields interspersed with green mountain ranges. In addition, the sounds from the streams and wild birds from afar make the space more poetic. 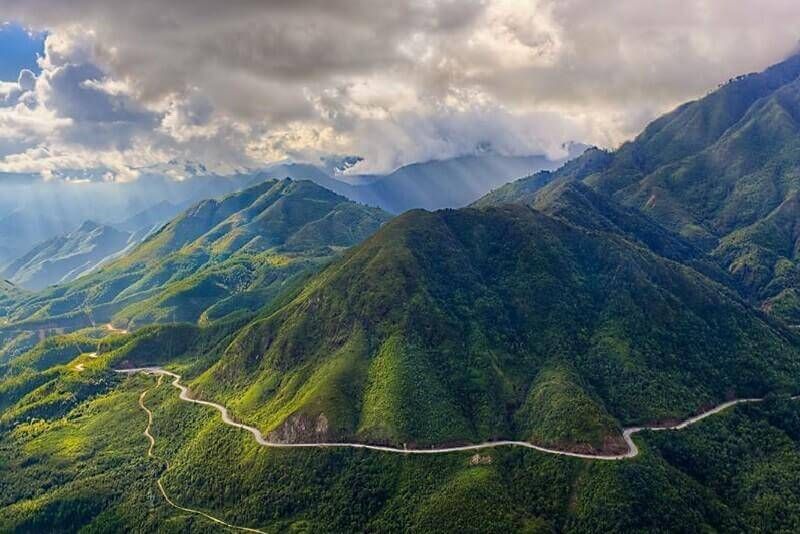 O Quy Ho is one of the "four great passes" of Northwest Vietnam. Photo: vntrip

O Quy Ho is regarded as one of the "four great passes" of Northwest Vietnam and is also known as “Hoang Lien” or “Cloudy Pass” as it is covered with clouds all year round. This is a place that attracts every travel addict due to its challenging bends and downhills that require you to have good driving skills. 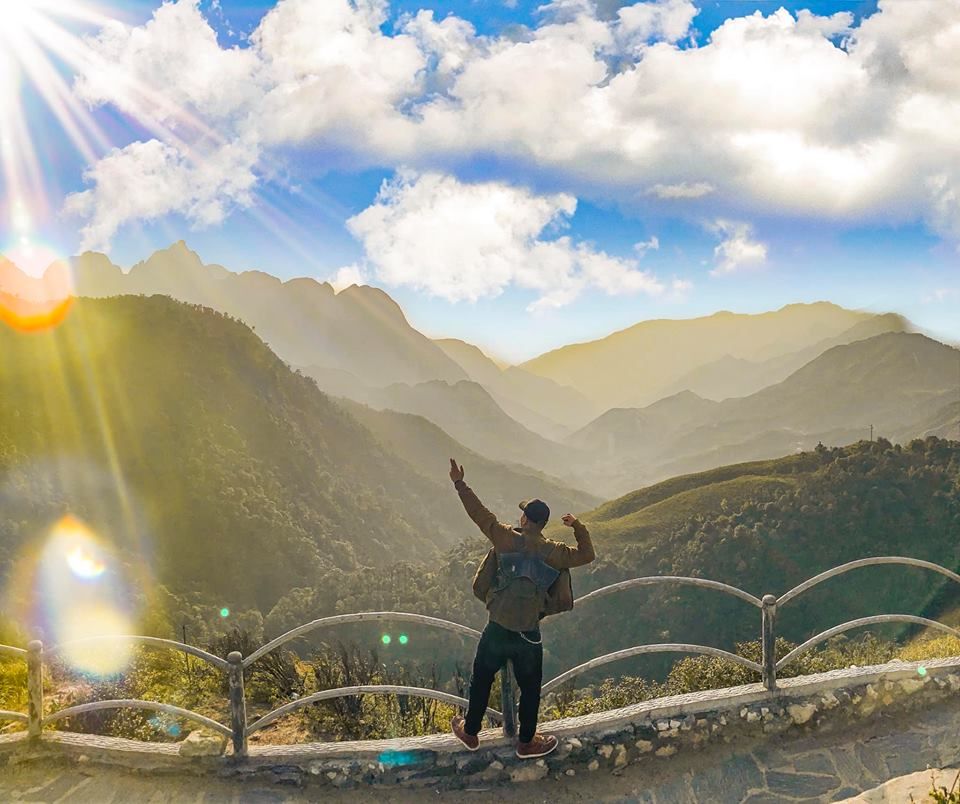 When visiting O Quy Ho in summer and autumn, you will be able to see the pass winding around the mountain like a strip of soft silk flying in the sunlight and looks outstanding among the green of the mountains and the yellow fields of ripe rice. On cold winter days, it becomes blurred by fog and white snow, however, makes for a beautiful picture amongst a charming landscape. 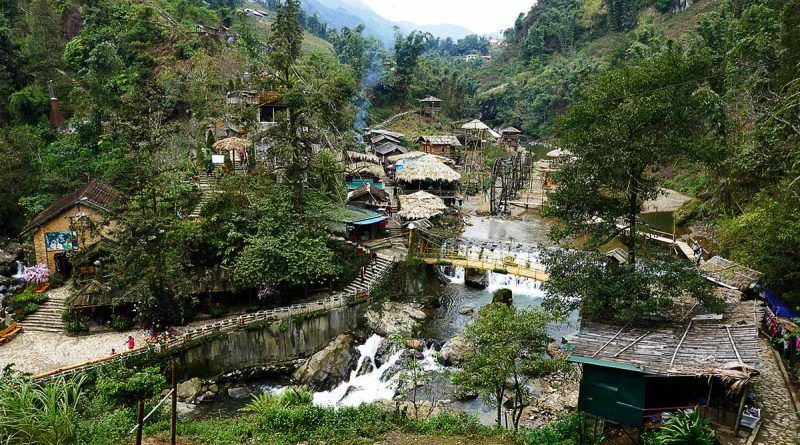 Cat Cat village is located in San Sa Ho commune, Sa Pa district, which is about 2km from the center of Sapa town. This place was formerly a resort of the French with a very beautiful waterfall called “CatScat” in French, but the locals often mispronounced it as “Cat Cat” and over time, this has led to the name today. Currently, there are about 80 households living in the village, who are mainly the H'Mong people.

This place attracts visitors with the small houses of the H'Mong people hidden under the mist, creating a romantic scene. In addition, the village has a valley with many types of flowers of all colours. When coming here, you will be able to admire the beauty of three streams (namely Tien Sa, Vang and Bac) and the Cat Cat waterfall in the middle of the village. 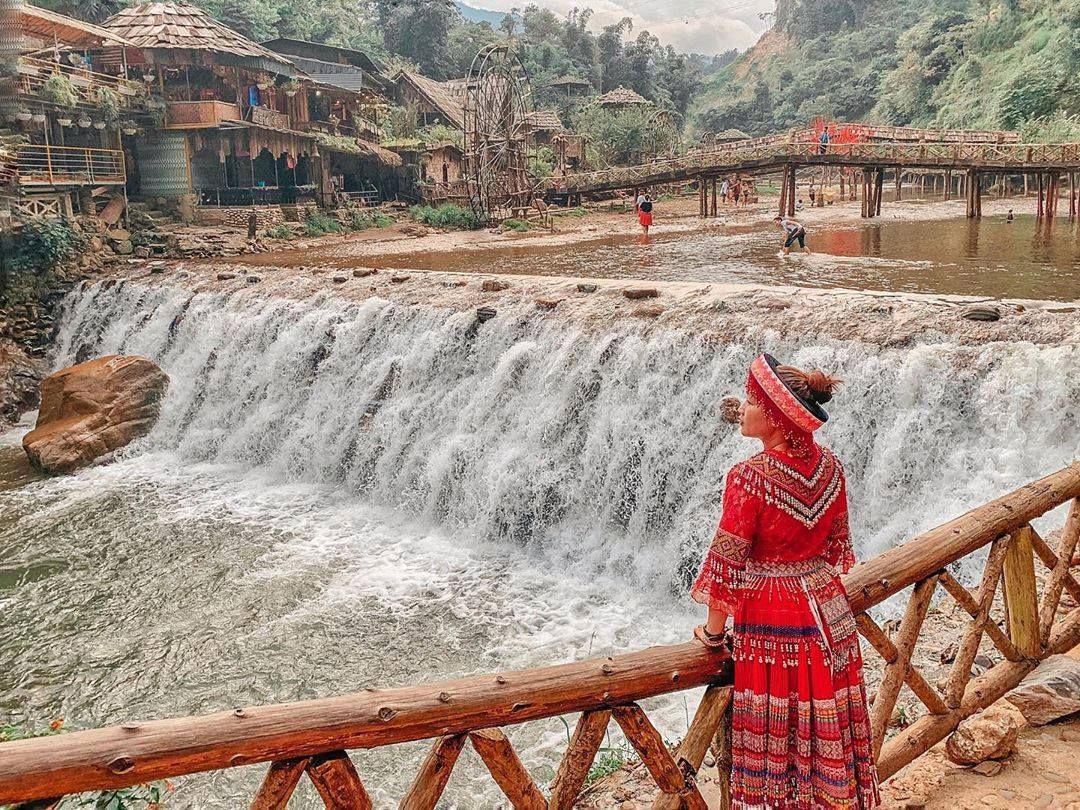 The stream in the middle of the village creates a highlight for this place. Photo: ivivu

Bac Waterfall (Silver Waterfall) in the middle of Sapa mountains

Silver Waterfall is located in Hoang Lien commune, which is next to Highway 4D and about 12km to the west of Sapa town.

On the way to the destination, you will be amazed by the terraced fields, the gardens of chayote stretching on the hillside and the vast pine forests. Silver Waterfall is the upstream part of Muong Hoa stream with an altitude of up to 200m, so the strong flows of water rushing down from above can create countless white foam as a charming painting. On sunny days, standing from Ham Rong mountain, you will be able to see Silver Waterfall as sparkling as a silver thread. When winter comes, the waterfall is covered with a very impressive 15cm thick layer of white snow. 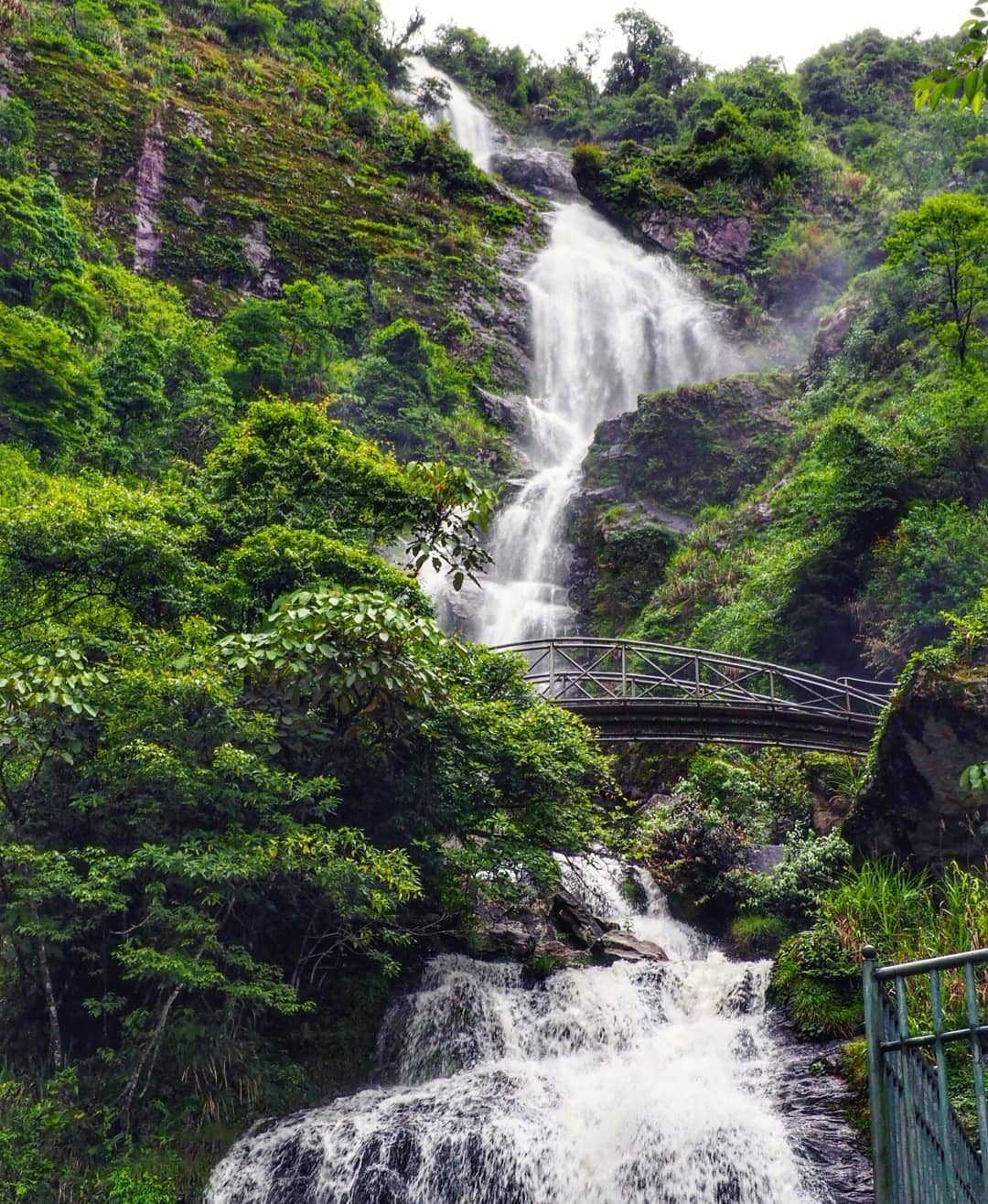 Silver Waterfall - the silver strip of silk in the middle of mountains and forests. Photo: ivivu.vn

Sapa is not only an attractive destination thanks to its wild and majestic nature, but it also has typical cultural features of the highland ethnic groups. Therefore, this is definitely a place not to be missed in Northwest Vietnam.