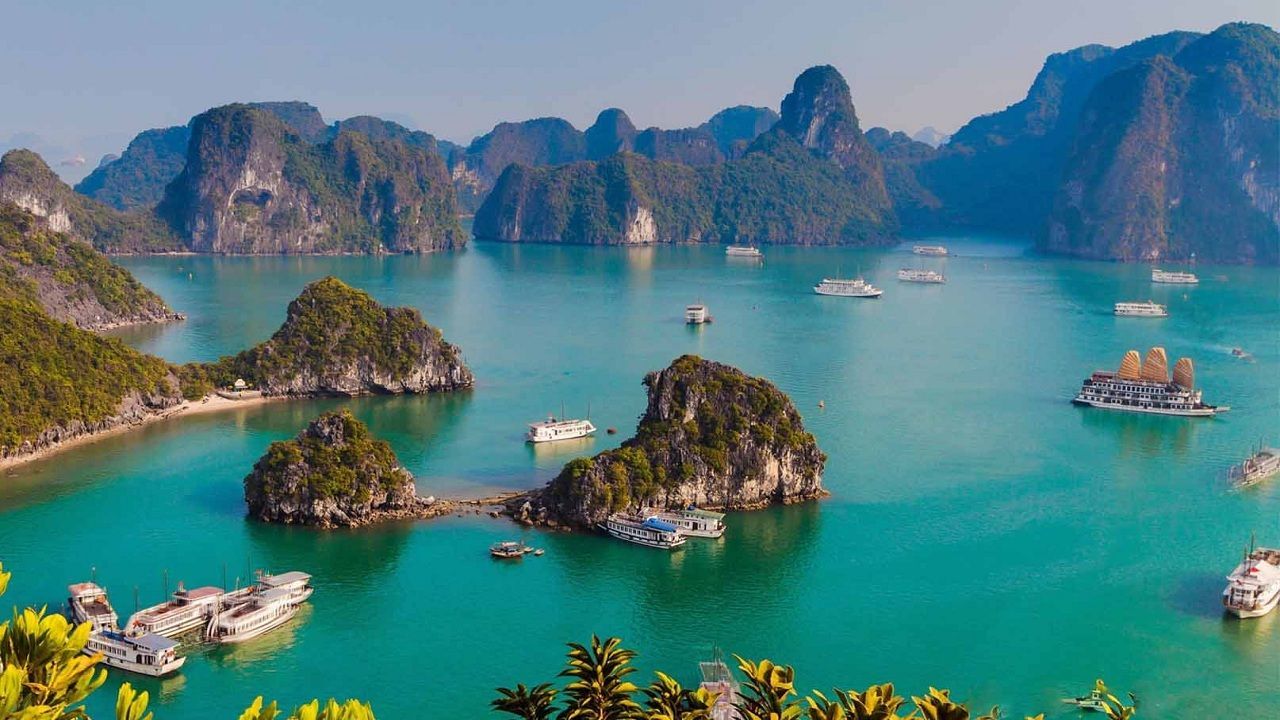 What does Ha Long Bay have that makes it one of the new seven natural wonders of the world?

Ha Long Bay is one of the most famous tourist destinations of Vietnam. Considered as “a huge and vivid ink-wash painting”, Ha Long Bay consists of thousands of large and small islands which are breathtakingly beautiful.

Ha Long Bay - the new natural wonder of the world

Ha Long is a small bay on the west coast of the Gulf of Tonkin in the Northeastern Sea of Vietnam - the northeast borders Bai Tu Long Bay; the southwest borders Cat Ba archipelago; and the west and northwest border the mainland; the Southeast and the South face the Gulf of Tonkin. Ha Long Bay covers an area of about 1,553km2, including 1,969 large and small islands, of which 989 islands have names while the remaining 980 remain nameless. 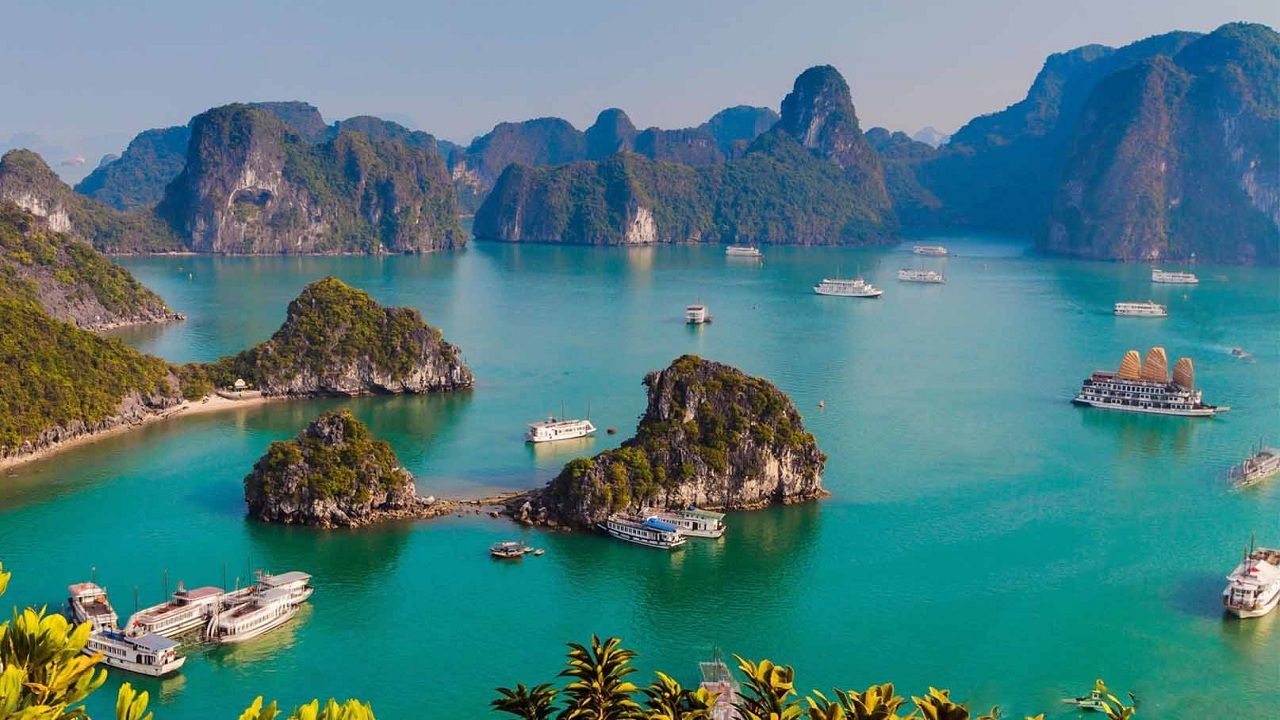 The terrain of Ha Long comprises islands, mountains and alternated sea depressions, which is a harmonious combination of rock, water and sky. 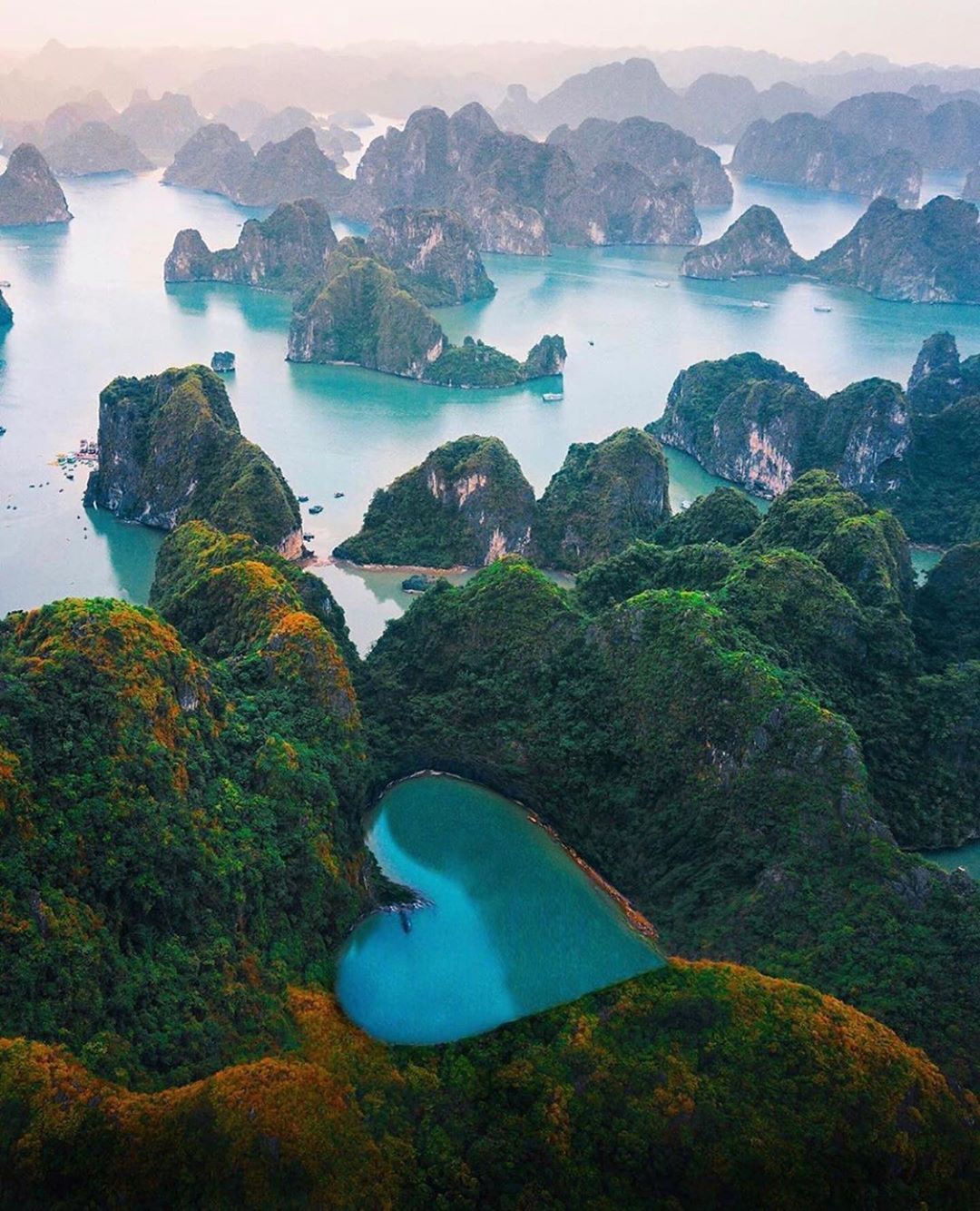 The unique beauty of Ha Long Bay seen from above. Photo: @bangaloviagens

Sung Sot Cave is located on Bo Hon Island in the center of Ha Long Bay, which is the largest and most beautiful cave in Ha Long Bay with shimmering and fanciful stalactites. The cave was discovered by the French in 1901 and named "La Grotte des Surprises" (Surprising Cave) and the Vietnamese often call it “Sung Sot Cave''. It was not until 40 years after its discovery that the cave became well-known and gradually considered a tourist destination. 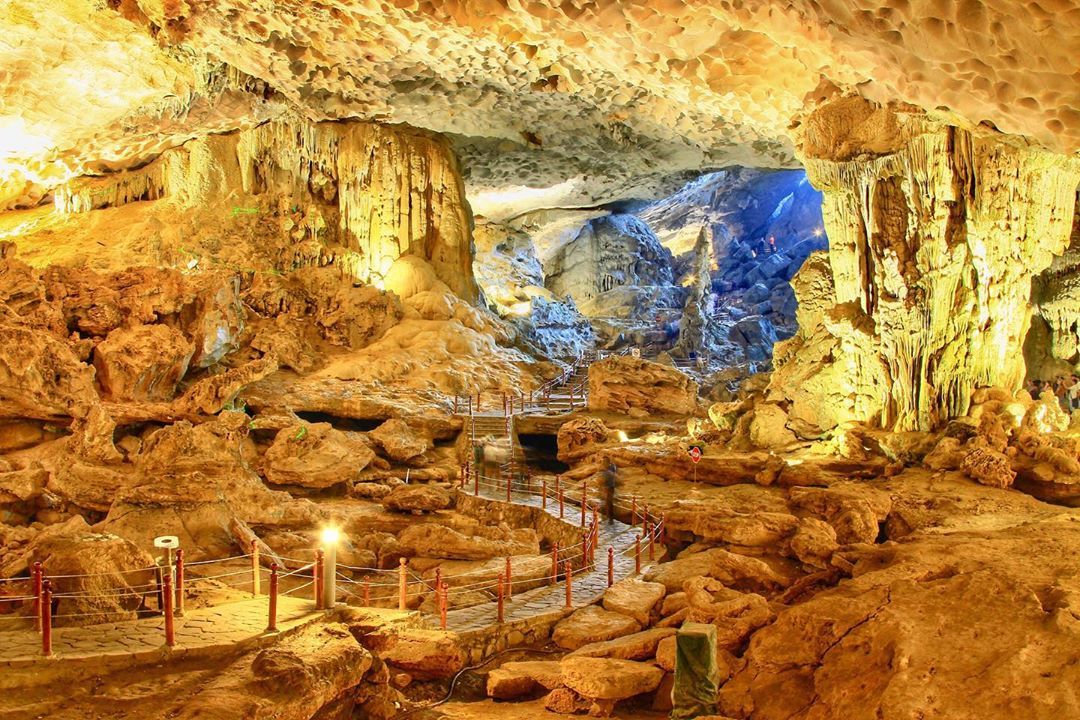 It is said that Sung Sot Cave is associated with the legend of Saint Giong. Legend has it that once upon a time, there was an old woman who lived alone. One day she stepped on a big footprint on the road, then she got home and found herself pregnant. After some time, she gave birth to a boy and named him “Giong”, but weirdly, when Giong turned three years old, he could not speak. One day, when the king's ambassador traveled around the country to look for talented people to fight the An enemy, Giong suddenly spoke and asked the king to forge an iron horse, an iron sword, iron armor and an iron conical hat for him. After that, Giong ate the rice cooked by his mother and grew up in front of everyone’s eyes. He rode the iron horse to defeat the enemy and then flew back to the sky. It is said that the small ponds and rocks surrounding Sung Sot Cave are traces of the old horseshoe of Saint Giong when he was in the battle against the enemy.

Sung Sot Cave has a total area of ​​​​about 10,000m², a length of more than 200m, at an altitude of 25m above sea level. As suggested by the cave’s name, the deeper you go into the cave, the more surprised you will be. The cave is divided into two main areas, first of which is like a spacious theatre whose ceiling is covered with countless glittering stalactites like a shiny "velvet carpet". The second area is so large that it can accommodate thousands of people. 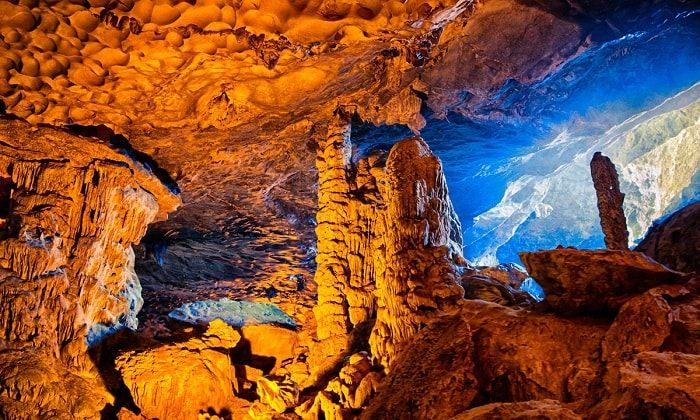 Stalactites in the cave. Photo: dulichvietnam

Due to its “magical” shimmering beauty, in early 2012, Sung Sot Cave was voted as one of the top 10 most beautiful caves in the world by the Czech Association of Tourist Offices and Brokers. 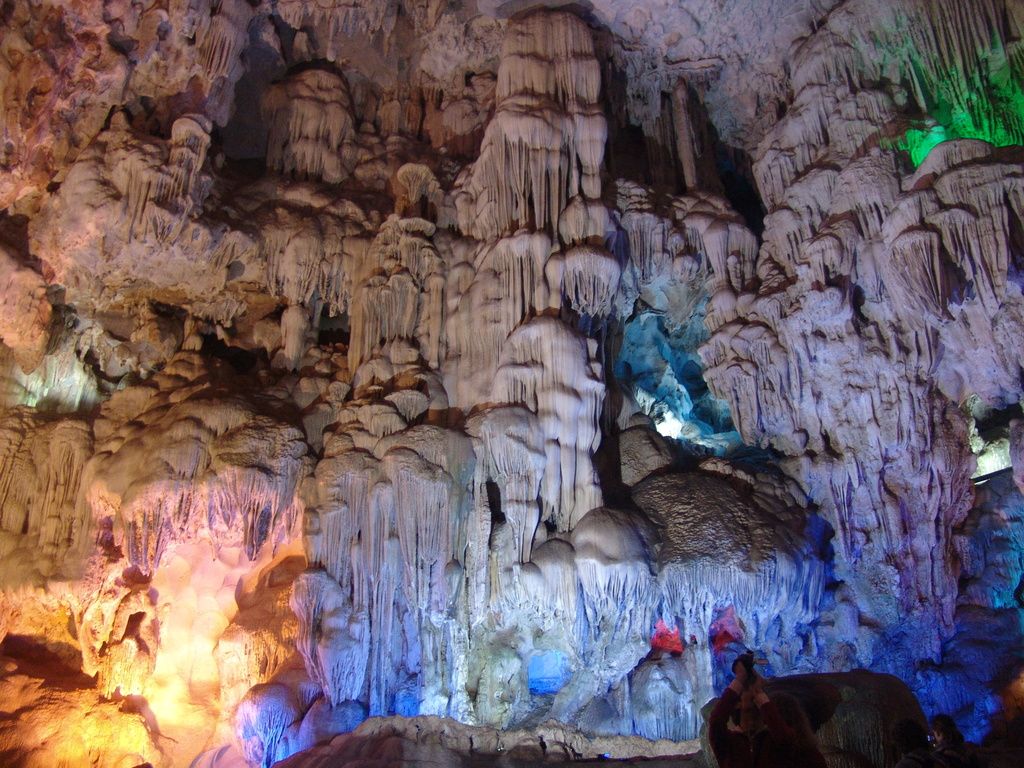 Thien Cung Cave is associated with the legend of the love of the Dragon King and the girl named May. Photo: Otrip

Thien Cung Cave is located in the Dau Go archipelago in the southwest of Ha Long Bay, at an altitude of 25m above sea level, about 4km from Bai Chay Beach. The reason it's called "Thien Cung'' (Heaven) is because when coming here, you will have the feeling of entering a palace in heaven with stalactites shaped like dragons and phoenixes.

Thien Cung Cave is associated with the legend of love. In the past, there was a Dragon King who often helped people fight their enemy and pray for good weather, and then he fell in love with a girl named May. The two decided to have a wedding with a lavish party for seven days and seven nights in the center of the cave. At the wedding ceremony, a lot of dragons flew around the stalactites, which “explains” why the Thien Cung Cave today has many stalactites with such diverse shapes. 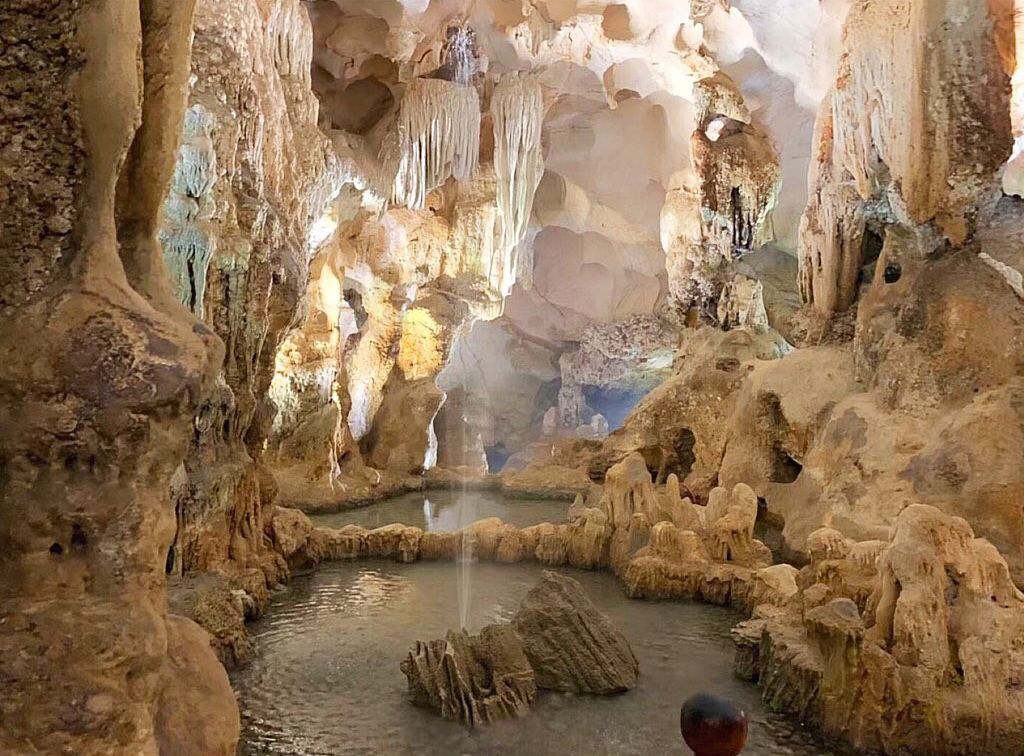 Inside Thien Cung cave, there are many stalactites shaped like dragons and phoenixes. Photo: @k.kanakoooo

Thien Cung cave has an area of about 10,000m2 with an extremely complex structure, including many layers and sections with high ceilings and walls. In the center of Thien Cung cave, there are four huge pillars, and from the foot to the top of these pillars there are many shapes such as birds, fish, human activities, plants and flowers.

To enter the Thien Cung cave, you will have to go along a road located on a craggy cliff which is covered with trees on both sides.

At the end of Thien Cung cave, you will set foot on Dau Go cave - the cave with magnificent stalactites. The reason the cave has such a name is because when Tran Hung Dao fought against the Nguyen Mong army, he buried many wooden stakes in the Bach Dang river to build a battlefield to destroy the enemy's ships. After that, there were many pieces of wood left in this place, so it was called “Dau Go Cave” (Wooden Stakes). 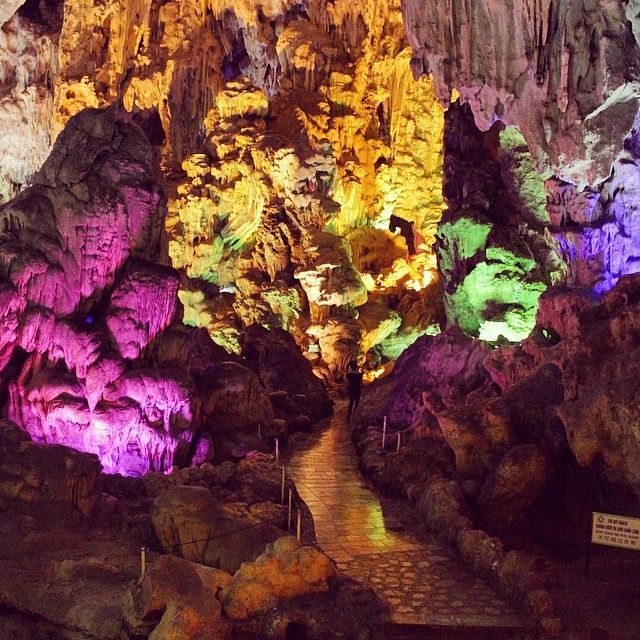 The space inside Dau Go Cave is very fanciful and shimmering.. Photo: @tinamagic

Dau Go Cave has an area of about 5,000m2, located at an altitude of 27m above sea level. Looking back from afar, the entrance of the cave is like a blue jellyfish. The cave has a height of about 25m with hundreds of giant stalactites hanging down like charming waterfalls. 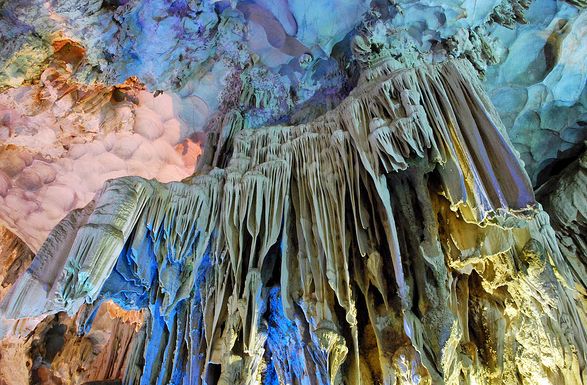 Beautiful stalactites and stalagmites in the cave. Photo: zing.vn

The entrance of Dau Go cave is divided into three main sections with beautiful stalactites on the walls and ceilings. The first outer compartment has a dome shape, whose ceiling is a giant picture of the wild natural landscape. When coming to the second compartment, you will be surprised at the magical beauty of the rays of sunlight reflecting on the stalactites. The third compartment is located in the heart of Dau Go cave with the highlight of the large pillars delicately “carved” by nature.

Trong Mai Islet is located in the southwest of Ha Long Bay, about 5km from Bai Chay beach. As the islet is shaped like two giant chickens (one cock and one hen) with a height of about 10m above the sea surface, it is called Trong Mai (Cock and Hen). 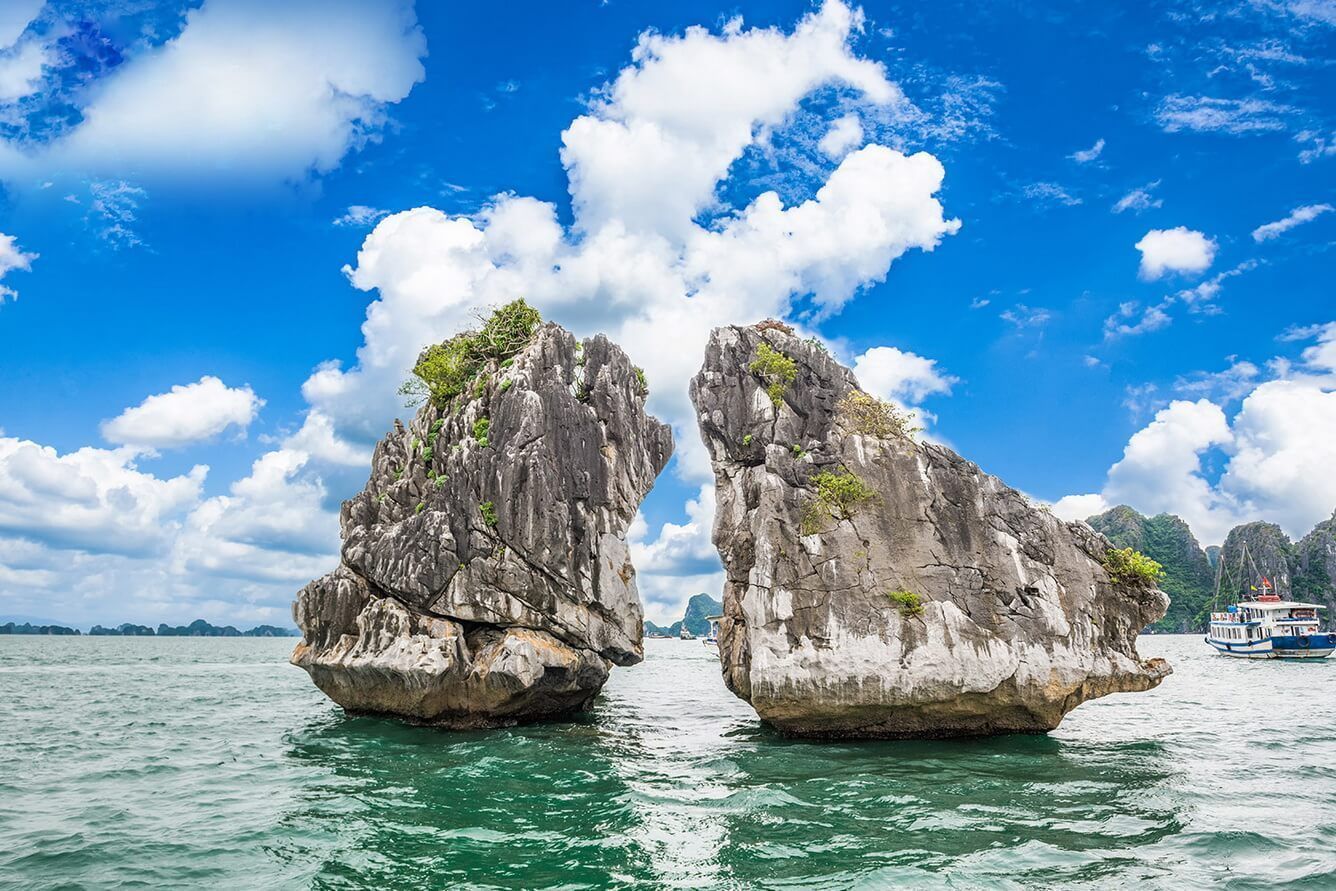 Trong Mai islet is shaped like two chickens looking at each other, and from a distance, the two rocks seem to be floating on the water, which is very impressive.

Trinh Nu and Trong Cave are two familiar names to domestic and foreign tourists when they travel in Ha Long Bay. Not only are the two caves attractive with shimmering stalactites, but their legendary story also intrigues many people. Legend has it that, once upon a time, there was a beautiful fisherwoman whose family was poor, so she had to work for the owner of a fishing area. As she was beautiful, the employer forced her to be his wife, but because she had a lover, she refused him, which resulted in her expulsion to a deserted island. On a rainy and windy night, due to being hungry and tired, she died and was petrified there. After that, her lover knew the situation and rowed a boat to the island to find the girl regardless of the upcoming storm. From a distance, he saw her, so he struck a stone on the cliff to inform her about his appearance but she couldn’t listen anymore. Finally, being exhausted and miserable, the man also became petrified. In one cave, there is a horizontal rock that looks like a girl with long hair and her hands are reaching out to the sea, so it is called Trinh Nu (Virgin) cave. The other cave has a stalagmite that looks like a guy looking out to sea, so it is called Trong (Male) cave. 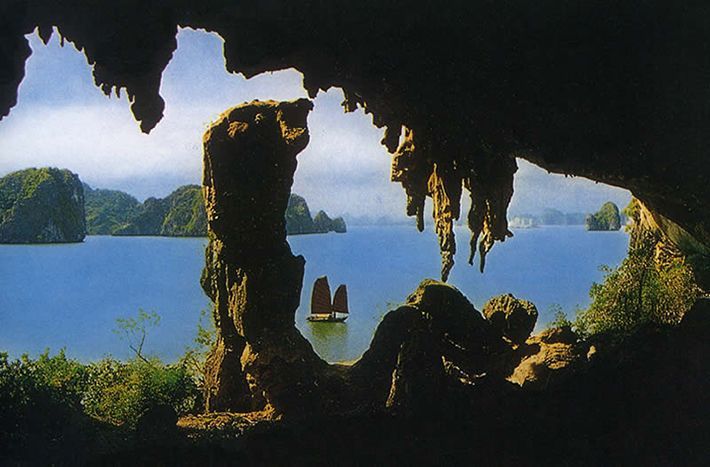 Trong Cave has a stalagmite that looks like a guy looking out to sea. Photo: laodong.vn 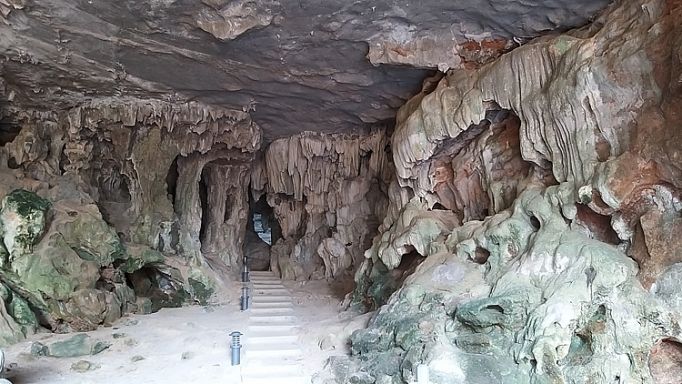 Trong Cave is opposite Trinh Nu Cave, which is located on Bo Hon Island, about 15km from Bai Chay beach and 12km from Ha Long City. The two caves are about 700m apart through a small lagoon, and notably, the entrances of the two caves face two different directions. The stalagmites in the Trong Cave resemble the image of a giant man overlooking the immense sea, while in the middle of Trinh Nu cave there is a lying rock statue of a girl with long hair overlooking the sea as well.

Con Coc island is about 14km to the east of Tuan Chau International Port and is a part of Ha Long Bay. Shaped like a toad in the middle of the immense sea, Con Coc islet is considered a masterpiece of nature bestowed on Ha Long Bay. With a height of about 9m, the islet has some green trees, making it more beautiful and lively. 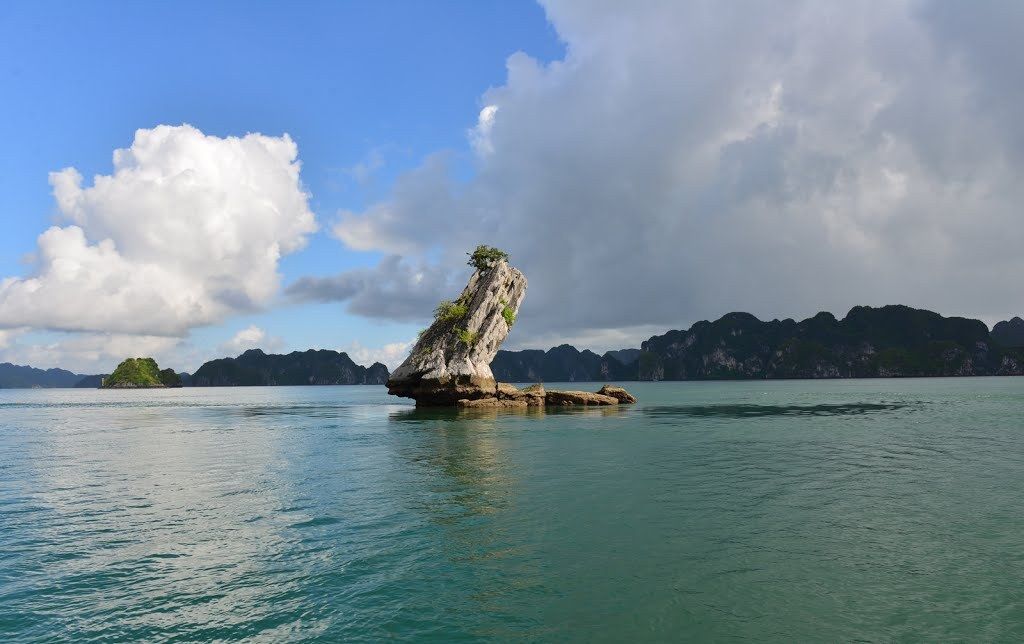 In the middle of Ha Long Bay, Con Coc islet contributes significantly to the interesting discovery journey of domestic and foreign tourists in this charming bay.

The best time to travel to Ha Long

Ha Long Bay has four distinct seasons. The period from April to June is the peak season when you can enjoy swimming and participating in activities such as boating, windsurfing and skydiving. From July to August, as there are many storms and tropical depressions, it would not be convenient for you to travel around at this time. From September to November, the weather in Ha Long Bay is sunny with few storms, very suitable for you to sightsee and experience. 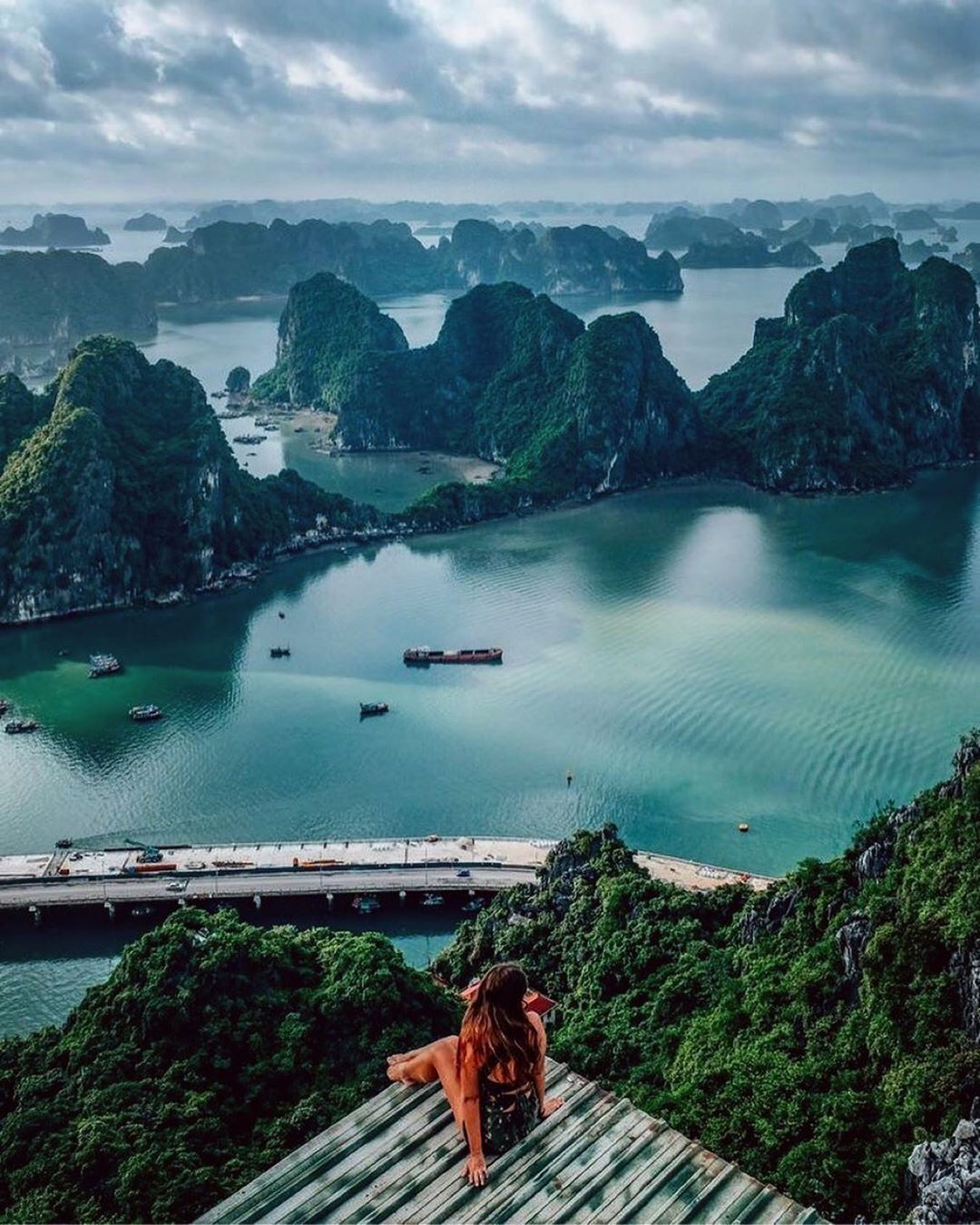 You should visit Ha Long Bay in the period from April to June. Photo: @vietnamtravelers

With beautiful natural scenery, Ha Long Bay is definitely a destination that will surprise you. When coming here, you will be able to admire the green islands and beautiful caves while discovering a series of interesting legends about these places.