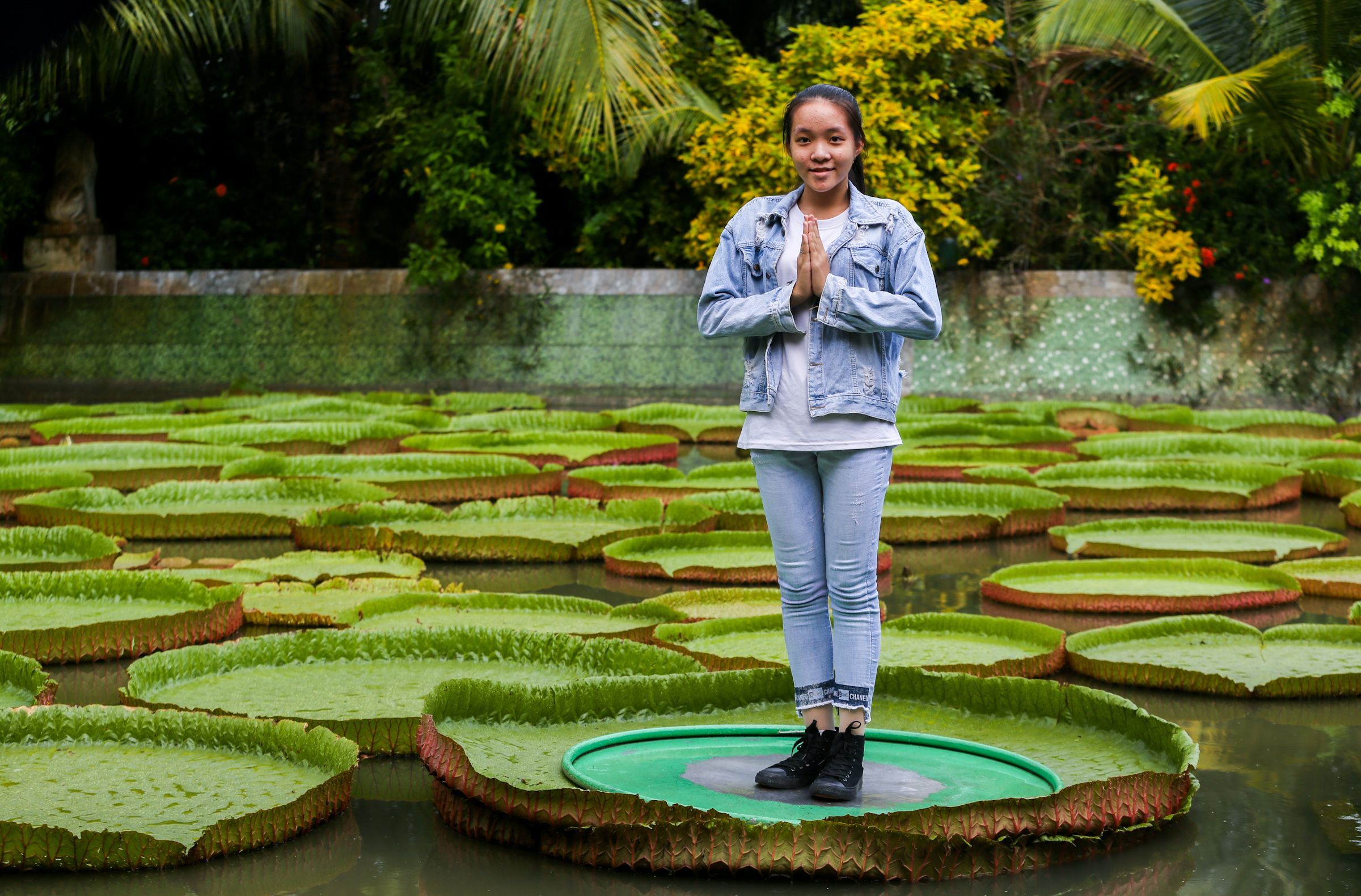 Phuoc Kien is one of the most famous pagodas attracting many domestic and foreign tourists in Southwest Vietnam. In addition to having a long-standing history, this temple possesses a very special pond of lotus whose leaves can load a person weighing up to 140kg.

An introduction to Phuoc Kien Pagoda

Phuoc Kien is a small pagoda located in Hoa Tan commune, Chau Thanh district, Dong Thap province, but the locals often call it “La Sen” Pagoda (The Lotus Leaf) as this place has a lotus species with giant leaves that can "carry people".

Until now, no one knows exactly when the pagoda was built, but it is said that the pagoda was formed before the reign of King Thieu Tri who ascended the throne in 1841. In 1966, the pagoda collapsed due to wars, but after 1975, it was rebuilt with today's architecture. 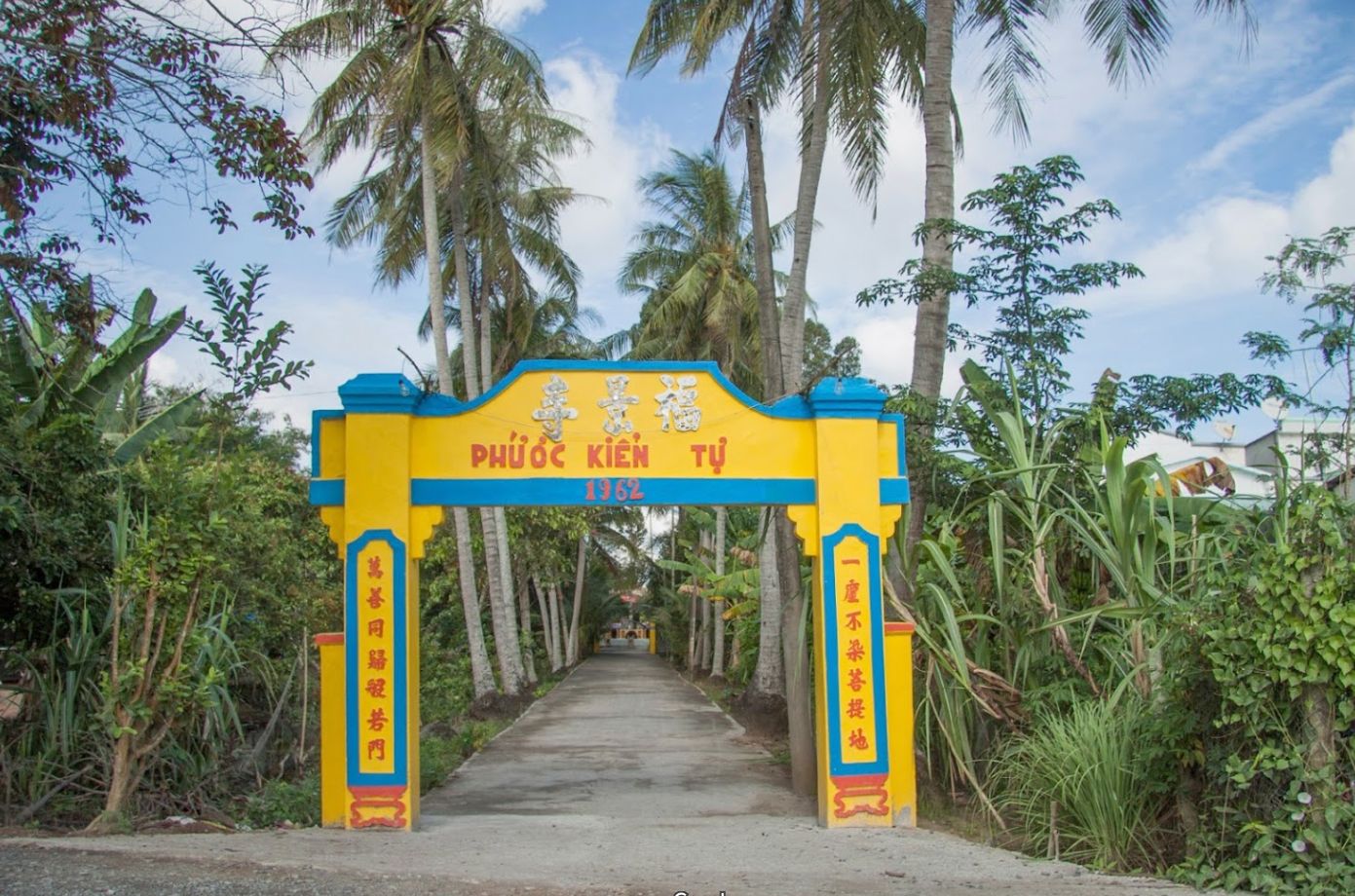 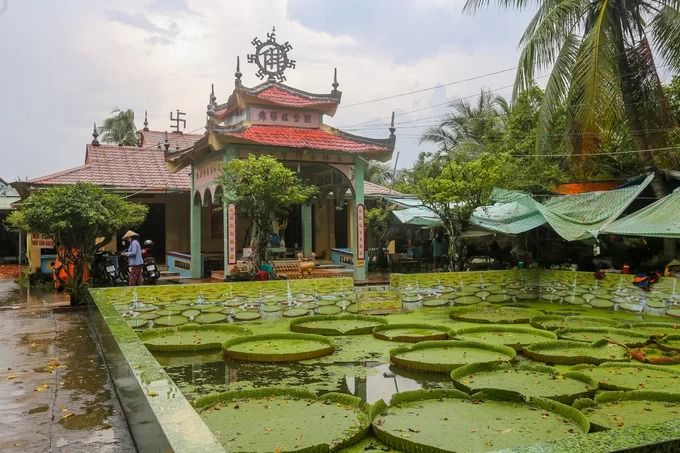 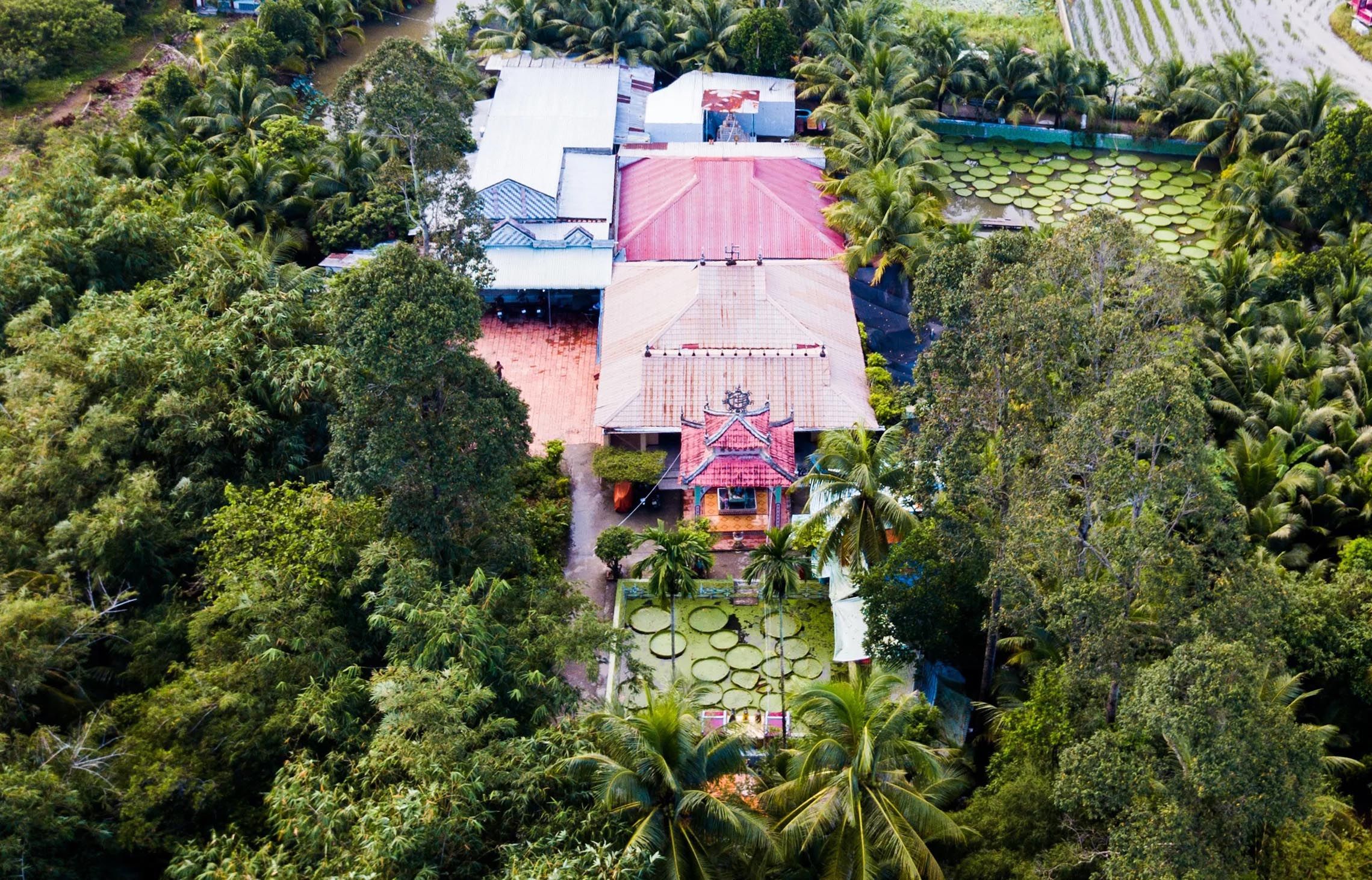 The architecture of Phuoc Kien Pagoda is relatively simple with works such as the entrance gate, the tower worshiping Quan Am Buddha and the main hall. Originally, the main hall worshiped Buddha, but then worshiped both the Mother Goddess Dieu Tri and Jade Emperor (Ngoc Hoang). The campus of the pagoda is airy and peaceful with fresh air due to being covered with green trees, most of which are coconut trees - the typical tree in Southwest Vietnam. 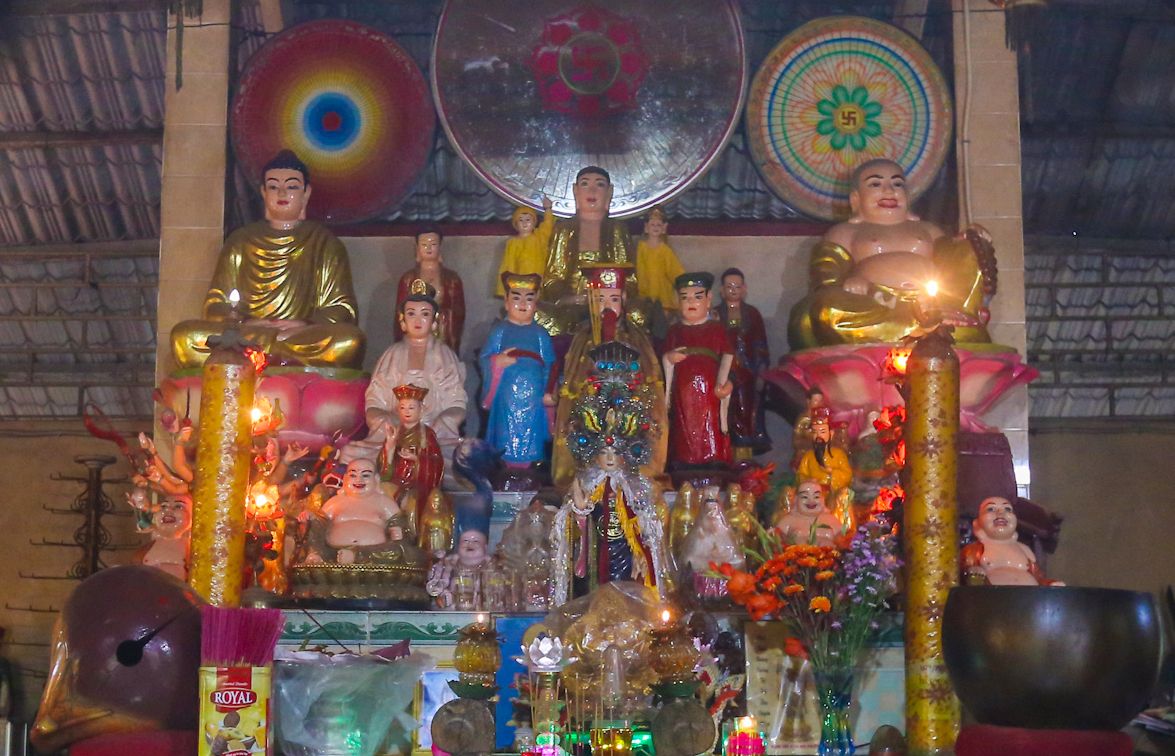 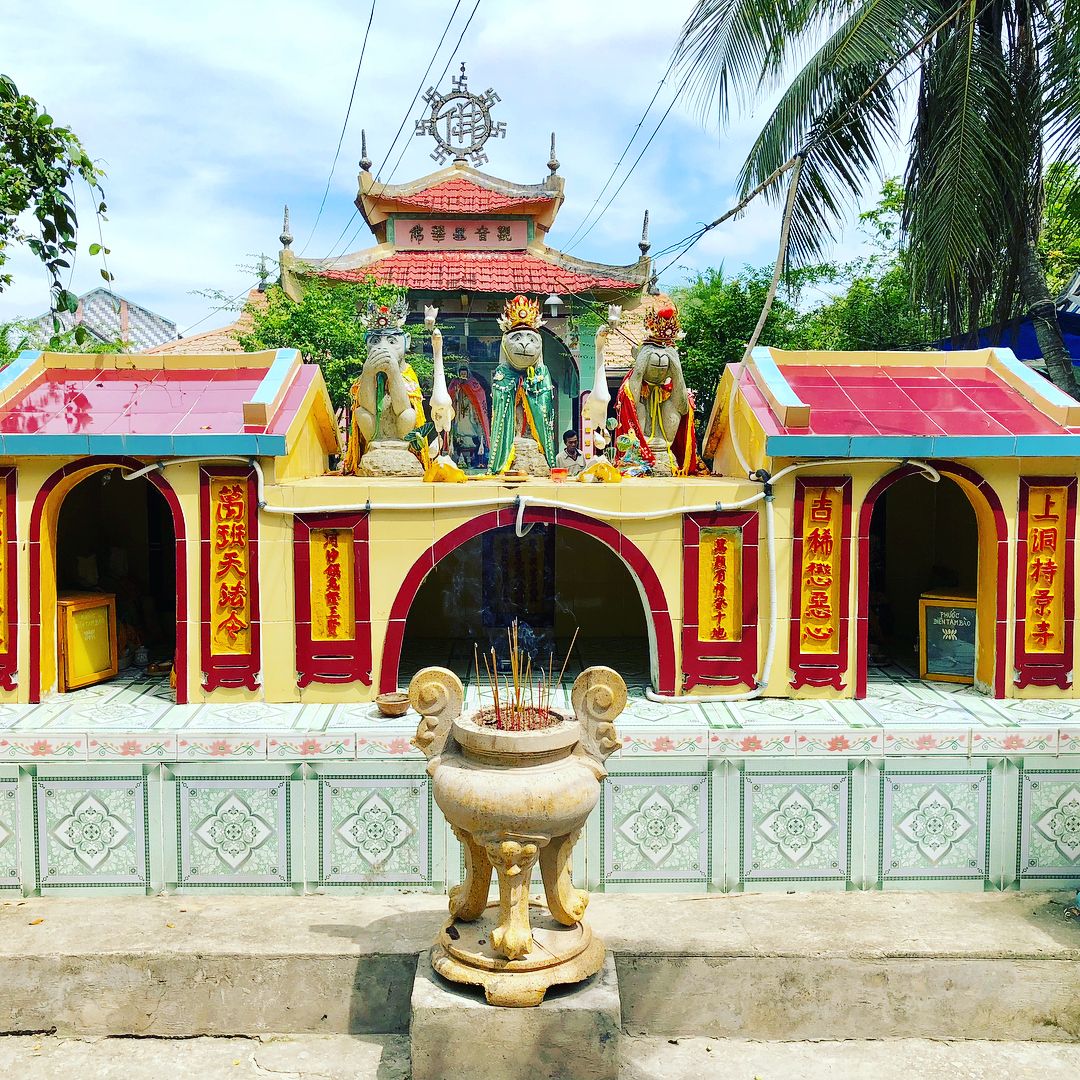 Three statues with the meaning of "hearing no evil, seeing no evil, speaking no evil " are placed next to the lotus pond. Photo: Ảnh: timkiemcongnghe.net

The pagoda is also famous for its unique giant lotus species. In 1992, Venerable Thich Hue Tu was given this lotus variety by Buddhists and planted it in a lake in front of the pagoda. In the past, it was originally a bomb crater, but then was renovated into a lake. The lotuses are planted in a square lake representing the earth, while the round lotus leaves represent the heaven. In the middle of the lake, there is a small bridge to facilitate the visit of tourists and Buddhists. 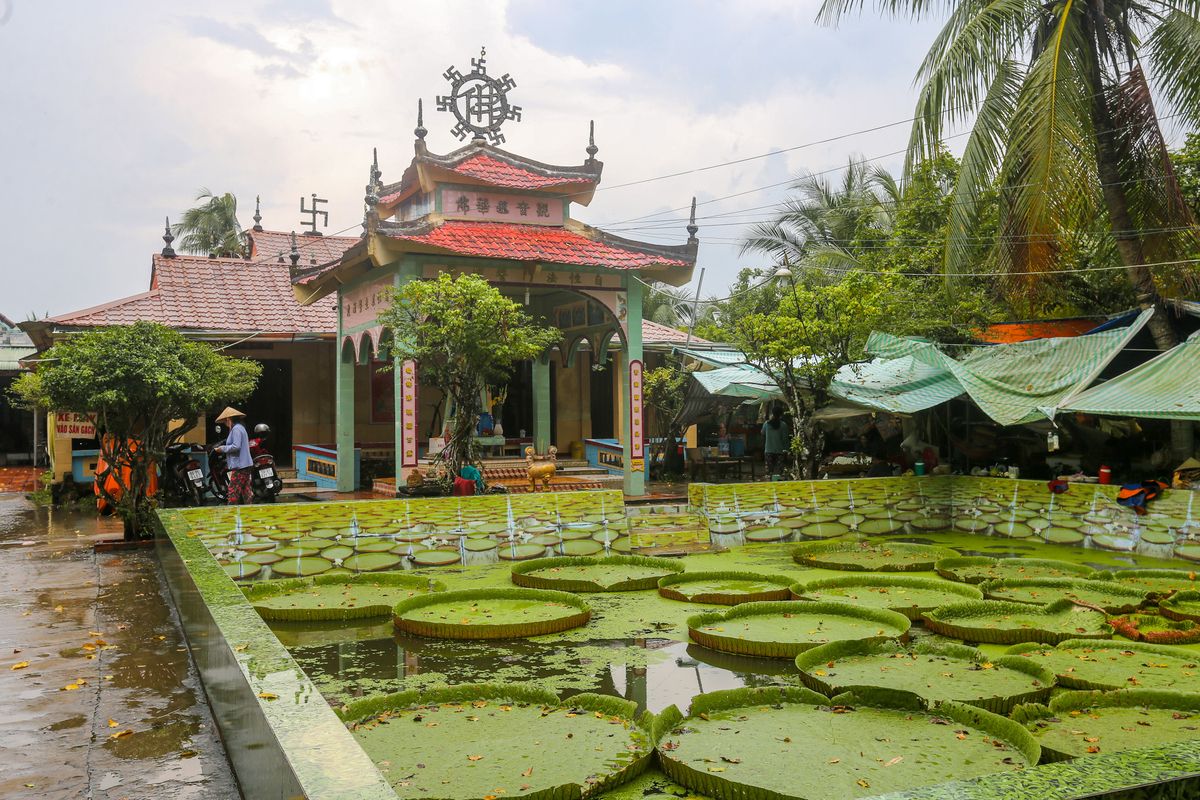 The lotus pond is located in front of the pagoda. Photo: Vnexpress 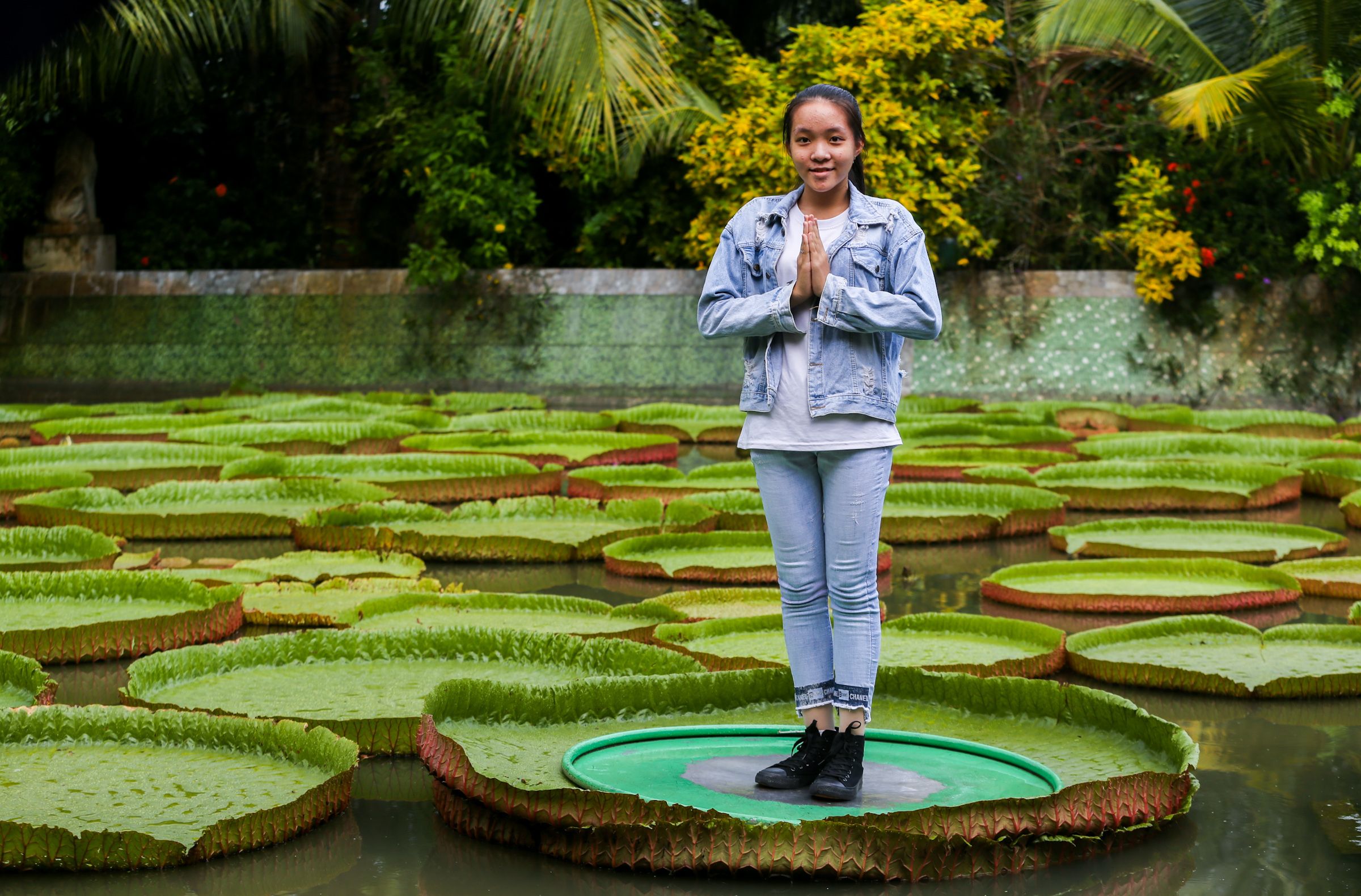 The lotus leaves in the pagoda can "carry people". Photo: Vnexpress

This lotus variety originates from the Amazon region with the scientific name “Victoria Regia”, but Vietnamese people often call it “nong tam” or “sung nia”. The leaf of this lotus species is large and thick with many thorns (under the leaf) to help it avoid the attack of aquatic animals. Another special feature of this giant lotus is that its leaf size can change according to the season: in the dry season, the lotus leaf has a diameter of only about 1m, while in the rainy season, the one in Phuoc Kien pagoda can be up to 2.5m - 3m wide. The edge of the leaf is about 2 - 5cm high above the water surface and looks like a very fancy Quai Thao hat (flat palm hat with fringes). The lotus leaf can withstand weight up to 140 kg on the petiole as big as an adult's wrist. Interspersed on the surface of the green lake with giant lotus leaves are pure white lotuses or pink water lilies. 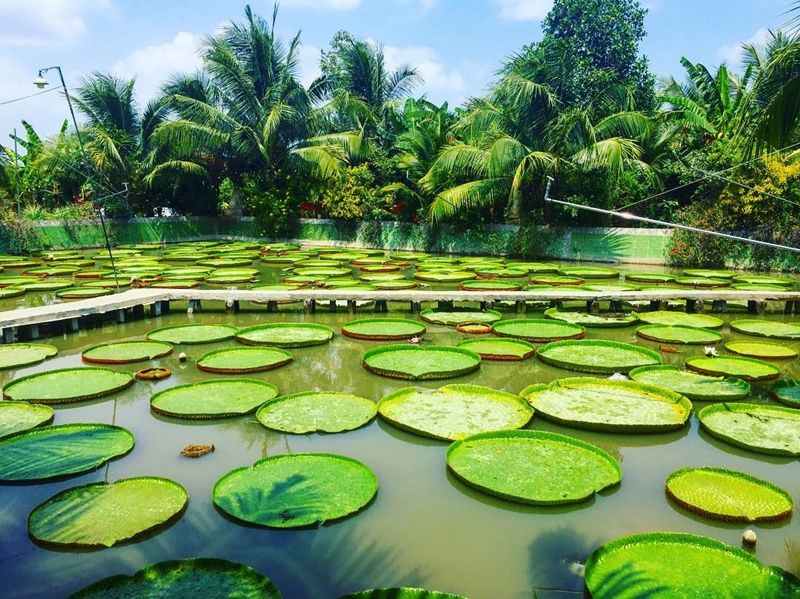 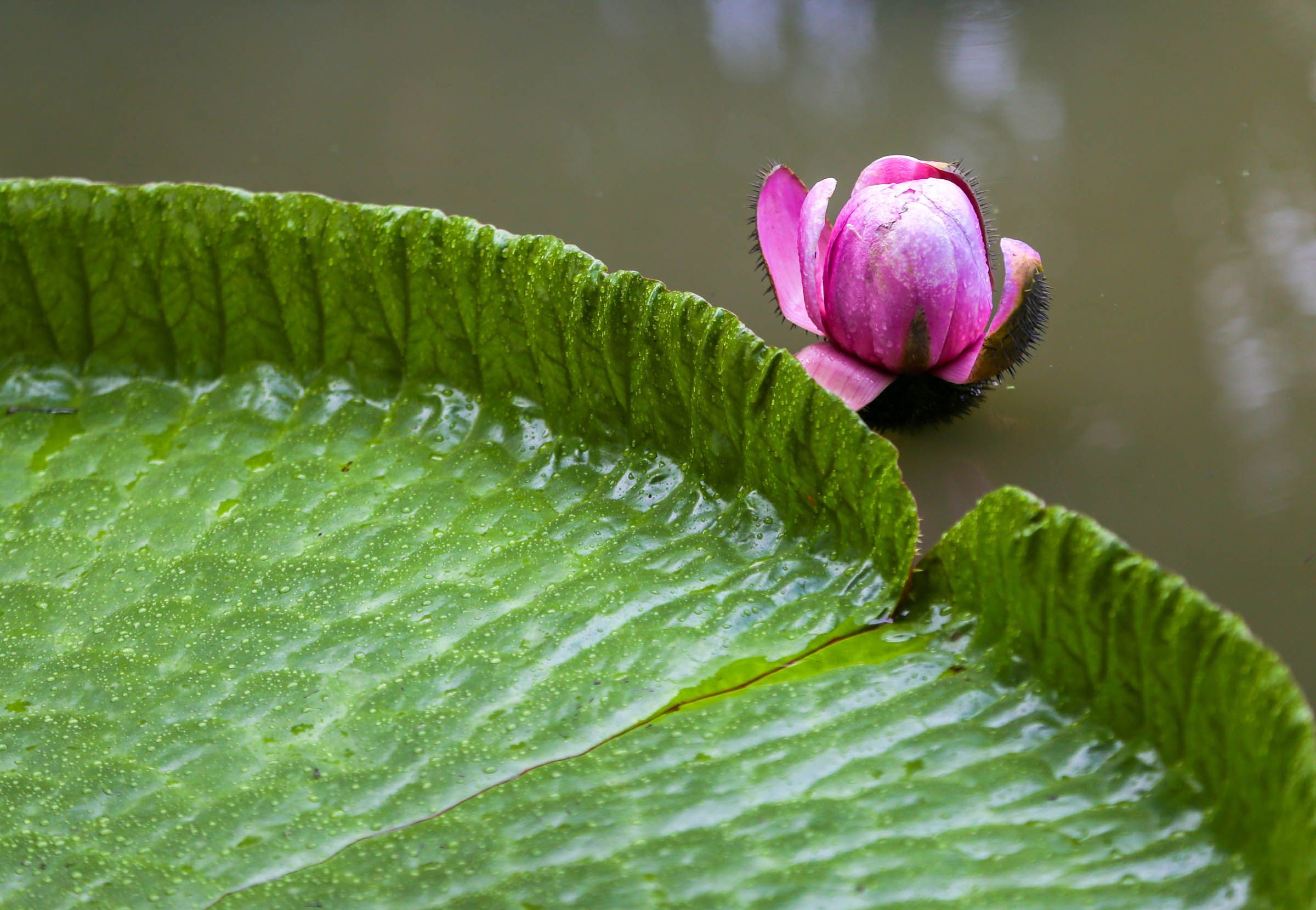 A close-up of a giant lotus leaf. Photo: Vnexpress 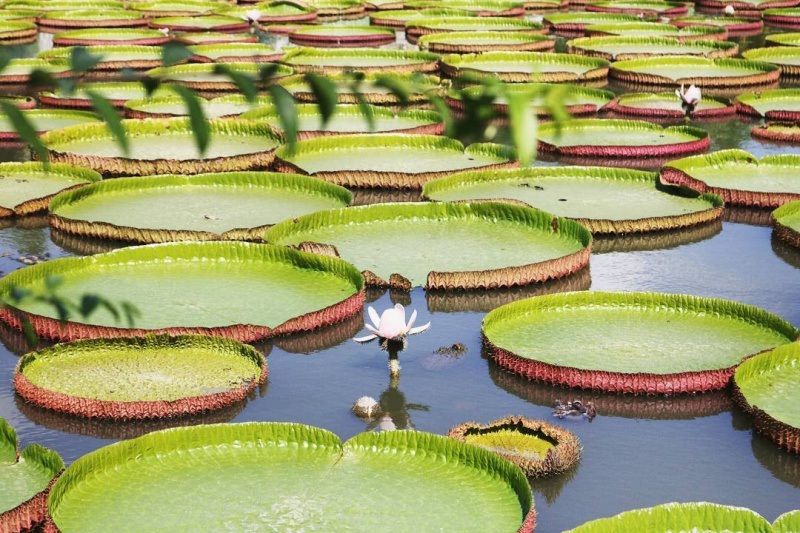 In addition to lotus, the lake has white lotuses and water lilies. Photo: ivivu.vn

The ideal time to visit the unique lotus pond at Phuoc Kien Pagoda is around September - October as during this time, the lotus leaves are plentiful, large and thick, covering all of the pond surface.

The story about the friendship of the turtle and the crane

In addition to being famous for the giant lotus species, Phuoc Kien Pagoda has an interesting story about the friendship between a turtle and a crane. The abbot said that in 1948, someone gave the pagoda a turtle which always sat next to the monk and listened to the chanting. In 1966, the pagoda collapsed; the turtle got lost, but then came back to the temple itself. In 1999, there was a crane which often perched on the back of the turtle as if to have fun. After that, the crane was brought back to the nature reserve as it was a wild animal and cannot stay in the pagoda. After the crane was taken away, the turtle was so sad that it passed away. The abbot was mourning, so he embalmed the turtle's body, put a rosary on the turtle's neck, and placed it in the pagoda to worship. 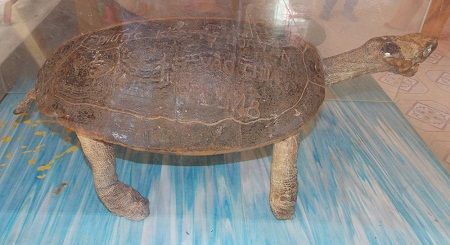 Close-up of the embalmed turtle at Phuoc Kien pagoda.

Today, Phuoc Kien Pagoda has four turtles, one of which is 105 years old. They are completely “vegetarian” and healthy, and “hang around” the pagoda every day to listen to the chanting and reciting of Sutras.

How to get to Phuoc Kien Pagoda

From Saigon, you can move along these two following routes to get to Phuoc Kien Pagoda:

- Route 1 (for cars only): Travel in the direction towards Binh Chanh; at Binh Thuan intersection, turn to Saigon - Trung Luong highway. After that, you can go straight for about 50km and turn right onto National Highway 1A to My Thuan Bridge. 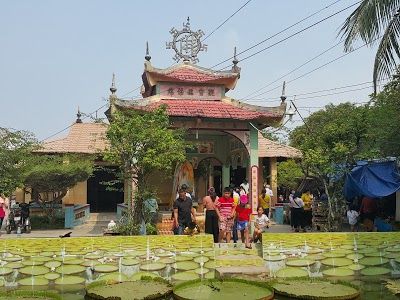 From My Thuan bridge, you can travel along Highway 80 about 15km to come to Nha Man market, from which, turn left with a distance of about 9km to Phuoc Kien Pagoda.

Phuoc Kien Pagoda is not only a place of pilgrimage and worshiping Buddha of local people, but it is also a famous tourist destination of Dong Thap province. When coming here, you will be able to admire the unique giant lotus species that can "carry" people that cannot be found anywhere else in Vietnam.