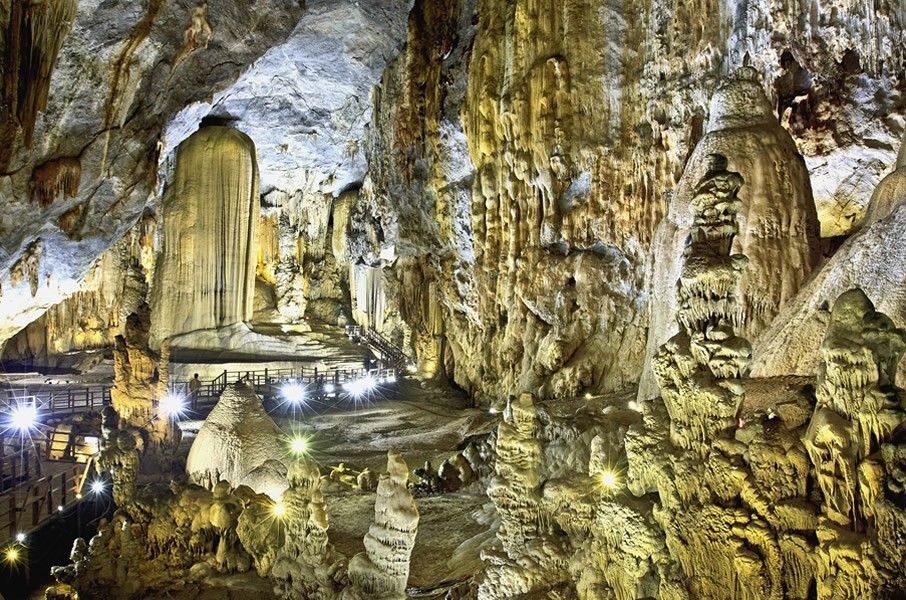 The magnificent beauty of Thien Duong cave - the underground palace

The magnificent beauty of Thien Duong (Paradise) cave always attracts not only domestic but also international tourists. Why does Thien Duong cave have such a strange name? You will understand after reading this article.

An introduction to Thien Duong Cave

Thien Duong cave is located in the world natural heritage site of Phong Nha Ke Bang National Park in Bo Trach district, Quang Binh province. From the center of Dong Hoi city, travel a distance of 75km to the northwest and you will arrive at this place. The cave is about 30km to the north of Phong Nha cave, and the road leading here is very convenient.

Thien Duong cave was discovered in 2005 by a local resident. The reason why it is called “Thien Duong” (Paradise) is because it has a magnificent structure and is fanciful like a paradise. It is noted that the cave used to be surveyed and geologically evaluated by the British Cave Research Association. In 2009, Thien Duong cave was officially exploited for tourism purposes and has quickly become an attractive tourist destination for many tourists coming to Quang Binh.

- The longest dry cave in Asia.

- The dry cave with the most unique system of stalactites and stalagmites.

- The cave with the longest wooden bridge in Asia.

Unlike Phong Nha, Thien Duong is a dry cave with no underground river. The cave has a length of more than 31.4km, a width of about 30-100m, and a height of 60-80m from the bottom to the ceiling, while the widest point of the cave can be up to 150m. The magnificent space of the cave can make you think of an underground palace. 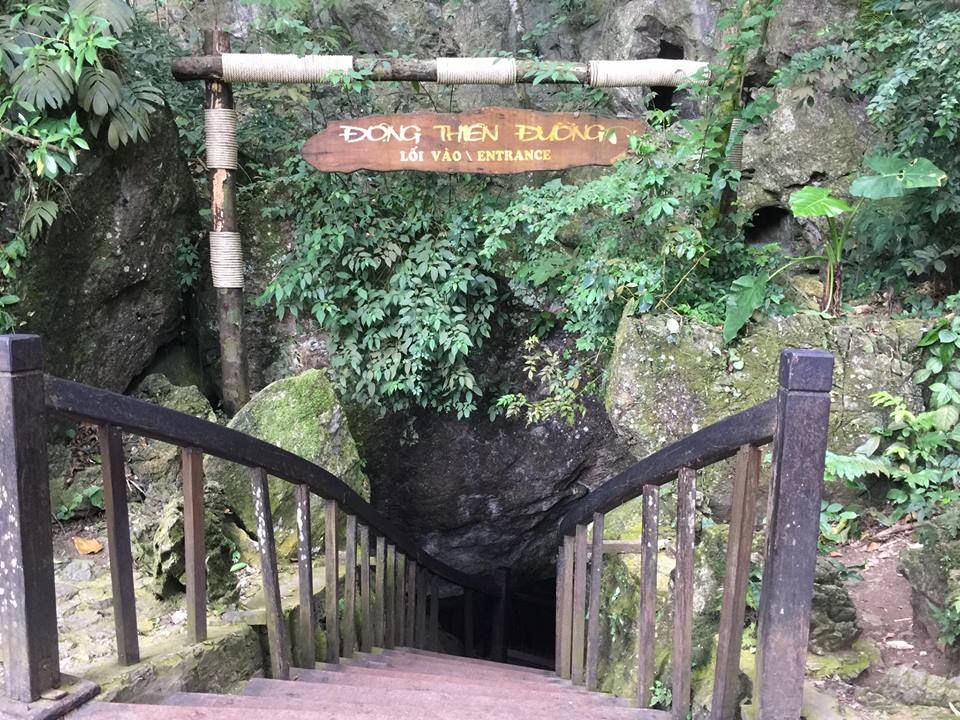 The entrance to Thien Duong cave is very narrow, so only one person can pass through. Photo: Phongnhaexplorer

You will have to go down more than 500 stone steps to the cave entrance, which is located under a limestone mountain with a height of nearly 100m. The road leading to Thien Duong cave is very small (only about three square meters), so only one person can pass through at a time. Standing at the entrance of the cave, you  can immediately feel the cool air blowing out from the cave. There is a slope leading down to the cave floor (with a length of about 15m) with countless large and round stalactites, while the two sides are strewn with stalagmites as if they have just undergone a tectonic shift. 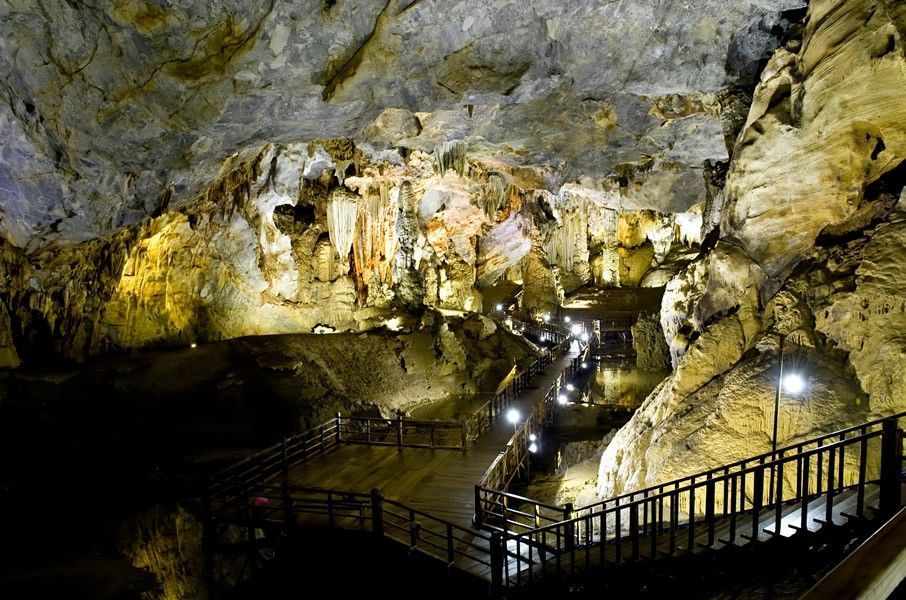 The space inside the cave. Photo: dongthienduong 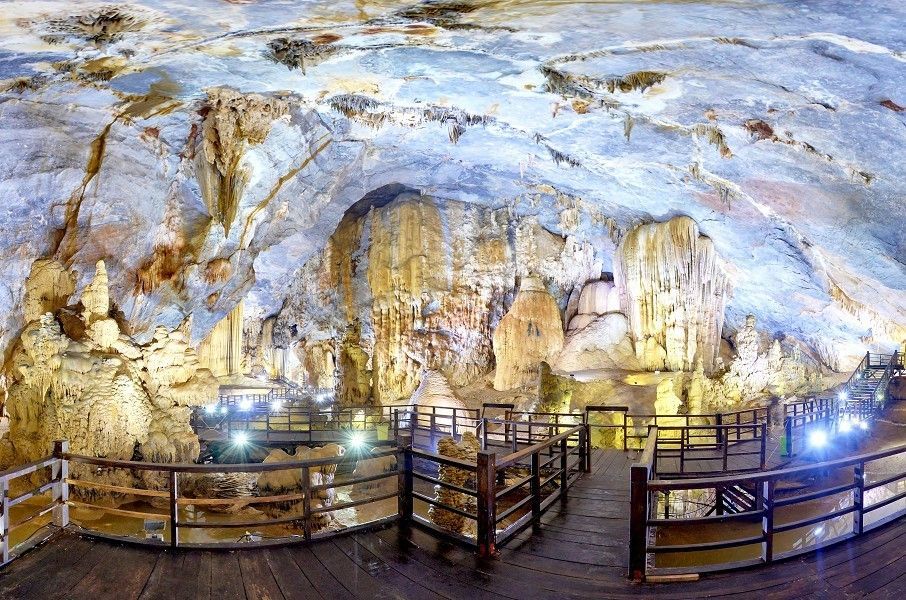 The wooden bridge with a length of 1km leading to the centre of the cave. Photo: dongthienduong

When going deep into the cave, you will be able to feel its grandeur and fanciful beauty due to its height. You can visit Thien Duong cave by walking through a wooden bridge leading to the centre of the cave. As compared to the stalactites of Phong Nha cave, the ones in Thien Duong cave are more diverse in shape, especially the stalactites similar to the image of a communal house or a terraced field - the typical images of the Central Highlands. In addition, there are many isolated stalagmites, creating an impressive structure for the cave. 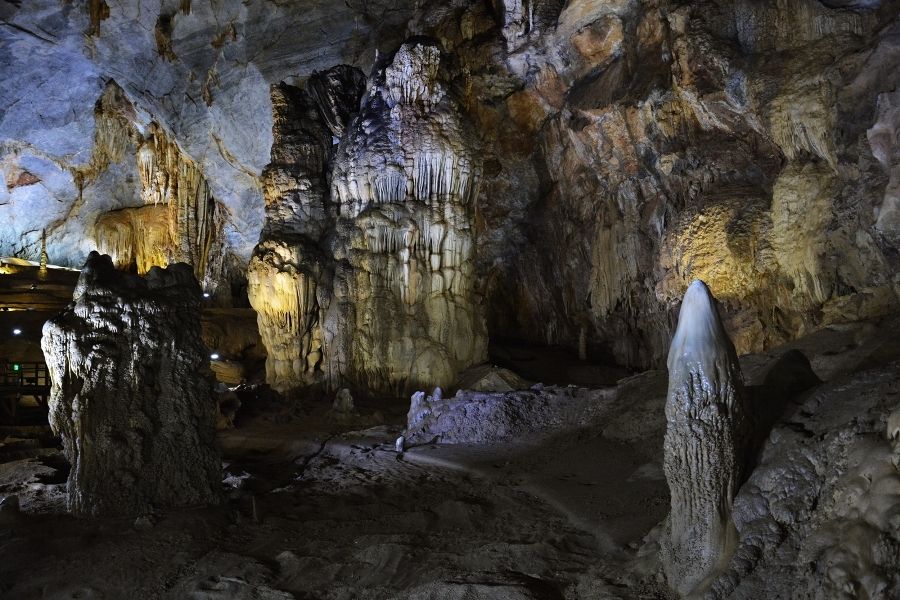 There are many isolated stalagmites. Photo: Vnexpress 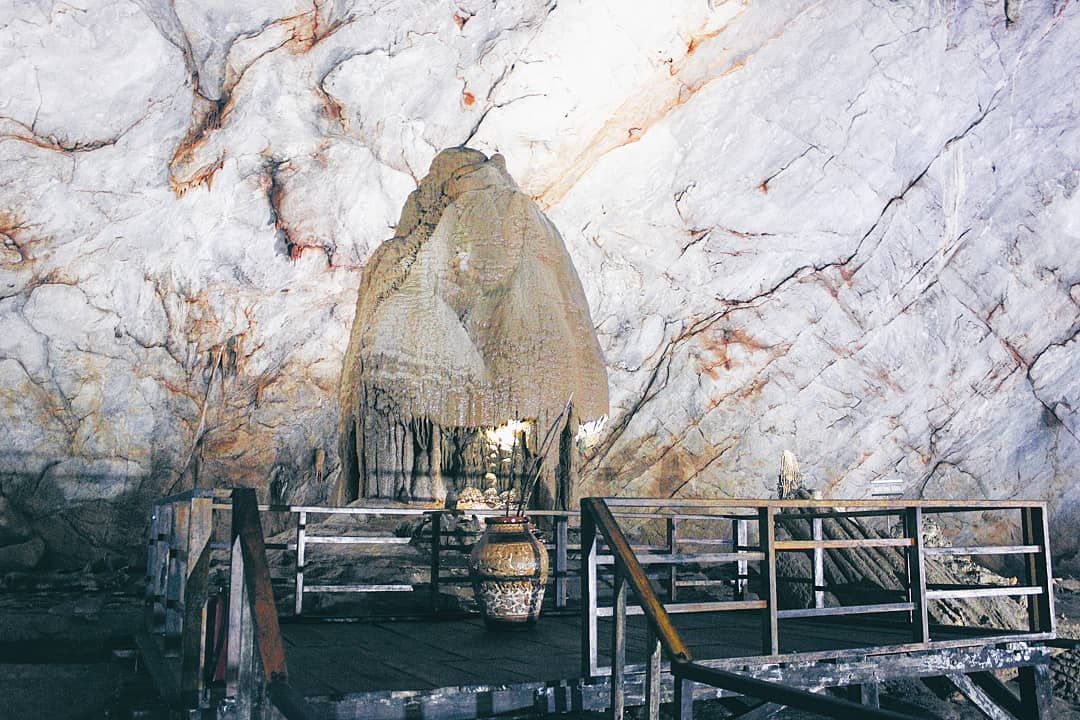 The stalactites in the shape of a communal house in the Central Highlands with a jar of Can wine placed next to it. Photo: @blovender 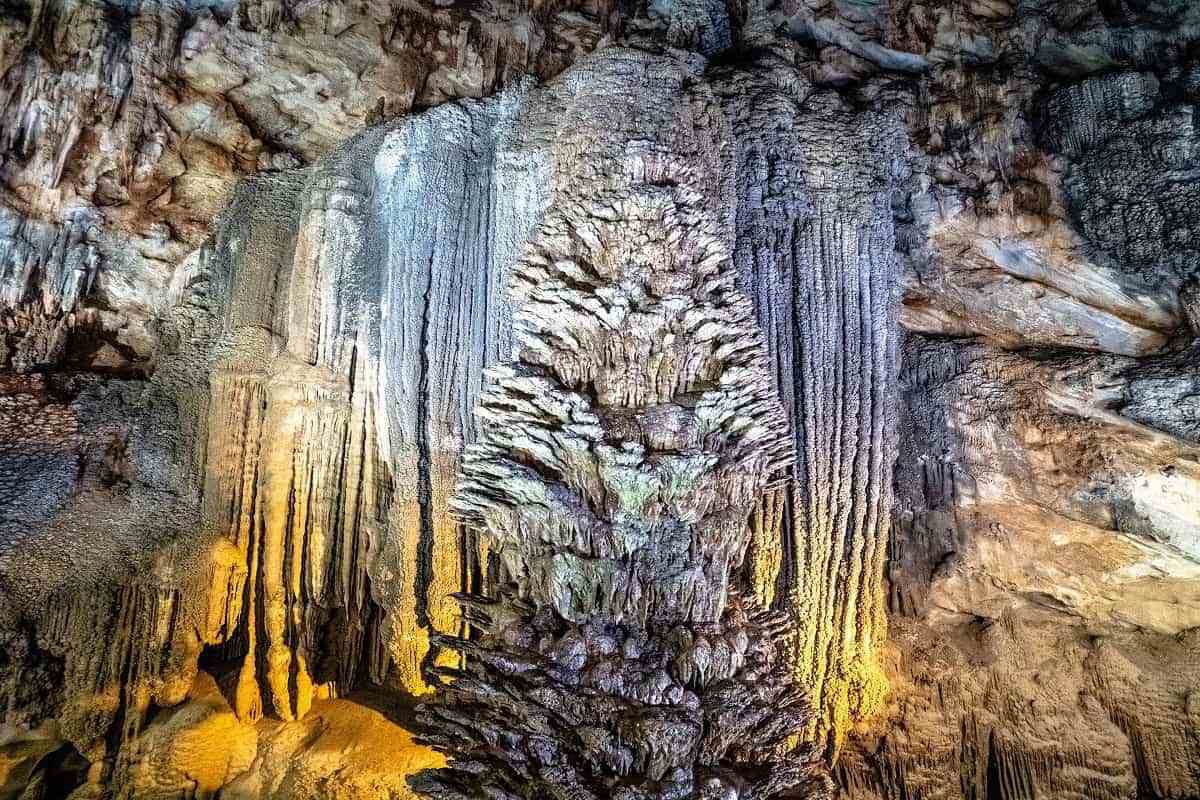 Thien Duong cave has a more diverse system of stalactites than that of Phong Nha cave. Photo: dongthienduong 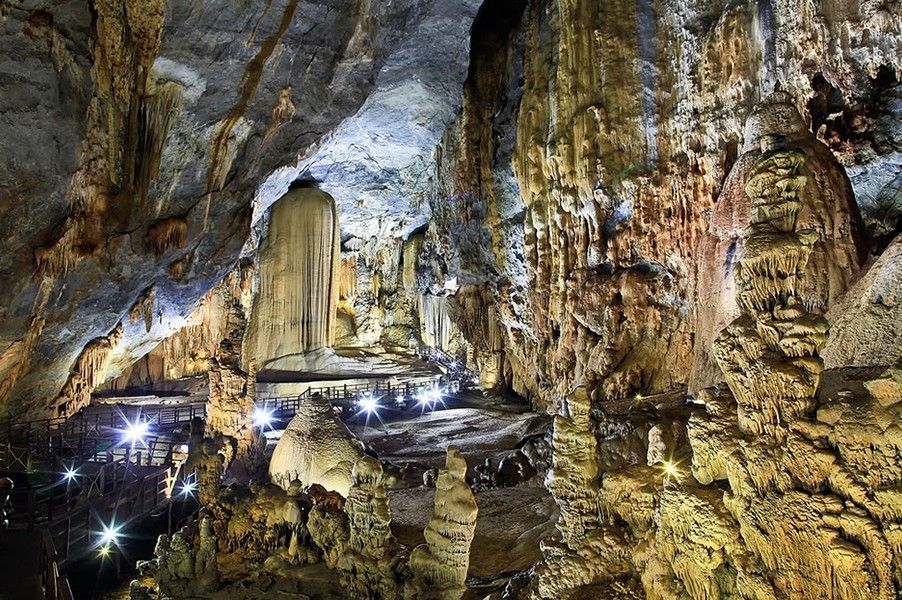 A high-power lighting system is installed in the cave. Photo: dongthienduong

The cave is equipped with high-powered lights yet still cannot illuminate the large space of the cave. Although the cave floor is made of wet soil, it is very flat. During the journey to explore the cave on a 1km wooden bridge, you will sometimes encounter a few stalagmites which seem to be newly formed as they are still wet with steam and when you step on them, you can hear sounds like the breaking sounds under your feet. Under the light of electric lights, these stalagmites look like stars at night. Notably, the temperature inside the cave is always at 20 - 21ºC, so the air is cool and pleasant all year round. 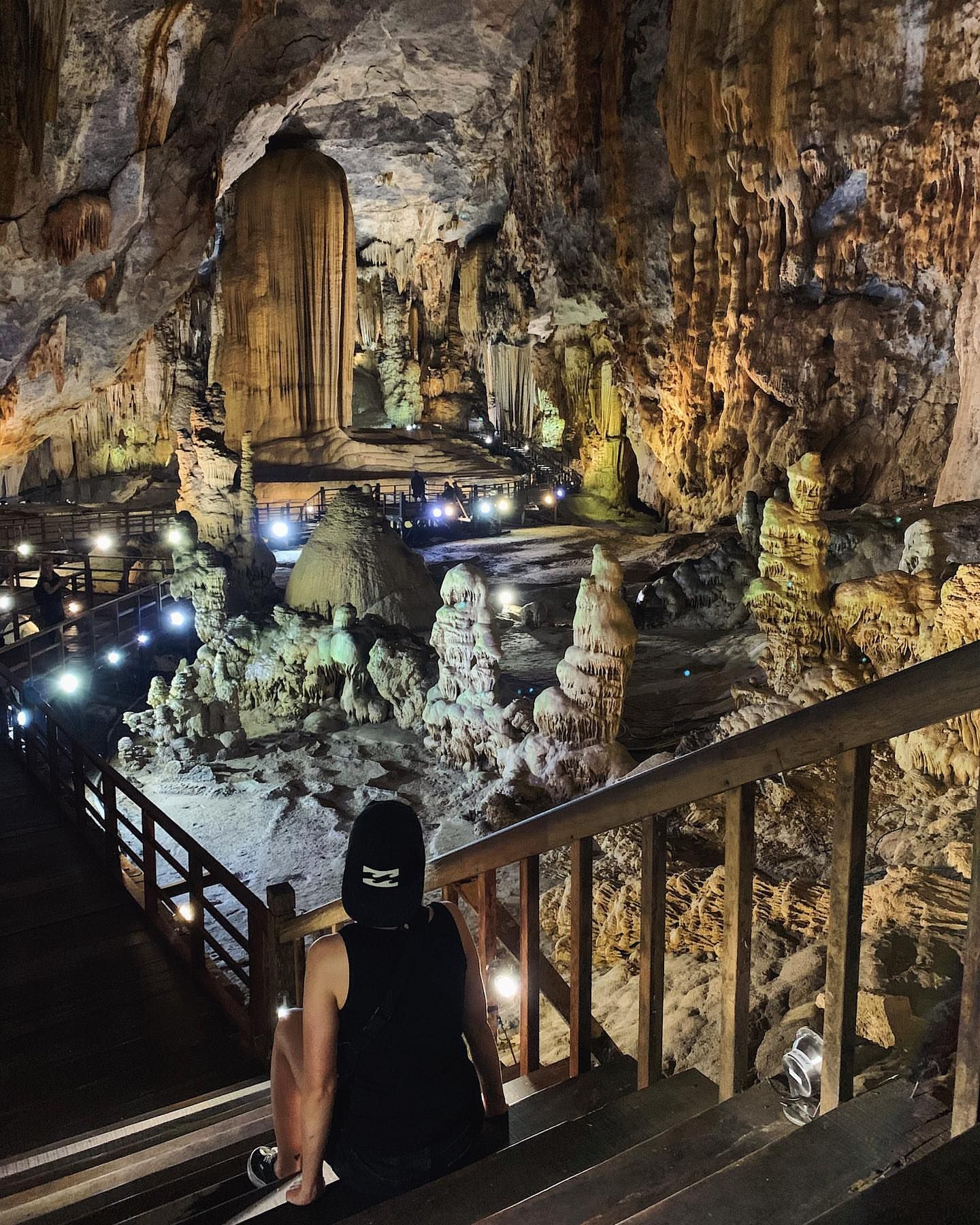 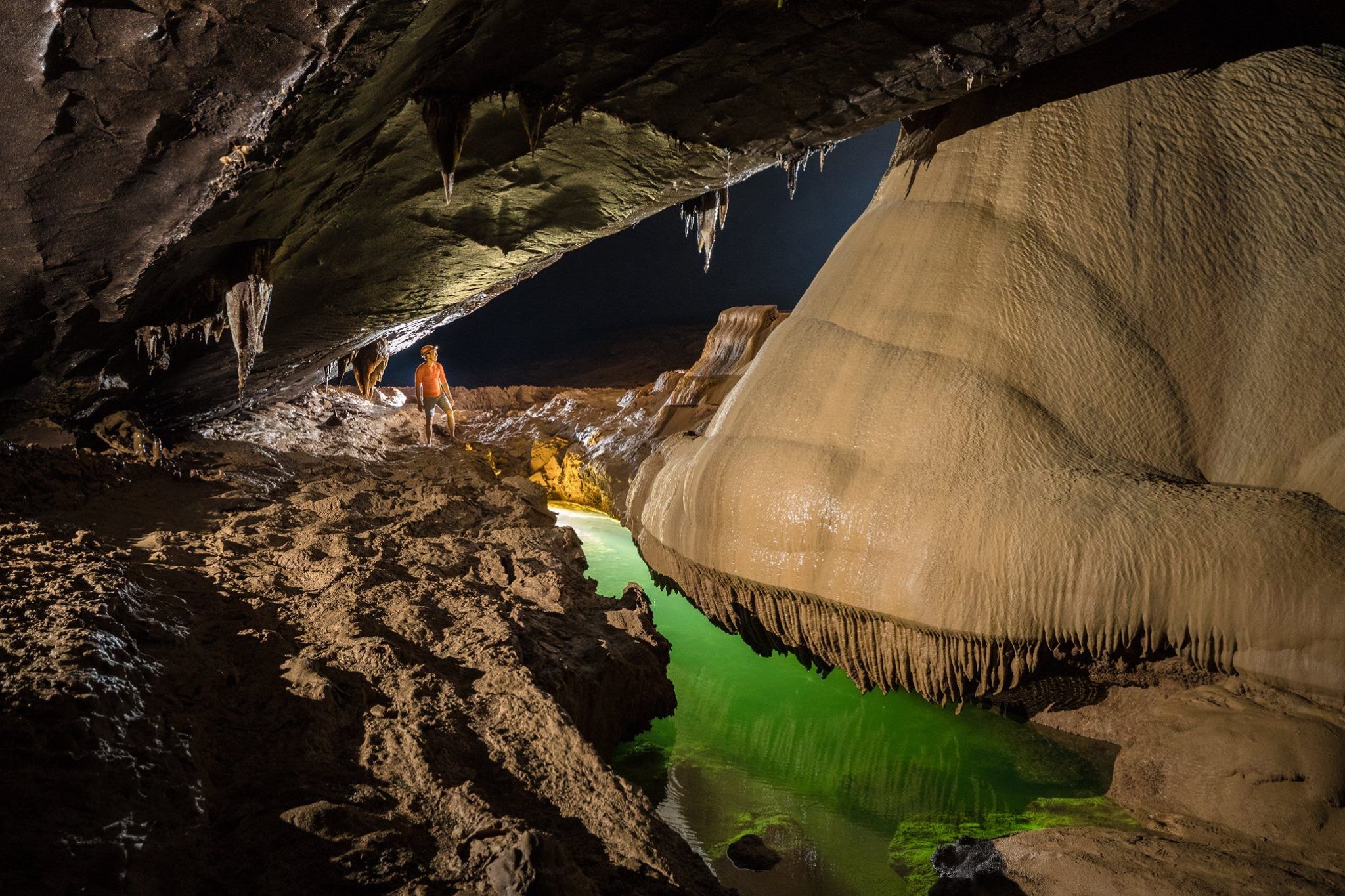 To explore the Thien Duong Cave of 7km, you need to be in good health. Photo: Phongnhaexplorer 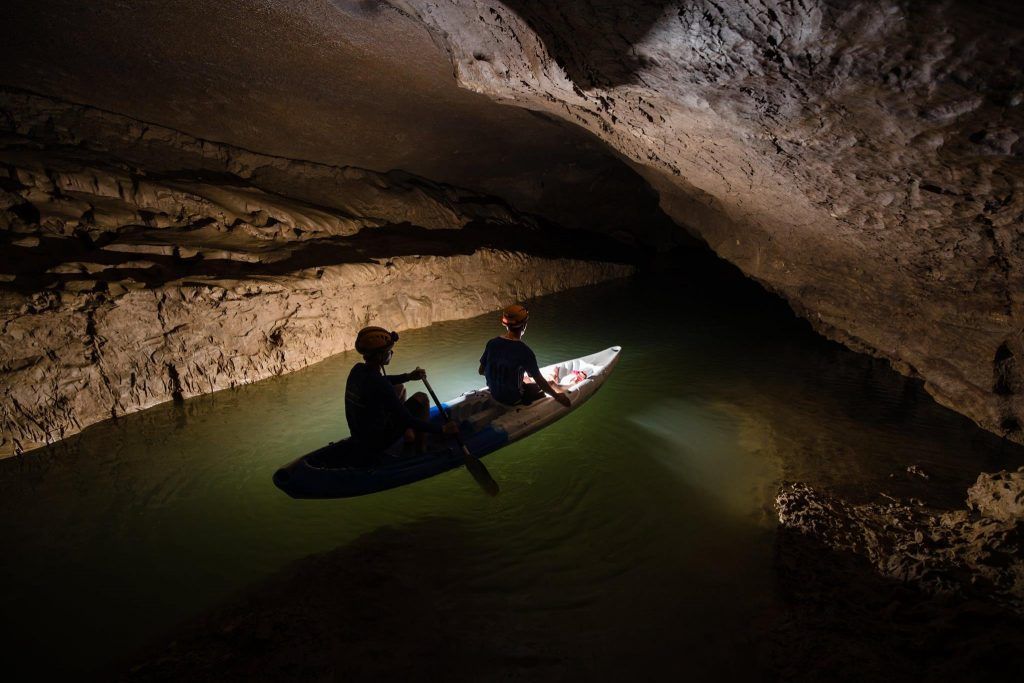 You can experience kayaking to cross the underground stream in the cave. Photo: Phongnhaexplorer

If you are passionate about discovering new things, want to challenge yourself and have good health, you can join in the “discovery tour of Thien Duong Cave of 7km” starting at 8am and finishing at around 4pm. This journey will provide you the opportunity to admire sparkling stalactites: the deeper you go, the more beautiful stalactites - which are diverse in shape and colour - you will encounter. You can kayak to cross the stream, which will definitely be an interesting experience. At the same time, you can test your courage when overcoming the dangerous roads and crossing the shallow streams to reach the Sky Well.

The cost for this tour is VND 2 million/person. 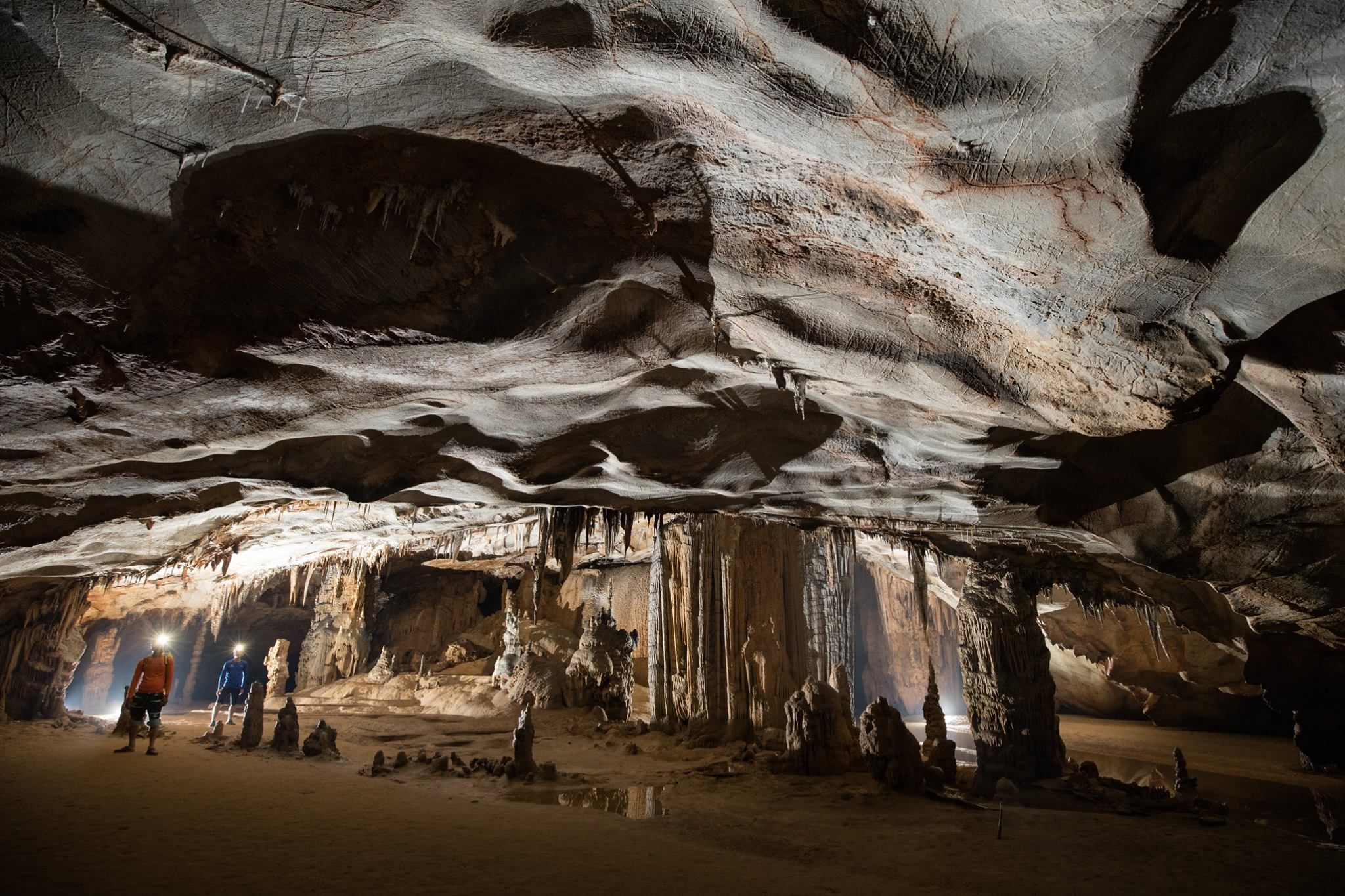 Discovering the cave with a flashlight. Photo: Phongnhaexplorer 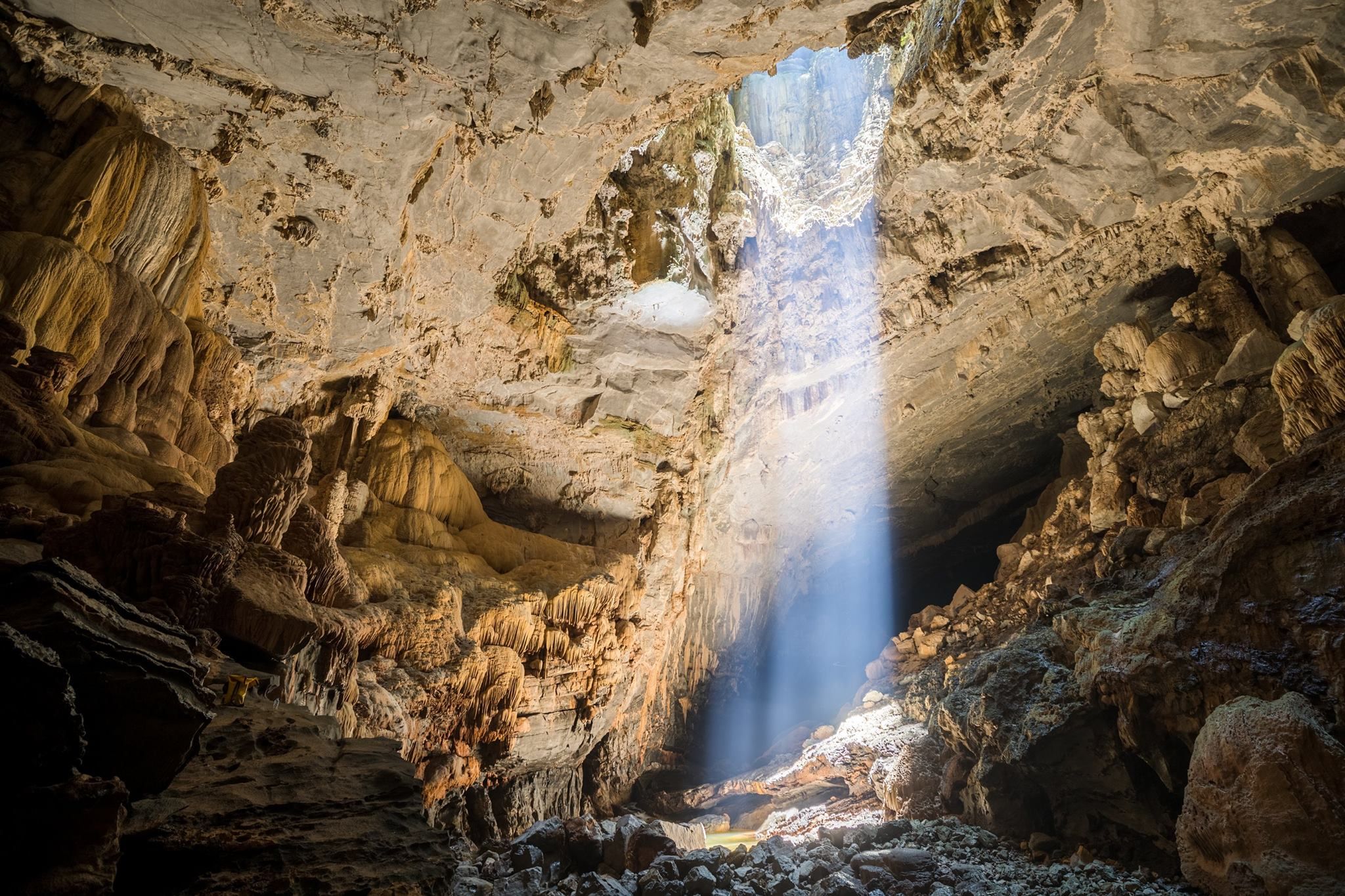 Conquering the Sky Well in the cave. Photo: Phongnhaexplorer 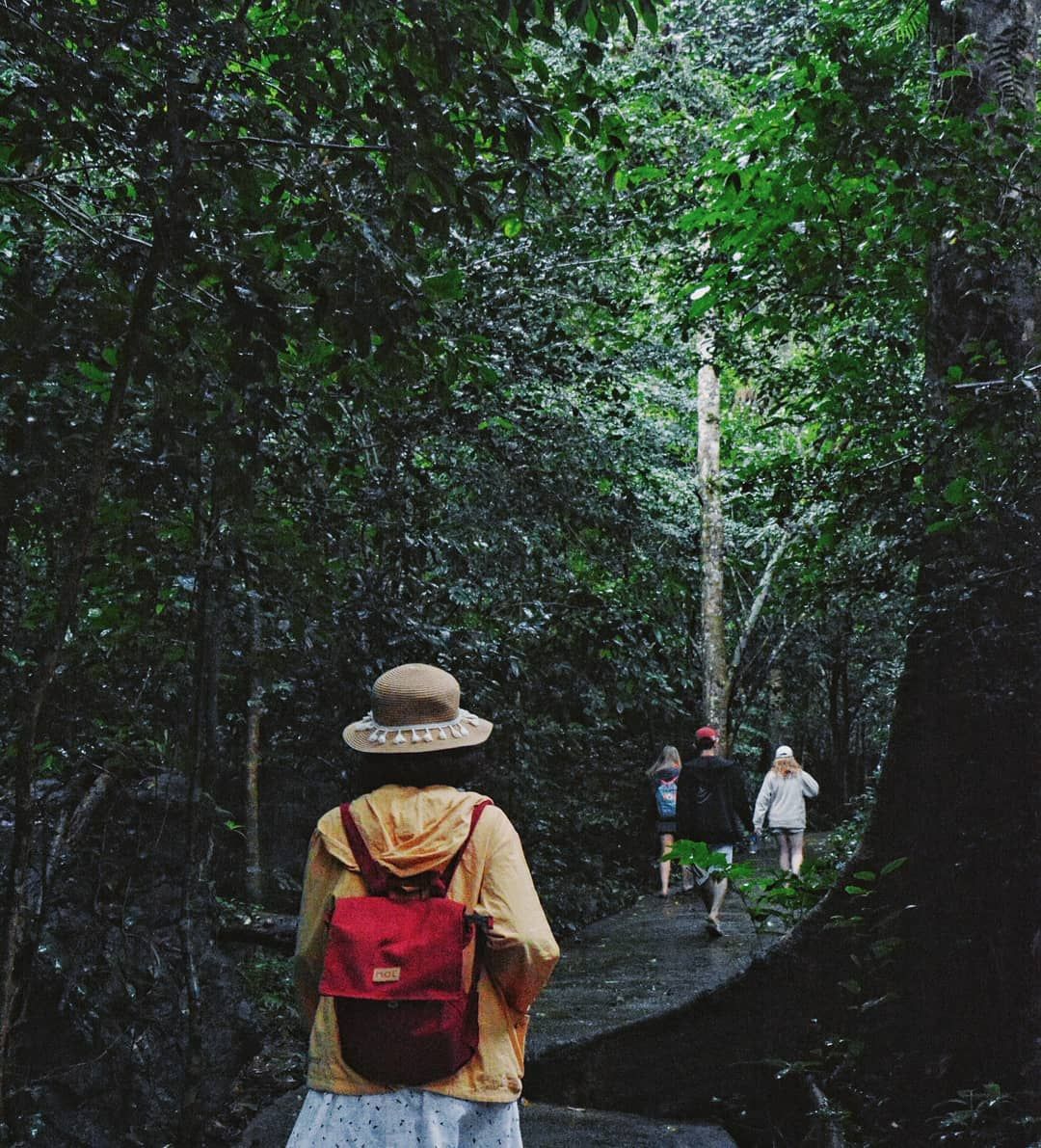 Walking under the green trees to reach the entrance of the cave. Photo: @blovender

From the ticket gate, you will have two options to reach the entrance of the cave, namely walking or traveling by tram. If you choose to walk, you will have to travel a distance of about 3km in about 40 minutes on concrete roads with lush trees on both sides. Otherwise, you can travel by tram with the following costs:

The beauty of Thien Duong cave will definitely surprise you. The magnificence bestowed by nature upon the land of Quang Binh in general and Thien Duong cave in particular is an attractive highlight of Vietnam tourism.