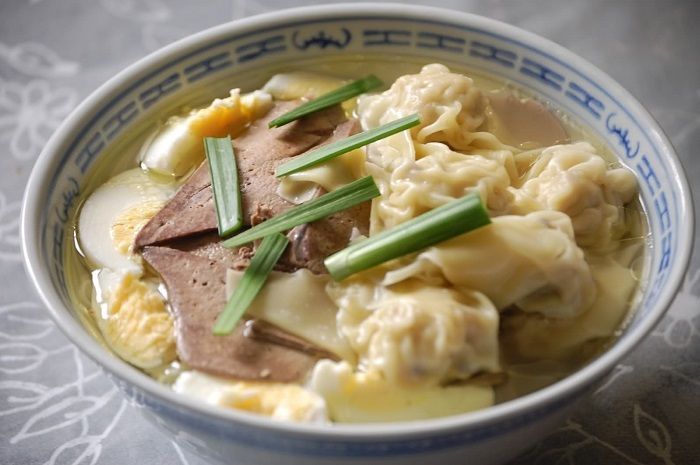 In addition to Cao Lau, Hoi An is famous for these five delicious dishes

Not only does Hoi An attract tourists with its ancient beauty, but it is also famous for many delicious specialties. To somewhat understand the culinary quintessence of this land, you should definitely try dishes such as wonton, bloating fern-shaped cake, sweet soup with corn and so on.

Among the dishes made from rice, bloating fern-shaped cake has really won the hearts of many tourists coming to Hoi An. This cake is very common in provinces of Central Vietnam, especially in Hue, however, in each region, the filling will be somewhat different.

Hoi An bloating fern-shaped cake consists of two parts, namely the base and the filling. The former part is made from pureed rice flour, mixed with water, then filtered thoroughly, put in a small bowl and steamed until cooked. It is noted that if the rice is pounded by hand, the flour will be more fragrant. To make the filling, marinate shrimp and pork mince with spices, then stir-fry them and put the cooked toppings on the cake base. 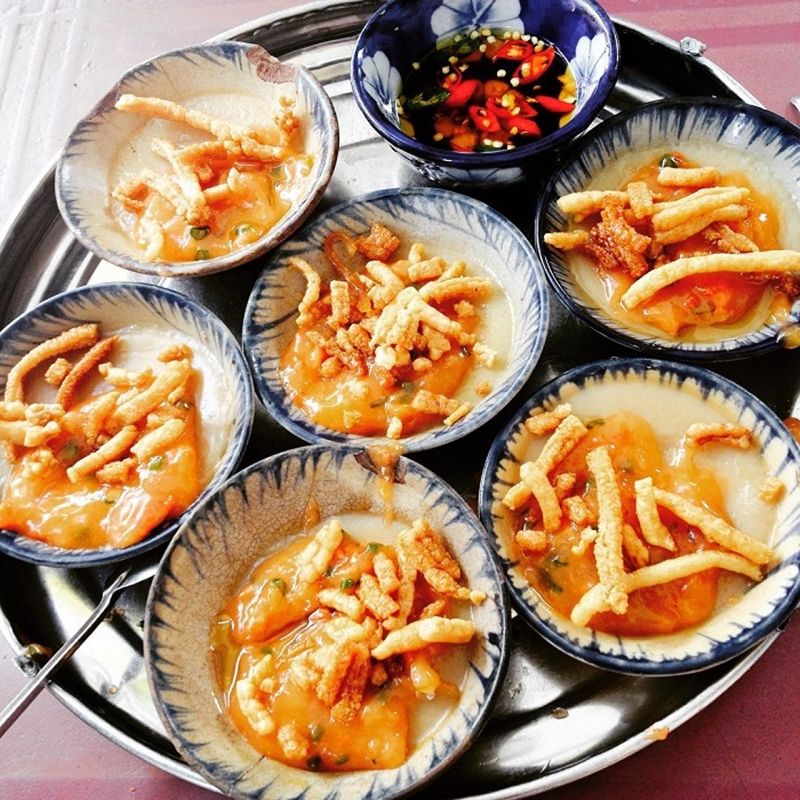 In Hoi An, people do not use chopsticks or forks to eat this cake, but use a small bamboo stick shaped like a blade, which is called a “bamboo knife”. It is this unique way of eating that makes a difference for Hoi An's bloating fern-shaped cake as compared to those in other regions. The cake is served with fish sauce, but you can add some hot chili to enhance the flavour. The combination of the chewiness of the cake, the rich taste of shrimp and pork, mixed with sweet and sour fish sauce will definitely impress you right from the first bite. 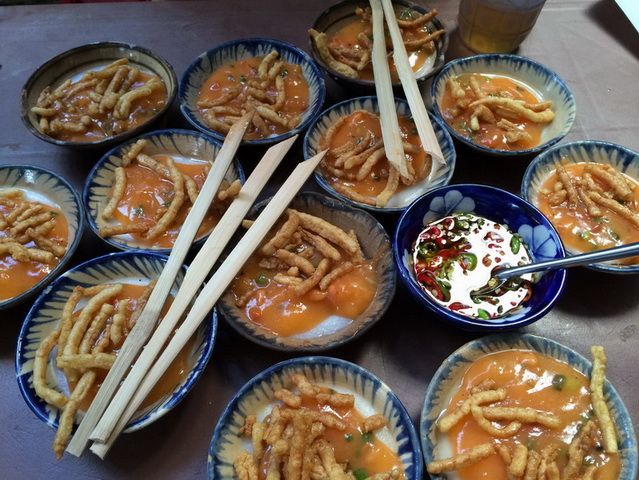 In Hoi An, you will use a small bamboo stick shaped like a blade, which is called a “bamboo knife”, to eat the cake. Photo: vietfuntravel.com.vn

Originating from China, wonton is a dish that appeared in Hoi An from the 17th to 18th centuries when it was still an international trading port - a “convergence place” for Japanese, Chinese and Western merchant ships. Over time, this dish has been modified to better suit the taste of Vietnamese people and gradually becomes a quintessence of Hoi An cuisine. 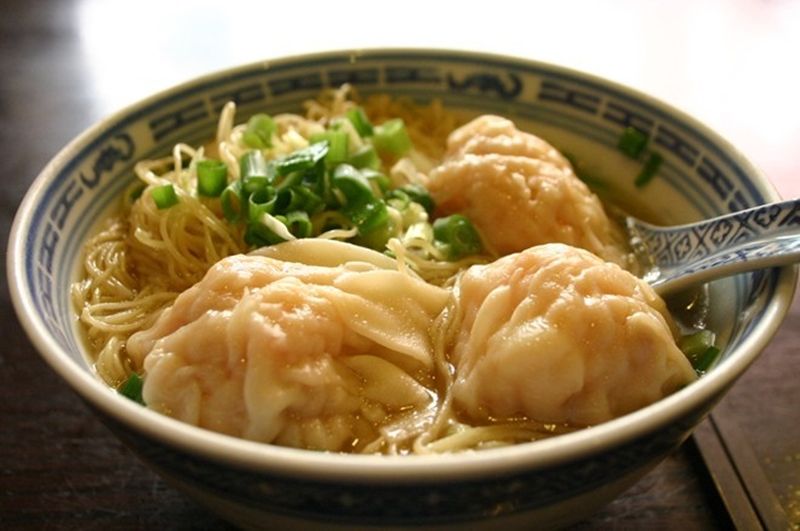 Hoi An wontons have many types such as wonton soup, fried wontons and wonton noodles, each of which has its own taste and is elaborately prepared. In general, no matter which type of wonton, they all have one thing in common - the crust and the filling. The former part is made from flour mixed with chicken eggs, then thinly rolled and cut into small pieces with a diameter of about 10cm. To make the filling, shrimps (usually greasyback shrimp) are cleaned, peeled, put in a mortar and pounded, then marinated with spices. Next, put the filling into the crust and wrap it so that the edges of the crust stick together tightly. 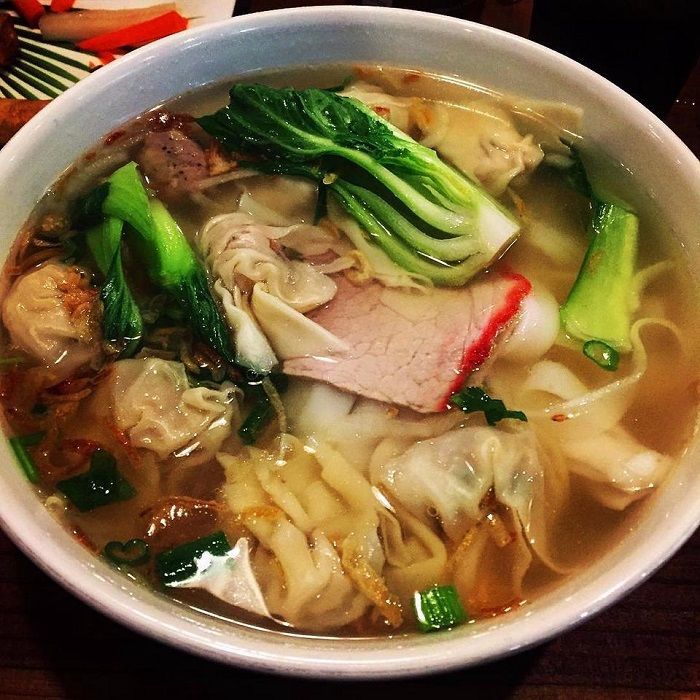 For wonton soup, the broth will be stewed from pork bones with some straw mushrooms to create the sweetness. Meanwhile, fried wonton - which is rolled into a square or triangle, then deep-fried to create a crispy crust - is favoured by many diners in cold weather. You can eat fried wontons with a sauce made from tomatoes and mashed potatoes. 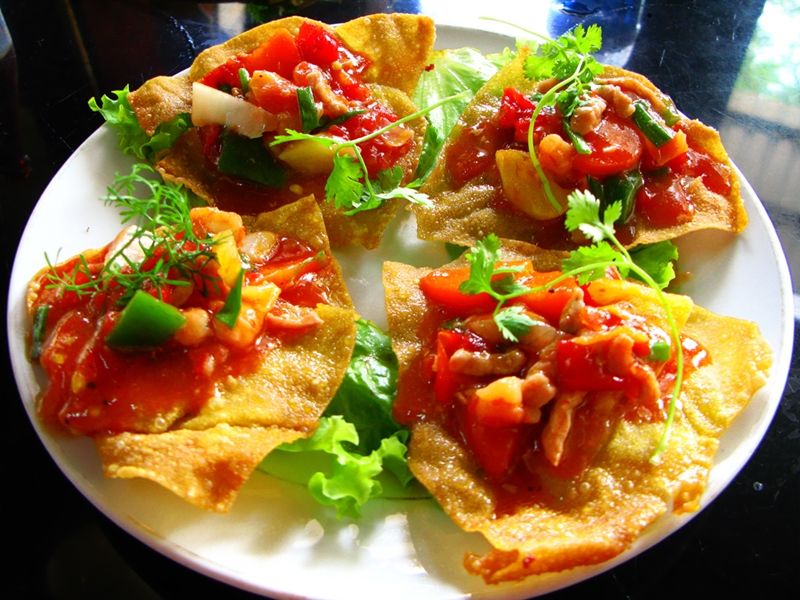 Wonton noodles are quite similar to wonton soup, but the latter dish does not include noodles. It is noted that the noodles are made from wheat flour and have fibers as thin as a thread, then they are boiled and put in a bowl of wonton and poured with broth. 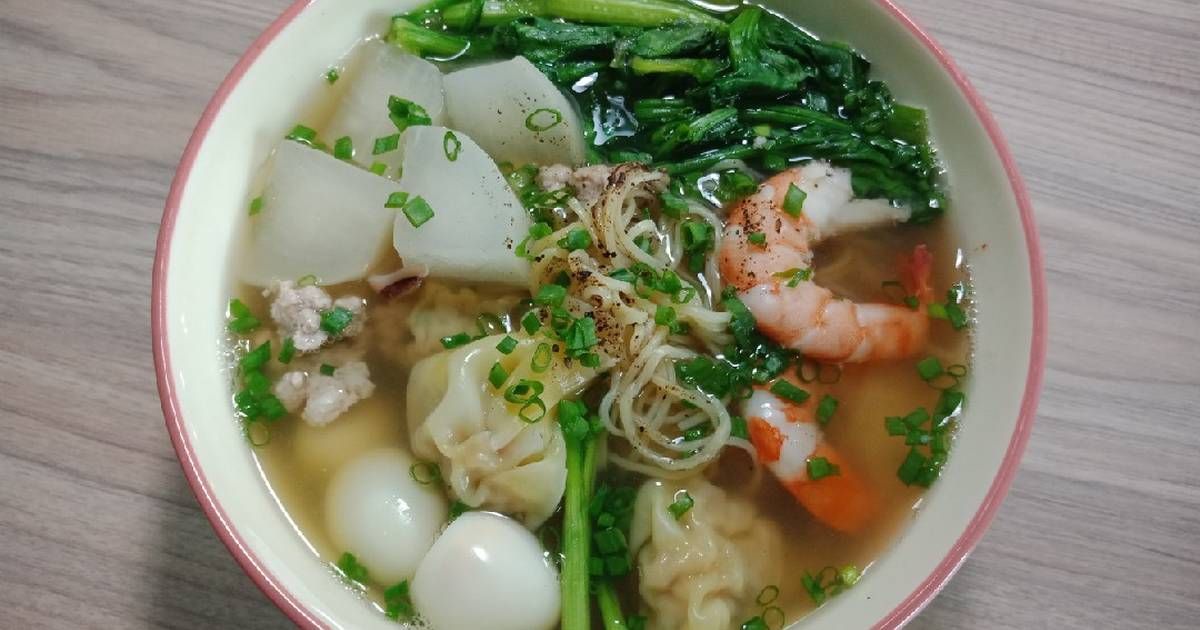 Sweet soup with corn, which is a very famous dessert in Hoi An, is made from the famous Cam Nam corn of this region. The dish has a natural light sweetness and fragrance from newly harvested corn. 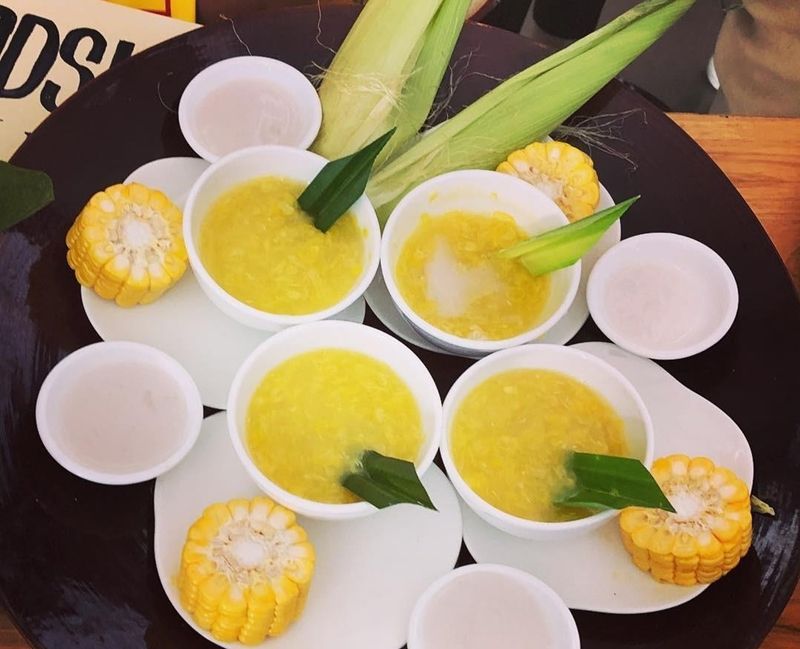 The tasty sweet soup with corn of Hoi An. Photo: vncooking.com

Firstly, the husks and silks of fresh corn are separated, cleaned and boiled to get the sweet and fragrant boiled corn water. Next, boil the kernels (in the pot of boiled corn water), add sugar and simmer until they are soft and absorb the sweetness, and finally, add tapioca flour and stir the mixture until the soup is thick.

A standard bowl of Hoi An sweet soup with corn has a smooth and transparent soup with the bright yellow colour of young corn kernels. To enhance flavours for the sweet soup, people often add some greasy and viscous coconut milk on top. When eating, you have to mix the soup with coconut milk to raise the aroma. 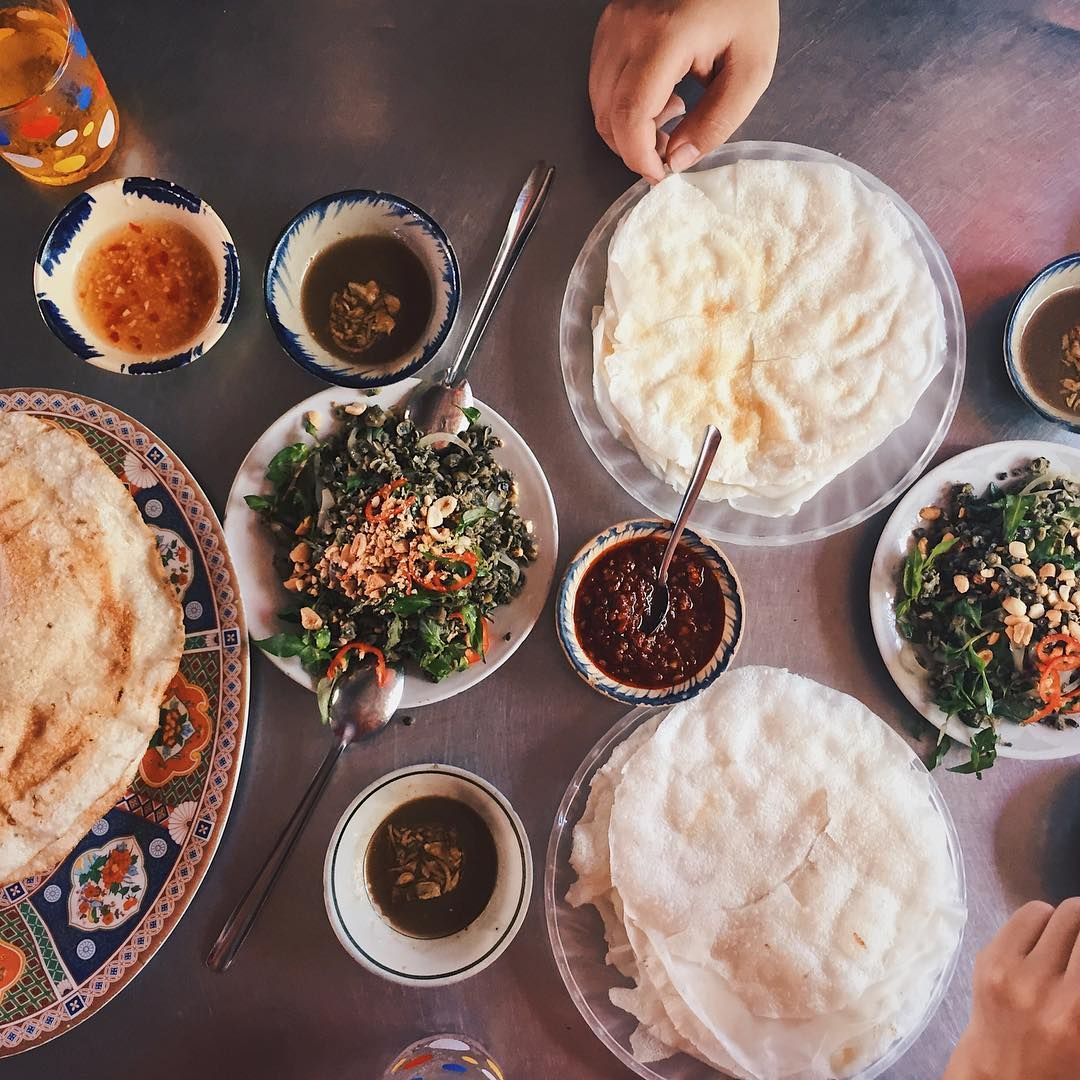 Crushed rice crackers with stir-fried mussels is a specialty of Hoi An. Photo: bloganchoi

Crushed rice crackers with stir-fried mussels originated from the Con Hen area, which is in the south of Hoi An ancient town. In Vietnamese, the dish’s name implies that the cake must be “pressed” before being eaten. The dish is a combination of steamed thin rice pancakes, rice papers, dipping sauces and a plate of stir-fried mussels seasoned to taste.

To make this dish, spread a layer of pureed mung beans on the surface of a steamed thin rice pancake, then place it between two pieces of grilled rice paper and use your hands to press these two pieces to make them stick to each other. You must be careful to make the steamed thin rice pancake adhere to the grilled rice paper, while preventing the two outer layers from being broken.

After being cleaned, the mussels are stir-fried with hot chili, shallots, peanuts, and Vietnamese coriander to reduce the fishy smell. The cooked mussels are put on a small plate and eaten with crushed rice crackers to raise the fatty taste. 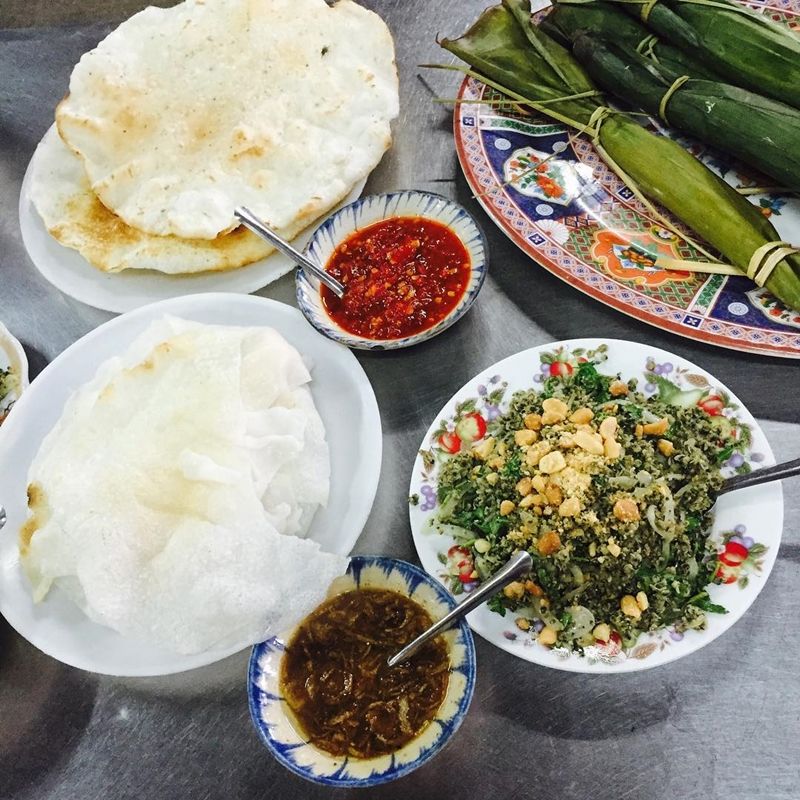 A serving of crushed rice crackers with stir-fried mussels in Hoi An. Photo: chudu24.com

When eating, you will have to break the cake in half, then dip it with fish sauce - which is made from sugar, fried shallots, minced pineapple, garlic and green chili peppers - and enjoy with fried mussels. This dish has the crispiness of grilled rice paper, the chewiness of  steamed thin rice pancake, the richness of stir-fried mussels, and the sweet and sour taste of dipping sauce. 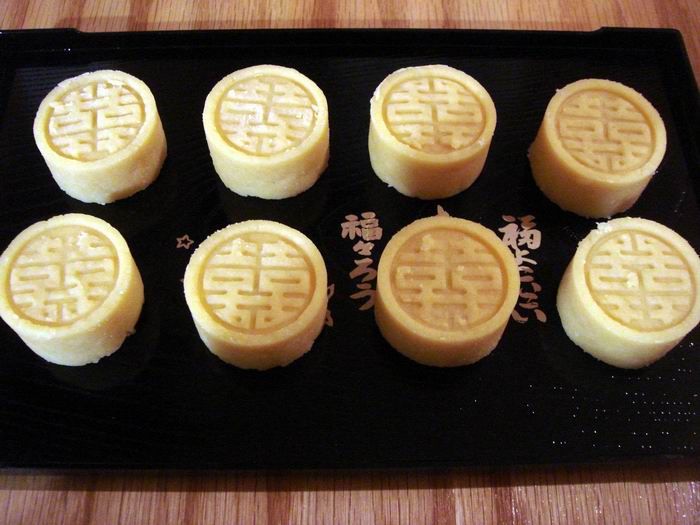 Hoi An mung bean cake has a typical round shape. Photo: tuannguyentravel

Unlike the mung bean cakes in other regions of Vietnam, in Hoi An, the cake when compressed into shape will not be steamed as usual, but must be baked. At the same time,  while the common mung bean cakes have no filling, the one in Hoi An has a filling made of lard. 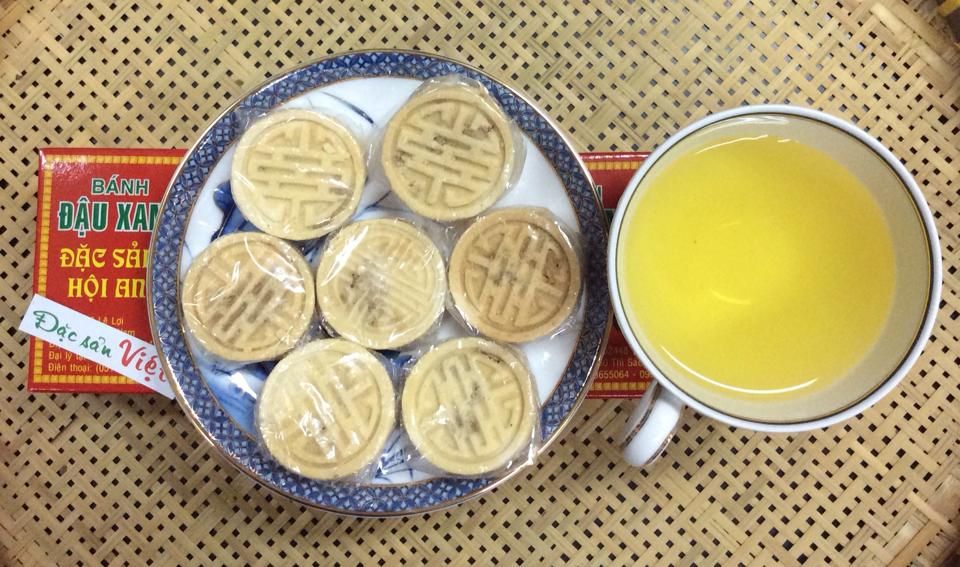 Mung beans (the type with small seeds and yellow in colour) are soaked, washed, peeled and boiled until well-cooked. Next, put the cooked mung beans in a mortar to grind them into powder, then knead it with an appropriate amount of sugar water to balance the moisture and leave the dough overnight to dry it. As for the filling, the lard is fried until it has a golden colour, then mixed with sugar, salt and pepper. 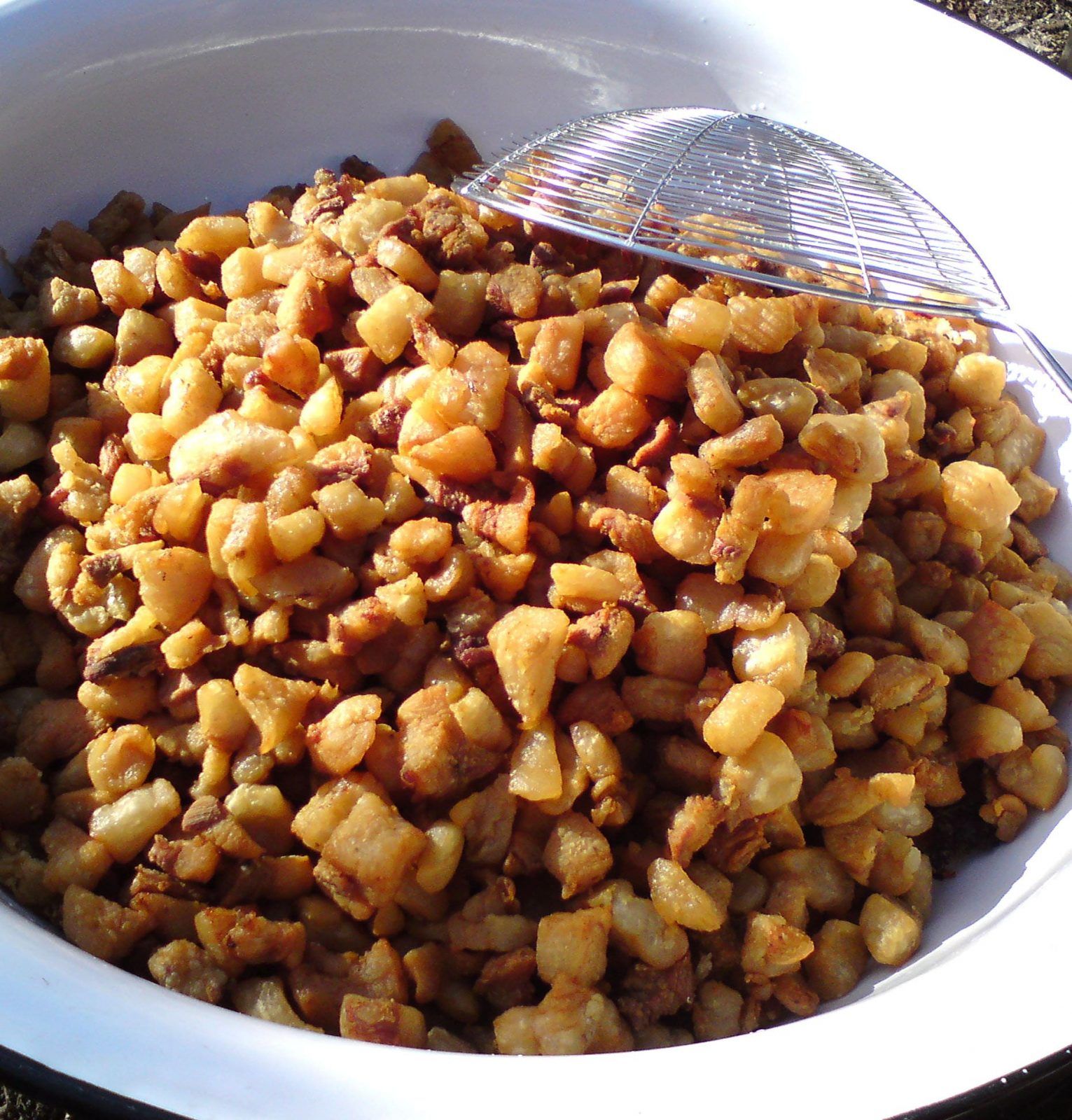 The final step is to compress the cake by a round or square mold. Put the dough into a mold with a layer of filling in the middle, press it tightly, then turn the mold over and tap the bottom of the mold to remove the cake. Finally, the cake is baked to create the crispness and fragrance. The baked mung bean cake has a letter of swastika on its surface and could be kept for a long time due to being carefully dried and packaged.

When coming to Hoi An, you should definitely enjoy the five above-mentioned famous street foods to better understand the culinary quintessence of this land. The unique taste of those specialties will surely steal your heart from the first bite.