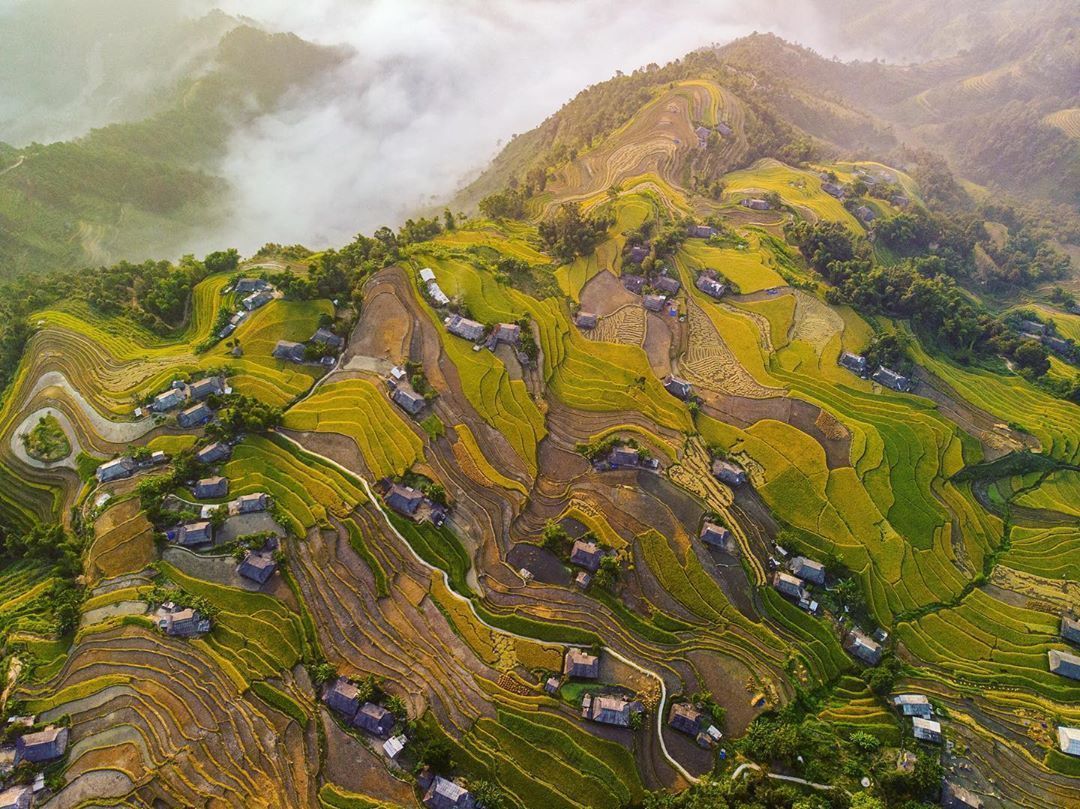 Ha Giang not only has majestic and unspoiled nature, but it also fascinates visitors with picturesque terraced fields, of which Hoang Su Phi is home to, that attract many tourists due to their romantic beauty in the ripe rice season.

Where is Hoang Su Phi?

Hoang Su Phi is a district in the west of Ha Giang province, which used to be a part of Tuyen Quang province. In 1906, Hoang Su Phi district was established with two cantons, namely Tu Nhan and Xi Man, but in 1965 this district was divided into two smaller districts, which are Hoang Su Phi and Xin Man. Currently, Hoang Su Phi has one town and 24 communes, including 4 border communes with a total length of the border line of more than 40km. 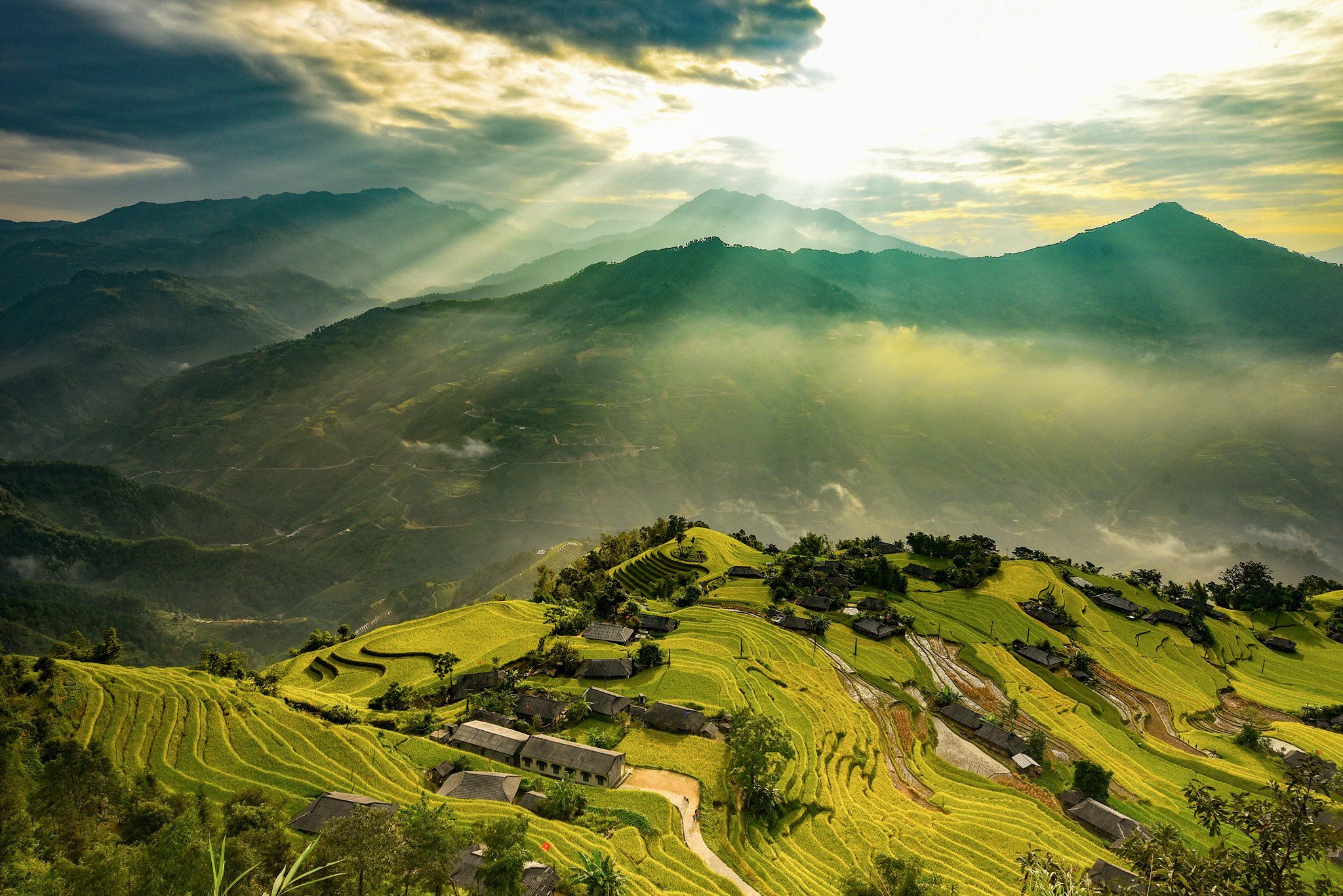 Hoang Su Phi features hilly terrain with steep slopes divided by streams. This district is located on the upstream of the Chay river, where 12 ethnic groups choose to settle down, mainly the Mong, Tay, Dao, Nung and La Chi. Due to its location on the road connecting the East and Northwest regions of Vietnam, the scenery of Hoang Su Phi is very majestic with mountains, forests and especially stretching terraced fields. 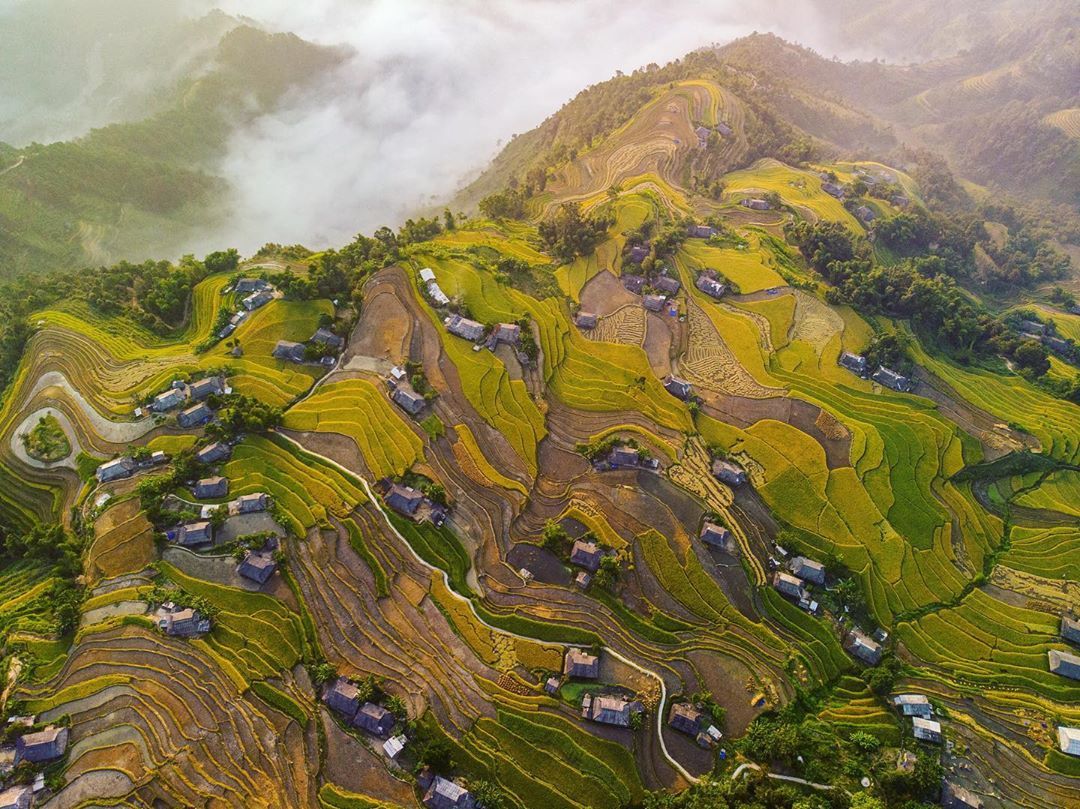 When traveling to Ha Giang, you have to pass through “Heaven Gate” at the Landmark KM17 on the route Bac Quang - Hoang Su Phi with an immense space. You will  be able to see the Tay Con Linh mountain range nestled in the mist, the primeval forests interspersed between the tributaries at the headwaters of the Chay and Bac rivers, the ancient tea fields of San Tuyet, and the vast terraced fields on the mountain slopes. 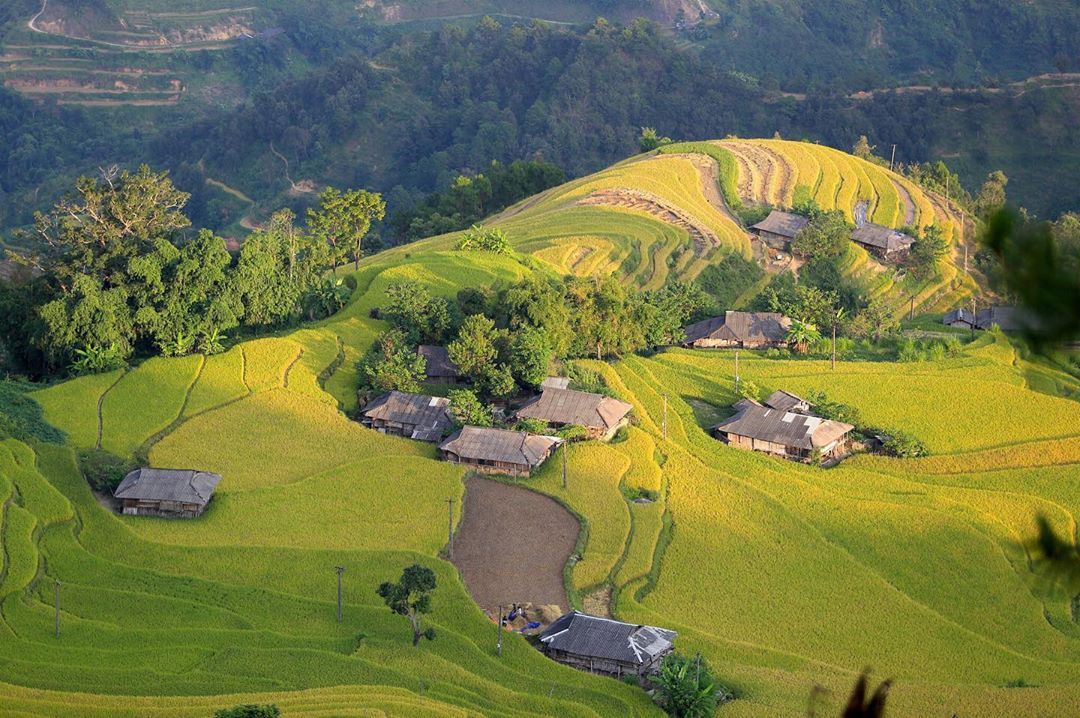 The whole district of Hoang Su Phi has about 3,000 hectares of terraced fields spreading across the hills and mountains. No one knows exactly when these fields appeared, but the locals estimate that the terraced fields have existed for hundreds of years. These special fields not only bring prosperity to the local people, but they also “draw” a beautiful picture of nature in the ripe rice season. Due to regional severe weather conditions, you can only admire the beauty of Hoang Su Phi in the "golden season" once a year around September and October. The terraced fields in Hoang Su Phi were recognized as a National Monument in 2012.

You can enjoy the beautiful terraced fields in Hoang Su Phi at some places as follows: 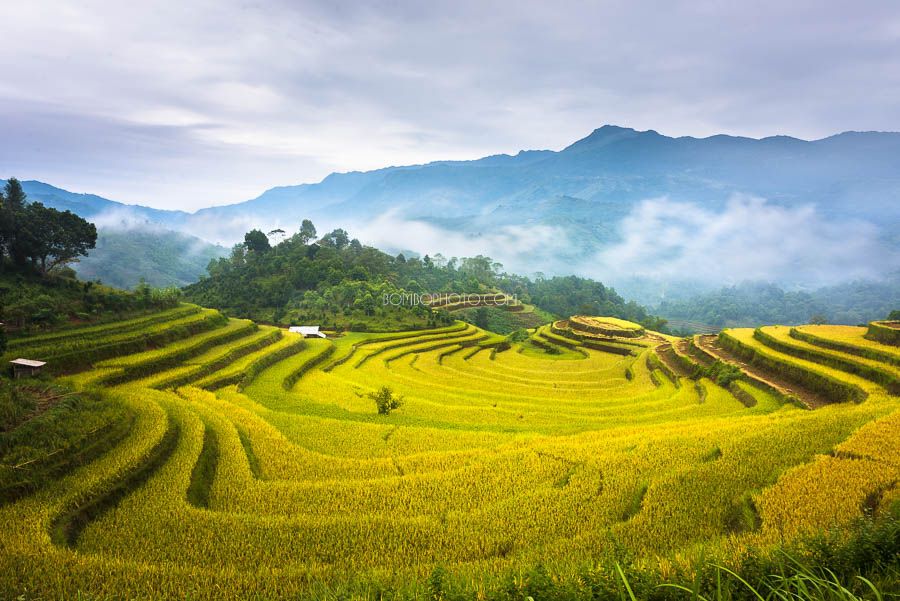 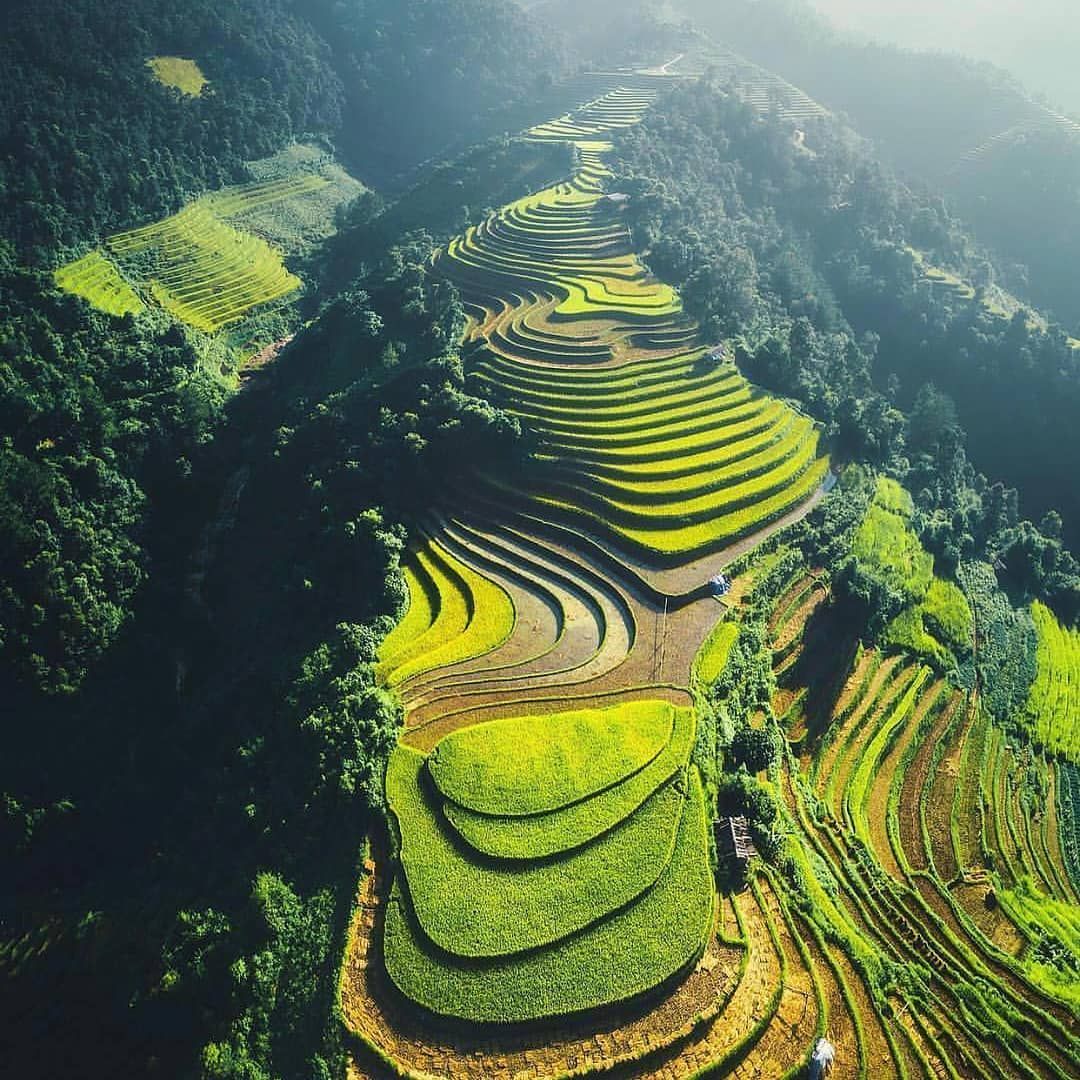 Ho Thau is a commune of Hoang Su Phi with an area of 53.08 km2, which is about 18km from Nam Dich commune. The immense terraced fields in Ho Thau, which are mainly cultivated by Dao Do people, attract tourists thanks to the large hills without being steep as compared to those in other places. The locals always leave a small area of forest around the field to avoid landslides. 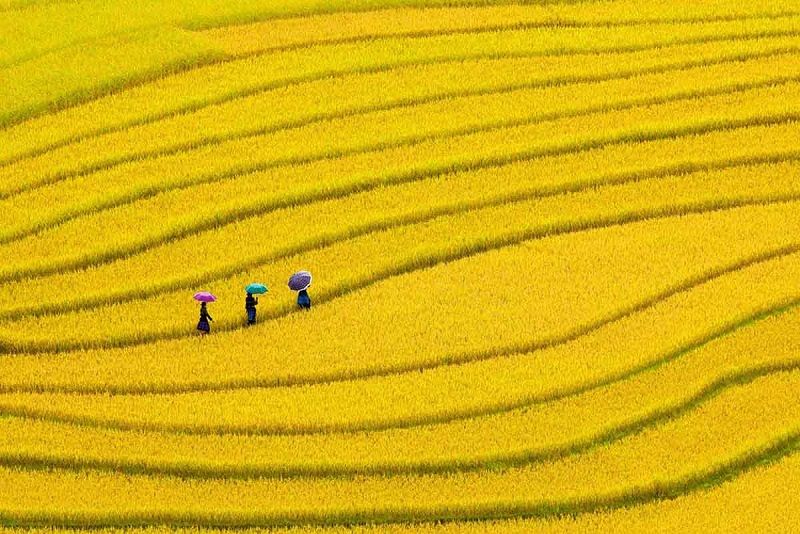 Thanks to the mountainous terrain with a moderate level of steepness, Ban Luoc and San Sa Ho communes have many terraced fields, which are mainly in the shape of bows and waves. The Nung and Dao Ao Dai are two ethnic groups cultivating the fields in these two communes. 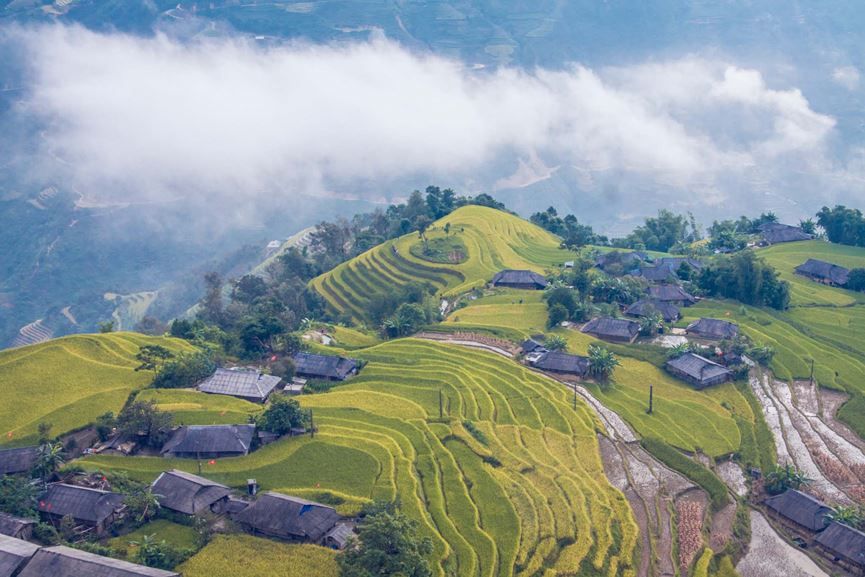 The terraced fields in Ban Phung commune are located on steep slopes rather than in wide valleys like Muong Hoa (Lao Cai) or Cao Pha (Yen Bai), which winds from the middle to the foot of the mountain. On the “natural picture” of terraced fields, you can see the houses of the La Chi people - the ethnic group that cultivates rice in Ban Phung.

A unique feature in the farming method of the La Chi people is that when they start planting rice, fish (such as mud carp or common carp) is often released into the field to catch bugs and insects, and the rice season is also the time to harvest fish.

In winter, Ban Phung is as beautiful as a white river covered with fog. While there are romantic apricot and peach blossoms in spring, autumn brings the commune the golden terraced fields in the ripe rice season, which can easily fascinate visitors. 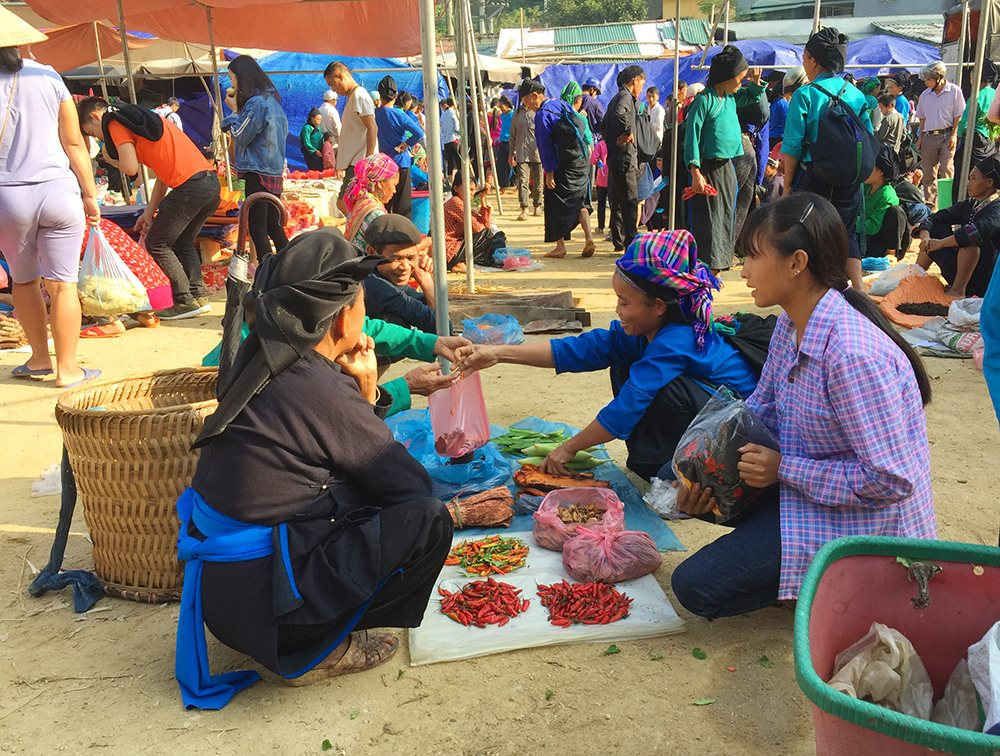 When coming to Hoang Su Phi, you should visit the market in the center of the district, which is not only a place for trading activities, but it also helps to preserve the unique cultural beauty of the highland market.

The market is open every Sunday morning. At 8am, the main streets of the district are packed with a lot of buyers and sellers, who are mainly the Tay, Nung, La Chi, Mong and Dao people. For the people in remote places such as Nam Ty or San Xa Ho commune, they have to leave their home at 3am and pass through dozens of kilometers to reach the market. Notably, they often bring products grown in their garden or taken in the forest to the market to sell, such as vegetables, chicken, brocade, and the typical spice of the Northwest region called “mac khen”.

Coming to Hoang Su Phi market, you can also see impressive colorful costumes from the many different highland ethnic groups. 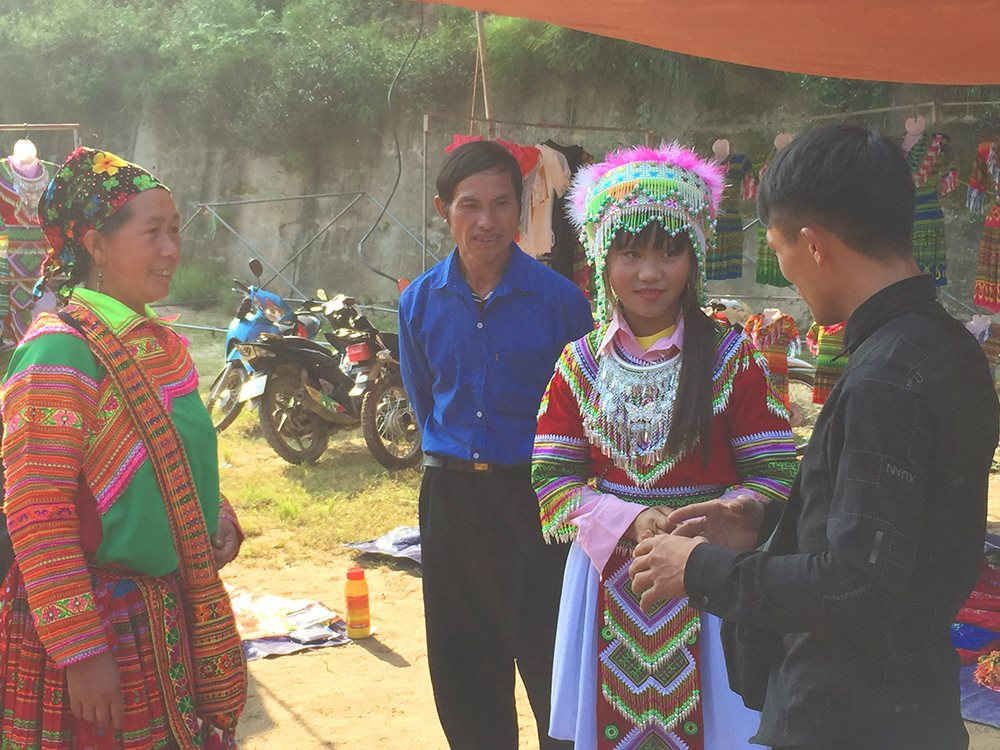 Traveling to and staying in Hoang Su Phi 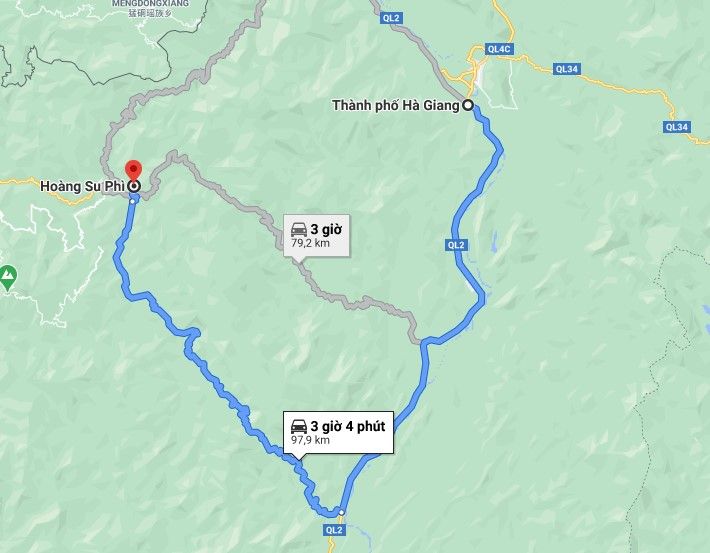 The direction from Ha Giang city to Hoang Su Phi.

From Hanoi to Hoang Su Phi (Ha Giang), you can travel by coach with a distance of about 300km, a travel time of about 6 hours, and the ticket price of about VND 200,000 - 300,000/one-way ticket. From the center of Ha Giang city, you have to travel a distance of 100km to reach Hoang Su Phi. It is important to note that, when moving along this 100km road, you can rent a motorbike to enjoy the majestic beauty of the Northwest mountains, but you must obtain good driving skills as there are many steep, zigzag and dangerous roads. Motorbike rental price is about VND 150,000 - 200,000/vehicle/day. 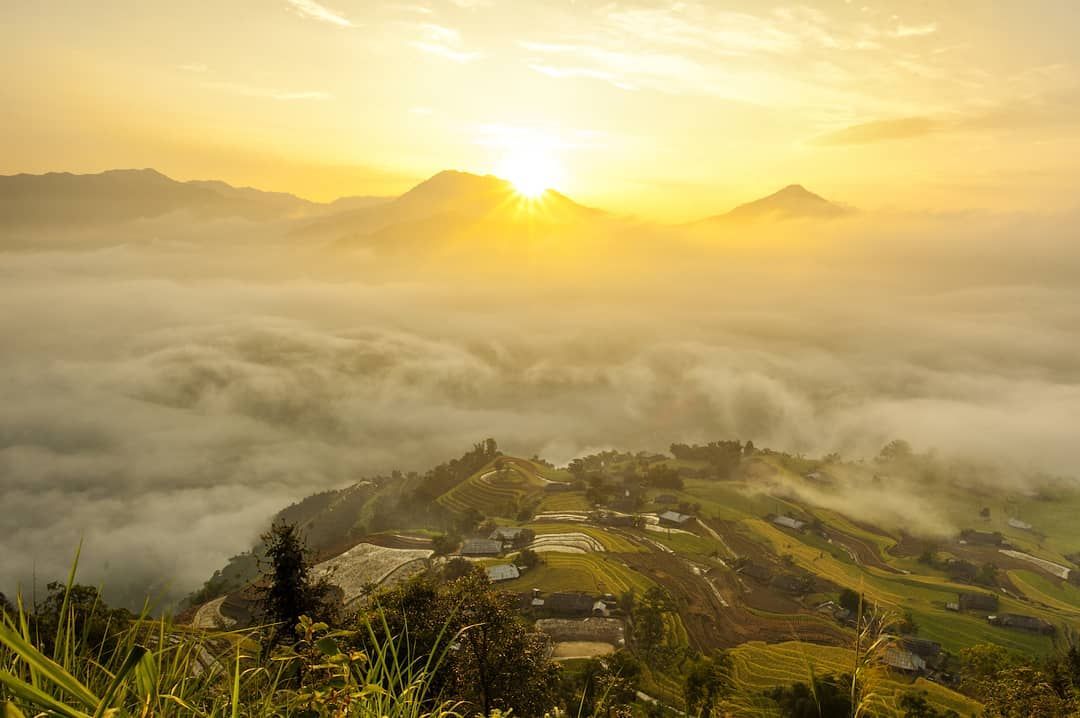 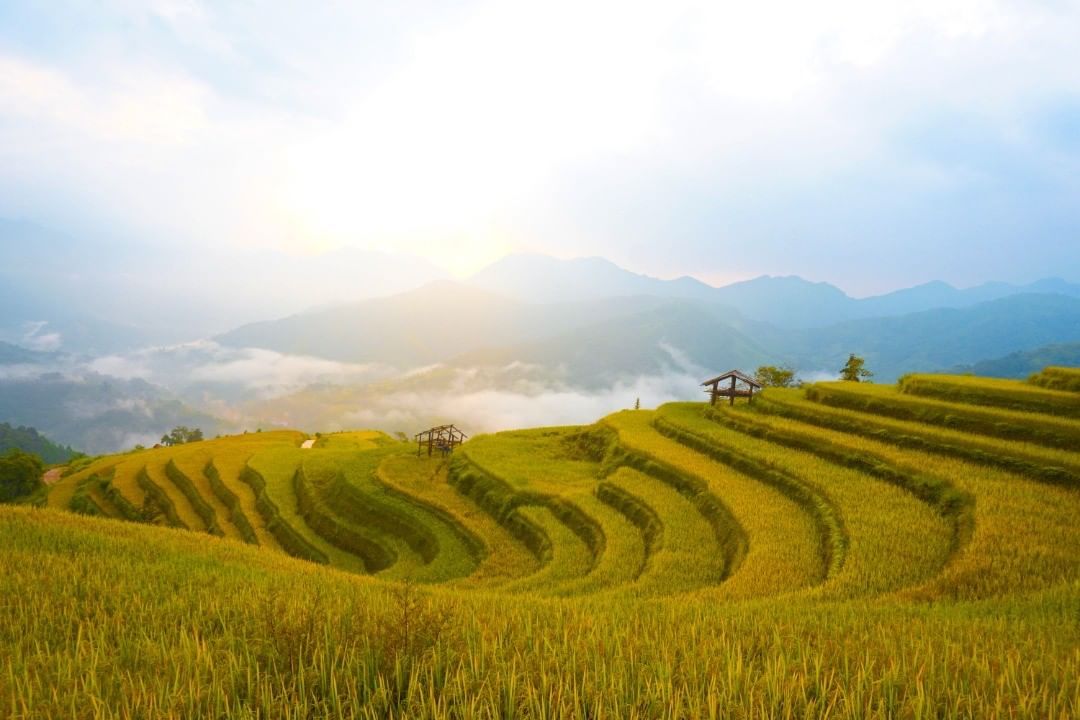 With majestic but romantic scenery from terraced fields, Hoang Su Phi is a must-visit destination in Ha Giang. You will definitely be surprised at  the golden "rice mats" in the vast space of the mountains and forests.