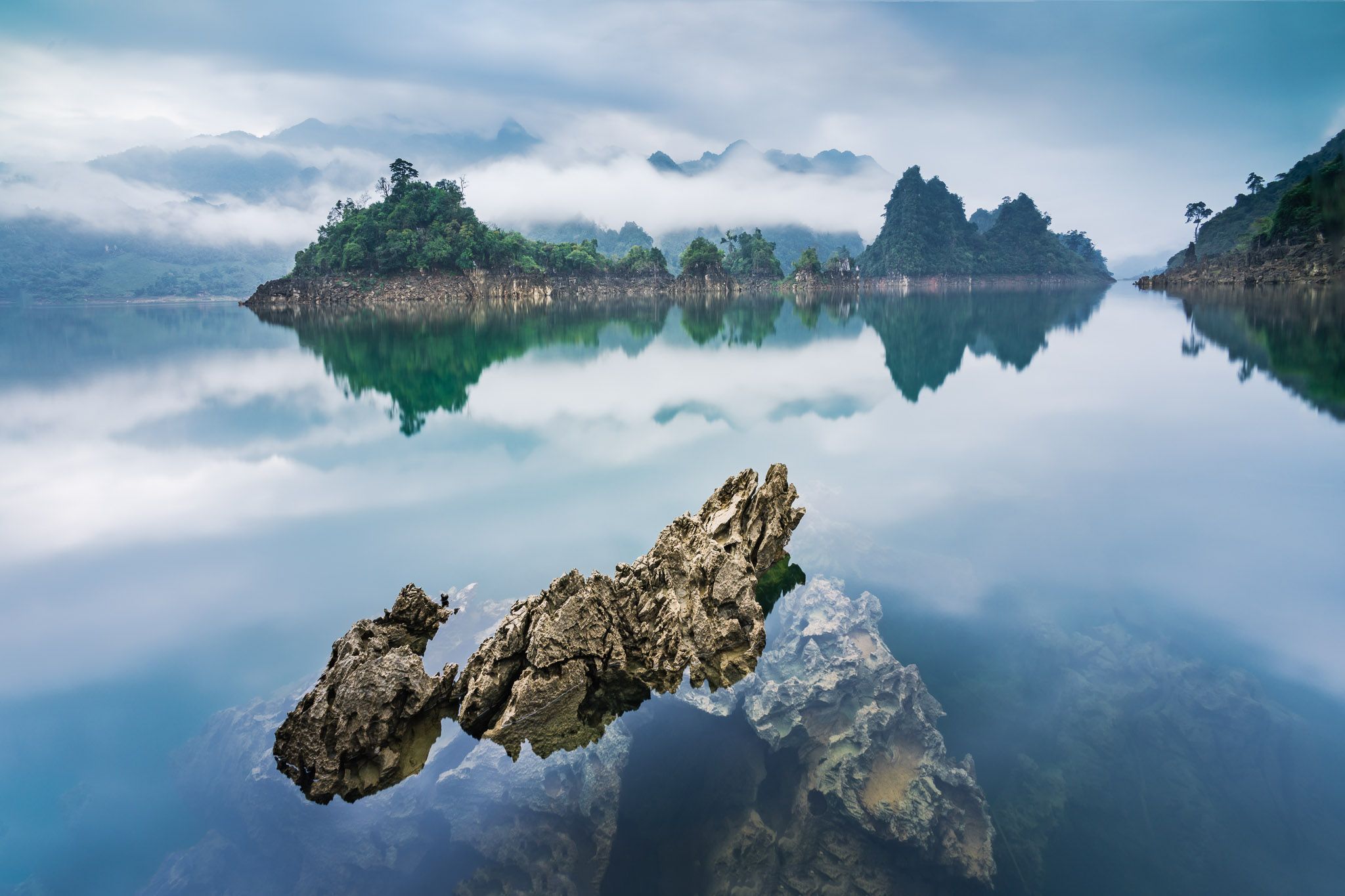 Tuyen Quang and four attractive destinations you should not ignore

Tuyen Quang is not a famous tourist destination in Vietnam, but it still has unique landscapes. Here are some places that you should visit when coming to this land. 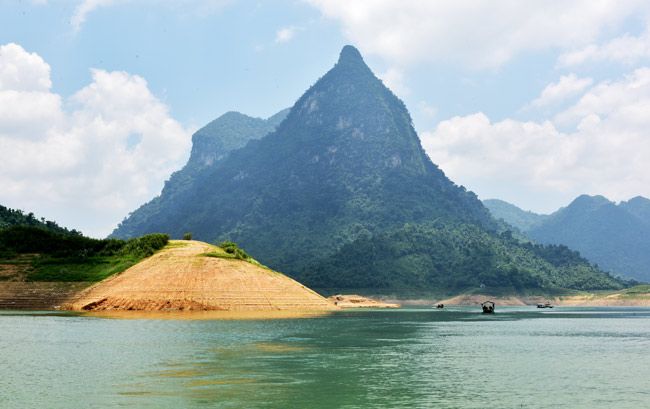 Na Hang Nature Reserve stretches over 4 communes of Khau Tinh, Con Lon, Son Phu and Thanh Tuong, which covers an area of 21,000 hectares, including primeval forests, many waterfalls, mountains and Na Hang lake. In the local language, Na Hang means “the last field” or “the field in a valley”. 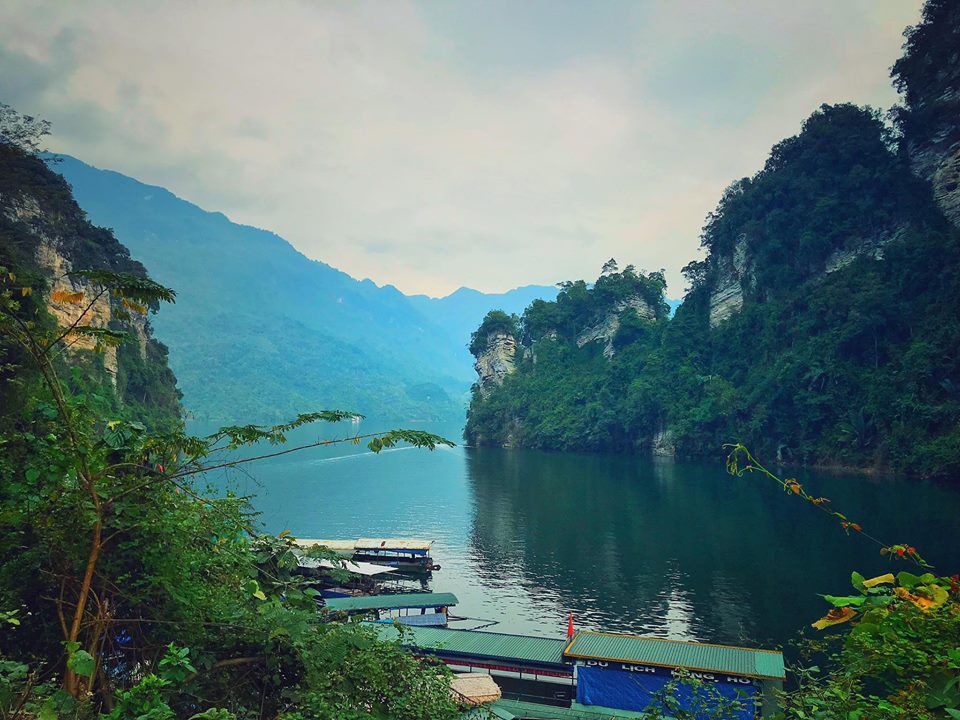 Na Hang is considered the most beautiful lake in Tuyen Quang. Photo: toquoc.vn

Na Hang Lake has an area of ​​up to 8,000 hectares, which is the convergence of two rivers in the hydroelectric reservoir area, namely Gam and Nang River, with very gentle flows of water. A special feature of this place is that there are hundreds of mountains surrounding the lake, creating a charming scene. In the early morning, the scenery is very dreamy with mist and clouds spreading across the mountainside. When the sun rises, the mountains appear more clearly and reflect on the surface of the clear lake. You can rent a boat to travel around the lake to enjoy the beauty of the pure nature here. 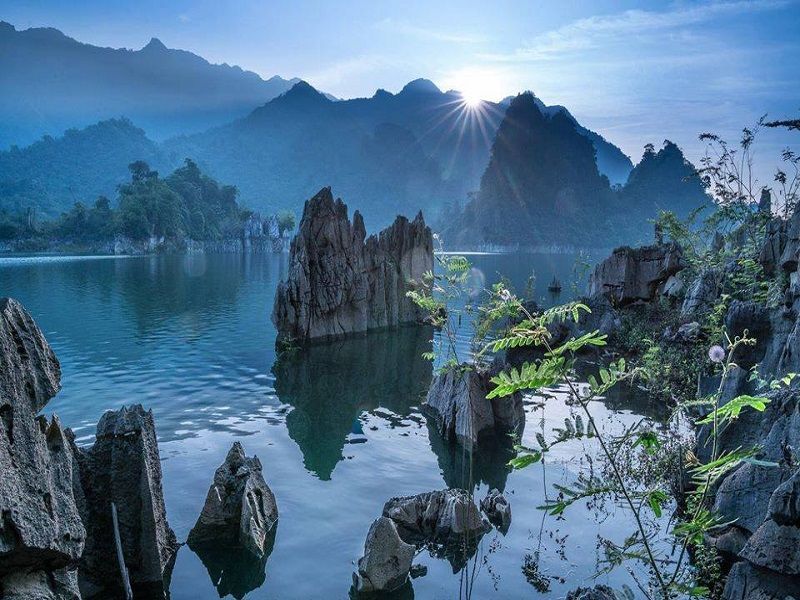 This reserve also has many beautiful waterfalls such as Mo, Cay Dai, Cay Sung, Khuay Sung, Khuay Me and Khuoi Nhi, which are likened to strips of soft white silk in the middle of mountains and forests. Notably, Phia Vai cave is a typical archeological site with thousands of labor tools dating back from 3,000 to more than 10,000 years old. 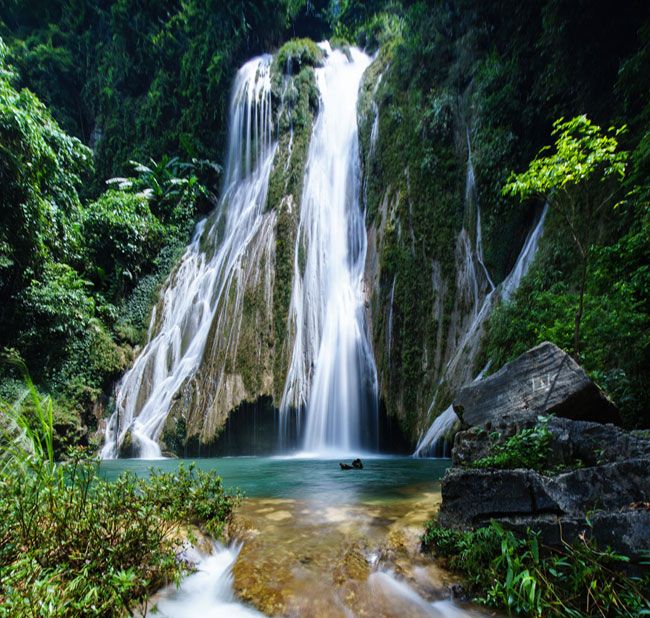 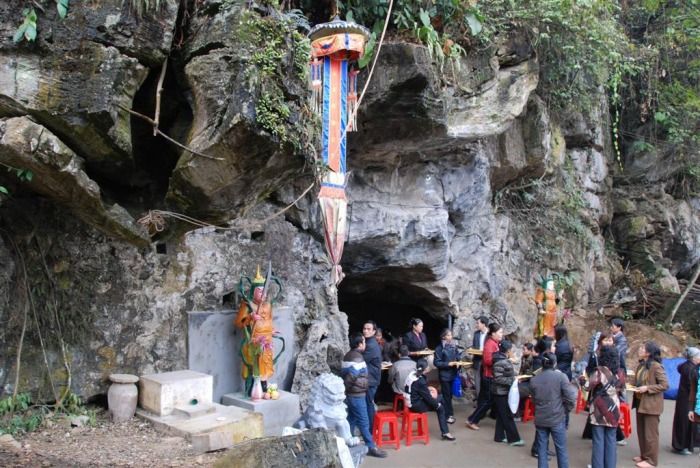 The entrance of the cave leading to the pagoda inside. Photo: hilifevietnam

Huong Nghiem is also known as “Hang Pagoda” as it is located inside a cave (in Vietnamese, “Hang” means “cave”) at the foot of Huong Nghiem mountain in Phuc Tho hamlet, An Khang commune, Yen Son district. According to the stele in front of the gate of the pagoda, Huong Nghiem was built a long time ago, in the reign of King Mac Thai Tong - the 8th year of Dai Chinh era (1537). The pagoda is located in a natural limestone cave with two stone domes and many impressive stalactites of all shapes. 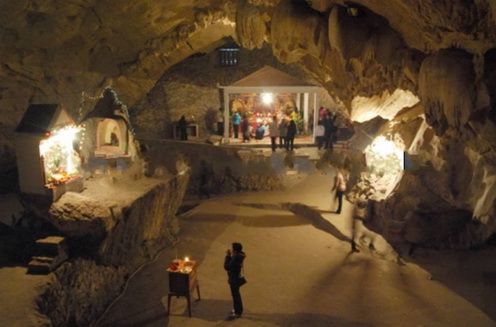 According to a translation from Chinese ancient language by Assoc. Prof. Dr. Dinh Khac Thuan, Huong Nghiem Pagoda was previously famous for being sacred and mysterious - the officials of the Tuyen Quang region who wanted to have nice weather, abundant crops, and a prosperous life for the people all came here to pray. In the past, in the cave, there was a well with a depth of 8-9m near an underground stream flowing into the Lo River, but over time, it was destroyed. In the cave, there are many paths to the mountain peak or down to the underground stream, which are very mysterious. Currently, due to the increasing demand of Buddhists and tourists coming here to worship, the pagoda is being expanded with many works, among which, the most prominent is the reclining Buddha statue, which is considered the largest one in Northern Vietnam. 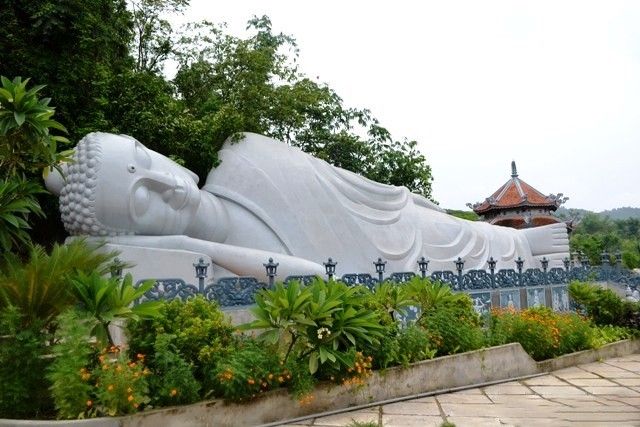 The reclining Buddha statue which is considered to be the largest one in Northern Vietnam at Huong Nghiem Pagoda. Photo: mytuyenquang

The rampart of the Mac dynasty

Mac rampart, also known as Tuyen Quang ancient rampart, is one of the few relics of this dynasty that still exist in Vietnam today. The rampart was built at the choke point of waterways and roads on the banks of the Lo River in Tuyen Quang. 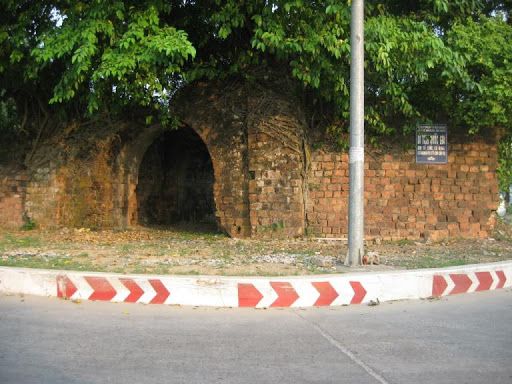 In 1527, Mac Dang Dung forced King Le Cung Hoang to cede the throne to establish the Mac dynasty, which took control of the Northern region of Vietnam and was also known as the “Northern Dynasty”. In 1533, Nguyen Kim assisted Le Trang Tong to be on the throne and established the Le Trung Hung dynasty to control the “Southern Dynasty” from Thanh Hoa province. Both these two dynasties tried to defeat each other in many ways.

The Mac Dynasty built the “Duong Citadel” in Hai Duong province and reformed the army with 120,000 soldiers. In 1592, this dynasty built a distant defensive line with ramparts in provinces such as Tuyen Quang, Lang Son and Bac Giang. Notably, as Tuyen Quang bordered Cao Bang, which was an area that the Le Trung Hung’s regime could easily attack, the Mac dynasty had to build a rampart here. It was said that the Mac rampart was built in just one night. 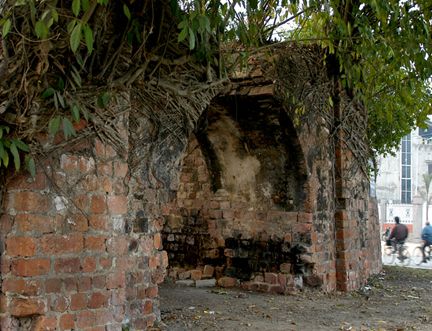 In terms of architecture, the rampart covers an area of 75,625m2 in a square shape, with a height of 3.5m and a width of 0.8m thick, while each wall is 275m long. On each side of the rampart, there are semicircular doors, on which are towers and roofs tiled, while around the walls are deep moats full of water. On the area surrounded by this rampart, the Mac dynasty also built an earth mountain with a height of over 50m, which was called “Tho Son”. The wall bricks are also very special as they are much bigger than today's bricks. At the same time, due to being made from soil with a lot of iron ore, they are very solid - and this is also a typical brick of the Le Dynasty. At the beginning of the Nguyen dynasty, the rampart was restored and reinforced with smaller bricks. Currently, this work only has a wall with a length of about 100m, while the western and southern gates are dilapidated. As the rampart was degraded, Tuyen Quang province restored it with a new look. 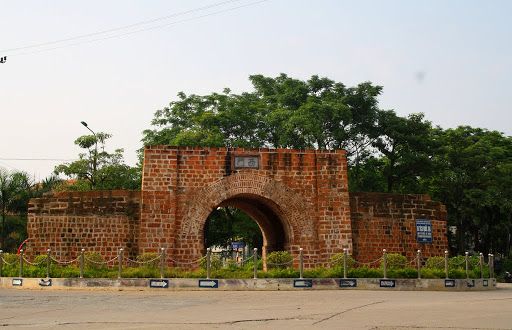 The new look of the Mac rampart after being restored. Photo: lehoithanhtuyen

Bao Ninh Sung Phuc Pagoda is located in Lang Tac village, Yen Nguyen commune, Chiem Hoa district, which has a long-standing history due to being built in 1107 under King Ly Nhan Tong’s reign. Although there is no record of the original shape of the pagoda, based on its remains on the ground, it is possible to guess its original massive size. The pagoda is located on Khuon Thoai hill, facing down to the fields of syzygium nervosum, from which you can observe the majestic mountains. 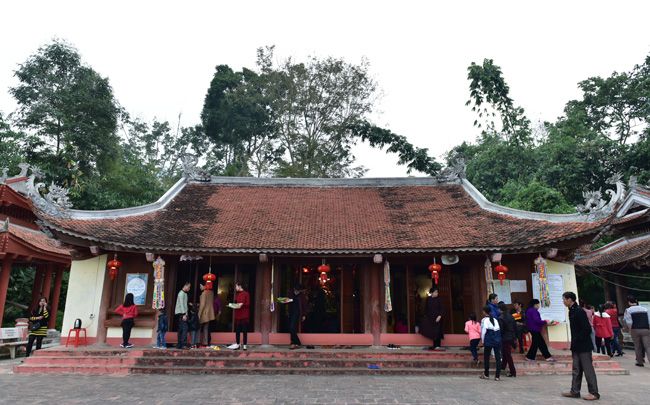 The researchers believe that, in the Le Dynasty, the pagoda consisted of two main buildings with a foundation made of cobblestone and slate, while bricks and tiles were typical of the Ly Dynasty, creating the shape of the letter “T”. People found many artifacts of the Le Dynasty in the pagoda such as: serrated roof fringes, plantago leaf-shaped roof fringes, patterns of orchid leaves at the corner of the roofs, and ceramics decorated with patterns of fish-scale and wave. By the Nguyen Dynasty, the pagoda completely collapsed, and then was reconstructed as it is today. Due to the location in the middle of lush trees, it creates a sense of tranquility and majesty. 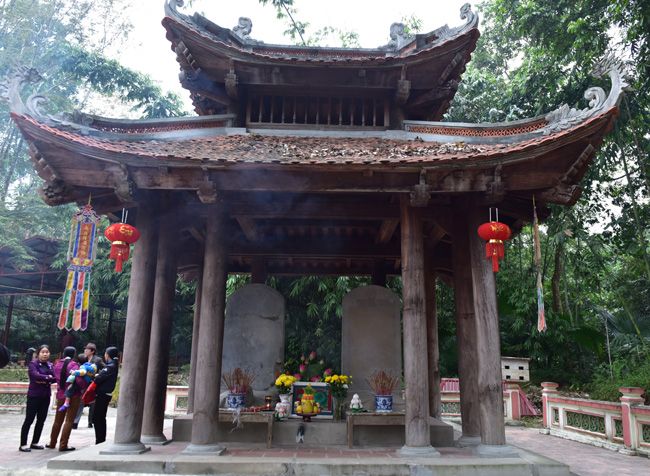 The ancient stele in the pagoda. Photo: baophapluat

In Bao Ninh Sung Phuc pagoda, there is an ancient stone stele, which was discovered by the locals at the foot of Dan Han mountain in Yen Nguyen commune, southwest of Chiem Hoa district, and then was brought to the pagoda. The author of the writing on the stele is Ly Thua An, who lived in the late 11th and early 12th century and was a high-ranking mandarin of the Ly dynasty. Ly Thua An composed this epitaph upon the request of Ha Hung Tong, who was also a high-ranking mandarin of the dynasty. Bao Ninh Sung Phuc Stele, which has a height of 1.45m, a width and a thickness of 0.8m, was made from monolithic natural stone. The stele is put on the back of a stone turtle, and on the top of the stele, there is a large inscription: "Bao Ninh Sung Phuc Stele". It is noted that this is the oldest stele in Tuyen Quang province up to now. 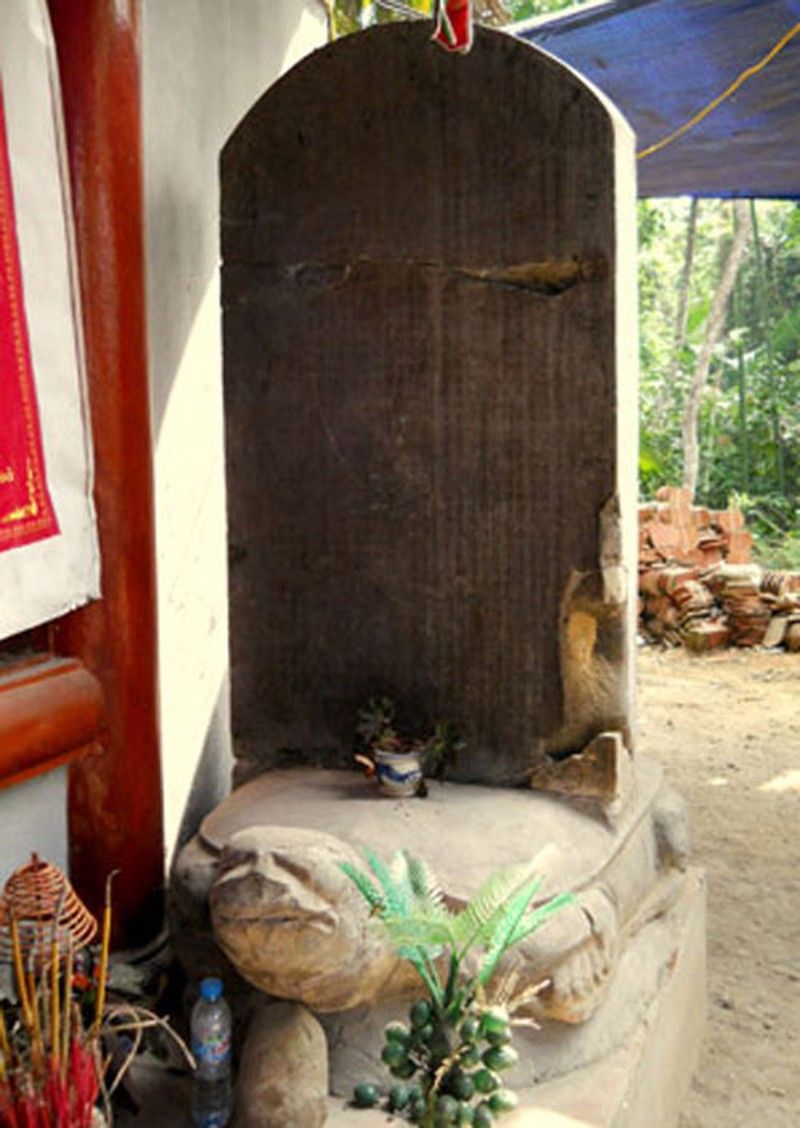 When coming to Tuyen Quang, not only can you enjoy the majestic and unspoiled beauty of Na Hang nature reserve, but you can also understand more about the spiritual culture here with ancient pagodas while admiring the Mac rampart with a long-standing history. Each destination will definitely leave an unforgettable impression on you.