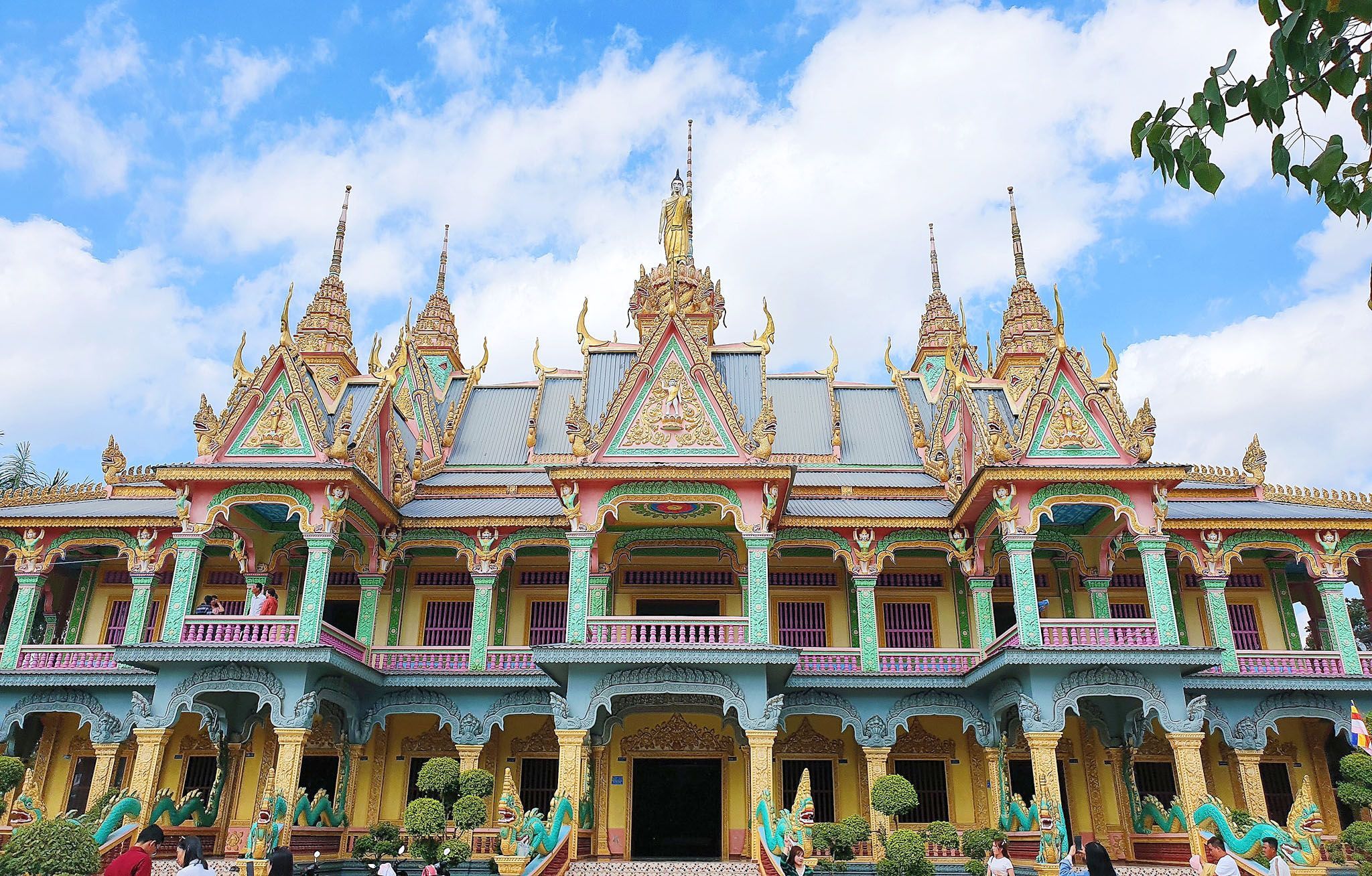 Som Rong Pagoda in Soc Trang not only attracts visitors thanks to its unique architecture with Khmer characteristics, but it is also famous for having the largest reclining Buddha statue in Vietnam. This will be the destination that gives you peace of mind amidst the bustling life.

Som Rong, also known as “Wat Pătum Wôngsa Som Rông”, is an ancient pagoda featuring the unique architectural designs of the Khmer people. The name “Som Rong” derived from the name of a wild plant growing vigorously around the pagoda hundreds of years ago. The pagoda was constructed in about 1785, and has experienced 12 generations of abbots. Initially, it was built of bamboo and wood with a thatched roof, but in 1725, the pagoda was rebuilt on a new location as it is today, which is a larger area donated by the Buddhists. In 2000, the main hall of Som Rong pagoda in Soc Trang was officially completed. 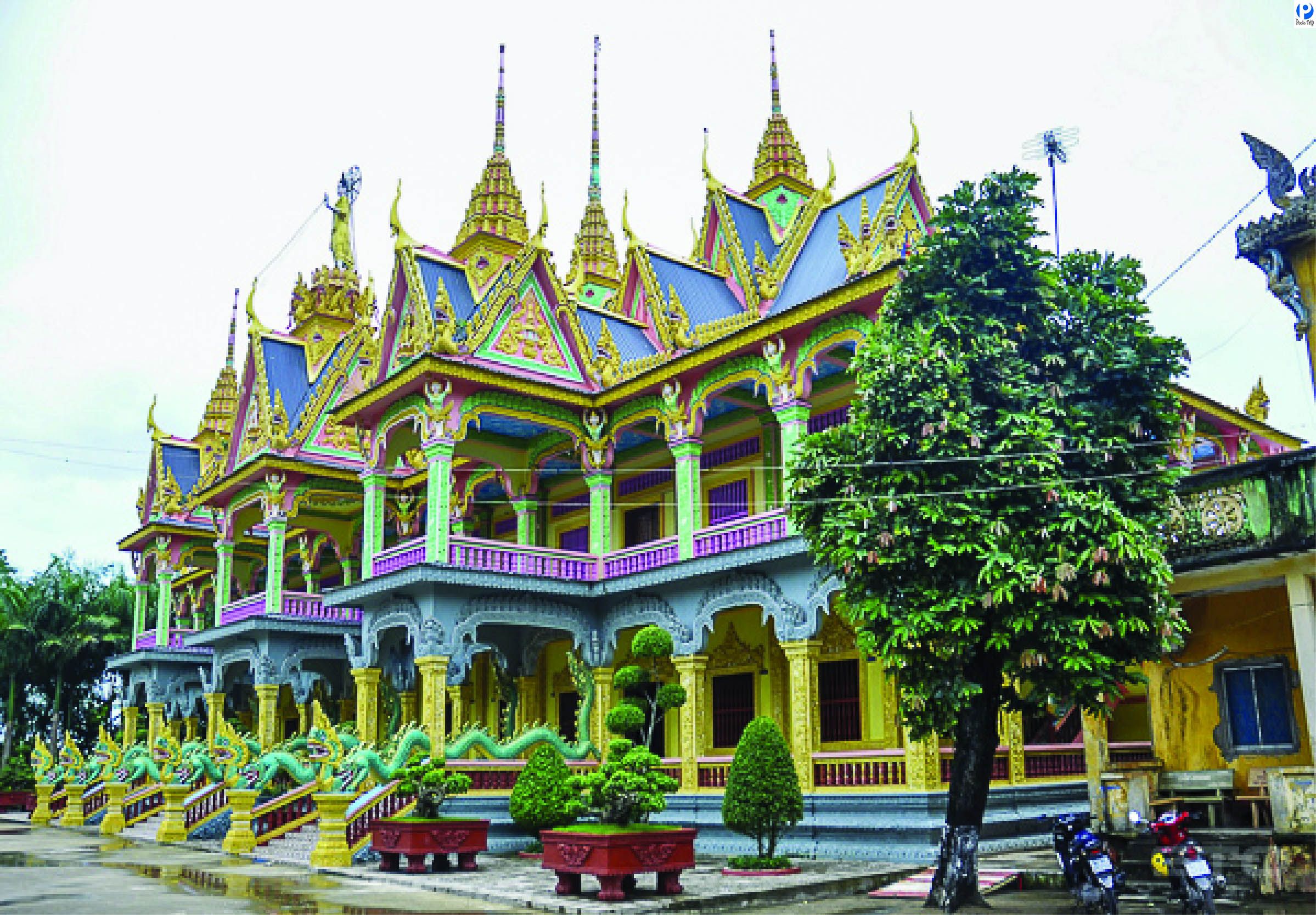 Som Rong has the same architecture as other Khmer pagodas in Southern Vietnam with works such as the reclining Buddha statue, the main hall (right), Sala, the monks’ house and the stupa. The highlight of the pagoda is the welcome gate area with five splendid towers placed right on the roofs, which creates a sense of magnificence and majesty. It is important to note that this design is the symbol of Mount Meru (i.e. Mount Tu-di), where the five Future Buddhas would achieve complete enlightenment (according to Buddhist perspectives) and also where the five Gods often reside (according to Brahman doctrine). In addition, the pagoda gate also has decorative patterns symbolising Khmer culture such as the Bird God  Krud and Naga Snake God. 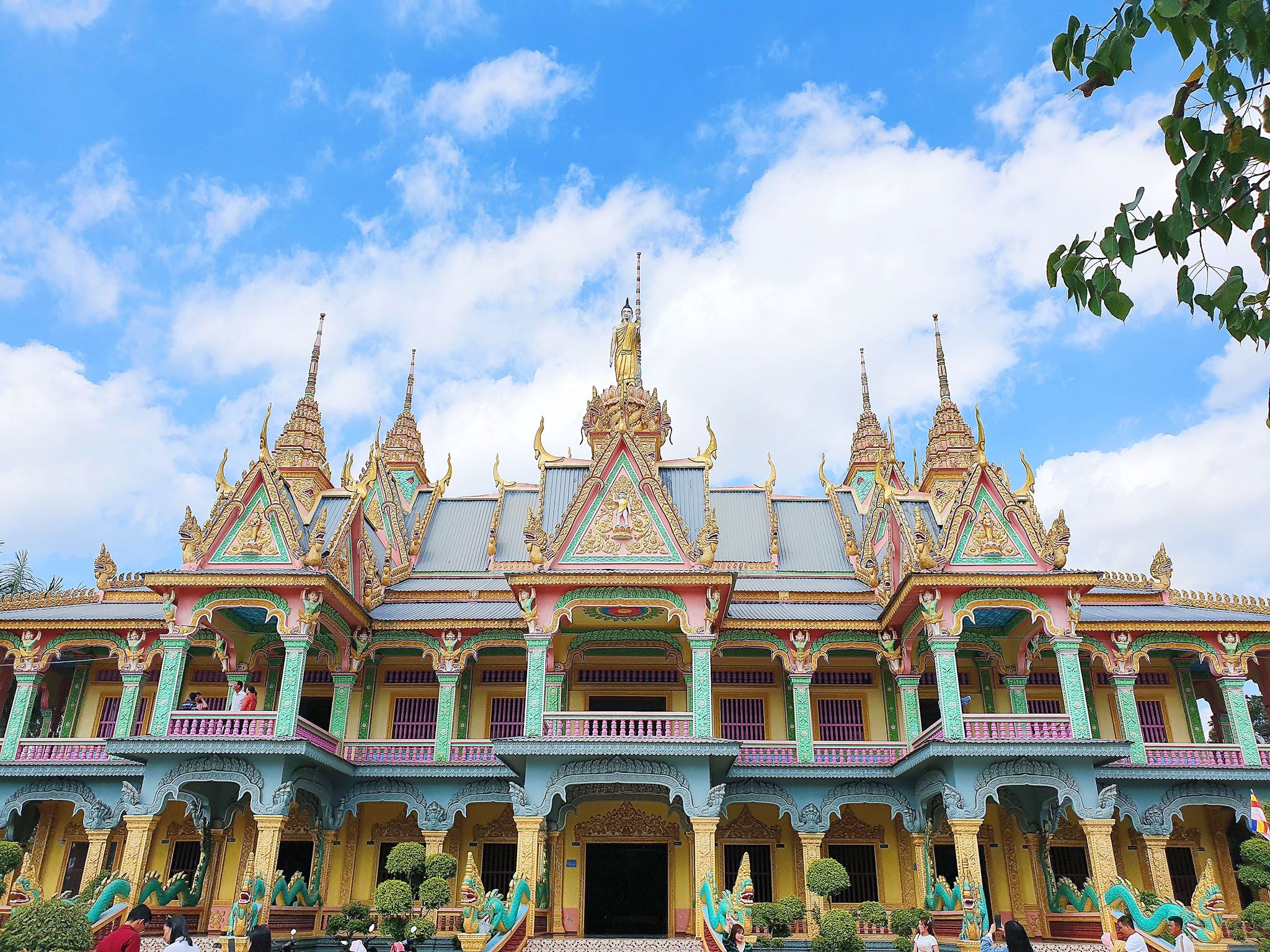 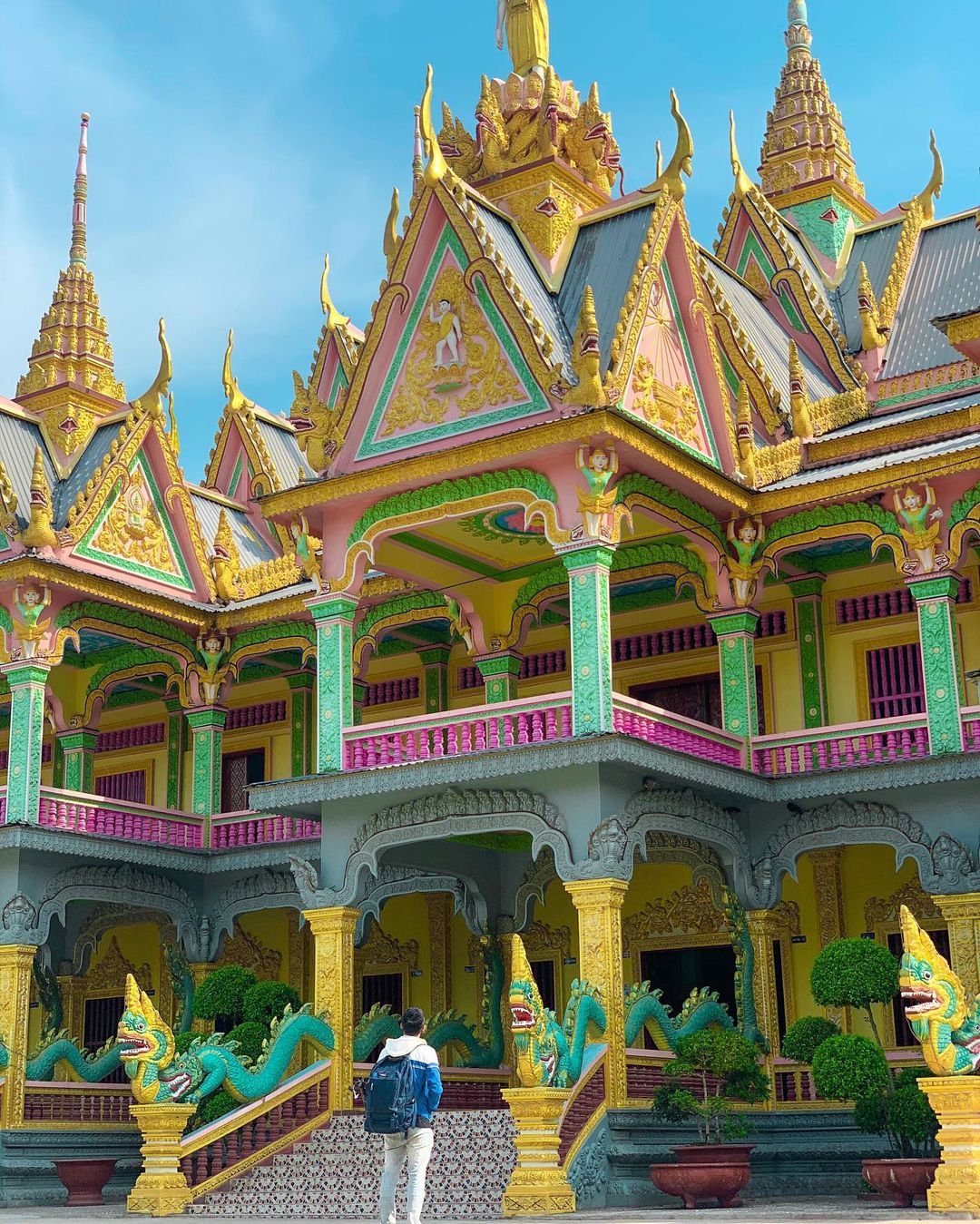 On either side of the entrance to the main hall is a unicorn statue with the meaning of preventing evil and protecting the Buddha. Photo: holden.nguyen

The main hall is the main work of the pagoda with a relatively special structure consisting of three overlapping roof systems at a certain distance, below which is supported by six rows of pillars. Below the roof fringe adjacent to the pillars, there are statues of goddess Kâyno with beautiful and graceful fairies, who are very skillful in dancing and singing. On either side of the entrance to the main hall is a unicorn statue which represents protection and evil prevention for the Buddha. On the walls and ceiling of the main hall are frescoes depicting the life of Shakyamuni Buddha, while inside this area are many Buddha statues, among which, the most special ones are two ancient statues made of wood at the time when the pagoda was built in 1785. These two Buddha statues are in a standing position with their arms extended straight forward while their palm lines are red and pointing forwards, which is to remind people not to do evil deeds, but earn merits by doing good things. 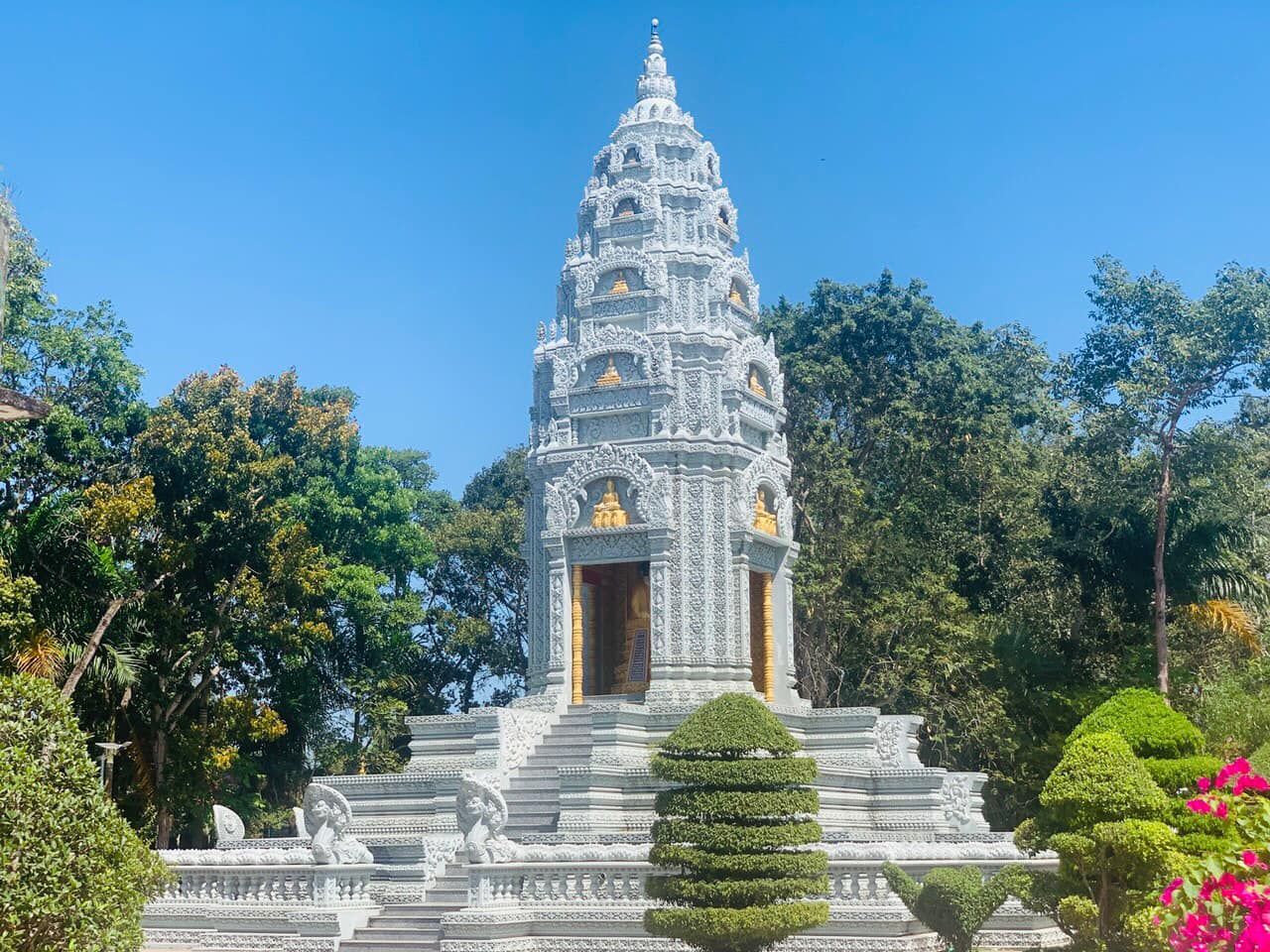 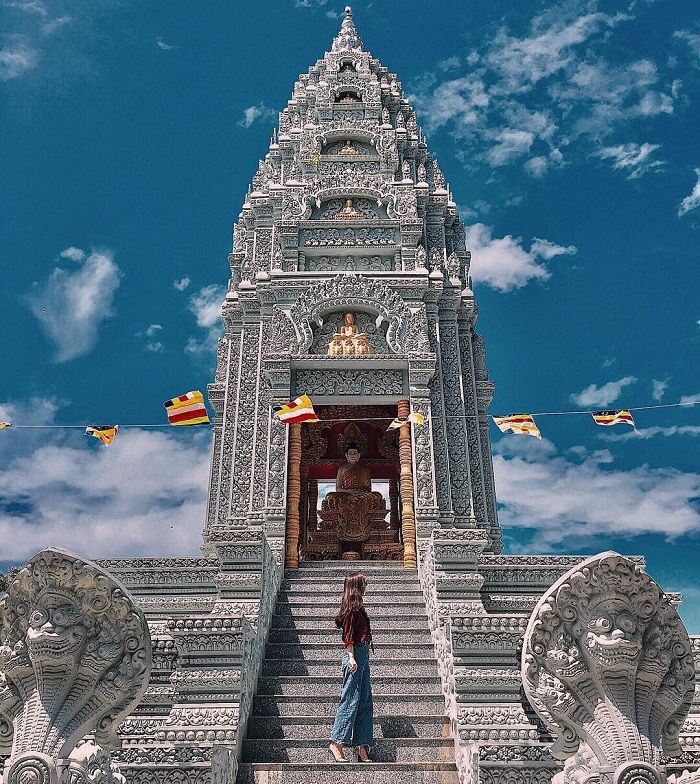 The stupa has a gray colour like a monolith. Photo: dulichvietnam

Som Rong pagoda also has an outstanding work - the stupa - which attracts many tourists. It was constructed by Venerable Ly Minh Duc in 2010 and completed in 2012, with a width of 11m, a height of 25m and an area of about 100m2. The tower has four sides and four aisles, representing the Four Immeasurables of Buddhism (Loving-kindness - Compassion - Empathetic joy  - Equanimity). The stairs leading to the tower are carved with sophisticated Naga snake images. A special feature of this stupa is that, instead of being prominently painted in gold as the traditional Khmer style, it has a gray colour like a monolith. 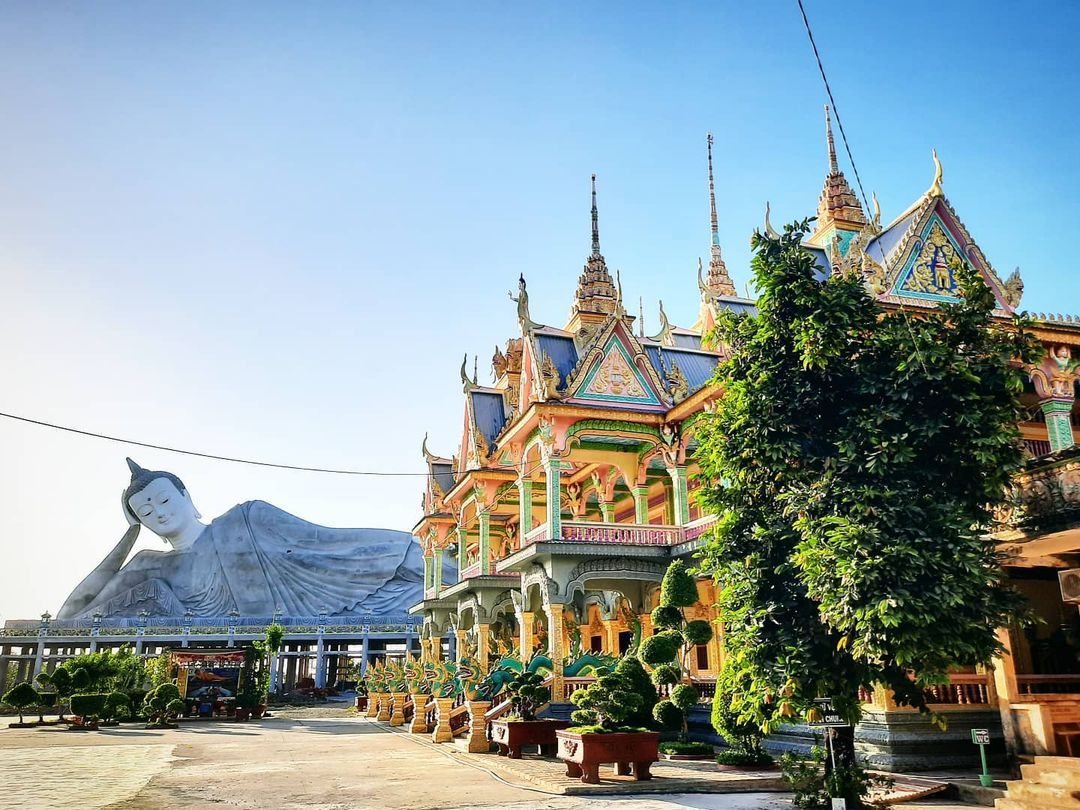 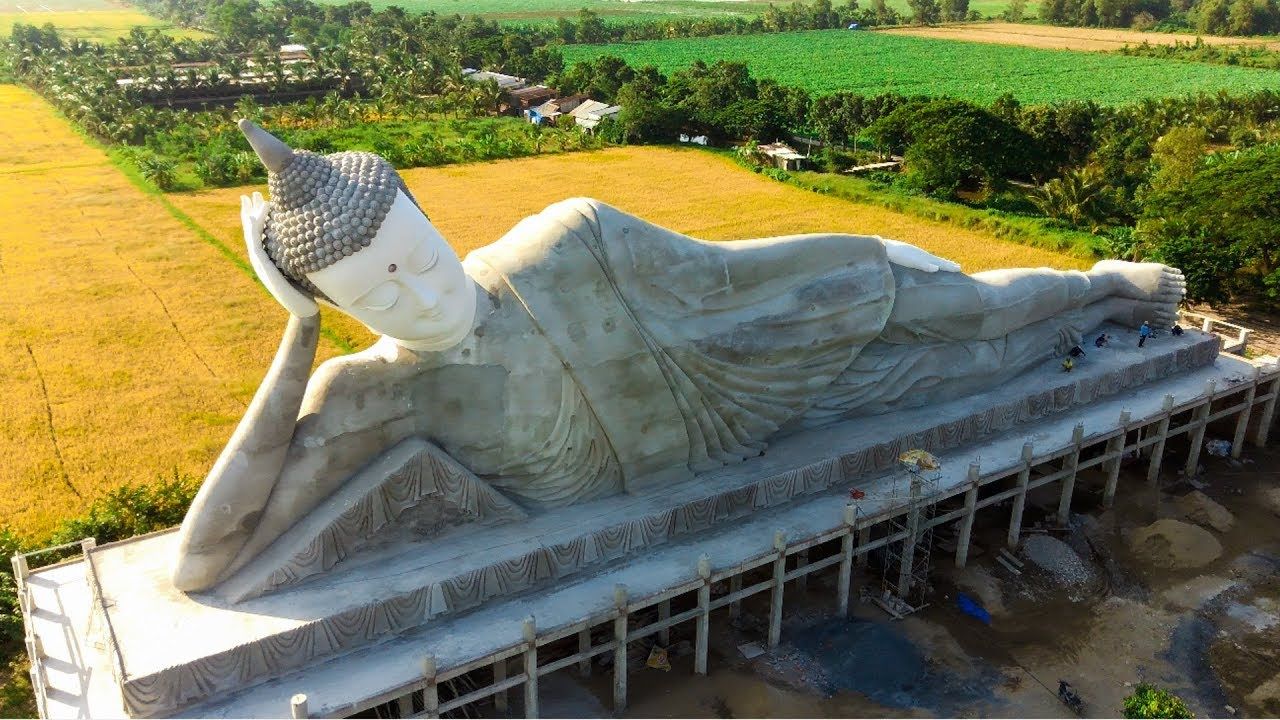 Currently, the pagoda has the largest outdoor statue of Shakyamuni Buddha entering nirvana in Vietnam. The statue has been built since 2017 and is almost complete now, with a length of 63m, a height of 22.5m and a weight of 490 tons. With a highly artistic design, this reclining Buddha is considered a symbol not only of Som Rong pagoda but also of Soc Trang province. Due to its large size, visitors can see the statue from hundreds of meters away, especially at sunset, it becomes even more outstanding. 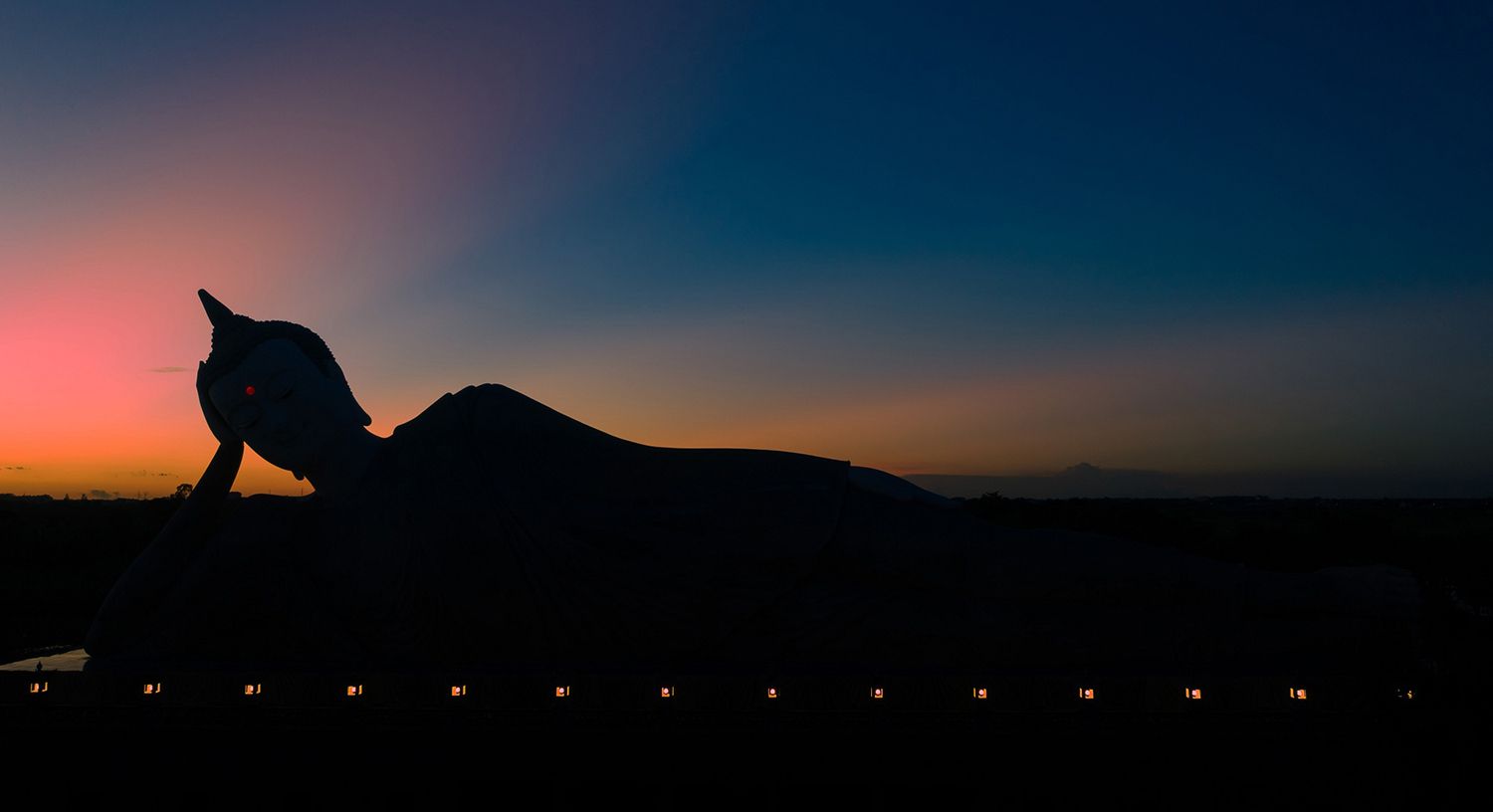 The campus of Som Rong pagoda is quite airy with many trees, especially old trees of several tens to hundreds of years old. Therefore, when coming here to visit and worship, you will be able to enjoy the pure and peaceful space. Like many other Khmer pagodas, Som Rong is a place associated with the cultural and spiritual life of the indigenous people. 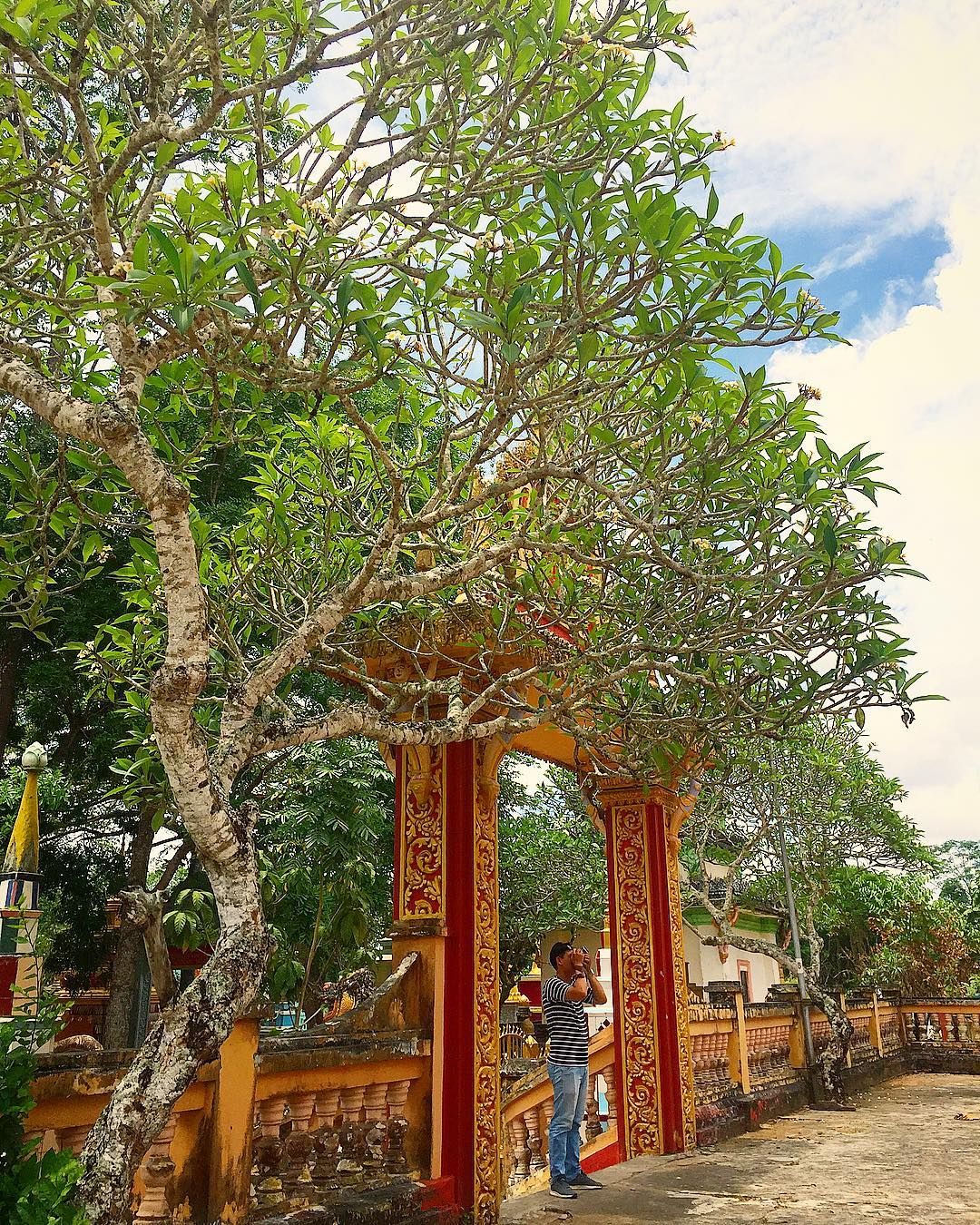 How to get to Som Rong Pagoda

It is quite easy to get to Som Rong pagoda: from the center of Soc Trang city, follow Ton Duc Thang street through the People's Committee of Ward 5, then turn left and the pagoda will appear in front of you. 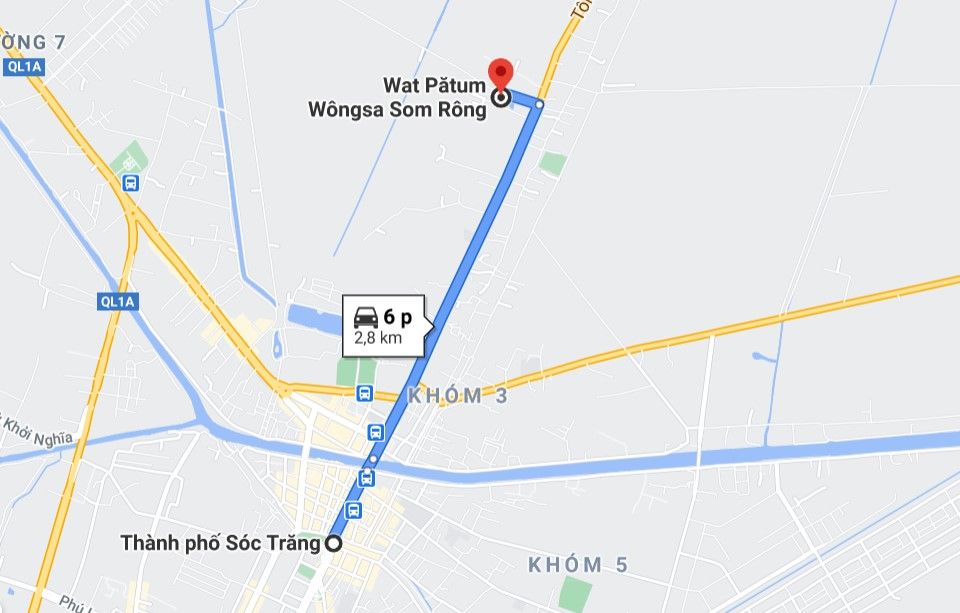 Som Rong is one of the pagodas with impressive architecture of Soc Trang with the largest outdoor reclining Buddha statue in Vietnam. When coming here, you can not only learn about the cultural and religious beliefs of the Khmer people, but also relax in a peaceful and pure space.