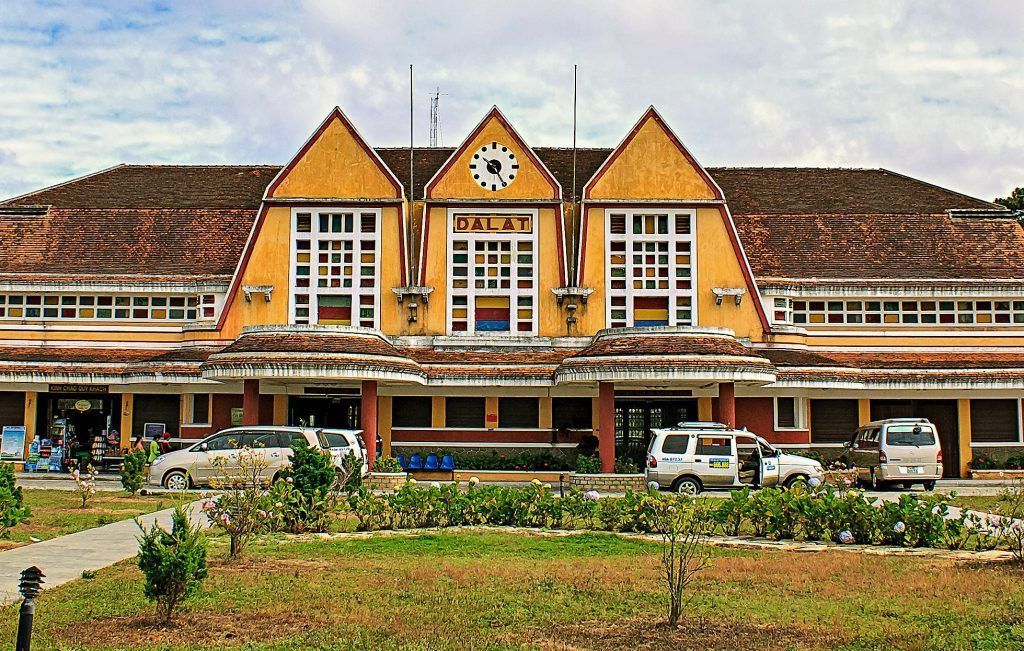 Da Lat has always been a destination that attracts a large number of domestic and foreign tourists, and Da Lat Railway Station is a historical place that you should not ignore when coming here. 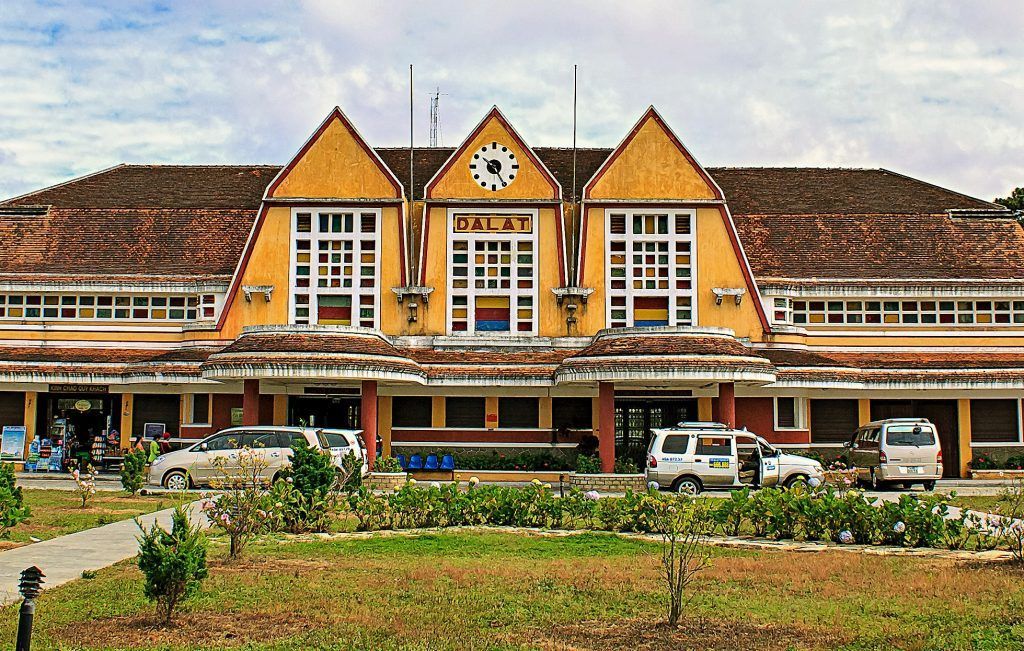 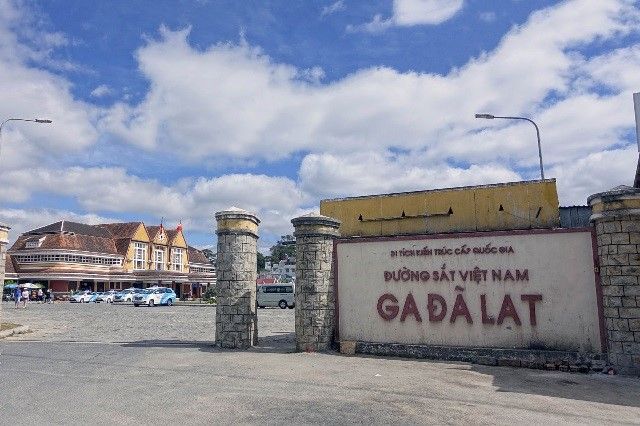 As a station in Da Lat city, Da Lat Railway Station is located at Quang Trung Street, Ward 9, Da Lat City, Lam Dong province, at an altitude of more than 1,500m above sea level and is also one of the oldest stations in Indochina. 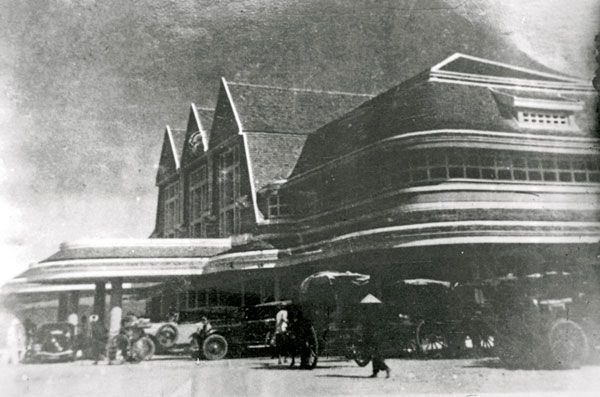 A picture of Da Lat station in 1939. Photo: baolamdong

Da Lat Railway Station dates back to the French colonial period and was designed by two famous French architects, namely Moncet and Reveron, for the purpose of transporting goods between Phan Rang and Da Lat stations. This station was constructed in 1932, completed after six years and then put into use in 1938. At that time, it was considered as the most beautiful station in Indochina. 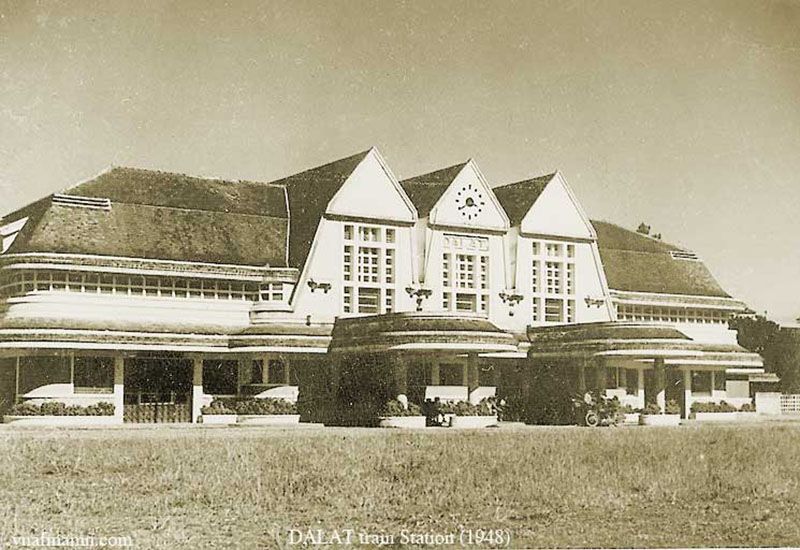 By the time of the US - Vietnam war, this railway was mainly used to transport weapons for the war with three routes, namely Thap Cham - Da Lat - Nha Trang, Thap Cham - Da Lat, and Saigon - Thap Cham - Da Lat. In 1972, the railway line was damaged due to war, so it had to be temporarily closed for repair until 1975 when it continued to be put into operation. Today, it only has a 17km of railway line from Da Lat to Trai Mat station to serve tourism. 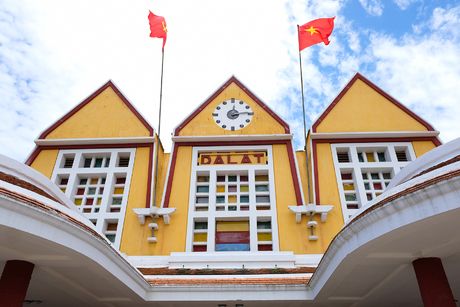 Inspired by the three majestic peaks of Langbiang mountain, the station also has three peaks and a large clock in the middle. Photo: vnexpress 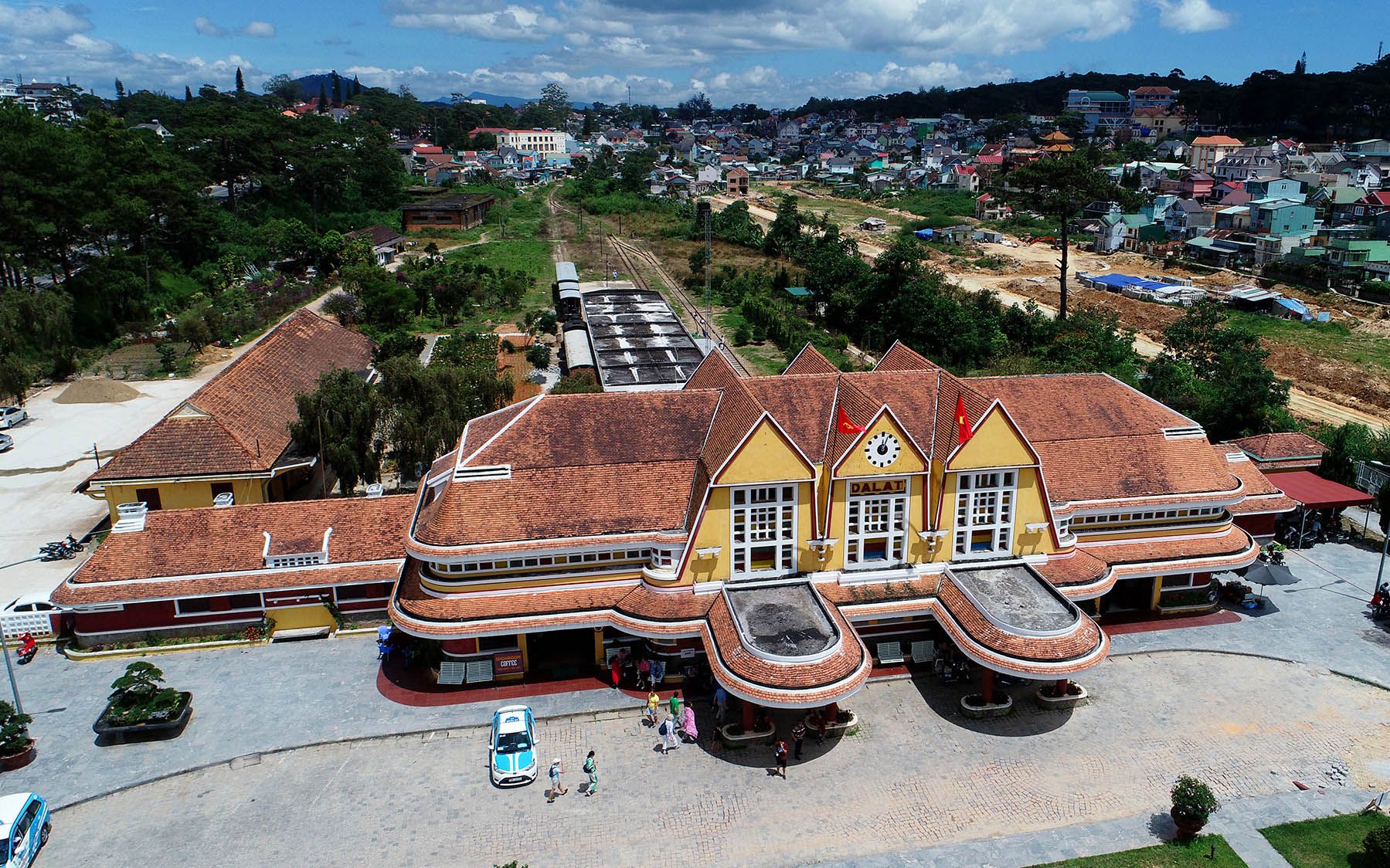 The roof simulates the roofs of communal houses of the Central Highlands, which features the local culture. Photo: Vnexpress

The station has a length of 66.5m, a height of 11m and a width of 11.4m. As the design of the station was based on the ideas of two French architects, it features the European style. Inspired by the three majestic peaks of Langbiang mountain, the station has three peaks as well with a large clock in the middle. Meanwhile, the roof simulates the roofs of communal houses of the Central Highlands, which features the local culture. Under the roof, there are colourful glass windows that create light effects for the interior area. The station is organized according to the principle of symmetry through the square axes, and its sheer size is evident through the concrete roof truss system with a height of up to 6m. 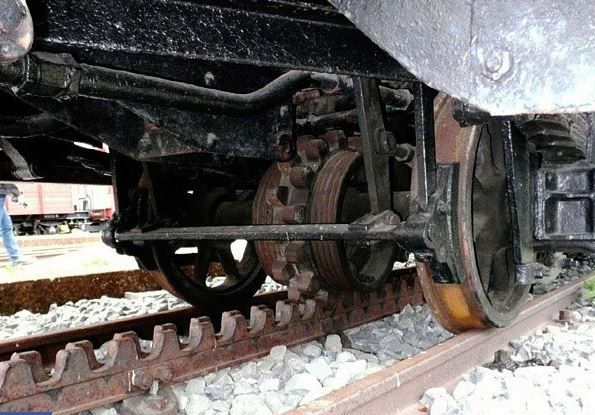 Da Lat station is the only place with a rack railway in Vietnam. Photo: kanesladen

Da Lat station is the only place with a rack railway in Vietnam - which is also a unique track in the world. In the past, trains had to run through five tunnels with relatively high slopes, so it needed a 16km long rack railway in the entire 84km length of the railway station of Da Lat to ensure safety. The station has a very old Japanese-made steam locomotive from the early 20th century. Notably, the station's lounge and ticket office are still in normal use today, even though they were built a long time ago. 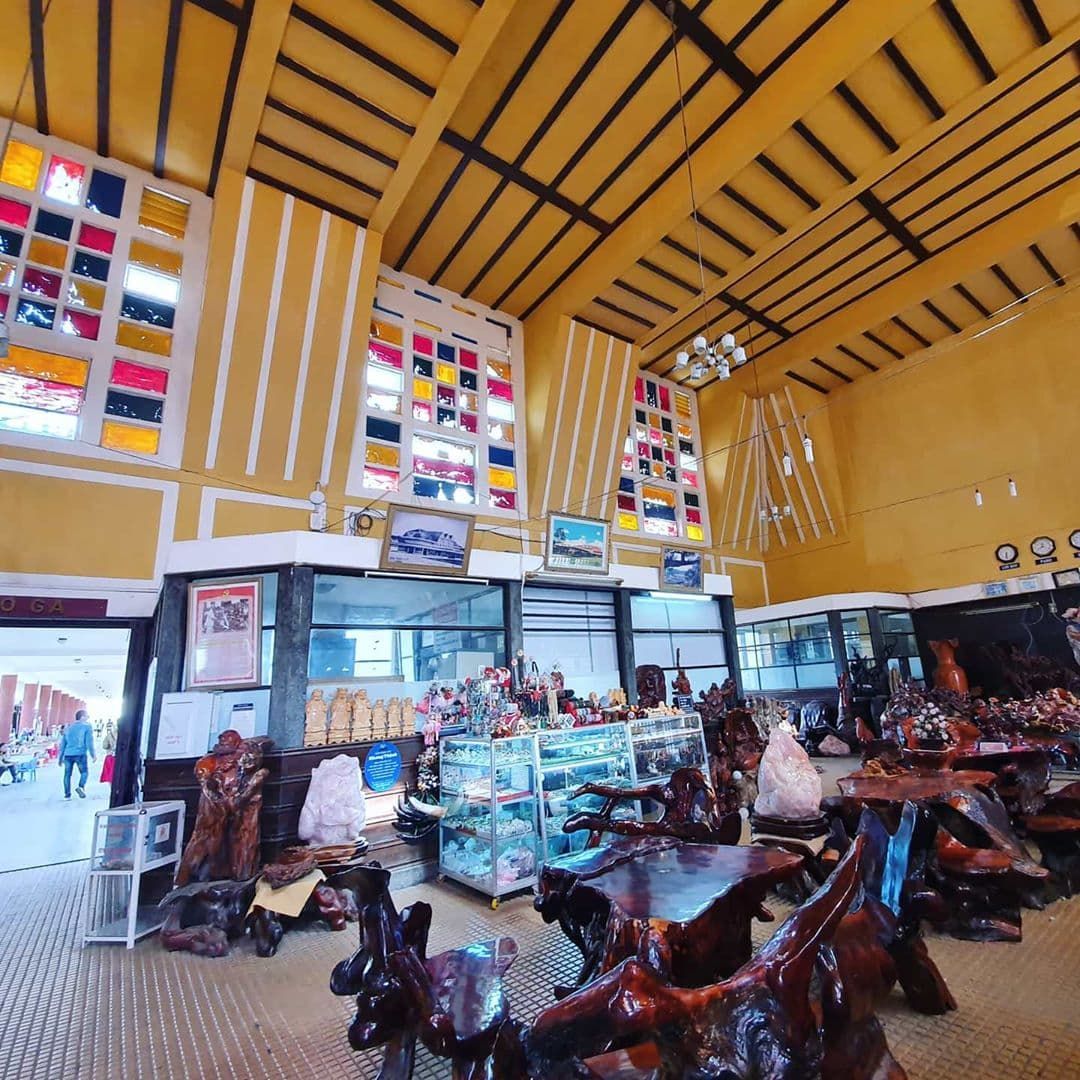 Inside Da Lat Station, many souvenirs are displayed.

The routes at Da Lat Station

The train at Da Lat station in the past. Photo: mytour

When coming to Da Lat station, you can buy tickets for short sightseeing routes. With a distance of 7km, you will experience a tour from Da Lat station to Trai Mat. During the tour, the train moves slowly so that you can leisurely enjoy the scenery. The last stop is Linh Phuoc Pagoda, which is a typical Buddhist architecture favoured by many people. 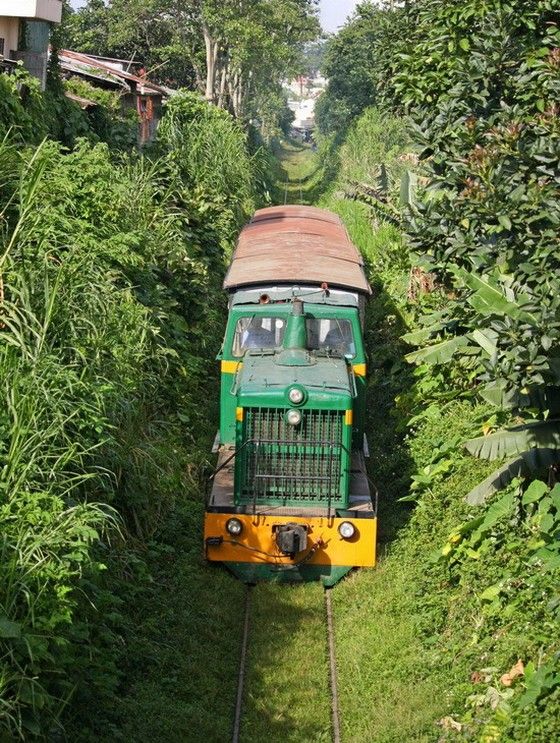 With the route from Da Lat station - Trai Mat, you can refer to the following scheduled time frames:

You can be flexible in your choice of departure and return times according to your preference instead of those on a fixed trip. It is noted that the route of Da Lat - Trai Mat is the only route operating at the station. In addition, you can visit Trai Mat and other related places by road. 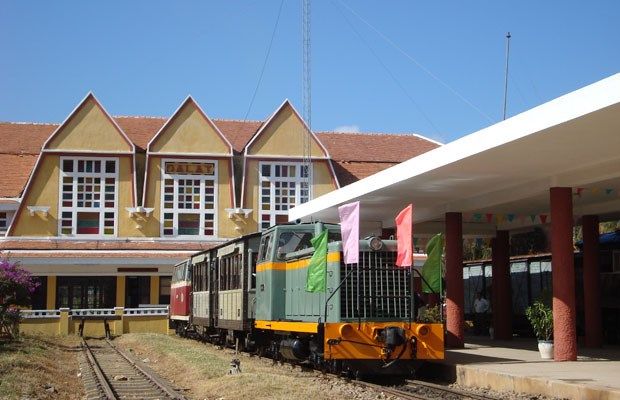 Regarding the cost, you can refer to the following prices:

You can buy tickets directly at the Da Lat train station or ask the staff at your accommodation to buy them for you. If traveling in a large group (more than 10 people), you should contact the station in advance to buy tickets as well as find out more related information. 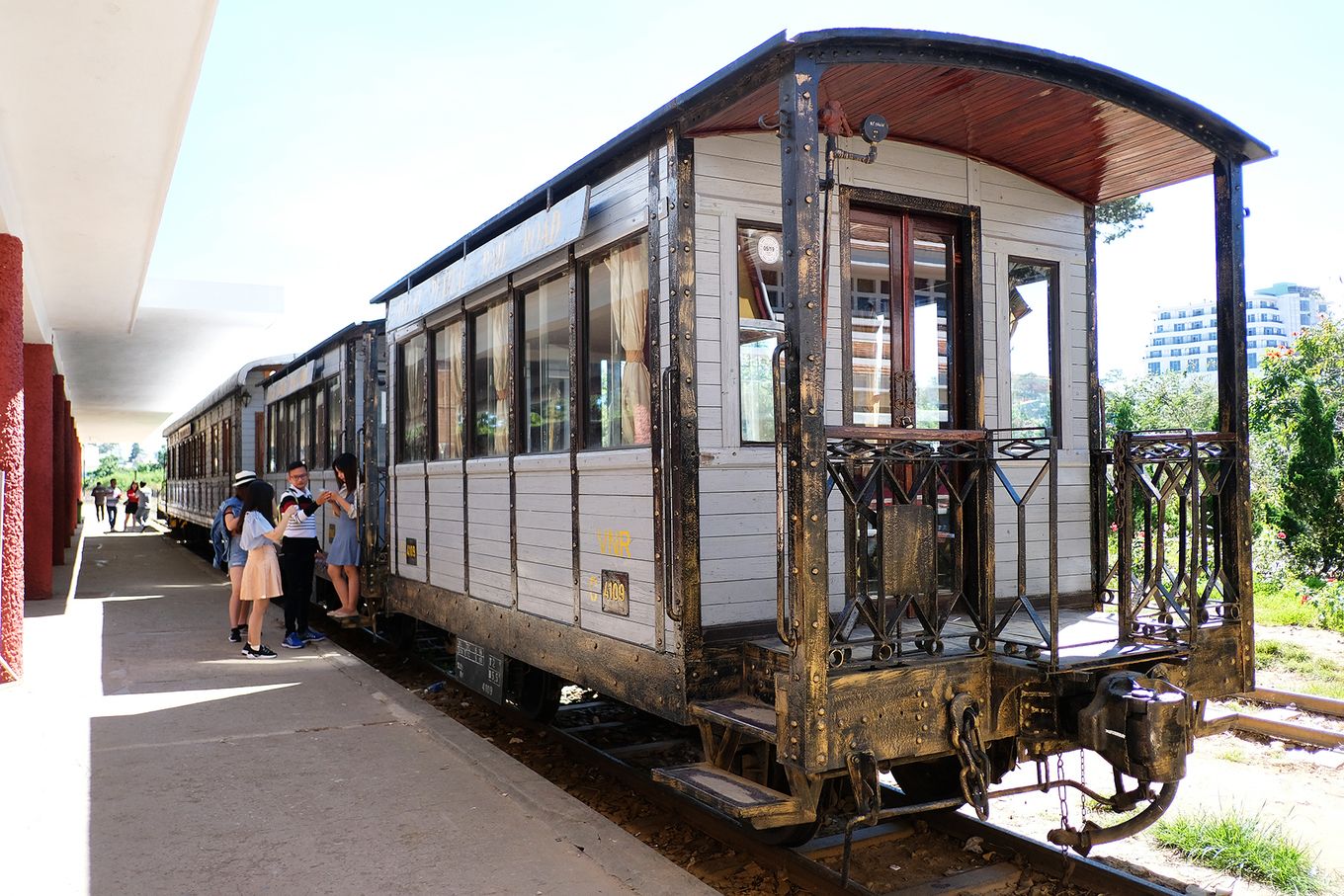 Da Lat Railway Station not only attracts tourists with its unique sightseeing route, but it also has famous backgrounds for tourists to take pictures. The old locomotives and carriages designed in the classic style with harmonious colours will be the ideal place for you to have attractive vintage photos

How to get to Dalat Railway Station: 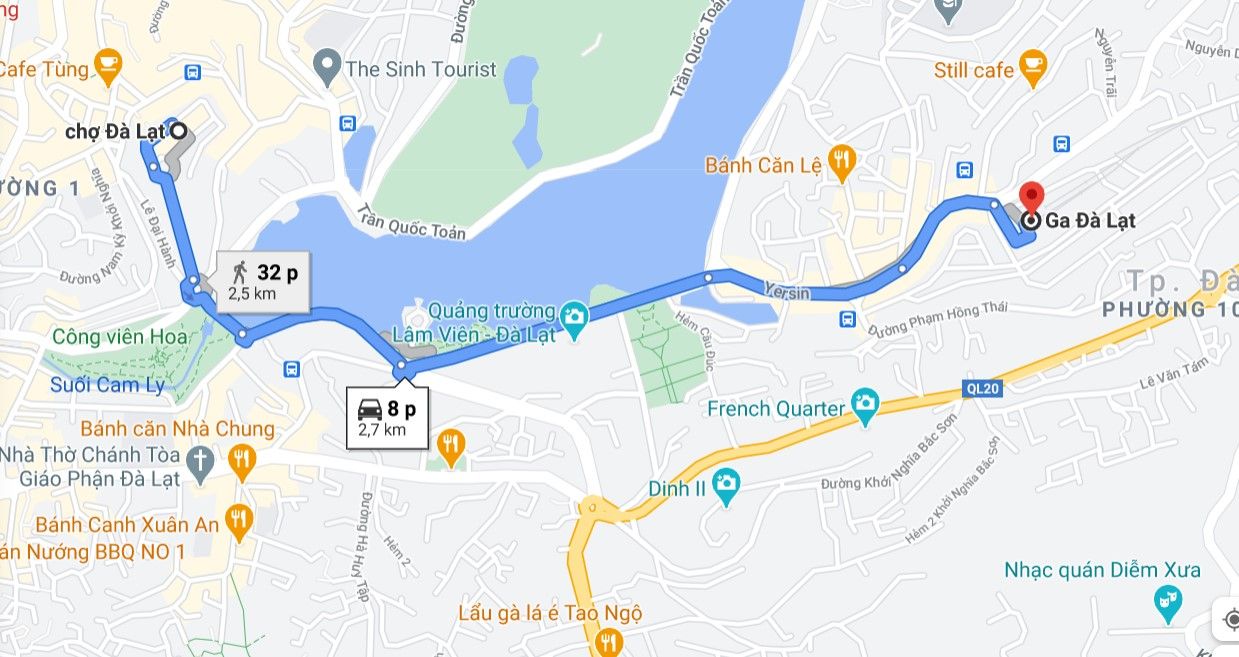 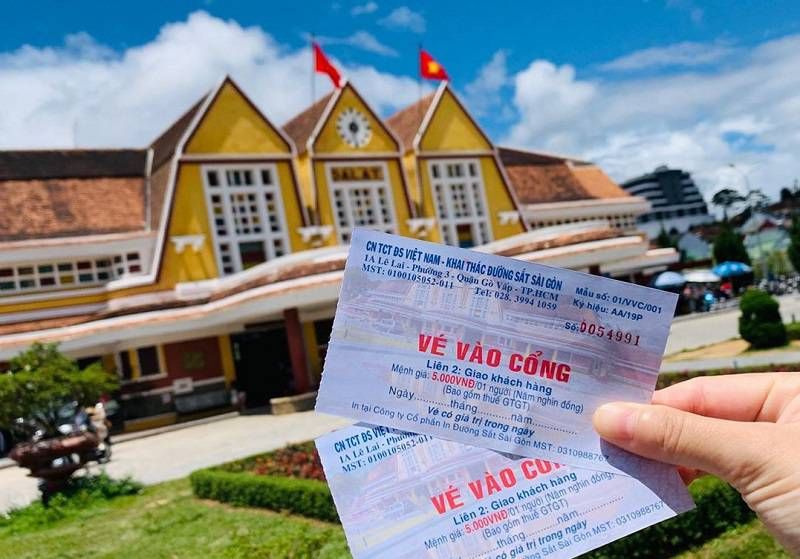 Dalat Railway Station is not a crowded place in the city of thousands of flowers, but it still has an attraction thanks to its meaningful historical values. This is definitely a place you should not miss when coming to “the dreamy Da Lat”.