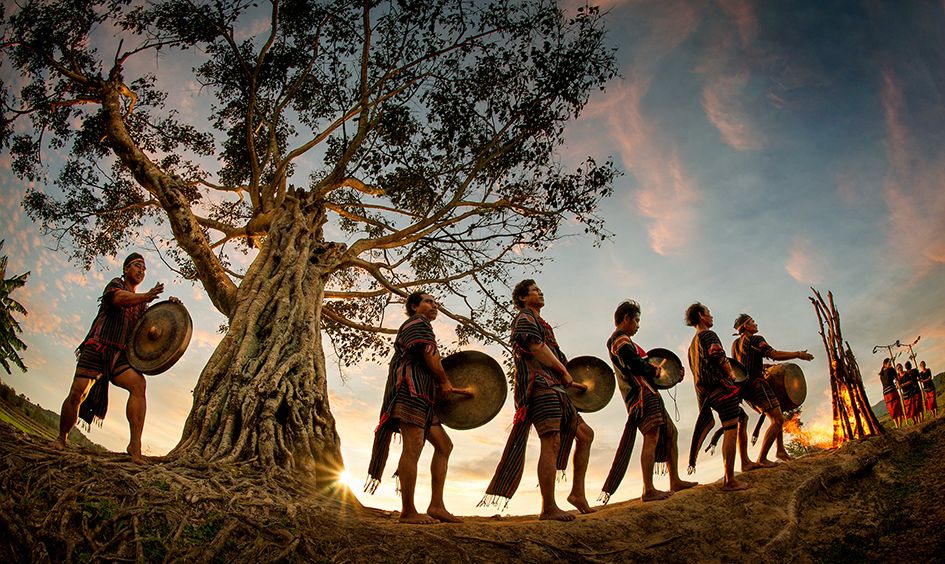 The Central Highlands is not only “the land of wind and sunlight”, but it is also the land of traditional festivals of different ethnic groups. Here are three regional typical festivals that can leave you a strong impression.

Gong Festival of the Central Highlands

Time: The Gong Festival of the Central Highlands is held every year without a specific time. In 2018, it took place from November 30 to December 2. 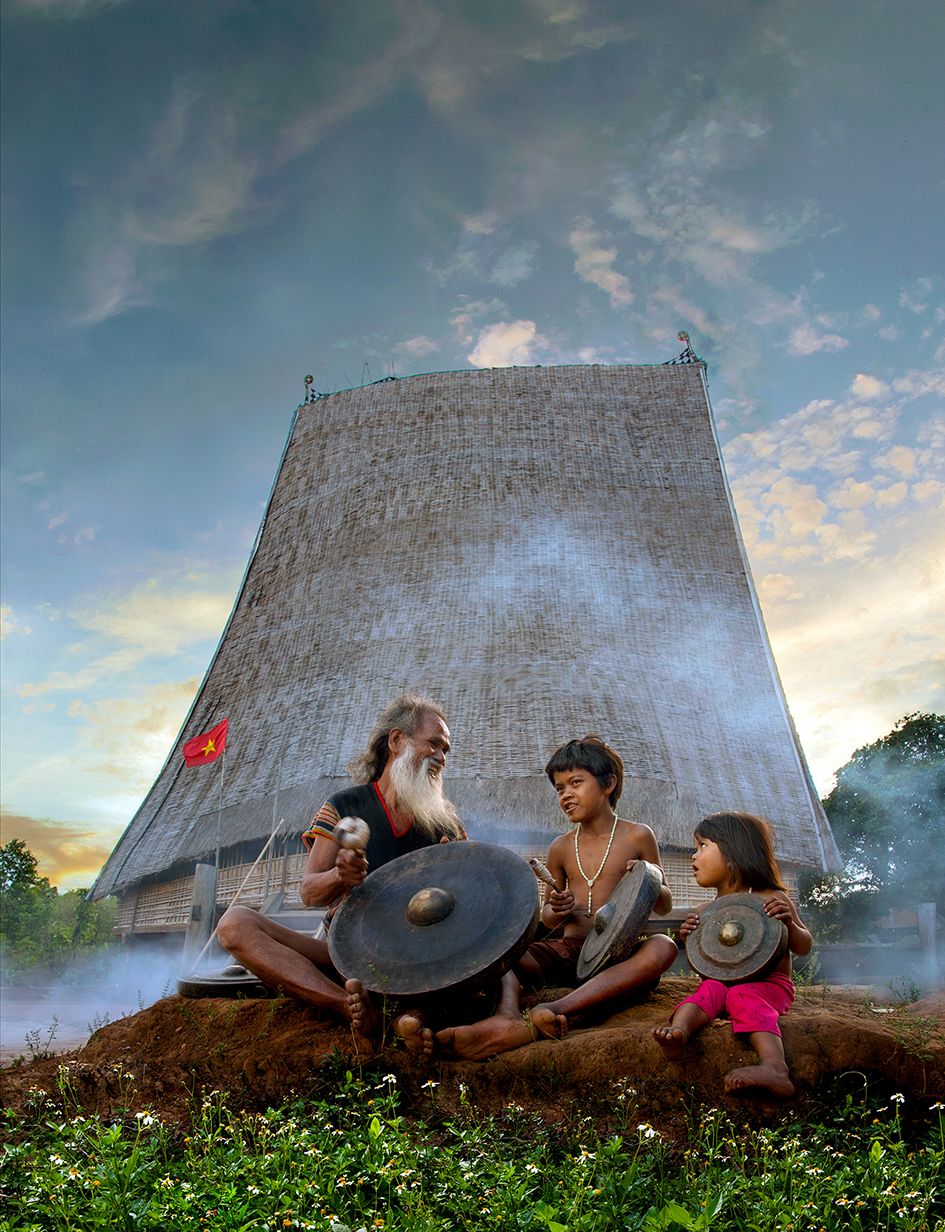 Gongs have a long-standing sacred meaning to people in the Central Highlands. Photo: Bao Hung

In terms of origin, the gong is considered a "descendant" of lithophone. Before the bronze age, the ancients used stone instruments, especially stone gongs, however as time passed bronze gongs were created and used more frequently. Up to now, this kind of instrument has been used in many important ceremonies of the Central Highlands people, such as the Xuong Dong ceremony (to pray for a fruitful crop), New Rice festival (to celebrate a new crop), Thoi Tai ceremony (to pray for luck and health for babies, give name for them, and give thanks to the gods), and Dam Trau ceremony (to worship gods and celebrate victories/fruitful harvest/important events).

The Gong Festival of the Central Highlands is an important festival recognized by UNESCO as an oral and intangible heritage of humanity. In the festival, people use gongs as the only means to communicate with gods, harmonize with “heaven and earth”, and interact with others in the community. Prof. To Ngoc Thanh noted: "A sense of grandeur and sacredness will arise when we listen to the sounds of Gia Rai and Bahnar gongs". 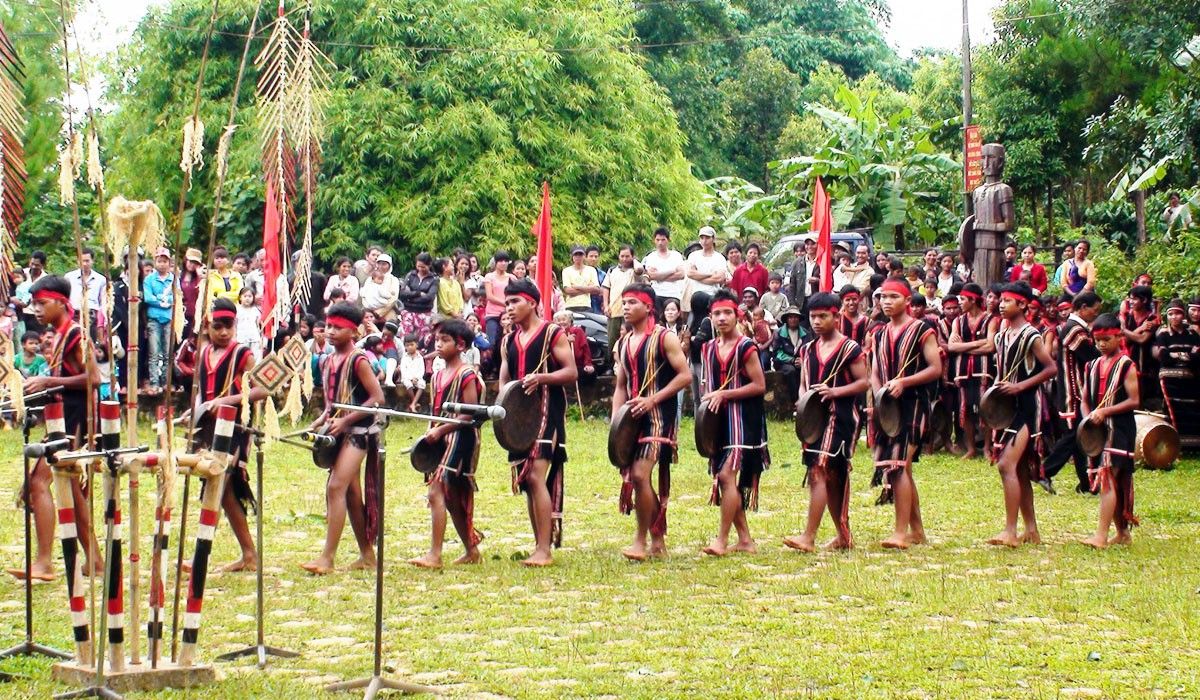 When coming to the festival, you will be able to experience different “emotions” due to the melody from the gongs performed by dozens of people in the Central Highlands. The melody is sometimes heroic, but sometimes is gentle - which is very harmonious with the flickering light of the fire. The dance with gongs is not only to pray for prosperity and fruitful harvests, but it also connects people together. 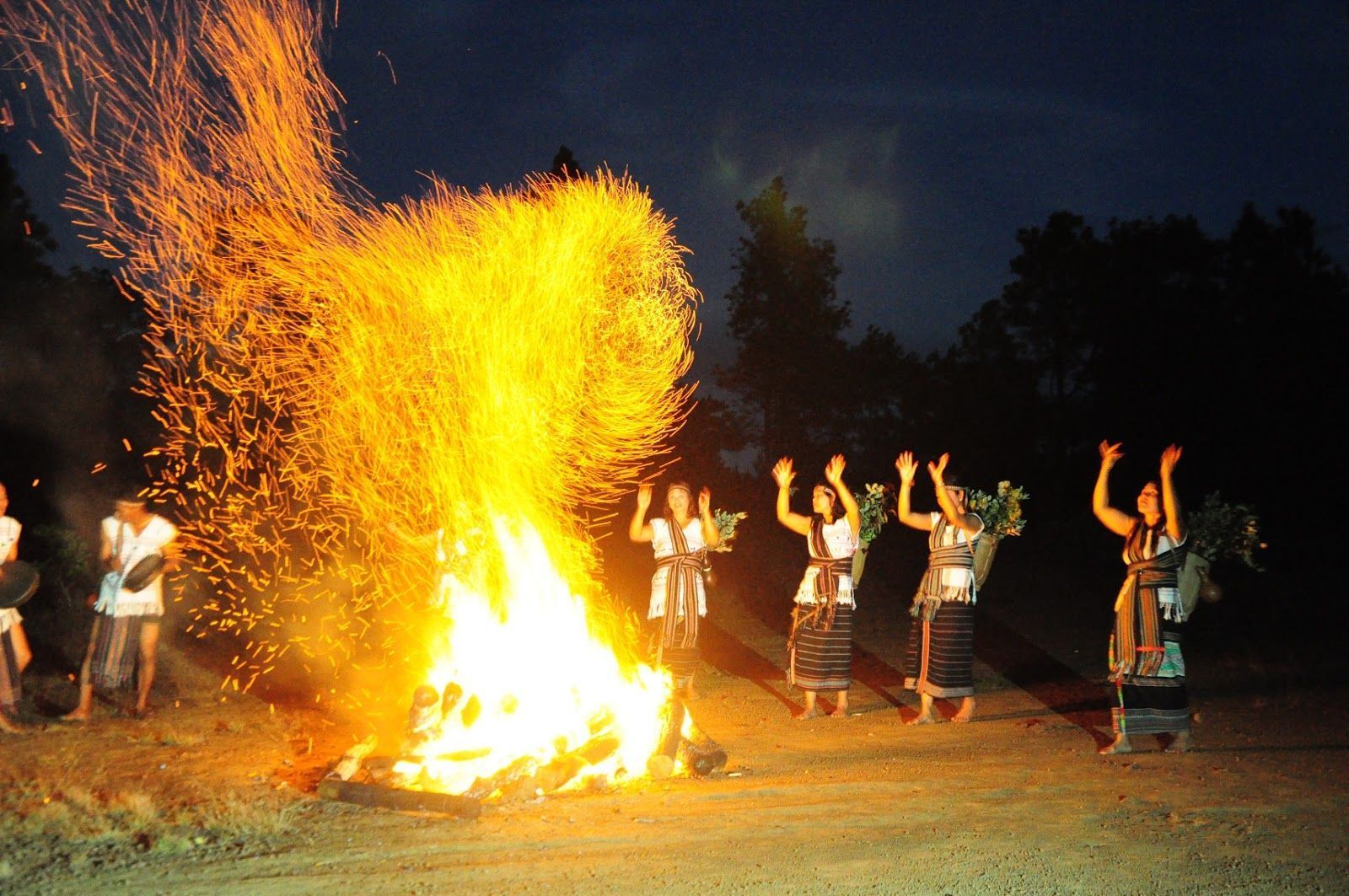 When participating in the Gong Festival, you will have the opportunity to see the artists reenact their traditional culture by means of knitting, brocade weaving, folk singing, historical plays, statue carving, etc. The festival is also a place to introduce specialties of the Central Highlands to you, such as grilled chicken, dried pho, rice in bamboo tubes, grilled meat, forest bamboo shoots, cassava vegetables and bitter eggplant, sun-dried beef, Se San river fish, leaf salad, Jiaogulan, and typical drinks (coffee, Can wine).

Mr. N'Thu K'Nul (1828-1938) is considered the “legend” of this field with the title of "The King of Elephant Domestication” conferred by the Royal Family of Thailand. At the same time, he is the “father” of elephant taming in Don Village and used to be a powerful chief respected by many ethnic groups. 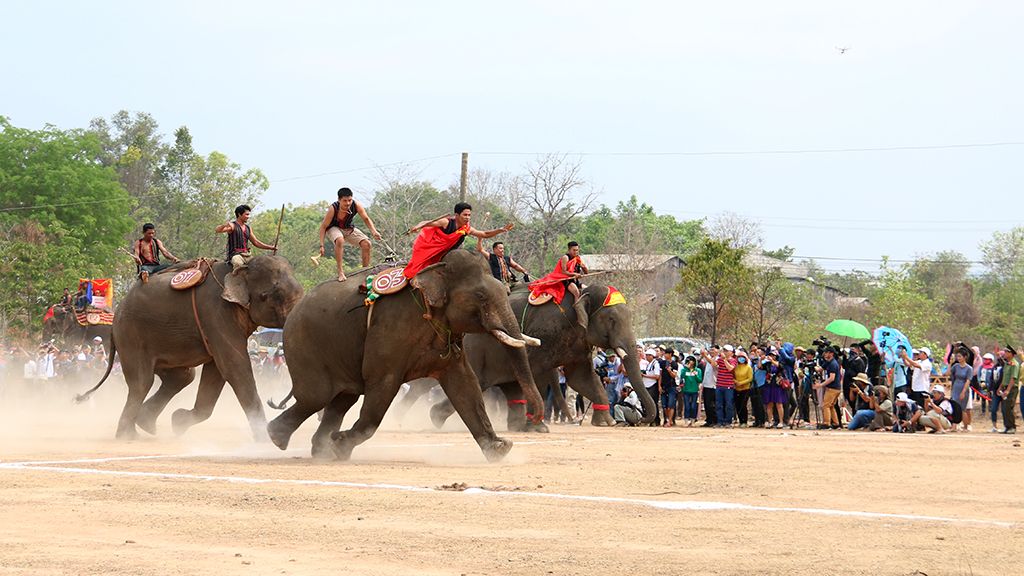 The festival is usually held in a large and flat area with few trees in Yok Don National Park or in a clearing along the Serepok River, with the participants of 10-15 elephants arranged in a row. Before starting the race, elephants will raise their trunks and then lower them to greet everyone. After the signals from the horn, the elephants jump up and run straight ahead. While the short track is about 400-500m, the track is about 1-2km long. There are 2 jockeys sitting on an elephant to control it to run in the right direction, speed it up, slow it down, or maintain its strength, etc. In addition to elephant racing, there is an elephant swimming contest across the Serepok River. The locals say that before the festival, elephants will be taken good care of on green pastures and will not be made to do anything. 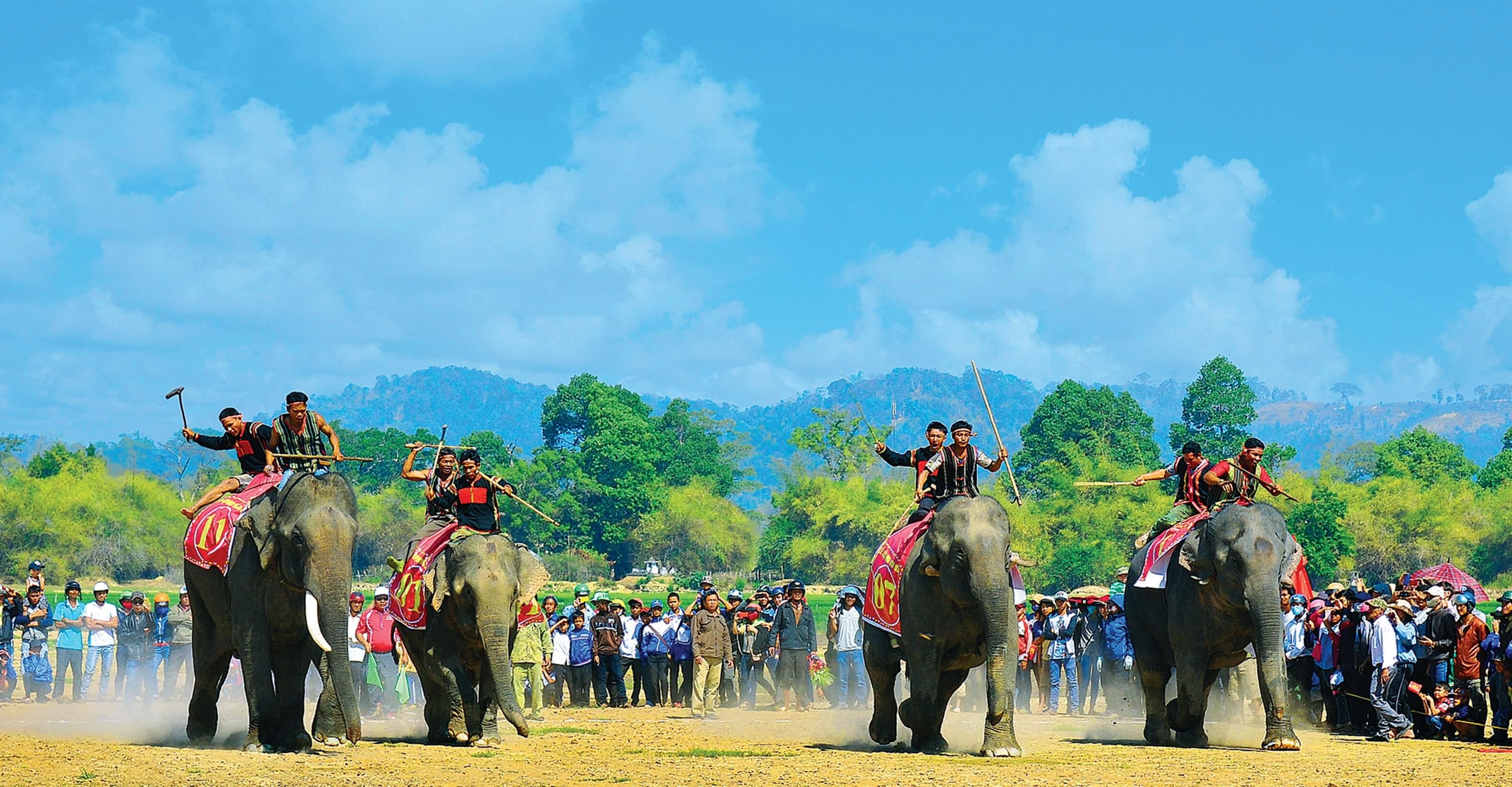 The exciting atmosphere of the elephant racing festival. Photo: zing.vn

The festival is not only exciting with gongs and cheers, but it is also colorful with the costumes of many ethnic spectators. Traditionally, only wealthy families owned domesticated elephants from wild ones. The elephant represents the strength of the tribe as well as the prosperity of the family. Currently, only the Central Highlands has elephants and their population is significantly decreasing.

Time: Elephant Racing Festival is held every 2 years in March (lunar calendar), which is the dry season with beautiful sunshine and unwetted roads. 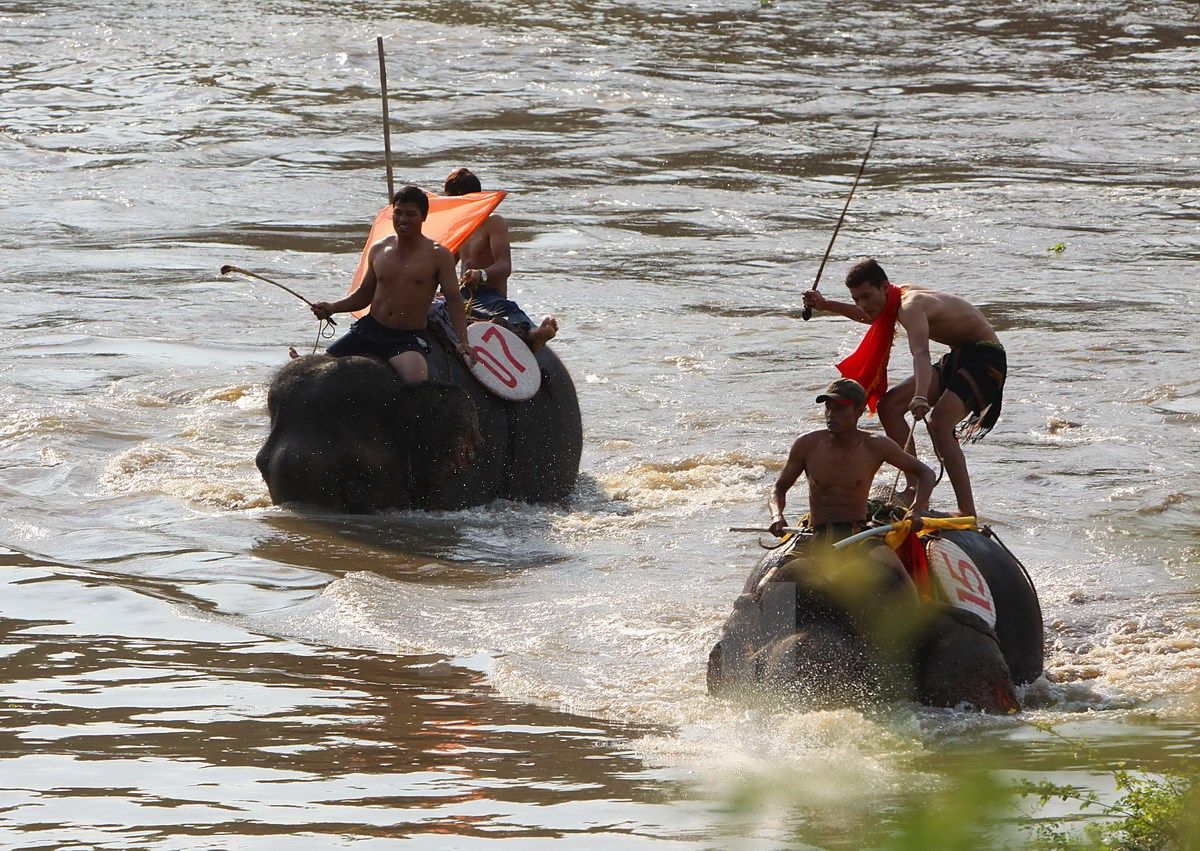 The most challenging part for the elephants is to cross the Serepok River. Photo: baobinhphuoc.com.vn

The New Rice Festival is a long-standing traditional festival of the people in the Central Highlands to honour the rice grain, which is believed to be given by Giang (Heaven). The festival is not held at a specific time as it is based on each family’s decision. The scale of the festival will depend on how much rice the family can harvest, and it may last in one or several days. This is also an opportunity for each family to invite relatives and friends from neighboring villages to come to their home. The more people the family can invite, the more lucky they are. This festival not only worships gods and ancestors with the desire to pray for health, but it is also the opportunity for the locals to play gongs and sing on many days and nights. 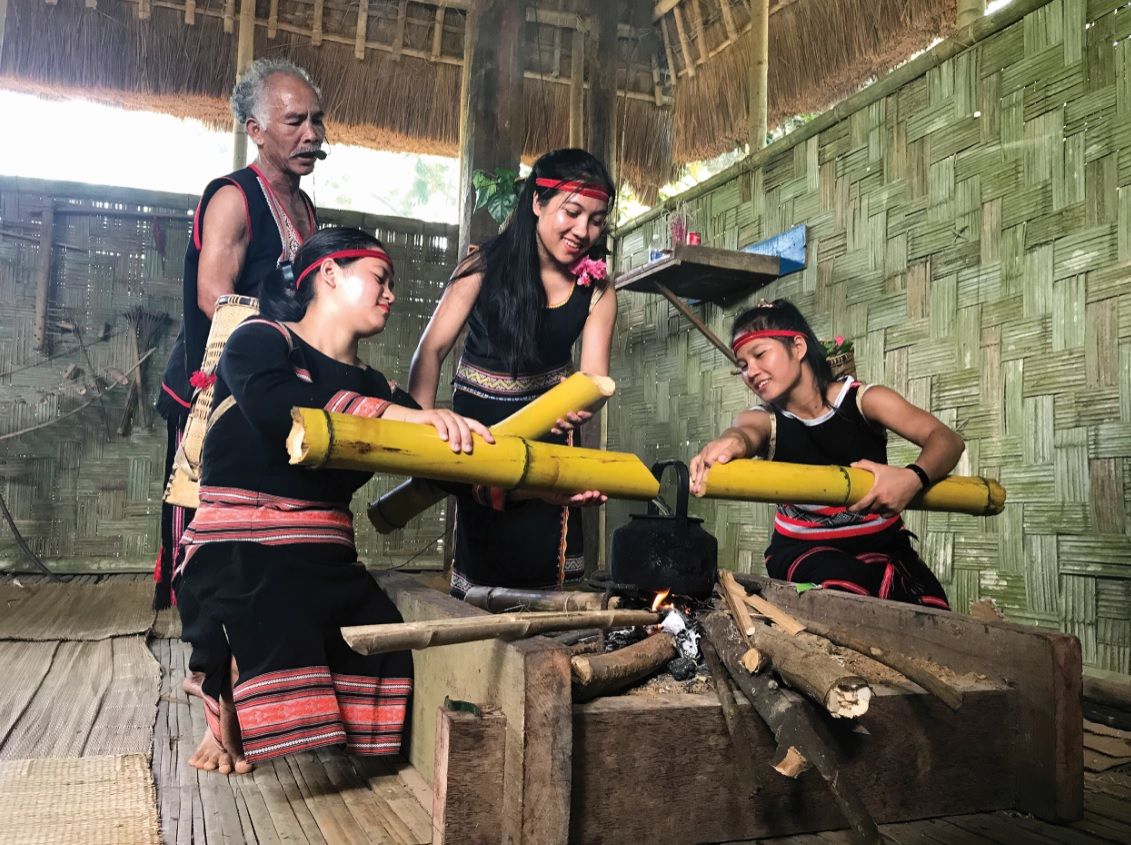 People prepare food and offerings together for the New Rice Festival. Photo: baodantoc.vn

For the Ede people, the festival takes place when all of the rice on the terraced fields has been brought to the warehouse. It is important to note that this New Rice Festival will be held in turn from house to house. While the men will butcher pork/chicken and make Can wine, the women will prepare the food.

Meanwhile, for the Ma people, this festival is also known as the “New Rice Eating Ceremony”, which is pronounced "Du rê" in their language and is usually held at the end of the year. The sacrifices in the festival are usually animals such as chickens, pigs, goats and buffaloes. In some areas, the ceremony is held when the first grains of rice are gathered, while some villages choose to worship the gods at the end of the harvest. The sooner the family finishes their harvest, the sooner the festival is held. 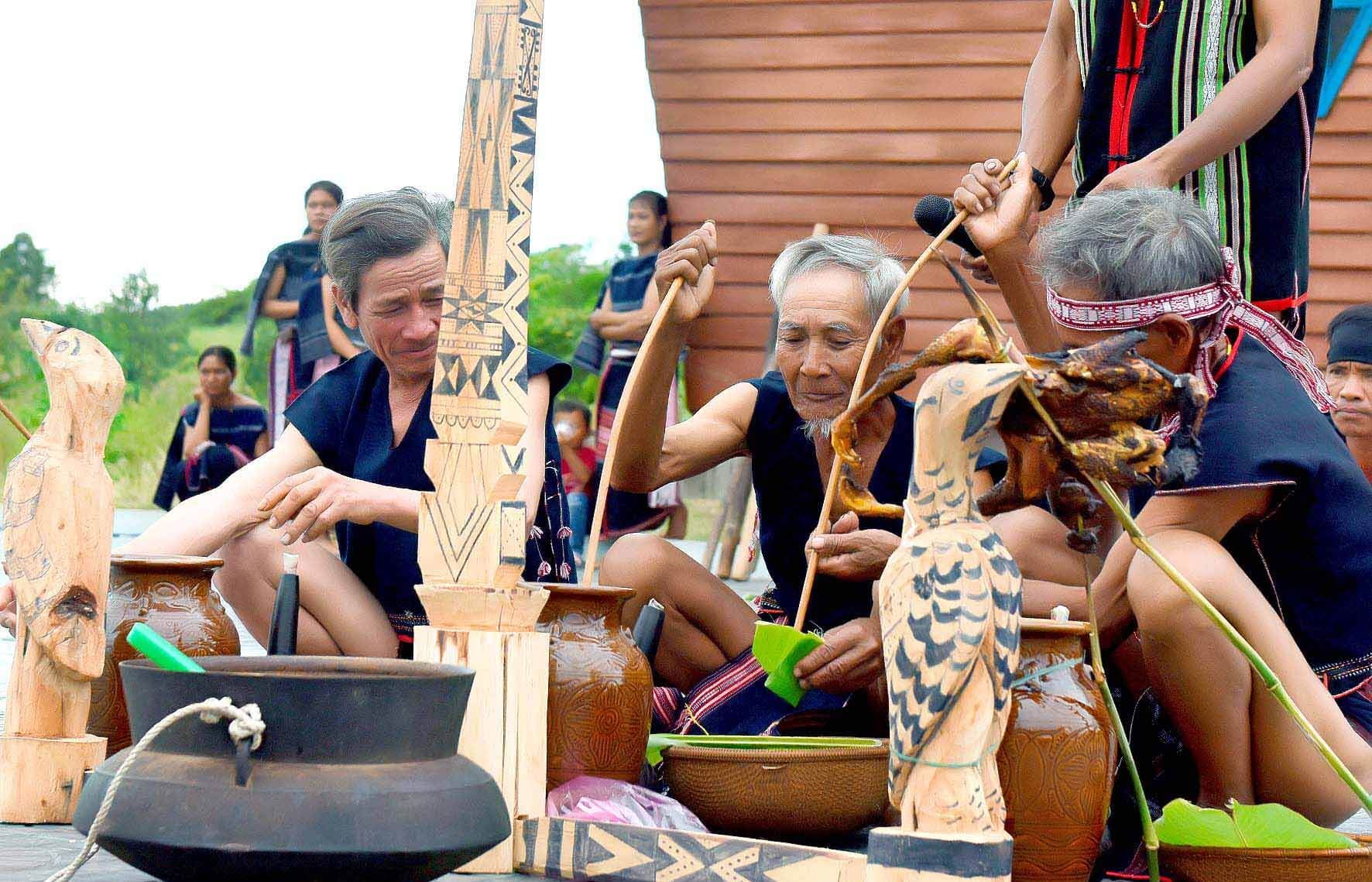 The village elders are the ones who perform the worshiping ceremony during the festival. Photo: baogialai.com.vn 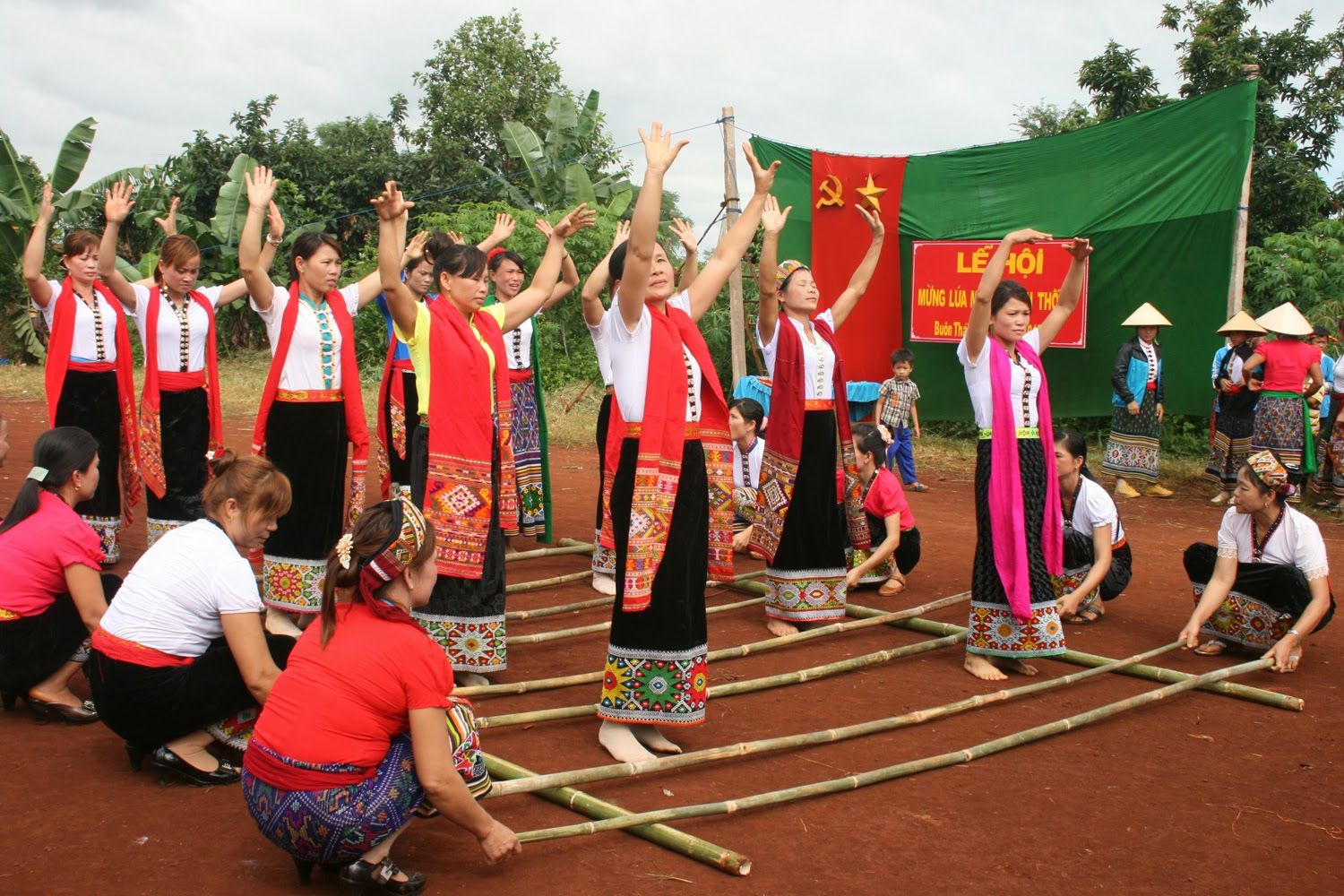 The Xo Dang people often hold a festival to celebrate the new rice when it is ripe. The festival is usually divided into two parts, namely a celebration at home and a celebration in the community. The new rice celebration in the community will be held at the communal house, where families will bring offerings, such as pork, chicken, and new rice. Weirdly, the offerings include some rats as the locals hope that they will not destroy the crops in the following year. When worshiping, the village elder will report to the gods about the situation of agricultural production of the current year and then pray for the next crop not to be destroyed by wild animals or not affected by disease/natural disasters. After that, everyone will eat new rice and drink Can wine. Finally, after the village elders and people go to each house to give their wishes for the new rice crop, the ceremony will finish. Families also organize their own ceremony to eat new rice, drink Can wine, play gongs, dance and sing jubilantly. Rice will be thrown around their house as the Xo Dang perceive that by doing so, the next crop will be bountiful.

Time: After the harvest at the beginning of the new year of the solar calendar.

Location: At the communal house or the private house of each family 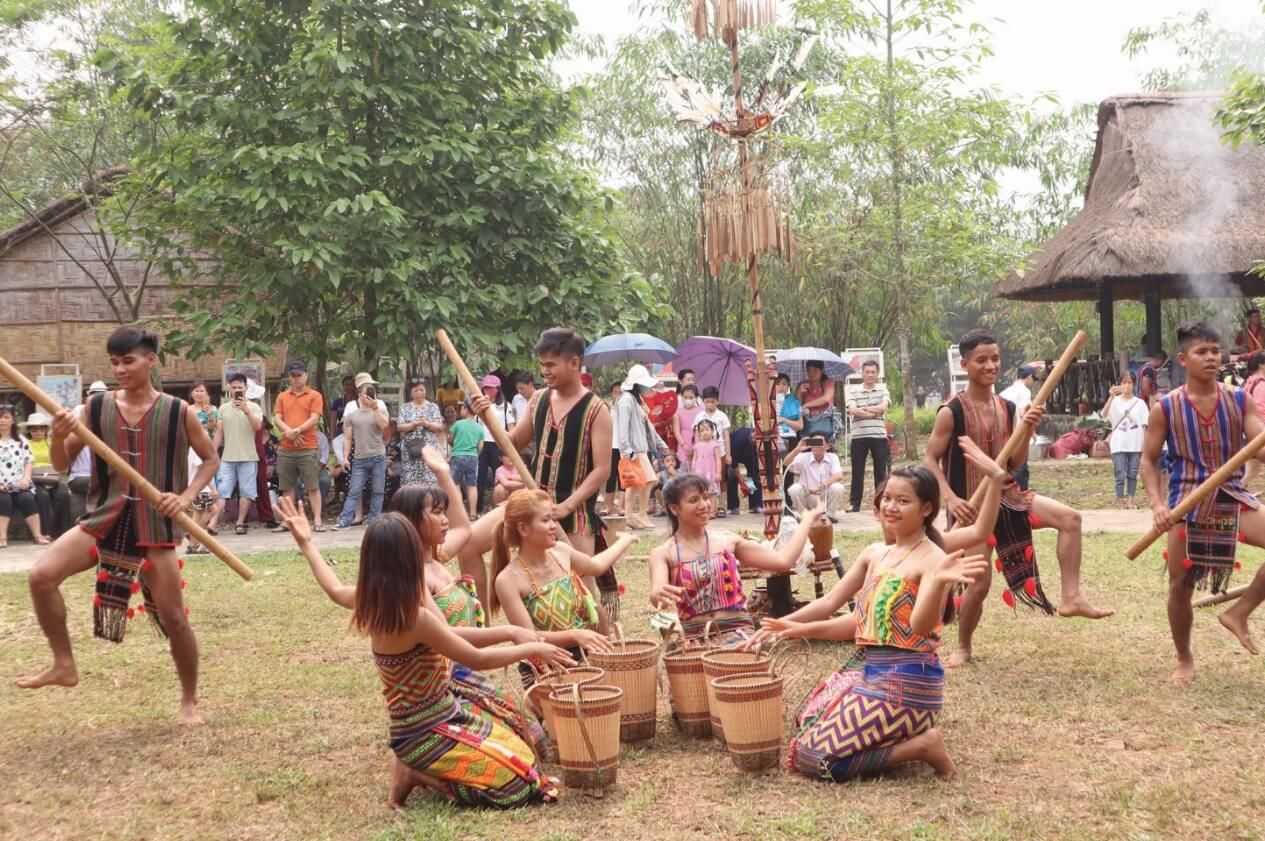 The bustling scene of the New Rice Festival. Photo: Daklak.city

The Central Highlands is not only a wild land with “thousands of mountains and forests”, but it also has unique festivals imbued with ethnic cultures and identities. Participate in these festivals and you will definitely be strongly impressed with very exciting activities.