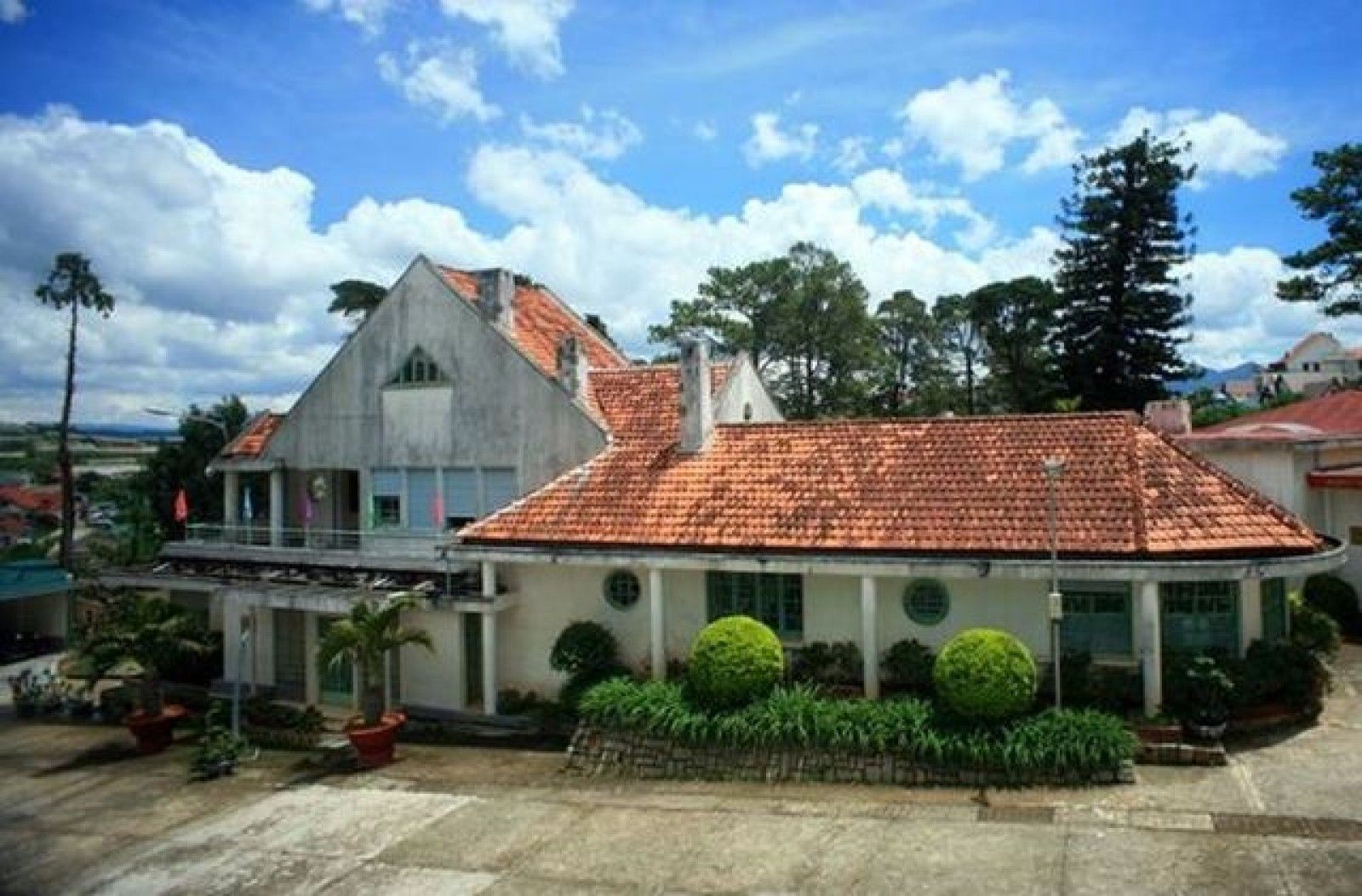 Discovering the mysterious palace with a shelter in Da Lat city

Tran Le Xuan palace is a destination you should visit when coming to Da Lat. This luxurious palace with typical French architecture used to belong to an official under the Ngo Dinh Diem regime.

The history of the palace

Tran Le Xuan palace, which is located at 2 Yet Kieu Street - Da Lat City, was built in 1958 to serve as a resting place for the advisor Ngo Dinh Nhu (the younger brother of President Ngo Dinh Diem) and his wife (Ms. Tran Le Xuan) during the Republic of Vietnam period. It was known as the "the best palace of Vietnam" due to its magnificence and luxury. 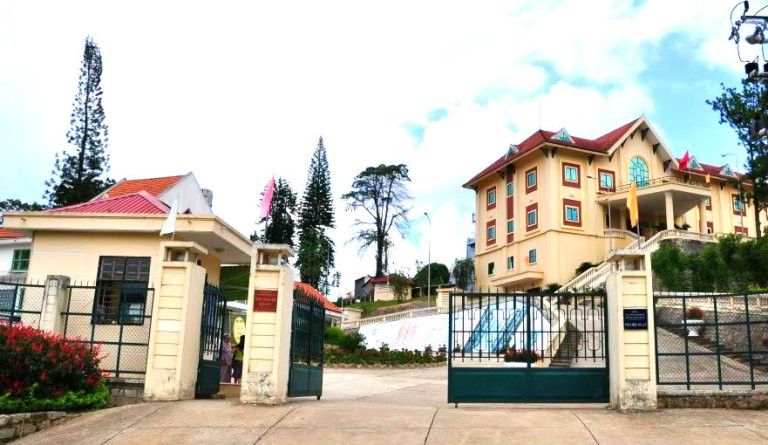 The facade of the palace. Photo: Vinhdeloctravel.com.vn

According to the elders in this area, when the Ngo family took control over the country, no one was allowed to visit Tran Le Xuan palace - everything inside was a mystery. This place was also strictly guarded with dozens of guards around. 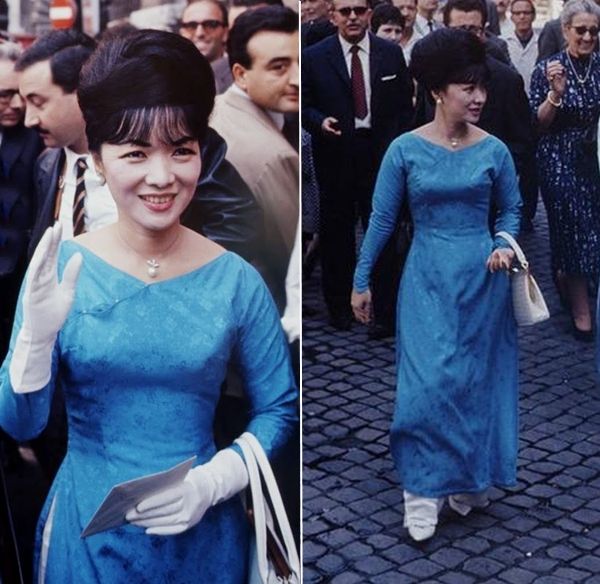 After Mr. Ngo Dinh Nhu was murdered, Ms. Tran Le Xuan moved to France. That is why the abandoned palace then became a tourist attraction. After that, the palace was utilised as the Central Highlands Ethnic Museum and today it has become the National Archive Center IV, where the Woodblocks of the Nguyen Dynasty are kept. 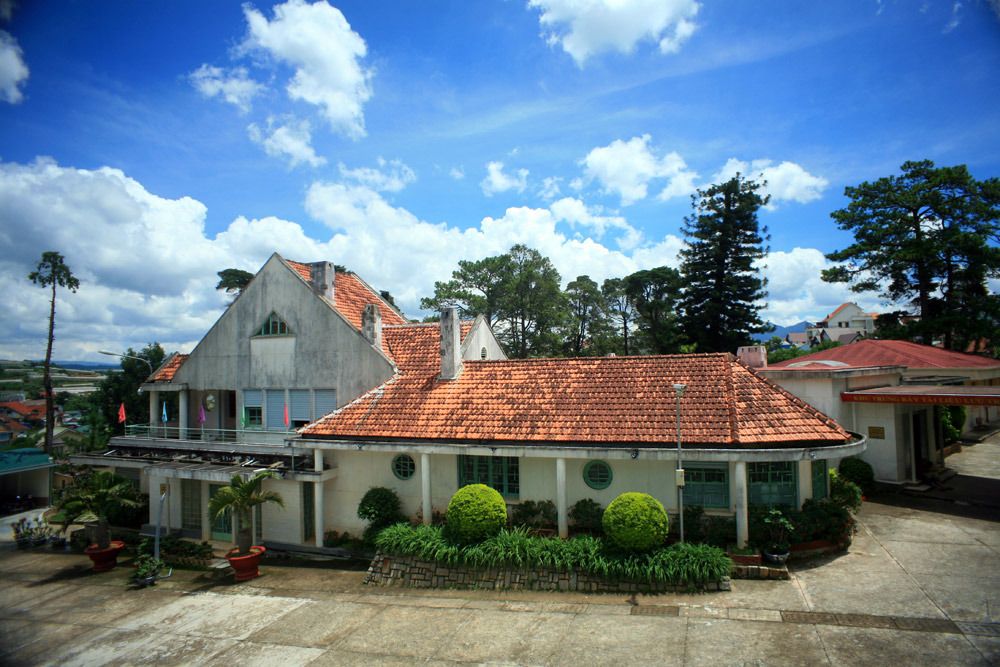 It was known as the "the best palace of Vietnam" due to its magnificence and luxury. Photo: redsvn

When coming here, you will be overwhelmed by the magnificence of the palace and have the opportunity to listen to explanations about the pictures illustrating the life of Ms. Tran Le Xuan.

The palace is located on a vast pine hill, covering an area of up to 13,000m2. The architectural complex features the aristocratic style in the past, which can partly show the regal life of the superior in Ngo Dinh Diem's regime. The palace consists of 3 villas with different uses, but the common feature is that they are all given beautiful names, which are Lam Ngoc (Sapphire), Bach Ngoc (Onyx) and Hong Ngoc (Ruby). 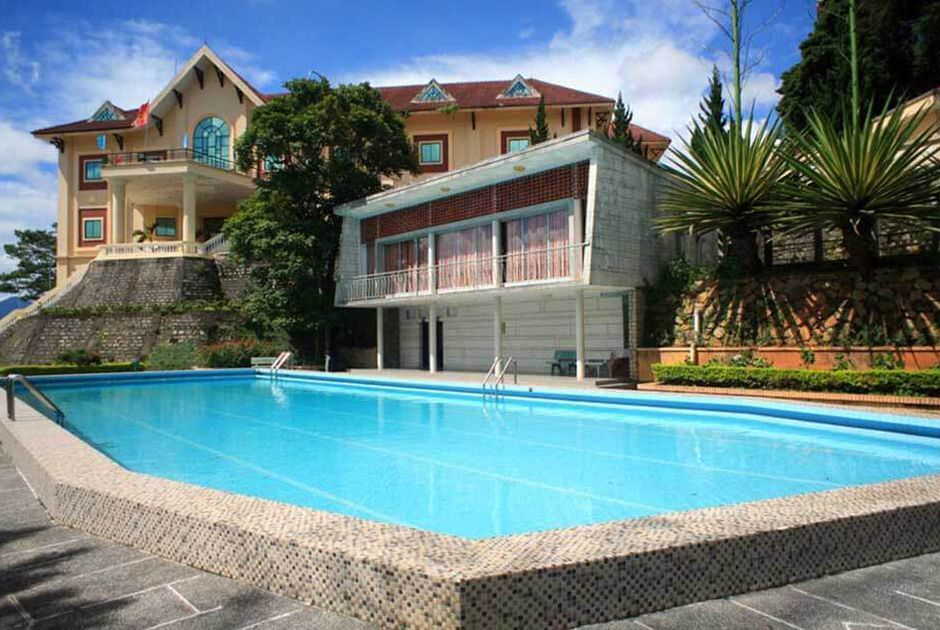 Bach Ngoc was built and decorated lavishly and it is also the most magnificent villa among the three ones. This was used as a place to hold entertaining activities for Mrs. Tran Le Xuan's family and senior officers. The villa faces Yet Kieu Street and has a long staircase with a sophisticated and luxurious design. In front of the villa is a 1.2-2.2m deep pool with a capacity of 300m3. This was the only heated swimming pool in South Vietnam at that time. 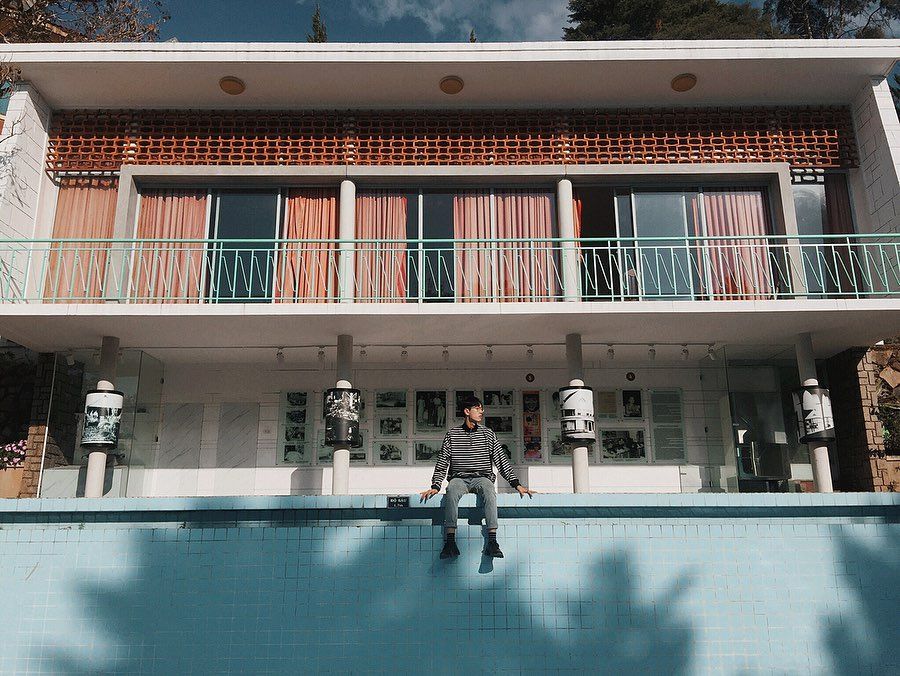 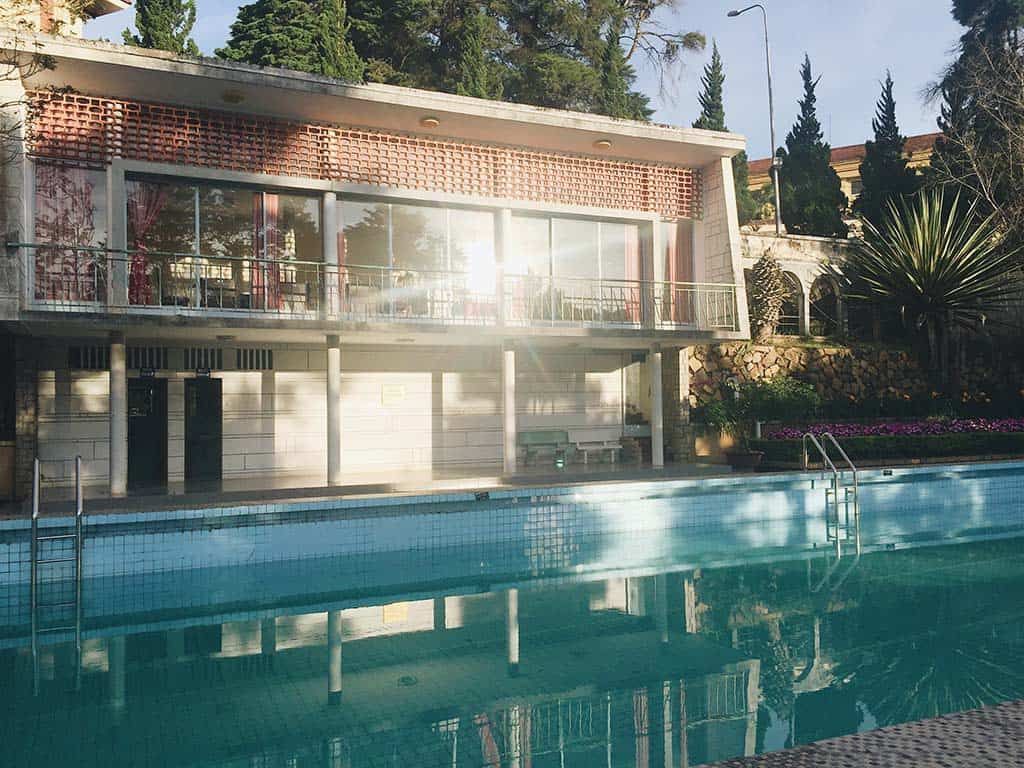 The pool in front of Bach Ngoc villa was the only heated swimming pool in South Vietnam at that time. Photo: Tu Uyen

Lam Ngoc is not far from Bach Ngoc villa, and it consists of two buildings built in French architecture with red tile roofs, chimneys, fireplaces and many windows. The villa has a zigzag shape, consisting of many large and small rooms connected together. Each room is equipped with a modern French fireplace system at that time. 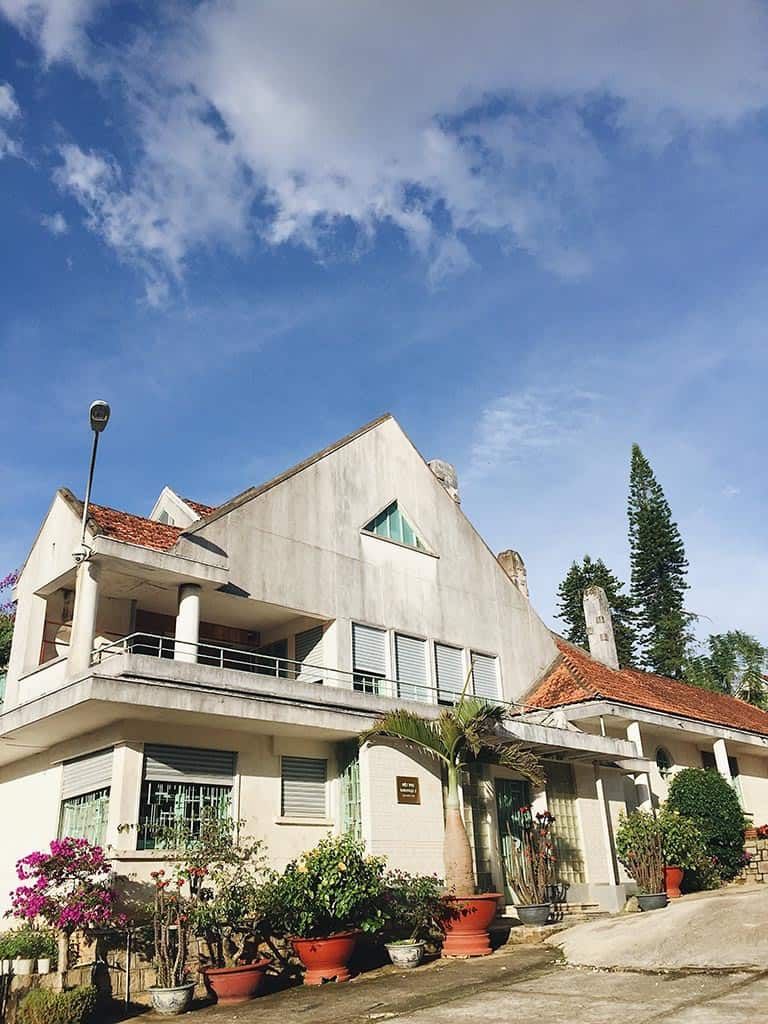 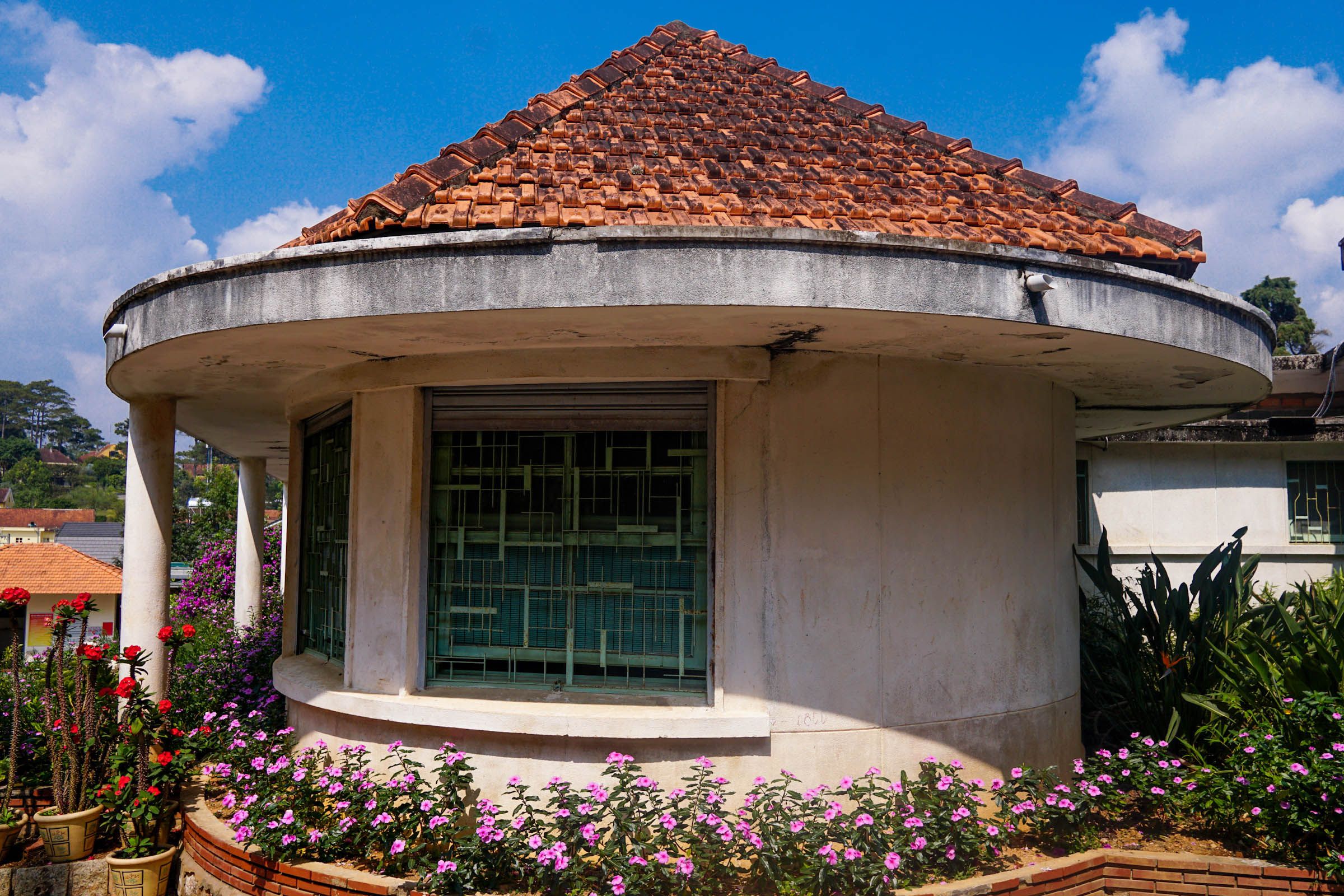 One of the two buildings of Lam Ngoc villa. Photo: Vnexpress 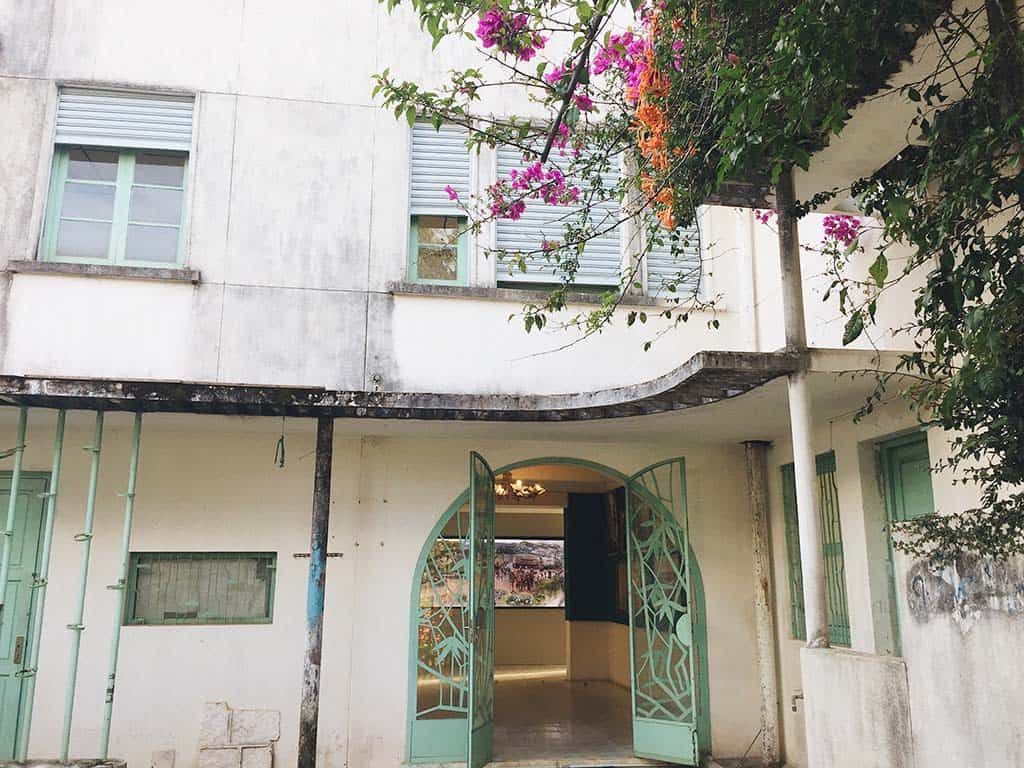 In this villa, there is an escape tunnel and a shelter, which is made of a special steel which can withstand the destructive power of heavy weapons, while the glass doors are bulletproof. This shelter (with many bookshelves and safes inside) can accommodate about 10 people. With a solid design and a shelter, it is said that this villa was a place to store the important plans and secrets of the owner. In other words, it is the most important place in the Tran Le Xuan palace. 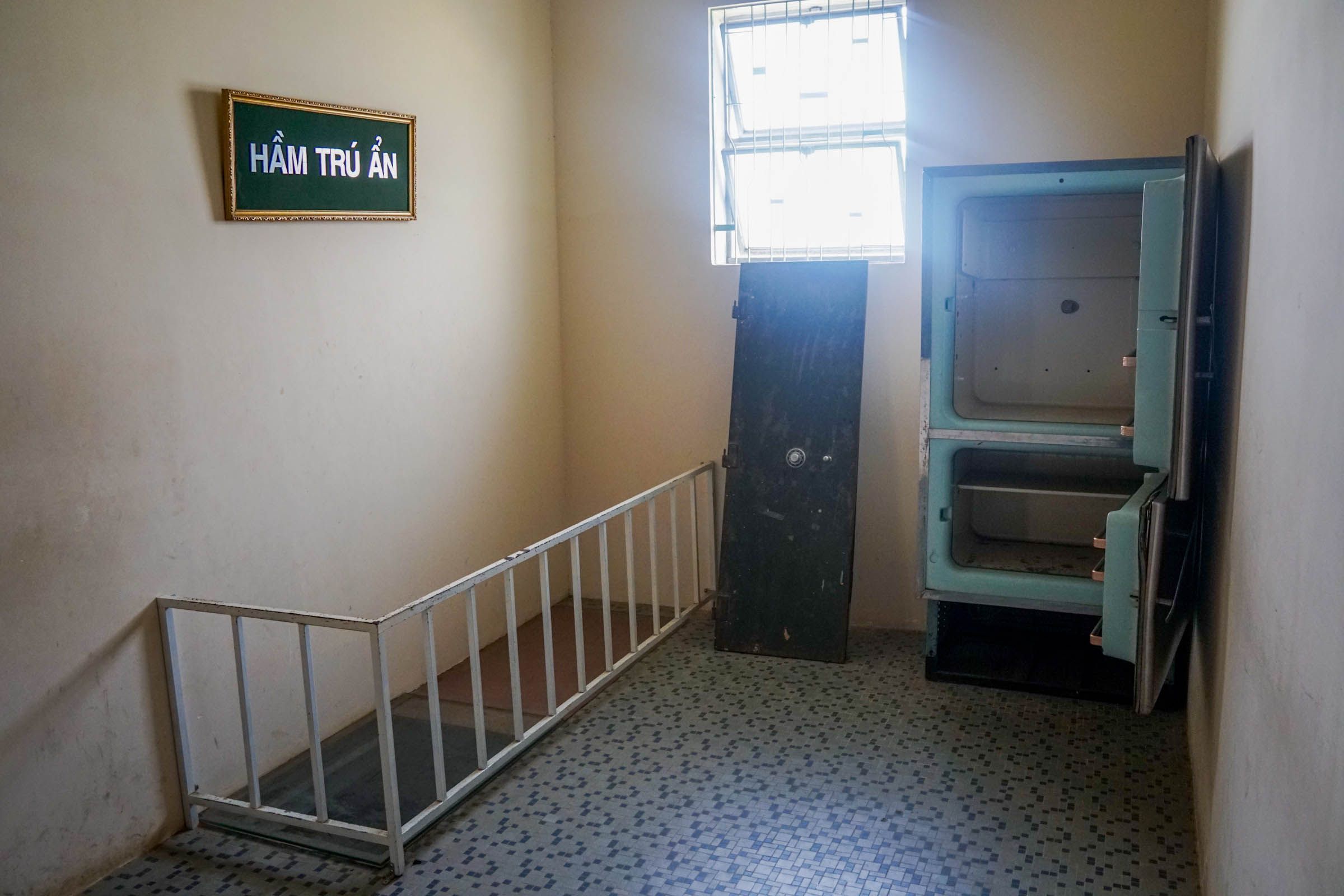 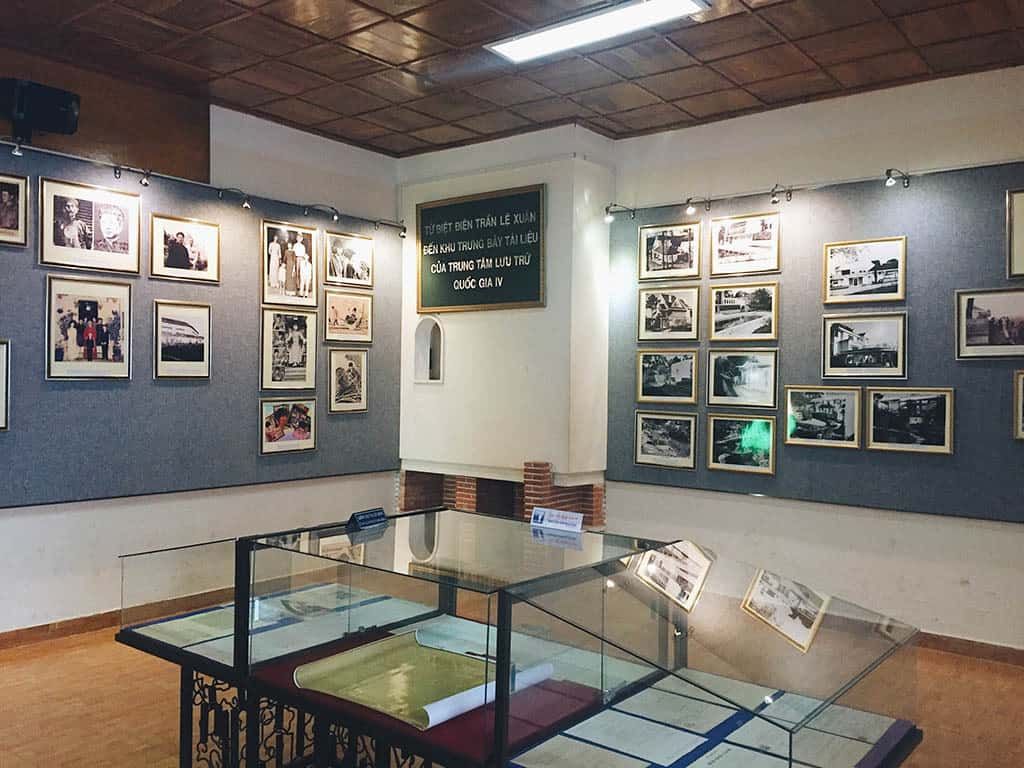 The gallery in Lam Ngoc villa has many documents and pictures. Photo: traveloka

From Bach Ngoc, follow the small road and you will arrive at Hong Ngoc villa. This villa is separate from the other two villas as Ms. Tran Le Xuan gave it to her father - Mr. Tran Van Chuong - who was the Ambassador of the Republic of Vietnam to the US at that time.

Hong Ngoc Villa has typical French architecture with red tile roofs, chimneys and gray stone. The space around the villa is very peaceful, which is suitable for relaxation. 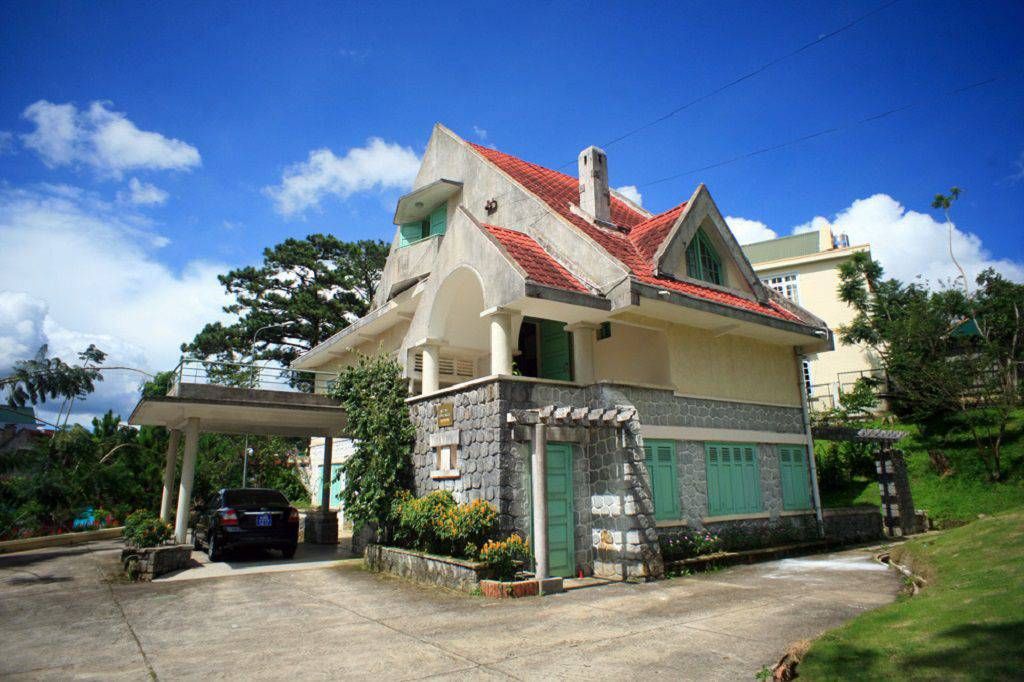 The garden with a poetic scenery 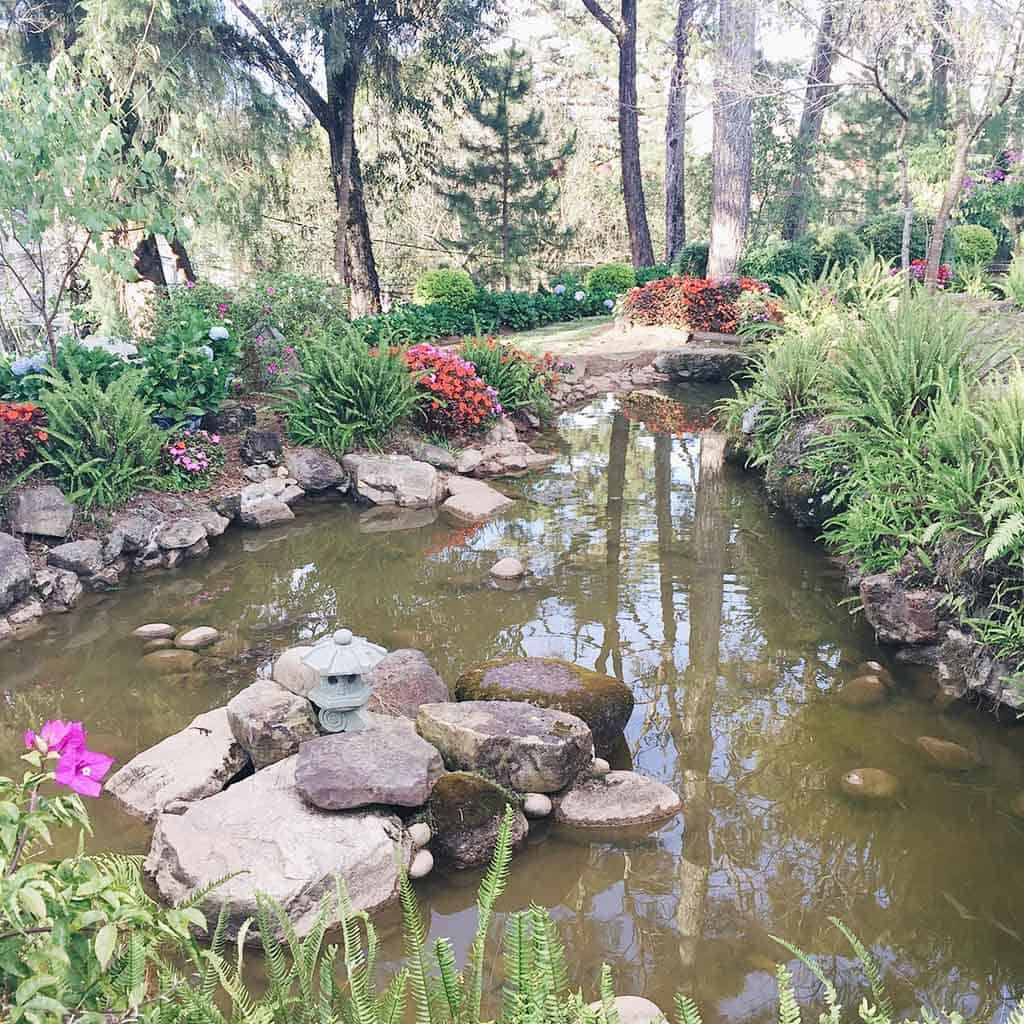 Despite being luxurious and splendid, the space of the palace is still poetic. The entire campus is covered with green trees and many colourful flowers. Among these, the "Japanese garden" stands out with green grass, stone slabs, and beautiful flowers of Da Lat. When the lake is full of water, the map of Vietnam will appear with the raised rocks representing Phu Quoc and Con Dao islands. In the middle of the lake, there is also a cross-section of rocks representing the 17th parallel separating two regions of Vietnam at that time. 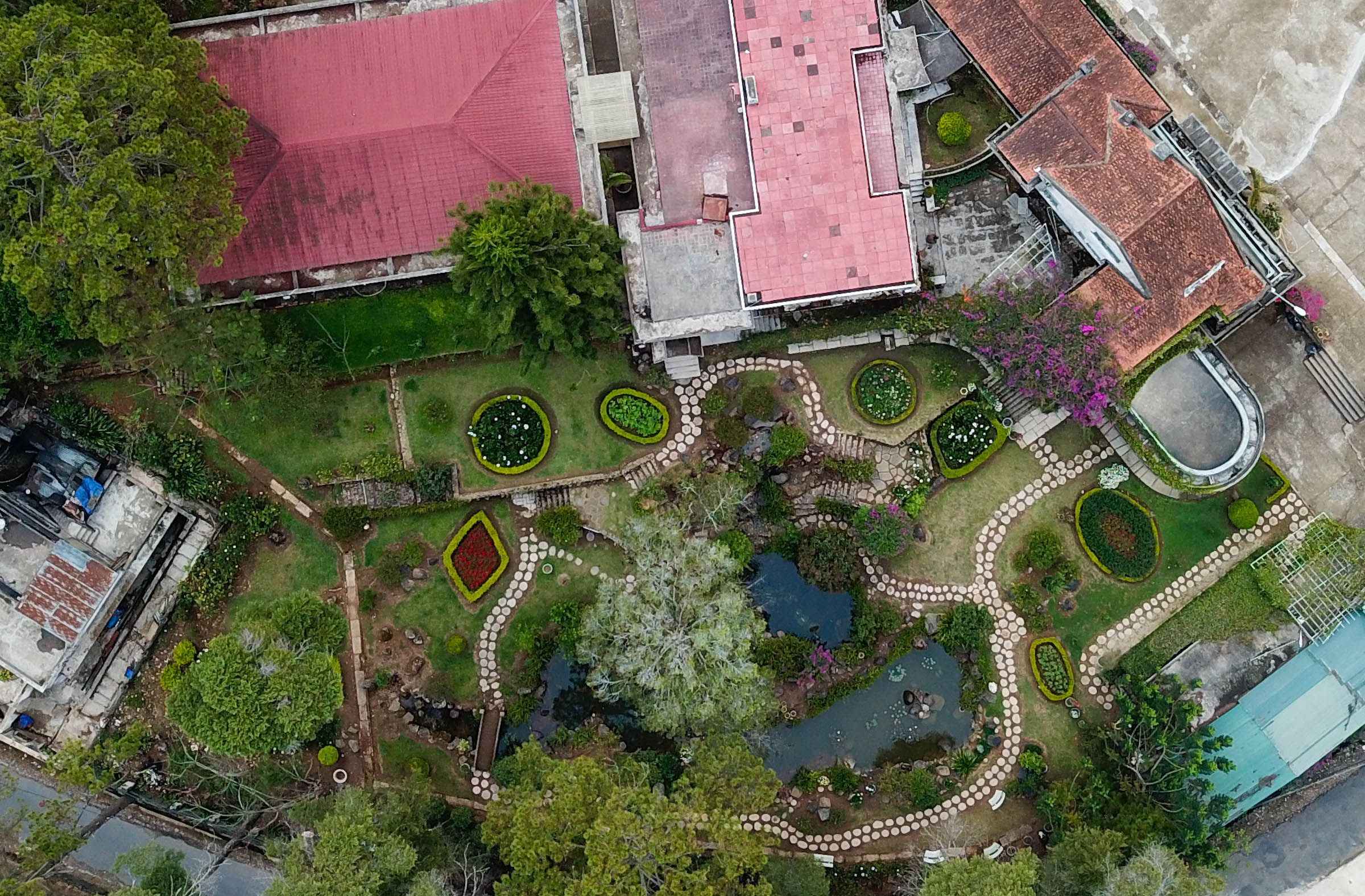 The map of Vietnam will appear when the lake is full of water. Photo: Vnexpress

Tran Le Xuan Palace today becomes the National Archives Center IV and is “home” to nearly 35,000 woodblocks of the Nguyen Dynasty which were recognized by UNESCO as a world documentary heritage. This place also stores other precious documents collected by Mr. Ngo Dinh Nhu

Tran Le Xuan Palace is an evidence for the luxurious life of the superior in Ngo Dinh Diem's regime. When coming here, you can not only admire the works featuring French architecture, but also immerse yourself in the airy campus covered by green trees.