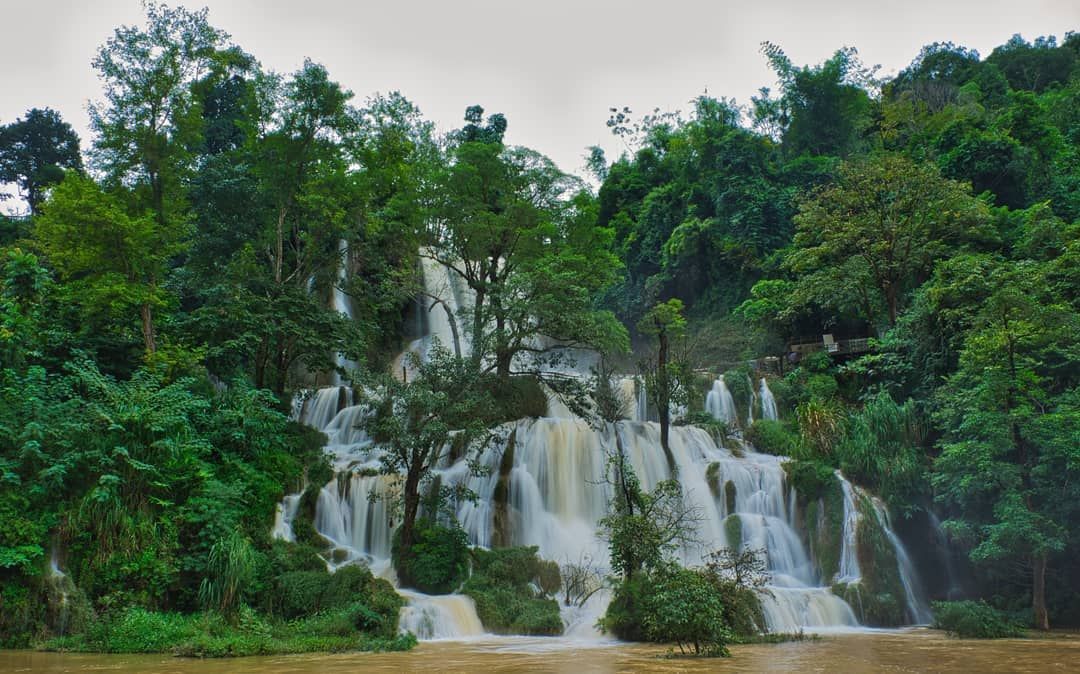 Moc Chau not only has dreamy pine forests, green tea hills or pure white plum flowers, but it is also famous for Dai Yem waterfall. This is one of the destinations that attracts many tourists thanks to its gentle but majestic beauty.

Moc Chau is one of the provinces with many magnificent landscapes in Northwest Vietnam. In addition to owning green tea hills and dreamy white plum flowers, Moc Chau also has the romantic Dai Yem waterfall in the middle of majestic mountains.

Why is the waterfall named “Dai Yem”? 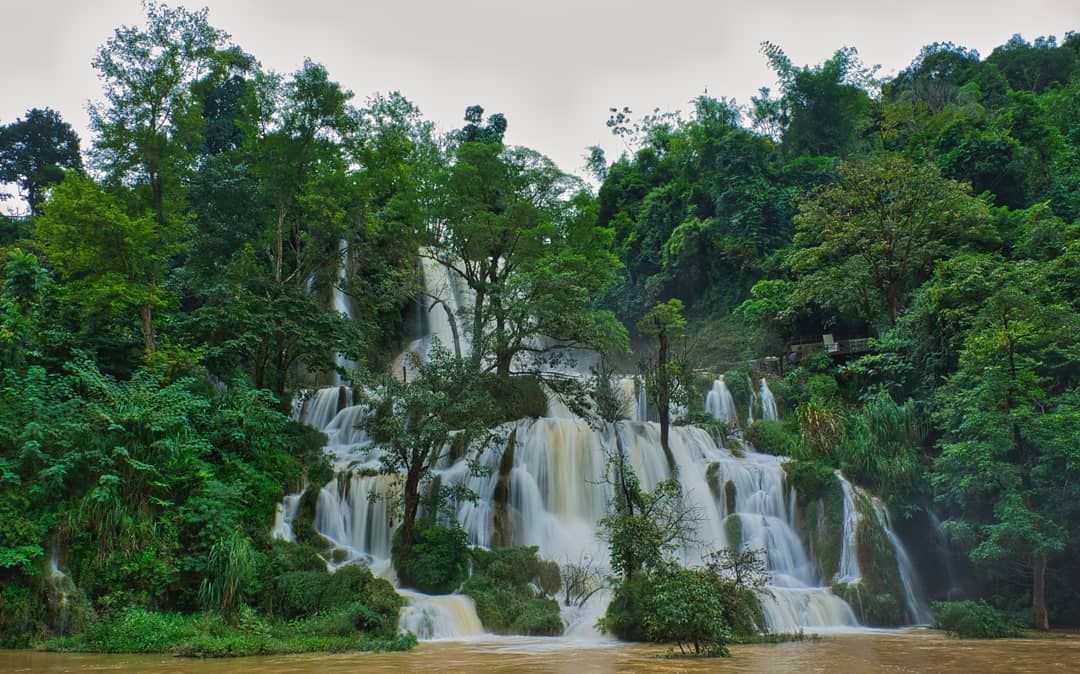 Dai Yem, also known as Ban Vat or Nang, is a waterfall in Village No. 43 (Muong La commune, Moc Chau district, Son La province), about 8km from the center of Moc Chau district. The waterfall is on the Vat stream, which originates from two smaller streams (Bo Co Lam and Bo Ta Chau) of Vat village - a long-standing Thai village. There is a limestone area at the confluence of these two streams, so Dai Yem waterfall was formed due to the flow of water over time.

When the water rushes down, it creates many smaller streams like threads to weave into a Yem (a traditional undershirt of Vietnam), leading to the name “Dai Yem”. At the same time, it was said that there was a girl who visited the waterfall and saw a boy in danger here, so she used her Yem to save him. 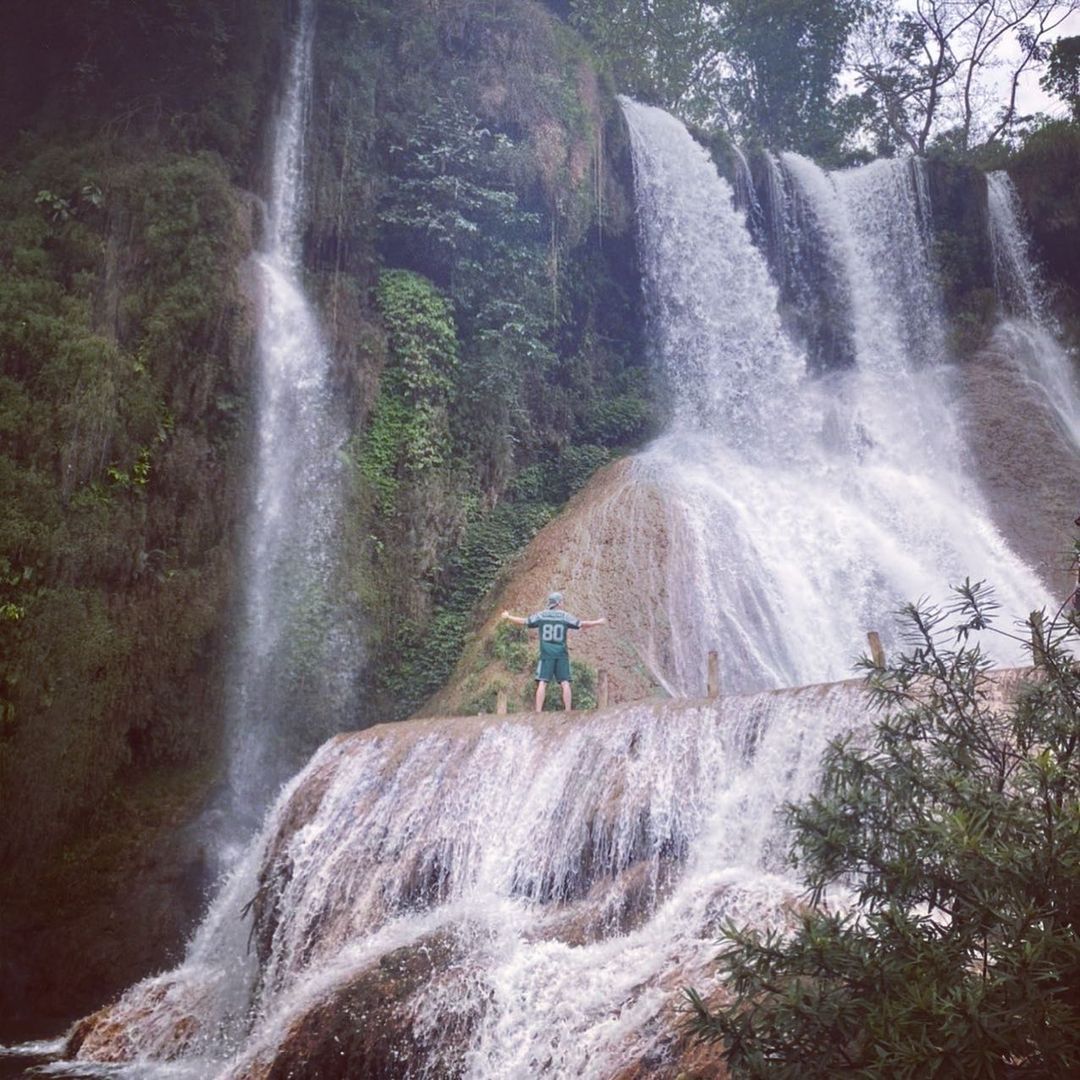 The majestic waterfall is associated with a touching love story. Photo: @trungnguyen2909

Dai Yem waterfall is associated with a touching love story. In the past (when Vat village was still a prosperous land), as troops from the North invaded Laos, their king immediately asked the Vietnamese king to help their country, which made the young people in Vat village participate in the war. At that time, there was a couple who were both orphans; when seeing the boy off on the way to Pu Hang Meo, the girl made an oath that if the boy did not return, the girl would turn into a frog in Na Sai field looking at the way the boy left. The boy also told the girl that he would win the battle and return to meet her in Pu Khao - Pu Hao. When the war ended, all the boys in the Vat village returned, except for the girl's lover, so she decided to sit on the top of the waterfall every afternoon and wait for the boy. One day, as the people did not see her waiting for her lover anymore, they tried to look for her but couldn't find her anywhere. The locals thought that perhaps due to her exhaustion and the slippery waterfall, she stumbled down the water. Due to this touching love story, Dai Yem is also called “Love Waterfall” by the locals.

What is special about Dai Yem Waterfall? 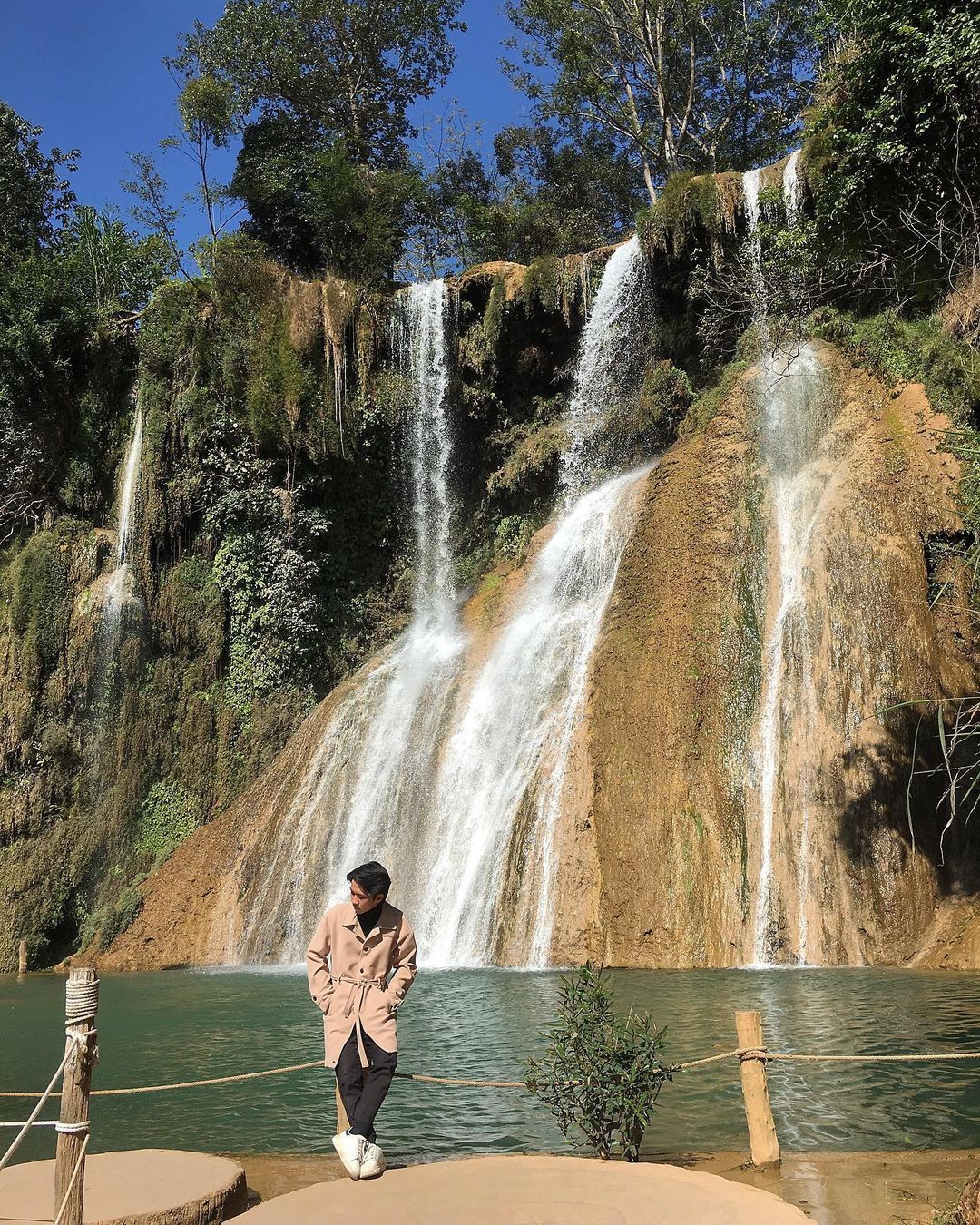 Dai Yem Waterfall is a symbol of the majestic yet romantic beauty of Moc Chau. Photo: @thanhd.ang

Dai Yem Waterfall is a symbol of the majestic yet romantic beauty of Moc Chau: at a height of 100m, the water rushes down and creates a lot of white foam. Dai Yem is divided into two sub-waterfalls which are about 200m apart. The first one has a width of 70m, an area of  about 4,000m2, and 9 floors like the "9 levels of love" as perceived by Vietnamese people. Meanwhile, the lower sub-waterfall has only 5 floors with an area of ​​about 3,000m2. The two branches of the waterfall are separated by a flat land which is very convenient for you to admire the beautiful scenery. 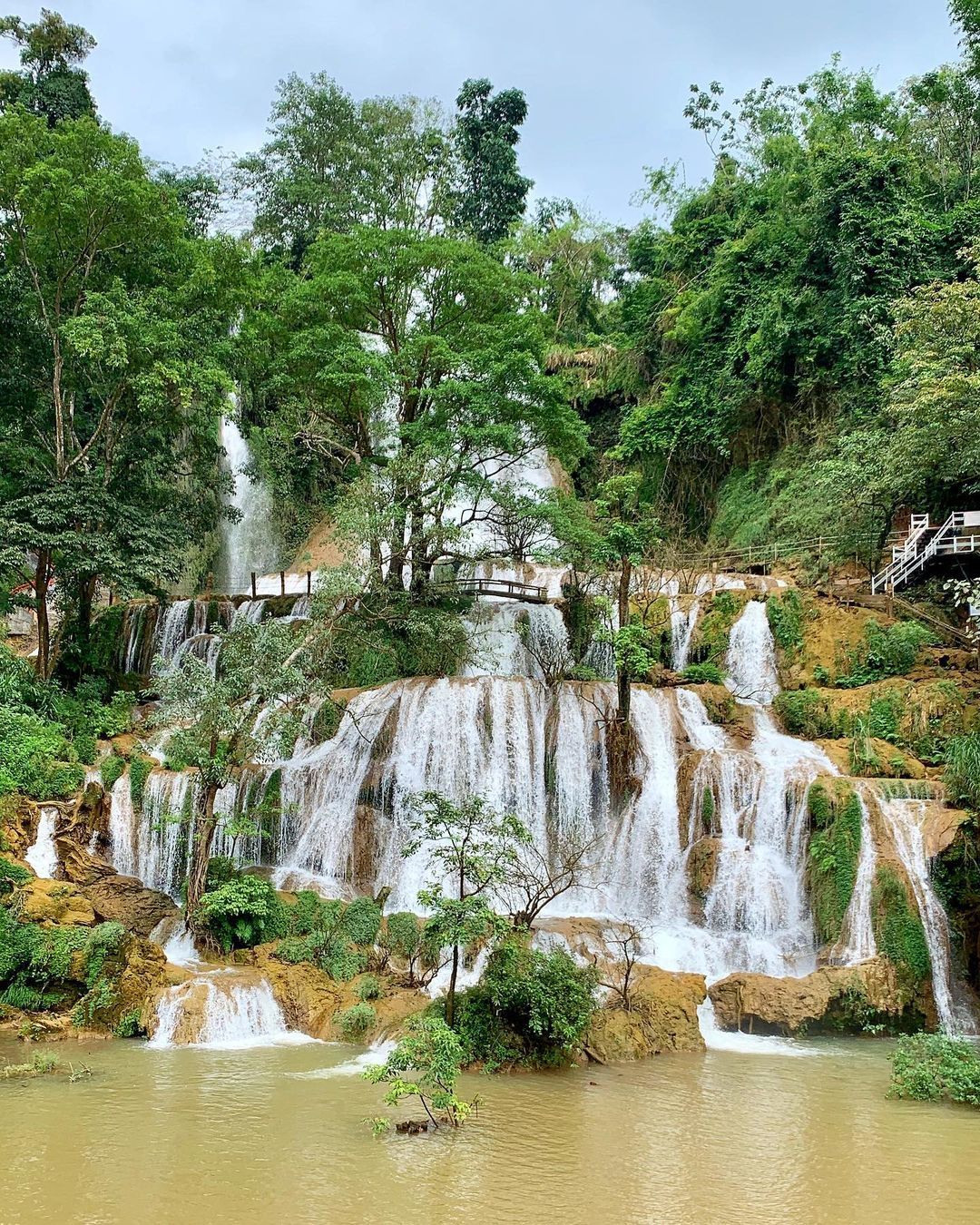 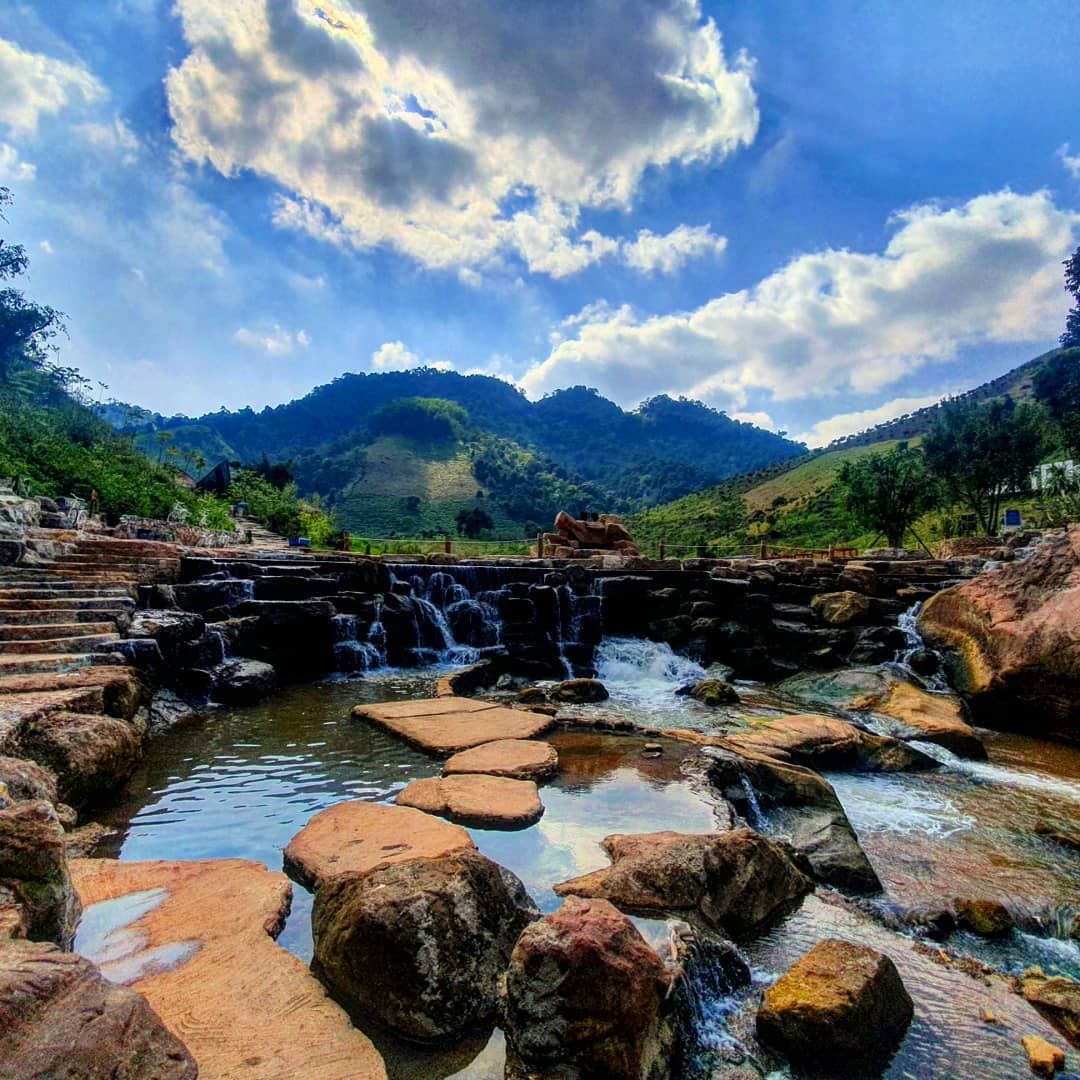 The foot of the waterfall is covered with many rocks. Photo: @nele_ana_aufreisen. 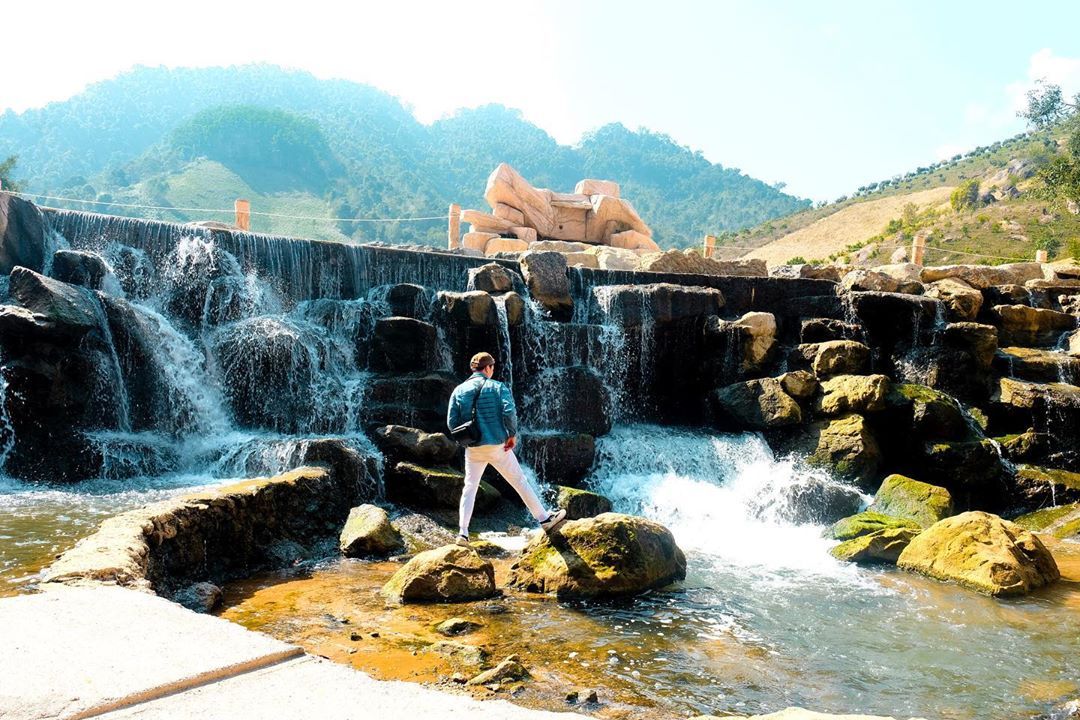 At the foot of the waterfall are countless undulating rocks along the stream bank. The green vegetation, large old trees, and vines growing in layers “blend into” the flow of water to create an attractive natural scene. Standing at the top of the waterfall, you can see the grandeur of the Northwest mountains with stretching forests. 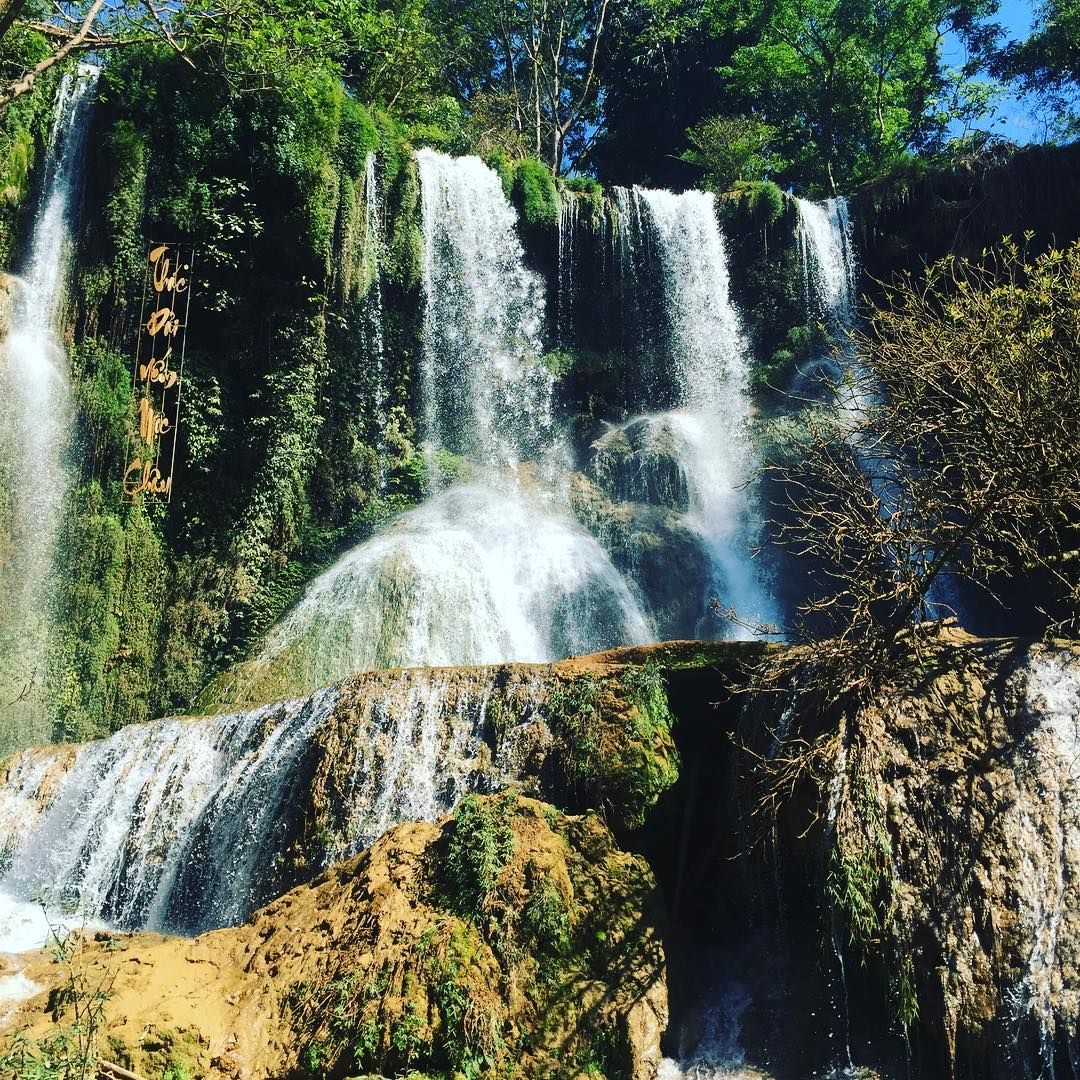 As the weather here is divided into two main seasons, namely the dry season and the rainy ones, the waterfall has two contrasting beauties in different seasons. In the rainy season (from April to October), all the water from the upstream rushes down, making the whole space covered with white foam - this is also the time when Dai Yem waterfall attracts the most visitors. Meanwhile, in the dry season, the waterfall flows down gently as threads, creating a romantic and poetic beauty.

The ticket price for visiting Dai Yem waterfall is VND 50,000. 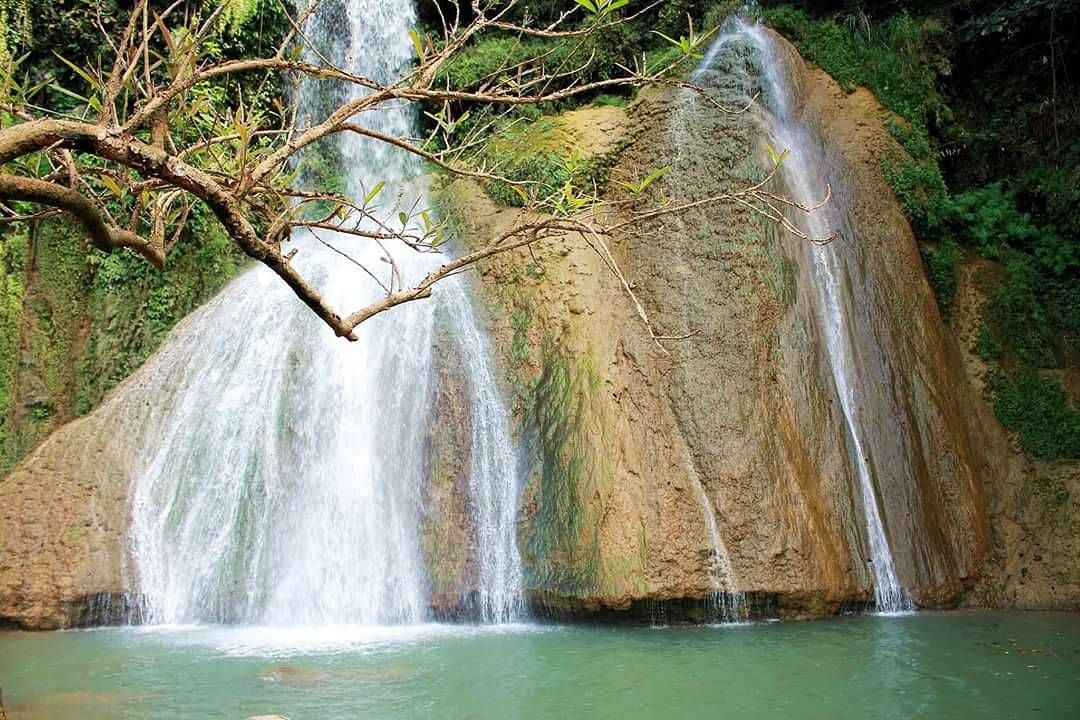 The waterfall in the rainy season. Photo: @beanie.vivi

In addition to visiting Dai Yem waterfall, you can travel a distance of about 11km to the pine forest of Ang village, which has a picturesque scenery where the wild space blends with fanciful clouds. Next to the pine forest is a relatively attractive strawberry garden, where you can visit and enjoy fresh and juicy strawberries, as well as take photos with some unique miniatures such as the bubble house, stairway to heaven, etc. 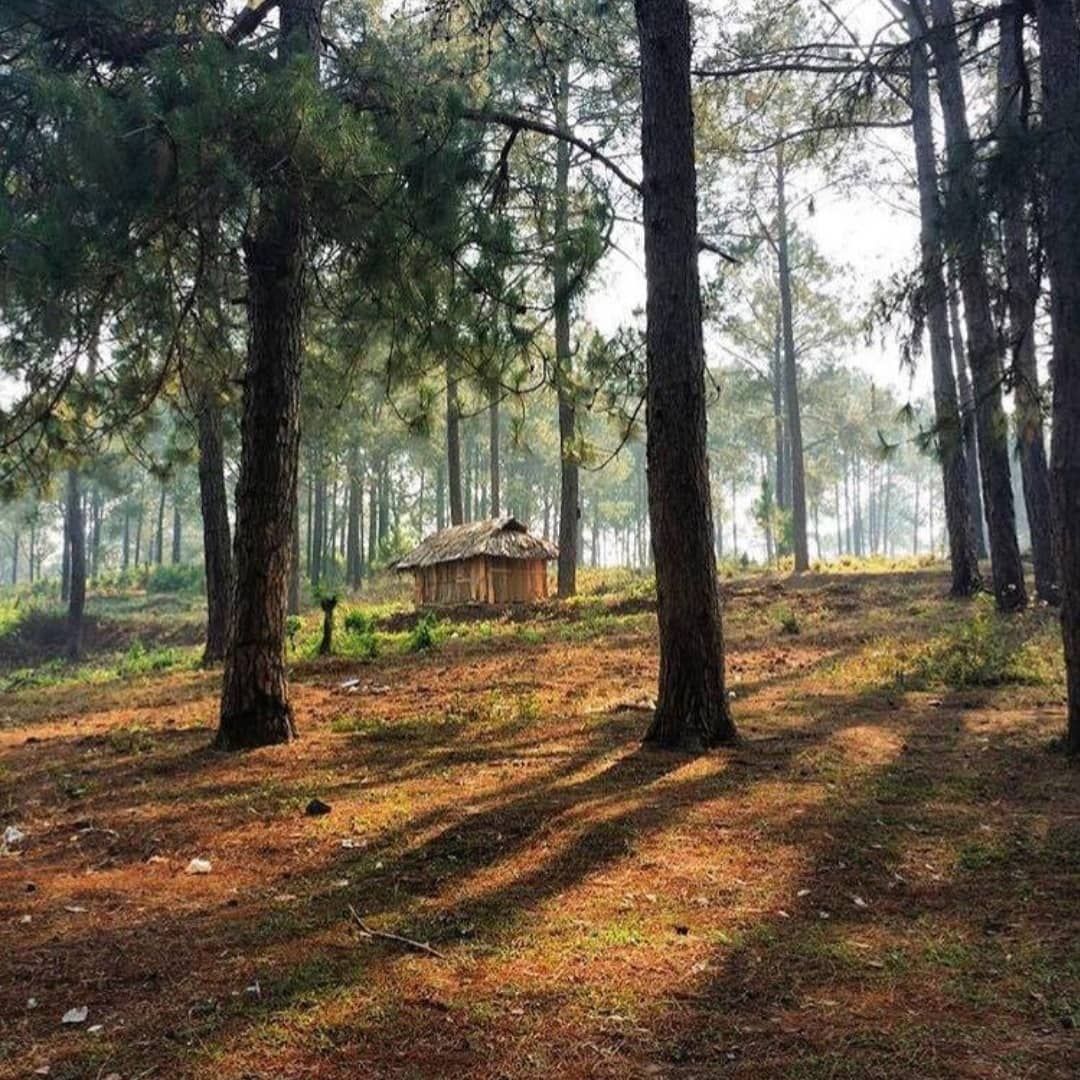 How to get to Dai Yem Waterfall?

From Hanoi to Moc Chau, you can choose to travel by coach with a ticket price ranging from VND 250,000 to 300,000/one-way ticket. The distance from the center of Moc Chau town to Dai Yem waterfall is about 8km, so you can rent a motorbike to easily get to other tourist attractions in Moc Chau with a cost of VND 150,000 - 250,000/day, depending on the type of vehicle.

You should obtain good driving skills to be able to handle difficult and winding roads. 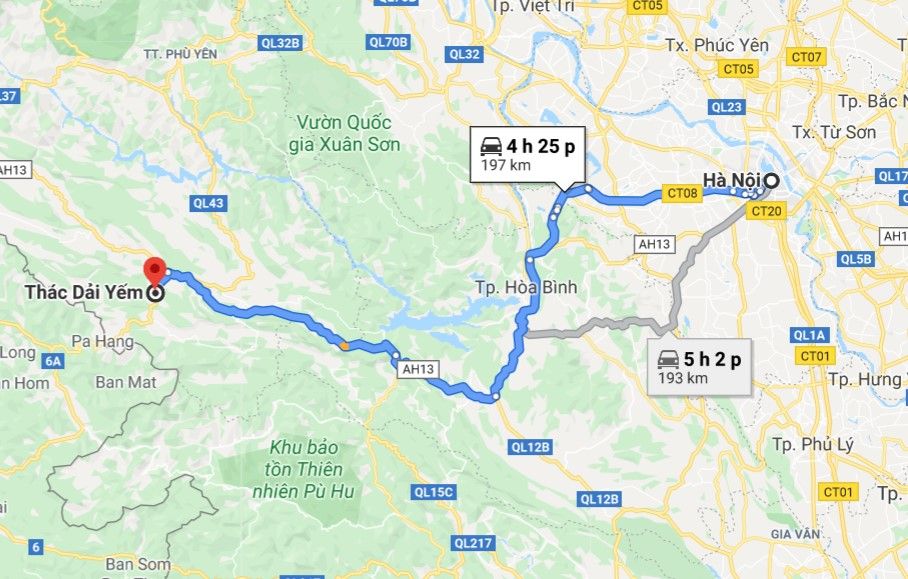 Directions from Hanoi to Dai Yem waterfall on Google Map.

After visiting Dai Yem waterfall, you can go back about 600m to Highway 43, then turn right and travel a distance of about 300m to the Vat village of the Thai ethnic group. 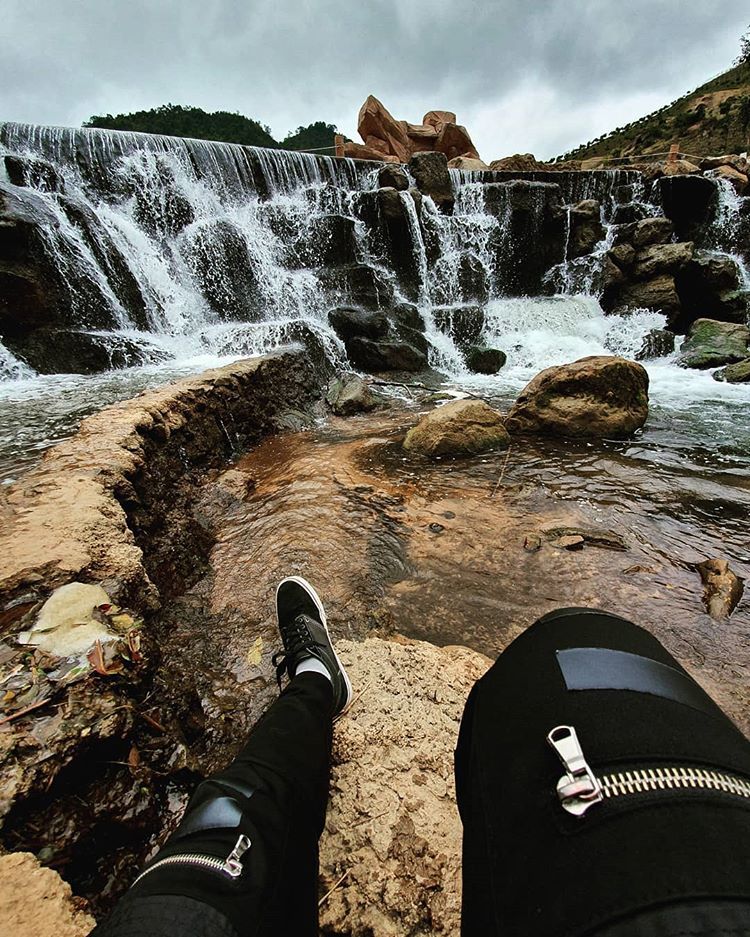 Dai Yem Waterfall is a special highlight of Moc Chau due to its majestic but dreamy beauty, which has attracted many tourists.