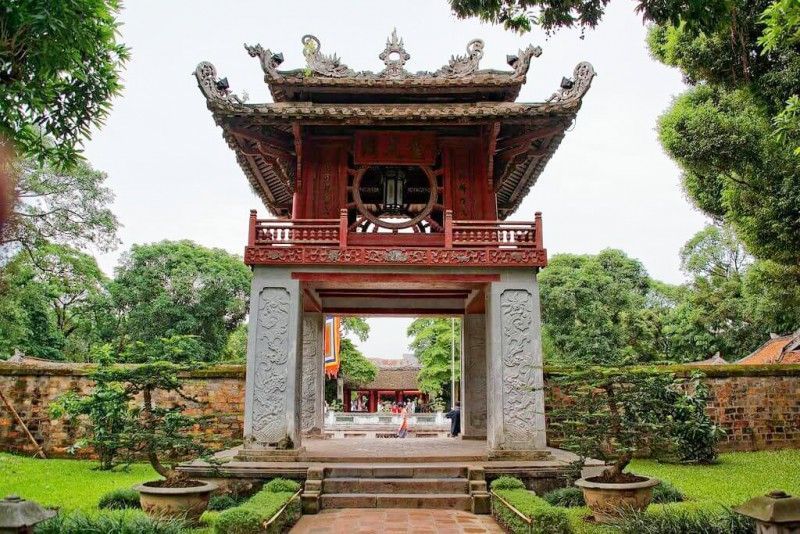 Ngoc Son Temple and Temple Of Literature are two historical and cultural relics which are of special significance to the capital of Hanoi. Coming to these places, you can admire the architectural works imbued with traditional Vietnamese values.

Ngoc Son is a famous temple in Hanoi, which is located on the Ngoc Island of Hoan Kiem Lake. Its original name was Ngoc Son pagoda, which was built in the 19th century. Later, it was changed into “Ngoc Son temple” as it only worships the god “Van Xuong De Quan” - who is worshipped by both folk and Taoists and governs the reputation and fortune of the scholars - and Tran Hung Dao, who is the hero defeating the Yuan army in the 13th century. 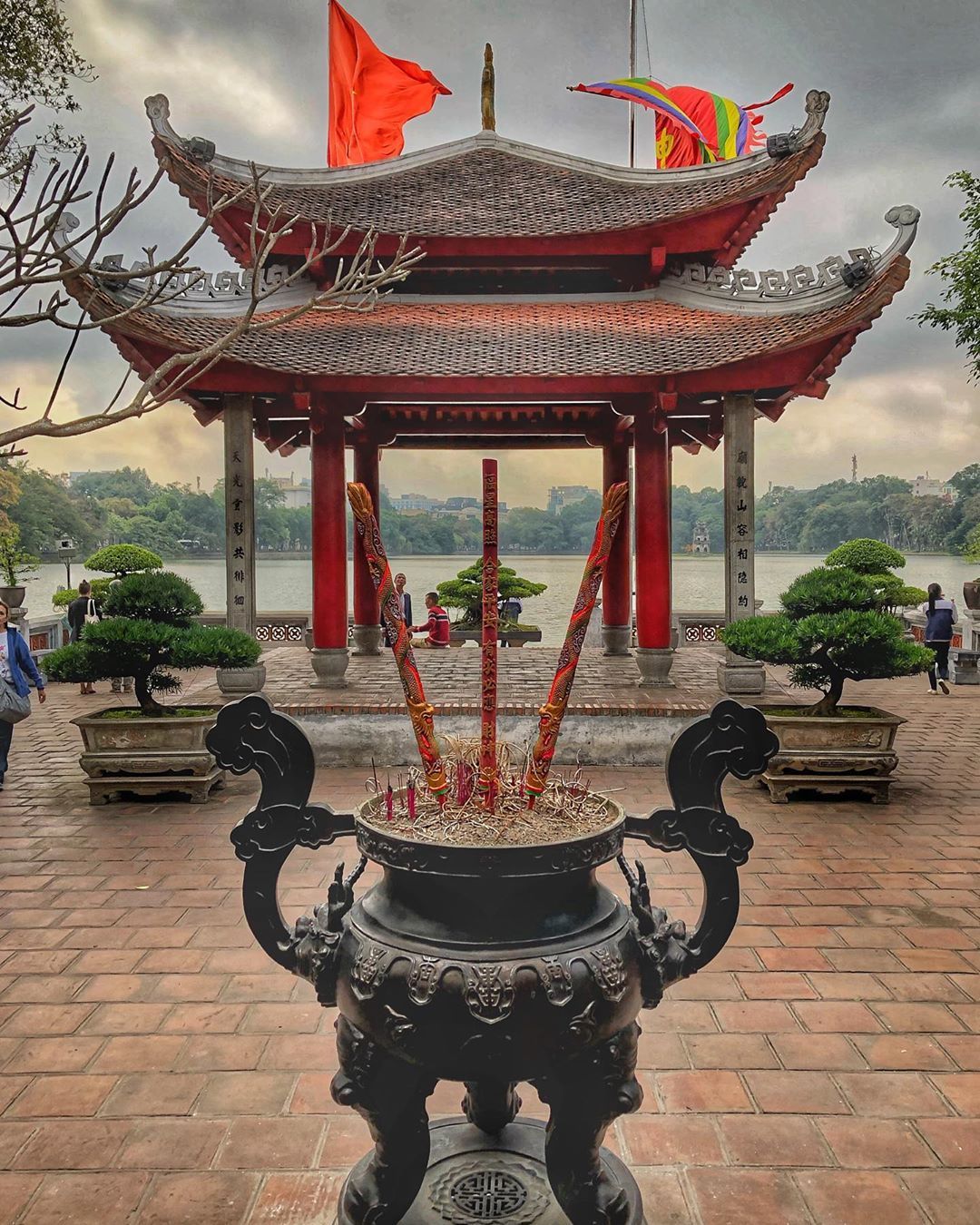 When relocating the capital from Hoa Lu to Thang Long, King Ly Thai To named the existing temple here Ngoc Tuong. In the Tran dynasty, it was renamed as Ngoc Son. The memoir "Temple of Ngoc Son De Quan" written in 1843 has a paragraph about Ngoc Son pagoda at that time: "...Ta Vong lake, formerly known as Hoan Kiem lake, was a scenic spot in the capital. To the north of the lake, a mound with an area of about 1000 - 1500 square meters, was said to be the fishing spot in the late Le dynasty. In the past, Mr. Tin Trai in Nhi Khe village expanded Quan De Temple there, and then called it Ngoc Son Pagoda...". After that, the pagoda was used to worship Tam Thanh (Three Gods). After the reconstruction of the main hall, the pagoda was renamed “Ngoc Son temple”. In the eighteenth year under the reign of Tu Duc (1865), the Confucianist Nguyen Van Sieu repaired the temple and built Tran Ba ​​Communal Hall, together with a bridge from the East bank of the lake to the island (The Huc Bridge). 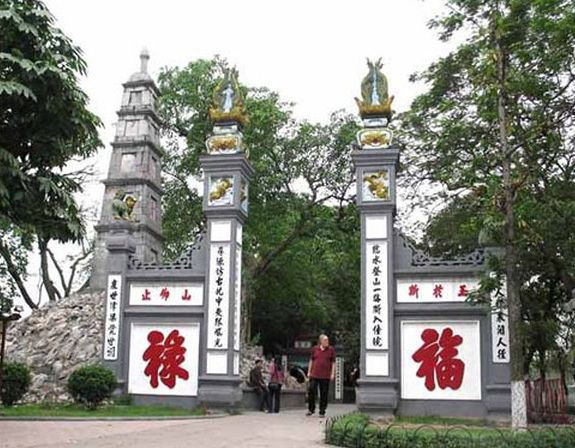 The Pen Tower next to the entrance to Ngoc Son temple. Photo: anninhthudo

Right from the entrance to Ngoc Son temple, you will be impressed with the image of Pen Tower. The tower was built in 1865 based on the idea of the Confucianist Nguyen Van Sieu. On the tower is engraved three words "Ta Thanh Thien", which means "Writing in the Blue Sky". To enter the temple, you have to pass through the red The Huc bridge. The name of the bridge means "the place to welcome sunlight in the early morning" or "the condensation of halo". 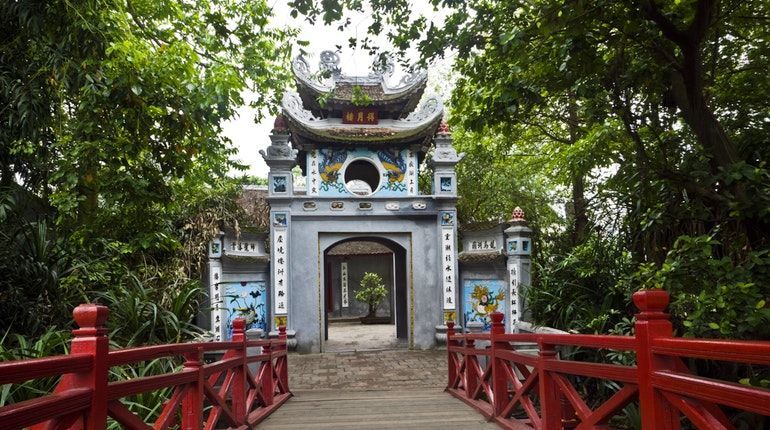 You have to cross The Huc bridge to get to Ngoc Son temple. Photo: ancu.me

At the gate of the temple, there is a Chinese inscription with a very meaningful philosophical meaning, such as: Ngoc U Tu (meaning: here is the pearl) or Son Nguong Chi (meaning: looking up at the mountain). The temple has a Tam-shaped architecture with many horizontal lacquered boards, parallels and sacred decorations. The two-storey square roof of Tran Ba Communal Hall in Ngoc Son temple has three parts with eight supporting pillars. The four outer pillars of the temple are made of stone, while the four inner ones are made of wood. This is the unique thing about the temple as the pillar system of a temple is often entirely made of wood. In the temple, there are two main halls to worship both the god “Van Xuong De Quan” - who is worshipped by both folk and Taoists and governs the reputation and fortune of the scholars - and Tran Hung Dao, who is the hero defeating the Yuan army in the 13th century. 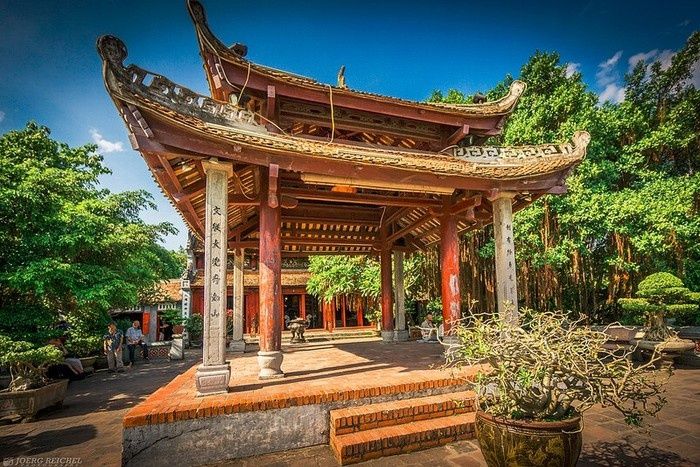 Tran Ba Communal Hall of Ngoc Son temple has a special architecture, with four outer pillars made of stone and four inner ones made of wood. Photo: mytour 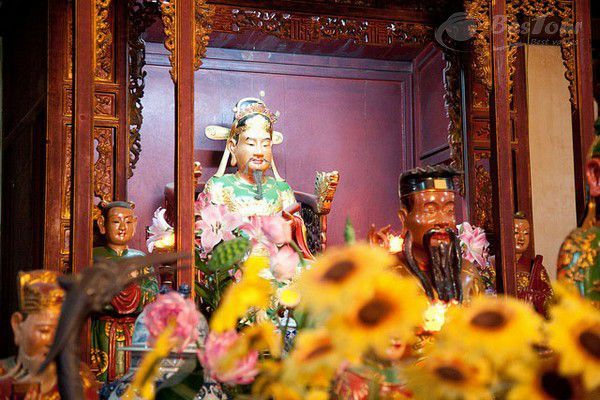 A specimen of a turtle was placed in the temple, which is believed to have been released by King Le Loi into Hoan Kiem Lake. Due to the relatively long life expectancy of the turtle (about 200 years old), Vietnamese people often call it respectfully by the name Mr. Turtle. The image of a big turtle in a glass cage makes tourists coming here surprised. 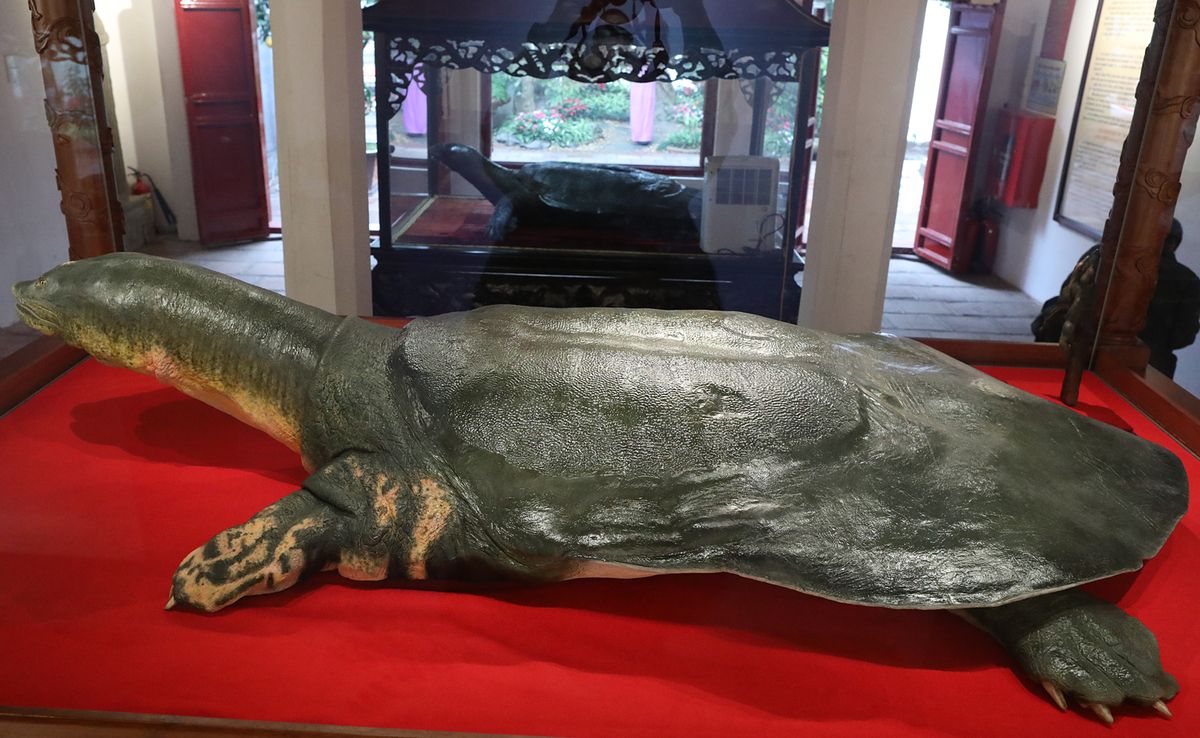 The specimen of the turtle in Hoan Kiem Lake is displayed in Ngoc Son temple. Photo: Vnexpress 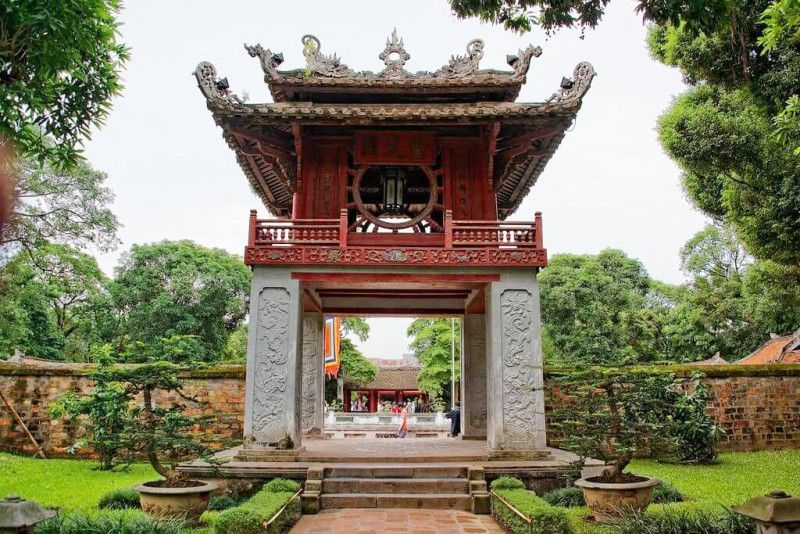 Originally, the Temple of Literature was used to worship the Duke of Zhou, Confucius, and his four disciples (Yan Hui, Zengzi, Mencius and Zisi). In 1076, King Ly Nhan Tong built Quoc Tu Giam - the first official school of Vietnam - behind the Temple of Literature. Initially, only princes, children of kings, royalty, nobles, and children of high officials (so it was called Quoc Tu, which means “children of the superior”) were permitted to study here. In 1806, Quoc Tu Giam organized the second exam to select high-score passers to enter the Han Lam Vien. Mac Hien Tich was the person with the highest score in that exam and was appointed the First Han Lam Scholar. 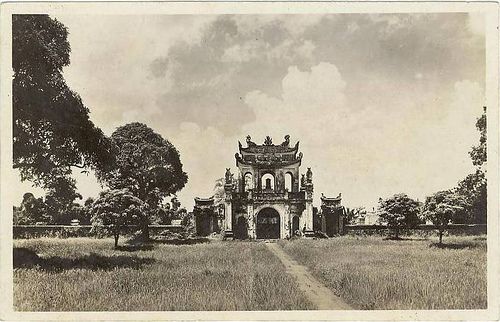 During the reign of King Ly Anh Tong, due to the reform of education, the Temple of Literature only worshipped Confucius. During the Tran Dynasty, the first Confucian Faculty was opened in 1232. That is why Quoc Tu Giam was expanded and recruited all excellent students in the society, which led to its alternative name Quoc Hoc (National Education). During the Tran Nghe Tong Dynasty (1370-1372), the Confucianist Chu Van An, who worked in Quoc Tu Giam under Tran Minh Tong's reign (1314-1329) was the first Vietnamese to be worshipped at the Temple of Literature along with Confucius. Under the reign of King Le Thanh Tong (1460-1497), as education developed the most, the king had stelea engraved in honor of the doctors and placed them in the Temple of Literature - Quoc Tu Giam. The first ten stelea were engraved in 1484 with the names of doctors in Nham Tuat exam under the third year of Dai Bao reign (1442) of the Le dynasty. 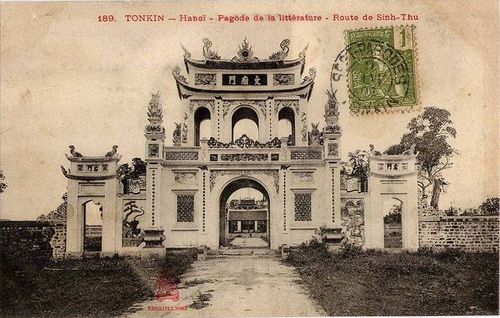 An image of the ancient Quoc Tu Giam. Photo: vitbeoxn.blogspot

During the Nguyen Dynasty, another Quoc Tu Giam school was established in Hue. In 1802, King Gia Long designated the work in Hanoi as the Temple of Literature for this region (instead of Vietnam). Thus, at the beginning of the Nguyen Dynasty, the Temple of Literature Thang Long (Hanoi) was regarded as a regional temple of Northern Vietnam with the new name “Hanoi Temple of Literature”. During this time, it was once repaired, and then the governor of Northern Vietnam Nguyen Van Thanh asked to build Khue Van Pavilion next to the Square Well. As for Quoc Tu Giam, it was changed into a school in the Hoai Duc area. In the campus, Khai Thanh temple was built to worship Confucius's parents.

Today, although the Temple of Literature is no longer a school, it is a destination for many tourists. At the same time, it is also both a place to commend students/individuals with excellent academic achievements and a familiar place for students to pray for luck before an exam.

In terms of architecture, Quoc Tu Giam is located in an area of 5,4331m2. Each work in the campus is arranged parallelly according to the North-South axis. Some works which can be listed are: The Gate of the Temple of Literature, Dai Trung Gate, Khue Van Pavilion, Dai Thanh Gate, the Shrine area, Thai Hoc Gate and Thai Hoc Area. 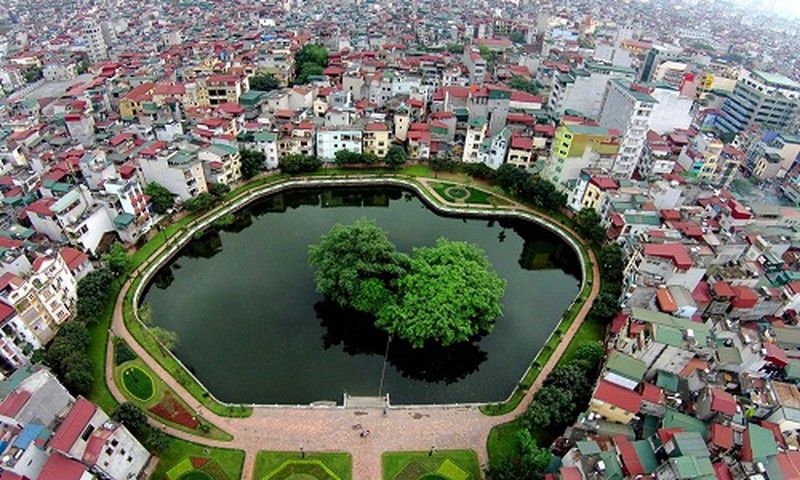 A panoramic view of Van Lake from above. Photo: kienthuc

In front of the Temple of Literature today, on the other side of the street, there is a large lake called Van/Minh Duong/or Giam. In the middle of the lake, there is a mound called Kim Chau, on which Phan Thuy Hall was constructed. This used to be the place for Confucian scholars to exchange their poems. At first, Phan Thuy was considered the Tieu Minh Duong (Small Hall) of the Temple of Literature - an important part of the entire architecture. 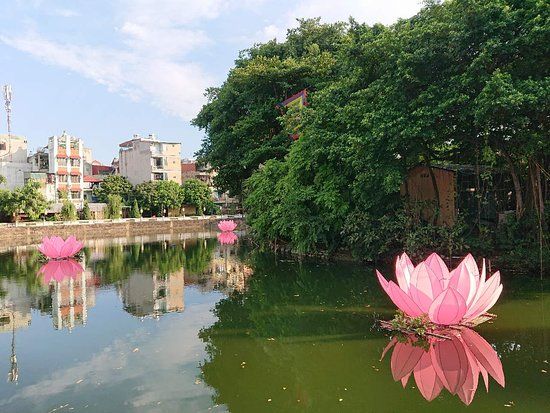 The Van Lake is open and airy with clear blue water. Photo: tripadvisor

In 1998, when renovating the lake, people found the Hoan Van stele from the 17th year of Bao Dai reign (1942), on which the description of Van Lake (composed by the scholar Hoang Huan Trung, who got the Bachelor’s Degree in the year of Quy Mao) was engraved. The back of the stele is engraved with a translation of the original Chinese version into the national language (at that time). On the stele, it says: "This lake is outside the third gate of the Temple of Literature, called Minh Duong or Van Lake. The lake covers an area of 10,900 square meters. There is a round mound called Kim Chau in the middle of the lake, covering an area of 200 square meters".

The scenery of Ho Van is airy with clear water, surrounded by a lot of trees. The small mound in the middle of the lake creates a highlight for this place.

The Gate of the Temple of Literature 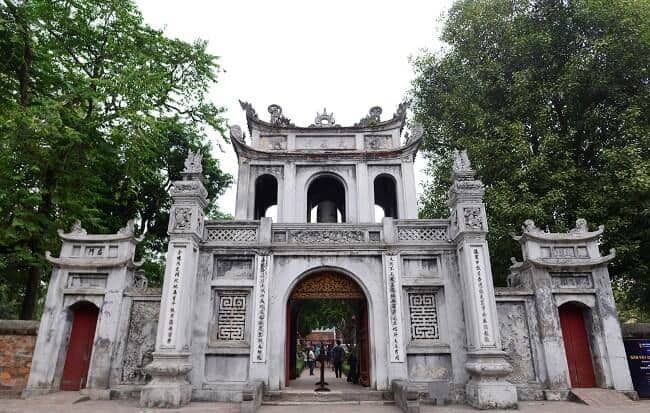 The Gate of the Temple of Literature. Photo: Vntrip 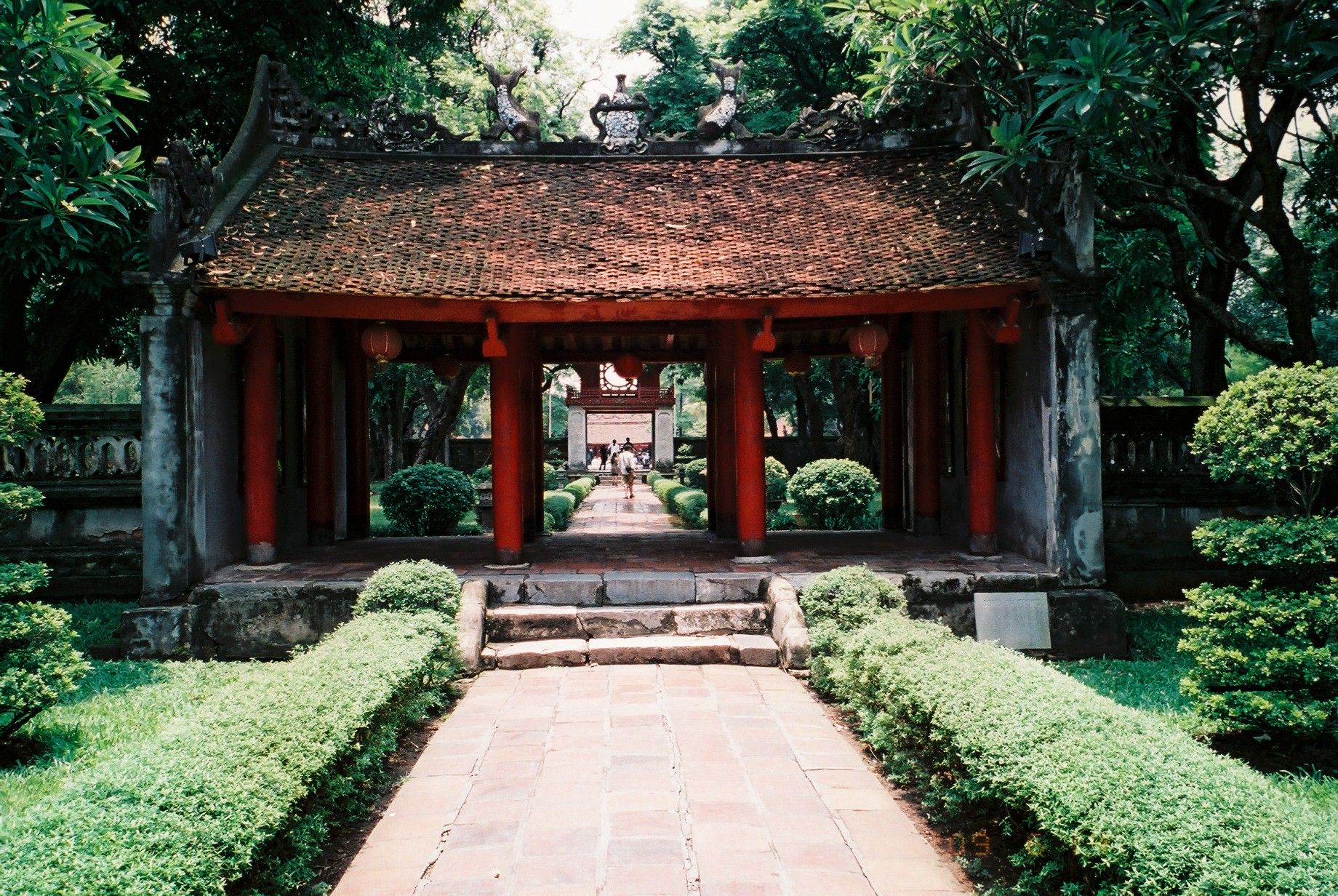 From the main gate of the Temple of Literature, the first area is called the Nhap Dao area. Following the path, you will see the second gate, which is Dai Trung. The gate is composed of three compartments, built on a high foundation (made of bricks), roofed with tiles. There are three rows of pillars (front - middle - back) in the gate, which are all made of wood and painted red to create harmony with the red tile roof. This area is surrounded by a lot of trees, creating freshness and tranquility. 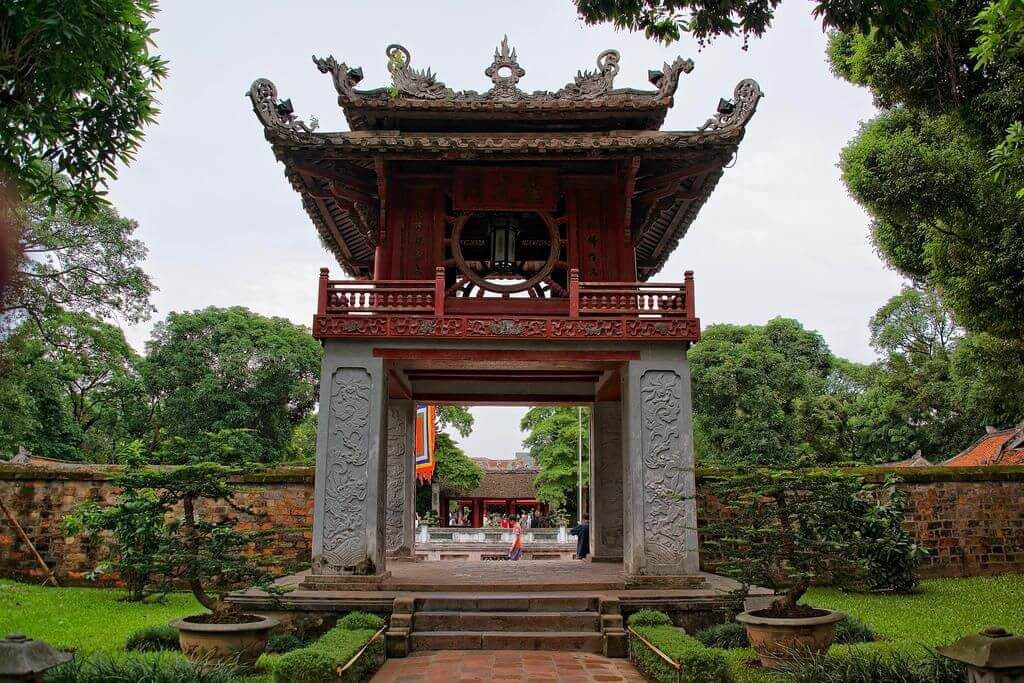 The road from the gate of the Temple of Literature to Dai Trung Gate leads to Khue Van Pavilion (meaning the Pavilion with the beauty of Venus). This square pavilion with 8 roofs, including four upper and four lower ones, was built in 1805 under the Nguyen Dynasty. The Khue Van Pavilion has two floors, of which the lower one has four square brick pillars carved with delicate patterns. Meanwhile, the upper floor is almost made of wood and illuminated, except for the roof and decorations at the corners. The architecture of Khue Van Pavilion is unique: it has four sides, but all of them are covered with wooden boards in the shape of the sparkling Venus. It is noted that all sides are engraved with a meaningful paralel in Chinese.

Khue Van Pavilion used to be a place for scholars to comment on the good essays of the students who passed the national exam. The pavilion is small with simple but elegant architecture, and among the lush green trees, Khue Van seems to be very poetic. 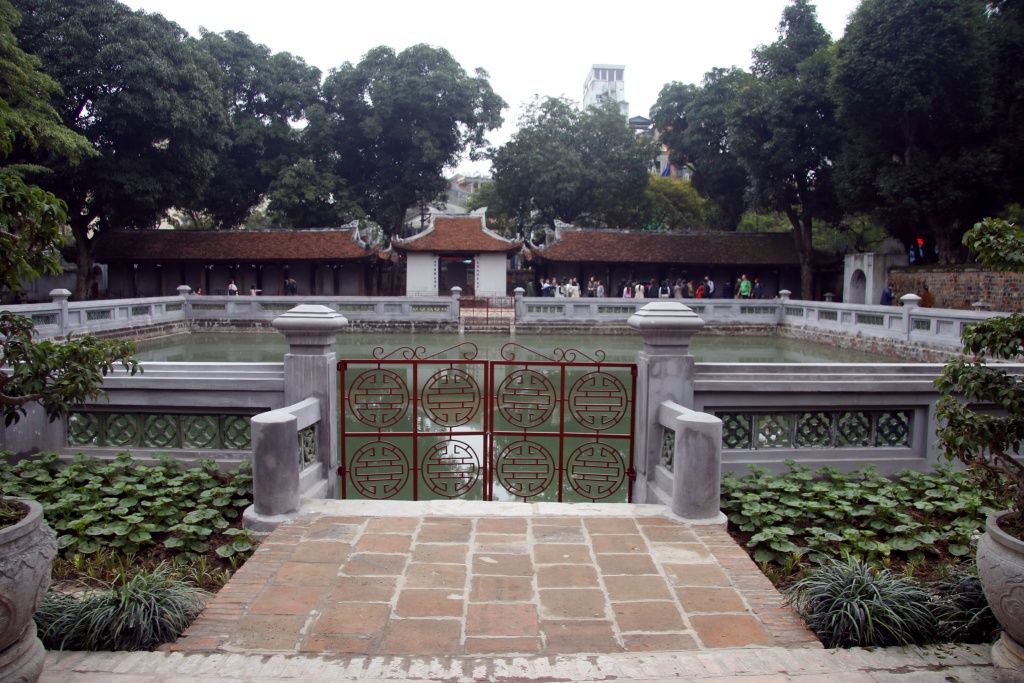 Thien Quang Well, which means "the well that reflects the sky", is also known as Van Tri. Its underlying meaning suggests that people get the essence of the universe, improve knowledge, boost their own values, and create a wonderful society. The well has a square shape, not as round as common wells. Around the well, there are railings which are as high as men’s hips. In the past, people perceived that the square well represented the earth, and the round gate of Khue Van Pavilion symbolized heaven. 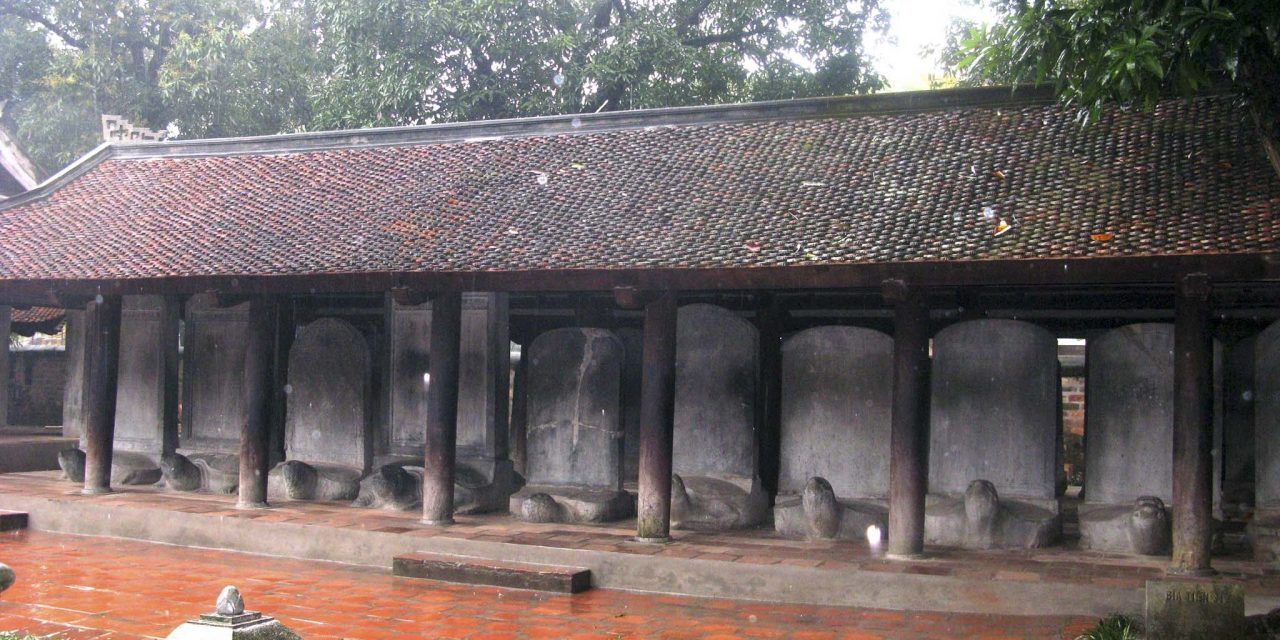 82 turtle-shaped Doctor Steles made from natural stone are erected on the right and left sides of Thien Quang Well. Photo: ditichkhanhhoa 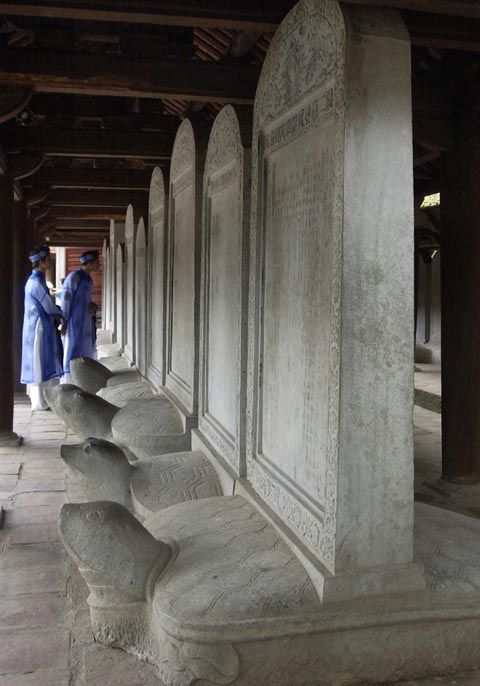 According to documents of the Ministry of Culture, Sports and Tourism: "The value and uniqueness of 82 stone stelea of the doctoral examinations of the Le - Mac dynasties (1442-1779) at the Temple of Literature (Quoc Tu Giam, Hanoi) lie in the inscriptions engraved on them. There are many countries in the world that have erected stelea, but only Doctor's stone tablets in the Temple of Literature have an inscription that records the history of examinations and the philosophy of different dynasties on education, training, and the use of talents.” 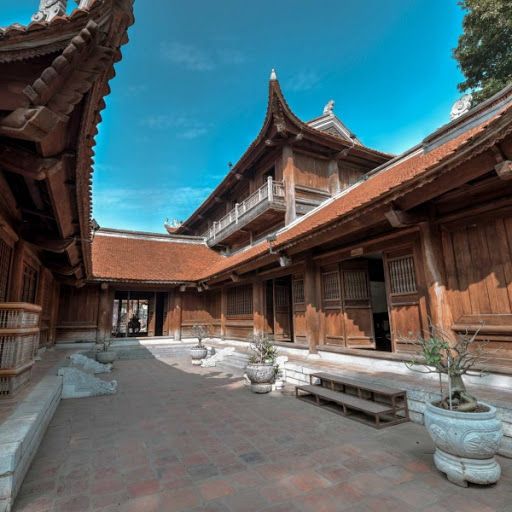 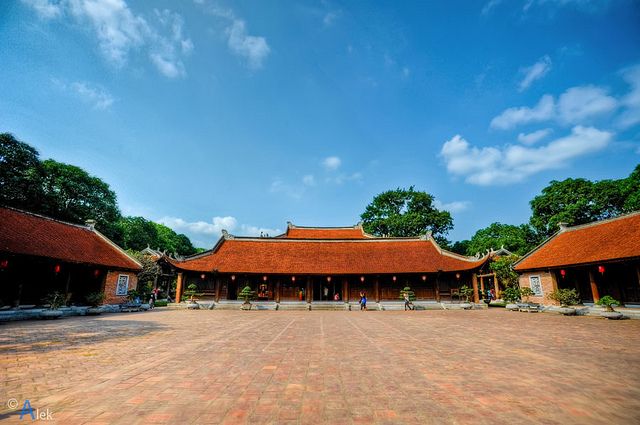 Quoc Tu Giam has a number of other works that you should not ignore, such as Dai Thanh Gate, the shrine area, Khai Thanh Temple, The Front Hall, The Back Hall, and Thai Hoc area.