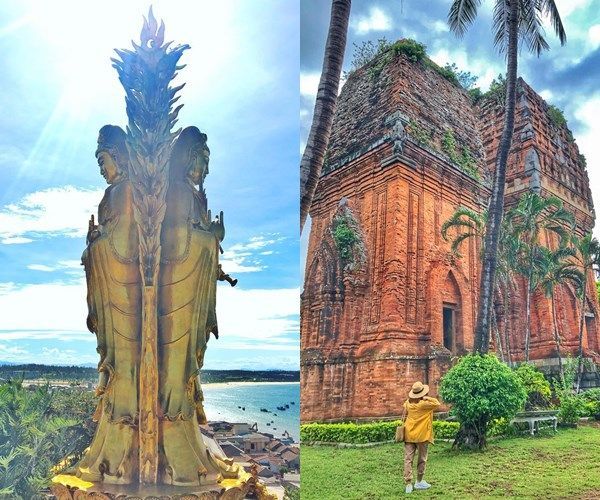 Binh Dinh is considered a destination with outstanding cultural and historical values of Vietnam. To acquire a better understanding of this land, you should not ignore these three places.

Hoang Hau Beach is located in the territory of Ghenh Rang - an interesting tourist attraction of Binh Dinh, which is about 3km southeast from Quy Nhon city. Hoang Hau beach is also known as Egg Beach due to countless eye-catching oval rocks shaped like eggs, which makes it different from common beaches. 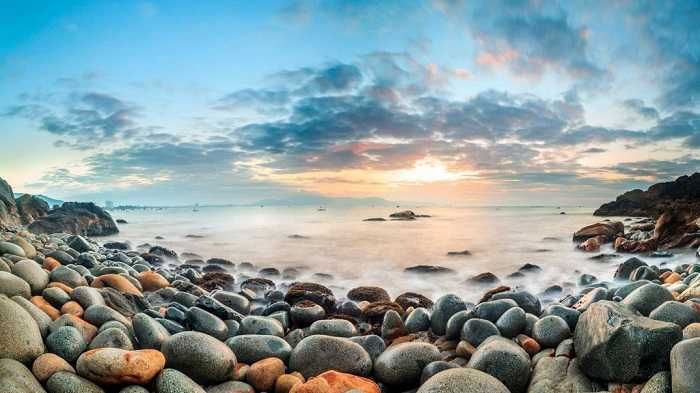 The beach is also known as Egg Beach due to countless eye-catching oval rocks shaped like eggs. Photo: yeudulich

Legend has it that, during the times when King Bao Dai went to visit central regions of Vietnam, Nam Phuong Queen chose this to be her private beach. That is the reason leading to the name Hoang Hau (Queen). 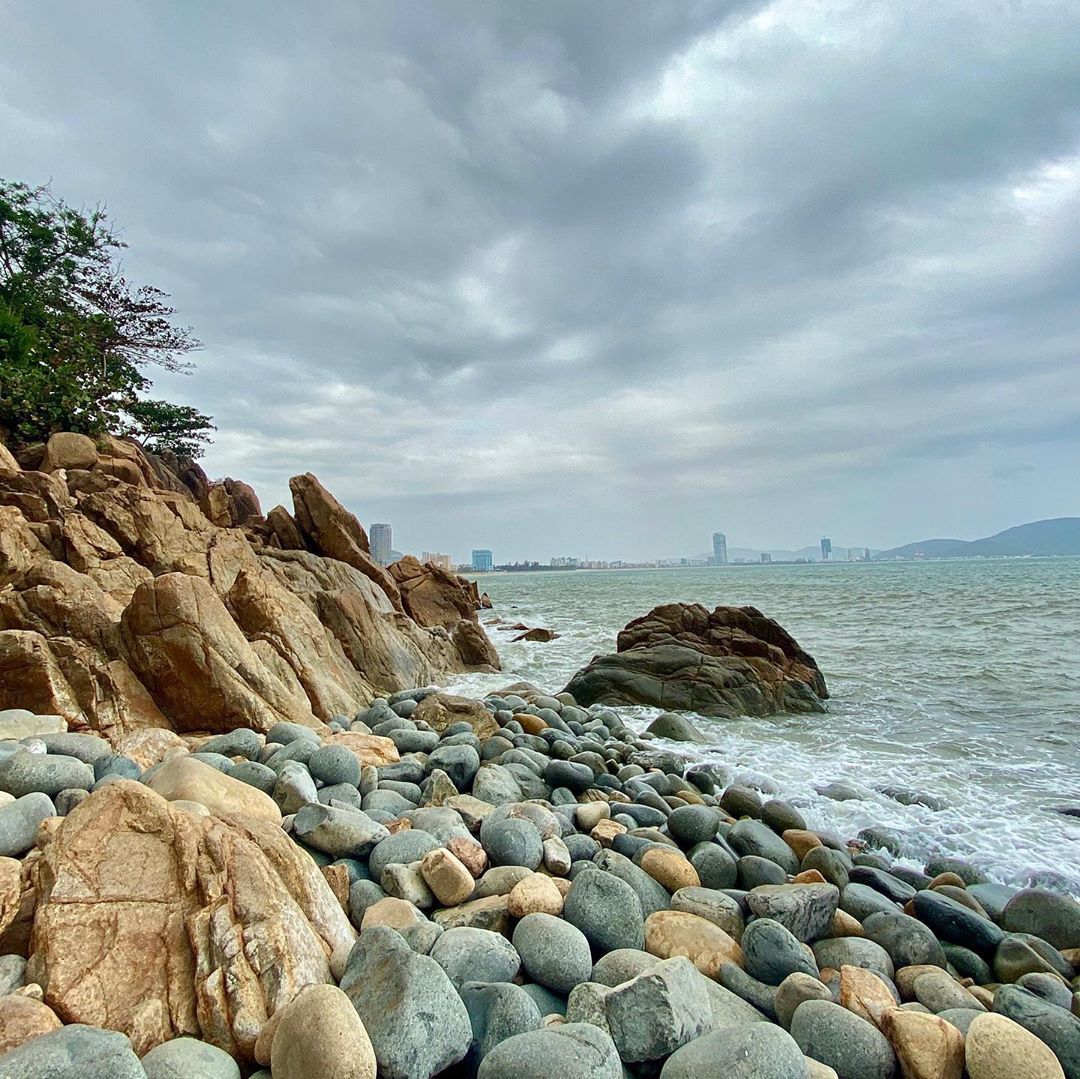 Hoang Hau Beach belongs to Ghenh Rang - the place associated with the sad love story of a couple. Photo: @nellafantasia39

There is another interesting legend associated with Ghenh Rang. According to folklore, once upon a time in this land, there was a beautiful girl who had a passionate love with a boy from the same village, however, their love was prevented by an official in the area. He exiled the boy to a remote area and forced the girl to give him 10kg of bird's nest in a month, otherwise she would have to marry him. Missing his lover, the boy escaped to find her and decided to go to the island to find bird’s nests on behalf of her. When the deadline was due, as the girl did not see her lover, she fled to Ghenh Rang and hid in Vung Chua mountain. At this time, there was a sudden storm and the mountain cracked a big gap. The girl ran into it and disappeared. When the storm was over, the ravine turned into a stream winding on the mountainside like a silk strip connecting heaven and earth, making people call it Fairy Stream. As for the boy, when he found enough bird’s nests, he immediately returned to the mainland, nonetheless, they were swept away by the waves as a result of the storm. He was exhausted, fainted and drifted into Ghenh Rang. When waking up, the boy suddenly saw the girl. He ran after her and called her name until both of them disappeared. Therefore, Ghenh Rang is regarded as the reuniting place for couples who could not get married in the living world. Instead, becoming fairies/fairy men is the only way for them to be together. That legendary story has led to the name “Tien Sa” (Fairy) for Ghenh Rang, so people often call this area by the compound name Ghenh Rang - Tien Sa. 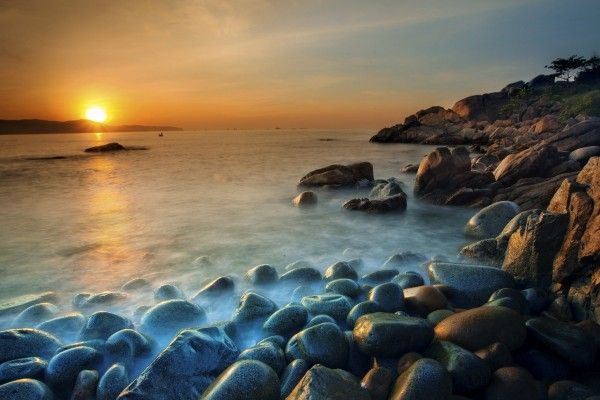 The beauty of Hoang Hau beach at dawn. Photo: @nhen99

Hoang Hau Beach is considered as one of the most beautiful beaches in Quy Nhon as it still retains pristine features. The round and smooth blue stones like giant bird eggs on the beach create a unique scene. In the early morning, the beach is gorgeous as sunlight sparkles over the sea. At sunset, hundreds of squid fishing boats shine brightly on the water like fireflies. For a period of more than 2 years, this place used to be abandoned, so the stones were fully covered with green moss, which was very attractive.

Twin Towers, also known as Hung Thanh Towers (SRI BANOI in J'rai language), is located in Dong Da ward, Quy Nhon tourist city. The campus is very large with an area of ​​about 6,000m2 adorned with green grass and rows of coconut trees. 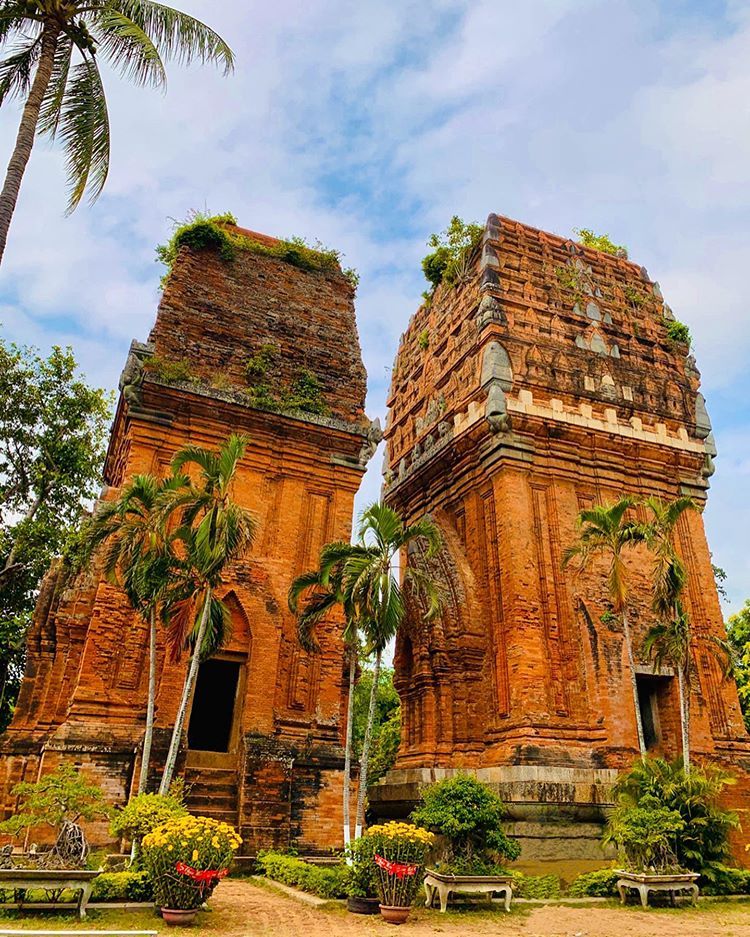 The Twin Towers features the artistic architecture of the ancient Champa people. Built around the 12th century, which was the period when there were frequent exchanges between Champa and the Khmer kingdom, the towers were influenced by Angkorian architectural sculpture. During the Vietnam War, the Twin Towers were heavily destroyed. In 1990, it was restored to an almost original shape. 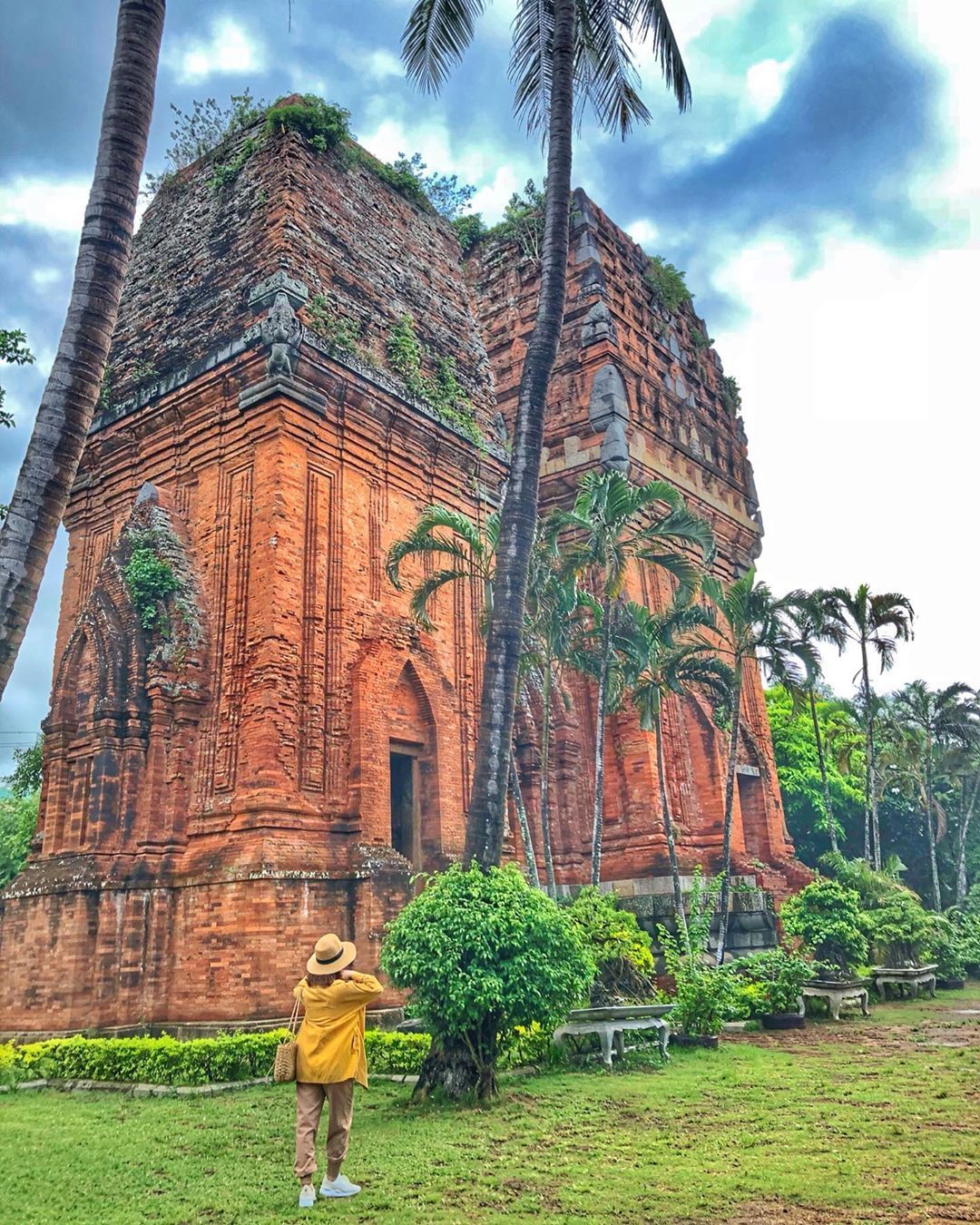 Traditionally, ancient clusters of towers usually have three towers, but Hung Thanh only has  two. According to experts, as there were some problems arising in the process of constructing the third tower, it was postponed. The towers are classified as a unique type of Champa architecture as they do not follow the rules of traditional multi-storey square towers.  Instead, the body of the towers is a square block with a curved roof, while the corners show the Garuda bird statues raising hands as if they are supporting the roofs. 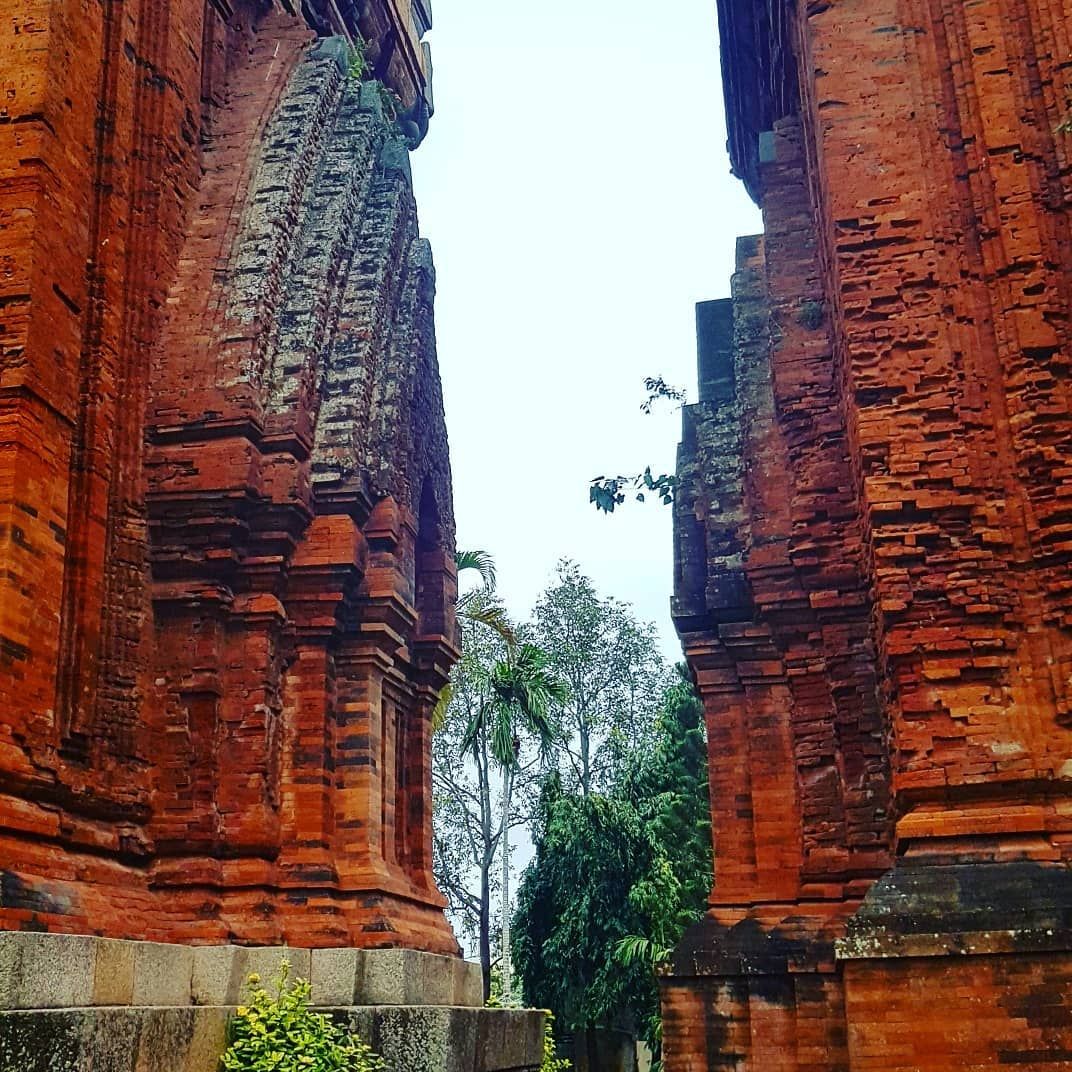 The Twin Towers were built of oven-baked bricks that were tightly packed together by a special adhesive. Photo: @anthonyamsterdam

The Twin Towers were built of oven-baked bricks that were tightly packed together by a special adhesive that researchers have not yet found. Of the two towers, the north one is 20m high and less damaged. The east door has been ruined for a long time; only a rectangular door frame made of four large stone bars remains. The south tower is 18m high, with the same architecture, shape and decoration as those of the North tower, but smaller in size. Both towers have now lost their spires. 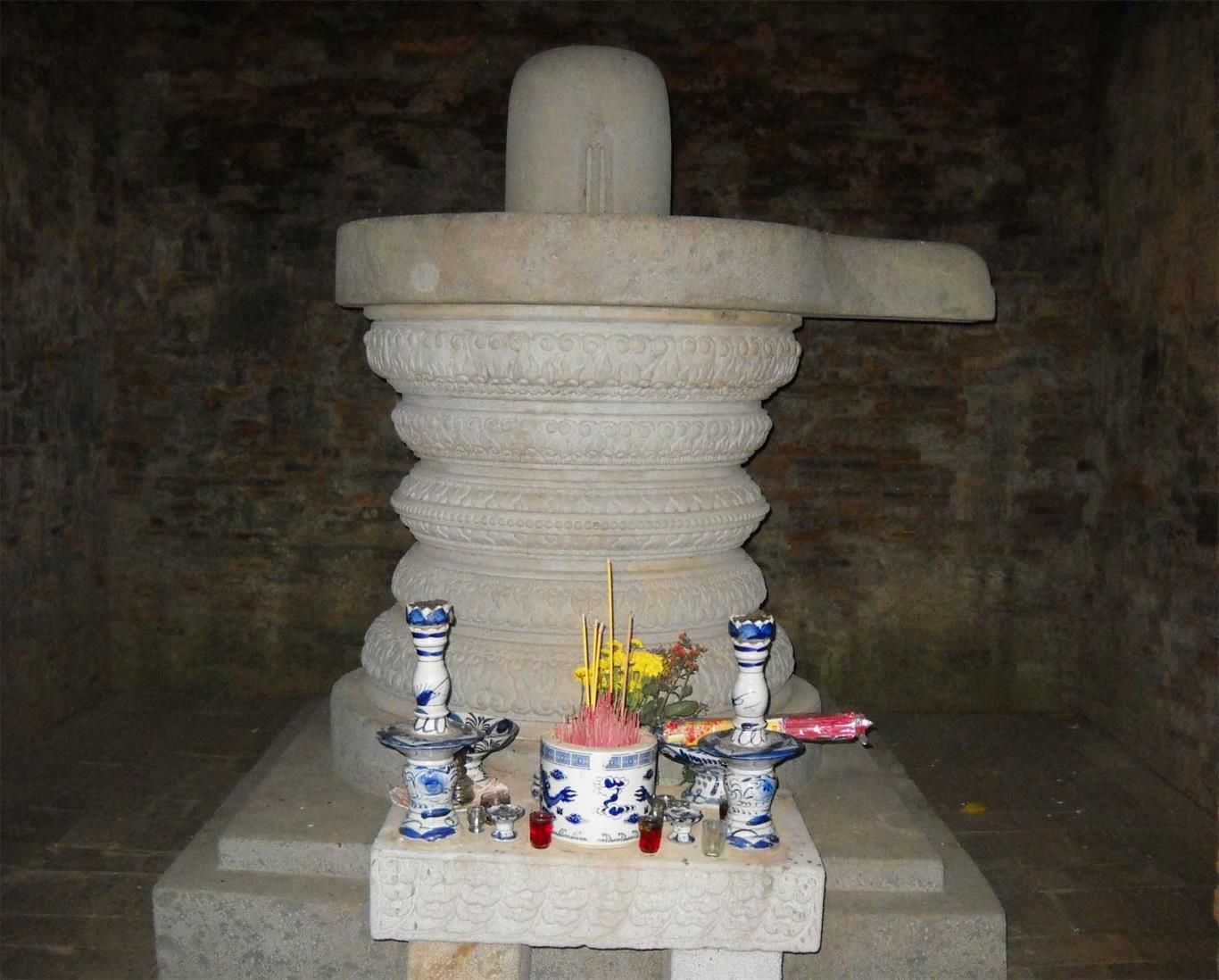 The Linga-Yoni statue made of sandstone in the Twin Towers. Photo: Vietravel

Inside the Twin Towers, there is a Linga-Yoni statue made of sandstone, which is a symbol of prosperity beliefs - the wish for the proliferation of agricultural people in general and of Cham people in particular.

Ngoc Hoa is a vihara located right under the mountainside of Eo Gio, Bai Bac, Phuong Mai peninsula, Ly Luong village, Nhon Ly commune - about 20km from Quy Nhon city center. The vihara was built in 1960 by Venerable Thich Giac An. Initially, it was built of light materials, but due to the location on the mountainside, it was rebuilt in the style of the Mendicant Sect. Currently, Venerable Thich Giac Tri is the abbot of the vihara. 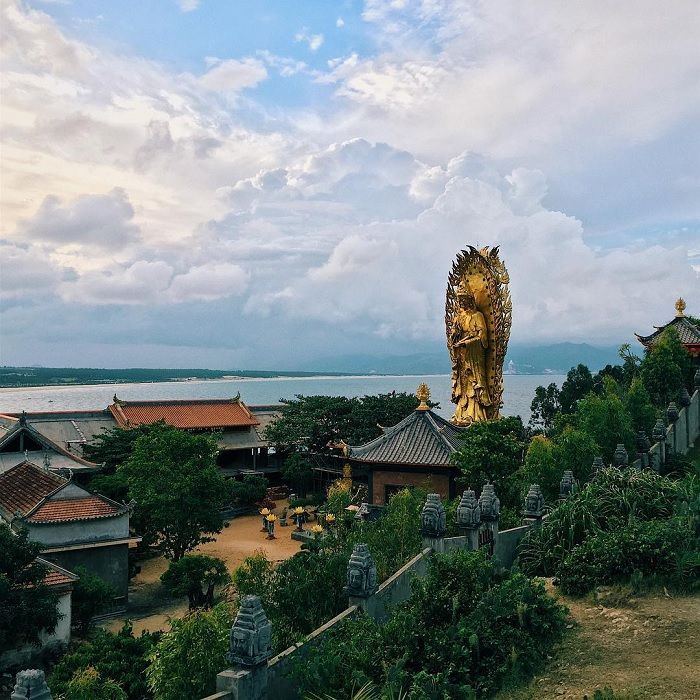 Ngoc Hoa Vihara is located on the mountainside of Eo Gio. Photo: @beepstagram

The reason for the name “vihara” instead of “pagoda” lies in the traditional beliefs. Buddhism originates from India, and Indians think that a pagoda is a place for praying and worshipping, while a vihara offers peace of mind - a place for those who want to live in seclusion and meditate. When coming to Ngoc Hoa Vihara, if you want to stay here for a few days, you can ask the abbot to do so. The vihara is free of charge - everything is at the discretion of the visitors. 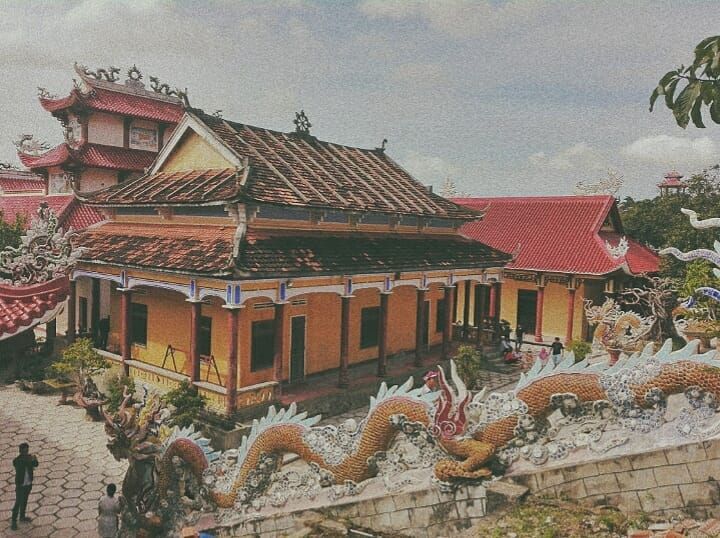 The main hall of the vihara. Photo: @hann_dao 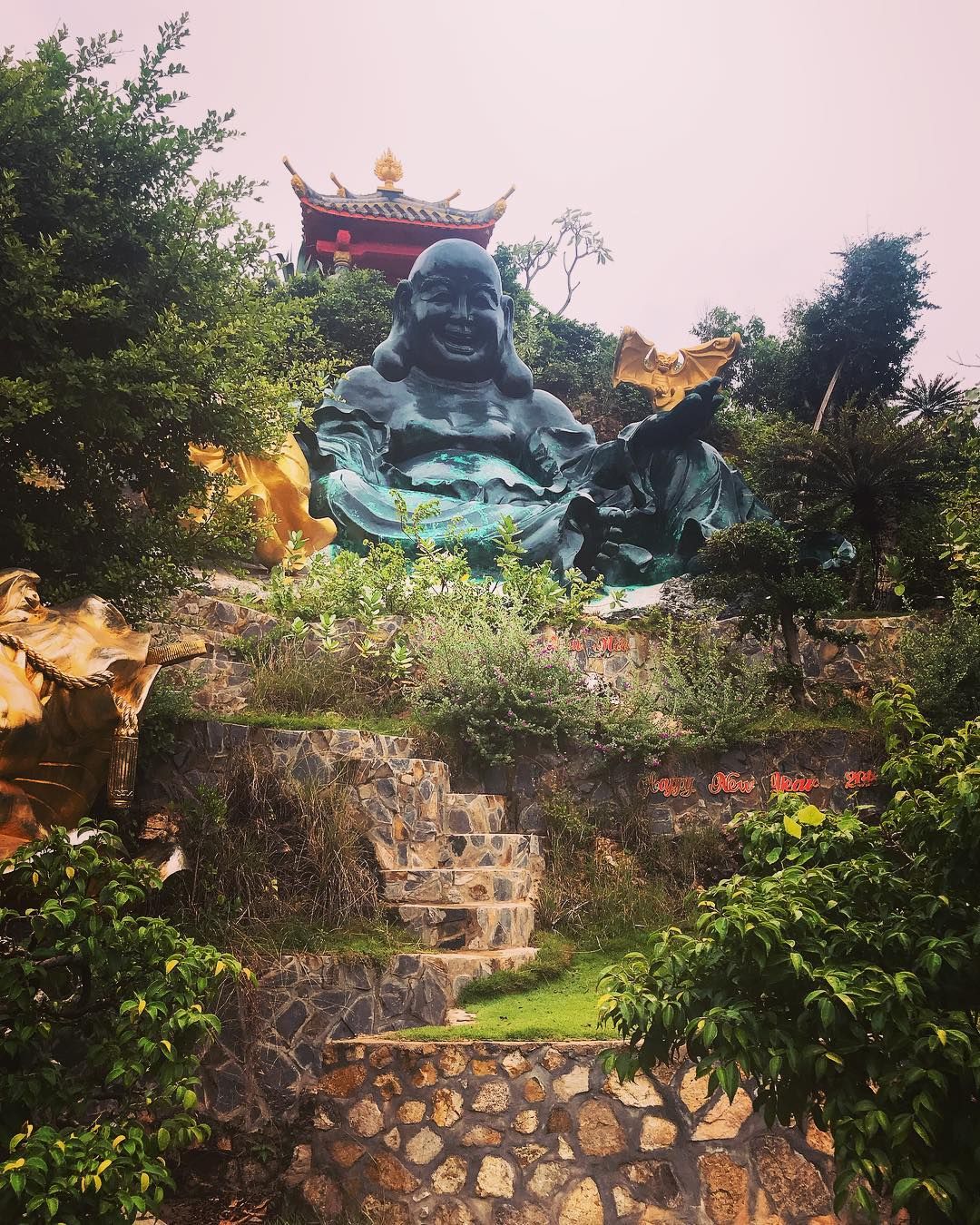 The campus is full of green trees. Photo: @tokkinguyen

Ngoc Hoa Vihara stands out with the main hall, which is the combination of both ancient and modern architecture like a key located in the North - South direction. The octagonal center is the place to worship the Three Jewels (Buddha - Dharma - Sangha), creating a sense of dignification and tranquility. In addition to many Buddha statues for visitors to worship, the campus has a lot of green trees, creating an airy landscape. 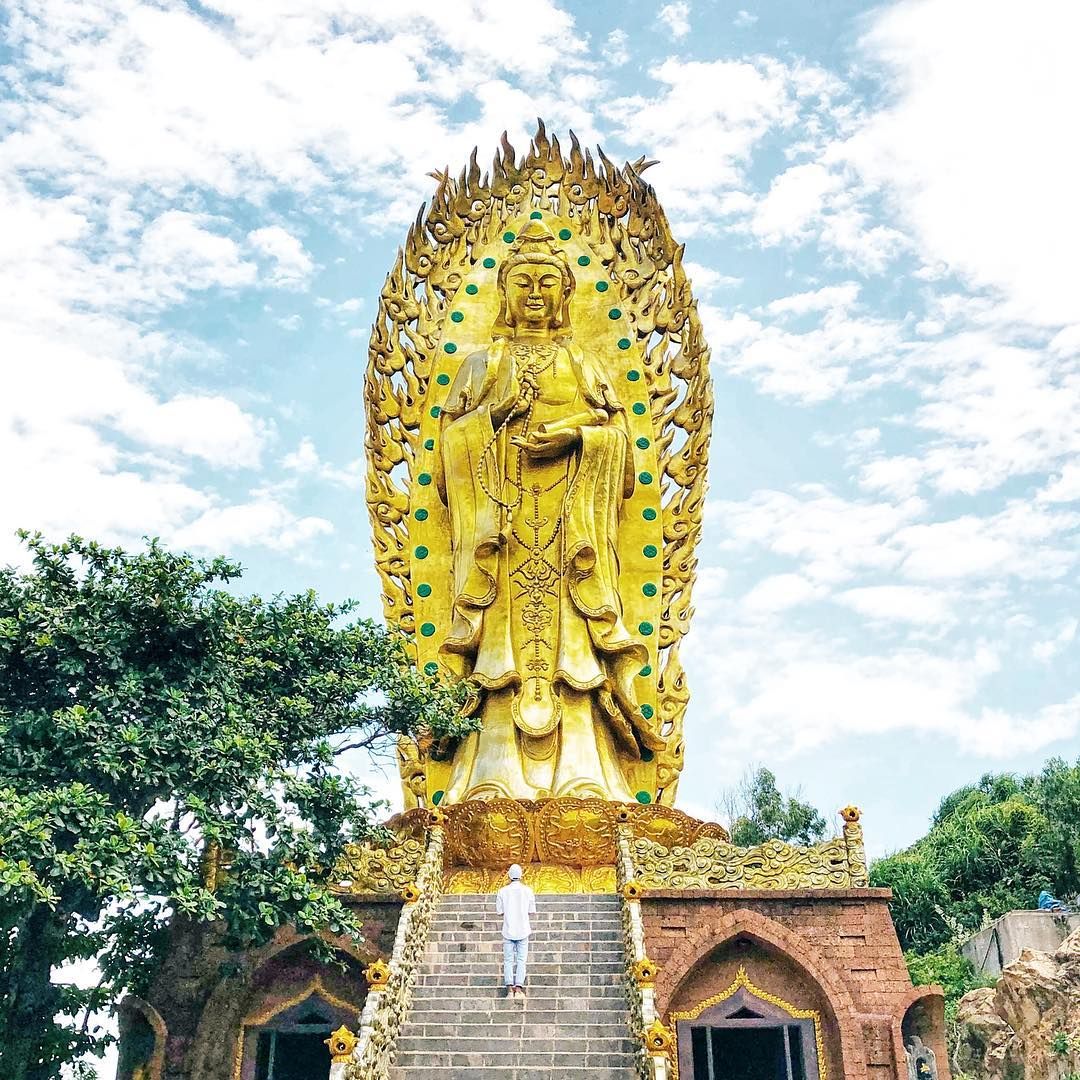 The most special feature of the vihara is the twin 30m-tall statue of Bodhisattva. Photo: @huynhlevophi

The most special feature of the vihara is the twin 30m-high statue of the Bodhisattva, which is considered the tallest twin statue in Vietnam today. One statue facing the main gate of the vihara in the south and holding rosaries and scriptures is called “Quan The Am Khiet Tuong”; while the other facing the north and holding a vase is called “Quan The Am Nam Hai”. Previously, the statue facing the north was painted in silver with the meaning of "silver sea" (in Vietnamese it symbolizes the abundant sea resources) to pray for prosperity and peace for fishermen; while the southern statue was painted in yellow with the meaning of "golden forest" (in Vietnamese it symbolizes the abundant forest resources) to pray for peace and prosperity for all sentient beings on the world. Later, due to the wishes of the people in the area, the twin statue was completely painted with gold emulsion paint to resist the wear and tear of time. 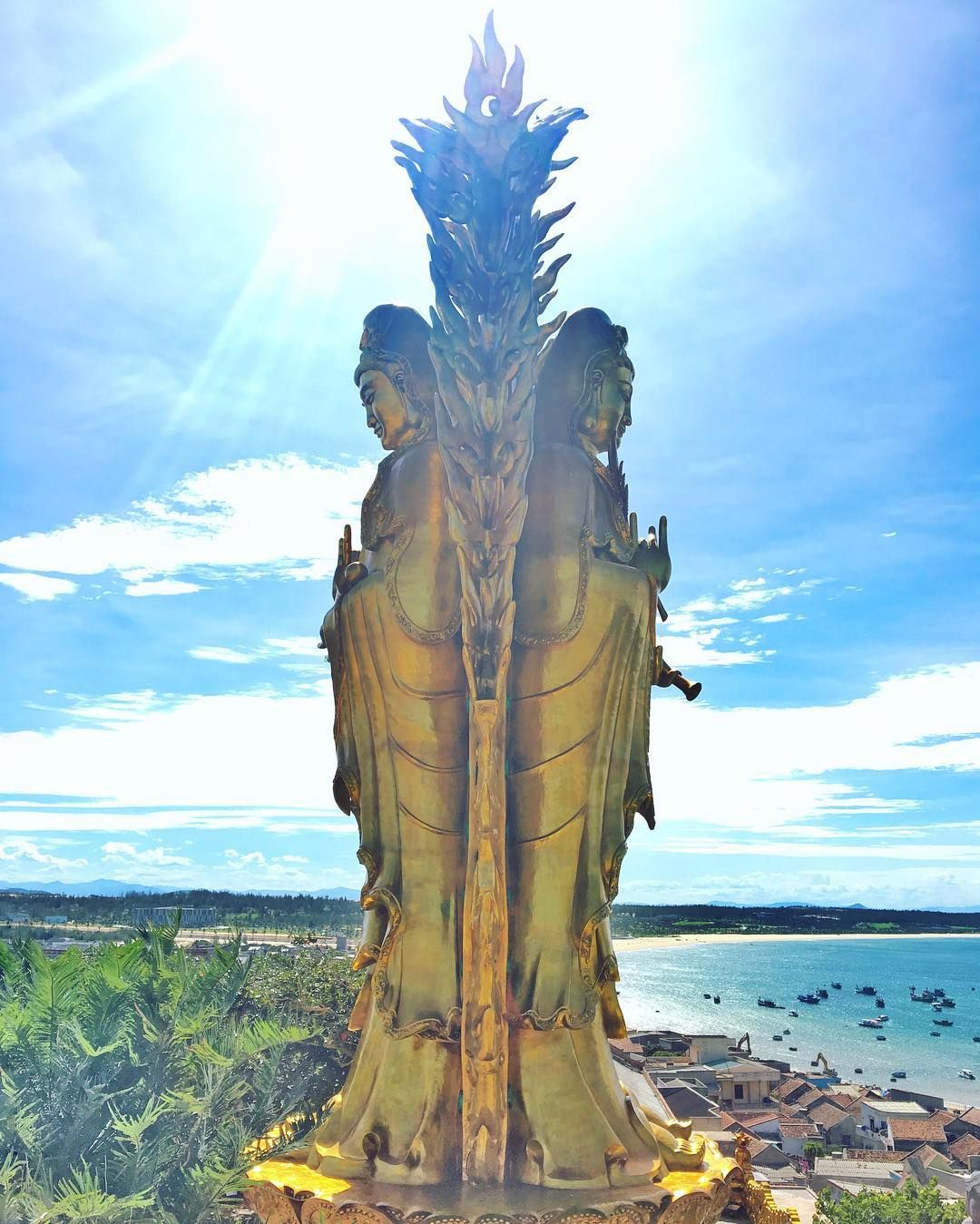 This twin statue also impresses visitors by its unique and sophisticated sculptural details. For example, the eyes are inspired from Tibet; the body features the typical figure of the Vietnamese; the shield in the middle shaped as the destructive fire of Shiva was learned from India, while the mural resembles the culture of Champa, etc. The body of the statue is hollow and placed inside about 2,000 small colorful Bodhisattva statues made from different materials such as stone, composite or bronze with full information about the concept and process of making it. 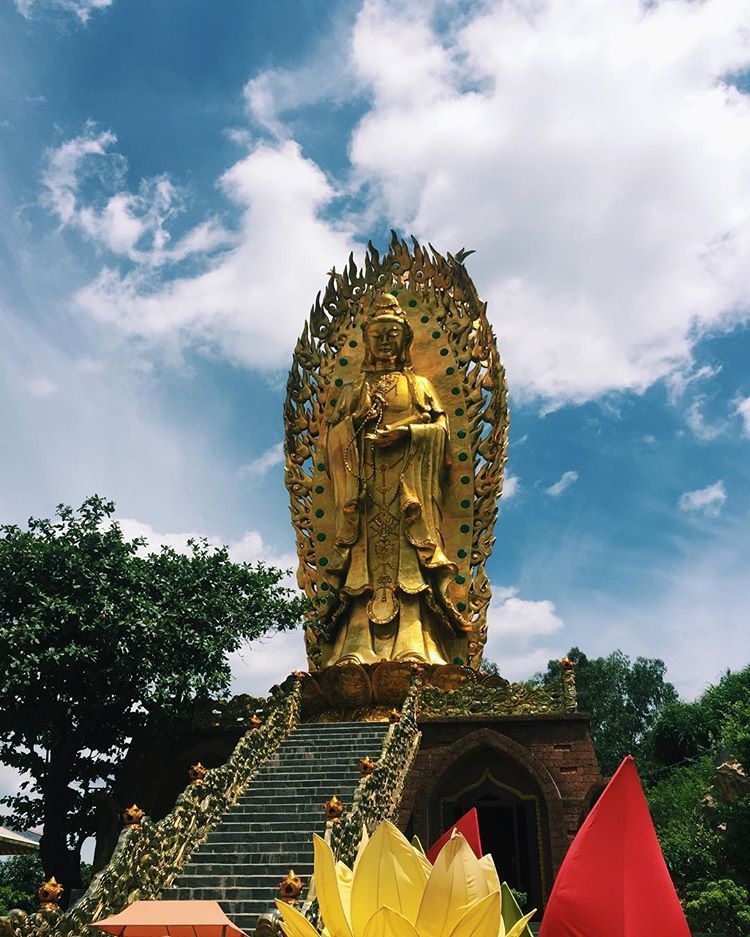 The statue is hollow with about 2,000 small Bodhisattva statues inside. Photo: @kit_179

Binh Dinh not only fascinates visitors with its wild, beautiful and poetic nature, but it also leaves a strong impression on the destinations featuring unique cultural and historical values. You should definitely visit the places above to somewhat understand this land of Vietnam.