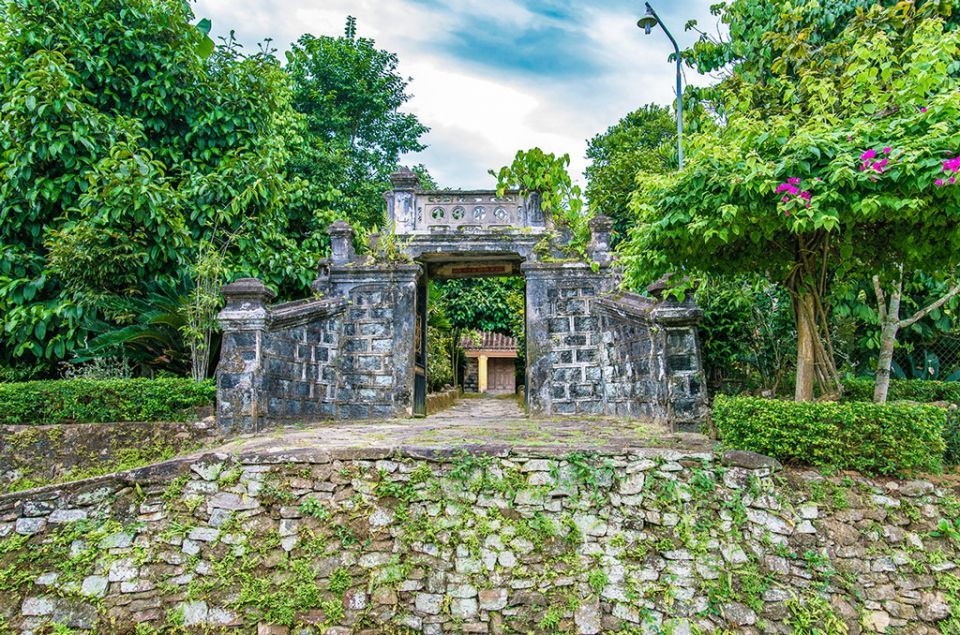 Loc Yen is one of four villages recognised as a national monument in the S-shaped country, which is likened to a miniature Vietnam with unique stone fences.

Vietnam has many ancient villages, but Loc Yen, which is located in Tien Phuoc district, Quang Nam province, is probably the only place with beautiful, poetic and peaceful scenery. According to the elders, this land was associated with the reclamation and village establishment around the 15th-16th centuries. In the Tay Son dynasty (1771-1802), the village was formed with the original name “Loc An” village. The pioneer of the village is Mr. Nguyen Cong Tuyet who was from Tan Phuoc village, Tam Ky city. After the initial reclamation, the village was renamed as “Loc Yen”, but in 1947, the name was changed to “Tien Loc”. Finally, in 1955, “Tien Loc” was rechanged to “Loc Yen” and this name has been kept until now. 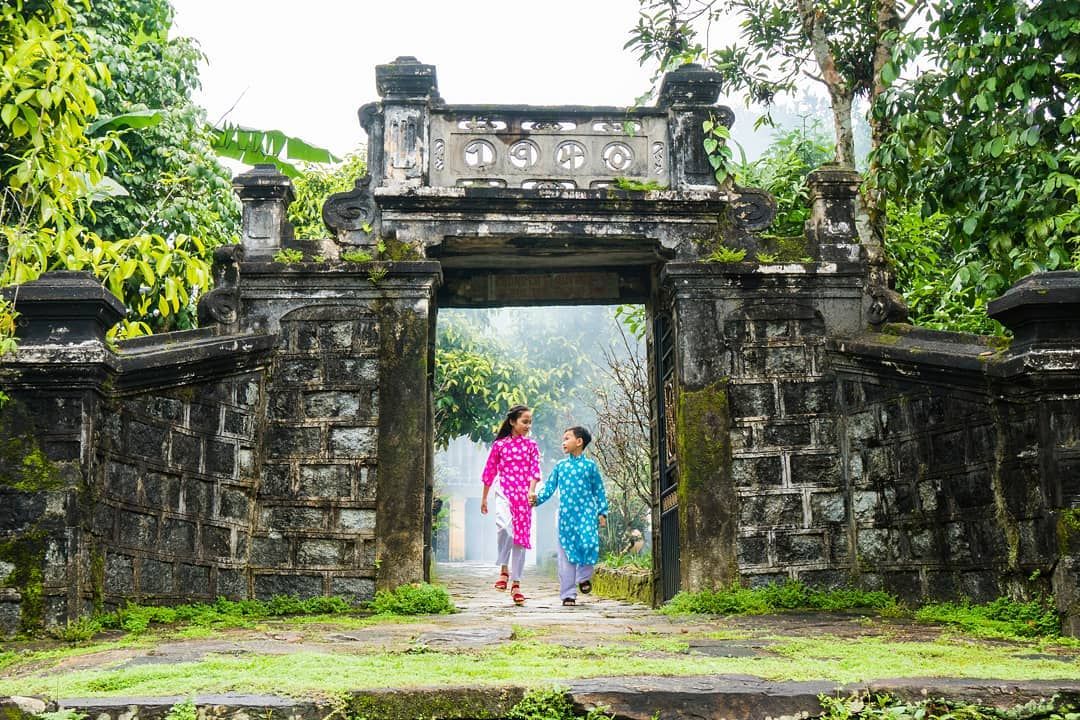 In September 2016, Loc Yen was recognised as one of the four ancient villages as a national monument.

Loc Yen village is like a miniature Vietnam since it has typical features of a traditional Vietnamese village with mountains, rivers, terraced fields and rows of coconut trees. The village is located in a beautiful valley and is surrounded by mountain ranges of Da Ban, Rung Gam and Ho Cho. At the foot of these mountains, there are rivers and streams of Vuc Dai and Da Giang, together with many small ditches. 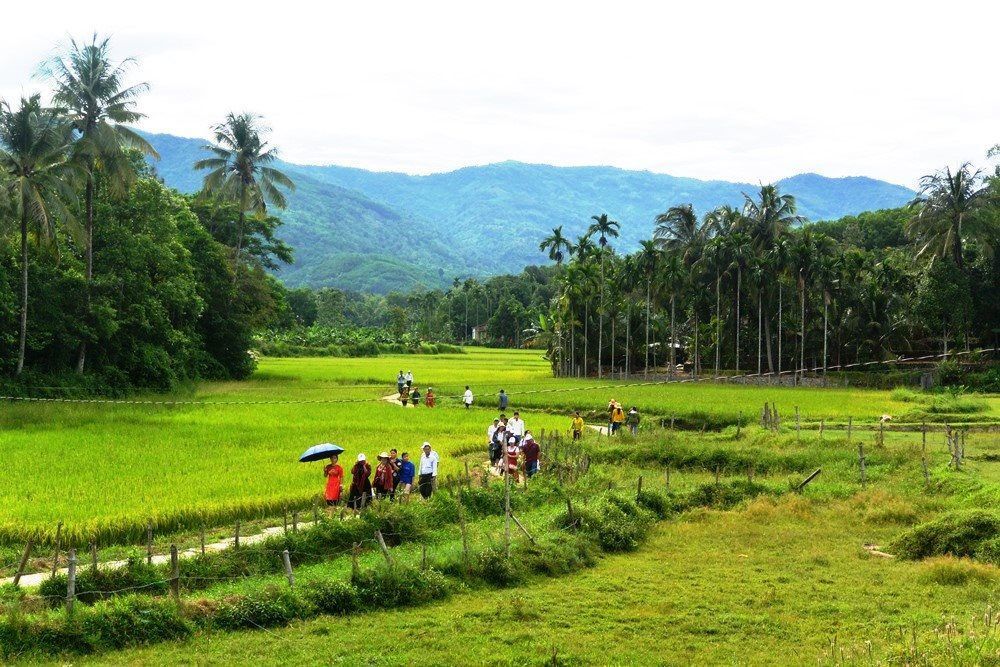 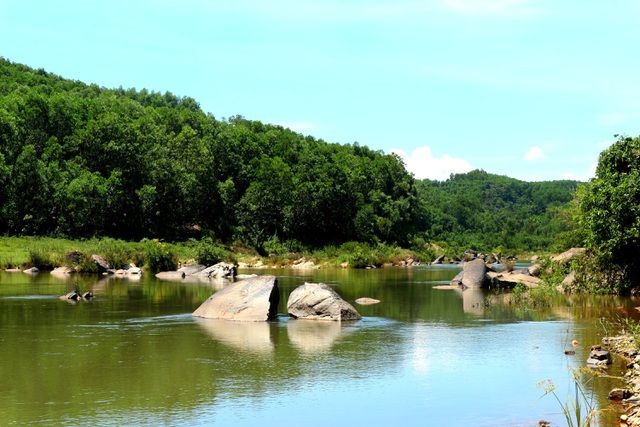 Streams and rocky beaches near the village. Photo: dantri

One noticeable thing is that the houses often lean against the back of the mountain while facing the open rice fields. The locals often build roads and houses on the slightly sloping terrain with straight stone fences; as for high sloping areas, the stone roads are zigzagged to reduce the level of steepness, making it easy to travel. 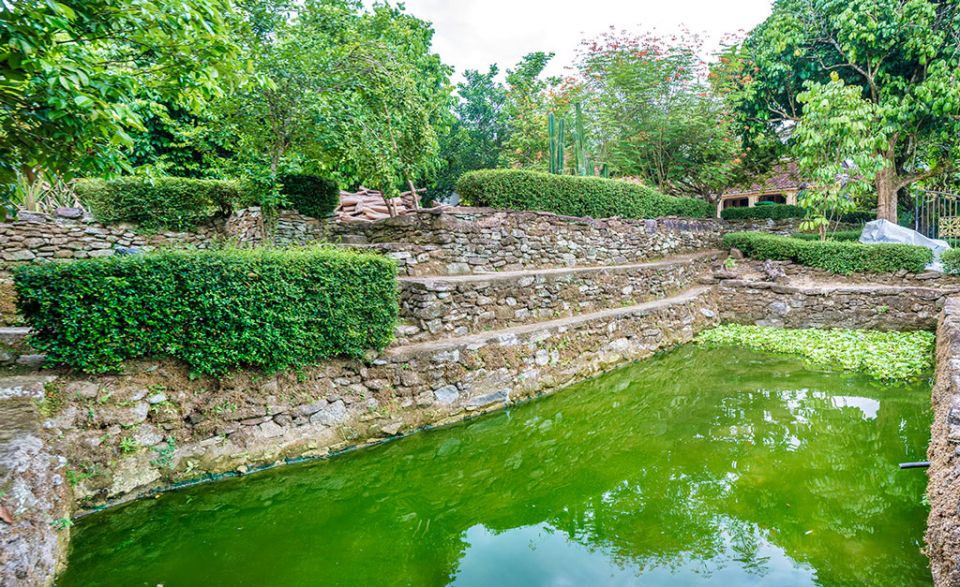 The alleys and fences are made of stone hundreds of years old. Photo: vovdulich

As compared to other ancient villages of Vietnam, the alleys and fences here are made of stone hundreds of years old. Both sides of each alley are straight stone walls with a lot of green moss. According to the locals, to make these stone alleys, the workers have to be very skilled in arranging the stones, thereby creating solidity without the utilisation of any adhesives. On these walls, large and small stones are sophisticatedly placed together. 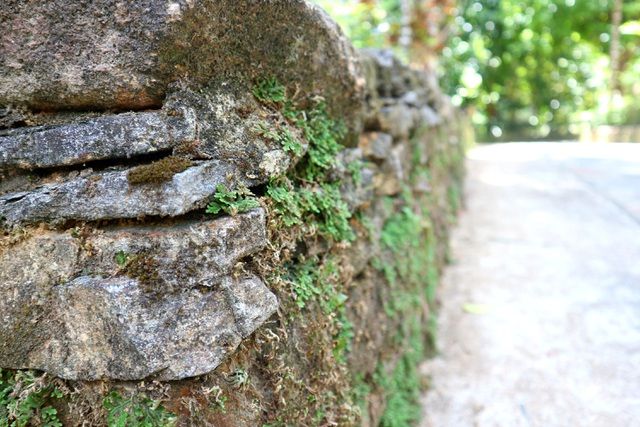 The stone fences and alleys leading to each house with various layers are the "artworks" of each household, creating the unique beauty of the entire village. When spring comes, the moss grows well and covers the rocks, creating a “green carpet” sparkling in the sun. 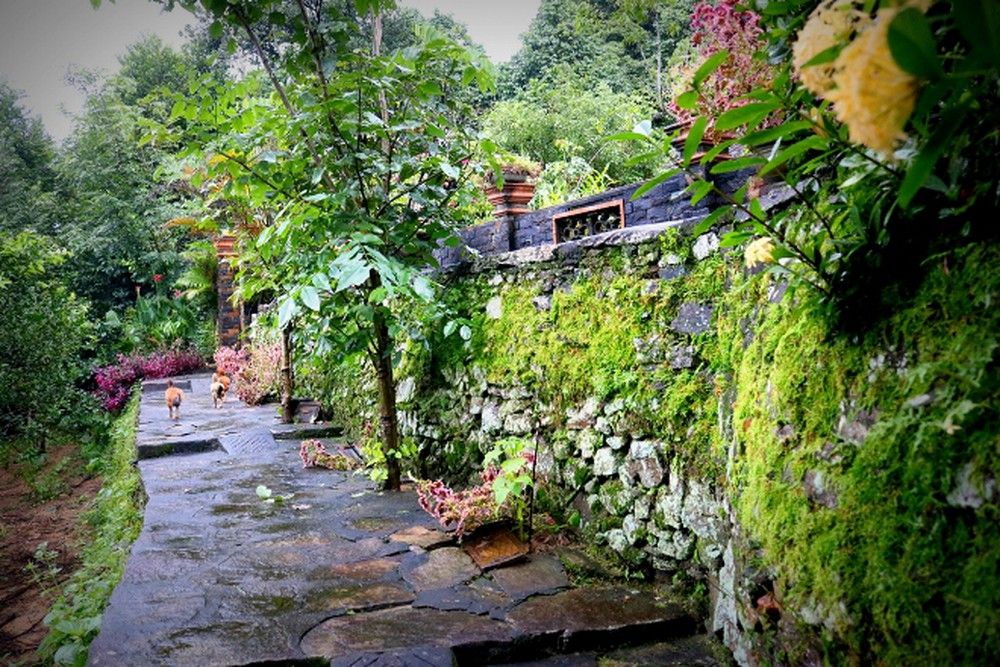 The mossy stone fences in the ancient village of Loc Yen. Photo: baomoi

This village is still preserving eight houses with ancient architecture dating back to 100-150 years in the style of “3 gian 2 chai” (three main compartments and two small rooms). The Saigon President Ngo Dinh Diem attempted to buy the largest house (which is 200 years old) many times, but was unsuccessful. 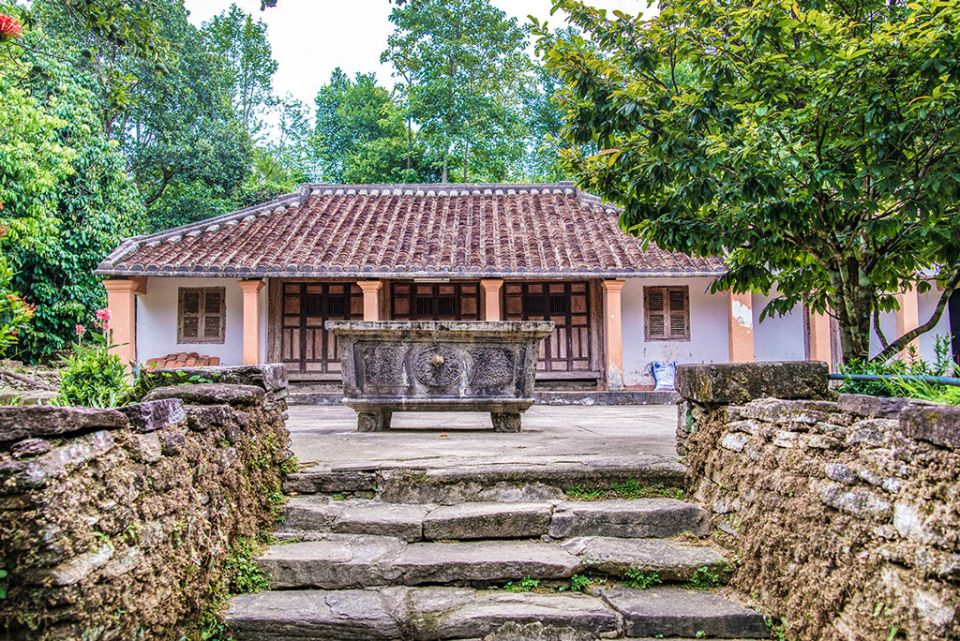 An old house in the ancient village of Loc Yen. Photo: vovdulich

The houses in Loc Yen have the typical “garden house architecture” of Southern Vietnam, which are all made from jackfruit wood - a fruit tree mainly planted in the countryside of Tien Phuoc. In order to embellish the scenery, the locals built gardens and planted some specialty trees that both have economic value while creating beautiful landscapes for the village such as areca, cinnamon, pepper, and tea. 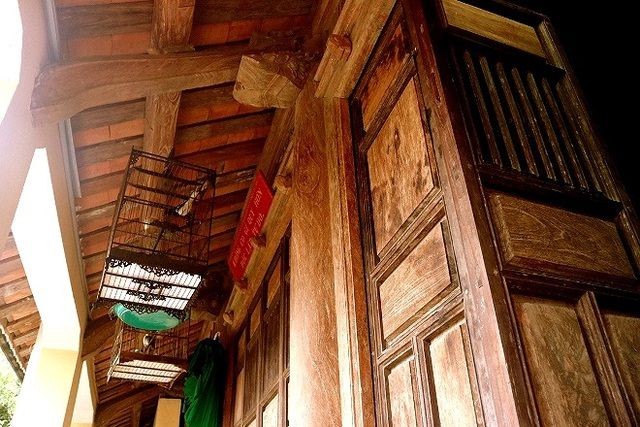 The locals grow a lot of Chinese tea around the village. In addition to serving the needs of life, this plant is considered as a “decorative feature”. Thanks to the skillfulness of the farmers, the rows of Chinese tea are sophisticatedly trimmed to become “green highlights” for the village. 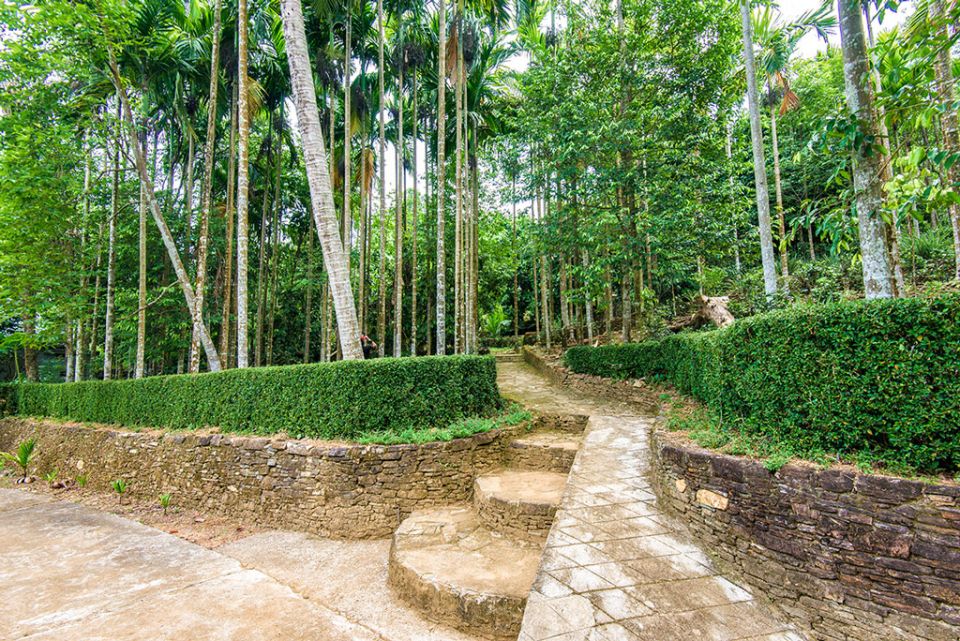 In addition to serving the needs of life, this plant is considered as a “decorative feature”. Photo: vovdulich

When visiting Loc Yen village in spring, you will be surprised at the budding trees. In the summer, the whole village is covered with the golden colour of the terraced fields along with the white milky flowers all over the space, making it extremely poetic. Meanwhile, in autumn, you will be able to enjoy specialty fruits here. 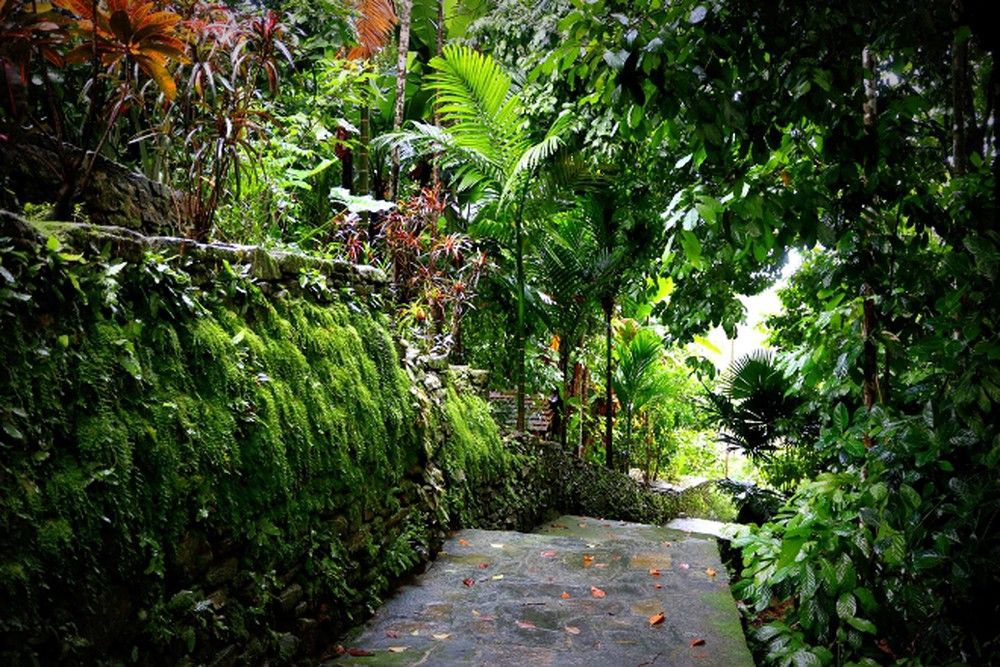 In addition to farming, the Loc Yen people also plant a lot of fruit trees. Thanks to the favourable climate and fertile soil, the fruit trees grow well all year round and bear fruit regularly. Some of the typical fruit trees here are: langsat, strawberry, orange, tangerine, pomelo, banana, jackfruit, durian, dragon fruit and mangosteen. It is true that Loc Yen is like an orchard in Southwest Vietnam. 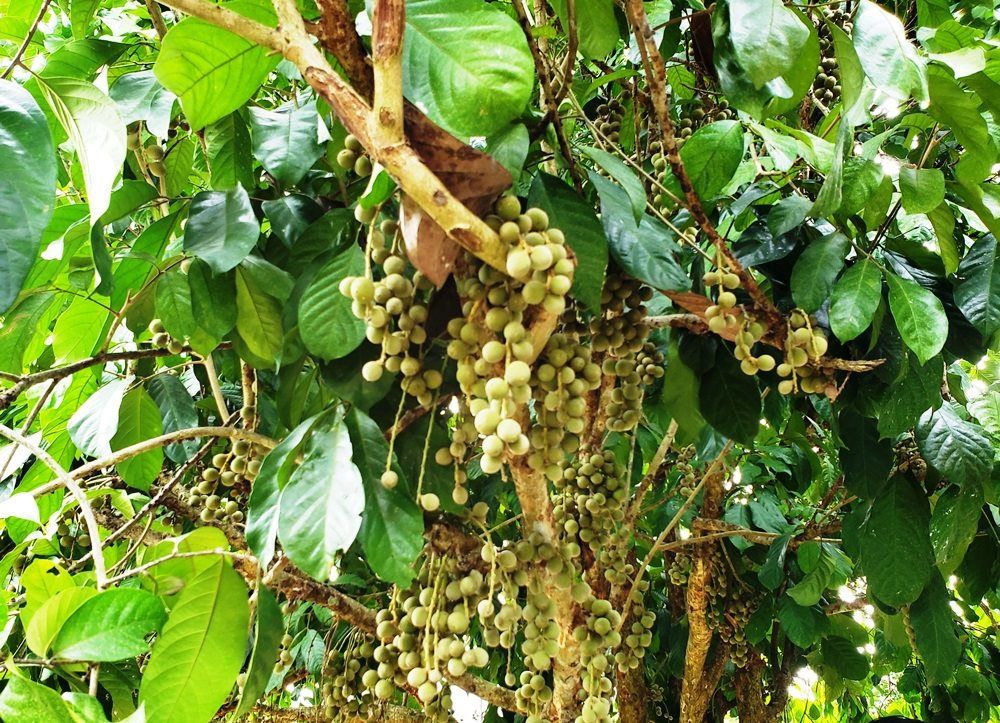 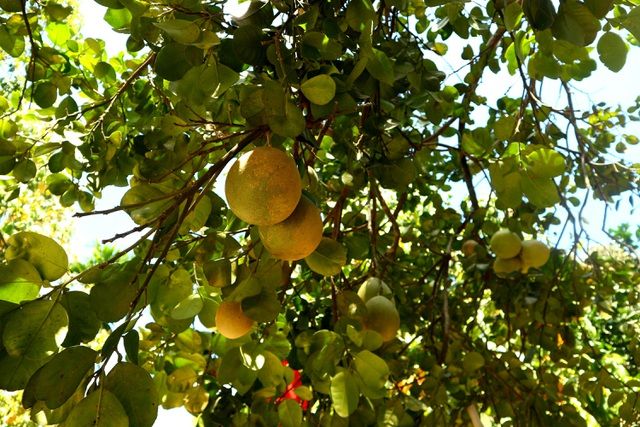 A lot of pomelos on a tree. Photo: dantri

Loc Yen village is gradually developing into the most complete eco-tourism system with the desire to bring the image of the homeland with fields, orchards or old houses featuring Vietnamese architecture closer to the world. Regardless of the hectic life out there, Loc Yen is always peaceful and charming.