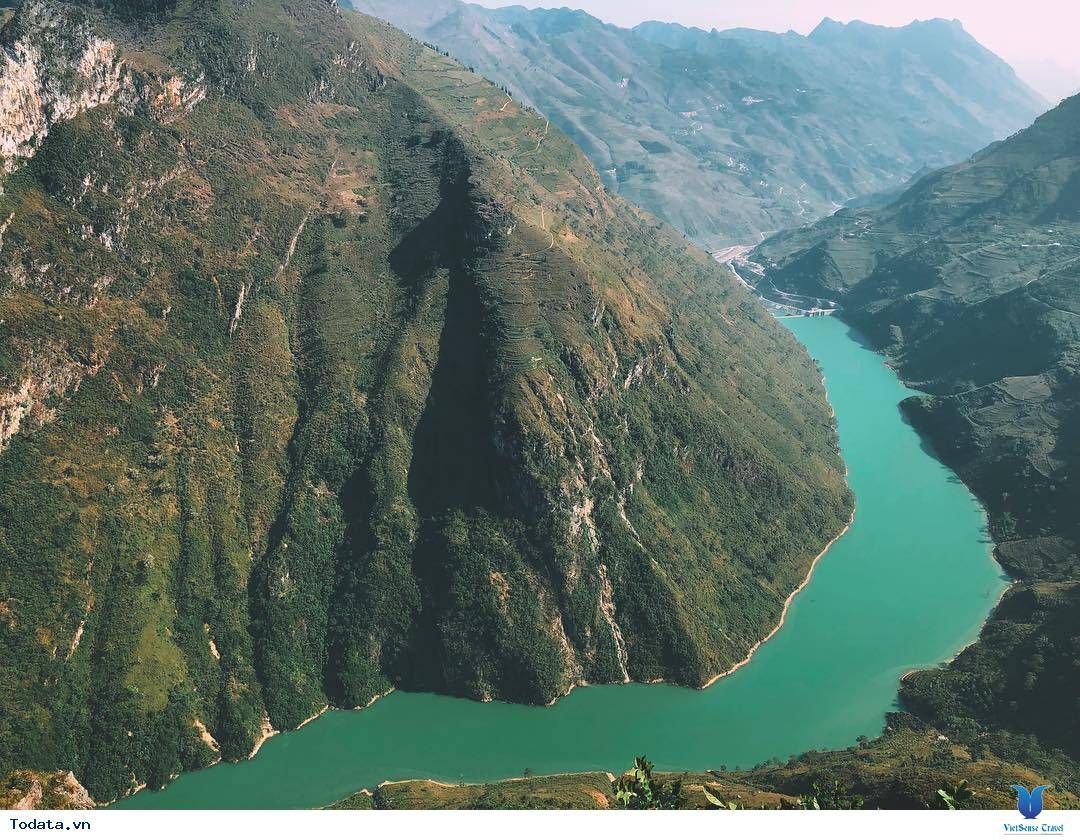 Ha Giang is not only famous for the craggy Ma Pi Leng Pass, but also for the magnificent Tu San - the deepest canyon in Southeast Asia. With unspoiled nature, this place has fascinated many visitors.

After passing Ma Pi Leng - the most dangerous pass in Vietnam, you can admire the beautiful scenery of Tu San canyon. Known as the deepest canyon in Southeast Asia, the place has a cliff height of 600 - 800m, a length of 1.7km and a depth of 700-900m. 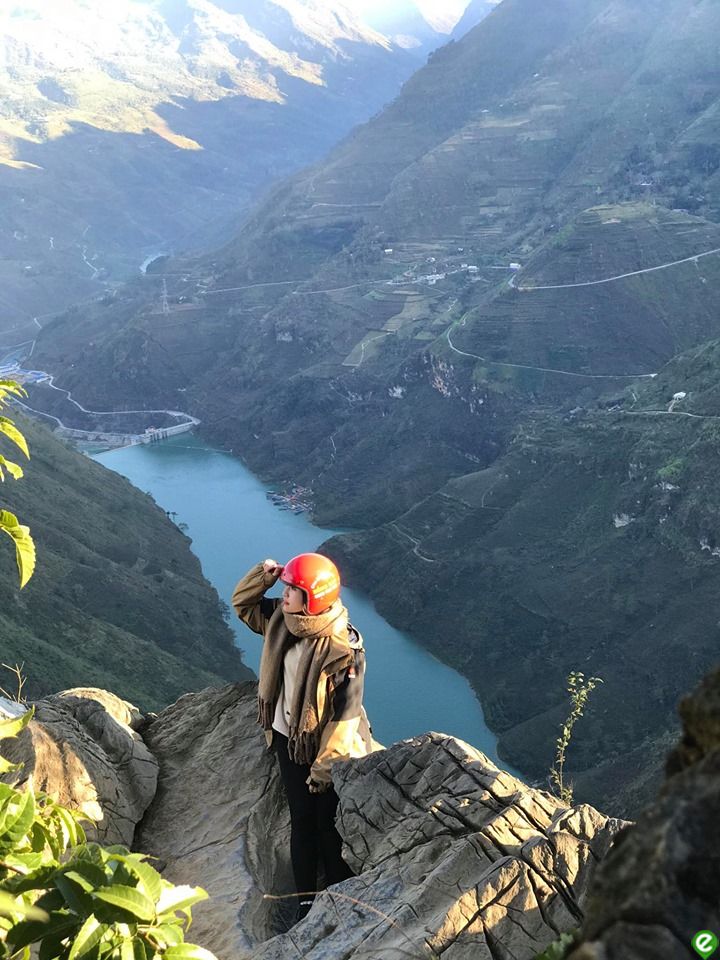 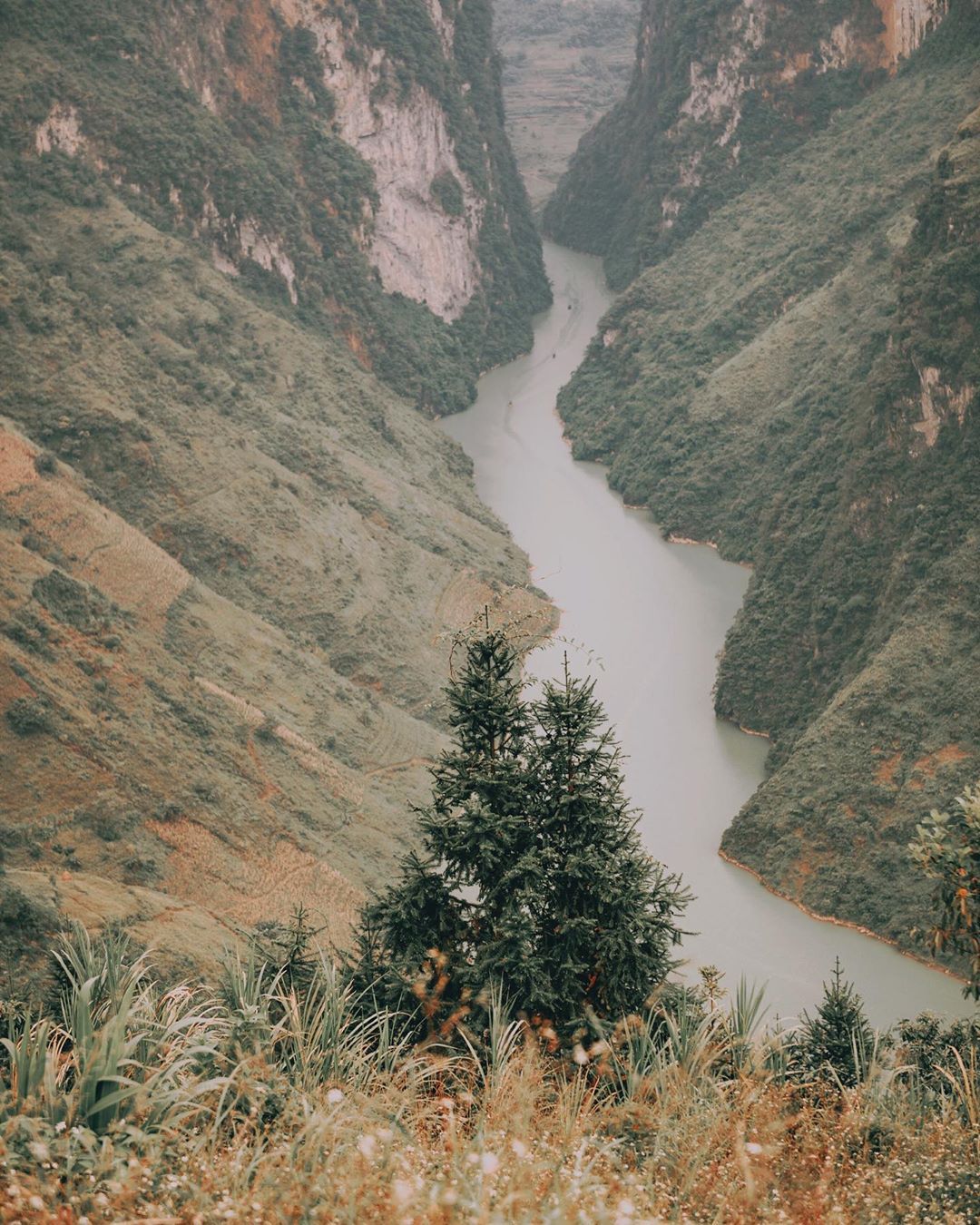 Legend has it that, in the past when heaven and earth were still intact, the water from the peaks of mountains and hills was blocked, leaving one side flooded while the other side suffering from drought. One day, the river god asked the mountain god to move the mountain so that the water could flow through and revive the arid area, but the mountain god did not agree. Therefore, The river god had no choice but to immediately report this matter to heaven and then the Jade Emperor ordered the thunder god to handle it. One day with heavy rain and strong wind, the thunder god hit the mountain hard - the thunder and lightning “broke” the sky and divided the mountain in two, so the water rushed out and created the Nho Que River today. Since then, the blue Nho Que Riverhas flown through the mountains and forests, creating the Ma Pi Leng pass on one side and the Sam Pun (which means “thunder and wind'' in Vietnamese) mountain range on the other side. 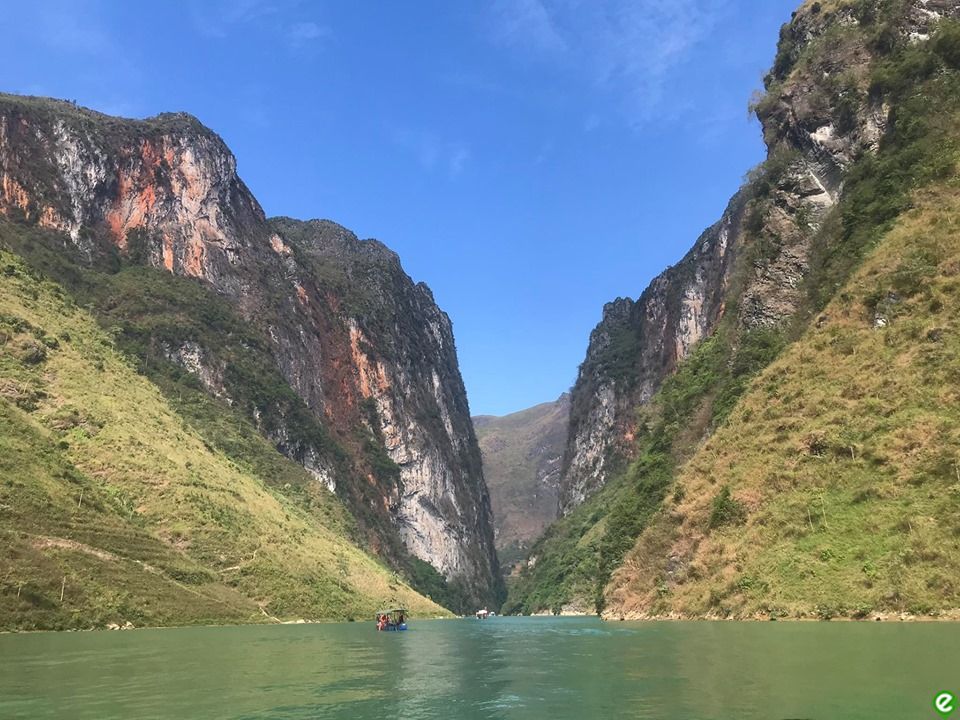 Previously, when Nho Que River was not blocked to make a hydroelectric dam, people could only see Tu San canyon from the top of Ma Pi Leng pass, but currently, you can take a motorboat along this river while admiring the magnificence of the canyon. 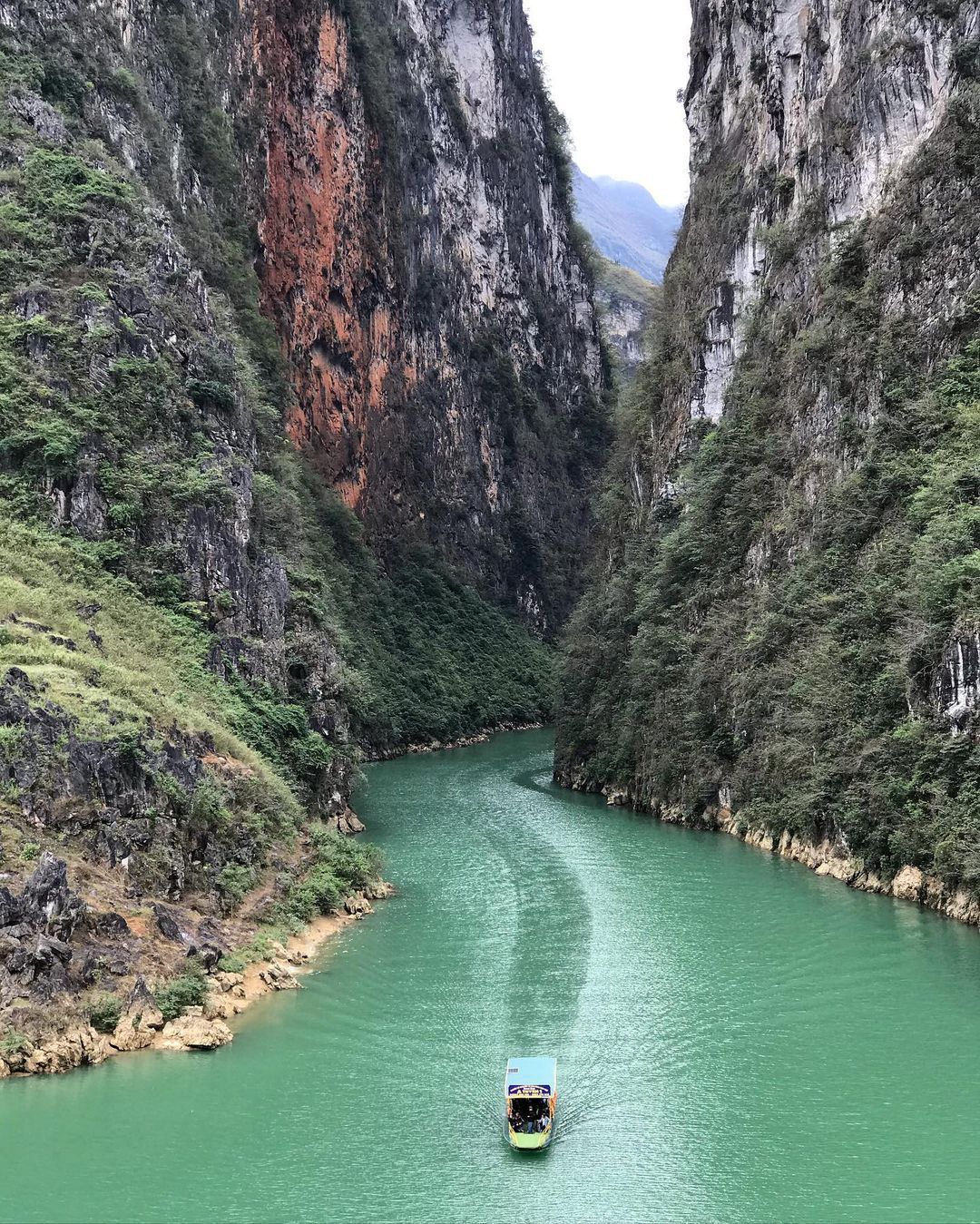 Tu San canyon is like a soft strip of green silk with two steep cliffs on both sides, forming a deep and narrow gap in the middle. When the boat enters Tu San alley, you will find the air extremely cool and fresh. When looking up at the steep cliffs, the majestic scene will definitely make you overwhelmed as the mountain now seems to reach the top of the sky. The surrounding nature changes continuously along your trip with the sound of the wind, the cool air and the echoes in the craggy mountains, all of which will give you a sense of tranquility and being close to nature. 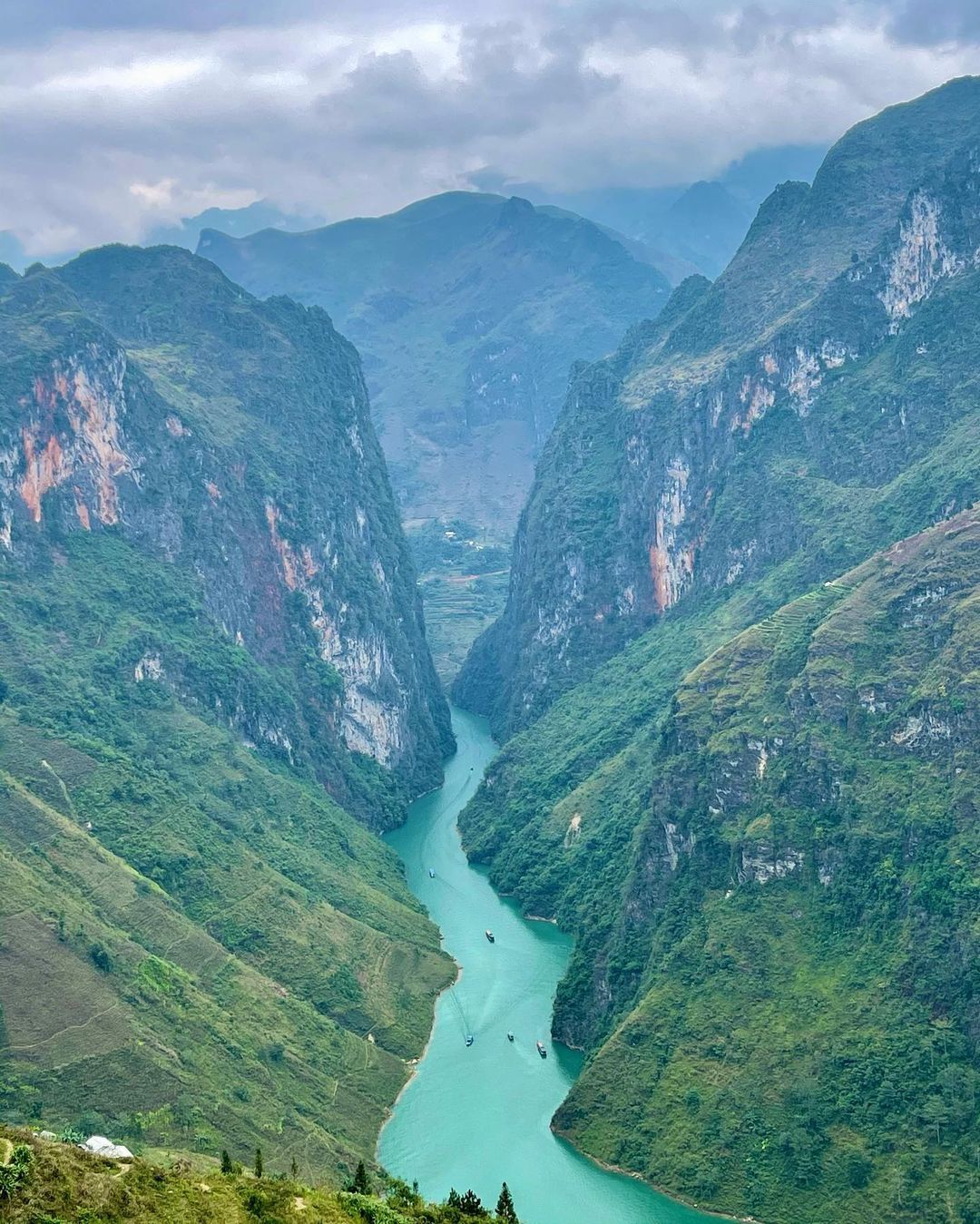 Tu San canyon is like a soft strip of green silk with two steep cliffs on both sides, forming a deep and narrow gap in the middle. Photo: daydreamer.nhpt 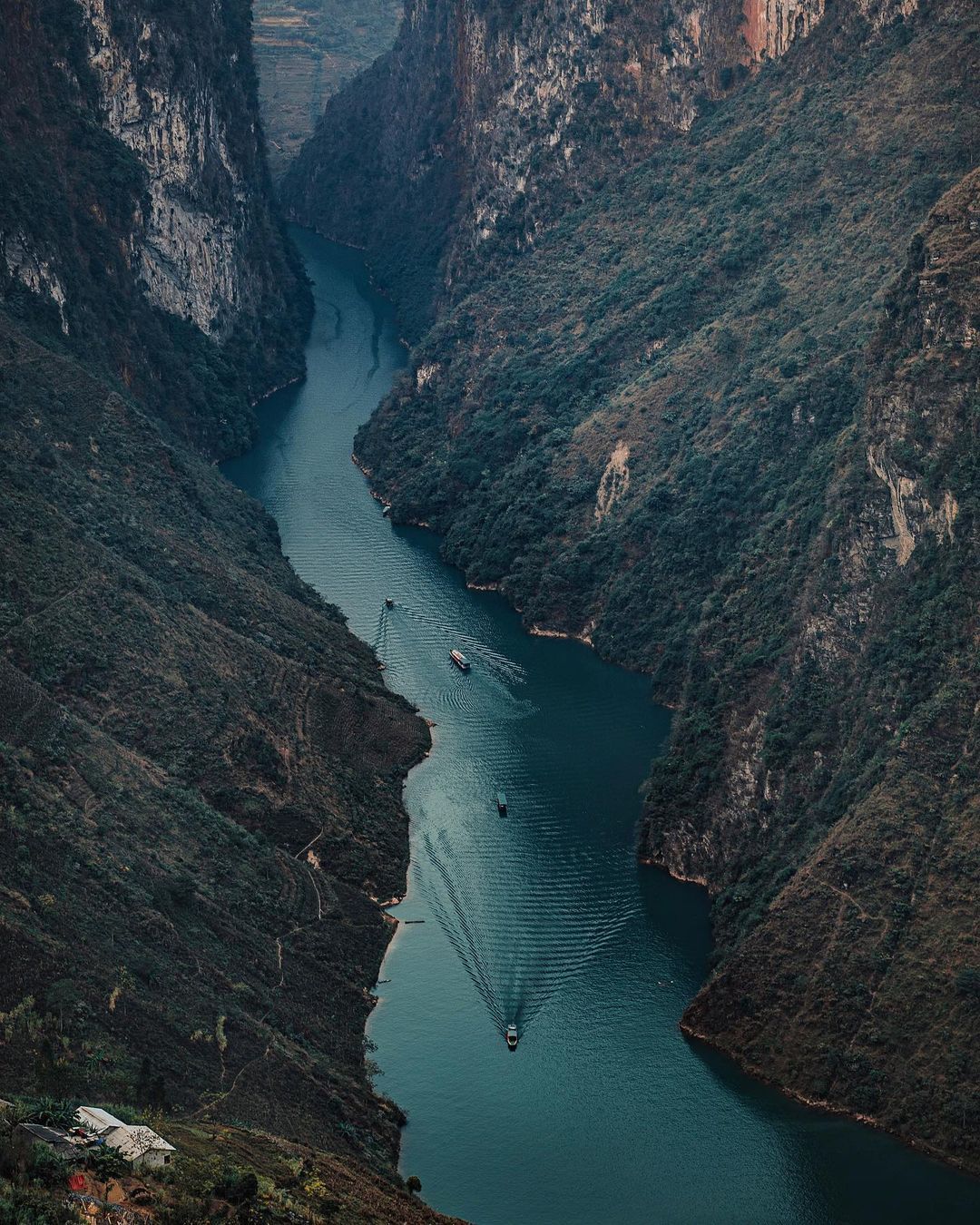 A boat trip along the Nho Que River. Photo: @tibnguyen

Nho Que River has a very special beauty as compared to others as at all times of the year it always has a greenish-blue colour. Nho Que stream originates from Nghiem Son mountain, Yunnan province of China, so when it flows into Vietnam, it forms a section of border between Vietnam and China in the territory of Lung Cu and Ma Le communes. 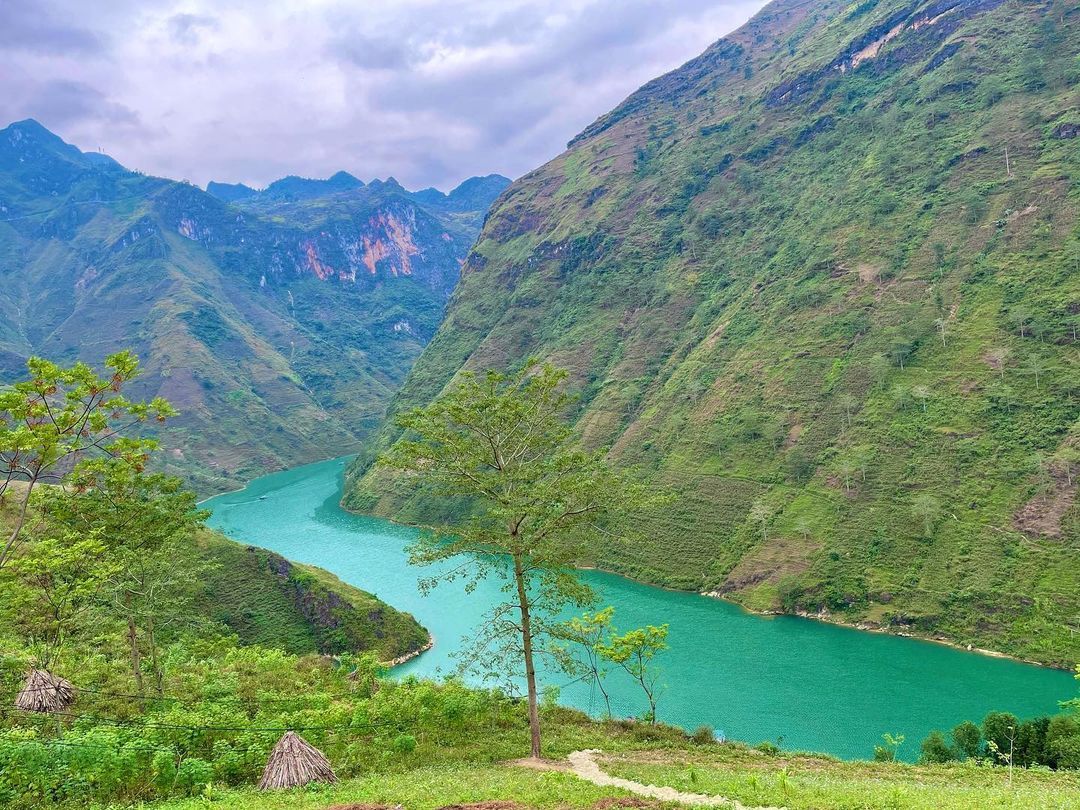 Currently, there are two wharfs, which are the one in Ta Lang village (Pai Lung commune) and the one in Xin Cai commune (Meo Vac district). The ticket price is VND 100,000/person, and each boat can accommodate seven or eight people. Notably, you can even kayak across the river yourself. The boatman will take you on the river for about 30 minutes and when you reach the section of Tu San canyon with two cliffs forming the letter V, they will stop so that you can take pictures. 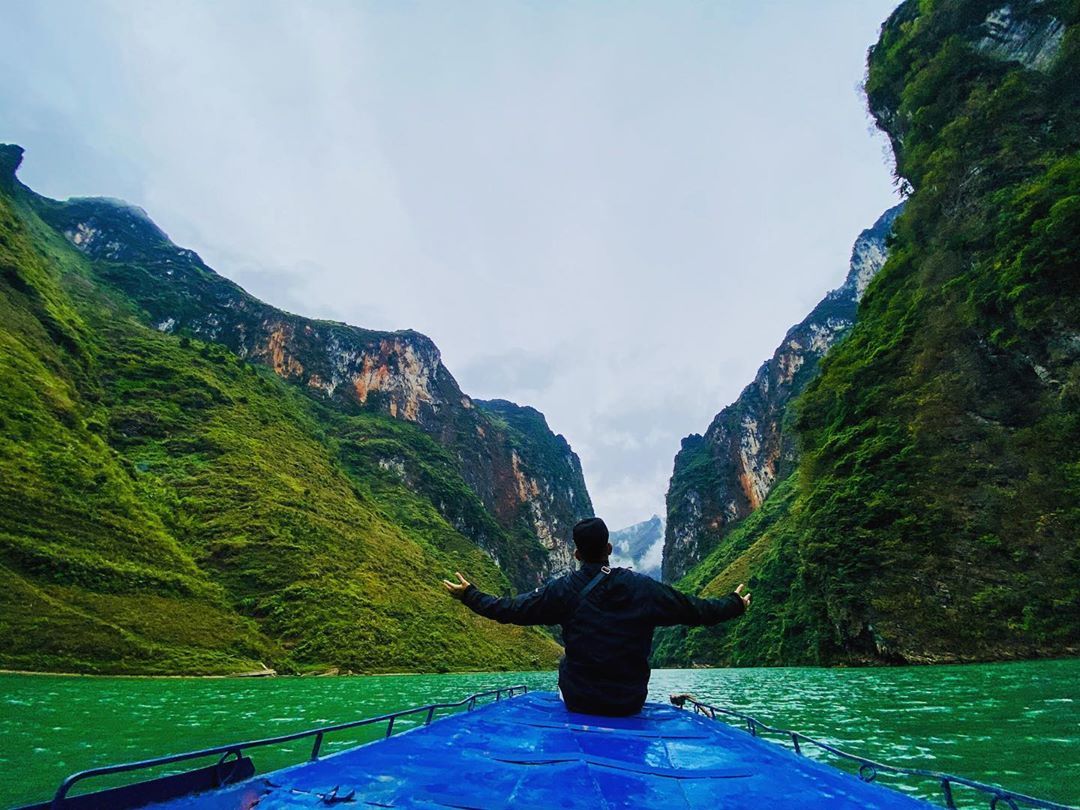 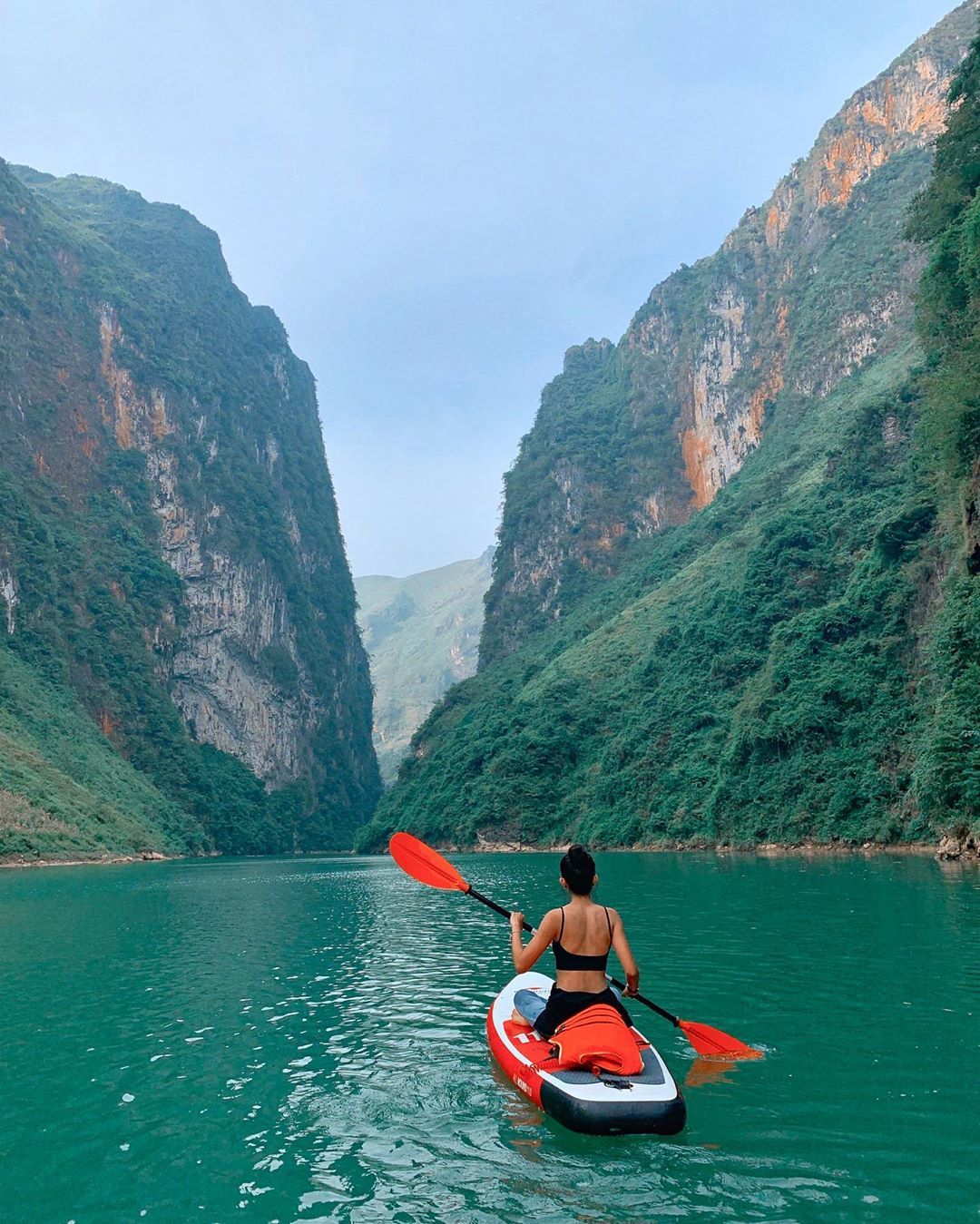 You can kayak on Nho Que River to enjoy the beautiful scenery of Tu San canyon. Photo: @kimthy.xie

The way to Tu San canyon

Most tourists choose to travel by motorbike to “conquer” Tu San canyon due to the dangerous, narrow and craggy roads. There are many shops offering motorbike rental services in Ha Giang with a cost of about VND 180,000/day/vehicle. 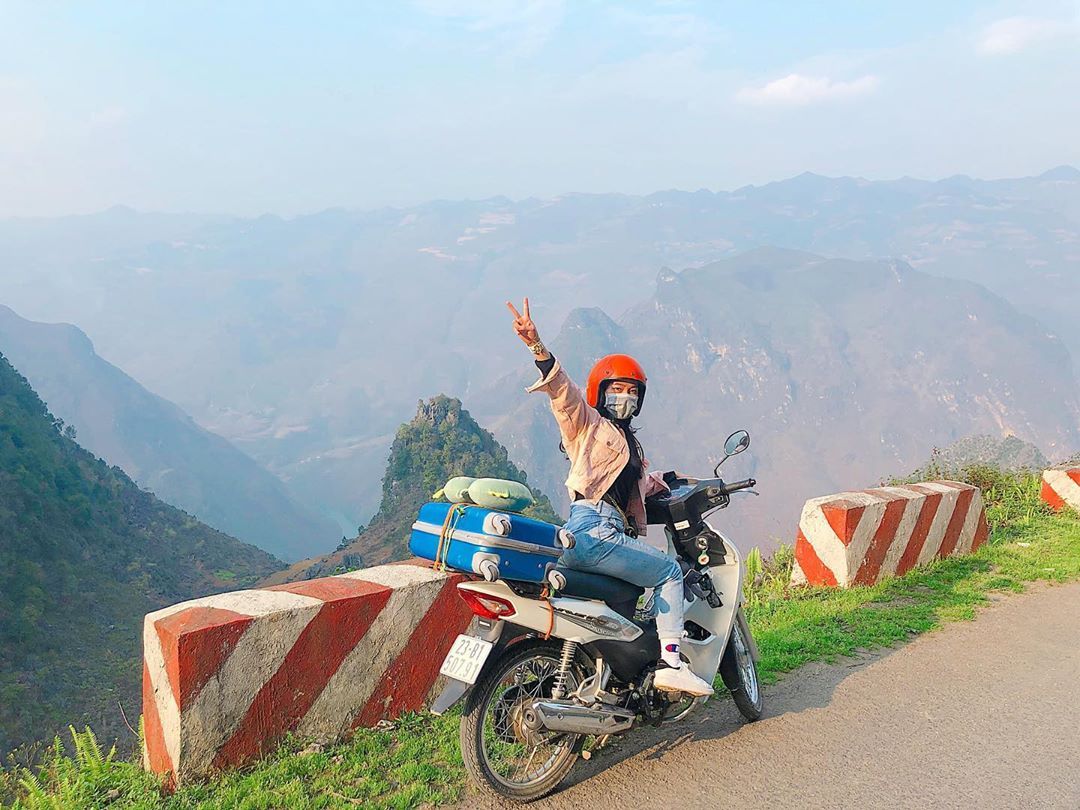 Traveling by motorbike is the best option. Photo: @daoyenn2407

From Ha Giang city center, you can move along Highway 34 to be able to reach the picturesque Ma Pi Leng pass. You can admire the beautiful scenery of Tu San canyon in three ways: 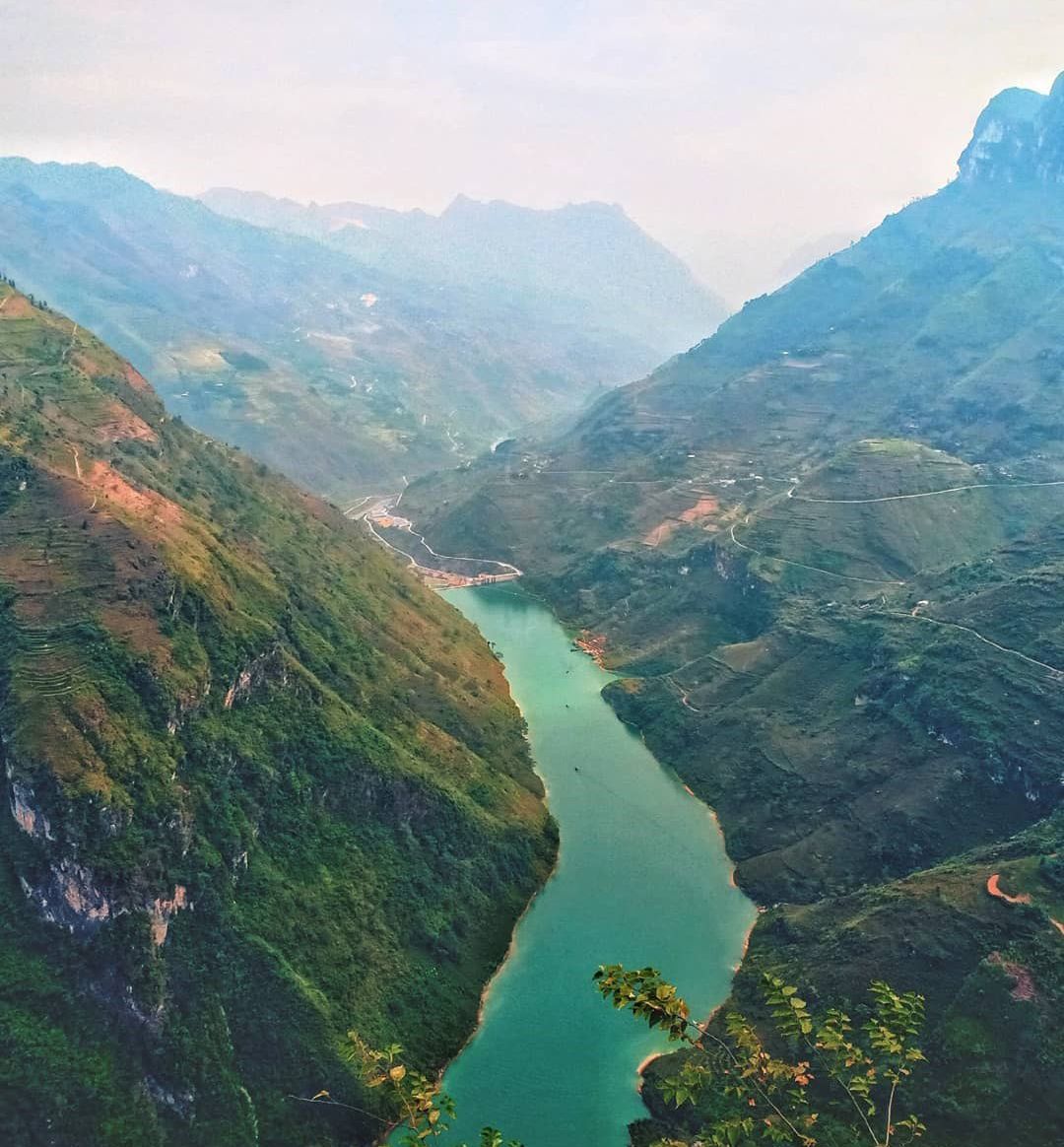 Second: move towards the end of Ma Pi Leng pass to Meo Vac district, then travel through Xin Cai - Son Vi commune and Trang Huong bridge crossing Nho Que River. From here, it takes you about 20 minutes to travel by boat down the river to reach Tu San canyon. 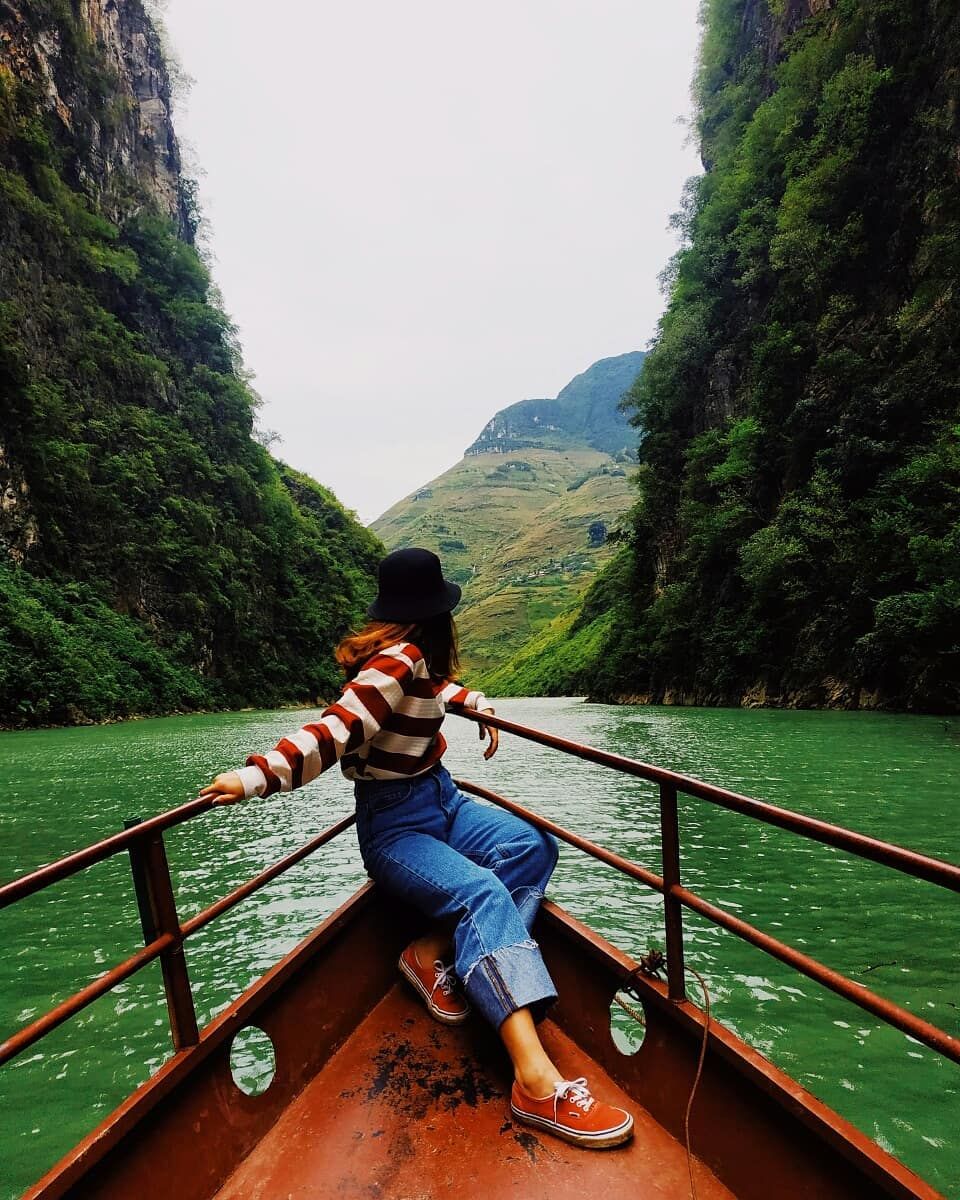 Third: the road from Ma Pi Leng pass to Ta Lang village is suitable for adventurous people. Specifically, it is a winding road where you have to go downhill continuously. In addition, due to various bends, you need to drive slowly and carefully while paying attention to the front and back.

The road is only 12km long, but it can take you up to one hour to get to the village, then you can walk to the wharf. 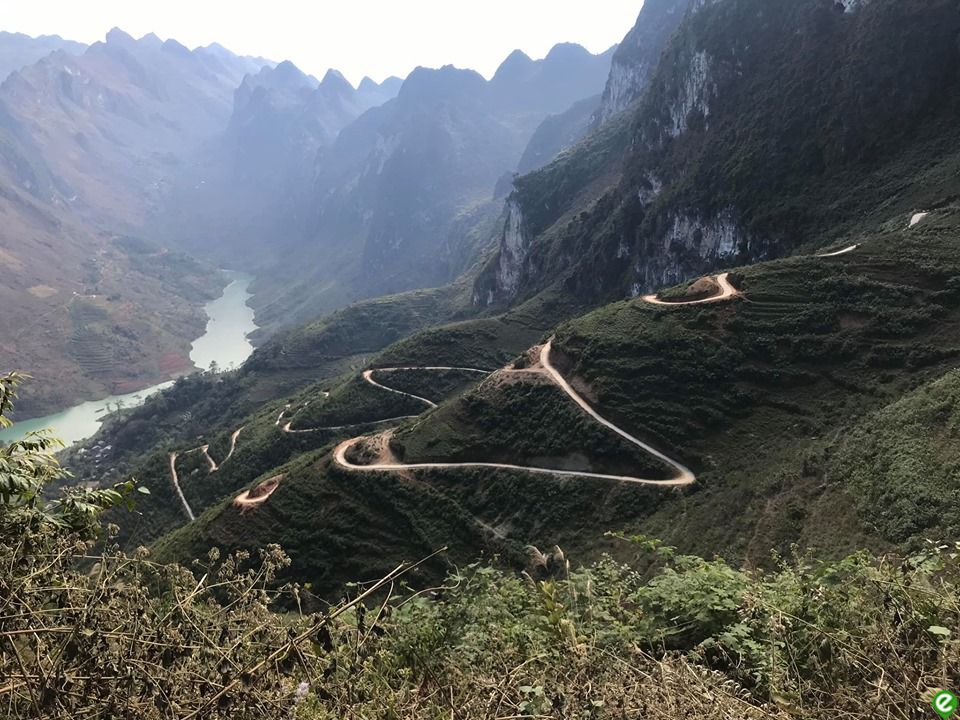 The ideal time to go to Tu San canyon

There are many ideal times throughout the year to explore Tu San canyon.. In the spring, you can travel here in March when the weather in Ha Giang is cool and you can see the bottom of the blue Nho Que River. 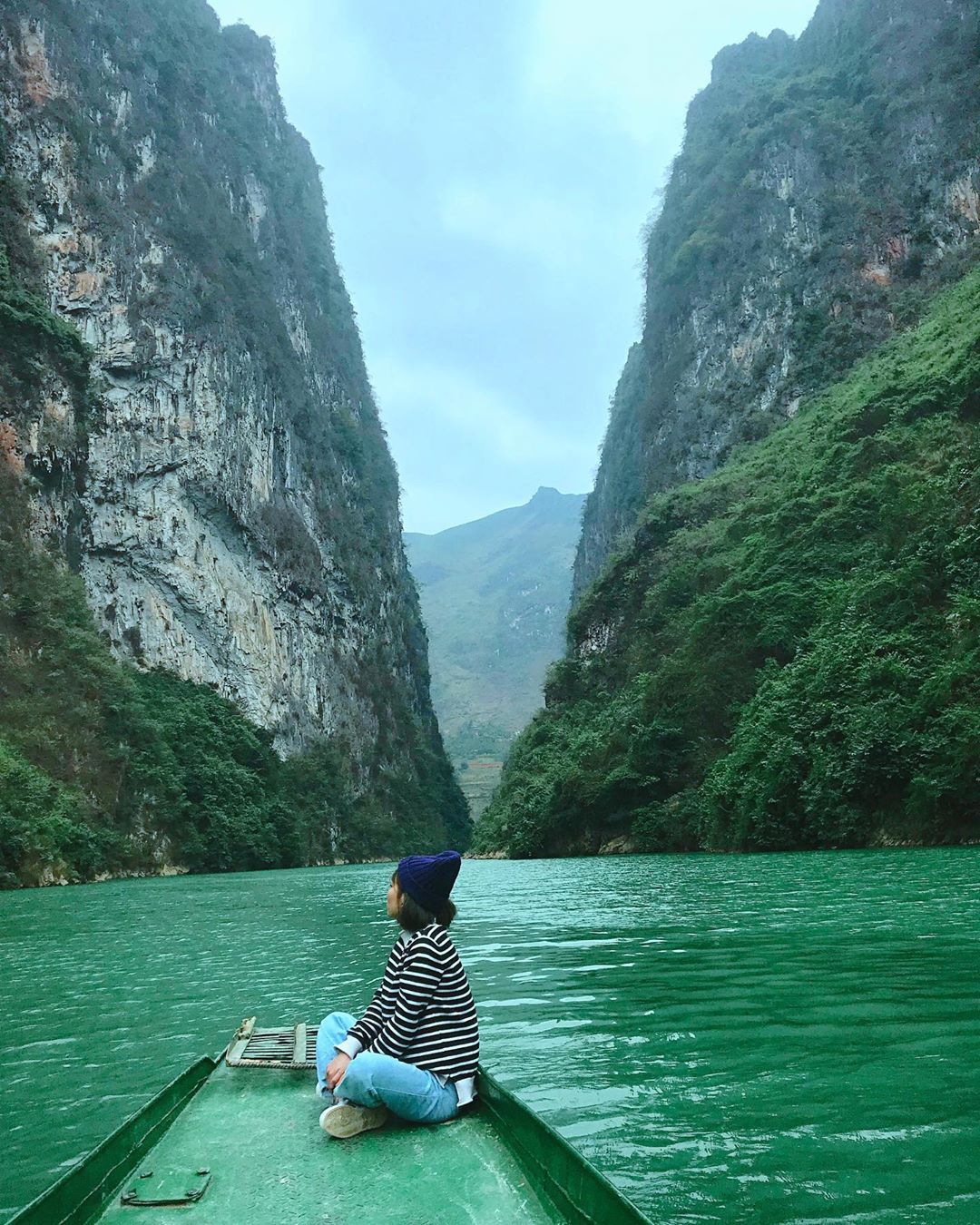 Tu San canyon is an impressive “piece" of the picture of Ha Giang's nature. When coming here, you will be able to enjoy the grandeur, wildness and attractiveness of the deepest canyon in Southeast Asia.